Review of the Week: 2nd–8th August

A sizeable Atlantic depression that tracked slowly eastwards towards and across Britain and Ireland throughout the week produced the majority of the best birds, with a strong passage of large shearwaters around the southwest and Ireland as well as several exciting Nearctic shorebirds popping up nationwide. And, with high pressure beginning to establish itself over us as the week ended, warmer conditions and easterly-based winds suggest that eyes will swing back east in the coming days — yes, autumn is finally here!

Once again, the week's highlights were a couple of high-grade waders. The first was a splendid adult Black-winged Pratincole that turned up at Loch Stiavapat, Lewis (Outer Hebrides) on 2nd. Being typically mobile for the species, this first for the Western Isles occasionally went AWOL but lingered there to 6th. The 41st record for Britain and Ireland, this could feasibly be the Cheshire bird of May — has it been hiding somewhere in the far northwest, away from prying eyes?

Only very slightly upstaged by the pratincole was Britain and Ireland's 45th Stilt Sandpiper. Once again a regional first, it was Northumberland's turn to add a species to its county avifauna as the bird, a moulting adult, touched down on 'Stringer's Scrapes' at Low Newton-by-the-Sea from 5th. Initial panic from local birders was soon relieved, for the bird lingered throughout the following day and to the end of the week — a fine reward for the wonderful effort that has gone in to the creation of this site in recent years. 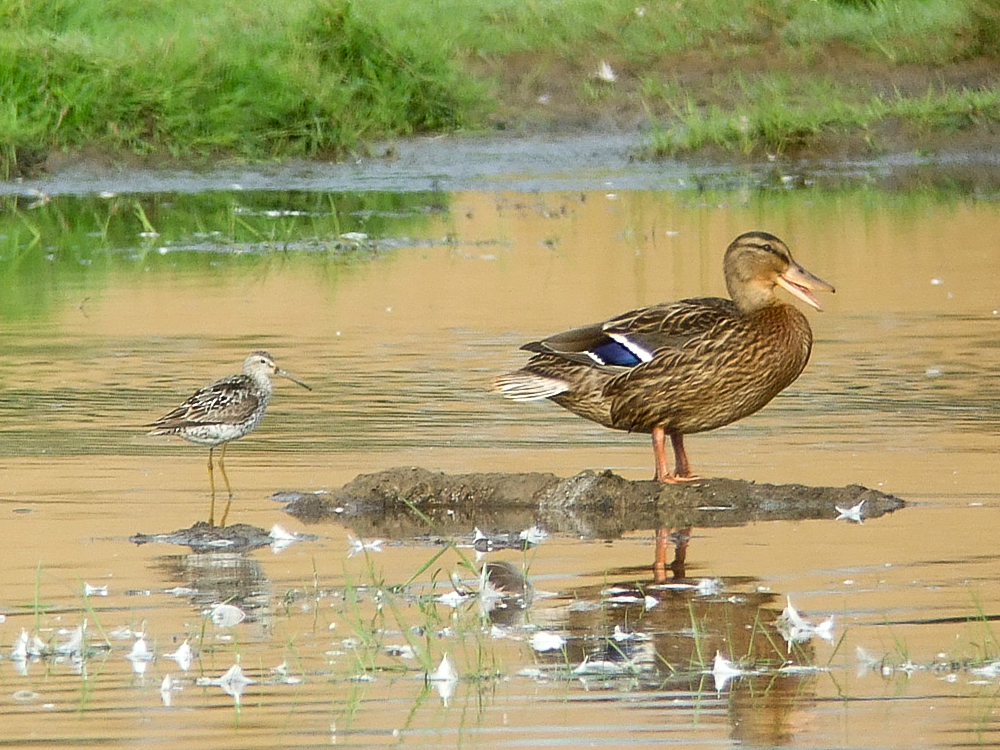 One of the main talking points of the week was a fine movement of Cory's Shearwaters on 2nd–3rd, the bulk of the passage rather predictably passing headlands in southwest Cork. Over 1,000 birds passed Galley Head during the afternoon and evening of 2nd, and 334 were also noted past Cape Clear and 277 past Ballycotton. As is so often the case, the passage dried up further east along the south Irish coastline: Ram Head (Waterford) registered 103 and Helvick Head amassed 'just' 62. Nevertheless, passage was still happening the following morning as Galley clocked a further 310 by 9:45am on 3rd and 154 in four hours that evening — just how many more must have passed throughout the day is anyone's guess. Also in the county, Seven Heads registered 267 by late morning while the first birds also began to arrive in southwest England — 115 passed Porthgwarra (Cornwall) and 120 were seen off St. Agnes (Scilly) in just one hour that evening. Dregs of the passage reached as far east as Berry Head (Devon) on 4th and Abbotsbury (Dorset) on 5th but, yet again, a major passage failed to materialize away from the southwestern extremities. 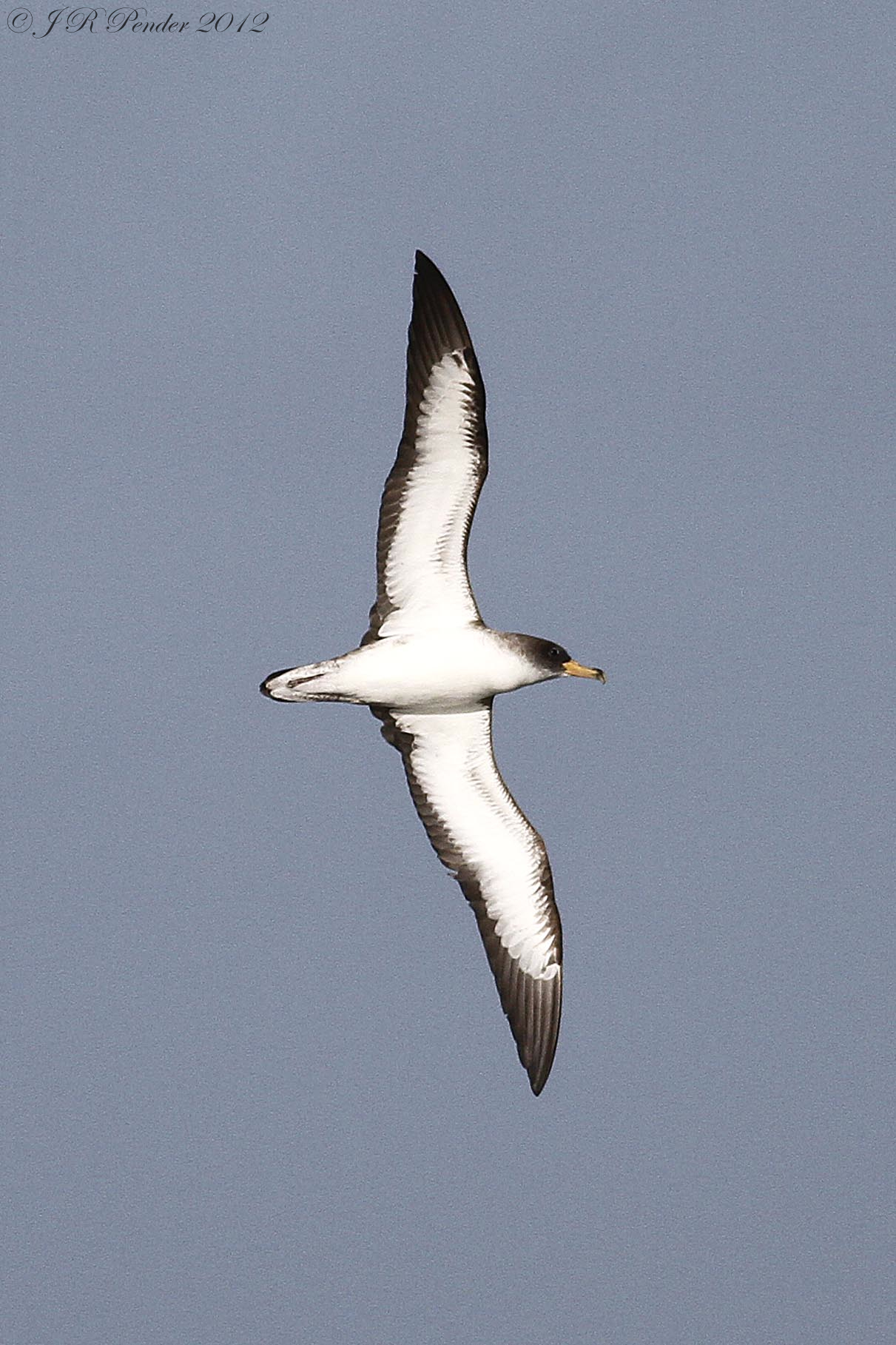 Smaller numbers of Great Shearwaters were noted, with a peak of 60 past the Old Head of Kinsale (Cork) on 3rd. A pelagic out of Dingle (Kerry) on 5th failed to locate any large shearwaters whatsoever, although a Grey Phalarope was noted. Scilly pelagics typically fared better, with small numbers of both Great and Cory's Shearwaters providing quality backup to the only two Wilson's Storm-petrels of the week on 2nd. Sabine's Gulls included several birds seen from boats in The Minch (Highland) throughout the week, and a showy bird was at Dungeness (Kent) on 5th after earlier being seen at Rye Harbour (E Sussex). Finally, there were reports of a Fea's Petrel past Clogher Head (Louth) and a Little Shearwater past Flamborough Head (E Yorks), both on 4th. 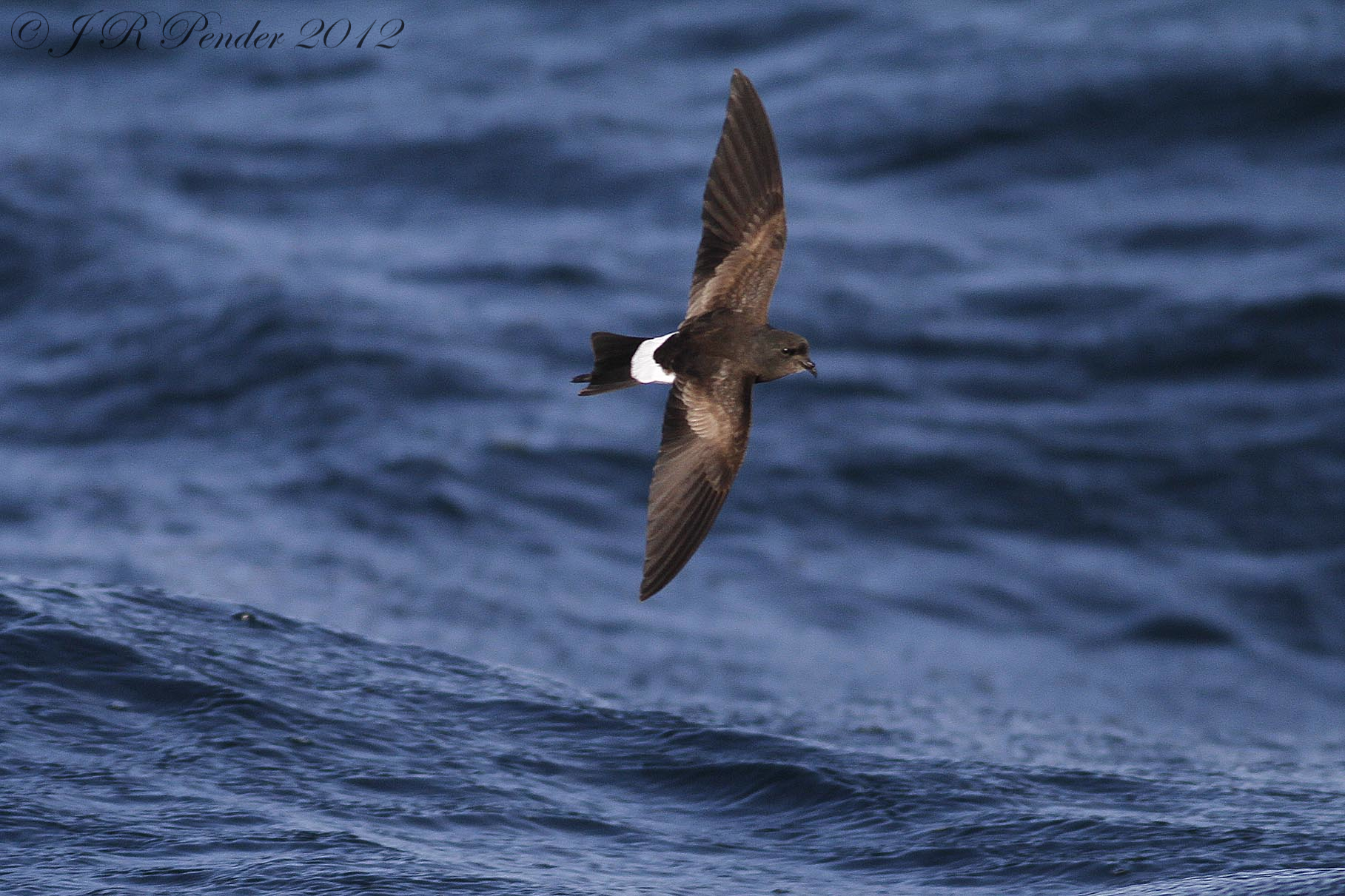 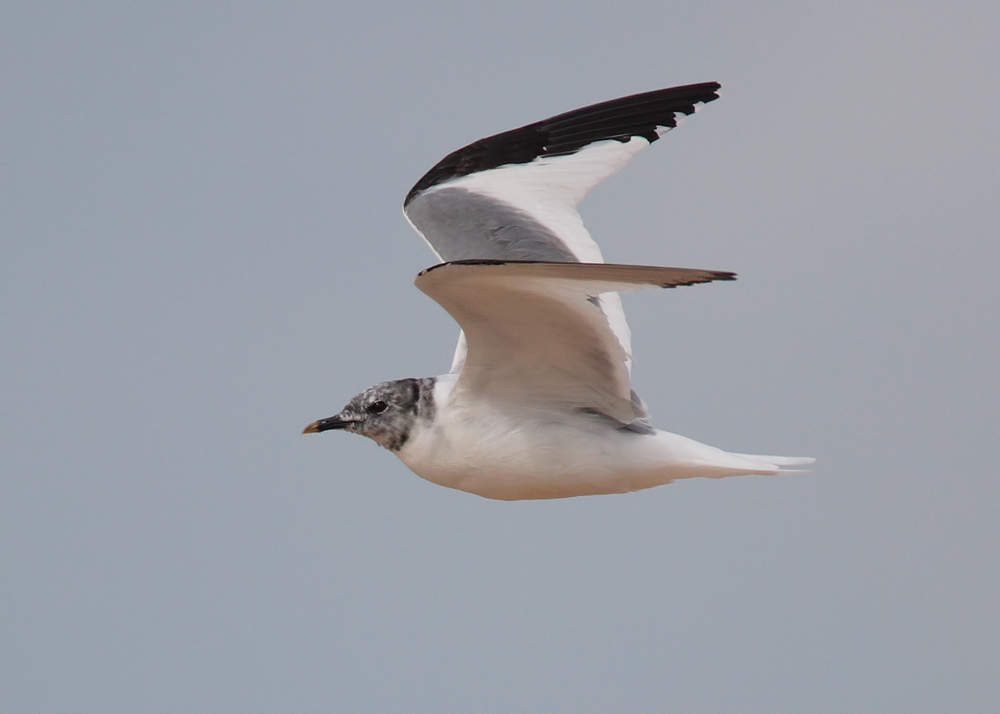 Also presumably associated with the arriving low-pressure system was an adult Spotted Sandpiper on the beach at Ballinclamper (Waterford) during the evening of 5th; an adult White-rumped Sandpiper was also in the county, at The Cunnigar on 4th–6th. Another White-rump graced Tiree (Argyll) on 6th in addition to the lingering bird still at Tyninghame Bay (Lothian) to 4th and a fourth again at Snettisham (Norfolk) on 5th. Ten Pectoral Sandpipers included two at Earith Washes (Cambs) on 3rd, with new birds in Cornwall (Walmsley Sanctuary on 2nd and Carnsew Basin on 8th), Wexford (Tacumshin on 6th), West Midlands (Marsh Lane on 5th), Suffolk (Minsmere on 8th) and East Yorkshire (over Spurn on 3rd) in addition to lingerers in Durham and Kent. Just for good measure, the moulting Long-billed Dowitcher continued at Slimbridge (Glos) throughout. 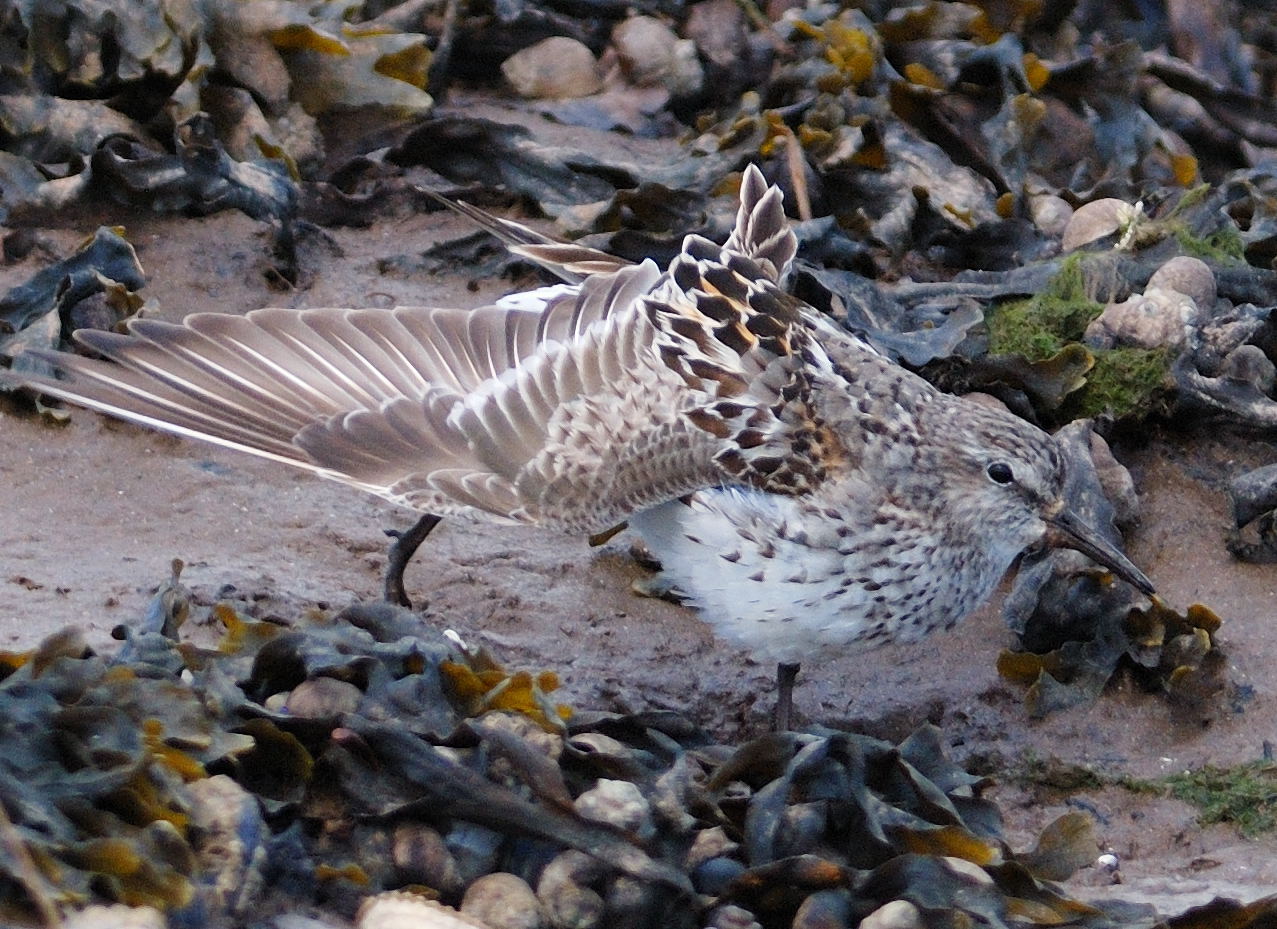 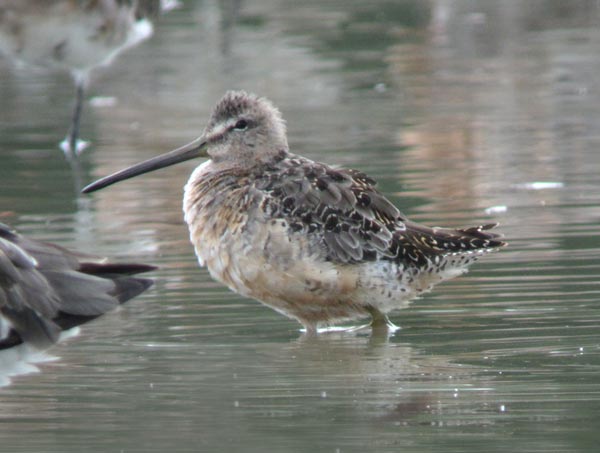 The appearance of two female Blue-winged Teal at Wexford Wildfowl Reserve on 6th provided further evidence that birds had arrived on the week's system — perhaps this is a promising sign for another westerly-dominated autumn, although it is of course too early to say for sure. Other wildfowl highlights included the lingering Ferruginous Ducks at Blagdon Lake (Somerset) and Minsmere (Suffolk), two Scottish Surf Scoters — a female off Blackdog (Aberdeenshire) on 5th and a drake off Lunan Bay (Angus/Dundee) on 8th — and the lightest of scatterings of Ruddy Shelducks.

In Cambridgeshire, the often showy adult Purple Heron continued at Sutton Gault until 6th, while the elusive juvenile was still being seen sporadically at Stodmarsh (Kent) to 7th. Given its secretive nature, it was perhaps no surprise that Hampshire's adult Night Heron of June was again found lurking among dense willows on the fishing ponds at Pennington on 3rd, where it continued to be seen until the end of the week. In addition to three still at Meare Heath (Somerset) on 5th, Great White Egrets included a popular bird at Camp Lane Pools (Worcs) from 3rd, a fly-by at Frinton-on-Sea (Essex) on 7th and the long-stayer at Burton Mere Wetlands (Cheshire) on 8th. 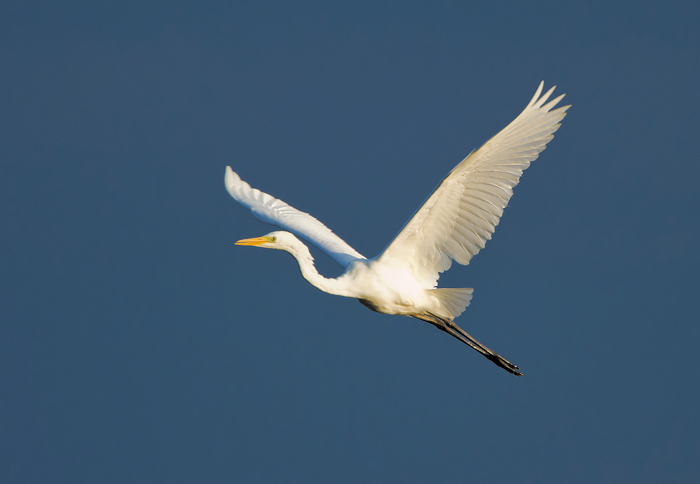 The only White Stork report of the week concerned a single individual over West Loch Tarbert (Argyll) on 5th, while Glossy Ibises remained faithful to their favoured sites in Cork, Wexford, Pembrokeshire and Essex.

In Donegal, the male Snowy Owl was still on Arranmore Island to 2nd at least, and the summering Montagu's Harrier in Wexford continued at Tacumshin. Small numbers of Honey Buzzards were still on the move in England this week — presumably they are failed breeders? 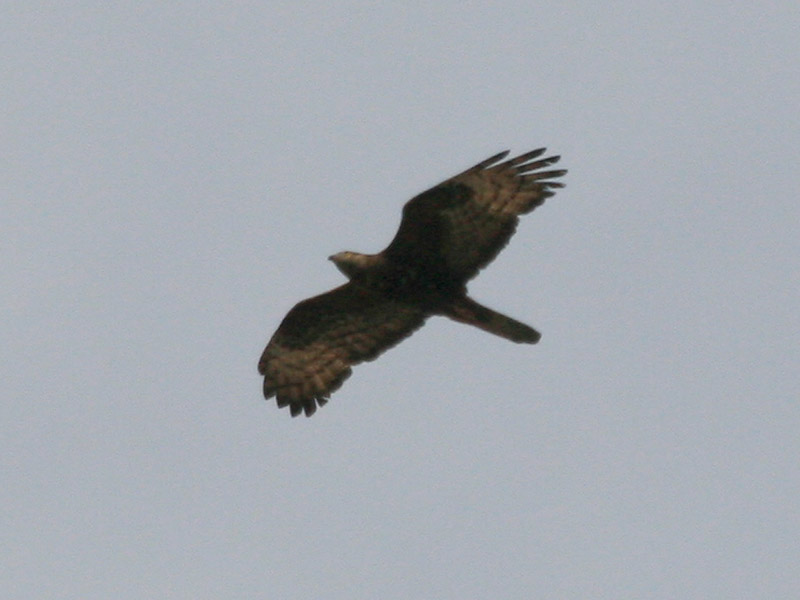 Last week's rather fine adult Bonaparte's Gull on the Add Estuary (Argyll) continued to delight small numbers of visitors there to 5th. Although most British and Irish birders are regularly afforded the opportunity to see a 'Boner', most individuals are winter-plumaged adults or first-years, so the chance to see a full-hooded summer lovely is not something to be passed on lightly. Another adult, this time in winter plumage, was reported from Eastbourne (E Sussex) on 4th–6th while, over in Ireland, Ring-billed Gulls comprised an adult back at Nimmo's Pier (Galway) on 4th in addition to the long-staying Groomsport (Down) individual. 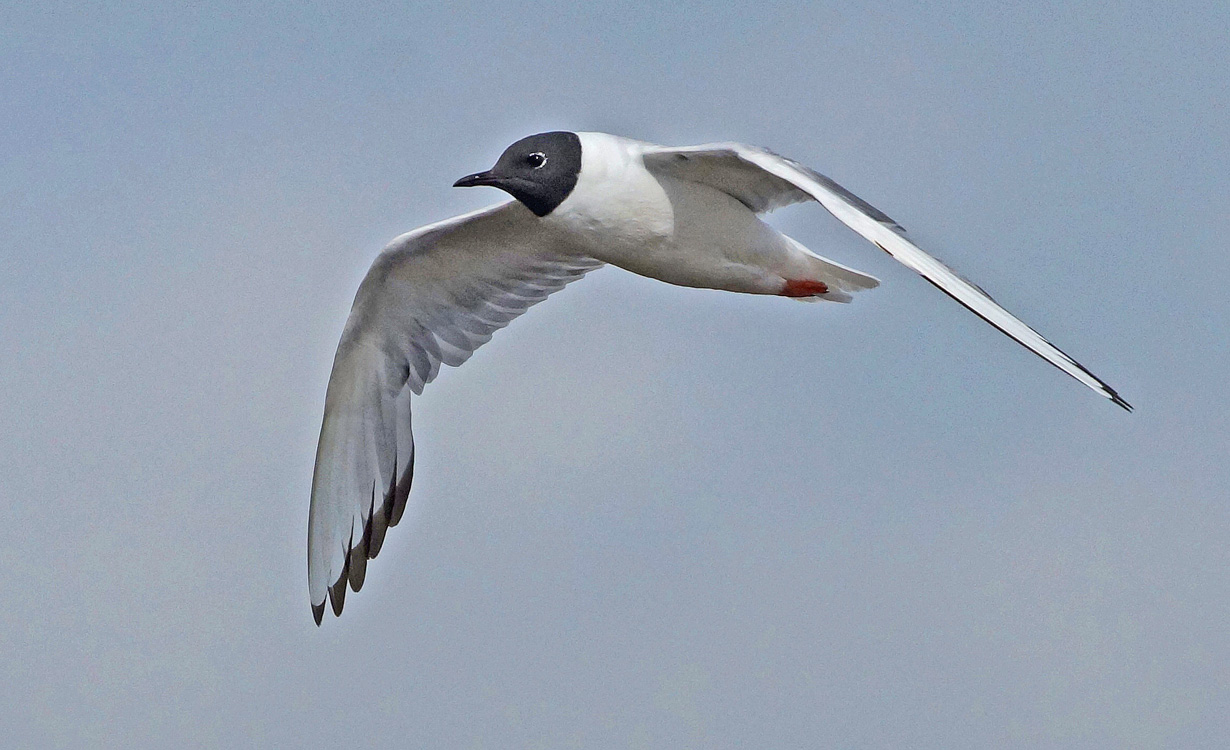 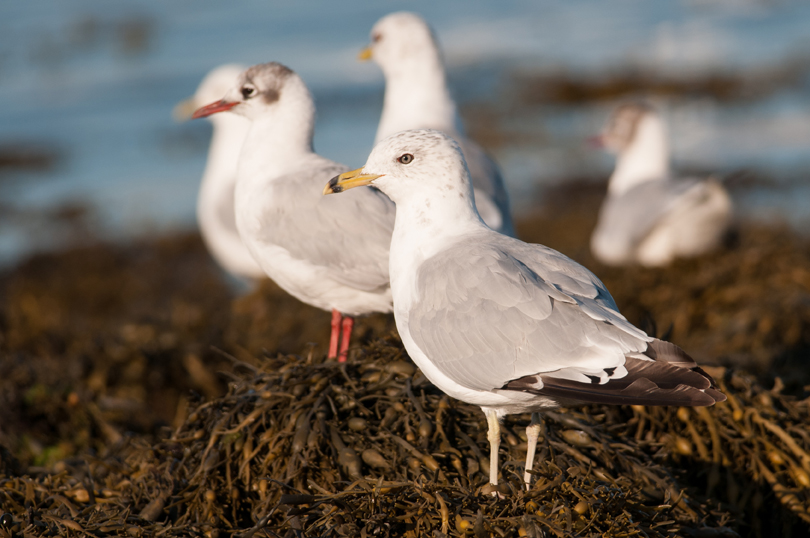 One of the more popular fixes this week was an adult Gull-billed Tern on the Dyfi Estuary at Ynyslas (Ceredigion) from 2nd. Its appearances among the local Sandwich Terns were predominately tide-based, but it did show well on several occasions until 6th despite going missing for long periods. Last week's mini-influx of White-winged Black Terns was not repeated, although the popular Saltholme (Cleveland) individual lingered to 2nd and another flew west past Garretstown (Cork) on 4th. 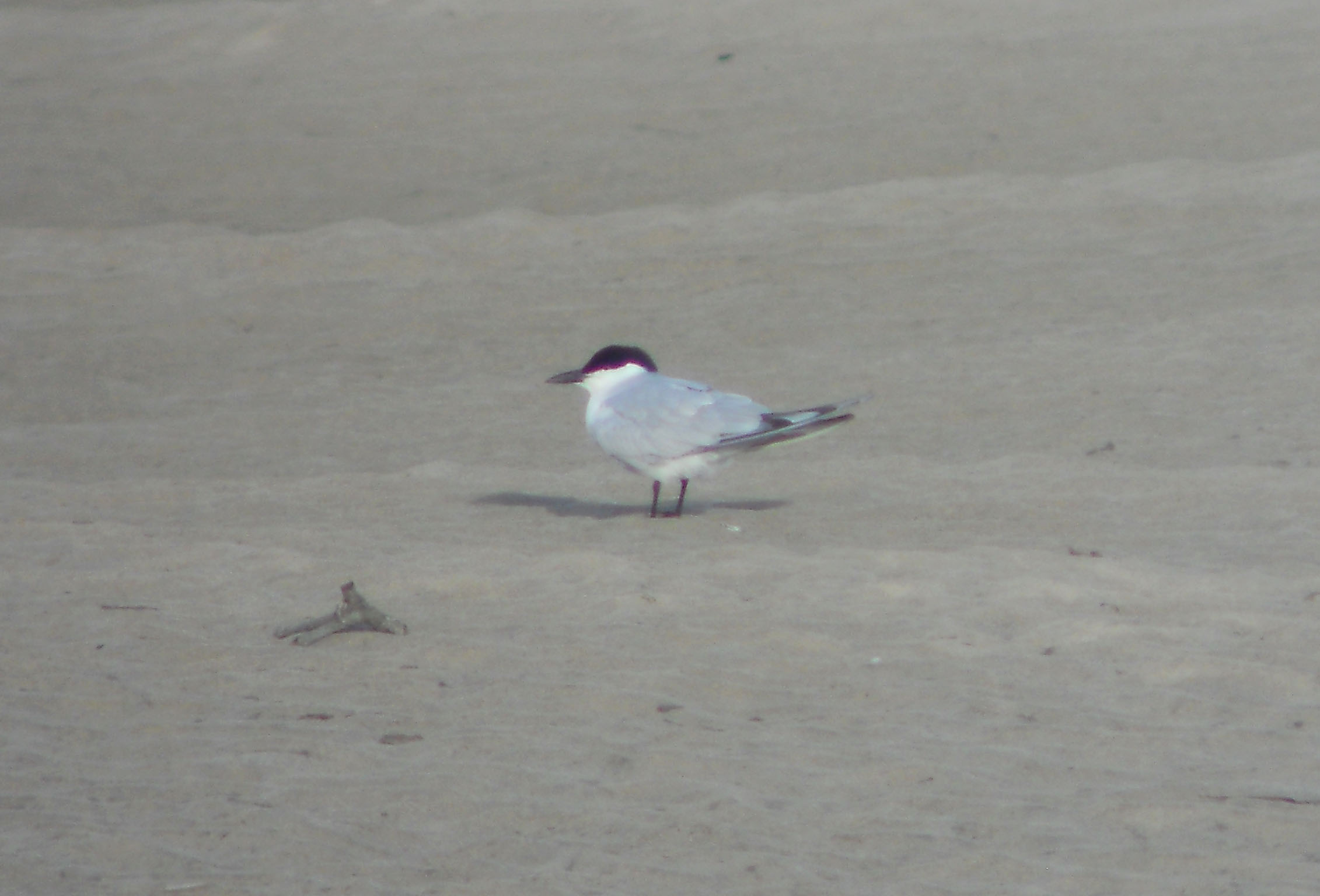 The Alpine Swift remained in the skies over Sheringham (Norfolk) for the first half of the week. Although at times mobile, it appeared to prefer the Beeston Bump area, roosting on the cliffs there until 6th. At such an advanced stage in its moult — the bird is halfway through primary moult with five new primaries — this individual must be a non-breeder (a breeding adult would have grown, at the very most, only a couple of new primaries by now), while the razor-sharp points to the tips of the old primaries and the relatively broad tips to the tail feathers are strongly indicative of the bird being a first-summer. 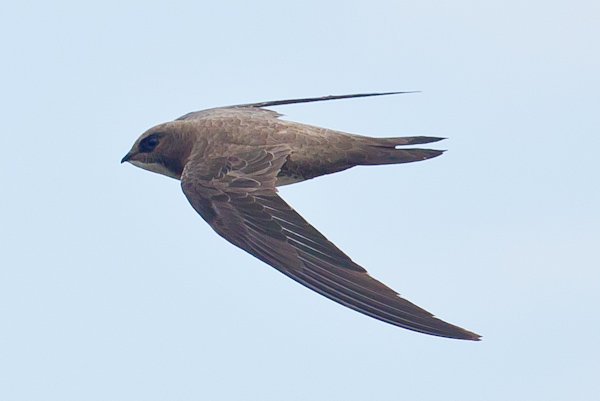 After such a productive spring, it was perhaps fitting that Bardsey Island (Gwynedd) laid claim to the first Melodious Warbler of the autumn, a bird showing well there on 6th. That day proved to be the best of the week for passerines:the Farne Islands hosted a Barred Warbler (the earliest autumn record for the archipelago) and two adult Rose-coloured Starlings were noted at Marvig, Lewis (Outer Hebrides) and Hillswick (Shetland). Last, but certainly not least, was a fine male Black-headed Bunting near the observatory on North Ronaldsay (Orkney) from 5th. 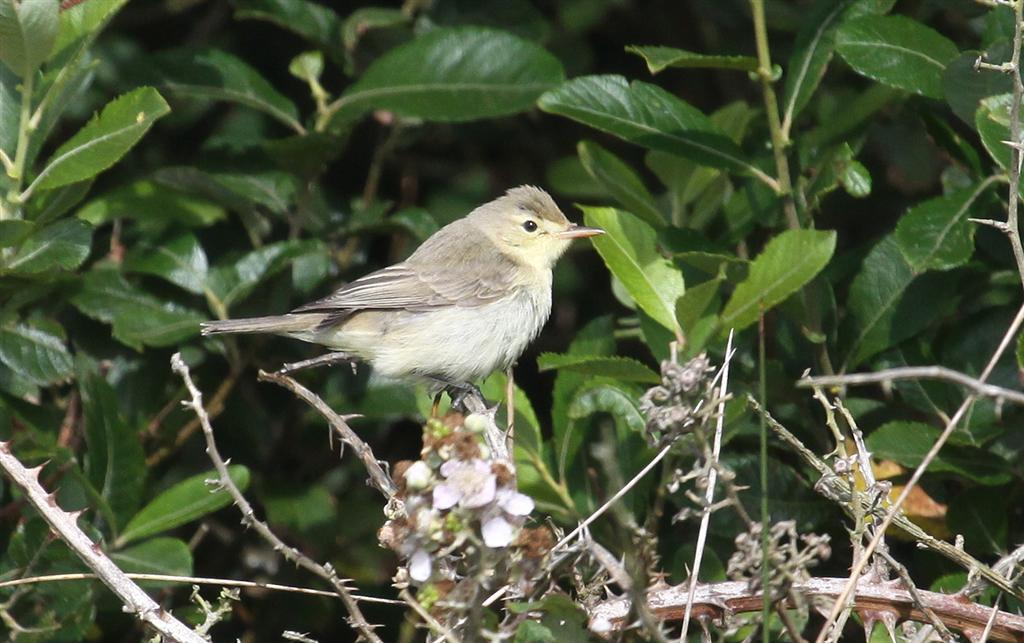 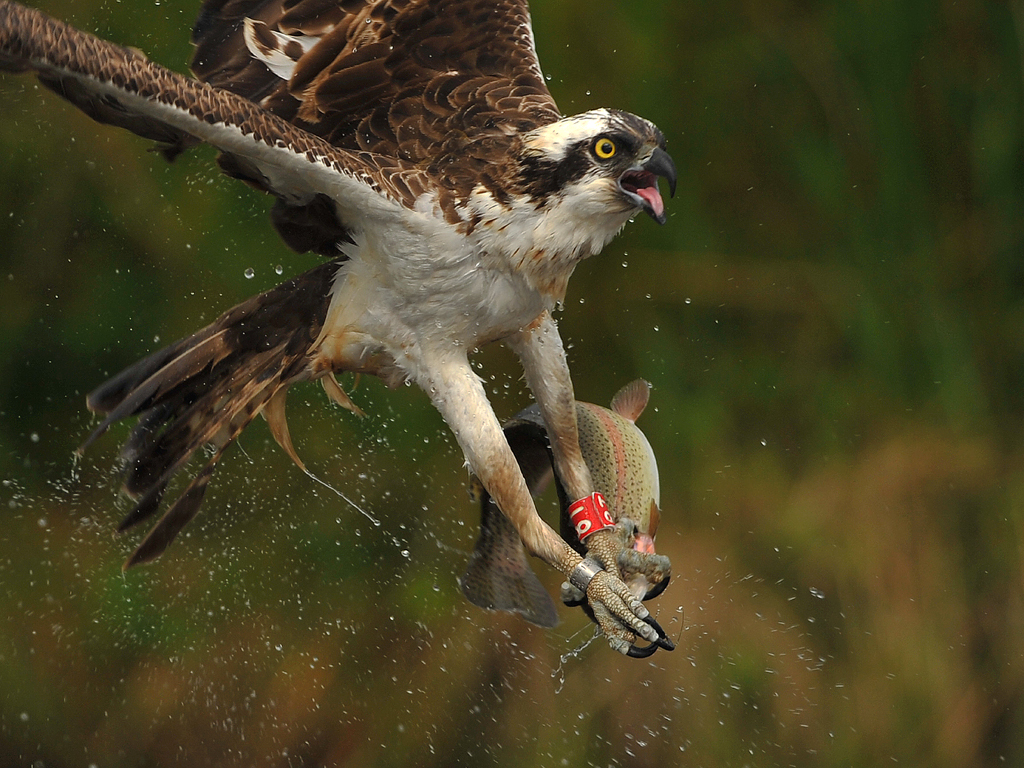 Rothiemurchus in Scotland is Britain's 'honeypot' site for bird photographers seeking high-quality Osprey images. Even so, the visiting Ospreys are wild birds and so are unpredictable in the timing and direction of their approach, sometimes not coming in to fish at all. There is therefore still a need for photographers to have the classic combination of patience and skill if they want to capture great images of these birds. With perseverence, though, Bill Doherty shows what can be achieved, his stunning close-up shot freezing the action as an Osprey successfully grabs a trout. Despite the distracting leg-rings, Bill's image has so many good points — pose, expression, colours, sharpness, composition, water droplets and so on — that his first Photo of the Week was assured. 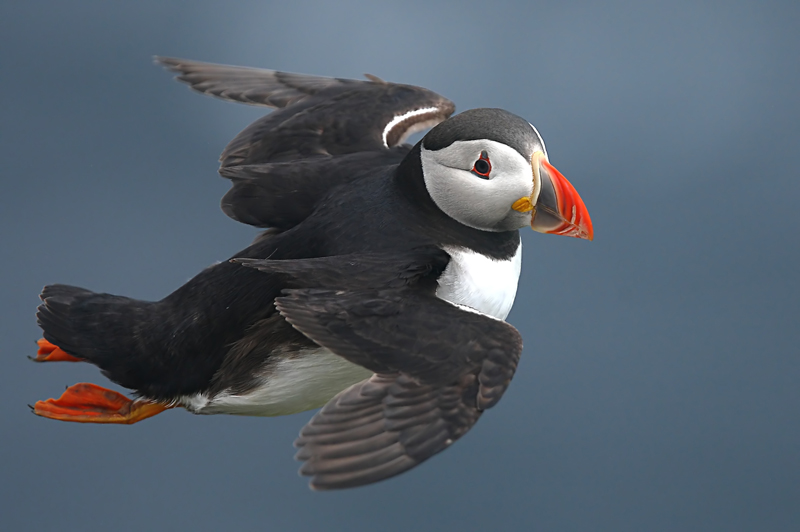 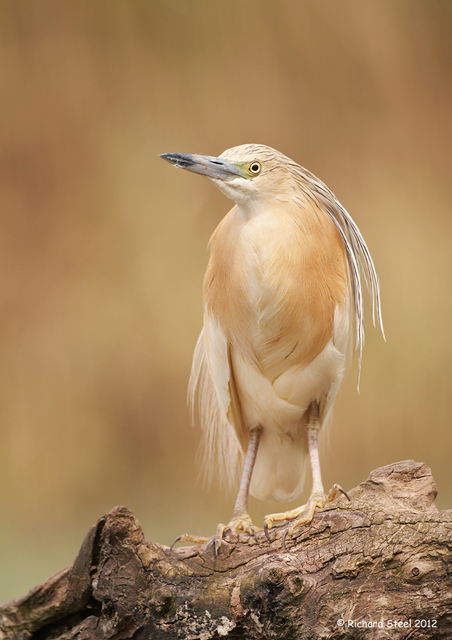 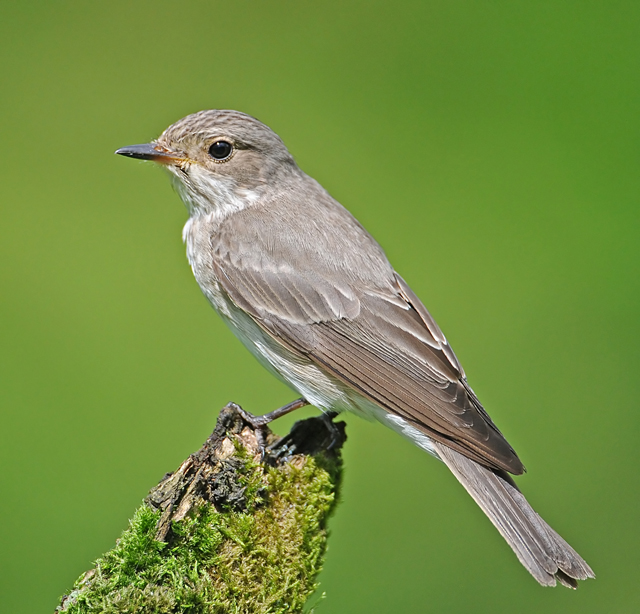 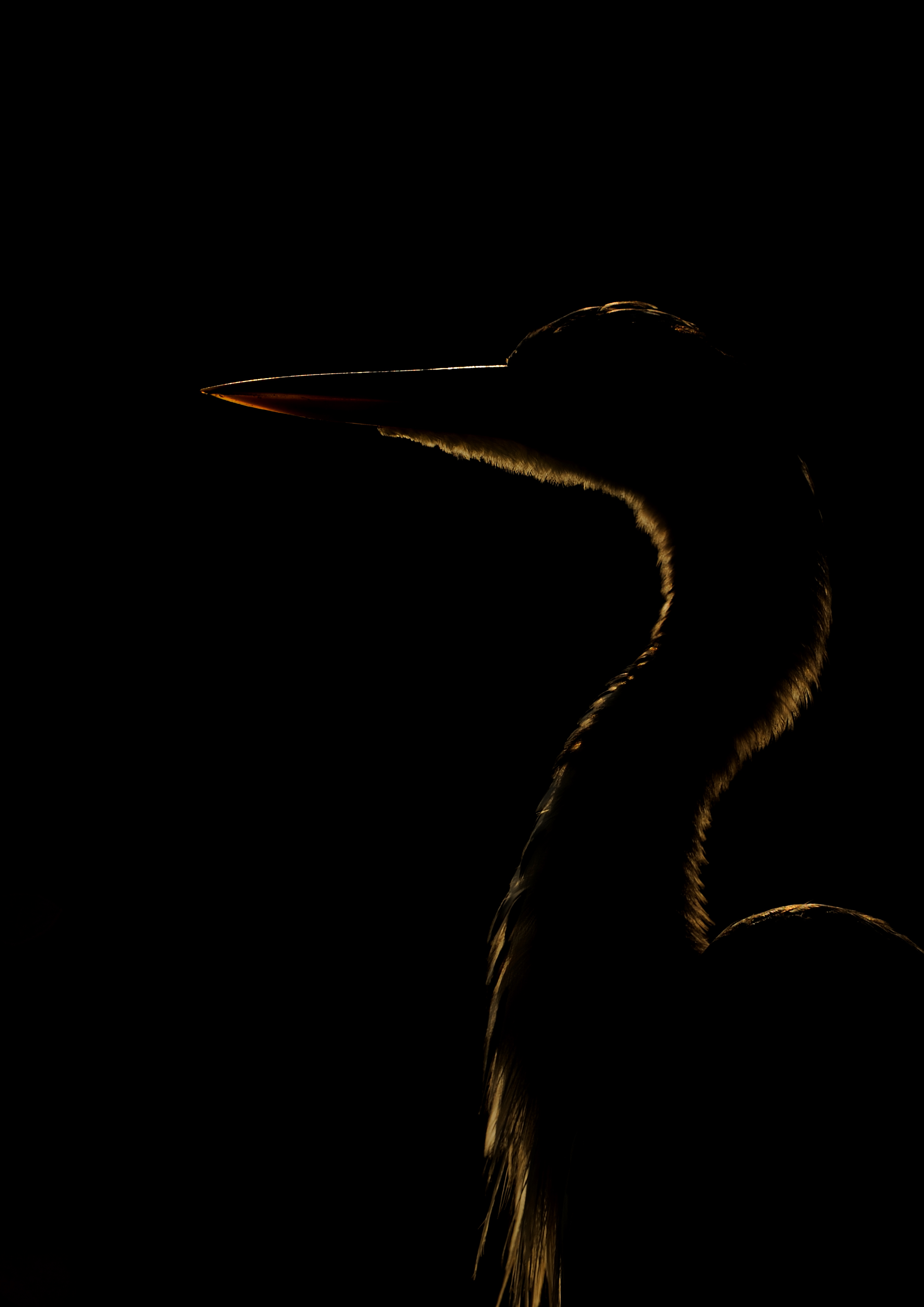 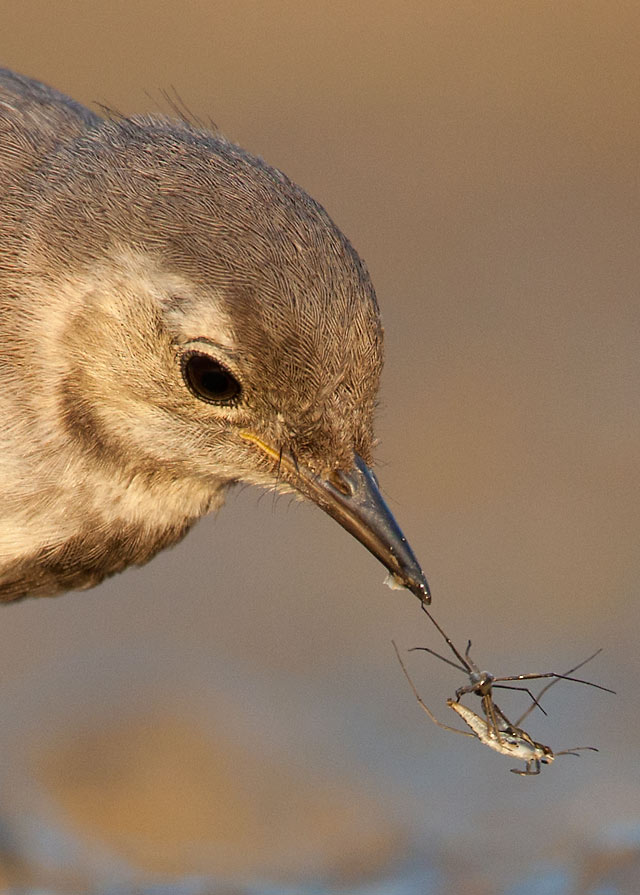 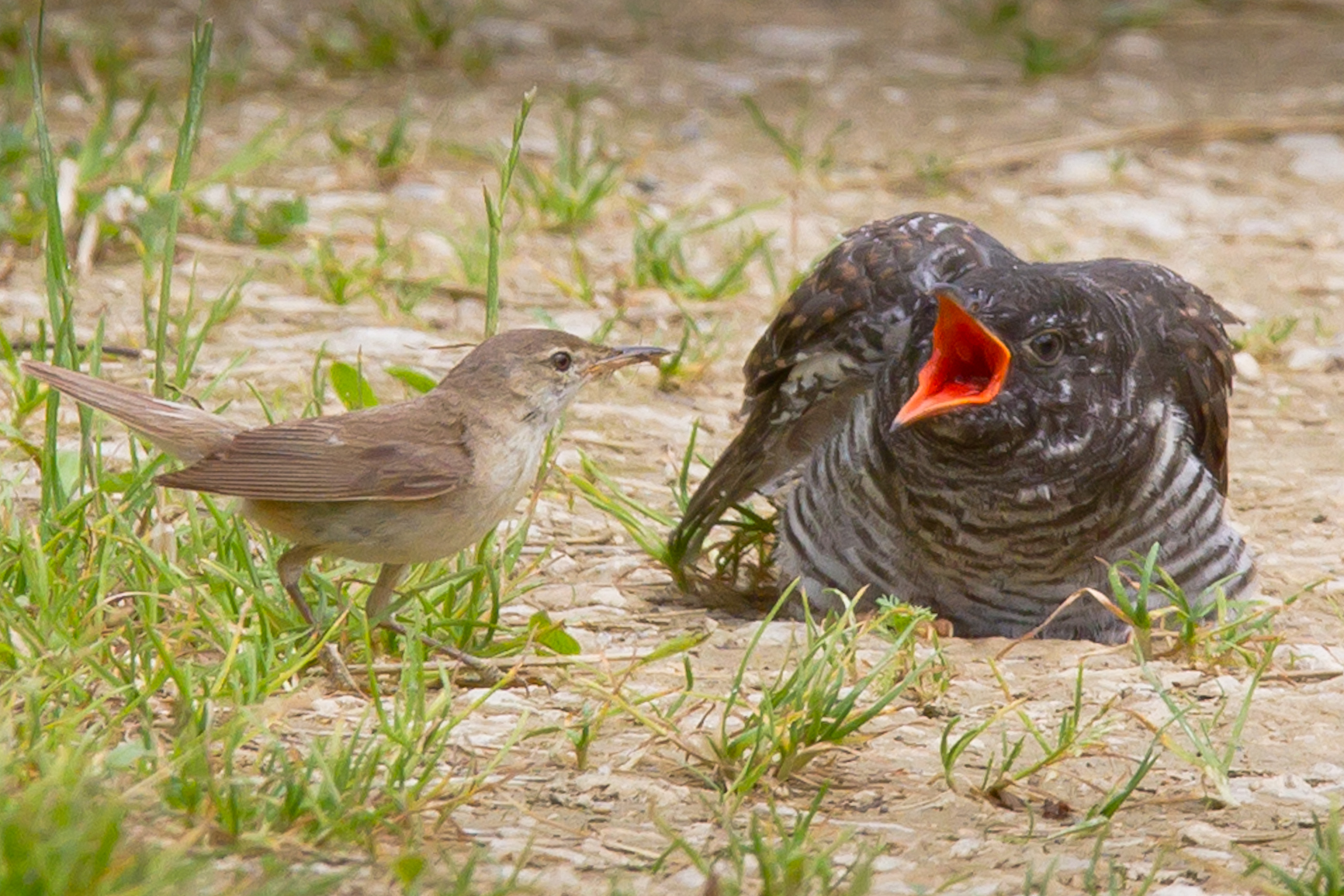 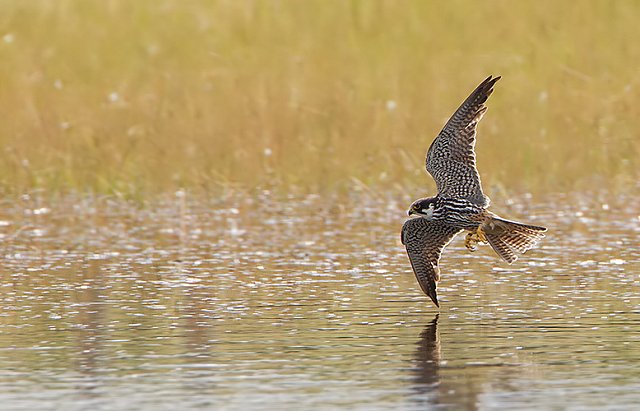 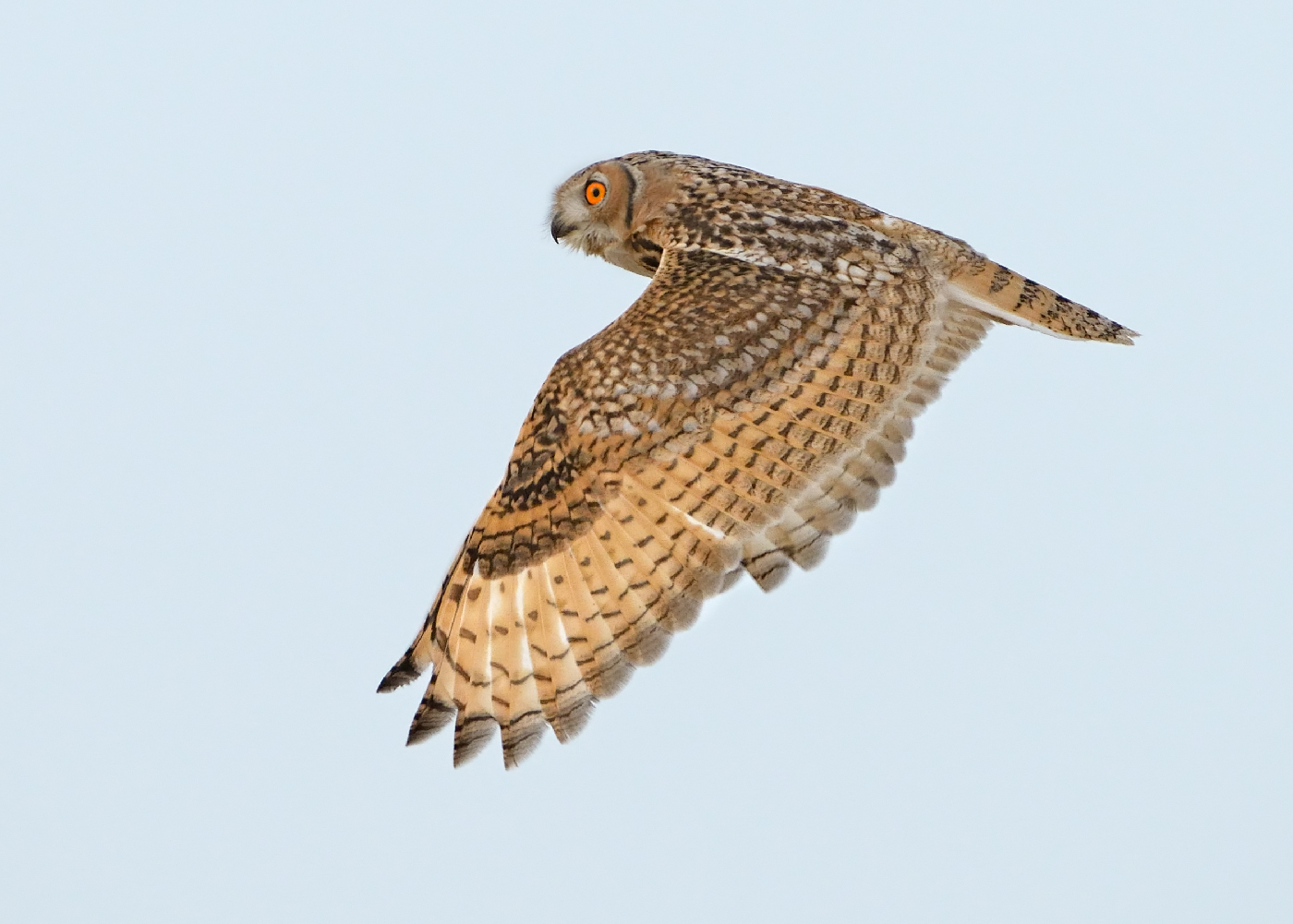 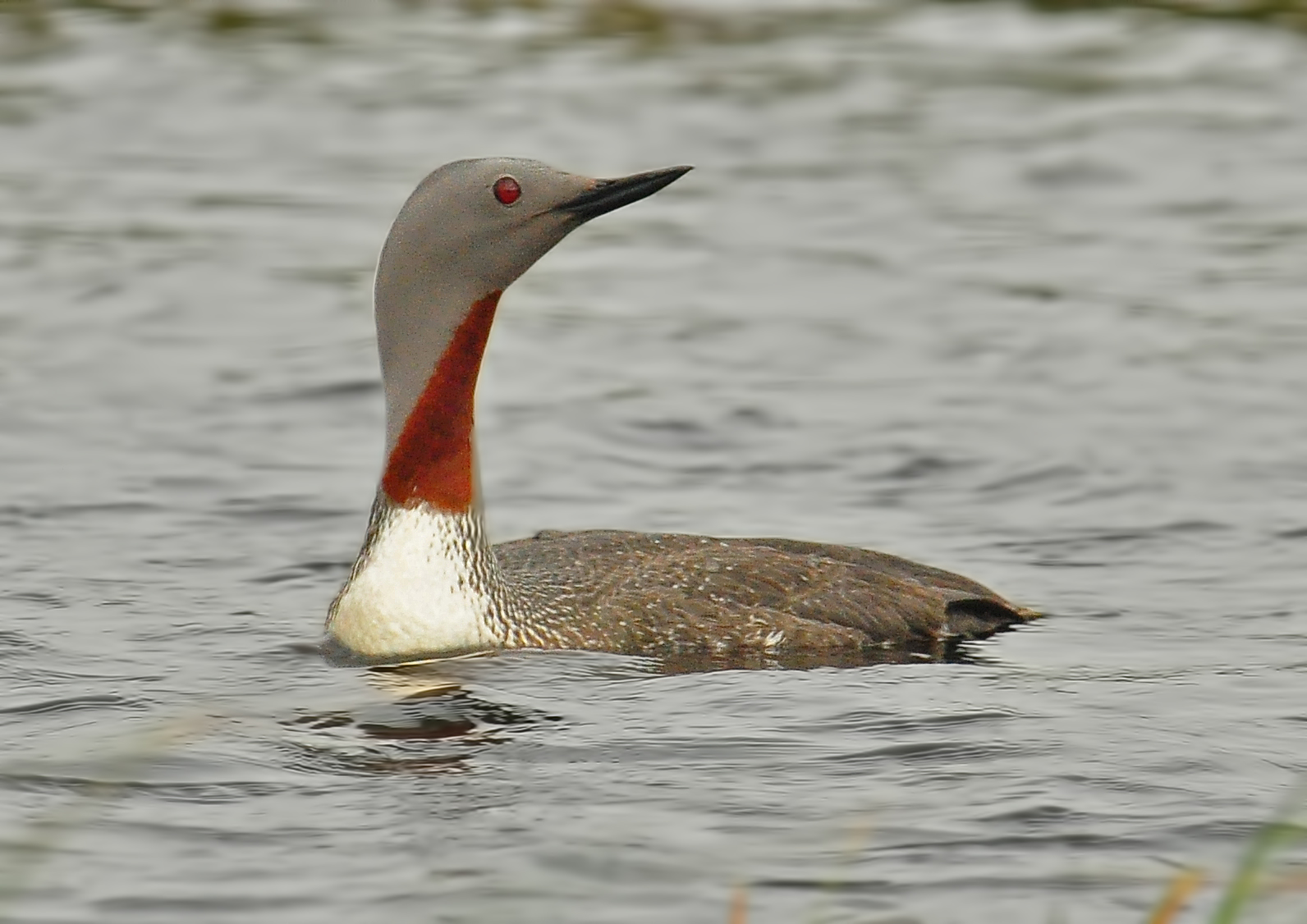 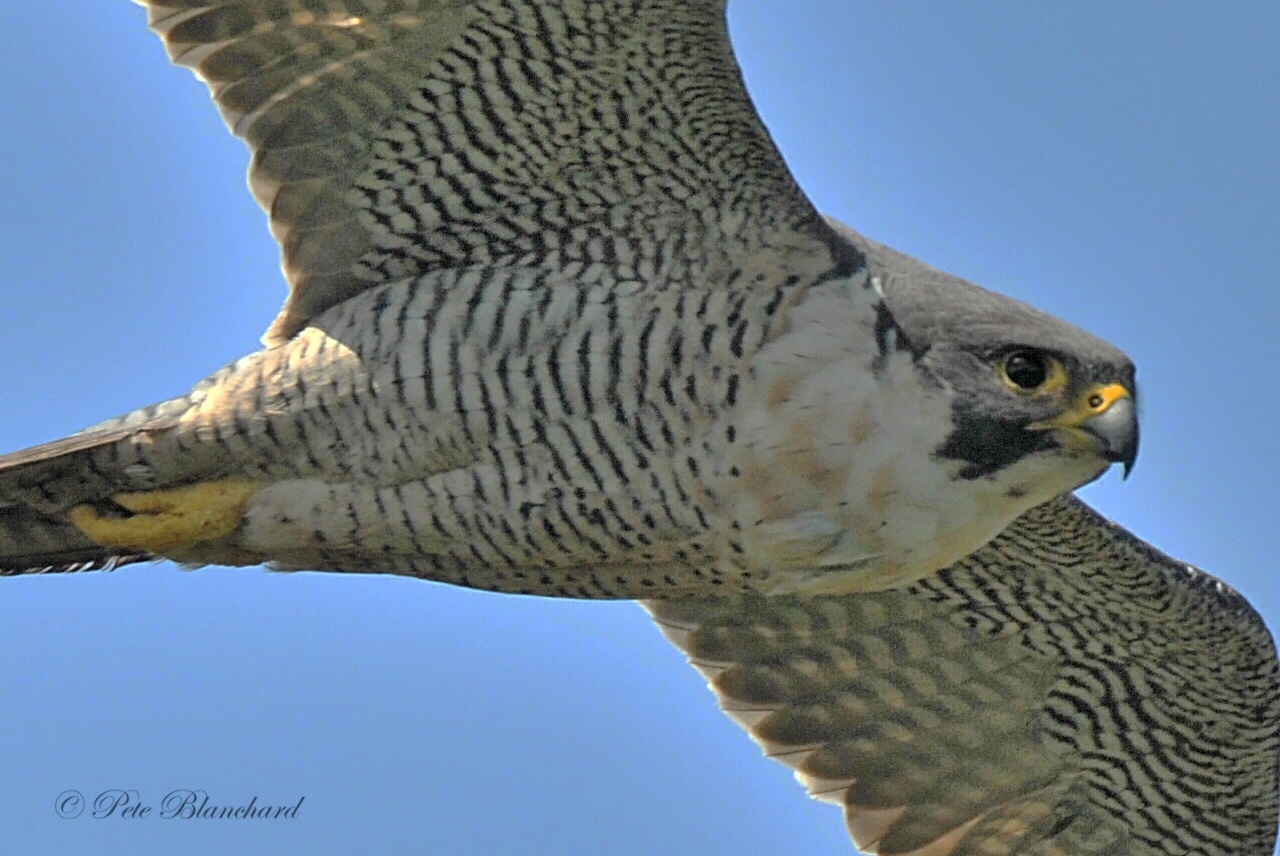