What a dreary Easter weekend that was! It's fair to say the term 'washout' could reasonably be applied to many areas over the past seven days, while much of the northern halves of Britain and Ireland once again suffered wintry conditions that brought snow and ice.

You know it's been a quiet week when someone hoaxes an approachable drake Baikal Teal on Portishead Boating Lake, as happened on April Fool's Day. That said, the week's big find was indeed a duck, albeit one at the rather more far-flung location of St Kilda, Outer Hebrides. The bird in question was a gorgeous drake Hooded Merganser, which spent a couple of days fishing on the island's tiny pond on 29-30th and was present again there on 3rd. Unfortunately, it had chosen just about the most inaccessible spot in Britain at which to turn up but, with a bit of luck, there might be hope of a relocation on Lewis or North Uist in the coming days.

It was otherwise 'as you were' in terms of major rarities, with the drake American White-winged Scoter present off Musselburgh, Lothian, throughout and Pacific Divers still on show at Crookhaven, Co Cork, on 2nd and Pendower Beach, Cornwall, to 31st. The Pied-billed Grebe looks to be settling in for its third summer at Loch Feorlin, Argyll, with the Shetland bird still at Loch of Spiggie on 2nd. The American Horned Lark also shows no immediate sign of departing Staines Reservoirs, Surrey: it was still there on 3rd.

A White-billed Diver off the Farne Islands, Northumberland, was perhaps the same bird as that off Newbiggin last week. In the Outer Hebrides, twos were off Eoligarry, Barra, and Port Skigersta, Lewis, while a single bird was off Gloup, Yell, Shetland, on 1st. One flew past Corsewall Point, Dumfries and Galloway, on 28th, while the usual congregation off the north Aberdeenshire and Moray coasts peaked at a minimum of six on 1st.

A female Ferruginous Duck was at Oxford Island, Co Armagh, on 1st, with the drake still at Llan Bwch-llyn Lake, Powys, on 3rd. Eight Ring-necked Ducks were noted across Britain and Ireland, including the Lincolnshire bird moving north-east from Bagmoor to Barton-upon-Humber and the confiding drake still commuting between lochs on the outskirts of Edinburgh. Although there was a possible in Co Armagh, the only confirmed Lesser Scaup was once again the Cornish drake at Dozmary Pool. 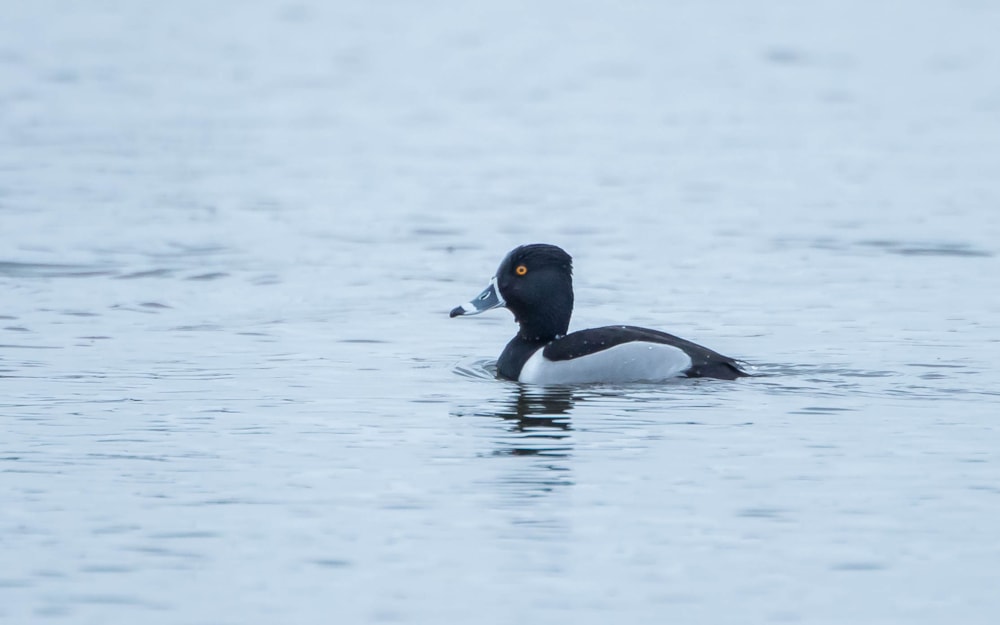 The drake American Black Duck lingered at Strontian, Highland, where it has paired up with a female Mallard once again. The week's only American Wigeon was the long-staying drake at Rutland Water, which has been present since mid-August 2017. Green-winged Teal were somewhat more numerous, with the five recorded individuals including new birds at Keyhaven Marshes, Hants, Ballycarry Bridge, Co Antrim, and Blennerville, Co Kerry, plus a hybrid at Venus Pool, Shrops. Three Surf Scoter remained off Porthpean, Cornwall, with five different birds seen off Balbriggan, Co Dublin, during the week. Singles were off Counties Meath and Clare, with two drakes off Colwyn Bay, Conwy, and long stayers off Ruddon's Point, Fife, Musselburgh, Lothian, and Sound of Taransay, Outer Hebrides. The only King Eider this week was the female at Dunmanus, Co Cork.

At least one Snow Goose was in Moray this week, with the white morphs still on Berneray, Outer Hebrides, and at Loch of Skaill, Orkney. Black Brant remained at Kilnsea, East Yorks, and Walney Island, Cumbria. After a lean winter for sightings, three Cackling Geese at Ballintemple, Co Sligo, on 30th were something of a surprise.

The first Black-crowned Night Heron of the spring was on the north side of Aldeburgh, Suffolk, on 31st, but failed to linger long. A White Stork with an inconspicuous metal ring, situated just above its left knee, was at Baston Fen, Lincs, on 28th, before flying over Woodwalton Fen, Cambs, later that day. It was then photographed on the Suffolk coast at Boyton and Hollesley on 29th, before being seen in Hertfordshire and Bedfordshire on 1st. As ever, it's very difficult to establish where such birds come from, with the possibility of a free-flying escape or a bird from a reintroduction scheme seemingly the most likely origin for this individual. Glossy Ibises were at seven sites, including new birds on Tiree, Argyll, and in Co Cork. 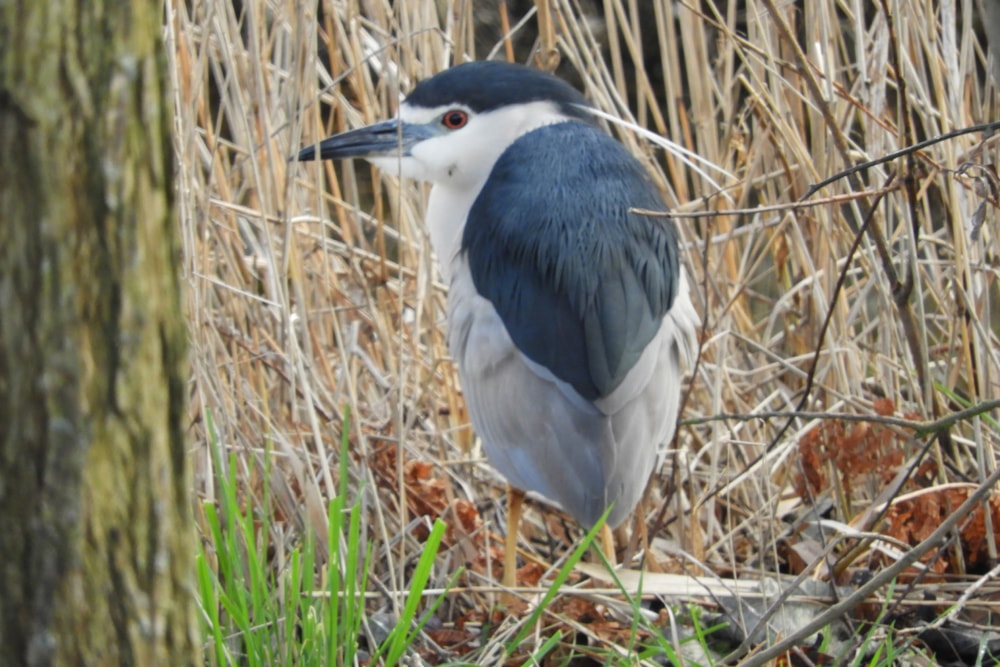 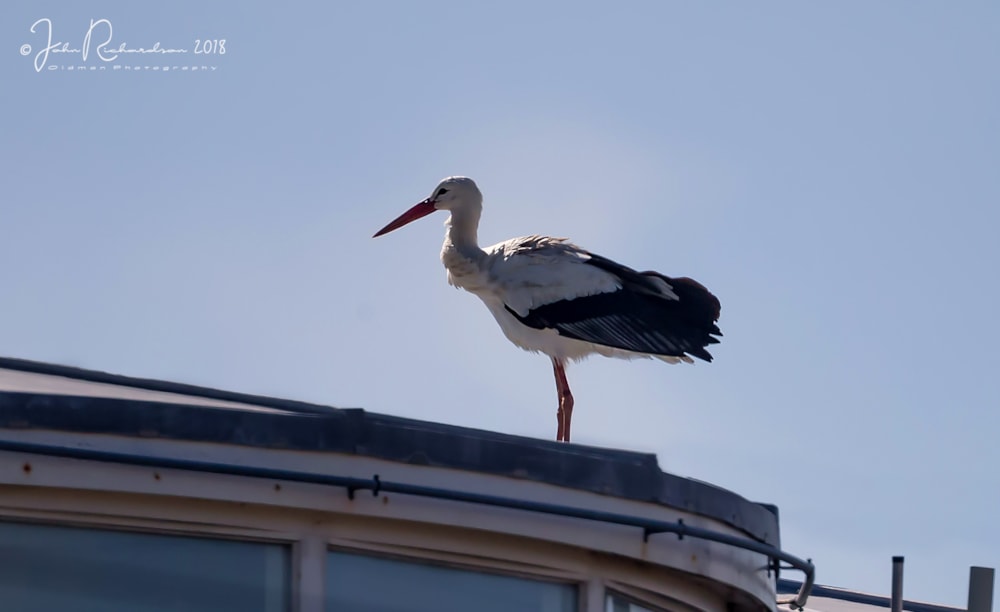 Rare waders were few and far between, although the Long-billed Dowitcher was reported regularly from Tacumshin, Co Wexford, and the Grey Phalarope lingered at Low Newton-by-the-Sea, Northumberland, to 1st. Another Grey Phal was off Spurn, East Yorks, on 2nd.

The American Herring Gull was still at Kilkee, Co Clare, on 1st. A first-winter Ring-billed Gull was new in at Tralee, Co Kerry, alongside at least one adult in the same area. Two more, an adult and first-winter, were at Cuskinny Marsh, Co Cork, on 31st, while singles remained in Co Dublin, Cornwall and Hampshire. Seven sites produced Kumlien's Gulls with the stand-out record a juvenile roosting at Grafham Water, Cambs, on 1st.

What could feasibly be the Gwent bird relocating, a female Snowy Owl was seen at St David's Head, Pembs, on 30th and 3rd, while the Scilly bird was again logged on 3rd.

After the previous week's influx, it was nice to see a couple more White-spotted Bluethroats unearthed. A fine male showed well at Newbiggin-by-the-Sea, Northumberland, from 1-3rd, with another male at East Halton Skitter, Lincs, on 3rd. Meanwhile, the Bluethroat reported at Flamborough Head, East Yorks, on 3rd was presumably cyanecula; the Landguard male reappeared on 2-3rd. 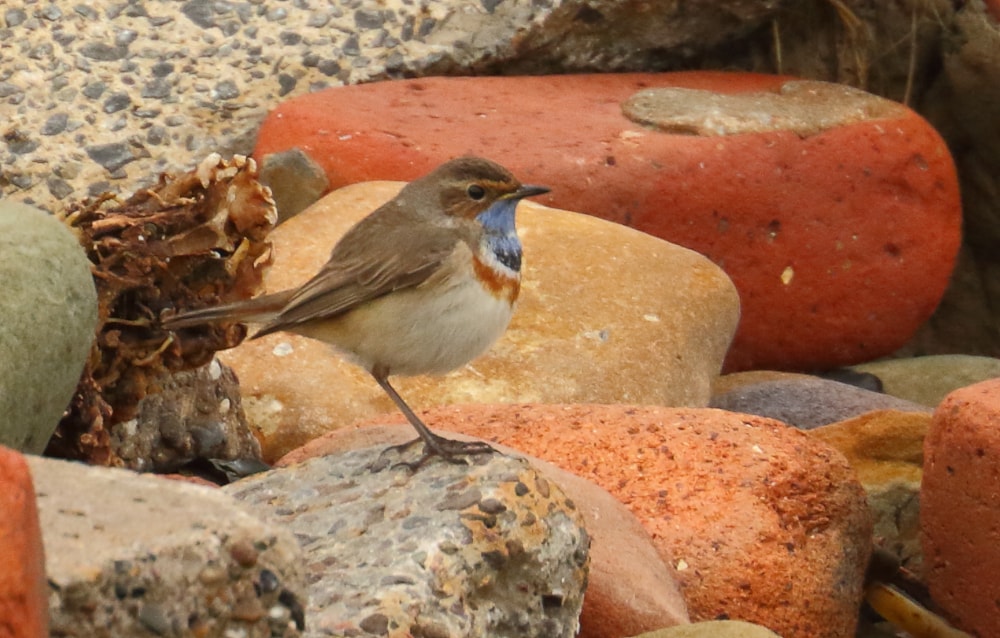 Scarce migrants were otherwise few and far between, although a Hoopoe was seen at Lizard, Cornwall, on 3rd. Common migrants weren't much more numerous, although there were several firsts for the year: Common Terns began to appear from 30th, when one reached as far as Northamptonshire, and Common Redstarts were in Pembrokeshire and Buckinghamshire on 3rd. Swallows, House Martins and Willow Warblers seemed more numerous, but were by no means everywhere, although there were an impressive 95 reports of Western Osprey, most involving actively migrating birds. The first Sedge Warbler sang at Dungeness, Kent, on 31st, with birds in Hampshire and Norfolk on 3rd.

A new Eurasian Penduline Tit was at Leathes' Ham, Lowestoft, Suffolk, from 2nd. 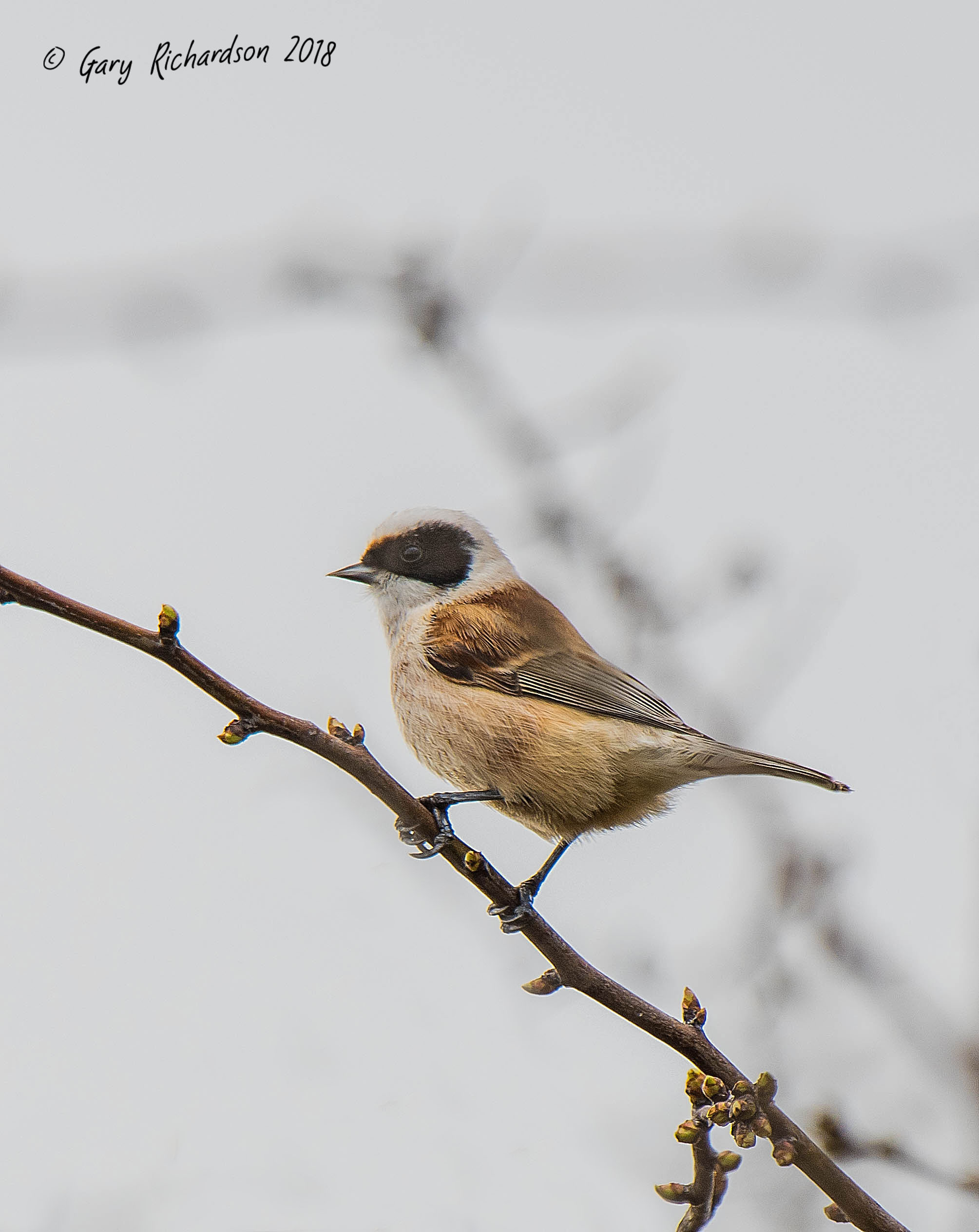 At least two Coues's Arctic Redpolls were found among a big redpoll flock in fields at Felthorpe, Norfolk, on 31st, though there were reports of three and four from the site on subsequent days. One also continued to show well at Hazlewood Common, Suffolk, as did another at Fochabers, Moray. The Little Bunting put in another week at Walthamstow Wetlands, London, and has been showing rather well, while the Common Rosefinch was again in a garden at Plymstock, Devon, on 31st. Meanwhile, a European Serin was in a garden at Greystones, Co Wicklow, on 3rd. Following a bird in the UAE earlier this year, what is potentially the first East Siberian Wagtail for the region (as defined by Birds of the Western Palearctic) was found at Phassouri, Cyprus, on 28th, and lingered into April. Other news from the island included a Blyth's Pipit and a Turkestan Shrike.

Exciting news from Mauritania concerned several African Grey Woodpeckers just within the WP boundary, north-east of Ouadane, on 28th. Meanwhile, in Egypt, there was a report of a Wahlberg's Eagle at Ras Gharib on 30th – potentially a regional third. 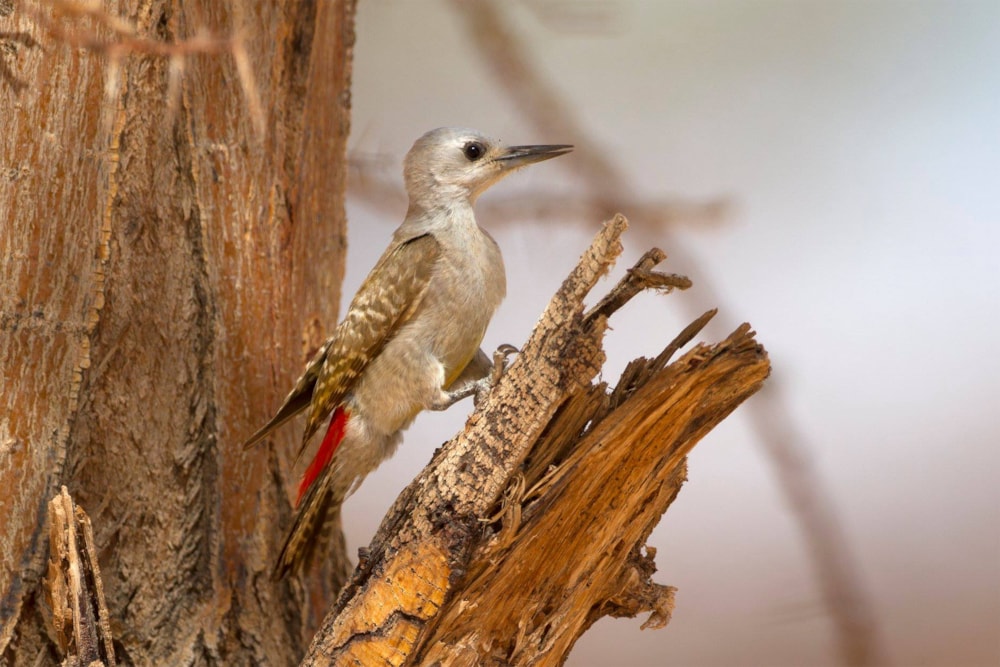 Lanzarote scored heavily with a White-crowned Wheatear at Costa Teguise on 30th, while the Dwarf Bittern remained on Fuerteventura on 2nd. In Cape Verde, a Sooty Tern was seen on Raso on 30th. 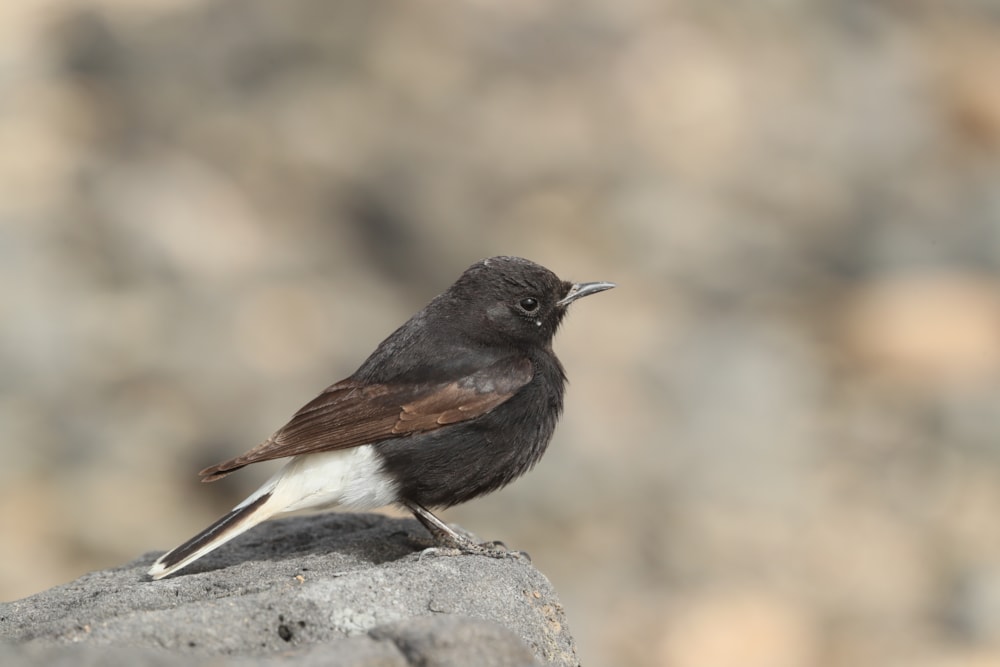 Other highlights included a Dusky Thrush at Rostock, Germany, on 1st, the Pygmy Cormorant still in Brussels, Belgium, the Lesser Flamingo near Eilat, Israel, and the Thayer's Gull at Xove, Galicia, Spain.