Although June had delivered a run of desirable rarities – not least two mega swifts in the Northern Isles – none had yet proved twitchable. Step forward the East Yorkshire coast – and more specifically Bempton Cliffs RSPB, which closed the month with Britain's eighth Red-tailed Shrike. Sparking one of the biggest twitches of the year so far, the male was initially located on the clifftop, presumably freshly arrived in off the North Sea, during a spell of inclement weather on 27th, before heading approximately 1 km inland where it was relocated the following day.

With seven previous records to date, this is just the second since the recent split of the taxa from the closely related Isabelline Shrike, following one on North Ronaldsay, Orkney, on 23-24 August 2020. Five of the previous six proved brief one-day visitors, with a long-staying female at Cemlyn Bay, Anglesey, as far back as 1998 the only outlier – sparking extra impetus for a large-scale twitch. Of course this paucity of records doesn't necessarily reflect the true status of Red-tailed Shrike, given that there have been numerous candidates for first-year birds in the past, which are considered in many cases not safely identifiable, hence the extra focus on the rare occasion an adult bird turns up. 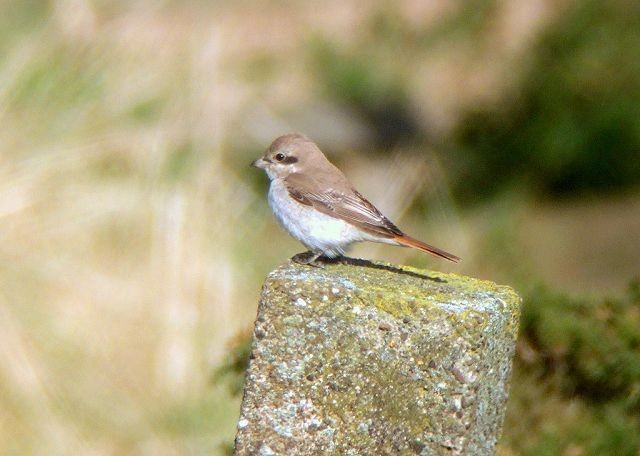 Incidentally, analysis of photographs showed the Bempton bird to be an exact match to the example present at Hargen aan Zee, The Netherlands, on 14 May, featuring the same feather damage to its right flank. Quite where it has been in the intervening six weeks is anybody's guess. 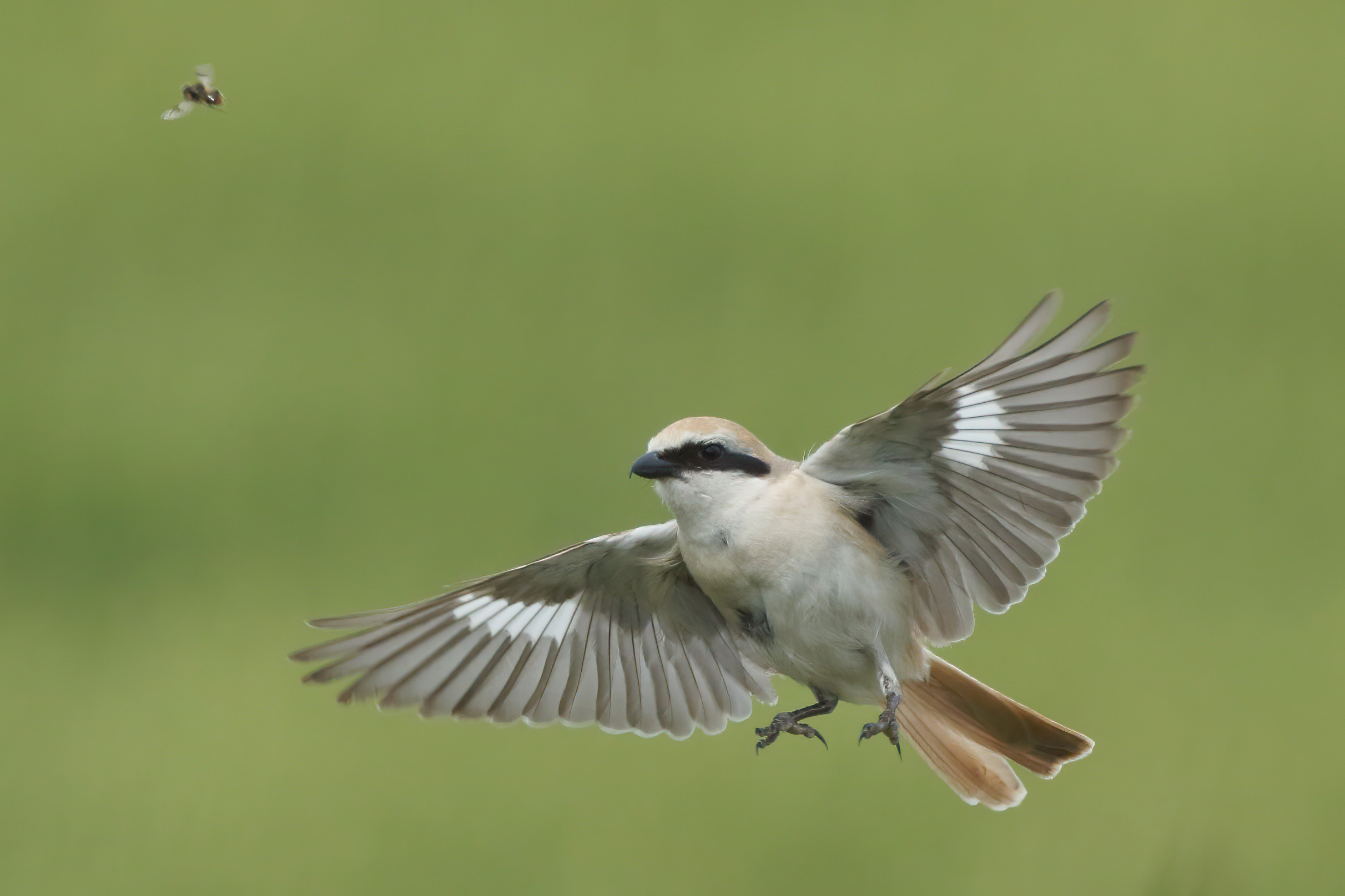 It is always special when two bona fide megas can be enjoyed just a short distance from each other. Just like in September 2021, when the Green Warbler could be enjoyed at Buckton, the Black-browed Albatross again put in a number of memorable performances just a short distance away from the shrike at the cliffs throughout the week. A brief Alpine Swift on 30th completed an outstanding hat-trick. Another highlight of the week was an excellent early movement of Cory's Shearwaters, which included an impressive count of 617 past Galley Head, Co Cork, on 28th (accompanied by seven Great Shearwaters, six Sabine's Gulls and eight Long-tailed Skuas, themselves all unusual tallies for June). Eight sites between Porthgwarra, Cornwall, and Portland, Dorset, also boasted sightings, with a further four Irish sites joining in the action. Away from the South-West Approaches, one flew north past Spurn, East Yorkshire, on 2nd. Remarkably, an adult Long-tailed Skua appears to be summering in the Scottish Highlands: after a report on a moor near Newtonmore on 11 June, one was reported in flight at Insh Marshes RSPB on 2 July. Other Long-tailed Skuas were off Start Point, Devon, Lizard Point, Cornwall, and Seaton Sluice, Northumberland.

A decent candidate for a Brown Booby headed south past Llanmadoc, Glamorgan, during a morning seawatch on 28th, while a boat off Slyne Head, Co Galway, connected with a Fea's-type petrel on 3rd. Two Wilson's Storm Petrels were logged from a Scilly pelagic on 27th, a Great Shearwater flew past North Ronaldsay, Orkney, on 29th and a Sabine's Gull flew past Whitehaven, Cumbria, on 3rd. Shetland hosted a young drake King Eider off Hascosay, with another still off Musselburgh, Lothian. A new female Ferruginous Duck graced Hornsea Mere, East Yorkshire, from 30th and a drake Surf Scoter was at Lunan Bay, Angus & Dundee, on 1st, while the drake American Wigeon at Skinflats Lagoons, Forth, lasted into July. Both Red-breasted Geese remained at Saltholme RSPB, Cleveland. In Cambridgeshire, the unringed White Stork lingered at Smithy Fen. At least one Spotted Crake remained at Wheldrake Ings, North Yorkshire; a Corncrake was reported singing at Billinge, Lancashire, on 27th. Two unconfirmed Short-toed Snake Eagle reports were received from the vicinity of Bonar Bridge and Strath Brora, Highland. In the Outer Hebrides, the adult female Snowy Owl was back at Scolpaig, North Uist, on 2nd, while a ringtail harrier species flew west past Selsey Bill, West Sussex, the following day.

Pleasingly, European Honey Buzzards have returned to Swanton Novers, Norfolk, for the first time in four years and up to four birds are proving fairly easy to connect with from the watchpoint at present. A further three flew in off the sea at South Foreland, Kent, on 28th, with one at Brough of Birsay, Mainland Orkney, on 26th. An outstanding adult female Grey Phalarope in Orkney on 27th demonstrated why the species is known as Red Phalarope across much of its range – sadly, birds in this pristine condition are particularly rare in Britain or Ireland. Shetland's Broad-billed Sandpiper was at Pool of Virkie, Mainland, on 2nd, with an American Golden Plover still at Tacumshin, Co Wexford. Temminck's Stints were at Balgray Reservoir, Clyde, and Cley Marshes, Norfolk, while Lilbourne, Northamptonshire, was the surprise location for the week's only Pectoral Sandpiper. The Black-winged Stilt family remained at Potteric Carr, South Yorkshire. Dorman's Pool and Bowesfield Marsh, Cleveland, accommodated a Caspian Tern from 29-1st, while sightings at both Dell Quay, West Sussex, and Normandy Marsh, Hampshire, on 3rd perhaps refer to the same individual. Another remained at Idle Washlands, Nottinghamshire. Elsewhere, a first-summer Ring-billed Gull was at Clahane Strand, Co Clare, and the American Black Tern continued at Long Nanny, Northumberland. In Ireland, the Least Tern again took a leave of absence from Portrane Point, Co Dublin, after 27th, before returning on 2nd. A suburban European Bee-eater on power lines at Murton Gap, Northumberland, on 1st was a surprise find, although unfortunately disappear soon after discovery. Up to eight nesting at Trimingham, Norfolk, continued to prove a popular draw, with others reported over Barnham, Suffolk, Banks, Lancashire, and Kilnsea, East Yorkshire. On 3rd, an Alpine Swift was at Elegug Stacks, Pembrokeshire. A breezy morning at Slimbridge gave me a few worries about the Bluethroat showing or not. But finally after a few visits I got a decent vid of it for a minute or two. Not singing so much as it was at the start of the week.#Glosbirds @slimbridge_wild pic.twitter.com/uS92TOv0hN

A young male Golden Oriole was again at The Naze, Essex, on 28th, with a singing male at Wilstone Reservoir, Hertfordshire, on 3rd.. European Serins were at three sites – Dungeness, Kent, Lewes, East Sussex, and Foreness Point, Kent. On 30th, a brief male Red-backed Shrike was at Ness Point, Suffolk, with another at Prestwick Carr, Northumberland, on 2nd.

Great Reed Warblers held on at both Snettisham Coastal Park, Norfolk, and Langford Lowfields RSPB, Nottinghamshire, with the Iberian Chiffchaff still at Regent's Park, London. The Moltoni's Warbler was last noted at Gutcher, Yell, on 27th. A satellite-tagged Saker Falcon that flew north-west out to sea over Heligoland, Germany, on 28th would prove to be the week's stand-out highlight if confirmed as a wild bird – and its trajectory on leaving the island should have British birders on high alert.

Denmark's fifth Zitting Cisticola sang at Skagen on 27th; an adult Bonaparte's Gull was at Kópasker, Iceland. Two Blue-cheeked Bee-eaters were unearthed on 1st – Switzerland's second at Oeschgen and Hungary's third at Dunavecse. On 2nd, a White-tailed Lapwing was at Ewiges Meer, Germany.

An adult Bridled Tern – presumably the Channel Islands individual relocating – enjoyed the company of Common Terns on Île aux Moutons, France, from 28th, while at least one Elegant Tern continued at Grau de Piémanson. In The Netherlands, an impressive tally of three Short-toed Snake Eagles were at Fochteloërveen and a released Bearded Vulture was still at Deleen.

At least three Lesser Flamingos remained at Laguna de Fuente de Piedra, Spain, as did the Western Reef Heron at Platja d'Aro. Belated news was received of a Common Yellowthroat photographed on board MS Queen Elizabeth while docked at Vigo, Galicia, on 4 May (see here).

In the Azores, the hot-spot of Cabo da Praia, Terceira, continued to host a Wilson's Phalarope and three Semipalmated Plovers, with the Pied-billed Grebe still at Lagoa das Furnas, São Miguel.