The arrival of August and a return to more familiar changeable weather conditions and unremarkable temperatures gave birders their first real sense that autumn is only just around the corner. A busier week on Bird News Extra this week was hardly ground-breaking, but a growing amount of dynamism and turnover in birds across Britain and Ireland hinted at the promise of better things in the coming weeks.

The arguable highlight (at least for Orkney birders!) was the reappearance of the adult Roller, this time on the Orkney mainland between Finstown and Heddle. It spent a frustrating few days in Aberdeenshire in mid-July, so it was nice to see this iridescent beauty give itself up and show well for five days from 26th. It represents the first for the islands since June 1966, when an adult graced North Ronaldsay for a day. Next stop the Faroe Islands? 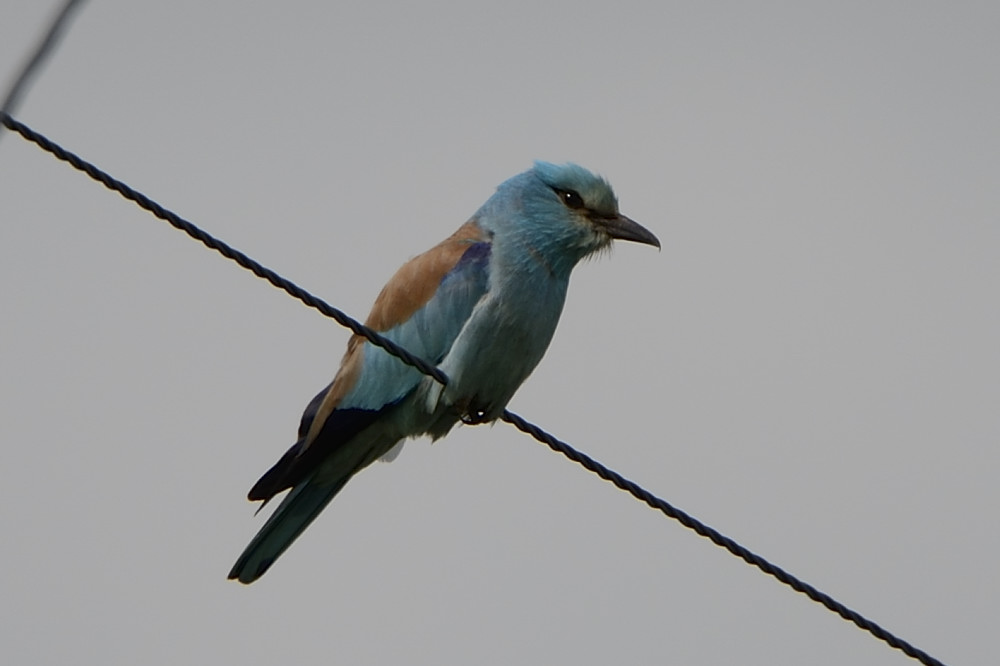 Waders were again well represented this week. Right on the northern tip of Scotland, the first-summer Greater Yellowlegs made two further appearances at St. John's Loch on 27th and 1st, although it magically disappeared between these two incidences. Just over the Pentland Firth, an adult Lesser Yellowlegs was at Bay of Carness (Orkney) on 30th–31st. 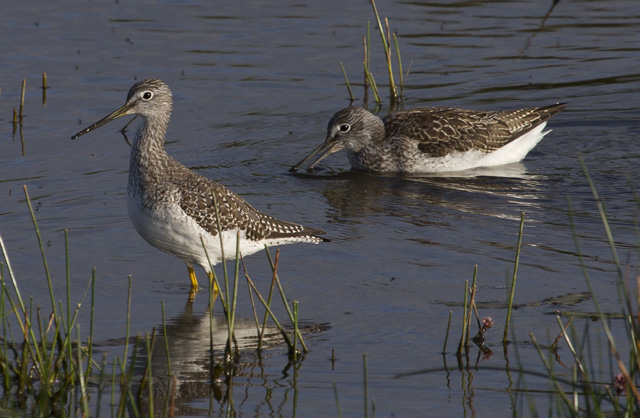 Tyninghame Bay (Lothian) had a productive week, with an adult Semipalmated Sandpiper there on 29th–31st duly replaced by an adult White-rumped Sandpiper at John Muir Country Park late on 1st! Another White-rump was on the lagoon on Brownsea Island (Dorset) on 31st, while Frodsham Marsh (Cheshire) made up for the recent godwit episode with a fine (if mobile) Buff-breasted Sandpiper for three days from 28th. It was another good week for Pectoral Sandpipers, with eight reported: remaining birds still in Antrim to 27th and South Yorkshire to 28th were augmented by new individuals at St. Clement (Cornwall), Cliffe Pools (Kent), Earith (Cambs), Normandy Marsh (Hants), Bishop Middleham (Durham) and Loch of Strathbeg (Aberdeenshire). A Temminck's Stint was also at Cliffe on 31st. 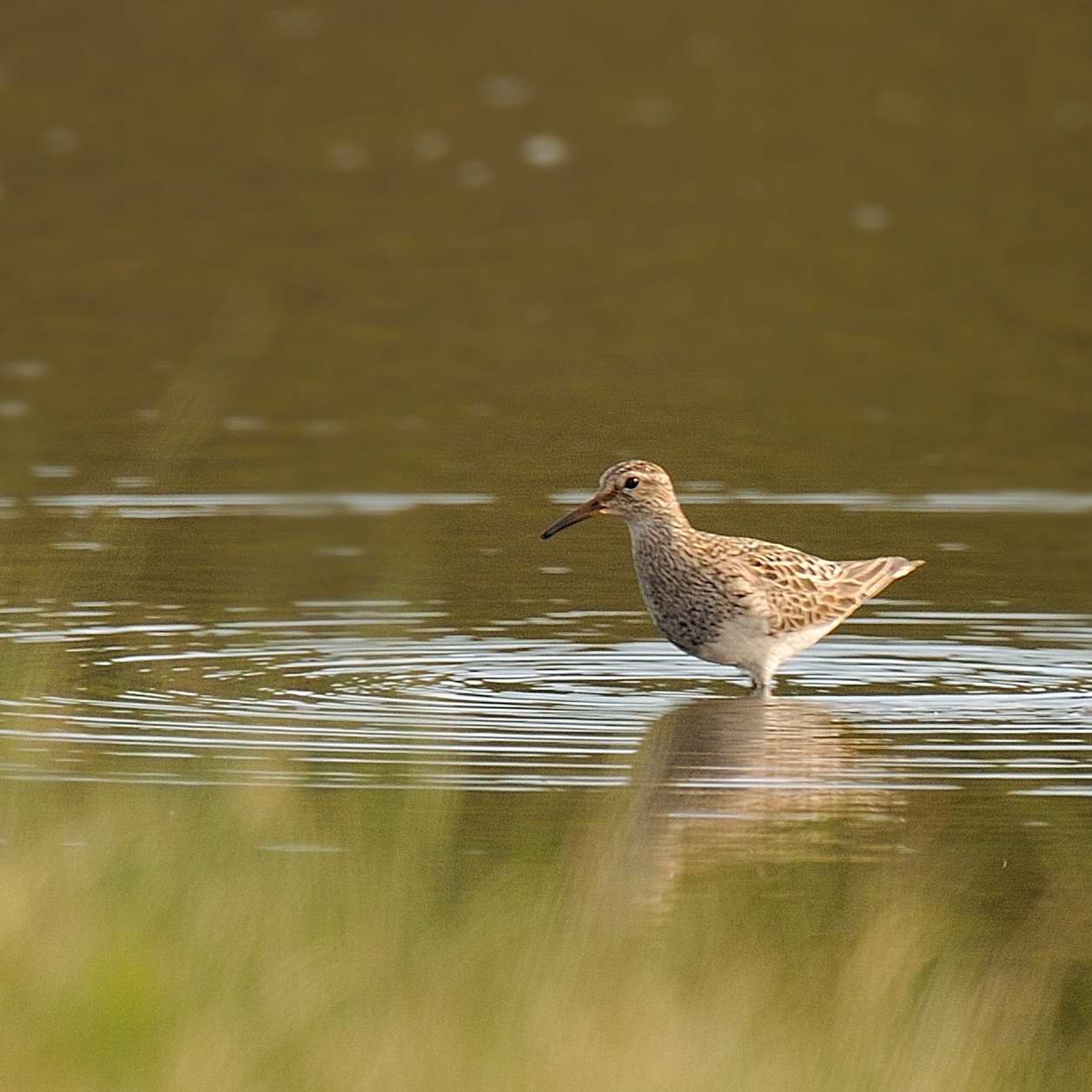 In Gloucestershire, the adult Long-billed Dowitcher remained at Slimbridge all week, where it had begun a (rather rapid) moult out of the stunning summer dress in which it had arrived. Elsewhere, there were reports on 26th of two probable Collared Pratincoles at Bosherston Lily Pond (Pembrokeshire) and a possible Pacific Golden Plover heard only at Spurn (E Yorks).

A small arrival of adult White-winged Black Terns was another feature of the week. Although birds were reported from six sites, perhaps as few as three birds were involved. The first flew over Minsmere (Suffolk) on 28th though didn't linger, and thus may be the same as the bird at Staines Reservoirs (Surrey) at dusk that evening. Although still present at first light, the bird soon flew off northeast and presumably was that which arrived at Alton Water (Suffolk) mid-morning on 29th, where it showed well until the following day. Another was reported in the county at Orford Ness on 29th, with a further adult appeared at Cresswell Pond (Northumbs) late that evening. By the following morning, the Northumberland bird had relocated to Saltholme Pools (Cleveland), where it lingered until the week's end and marked the second of the year for the RSPB reserve here. 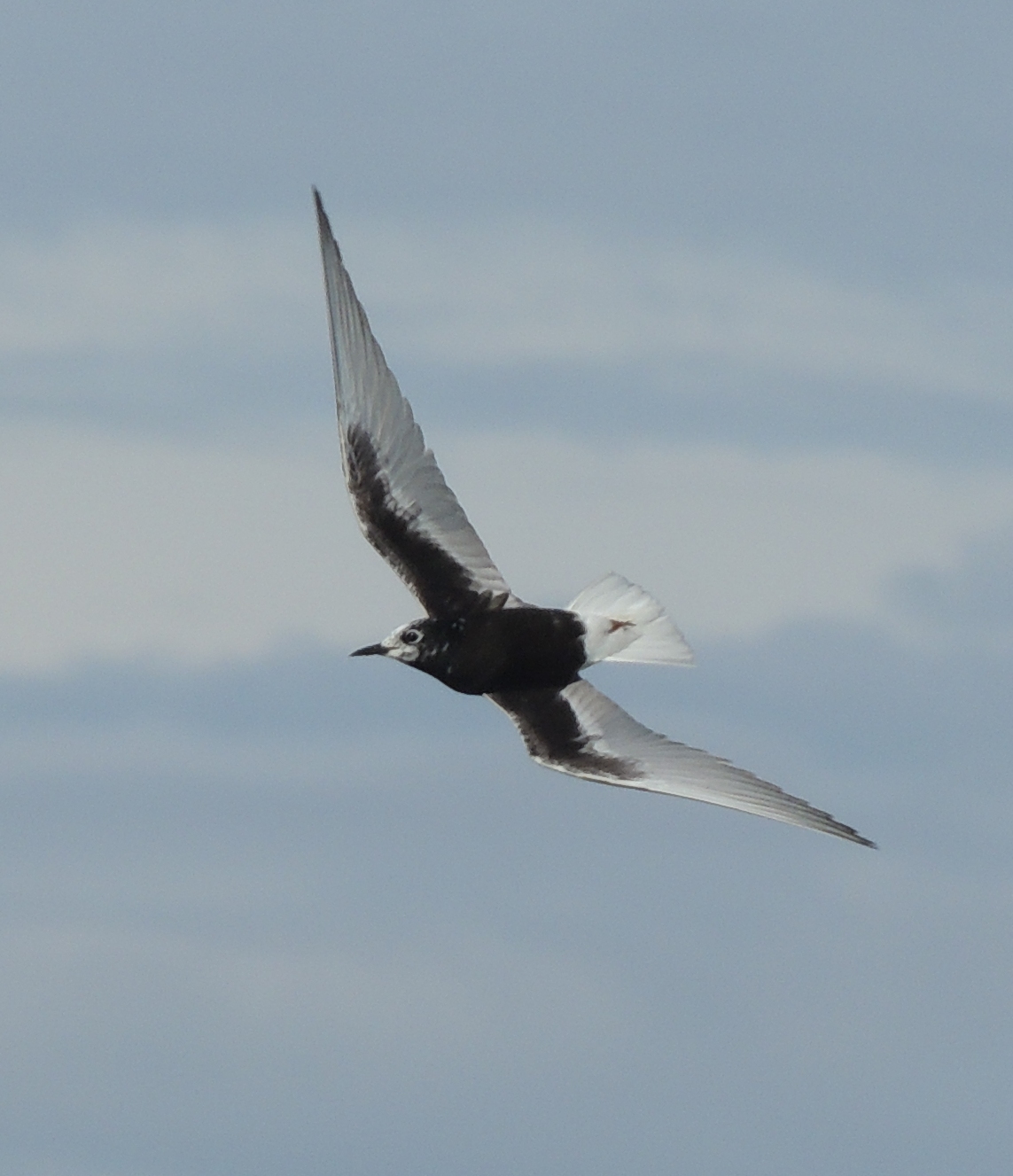 One of the better finds of the week came on 1st, when a splendid summer-plumaged adult Bonaparte's Gull was found with just a few Black-headed Gulls on the Add Estuary (Argyll). Other larid action was limited to the lightest of smatterings of lingering Glaucous and Iceland Gulls, the continuing second-summer Ring-billed Gull in Co. Down and the odd Caspian Gull, while the annual late-summer influx of Yellow-legged Gulls continued. 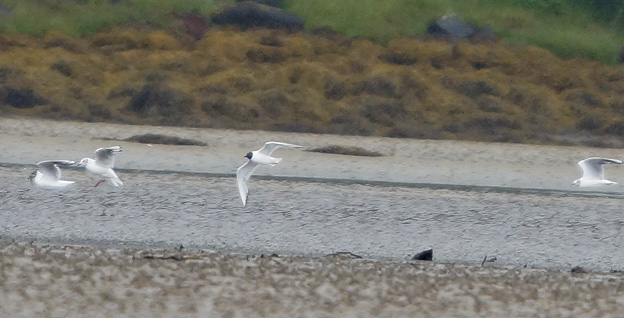 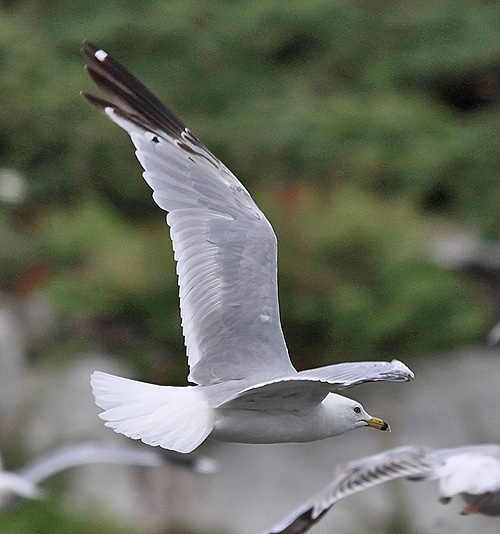 There was also a clear mini-influx of Purple Herons. Of three that arrived, a mobile juvenile at Coombe Hill Meadows (Glos) proved most popular for three days from 28th. Another was on the Ouse Washes (Cambs) on 30th–31st, while a third was seen again at Stodmarsh (Kent) on 29th. Have they bred, undetected, in Britain this year? Over in Cork, a Night Heron was reported from a private site in the west of the county on 26th. There were no Great White Egret reports from the Avalon Marshes, although one again at Muchelney (Somerset) on 31st is no doubt one of 'their' birds. Another was reported at Titchwell (Norfolk) on 28th, and then at nearby Burnham Norton on 30th. 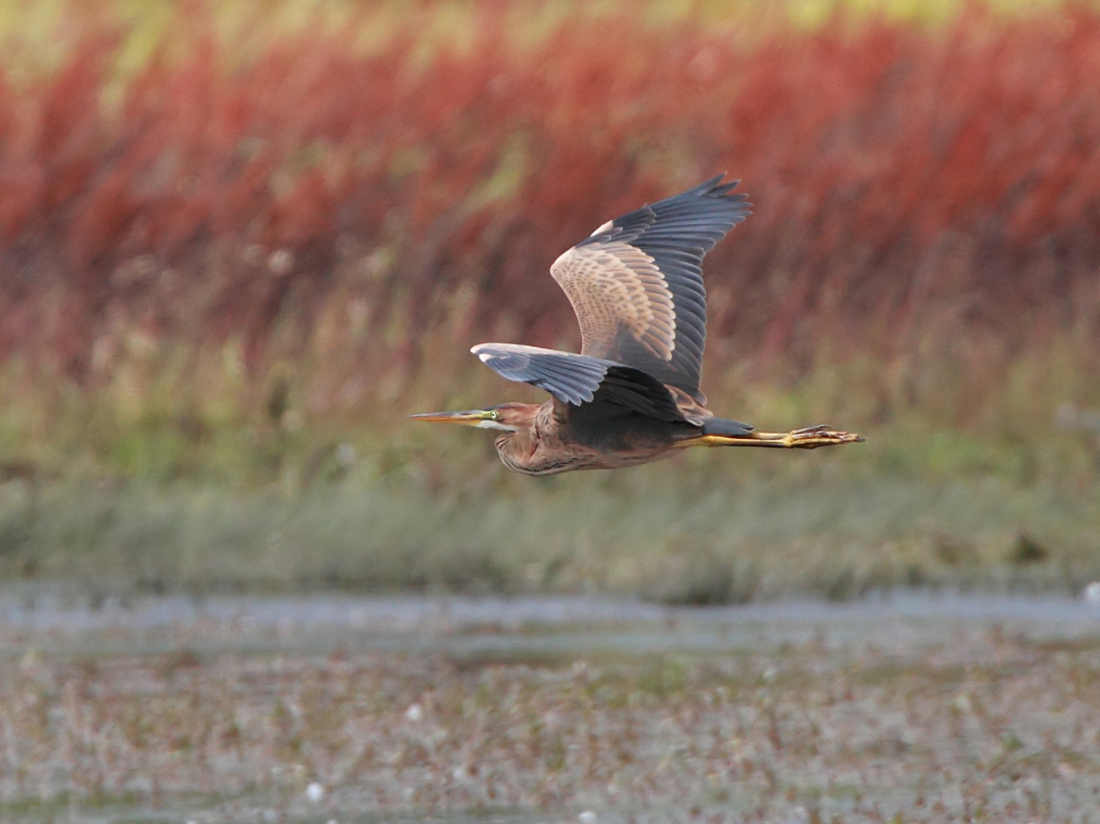 Six Glossy Ibises flying over Llanllwni (Ceredigion) on 28th are perhaps precursors to yet another autumn influx. Elsewhere, singletons remained in Essex, Pembrokeshire and Wexford. After a couple of weeks' absence, the four White Storks turned up in Somerset again, this time at Thorney Moor on 27th–29th. It is a shame they didn't decide to try and nest this year, although, given the weather, who can blame them? Here's to a return in 2013.

Seawatching was again reasonable at best, although the latter half of the week saw some improvements out west. On 31st, 35 Cory's and 14 Great Shearwaters passed Mizen Head (Cork), with 8 Greats and 7 Cory's past Cape Clear the same day. A scattering of Long-tailed Skuas began to appear as the week progressed, while Sabine's Gulls included up to two lingering in Broadford Bay, Skye (Highland) on 28th–29th. There were still plenty of Pomarine Skuas knocking about, although Balearic Shearwater numbers remained low. 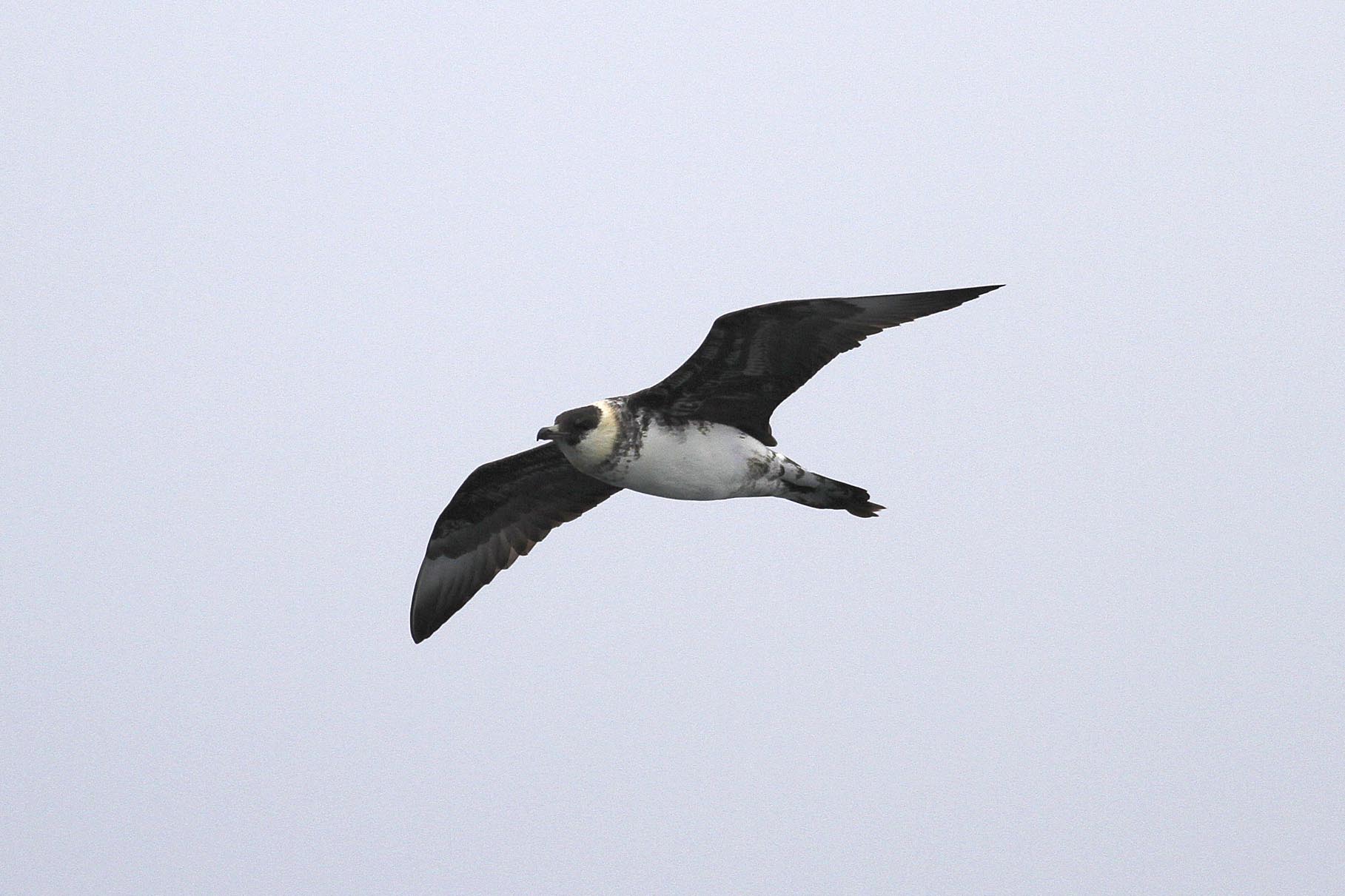 Somerset's drake Ferruginous Duck remained in residence at Blagdon Lake throughout the week. Another bird was found at the equally traditional location of Minsmere (Suffolk) on 1st, although subsequent reports suggested it had been present at least a week. Ruddy Shelducks included three still at Alkborough Flats (Lincs), and single birds at Snettisham (Norfolk) and Stocks Reservoir (Lancs). Offshore, up to two drake Surf Scoters were still at Blackdog (Aberdeenshire) to 31st.

Both Irish Snowy Owls were again noted this week: the female was still on Termon Hill, Blacksod (Mayo) on 27th with the male still on Arranmore Island (Donegal) the following day. Another bird was on St. Kilda (Outer Hebrides) on 30th; it had been present since at least mid-July. The summering Montagu's Harrier at Tacumshin (Wexford) remained throughout the week.

Two Hoopoes were reported on 26th. The first, at Meols (Cheshire), was a brief visitor only, but the bird at Bealad West (Cork) had apparently been present for three days. A single Bee-eater performed a couple of fly-bys at Titchfield Haven (Hants) on 28th and 29th, while an Alpine Swift over Sheringham (Norfolk) on 1st was one of two seen, the other over Portscatho (Cornwall) on 31st.

North Ronaldsay's magically reappearing Western Bonelli's Warbler was again seen on 30th, and the male Iberian Chiffchaff was still singing at Porlock (Somerset) to 29th at least. A male Red-backed Shrike spent the day at Cheriton (Hants) on 26th — could it be the recent London individual relocating? 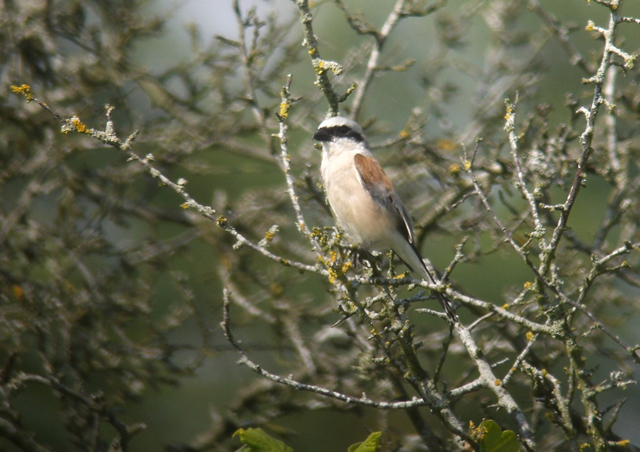 With August now upon us, both passerine migration and seawatching should hot up over the coming weeks. As for a predictions on what might be seen, how about a Swinhoe's Storm-petrel being pulled from a mist net during a Storm Petrel ringing session? One was seen off the Azores this week. Although a strange record for the time of year, many wouldn't mind a repeat of the twitchable Brünnich's Guillemot seen for two days in the Netherlands this week… 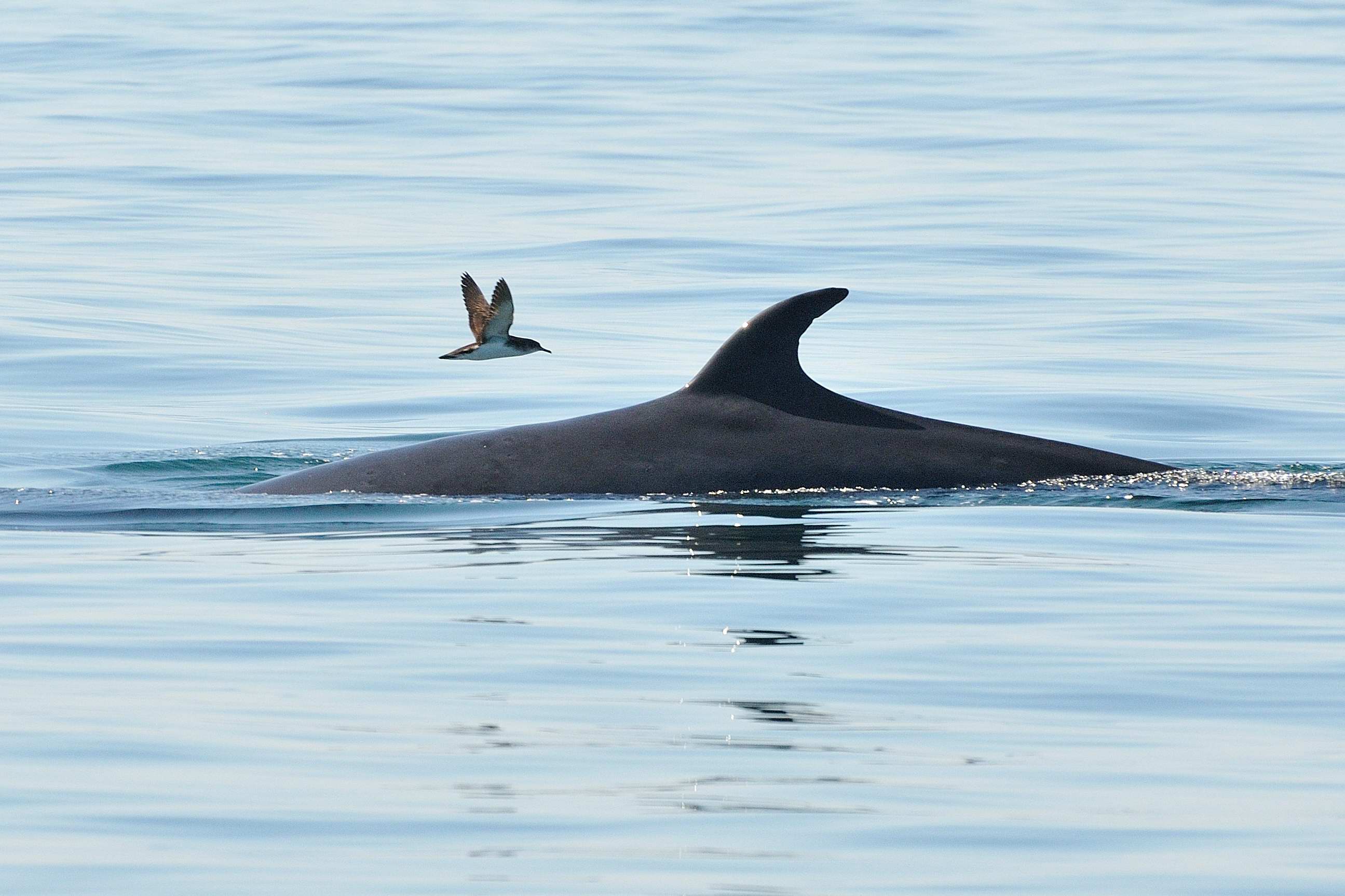 This week's Photo of the Week features a Manx Shearwater that's only small in the frame, with not much detail and not particularly well lit. So why did we choose it? Well, it also features a Minke Whale although, admittedly, not a good photo of a Minke Whale either, with only its back and dorsal fin visible. What this image does have, though, is a perfect juxtaposition of these two compositional elements in a highly evocative setting. It's the kind of image that, first of all, makes you feel you were present with photographer Brian Harrison on his pelagic trip off Dorset, enjoying the calm blue waters of a sunny summer afternoon. Secondly, it makes you feel lucky to have witnessed the natural spectacle of these two very different creatures coming together in their natural environment. Finally, it makes you respect the timing of the photographer for capturing the scene at the precise moment the creatures' paths crossed, the raised wings of the shearwater mirroring the raised fin of the whale. A well-deserved first Photo of the Week for Brian. 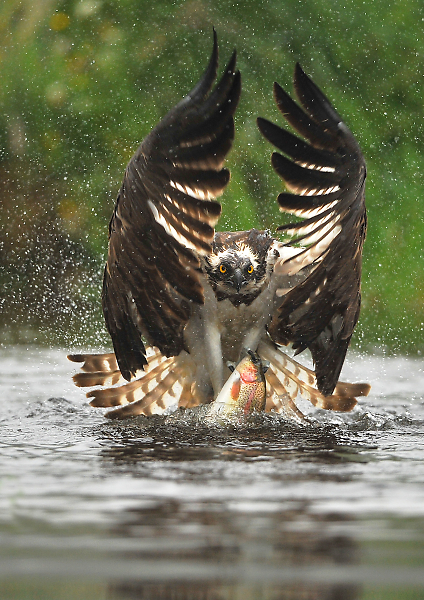 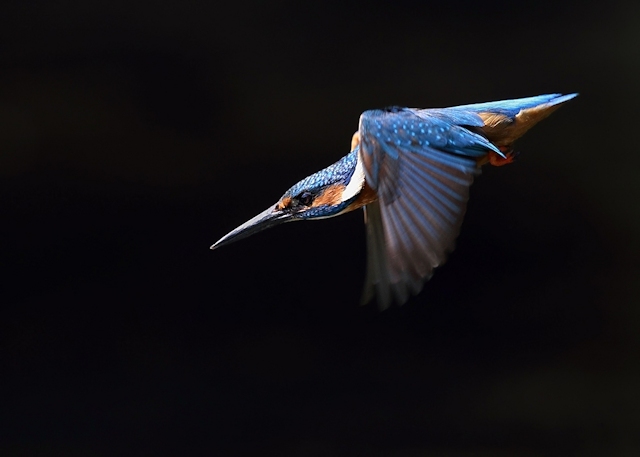 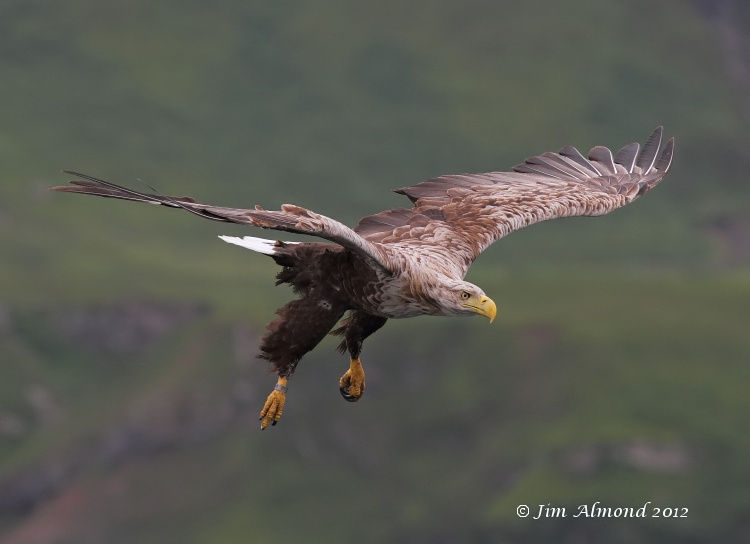 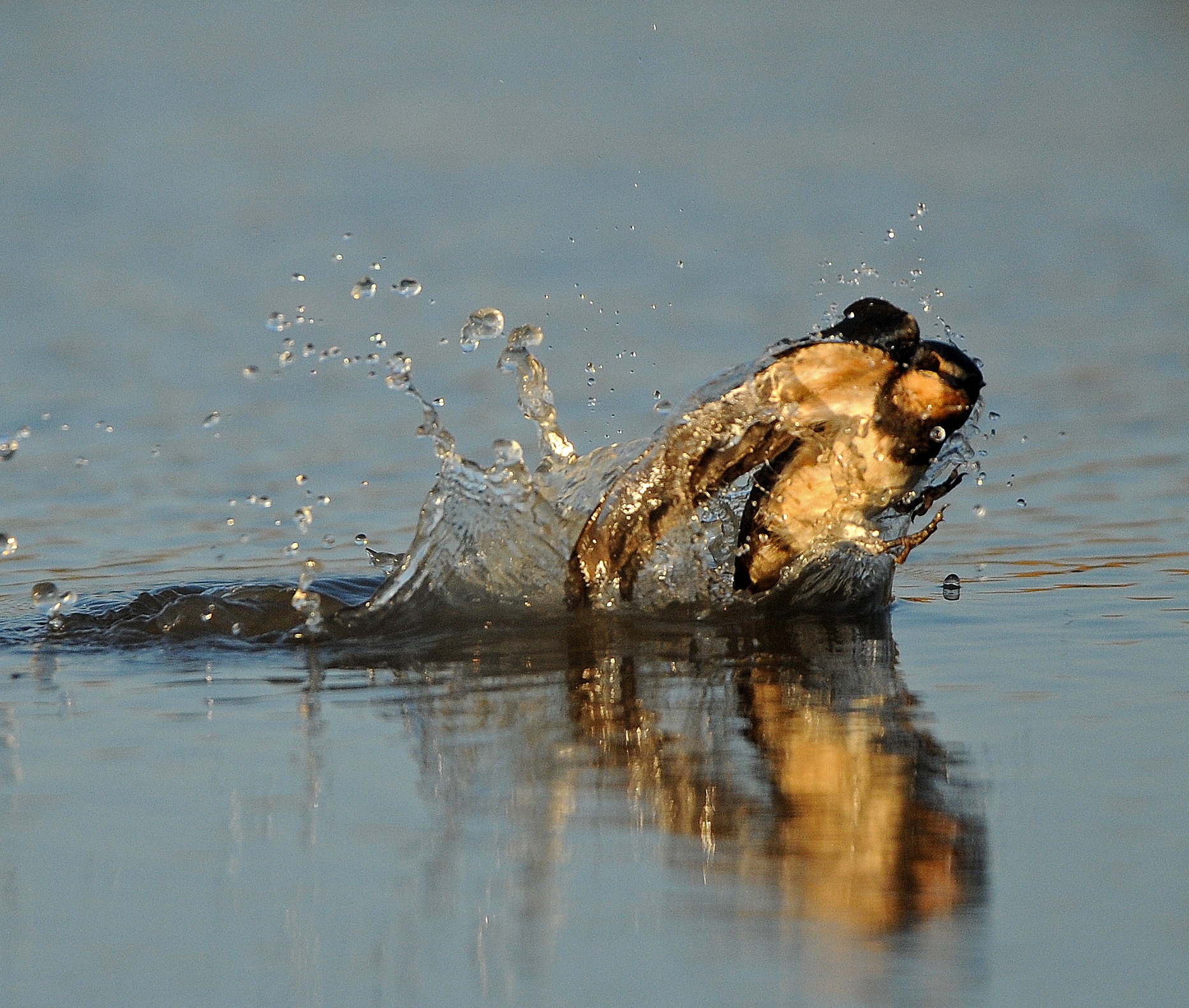 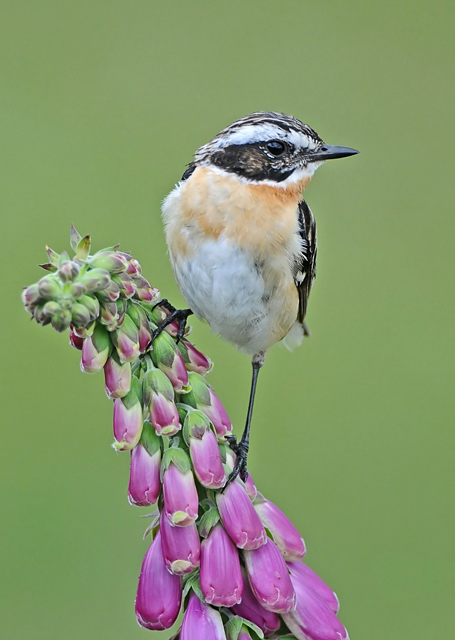 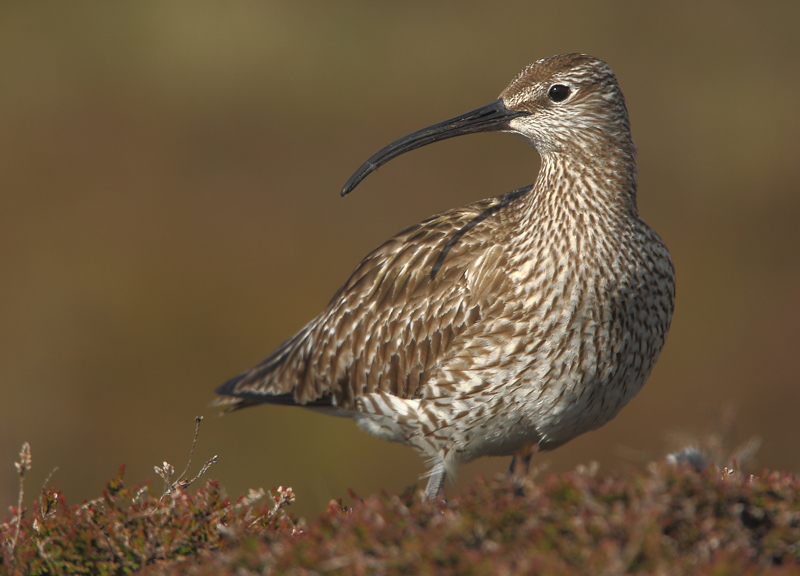 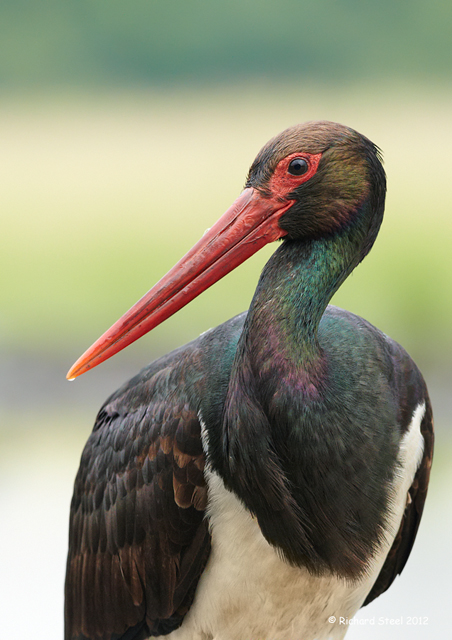 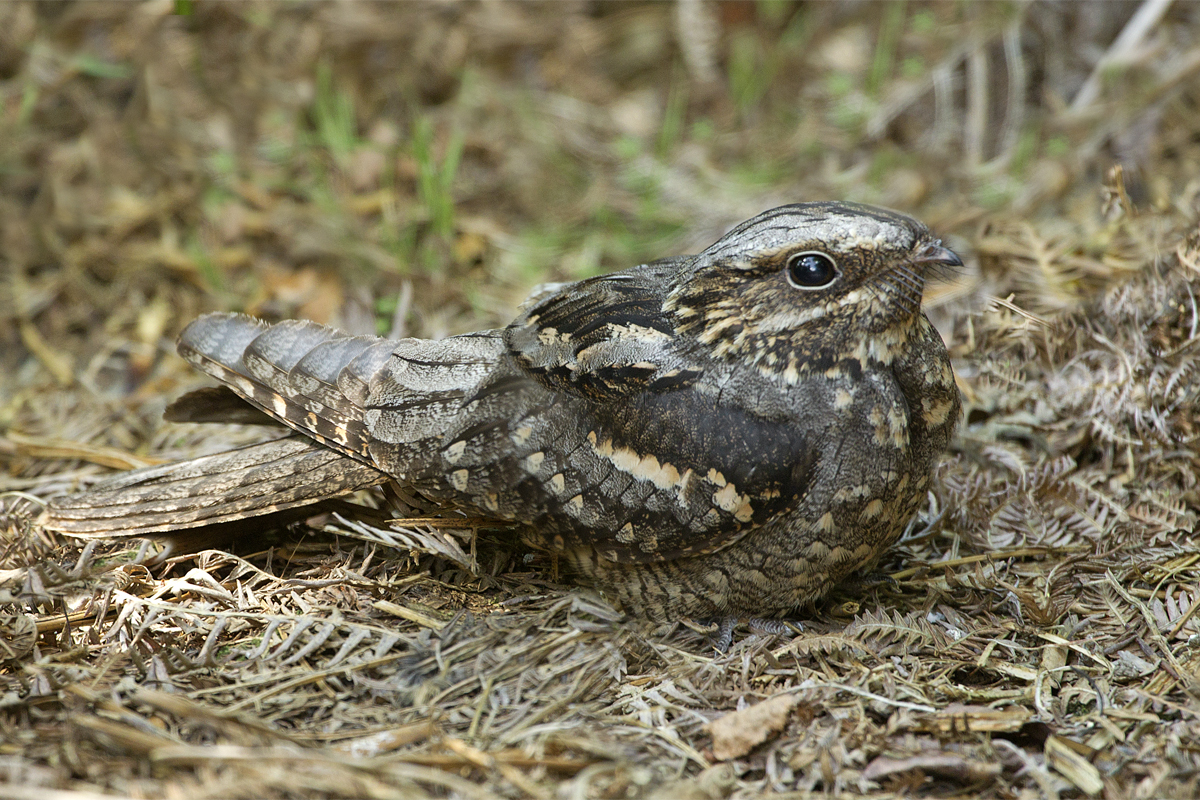 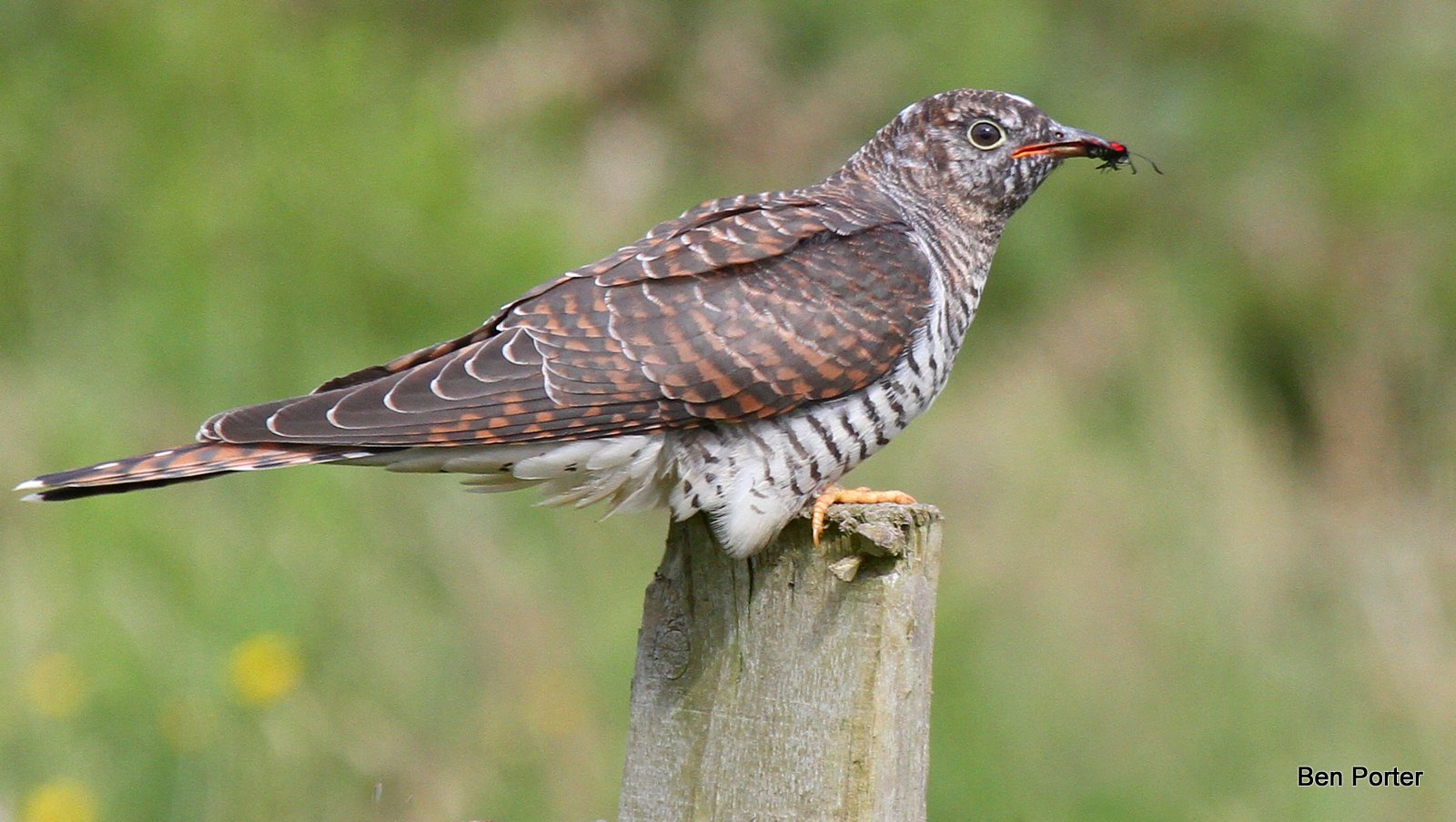 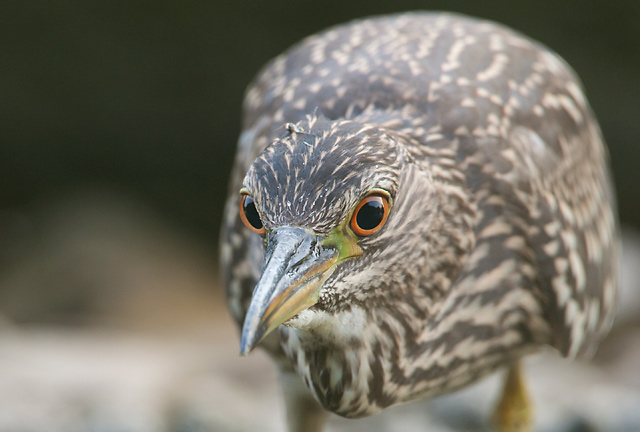 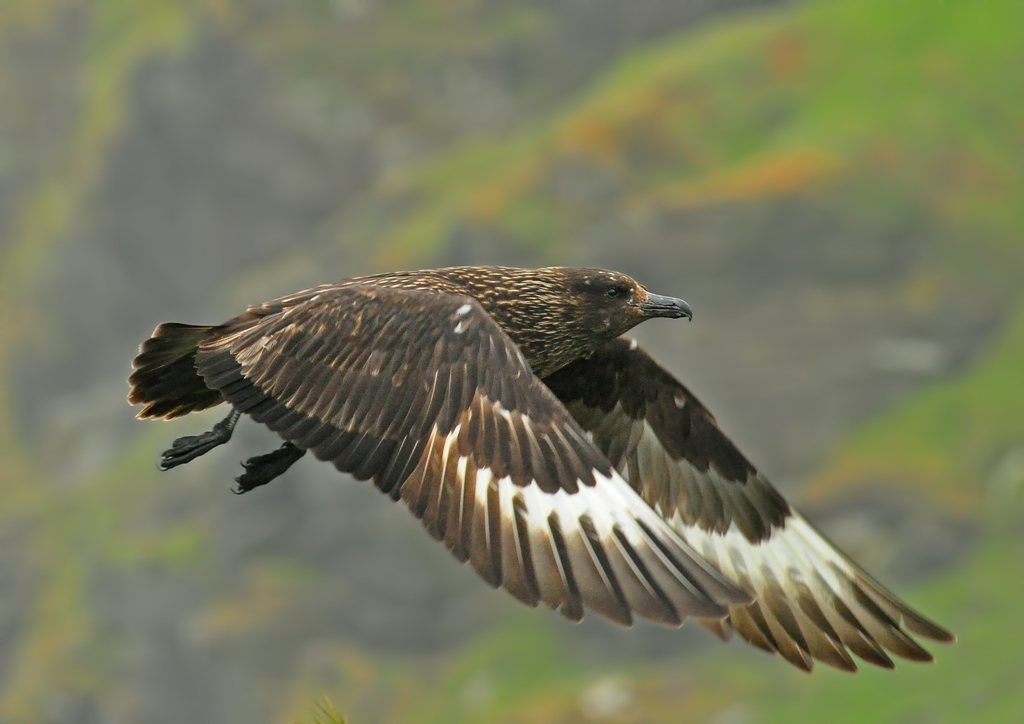 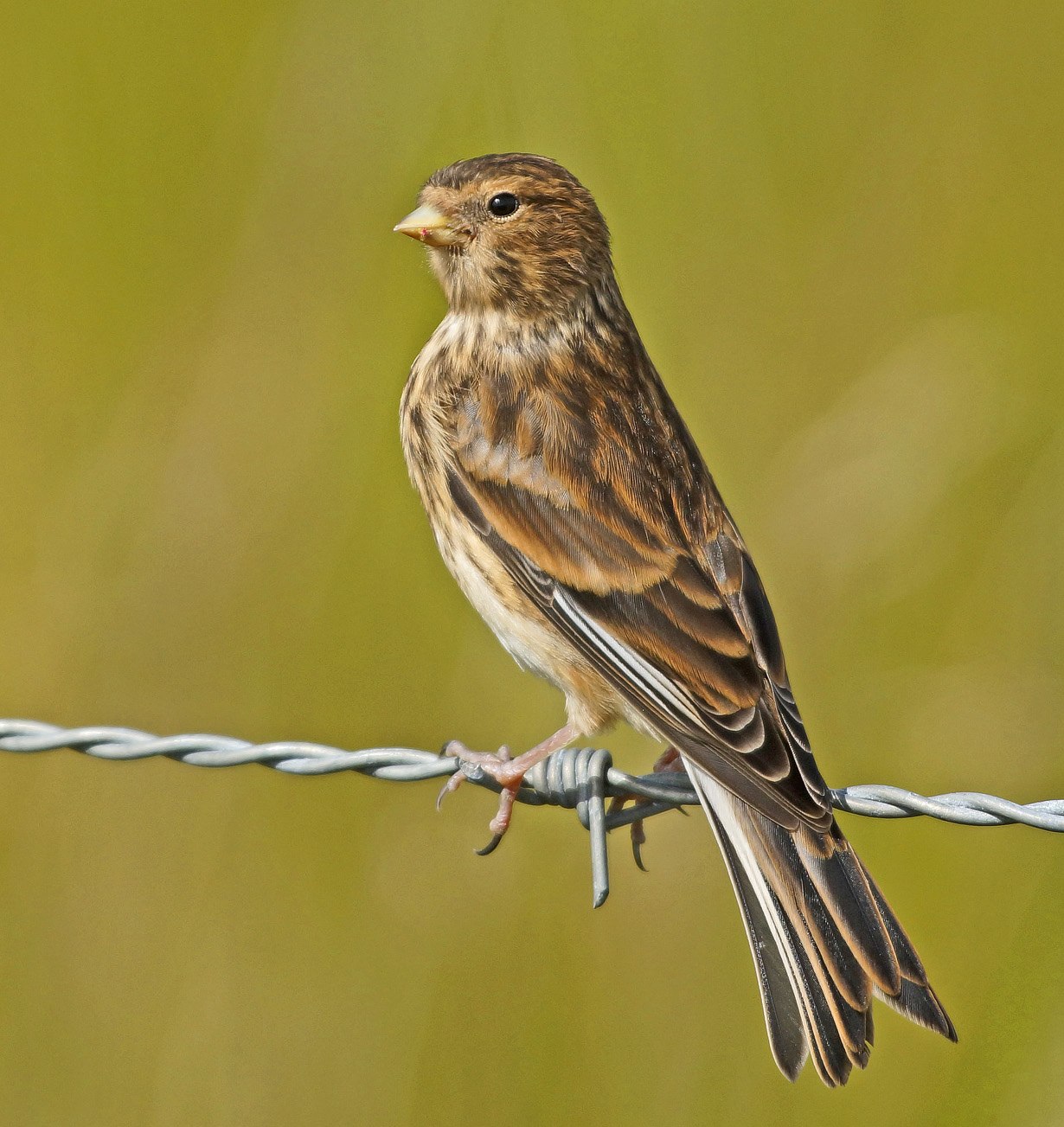