Ireland's third Greater Sand Plover on 2 May was the star turn of a busy Bank Holiday weekend. Present with Ringed Plovers on the bustling beach at Tramore, Co Waterford, it would go on to become the country's first twitchable individual, with many observers connecting that evening. Ireland's only other records concern one-day birds at Tacumshin, Co Wexford, on 20 July 2016 and Schull, Co Cork, on 21 April 2021. That evening, a female black-eared wheatear was found and photographed by a single lucky observer on the St Mary's, Scilly, golf course, although it would evade relocation for other birders on the island. Its warm plumage tones suggest it was likely a Western Black-eared Wheatear – the last twitchable example of this taxon hailed from the same island in October 2010. 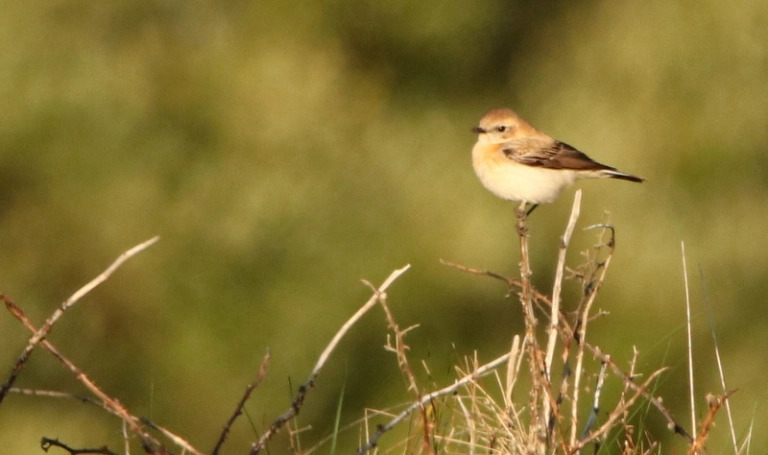 Co Wexford struck gold over the Bank Holiday weekend, with no fewer than two European Serins – at Churchtown and Great Saltee Island – Ireland's first twitchable birds in more than 20 years. The species is far more regular in Britain, particularly in the South-West; indeed, this week birds were at Porthgwarra, Cornwall, and both St Mary's and St Agnes, Scilly. Woodchat Shrikes appeared in the far South-West, with birds at Kenidjack Valley and Nanquidno Valley, Cornwall, alongside one on St Mary's, Scilly. The Isles were also treated to a few Golden Orioles, with individuals on St Mary's, St Agnes, Bryher and Gugh. 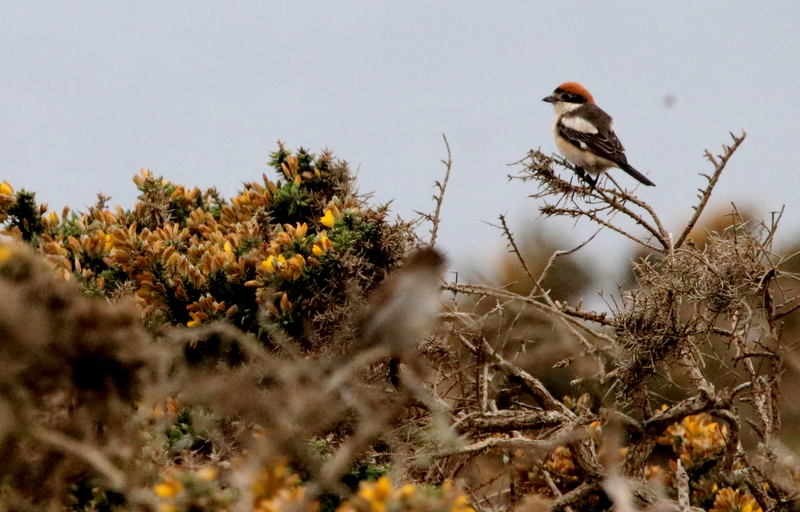 Cheshire's week included plenty of interest, not least the female Bluethroat at Leasowe on 28th. A Richard's Pipit was trapped and ringed on Hilbre Island on 26th too, while another was at Lizard, Cornwall, on 2nd. Unusually, the week's Wryneck tally showed a northern and eastern bias, with most of the week's 16 reports present between Norfolk, Lancashire and North Yorkshire. Hoopoe showed a more typical distribution: outliers away from southern and eastern England were present at Osmotherley Moor, North Yorkshire, and Achosnich, Highland, with others in Gloucestershire and Co Cork. The Fair Isle, Shetland, Greater Short-toed Lark lingered until 27th. The private Farnham GPs, North Yorkshire, was treated to a Little Bunting, Shore Larks were in Norfolk and Suffolk, and Dusky Warblers at three sites – Calf of Man, Isle of Man, Stiffkey, Norfolk, and Walthamstow Marsh, London. In Shetland, a Hornemann's Arctic Redpoll continued to perform at Hermaness NNR, Unst. A first-summer Pallid Harrier quartered over Sands of Forvie NNR, Aberdeenshire, from 26-30th, when a migrant Montagu's Harrier was noted in Norfolk. The Snowy Owl remained at St Kilda, Outer Hebrides, too.

An adult Black-crowned Night Heron at Slapton Ley, Devon, from 21st looks all but certain to be a returning bird – it is favouring the exact same tree as one last year. A rare London example was at Brent Reservoir on 2nd. Purple Herons were split between six counties, including a notable record high north over Gowy Meadows, Cheshire, on 26th. Glossy Ibises were again widespread, reaching as far north as two on Unst, Shetland. An unringed White Stork was at Berry Fen, Cambridgeshire, on 27-28th, at least one Spotted Crake remained audible at Wheldrake Ings, North Yorkshire, and an early Corncrake sang at Welney WWT, Norfolk, from 29th. One of the best finds of the week was a Broad-billed Sandpiper that visited Marshside RSPB, Lancashire, on 27th. Aside from being very early (there are just four previous April records of this species, with most coming in May and June), it marked a fine record for the North-West. It replaced the Black-winged Stilt that was last noted at the same site the previous day. Wales's first Kentish Plover since 2018 – a female – was at Goldcliff Pools, Gwent, on 30th. 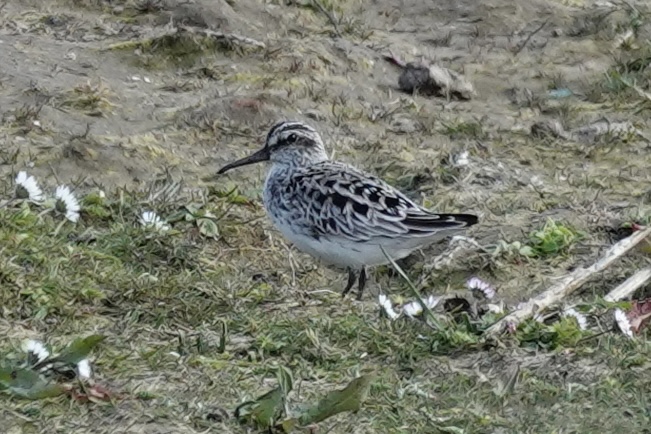 A popular female Black-winged Stilt appeared on an assuming lake behind a Newton Leys, Buckinghamshire, Asda, on 27th. Two in Norfolk were split between Hickling Broad and Welney WWT. 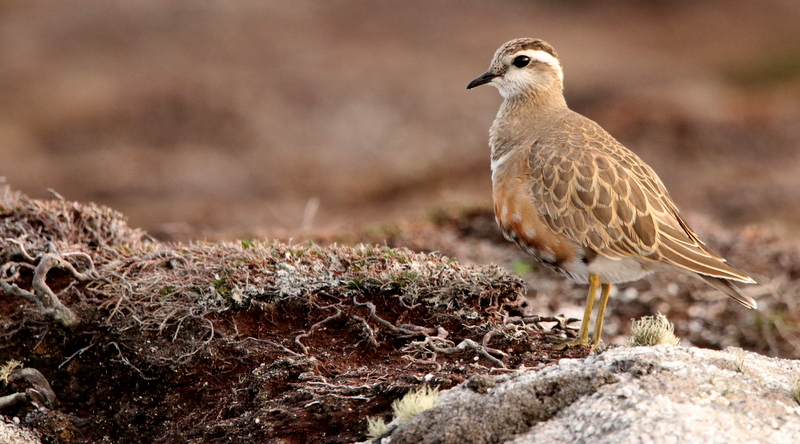 Temminck's Stints were reported from Rainham Marshes RSPB, London, Woolston Eyes, Cheshire, and Block Fen GPs, Cambridgeshire; the Rainham bird may have been the individual previously in north Kent, while the Cheshire record stood out. Eurasian Dotterel were sighted at 11 sites. A brief Eurasian Stone-curlew visited Beddington Farmlands, London, on 29th, with one sound-recorded over Biggleswade, Bedfordshire, two days previously. The Pacific Golden Plover was last noted at Carlton Marshes, Suffolk, on 26th. Cheshire's first Ferruginous Duck since 1995 gave county birders plenty to crow about on 30th before a prompt disappearing act. What looks likely to be the same bird – an unringed female – resurfaced at Grimley, Worcestershire, on 2nd. A new Ring-necked Duck was on Lewis, Outer Hebrides, with birds at 13 sites in total. Blue-winged Teal lingered at Tacumshin, Co Wexford and Berry Fen, Cambridgeshire. Two possible were at Old Head of Kinsale, Co Cork, on 28th, while the likely Cinnamon Teal remained at Marlow, Buckinghamshire. Northumberland's drake American Wigeon continued to commute between East Chevington and Cresswell Pond, while a possible was at Hale, Cheshire, on 2nd. Shetland and Northumberland scored new Green-winged Teal, with others lingering at four sites. A young drake King Eider off Marske-by-the-Sea from 30th made for a rare north-east record and just Cleveland's second after one in July 1998. Others were still in Scotland at Musselburgh, Lothian, Loch Fleet, Highland, and Ythan Estuary, Aberdeenshire, with Surf Scoter still off Musselburgh, Lothian (two), and Tresco, Scilly. South coast Pomarine Skua action kicked off in fairly unexceptional fashion from 25th, with a high count of 18 past Dungeness, Kent, on 1st. In total, 17 sites got in on the act, while two early Long-tailed Skuas flew past Aird an Runair, North Uist, Outer Hebrides, on 1st. White-billed Divers flew past Durham and Northumberland on 26-27th; the long-staying Pied-billed Grebe was reported again at Loch Feorlin, Argyll, on 28th. After a run of Bonaparte's Gull records along the nearby River Loughor in recent years, Sandy Water Park, Carmarthen, hosted a showy adult on 27th. Another was still at South Slob, Co Wexford. In Co Galway, the Ross's Gull held on at Mutton Island. A slight push of Black Terns saw no fewer than 40 power past Goldcliff Point, Gwent, on 2nd, with 47 reports throughout the week. Looking set to become an ever-present fixture for the second summer in a row, the Black-browed Albatross proved largely reliable at Bempton Cliffs RSPB, East Yorkshire, for another week. A number of rare cetaceans were recorded this week, albeit in unfortunate circumstances. Two Striped Dolphins were stranded in the South-West Approaches on 28-29th; one on St Mary's, Scilly, followed by one near Lizard Point, Cornwall. Thankfully, a Pygmy Sperm Whale at Glengarriff, Co Cork, on 1st was able to refloat itself as the tide rose.

A remarkable two Yellow-billed Kites were recorded in Europe this week – at Cape Põõsaspea, Estonia, on 25th and in northern Serbia on 26th. A largely sub-Saharan relative of Black Kite, Europe's first was recorded just last spring when one migrated through The Netherlands, Germany and Denmark.

Turkey's impressive run of Greater Hoopoe-Larks saw three discovered at Hancağız Dam, Gaziantep, on 27th; another was in southern Malta on 22nd. Bulgaria saw a notable influx of White-tailed Lapwings, including a high count of six at Shabla. In Spain, the male Black-and-white Warbler at Sant Joan de Mediona, Catalonia, lasted into May and began to look resplendent in its summer regalia. Elsewhere, three Lesser Flamingoes were again at Laguna de Fuente de Piedra and the tame Red-billed Tropicbird at Caleta de Fuste continued to prove a popular draw for visitors to Fuerteventura, Canary Islands. In the Azores, an adult Yellow-crowned Night Heron remained in the harbour at Ponta Delgada, São Miguel.

A dapper male Common Rock Thrush at Borreby, Denmark, on 30th would unfortunately expire shortly after location. An Alpine Accentor was at Skagen on 2nd; the previous day a Lesser Spotted Eagle-Black-winged Kite duo flew in-off the sea at Hyllekrog, Zealand. In Finland, a drake Black Scoter was inland at Tiuruniemi.

The Pygmy Cormorant and Western Swamphen both continued in The Netherlands. Switzerland's first Moltonis Warbler was in Ticino.