A change in the weather coincided with considerably improved birding around Britain and Ireland, with the unsettled conditions and brisk south-westerlies of the weekend bringing with them an exciting few days of sea-birding, as well as the much-needed rain producing a great crop of late summer waders.

Undoubted highlight of the week was an unusual Pterodroma seen passing Porthgwarra, Cornwall, early afternoon on 29th, on which the general consensus seemed to favour an pale-morph Trindade Petrel. Given its relative regularity off the Eastern Seaboard of the United States, plus around a dozen well-documented records from the Azores, it's fair to say that Trindade wasn't quite loitering in the utterly outlandish category of potential additions to the British list, but it was nonetheless always going to be a long shot. And that one should be multi-observed from land was all the more impressive, given that this always seemed like the sort of species that would suddenly cruise by a pelagic boat in the South-West Approaches, seen all too briefly but grippingly photographed at the same time.

Somewhat more expected, although still undoubtedly setting the pulse racing when seen from land in Britain or Ireland, were four records of Fea's-type Petrels. The first scythed past Ballycotton, Co Cork, on the evening of 26th, with a second flying past Porthgwarra the following morning. The third was again in Co Cork, this time off Mizen Head mid-morning on 28th, with a fourth passing Carnsore Point, Co Wexford, on 30th. Also in Ireland, a singleton of the near-mythical Barolo Shearwater flew past Bridges of Ross, Co Clare, on 31st.

The same conditions brought a good flush of large shearwaters to south-western areas, with 92 Great and 36 Cory's Shearwaters passing Porthgwarra on Sunday, following 161 Cory's there on the Saturday. Similar numbers of both species were seen in Irish waters throughout the week, with seawatches from the likes of Ballycotton, Mizen Head and Cape Clear all scoring tens of both species, although totals peaked off the hot-spot of Galley Head on 27th, when 51 Cory's and 335 Greats passed. 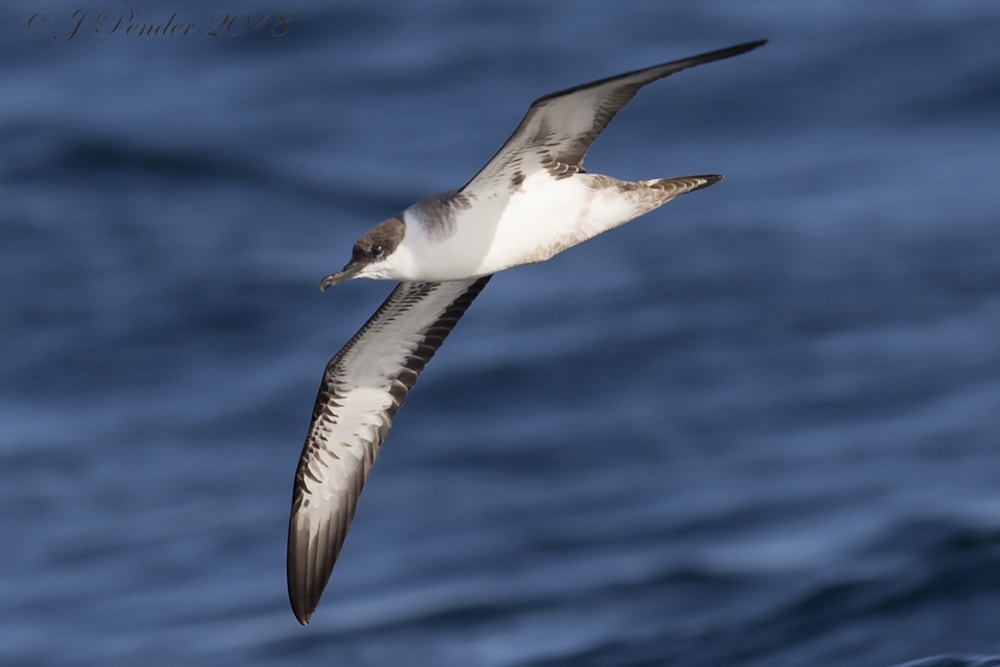 Back in England, a Great Shearwater was even seen as far east as Dungeness, Kent, where it lingered offshore on 29th, with other notable records from Portland Bill, Dorset, and Orcombe Point, Devon, that day. Another was seen off St Catherine's Point, Isle of Wight, on 30th.

Associated with the fruitful conditions was the sudden build up of Wilson's Storm Petrels to record-breaking numbers in waters off south-west Co Cork, where a phenomenal 59 were seen from a pelagic on 29th. Two also passed Lizard Point, Cornwall, that day, with one seen from the Scillonian crossing on 28th and two from a Scilly pelagic on 26th increasing to five on 30th.

It was also a much-improved week for returning waders, with no fewer than three Marsh Sandpipers recorded. The first was at Scaling Dam Reservoir, Cleveland, on 25th, although it proved elusive throughout the day and was only identified just a few minutes before it flew off in the evening, never to be seen again. A juvenile was then found at Devoran Quay, Cornwall, on 26th, where it showed fairly well into the evening, but it had moved off by the following morning. Then, on 27th, a fantastic London record concerned a juvenile found at Rainham Marshes. It showed throughout Saturday and again early on the Sunday, before flying off and presumably relocating east to Cliffe Pools, Kent, where a bird arrived mid-afternoon, staying until early on 30th. 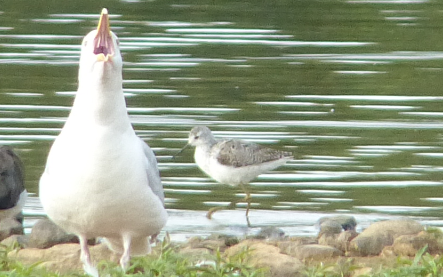 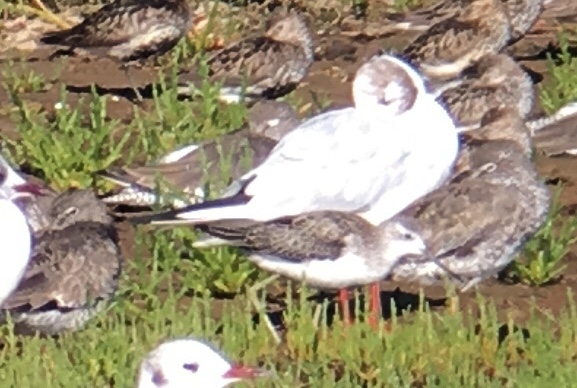 An adult Semipalmated Sandpiper was at Kilnsea Wetlands, East Yorks, on 27th, before relocating south to Snettisham RSPB, Norfolk, on 29-30th. Another at St Ouen's Pond, Jersey, from 28th represented a first for the island. Back in Norfolk, the long-staying Lesser Yellowlegs remained on show at Titchwell RSPB, while another adult was a brief visitor to Wrafton, Devon, on 30th. No fewer than eight Pectoral Sandpipers arrived, including birds in Cornwall and the Outer Hebrides, which suggested fresh transatlantic vagrancy off the back of the week's inclement weather. A pristine Pacific Golden Plover was a brief visitor to Findhorn Bay, Moray, on 31st, but didn't linger to be twitched. 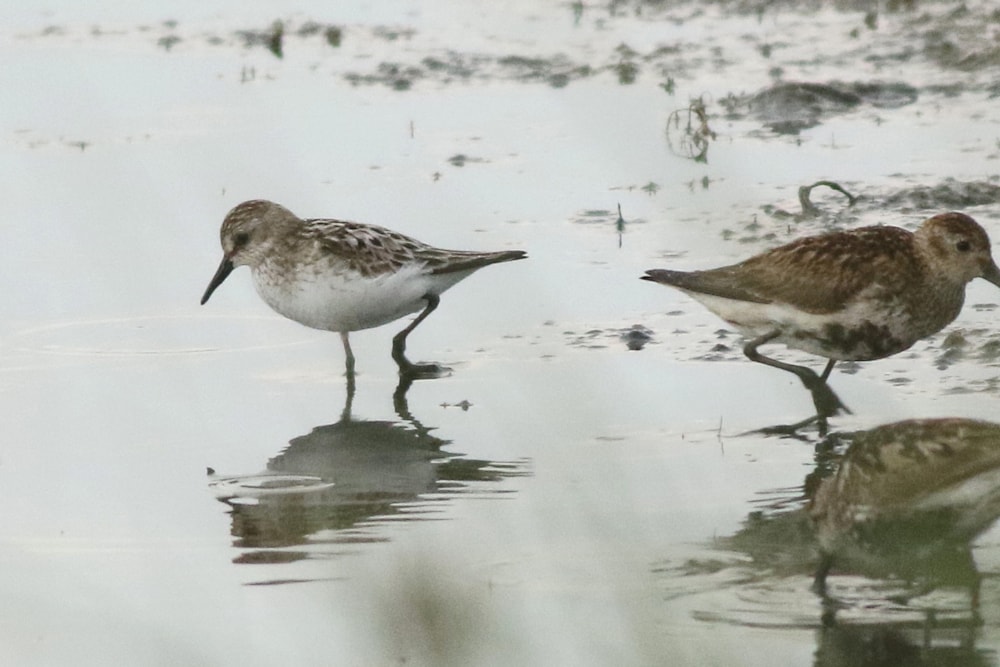 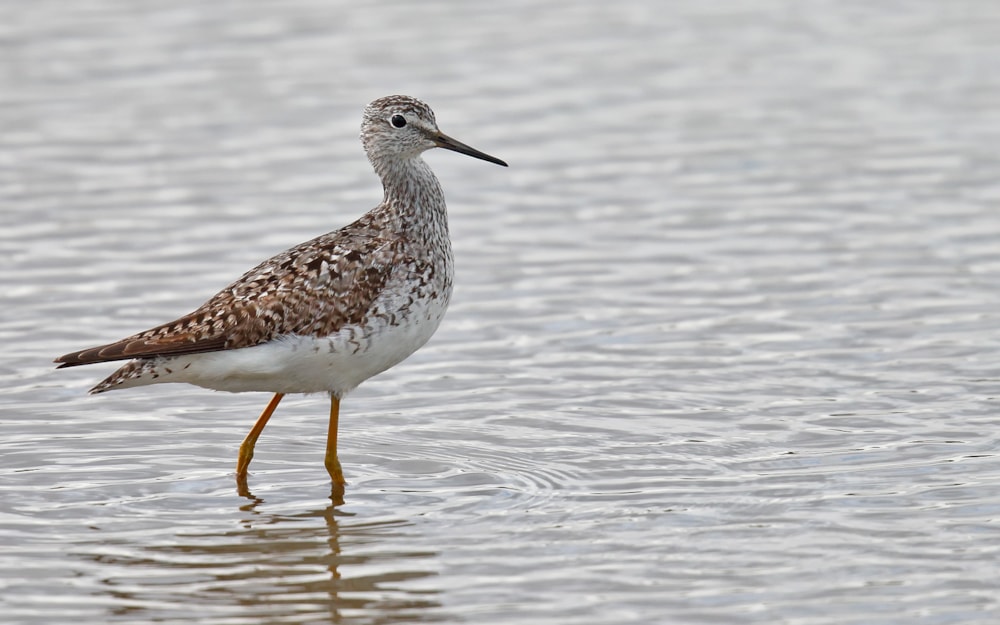 A juvenile Red-necked Phalarope was at St John's Pool, Highland, on 27-28th, while there were moulting adults at Branton Gravel Pits, Northumberland, on 25th and at both Oare Marshes, Kent, and Frampton Marsh, Lincs. Arriving in good numbers this week were Curlew Sandpipers, with numbers peaking on 30th. An impressive 50 were at Frampton Marsh, Lincs, with 32 at Gibraltar Point, 20 at Titchwell, Norfolk, and 19 at Old Hall Marshes, Essex, among the more significant tallies. 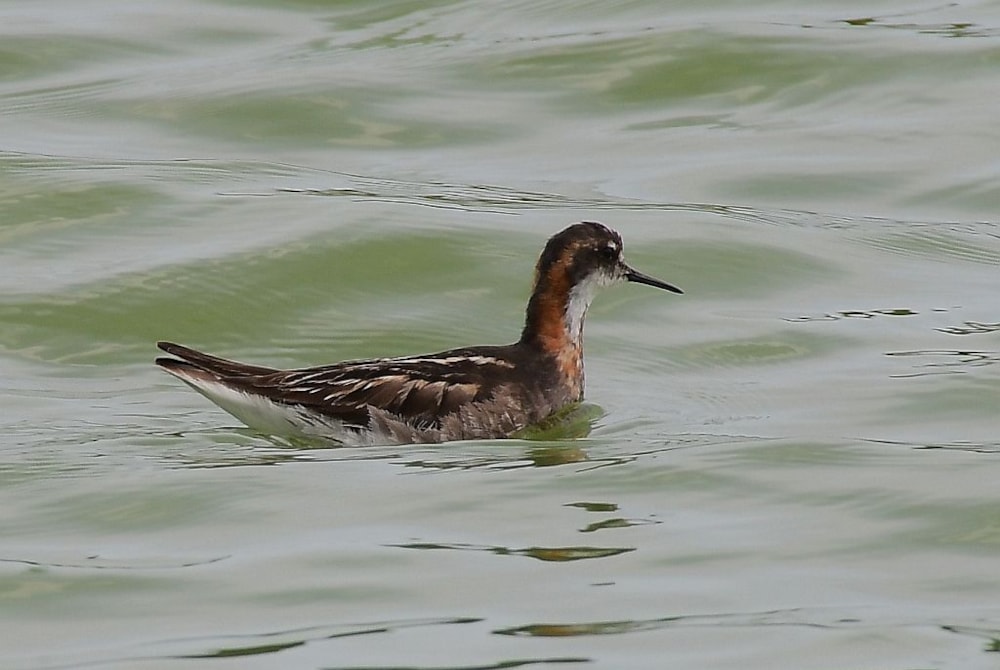 'Most twitched' must of course go to the Sooty Tern, which was still showing well at Ythan Estuary, Aberdeenshire, on 25-26th. It then took an away day, with no sign throughout 27th, but was back on the Ythan early morning on 28th, again showing throughout the day. There was again no sign on 29th, this curiously coinciding with a report of a fly-by Sooty Tern in Germany, before it returned to the Ythan on brief occasions late morning on 30th and mid-afternoon on 31st. 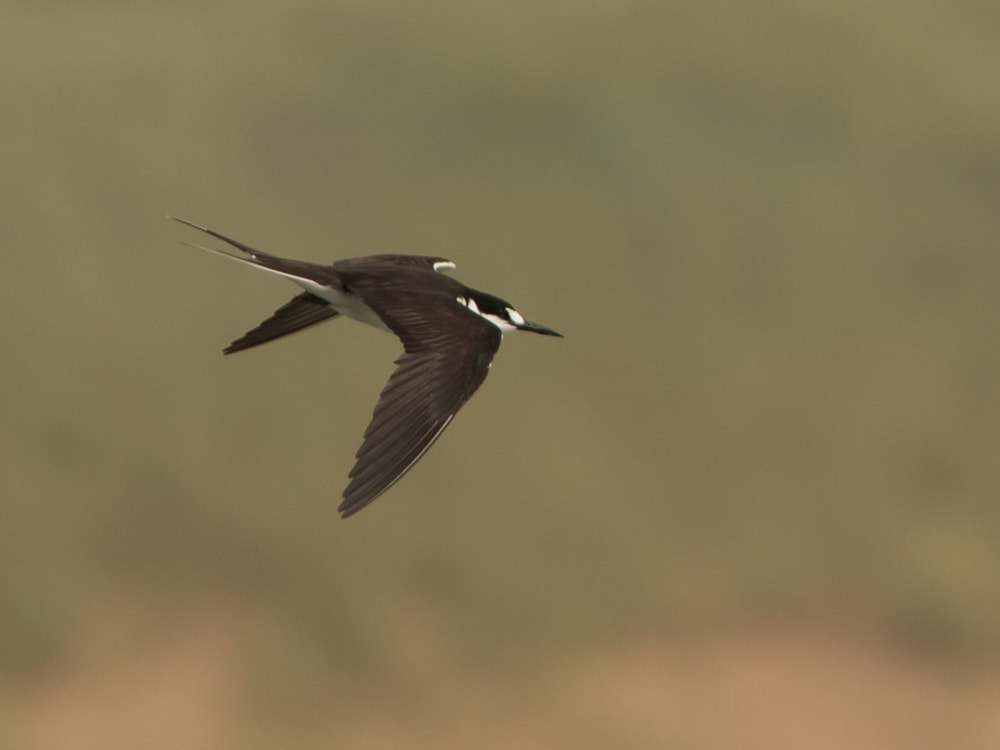 The adult Franklin's Gull regularly called in at Scaling Dam Reservoir, Cleveland, to 29th, although was clearly visiting elsewhere and was picked up at nearby Lockwood Beck Reservoir on 27th. Meanwhile the regular Bonaparte's Gull remained on show at Oare Marshes, Kent, and the apparent Baltic Gull in Sheffield, South Yorks, was noted to 28th – although it originates from a bewildering colony in which a proportion of birds clearly do not match the classic fuscus phenotype.

An adult White-winged Tern visited Frampton Marsh, Lincs, on 26th, coinciding with a good arrival of Black Terns on the same day. Most reports concerned ones and twos, although a few double-figure counts were made, including 25 off Hill Head, Hants, where a white-ringed bird (ringed as an adult on migration in Spain) was noted. Unusually for late July, a breeding-plumaged Green-winged Teal was found at East Chevington, Northumberland, on 26th, with presumably the same bird relocating south to Dorman's Pool, Cleveland, from 27th. A drake Surf Scoter was in the Sound of Taransay, Outer Hebrides, on 27th, while a drake showed well off Blackhall Rocks, Co Durham, from 28th.

The elusive Purple Heron continued to frequent Rutland Water throughout the week, although would remain unseen at Burley Fishponds for long periods. Meanwhile, on the Somerset Levels, the adult was again seen at Shapwick Heath, Somerset, to 27th. Rutland Water also held one of just two Glossy Ibises this week, the other seen at Oare Marshes, Kent. Western Cattle Egrets were a little more numerous, with eight sites holding the species, including four at Catcott Lows, Somerset.

Passerine migration appeared to get going, with small numbers of Pied Flycatchers dotted along the British east coast and the first Icterine Warbler of the autumn on Fair Isle on 27th, with another following on Unst the following day, with a Marsh Warbler also on the latter island. No fewer than 12 Rosy Starlings were seen, all on Scottish islands, save for a bird on mainland Argyll. Of these, notable records included two together on St Kilda on 27th and up to three on Tiree. 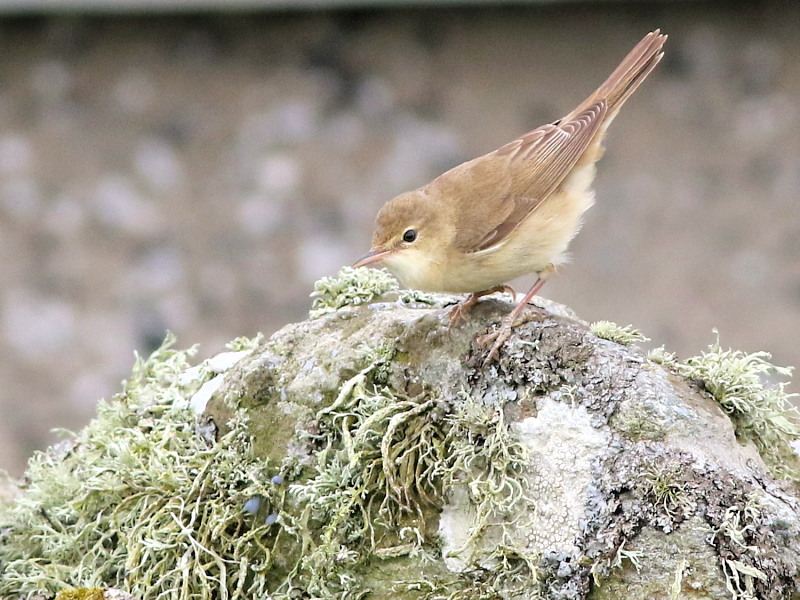 Other odds and sods included an Alpine Swift briefly loitering over Titchwell, Norfolk, on 31st and a handful of European Honey Buzzards on the move, including an unusual Northern Irish record from Banagher Glen, Co Derry. Both the Eastern Subalpine Warbler on Fair Isle and the Savi's Warbler at Minsmere, Suffolk, were also still in residence.

Arguable find of the week was the Yellow-billed Kite just north of Eilat, Israel, which represented the third national record of this African raptor, although late news of a Plumbeous Water Redstart reportedly photographed at Opukskyi Nature Preserve, Crimea, Russia, in late October 2017 certainly pricked birders' ears and a Blue-naped Mousebird at Tamanrasset, Algeria, represented a national first (although was perhaps somewhat overdue). 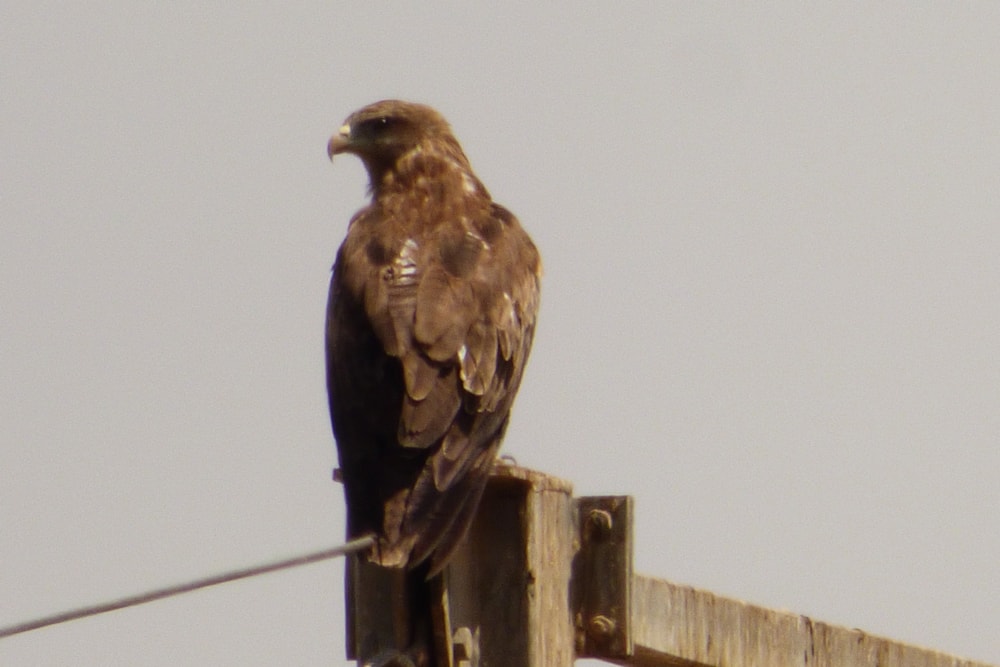 Closer to home, a report of a Sooty Tern past Sylt, Germany, on 29th coincided with the disappearance of the Scottish bird, although the timings of the last sighting on the Ythan Estuary and the fly-by at Westerland are too close for it to realistically account for the same bird. Meanwhile, the Black-browed Albatross was last noted on 25th.

A moulting adult Bonaparte's Gull at Thorsminde represented just the sixth for Denmark, while both the Spur-winged Lapwing and Long-legged Buzzard remained on show in The Netherlands and a Franklin's Gull was seen near Bonn, Germany, on 27th. British birders have been wondering what happened to the American Royal Tern after its all-too-brief visit to the south coast in June – well, it appears to be back in northern France. It was photographed at Granville, Manche, on 25th.

There were up to four breeding attempts by apparent Elegant Terns in Spain this summer, albeit only one pure, with three of them involving mixed pairings with Sandwich Terns. As post-breeding dispersal commences, these birds begin to pop up along the southern Spanish coast, with two at Llobregat Delta, Barcelona, on 31st. Elsewhere, a Rüppell's Vulture was over Tarifa on 28th.