The week was something of a re-run of the last, with just one significant find over the past seven days. That that seems almost surprising is credit to this brilliantly productive winter. In a normal year, the late January days tend to be short, grey and often largely birdless, at least in terms of major rarities. So the continued presence of all of last week's highlights was as much a blessing in itself, allowing birders plenty of opportunities to boost year lists while enjoying a productive day's birding.

That single headline find was a Red-flanked Bluetail in an unsuspecting tract of woodland just to the south of Caerphilly, Glamorgan, on 26th. It was still there to 29th, although could be rather elusive. Ten years ago, a wintering bluetail might have been bird of the year, let alone bird of the winter. But, in winter 2016/17, it finds itself relegated (undeservedly!) to an also-ran when competing alongside the long list of brilliant birds that have been entertaining us for some weeks now. Given where this bird is, it's another example that only serves to highlight that just about anywhere can turn up an exciting wintering 'Sibe'. We've said it on more than one occasion since winter arrived, but there must be so much out there waiting to be found ... 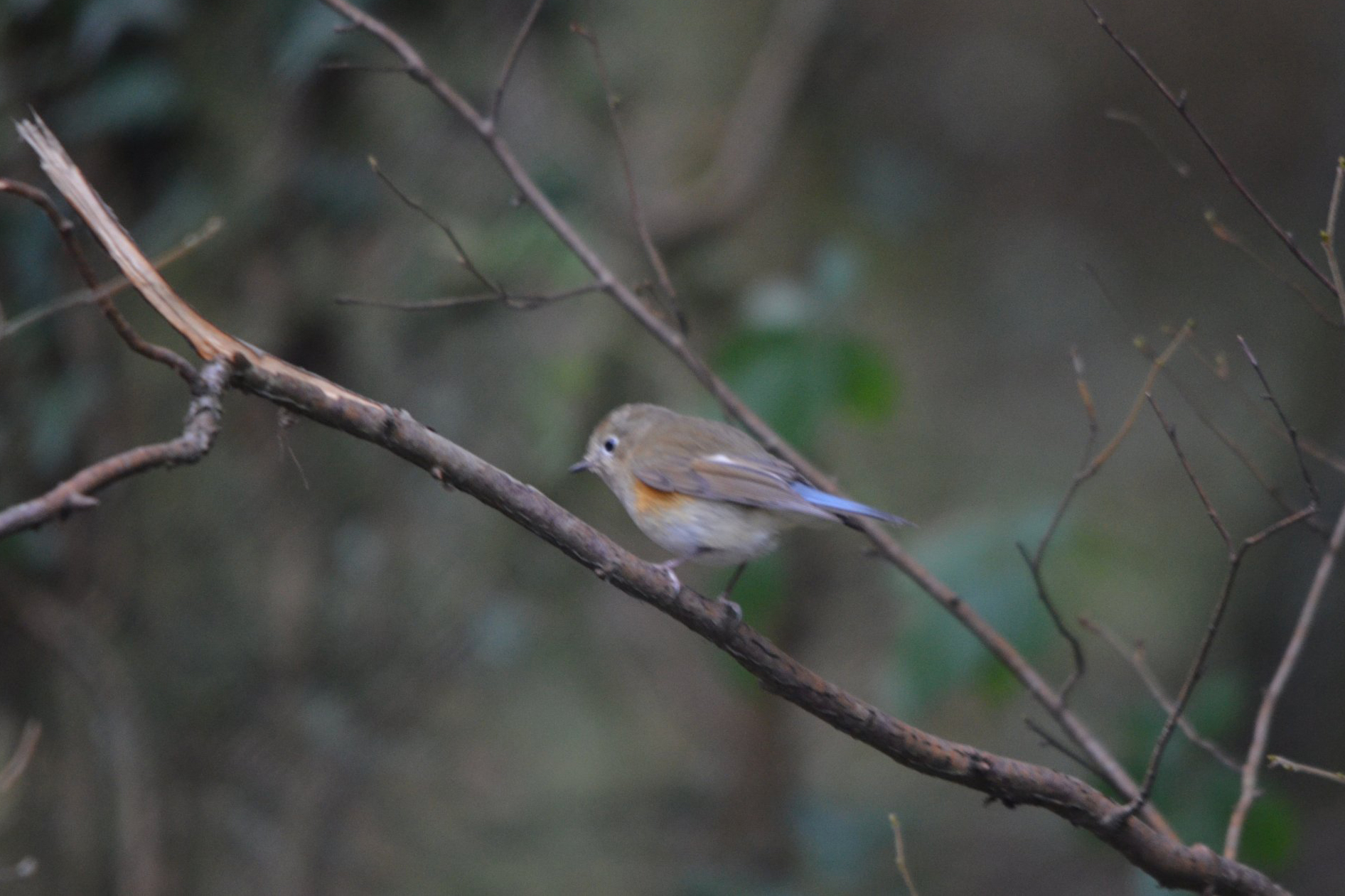 Lincolnshire's White-billed Diver continues to roam along a stretch of the River Witham between Woodhall Spa and Stixwould. It remains in good health, which is always reassuring with inland divers, and has been the most popular bird of the past seven days — large numbers of birders made the journey to mid-Lincolnshire, particularly over the weekend, to enjoy superb views of this confiding Arctic visitor. 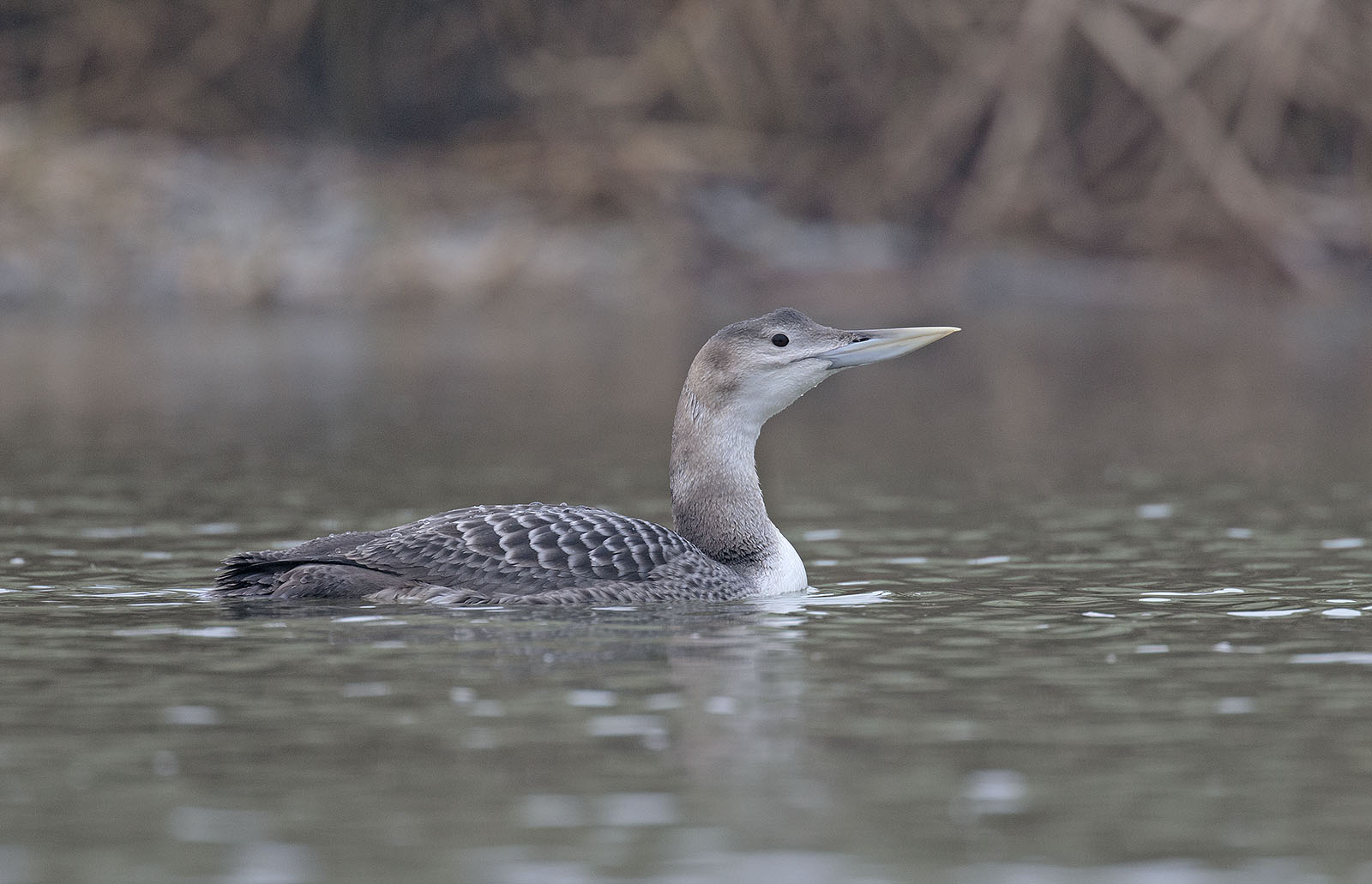 In Northumberland, the Pacific Diver lingered all week. It remained at Druridge Bay Country Park to 28th but was back at nearby East Chevington from 29th. The altogether longer-staying adult also remained off Penzance, Cornwall, to at least 30th. Nearby the Hudsonian Whimbrel continued at Perranuthnoe to at least 28th. 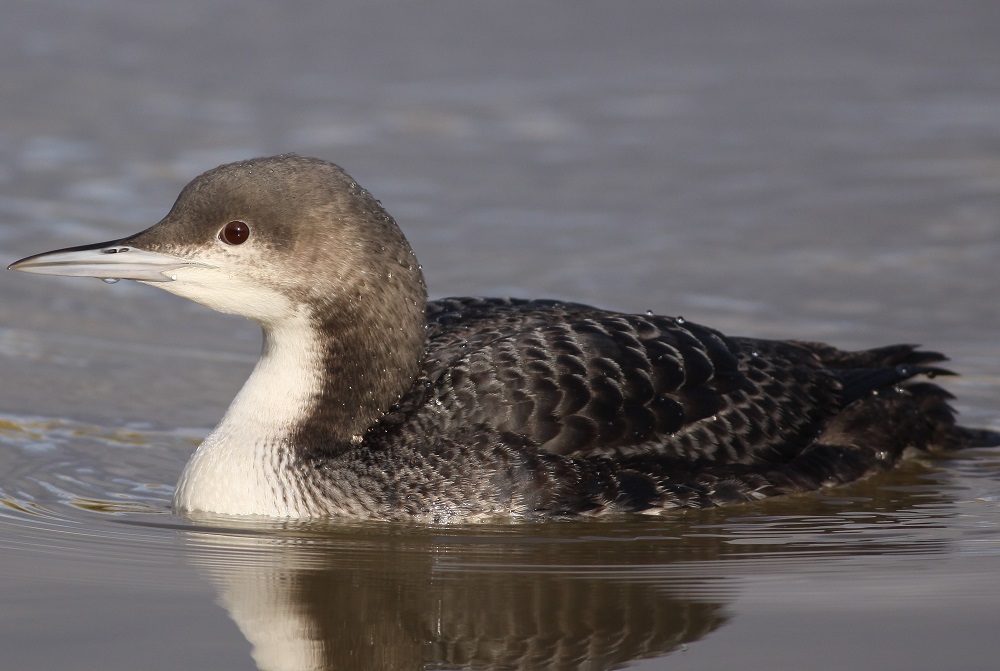 Both of last week's Pine Buntings were still around. The Kent bird was eventually relocated coming to a seeded area at Little Murston Nature Reserve late on 25th and showed on and off for the rest of the week, albeit mainly at distance. The Yorkshire bird, the smarter-looking of the two males currently on offer, continued to roam around fields at Dunnington but remains tricky to pin down due to its mobile and elusive nature. 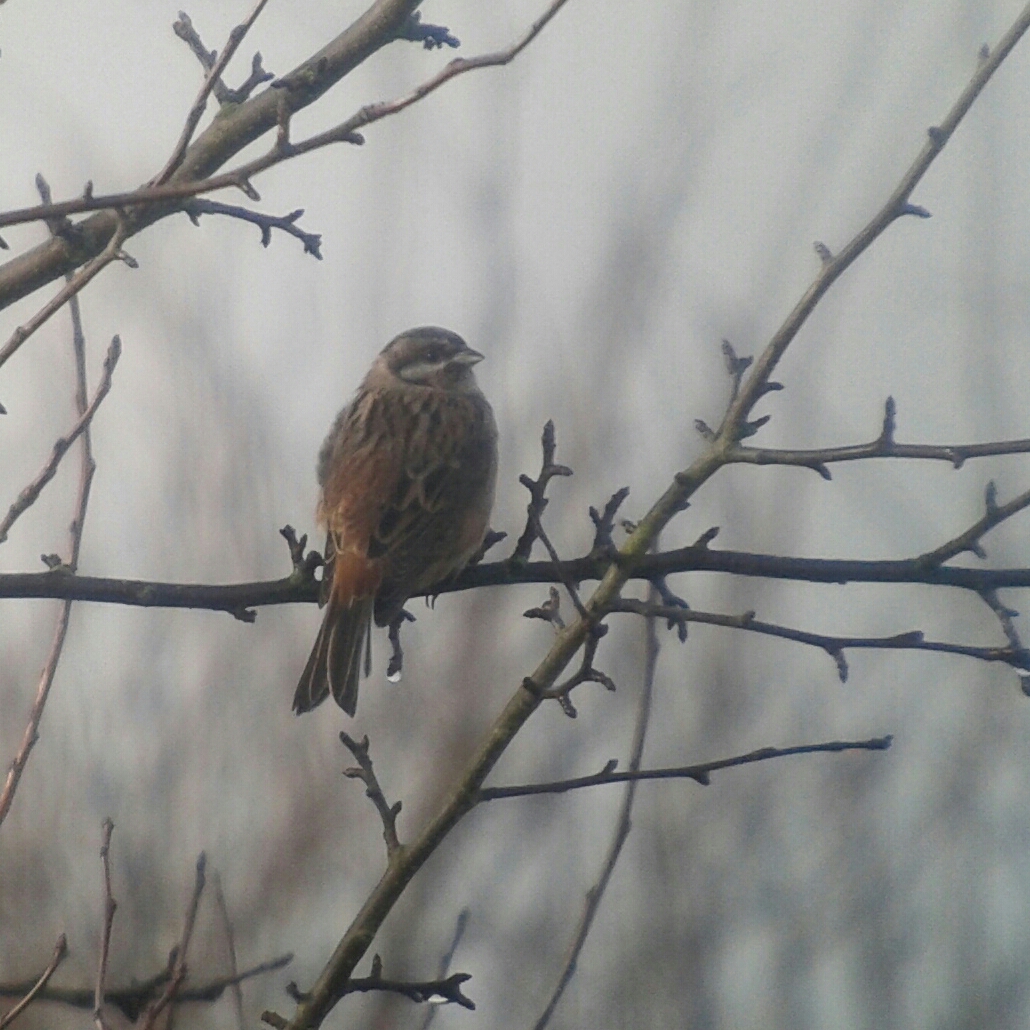 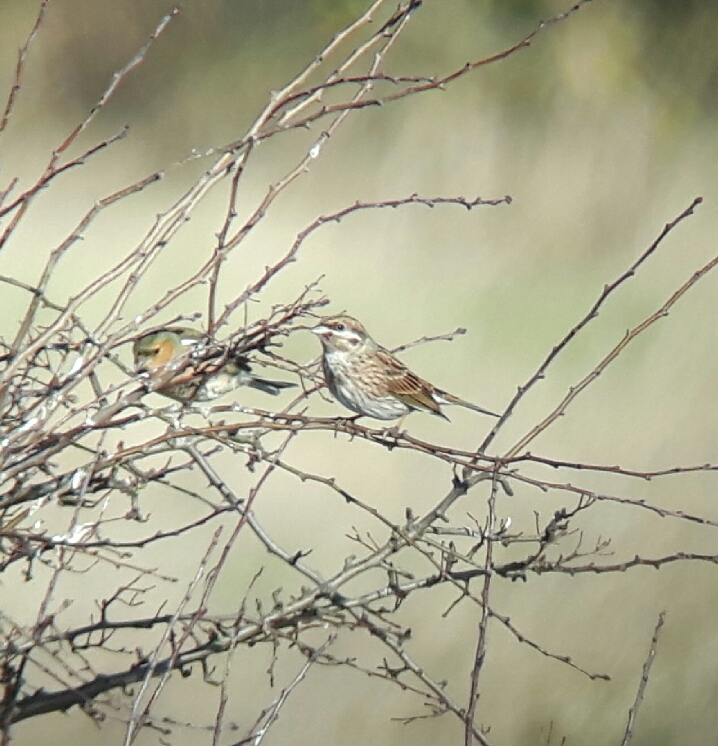 Continuing to deal in twos, Eastern Black Redstarts were still present and correct at Mousehole, Cornwall, and Skinningrove, Cleveland. Both the Dusky Thrush at Beeley, Derbyshire, and Blue Rock Thrush at Stow-on-the-Wold, Glos, also lingered a further seven days. 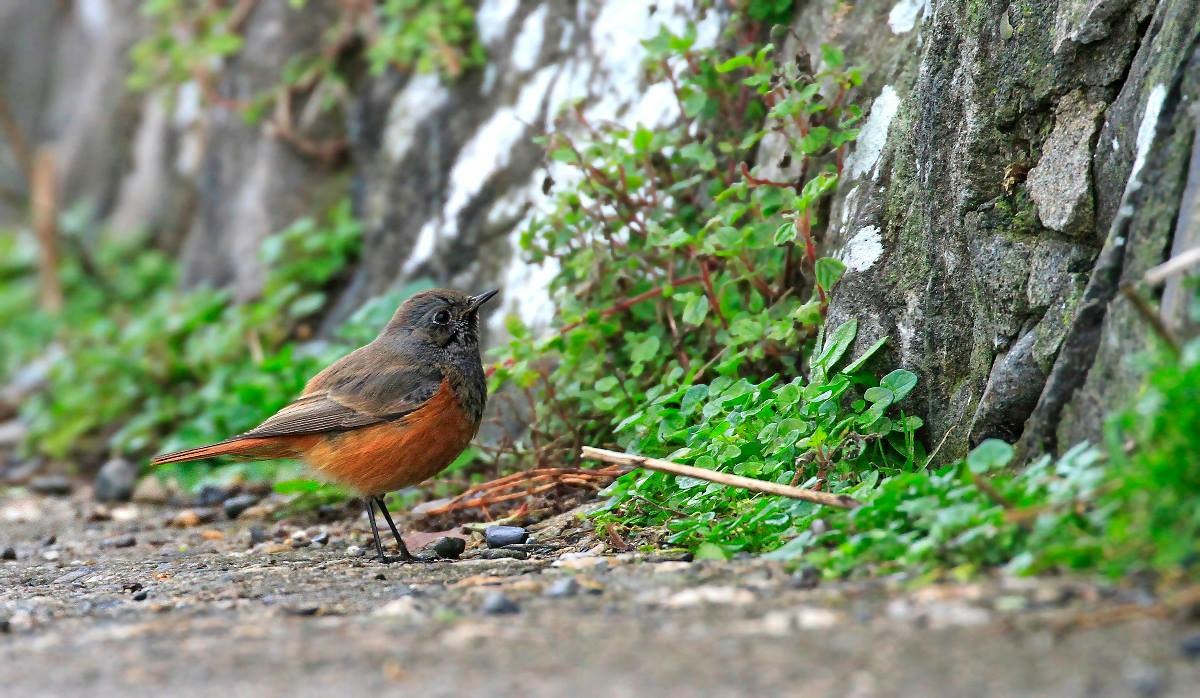 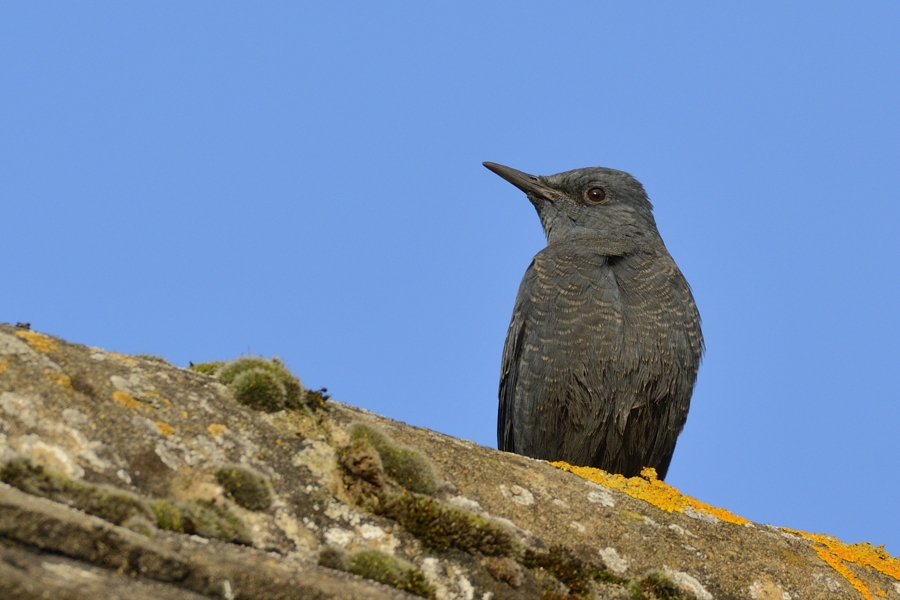 The American Coot added another week to its already lengthy stay on North Uist, while the drake Hooded Merganser did the same at Lochwinnoch, Clyde. Drake Lesser Scaup were still in Cornwall and Orkney, and Ring-necked Ducks were at 14 sites including a new female at Chard Reservoir, Somerset, on 25th. A female Ferruginous Duck visited Staines Reservoirs, Surrey, on 26th, with drakes still in Norfolk and Hampshire as well as the male of questionable origin in Durham. 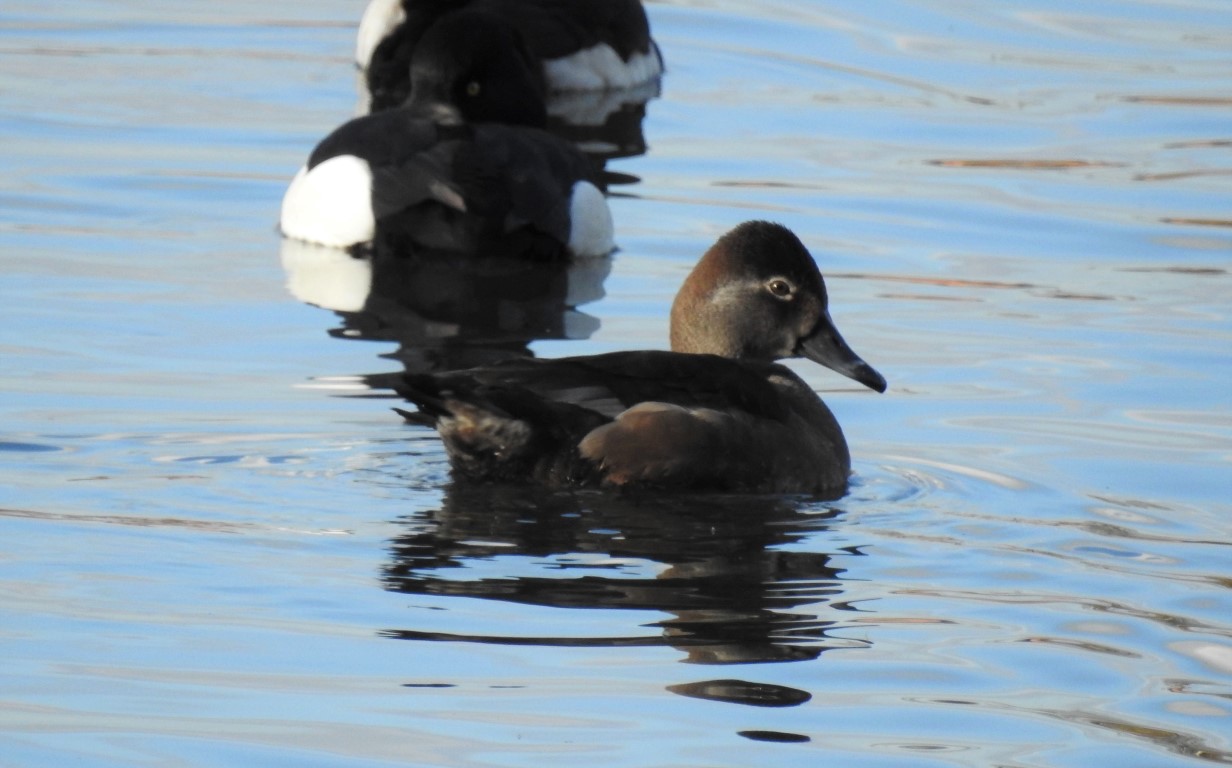 In a similar vein to recent weeks, seven of the nine American Wigeon this week were found north of the border, the exceptions being drakes in Cornwall and Devon. Fourteen drake Green-winged Teal included new birds in Angus and Somerset. The Black Scoter was still off Goswick, Northumberland, on 29th. Surf Scoter were reported from seven sites and included two off Reenroe, Co Kerry, as well as birds in Co Dublin (2), Devon, Conwy, Lothian and Fife. White-billed Diver records came from Mallaig, Highland, on 27th and Sound Gruney, Shetland, on 30th.

In Lancashire the Red-breasted Goose was seen regularly at Pilling and latterly Nateby, while the recent blue-morph Snow Goose also resurfaced at the latter site after a lengthy absence on 28th. Seven Black Brants were seen between Essex and East Yorkshire with an eighth in Co Kerry at Castlegregory on 29th. The Todd's Canada Goose remained in Co Wexford.

Last week's Pallid Harrier in Orkney was again seen at Mill Dam of Rango on 29th while, not too far away as the harrier flies, the male Northern Harrier remained on North Ronaldsay. Elsewhere the young Pallid continued at Welwick Saltmarsh, and looks to have shown a little better this time out. The Gyr hotspot of Balranald, North Uist, produced yet another white morph on 29th. A Snowy Owl was at Kinlooey Lough, Co Donegal, on 29th, and females were still at Spiddal, Co Galway, on 31st and on Eday, Orkney, on 23rd. 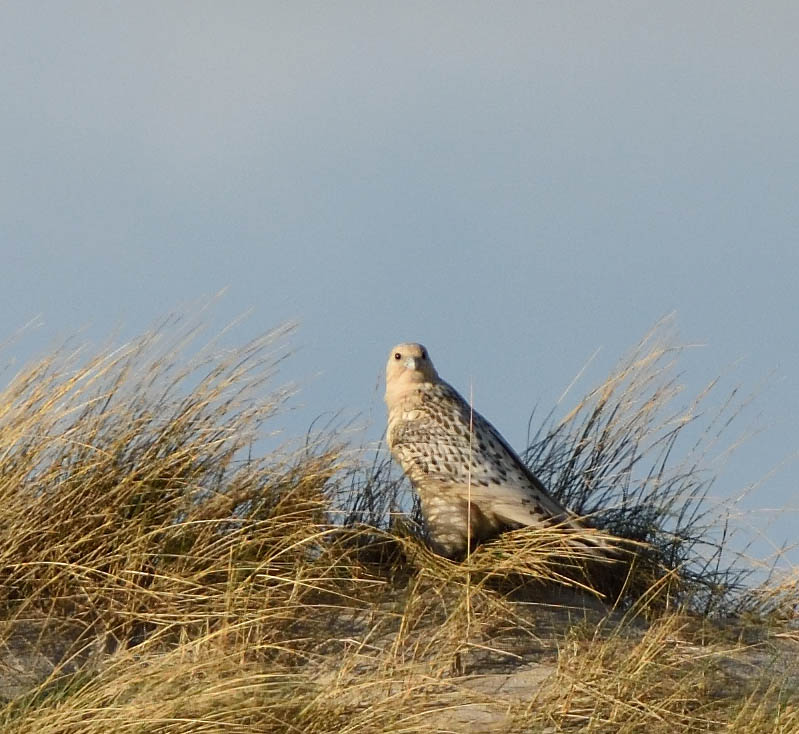 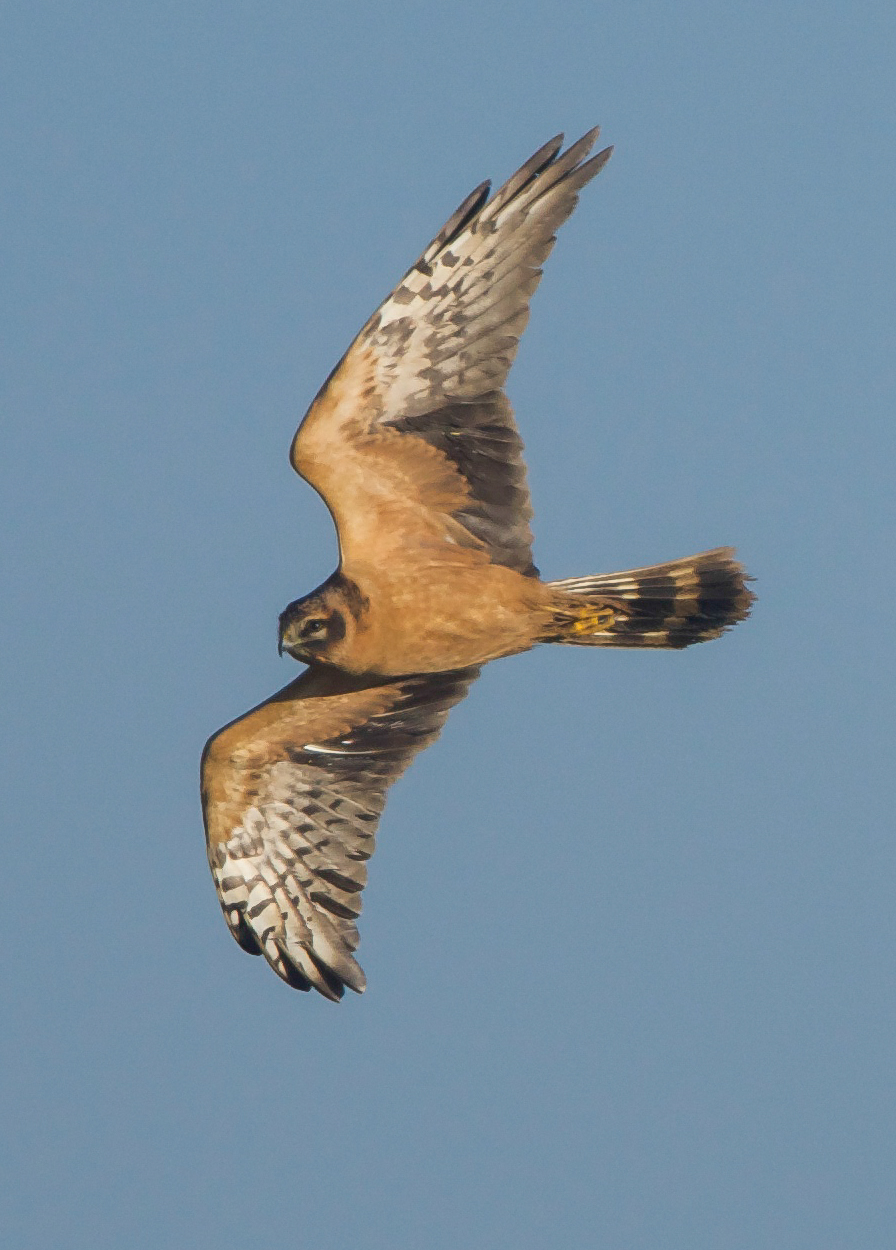 Cattle Egrets were reported at in excess of 30 sites, with a peak count of 12 near Helston, Cornwall. New birds continue to be found, as the single bird near Collooney, Co Sligo, on 29th illustrated. The only Glossy Ibis was the bird at Loch of Strathbeg, Aberdeenshire, on 30th — presumably the same bird as that last noted here on 19 December. 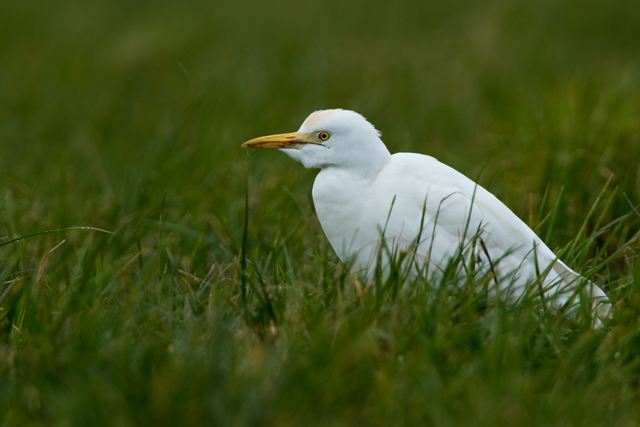 After disappearing in cold weather last week, Shetland's Killdeer seems to have settled down again and was still showing in the Sandwick area to at least 30th. Other shorebird records included the remaining Long-billed Dowitcher at Tacumshin, Co Wexford, and the Lesser Yellowlegs at Lytchett Bay, Dorset. The wintering Temminck's Stint was also still at Branston Gravel Pits, Staffs, on 27th (but not on 29th).

Once again it was just the Devon Bonaparte's Gull flying the flag for its species. Three Ring-billed Gulls at Tralee, Co Kerry, was the week's peak count, closely followed by two in Limerick City (where the Caspian Gull, a very rare bird in Western Ireland, also remained). The majority of the week's 16 'Ringers' were in Ireland, with just three in Britain — in Hampshire, Pembrokeshire and Cornwall. Kumlien's Gulls were a little more numerous this week — birds were reported from seven sites. Glaucous and Iceland Gull numbers remained on a par with the previous week; notable counts of the former included up five at Northumberland's North Shields fish quay. 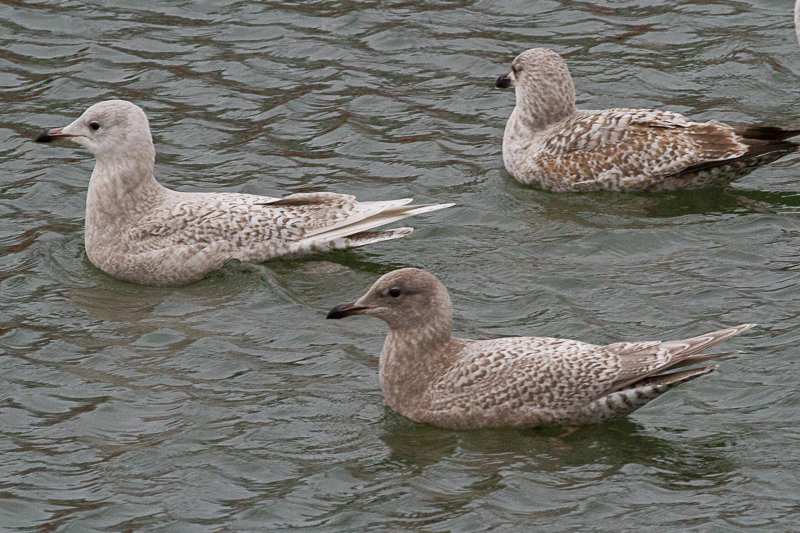 With over 450 reports during the week, Waxwings remain prominent nationwide. There is a feeling, however, that the southward push has somewhat stalled for now. Nevertheless flocks of these entertaining birds continue to entertain birders and photographers across Britain and, less so, Ireland.

Two Richard's Pipits remained at Abbotsbury, Dorset, and a third was still near Arlingham, Glos. The Desert Wheatear was still at Thurlestone, Devon, on 31st and Rose-coloured Starlings lingered in West Sussex and Dorset. Yellow-browed Warblers were in Dorset, Somerset, Devon (2), Cornwall and Co Waterford, while Great Grey Shrikes were noted at 19 sites. 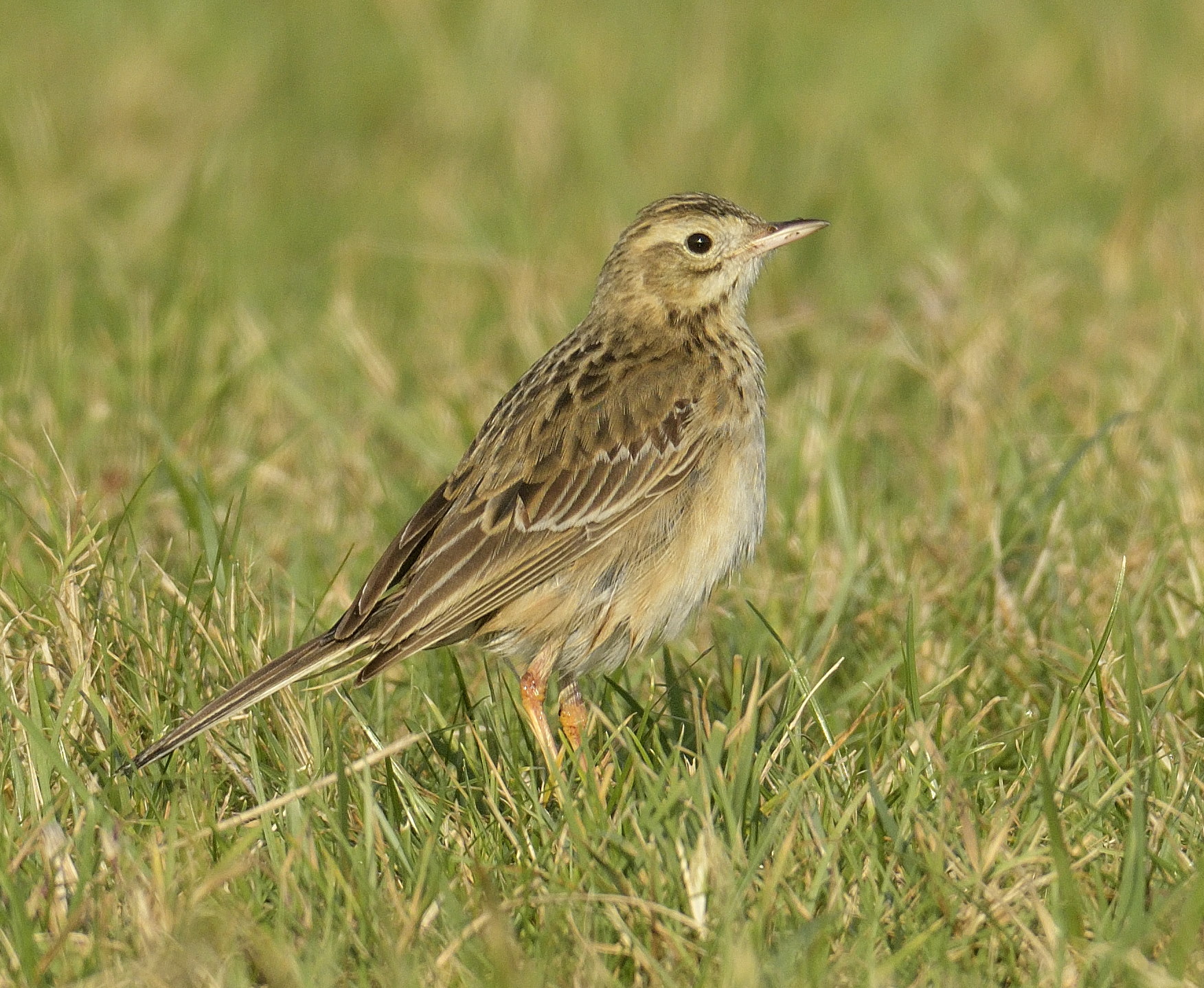 The wintering European Serin was still at Tide Mills, E Sussex, all week. Two new Little Buntings were found this week: one was at Ports Down Hill, Hants, from 25th and the other was in Devon, at Trinity Hill (near Lyme Regis) from 28th. Last week's bird at Over Norton, Oxon, was last noted on 28th. 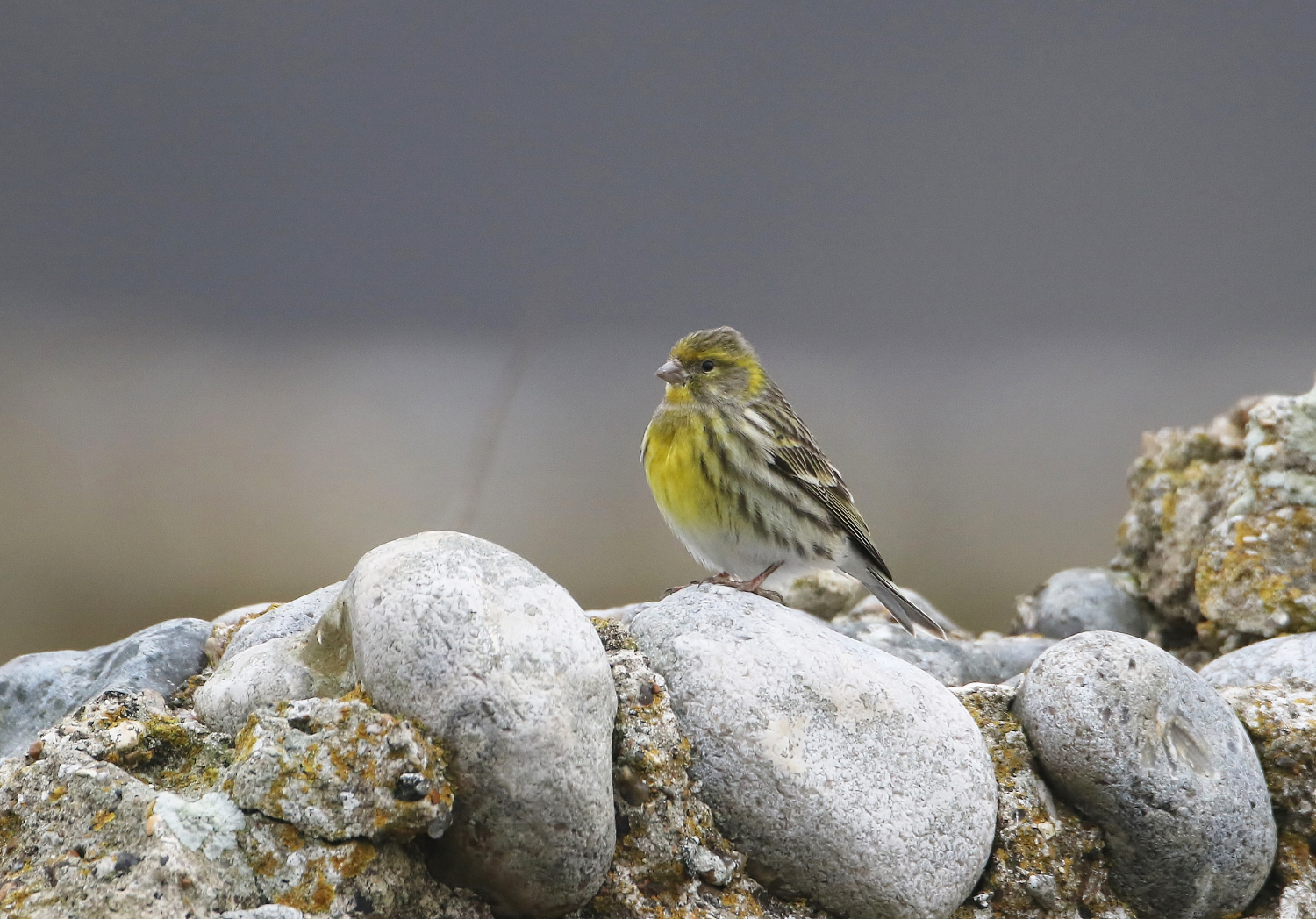 As with in Britain, the region's standout find this week was a Red-flanked Bluetail — albeit, unlike the bird in South Wales, a glorious male. Favouring an urban park in Cingoli, Italy, it's been showing well since 30th. Also in Italy, at least three Pine Buntings were found at two sites in Lombardy and the Tuscan Spanish Imperial Eagle was seen at Diaccia Botrona, Grosseto, on 29th. 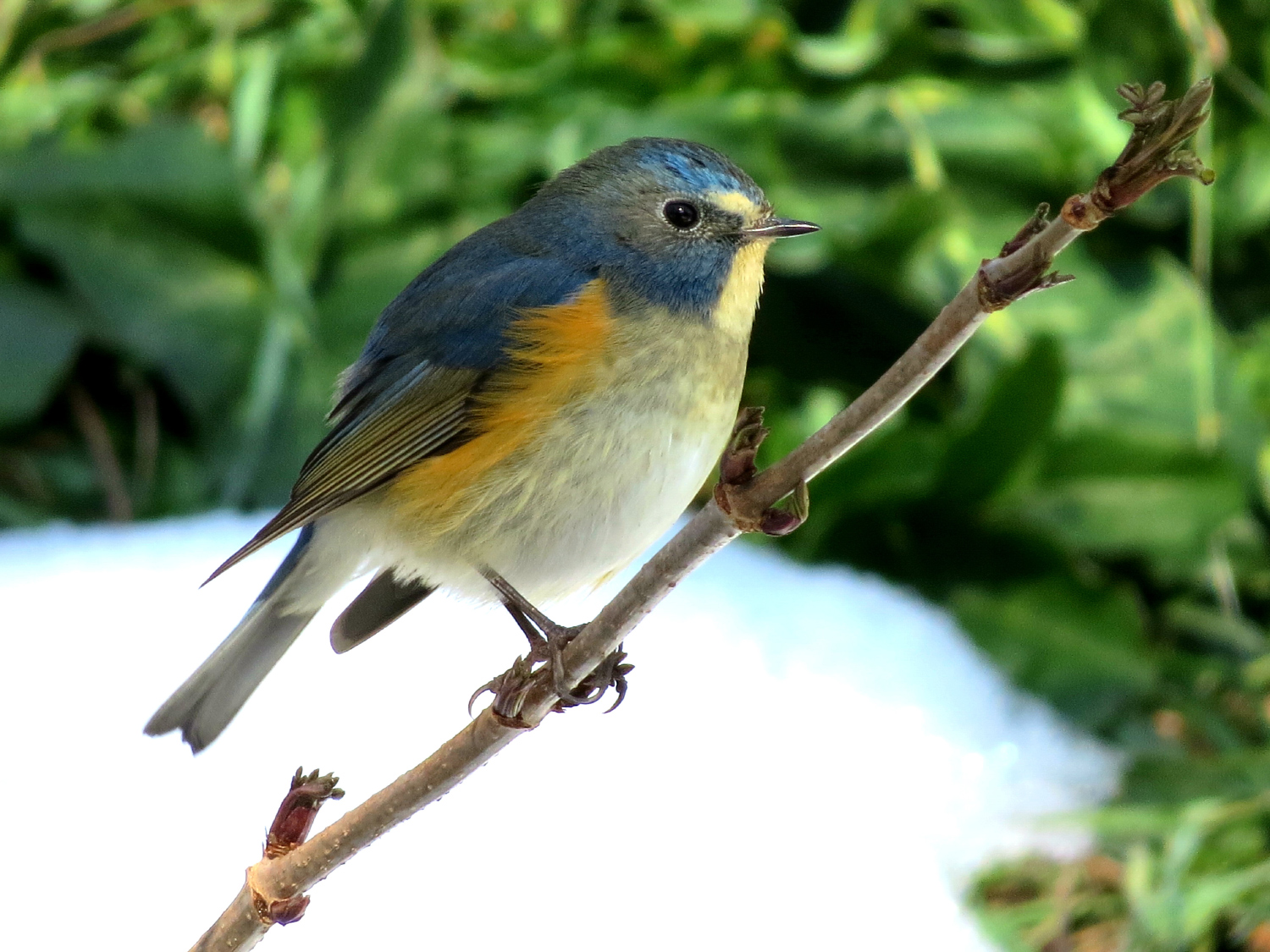 The Sora continued to show well at Silves, Algarve, Portugal, early in the week, while late news concerned neighbouring Spain's second Steppe Grey Shrike, found at Coria del Río, near Seville, on 16th. Also in Spain a Hudsonian Whimbrel was in Cantabria on 29th. 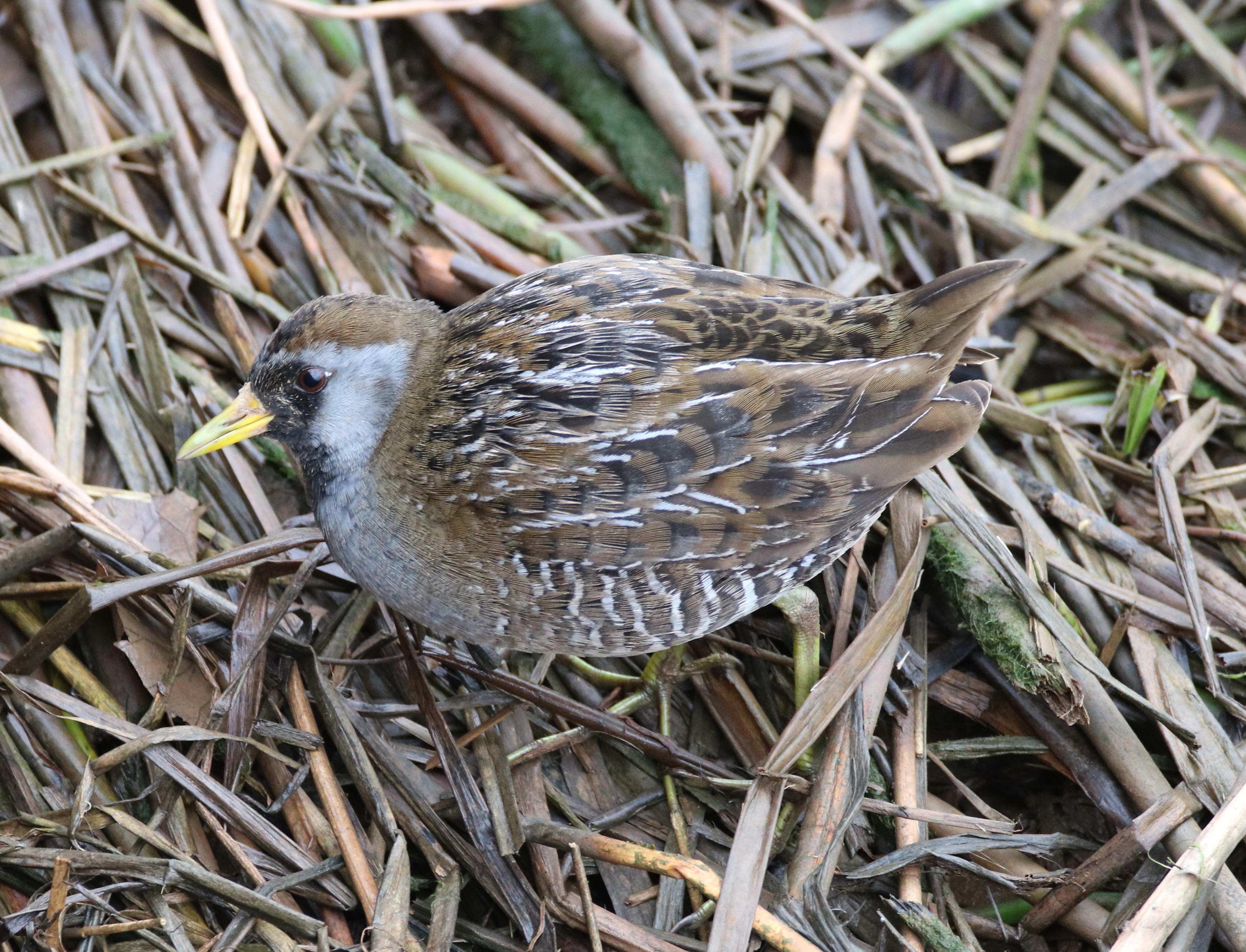 Other news concerned a Common Yellowthroat at Lagoa Azul, São Miguel, Azores, on 28th — apparently a different bird to that seen in December. Siberian Accentors continued at Hirtshals, Denmark, and in Pest, Hungary, while Pine Buntings remained at sites in the Netherlands and Belgium.