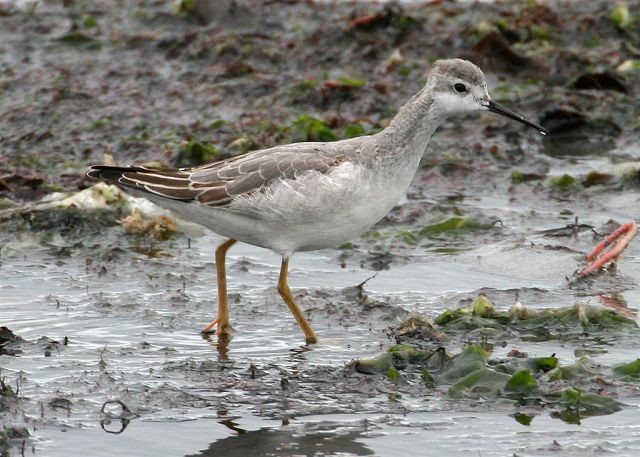 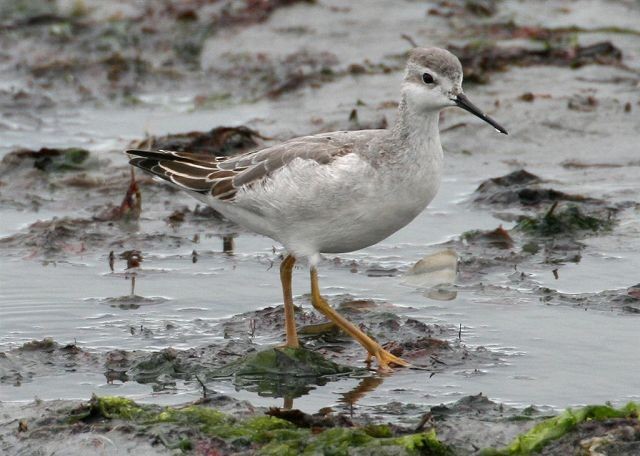 Two species of wader took the honours this week, one from Siberia and the other from North America! An adult Red-necked Stint at Carne (Co. Wexford) on the 29th will, if accepted, be the third Irish record of this attractive Siberian wader, following records in Co. Cork in 1998 and 2002. The last British record involved an adult bird in Cambridgeshire in 2001. Given that all but one of the British and Irish records have involved adults, we must be overlooking a few juveniles? A Solitary Sandpiper was a nice find on St. Kilda (Outer Hebrides) between 27th and 28th and a Hudsonian Whimbrel was at Fair Isle (Shetland) on 29th. A Wilson's Phalarope at Willen Lake (Bucks) from 24th to 26th was most likely the bird seen earlier in the month in Durham and Yorkshire, and a juvenile was in Co. Wexford at both Lady's Island Lake and Nethertown on 28th and 29th. On the 23rd Red-necked Phalaropes were found at both Keyhaven (Hants) and Cantley (Norfolk), the latter remaining to the 28th. The Killdeer was again at Pool of Virkie (Shetland), as was the Long-billed Dowitcher at Shannon (Co. Clare), with an American Golden Plover at Cromane (Co. Kerry) from 24th to 26th. There were White-rumped Sandpipers on Brownsea Island (Dorset), Ythan Estuary (Aberdeenshire) and Canvey Island (Essex), plus a Buff-breasted Sandpiper on the Hayle Estuary (Cornwall) from 24th to 26th. A Temminck's Stint was at Rye Harbour (E. Sussex) on 24th, a Kentish Plover at Marazion (Cornwall) on 26th and Dotterel at St. David's (Pembrokeshire) on 27th. 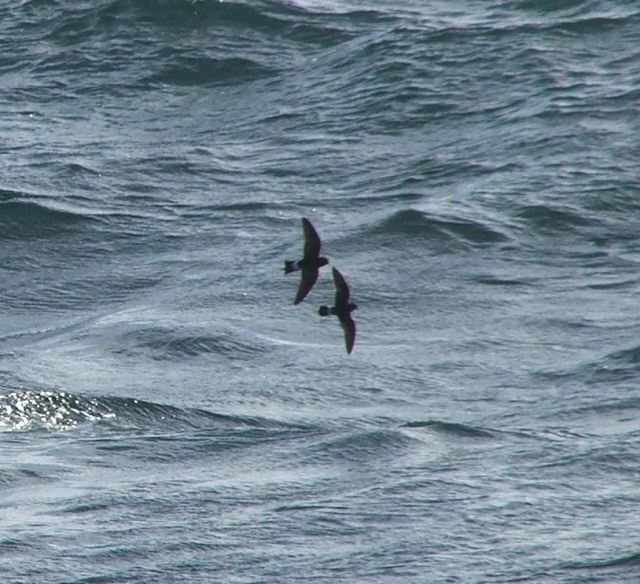 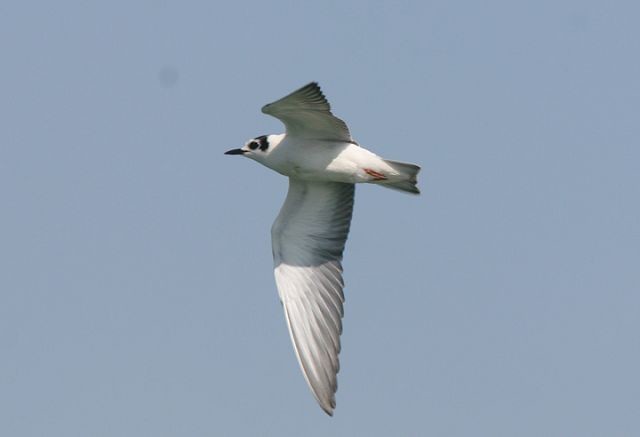 With juvenile Pallid Harriers gracing Shetland in each autumn between 2001 and 2005 another at Loch of Spiggie on 23rd and 28th will not have come as much of a surprise: the islands are clearly gaining a reputation for hosting this graceful raptor. The late-summer presence of presumed Fea's Petrels off west Ireland was backed up with further records this week of birds off the Bridges of Ross (Co. Clare) on 25th and 26th - this watchpoint is THE location to see this enigmatic seabird in British and Irish waters. Another Fea's Petrel was seen passing Labost, Lewis (Outer Hebrides) on 24th. A possible Little Shearwater passed Flamborough Head (E. Yorks) on 29th and decent numbers of Sooty Shearwaters were observed along the east coast, with a handful of Great Shearwaters associated with them in Northumberland and Durham on 27th and 28th. Elsewhere Lewis provided the peak counts of this sought-after seabird, with 41 passing on 25th and 20 on 26th, though Cory's Shearwater reports related to just the occasional singleton. Wilson's Storm-petrels were seen off Scilly pelagic trips on 24th and 26th and another off a Co. Kerry pelagic on 27th, whilst the cumulative number of Sabine's Gulls crept into double figures. A Franklin's Gull was at Braunton (Devon) on 29th, the Bonaparte's Gull was still on South Uist (Outer Hebrides) and Ring-billed Gull was again in Oban (Argyll). A Forster's Tern was reported from Blakeney Point (Norfolk) on 24th and a Gull-billed Tern was also logged from the north Norfolk coast between 25th and 27th, being reported from Snettisham, Blakeney and Cley. Five White-winged Black Terns included birds from Minsmere (Suffolk), Dungeness (Kent) and Abberton Reservoir (Essex), plus brief sightings at Funton Creek (Kent) and Christchurch Harbour (Dorset). 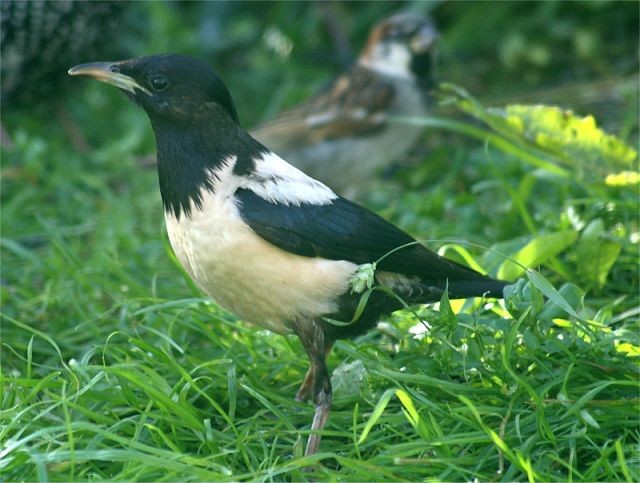 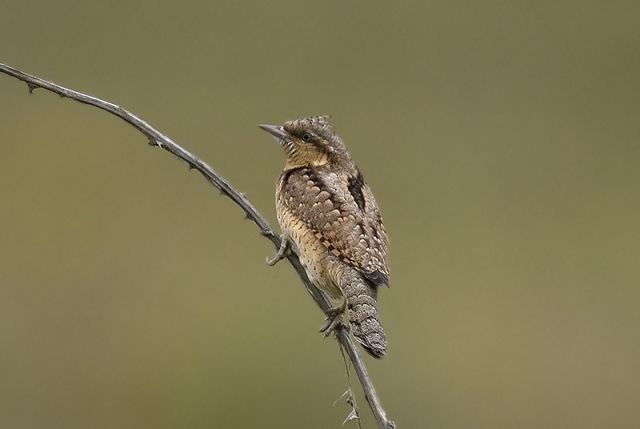 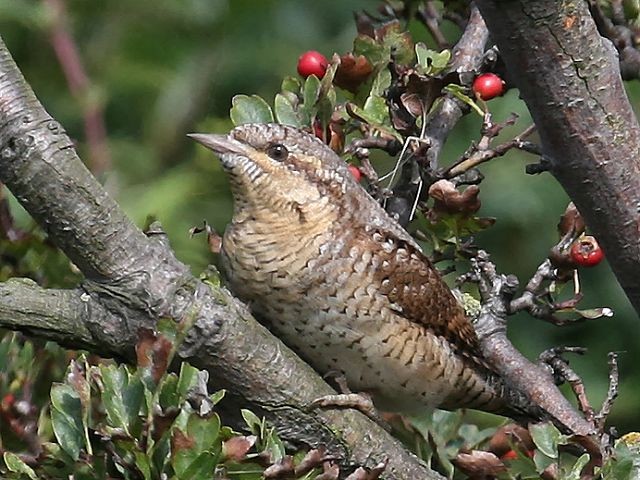 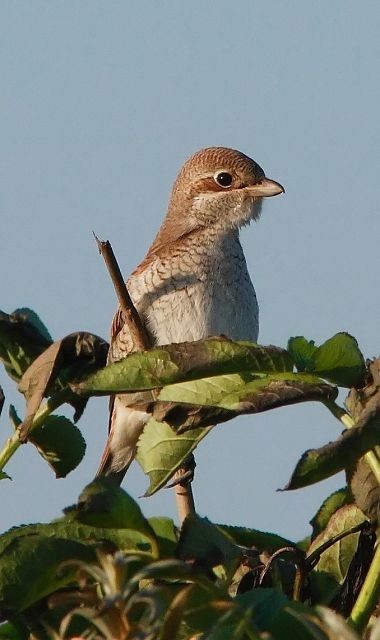 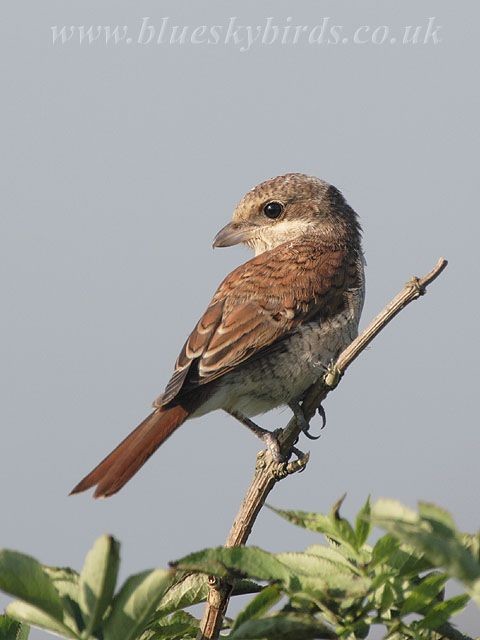 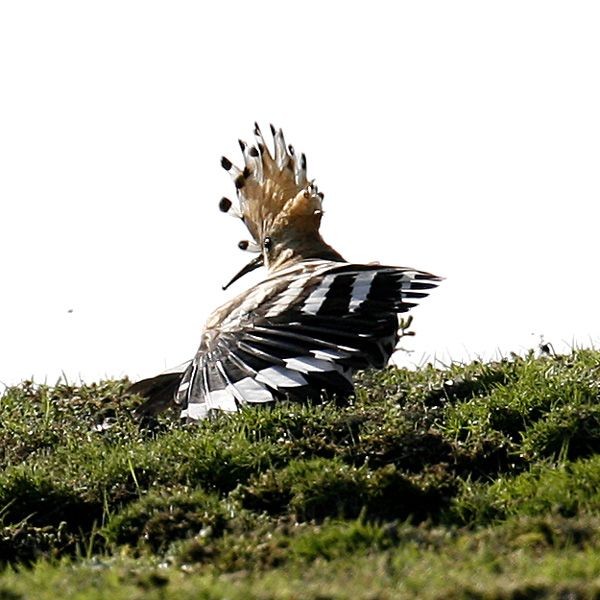 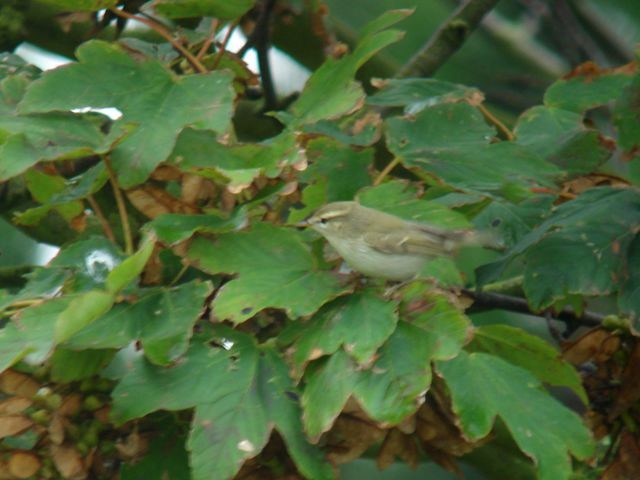 The talking point for many was the localised deluge of Greenish Warblers in Norfolk, where the initial fall on Blakeney Point (Norfolk) last week no doubt inspired many others to go out and find their own, with the result that as many as 26 were logged in the county, including one inland at Rockland Broad. Just three others were detected away from the focus of the landfall, with singles in East Yorkshire, Suffolk and Kent. On Fair Isle (Shetland), two, or perhaps three, Citrine Wagtails were present. Around 45 Wrynecks were found, most in East Anglia and the southeast, as were just under 20 each of Barred Warblers and Red-backed Shrikes. The eight Common Rosefinches had a more expected bias to Shetland and back-up came in the shape of a Marsh Warbler on Fair Isles, two each of Icterine Warbler and Melodious Warbler and five Ortolan Buntings. A Woodchat Shrike was at Church Norton (W. Sussex) on 26th and 27th, Hoopoe at Dover (Kent) on 24th and 25th and Rose-coloured Starlings still at Ennis (Co. Clare) and Unst (Shetland). 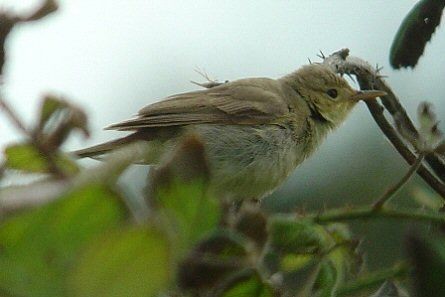 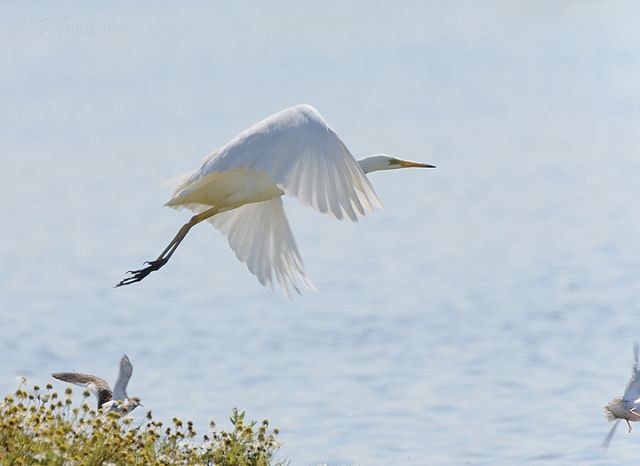 The Snowy Owl remained on St. Kilda as did the Black Kite at Nocton Heath (Lincs), plus another Black Kite passed over Aqualate Mere (Staffs) on 26th. The Black Stork continued on the Alaw Estuary (Anglesey) and 'possibles' were reported over Ulrome (E. Yorks) on 25th and three at Porthleven (Cornwall) on 27th. A ringed Sacred Ibis in north Norfolk continued to provoke debate as to its origins and no doubt prompted many to divert from watching Greenish Warblers for 'insurance purposes', whilst the Glossy Ibis remained at Marshside (Lancs). A Cattle Egret was at Colyford Common (Devon) on 27th and obliging Great White Egrets were at Leighton Moss (Lancs) and Cotswold WP (Wilts) plus another briefly at Lodmoor (Dorset). A Squacco Heron was at Swineham Point (Dorset) on 27th and Spotted Crakes were at Wheldrake Ings (N. Yorks), Marazion (Cornwall) and Coombe Hill Meadows (Glos). 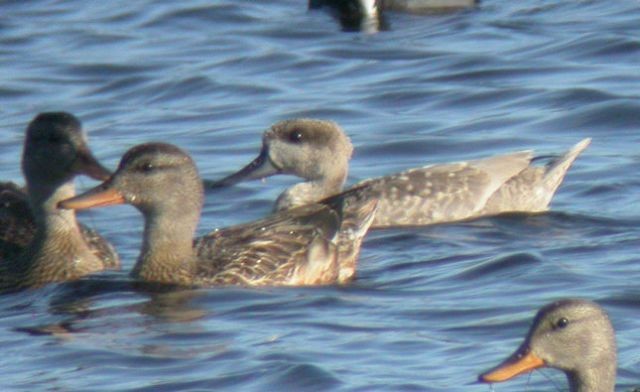 A drake King Eider was off Wester Quarff (Shetland), Ferruginous Ducks were still in E. Yorkshire and Somerset and a Marbled Duck was present at several sites in Suffolk. A Ring-necked Duck was again at Blithfield Reservoir (Staffs), as was the American Wigeon on the Ythan Estuary (Aberdeenshire) and a Surf Scoter was off Carnoustie (Angus and Dundee). 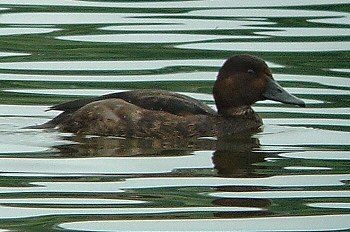 At first glance, Nigel's aerial image of a Hobby is a nicely exposed flight shot, with good pose and an interesting composition (wings and body parallel to the edges of the frame, with the off-centre subject 'flying into' the frame). Closer inspection, however, reveals the bird's prey: a Swift characteristically caught on the wing. We've had many Hobby photos uploaded over the last few years but never one with a captured bird, so this one is quite special. 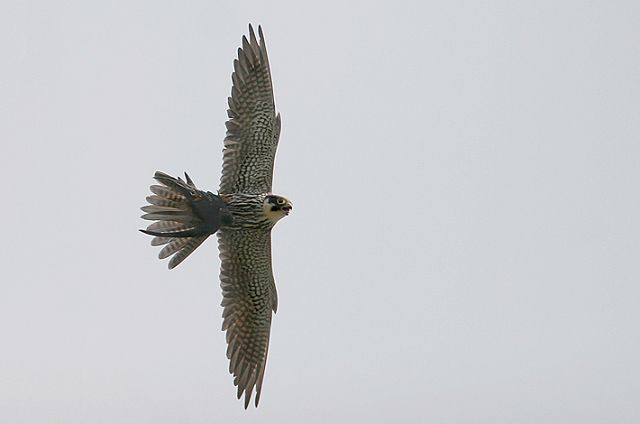 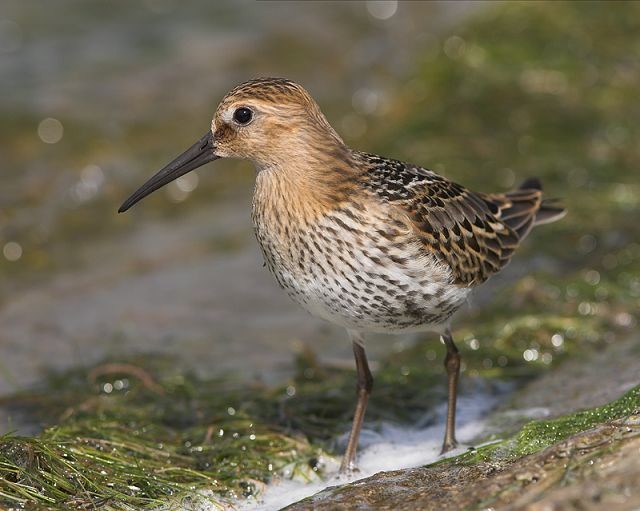 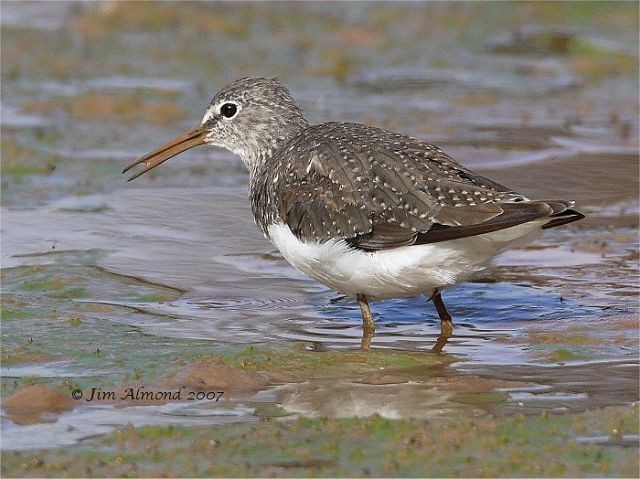 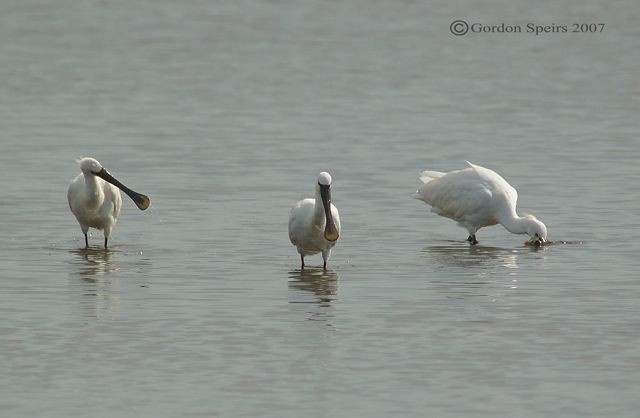 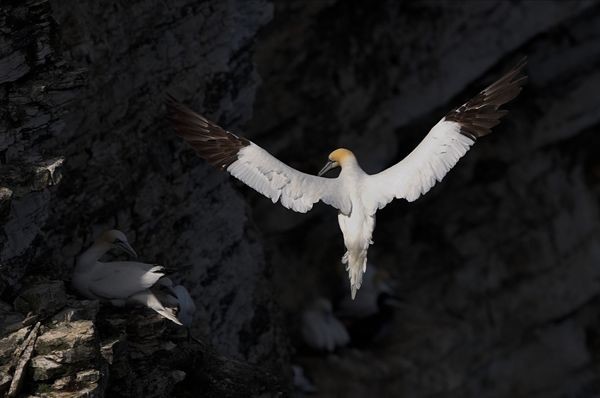