There is only one place to start this week's review ... Kent scored what will almost certainly prove to be one of the most popular rarities of the year with Britain's first twitchable Eleonora's Falcon. While there are currently 10 accepted records to date, most have proved incredibly brief. Step forward Sandwich Bay, where a pale-morph first-summer was photographed early on 26th. Briskly relocating nearly 15 kilometres inland to Stodmarsh that afternoon, it was back at Worth Marsh the next morning, where it would remain until the week's end. The avifauna of this well-kempt corner of Kent took on an altogether more Mediterranean feel this week, with up to two Red-footed Falcons and a Golden Oriole keeping the Eleonora's company and nearby Pegwell Bay enjoying a Caspian Tern and male Kentish Plover. A short distance away, a male Sardinian Warbler sang at South Foreland from 28th, rounding off an incredible run of birds. A Kent birder on social media summarised it best: "Our first twichable Caspian Tern this century followed by a new for Kent Eleonora's Falcon and now our first Sardinian Warbler for 21 years. What's next?"

Incredibly, last year's Scottish Short-toed Snake Eagle looks to have returned for a second summer, noted over Meall Dola, Highland, on 24th before appearances at Strath Brora on 27-28th. Found just a short distance away from last year's sighting, this first for Scotland gave itself up to a small number of gleeful Highland listers towards the week's end. While it will undoubtedly prove difficult to keep track of, might it be here for a prolonged stay? When a White-tailed Lapwing first appeared at Hickling Broad, Norfolk, on 23rd, you could have been forgiven for thinking it was the long-staying individual relocating. However, a number of plumage details and a seemingly larger bill lead a number of birders to suggest the distinct possibility of a new bird. A number of these can be explained away through an advancing moult, however, and even odds must be on it being the same example. Departing after 24th, it later spent three days at Rimac, Lincolnshire, from 26th before relocating to Bickershaw, Greater Manchester, on 29th – becoming a completely unexpected county first in the process.

Somewhat overshadowed as the week wore on was a European Roller at Praze-an-Beeble, Cornwall, from 23rd. Always popular visitors to Britain, it is the county's first record since 1994. It was a respectable week for the similarly spectacular European Bee-eater. High counts saw eight continuing at St Margaret's at Cliffe, Kent, four over Trentishoe, Devon, and trios over West Sussex and Scilly. On the west coast, one flew north over Lunt Meadows, Lancashire, while one reached as far north as Helendale, Mainland Shetland. A male Black-headed Bunting on Bryher, Scilly, from 23-27th cut a popular figure and looked resplendent among the island's plentiful flower meadows. One reported on St Mary's on 23rd was perhaps the same individual. In Argyll, a male on garden birdfeeders at Tiroran, Mull on 24th was a first for the island. 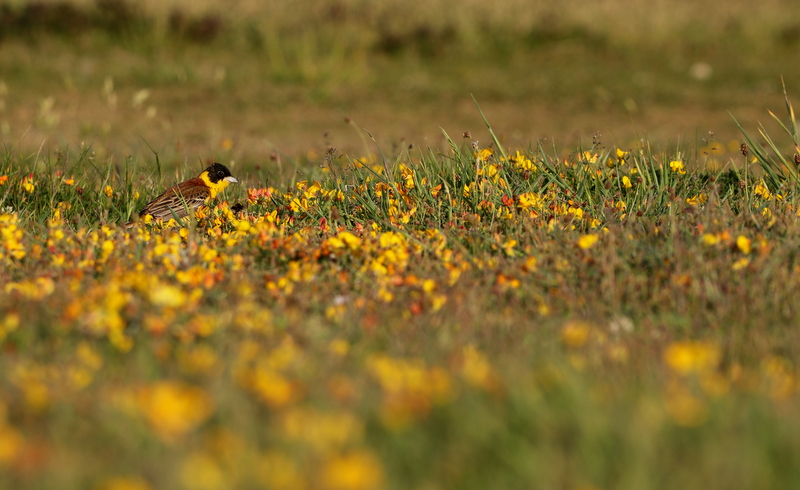 In Norfolk, a Lesser Grey Shrike impressed on the Norwich outskirts near Horsham St Faith on 27-28th. Other Lanius delights included five Woodchat Shrikes (including new examples in East Yorkshire, Dorset and Lancashire) and a Scillonian Red-backed Shrike. The Skokholm, Pembrokeshire, Moltoni's Warbler remained throughout, to the pleasure of a number of twitchers who managed to make it across to the island on Sunday, when it was joined by an Icterine Warbler. In Shetland, Out Skerries hosted a likely first-summer female Eastern Subalpine Warbler, with an unassigned female on Foula. Continuing Blyth's Reed Warbler and European Serin were the best action on Fair Isle, Shetland, this week, with a supporting cast of Golden Oriole, Common Rosefinch, White-tailed Eagle and two Grey-headed Wagtails. Another Grey-headed Wagtail was at Haroldswick, Unst.

An elusive Great Reed Warbler at Hook-with-Warsash LNR, Hampshire, on 24th provided just a single flight view only, although its croaky tones were audible throughout the day. One remained at Snettisham Coastal Park, Norfolk. Iberian Chiffchaffs remained at Regent's Park, London, and Otterbourne, Hampshire May's bumper Golden Oriole showing continued, with no fewer than 37 reports appearing on the BirdGuides news pages. These included a rare two for Durham (at Waldridge Fell and Lanchester) and a single Irish record at Toormore, Co Cork. Hoopoes were logged from Cornwall, Buckinghamshire, Essex and Northumberland; a Wryneck was reported near Callander, Forth.

An Alpine Swift dazzled over Old Harry, Dorset, on 26-27th and even saw Sir David Attenborough make an appearance! Another was over Gosforth Park, Northumberland. A Little Swift was reported over suburban London at Lee by two observers on 26-27th, while Red-rumped Swallows were in East Yorkshire, Northumberland and the Outer Hebrides. White's Marsh, Co Cork, flaunted an impressive double-act of a Squacco and Purple Heron from 27th, the county's first Squacco since 2015. Early on 29th, a Little Bittern was a brief visitor to a small reedbed near Grimsby, Lincolnshire. Seven English sites held Purple Herons, including fresh examples at Tresco, Scilly, Anderby Creek, Lincolnshire, and both Walberswick NNR and Felixstowe Ferry, Suffolk. A Black Stork reportedly flew west over Newhaven, East Sussex, on 29th; a Spotted Crake overflew Norwich, Norfolk, in the early hours of 23rd. Proving settled for another week was the Black-browed Albatross at Bempton Cliffs RSPB, East Yorkshire. A Long-tailed Skua tracked along the coast between Durham and Northumberland on 29th, the same day one was off Kinghorn, Fife. A number were reported from the Outer Hebrides. 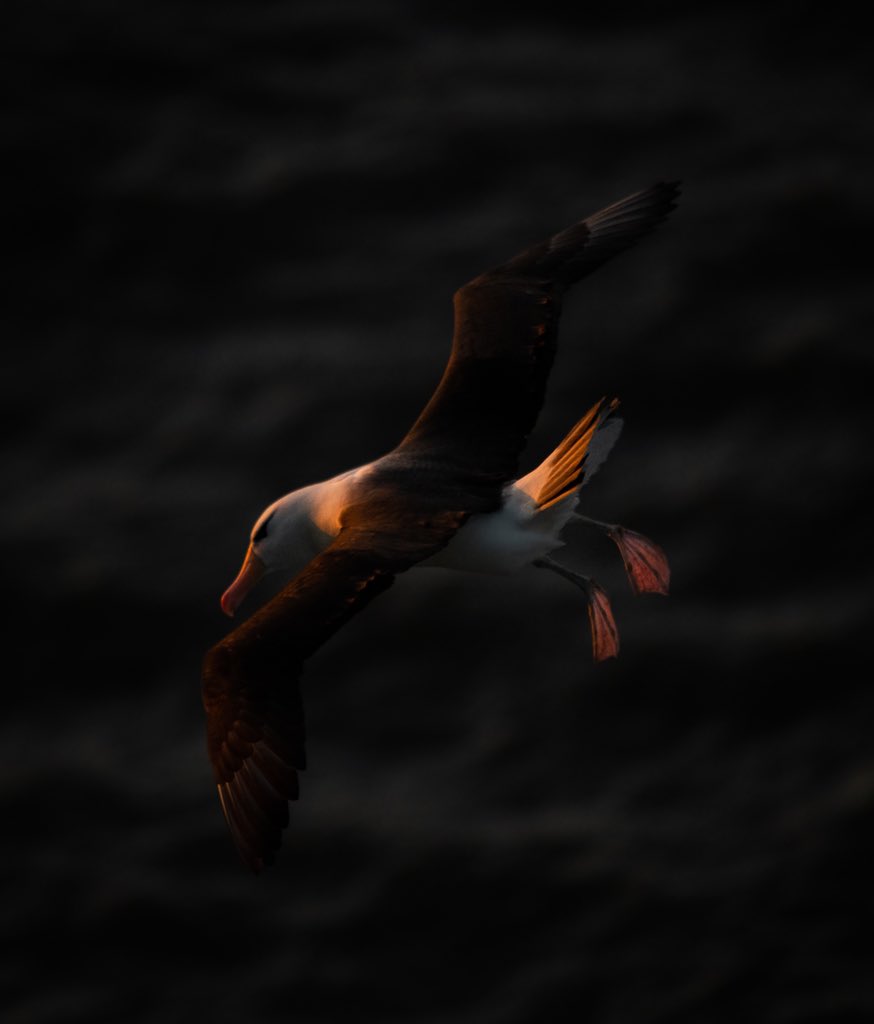 Radipole Lake RSPB, Dorset, boasted a showy Gull-billed Tern on 29th, with the American Black Tern still at Long Nanny, Northumberland. In Norfolk, a Caspian Tern was again at Hickling Broad. A brief first-summer Bonaparte's Gull was at Ouse Washes RSPB, Cambridgeshire, on 26th and a young Ring-billed Gull was at Stinky Bay, Benbecula, Outer Hebrides. A brief Green-winged Teal was at Haroldswick, Unst, Shetland, on 25th, the contentious Blue-winged/Cinnamon Teal hung on at Marlow, Buckinghamshire, and an American Wigeon remained at Lough Beg, Co Londonderry. The Outer Hebrides Surf Scoter continued at Stinky Bay, Benbecula, with King Eider at Musselburgh, Lothian, and Loch Fleet, Highland.

A new drake Lesser Scaup was a surprising find at Marshside RSPB, Lancashire, on 29th, while four Ring-necked Duck included a new bird at Holme Pierrepont, Nottinghamshire. The female Ferruginous Duck at Belvide Reservoir, Staffordshire, is thought to be a different individual to the one present earlier in the year. Another 'Fudge' was at Blashford Lakes, Hampshire, on 23rd. Very much a Western Palearctic mega in every sense of the word, Black-capped Petrel retained its recent annual status in the region with one logged off a Madeiran Wind Birds pelagic on 27th.

Norway boasted its first Cretzschmar's Bunting on 28th, with a male near the southern tip of the country at Flekkerøy. Elsewhere saw a somewhat Nearctic theme, with the Sandhill Crane at Kvaløysletta and a first-summer Franklin's Gull at Spongdal, while Finland hosted a Baird's Sandpiper at Mäntyluoto on 26th.

An Little Tern at Garðskagi was just the fourth for Iceland. An American Buff-bellied Pipit, meanwhile, took advantage of a sailing between Greenland and Outer Hebrides to cross the Atlantic at least as far as waters south of Iceland. In Denmark, a Black-browed Albatross flew north past Blåvands Huk on 28th and both Bonelli's and Steppe Eagles were at Skagen.

A smart adult Masked Shrike near Salin-de-Giraud was just the third for France, with the Elegant Tern still on Île de Noirmoutier. In Belgium, a wandering Bearded Vulture overflew several sites, while a released immature hung on in The Netherlands. Belgium's fifth King Eider was at Het Zwin. Austria's third Green-winged Teal flirted with the German border at Mining; a young Pygmy Cormorant lingered at Bremen, Germany.

A male Moroccan Wagtail was in Gibraltar, while a Pied Crow was again on Gran Canaria, Canary Islands. Lesser Flamingos were at Coto Doñana and Laguna de Fuente de Piedra, Spain. A Pied-billed Grebe remained in the Azores at Lagoa das Furnas, São Miguel.

In Turkey, six Bar-tailed Larks were at Ceylanpınar.