If conditions are right, late May can generally be relied upon to provide British and Irish birders with at least a scattering of quality birds. In this stop-start spring, however, nothing can be taken for granted, and so it was that the exciting conditions from Friday onwards produced a decent, if slightly disappointing, selection of birds – particularly when you consider that, across the Atlantic, one of the greatest-ever witnessed migrations, involving hundreds of thousands of warblers, took place in Quebec on Monday (see here).

Of course, the effects of intensive agriculture, increased urban areas, degradation of habitat and many other causes are well documented in western Europe, and it should be of no great surprise that we are seeing ever-diminishing returns of even the supposed 'common' migrants on our shores, even during spells of promising weather. Yes, there was the inevitable scattering of late spring scarcities that such conditions almost always produce but, aside from one or two spots (such as Shetland), there was an undoubted 'flat' feeling among coastal patch-workers, who patiently wait all spring for days like these …

All that said, there was nonetheless enough excitement to go around and keep most birders inspired. It appears that 2018 is poised to produce a huge invasion of Rosy Starlings to Britain – and, given the numbers turning up across continental Europe, where records are being broken, quite possibly the biggest ever. Flocks are appearing as close as France, where an astonishing group of 500 was noted in Marseille during the week, and even as far west as Spain, but so far we've 'only' been treated to ones and twos. That said, you don't have to be a fortune-teller to suggest that the 19 reported over the seven-day period are the harbingers of a much larger arrival that will surely follow. Of those, no fewer than five were in Dorset, three were in Cornwall and Kent (including a lingering bird at Dungeness) and two were together on Anglesey, with further reports from Hampshire, Northamptonshire, Norfolk, East Yorkshire and the Isle of Skye. From a similar part of the world came a gorgeous male Black-headed Bunting to Portland Bill, Dorset, which also hosted two of the county's Rosy Starlings. Unfortunately, what could easily have been the week's star bird (it's a long time since a male lingered longer than a day in the south) was found late in the evening on Bank Holiday Monday and had departed by the following morning. 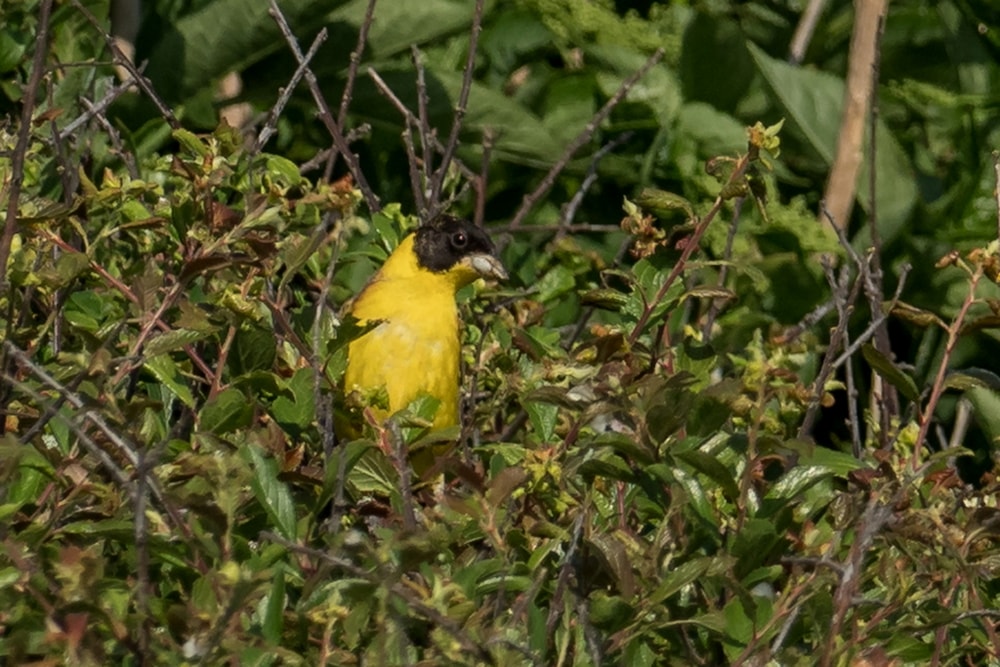 Instead, the star bird was indisputably the male Moltoni's Warbler found at Duncansby Head, Highland, on 28th. Despite apparently favouring cover consisting of little more than a fence line and nearby cliffs, it lingered overnight and was still showing very well on 29th. While there are currently fewer than 10 accepted British records of this recently split species, this latest occurrence continues a good run of occurrences in recent years, as identification awareness improves among birders – and there's a feeling that it could even be more of a near-annual vagrant, rather than one worthy of the BirdGuides red exclamation mark, though only time will tell.] 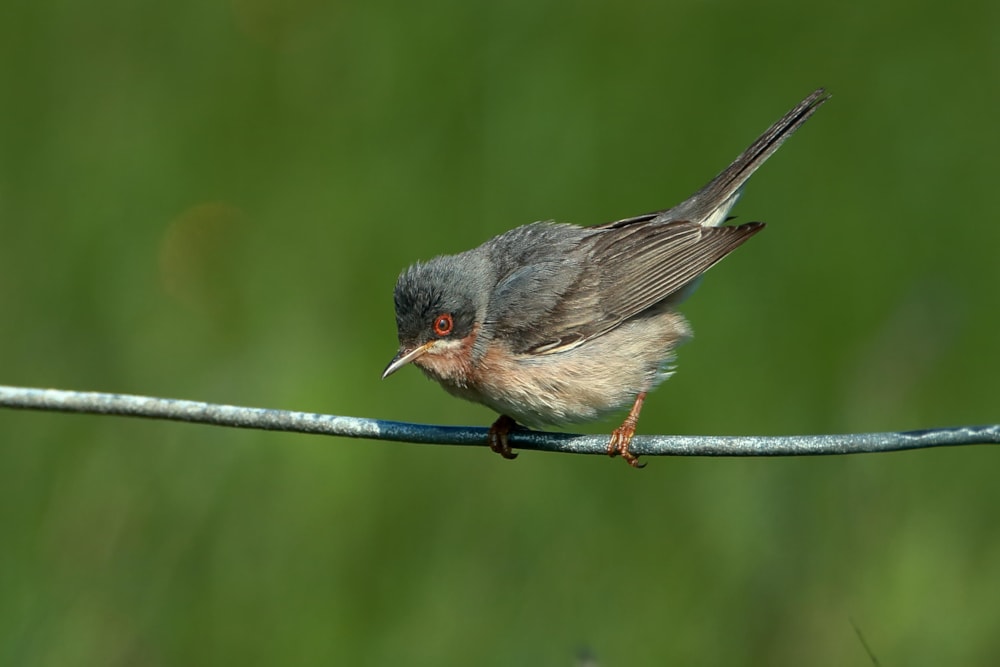 A male Eastern Subalpine Warbler visited Long Nab, Burniston, North Yorks, on 26-27th, with a female on Bardsey Island, Gwynedd, on 29th. A new Iberian Chiffchaff was at Red Rocks, Cheshire, on 23-24th, with another still singing nearby at Thurstaston Common and further birds remaining in Cornwall (two) and North Yorkshire. Four Greenish Warblers were found: a male sang at Titchwell, Norfolk, on 24-25th, one was in Lowestoft, Suffolk, on 26th, one arrived on Out Skerries, Shetland, on 27th, and another graced the Isle of May, Fife, on 27-28th. The first Great Reed Warbler of the year sang on St Mary's, Scilly, on 27th, while another addition to the 2018 year list was Paddyfield Warbler, with a bird at Scatness, Shetland, on 28th. Bardsey Island scored a Blyth's Reed Warbler from 25-27th, with others at Blakeney Point, Norfolk, on 26th, Newton Pool, Northumberland, and Fair Isle on 27th, and Red Rocks, Cheshire, on 28th (the latter recorded singing after dark thanks to a camera trap). A good spread of Marsh Warblers were encountered right along the east coast between Suffolk and Shetland, most of which were in song. Icterine Warblers were, however, much scarcer, with the species barely making it into double figures. Away from the Northern Isles, there were singles in Fife, Northumberland, East Yorkshire and Lincolnshire, with two records from Norfolk. 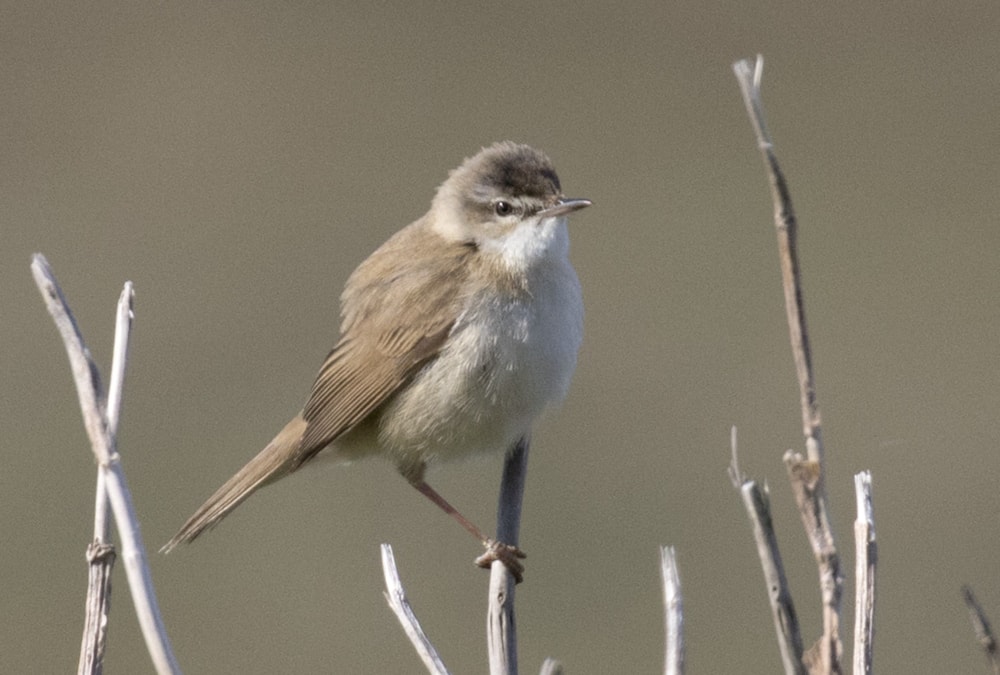 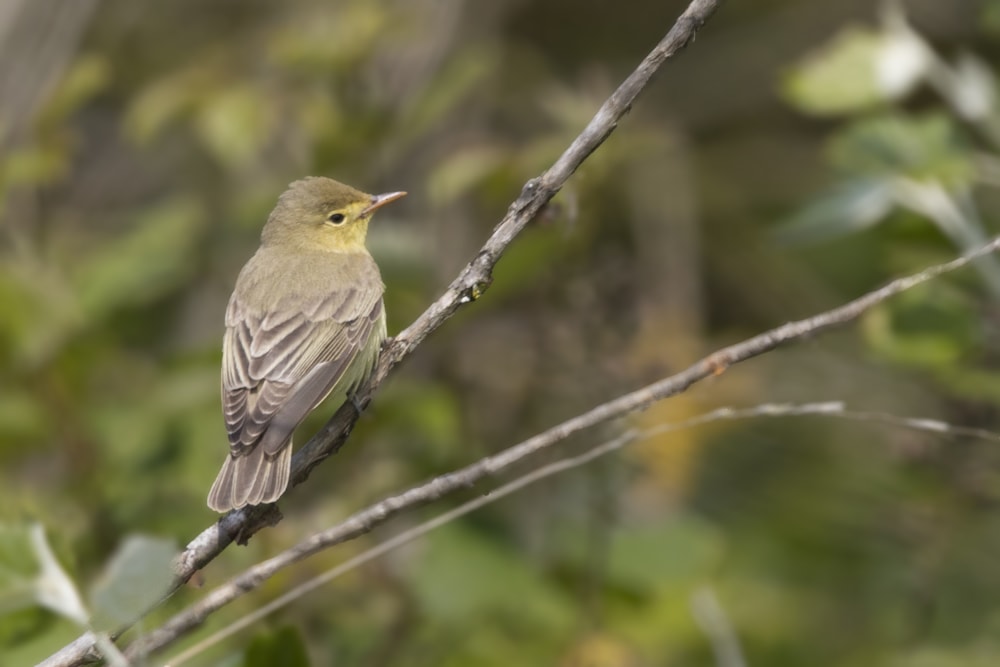 Red-backed Shrikes were quite plentiful, with at least 50 scattered along the east coast and Northern Isles, including a peak count of eight on Fair Isle on 28th. Around 15 Common Rosefinches included west coast records from Lundy, Devon, and Great Orme, Conwy, with a third on Tiree, Argyll. Nine Red-breasted Flycatchers included a smart male trapped at Calf of Man on 23rd and a well-watched female at Holy Island, Northumberland, on 26-27th. A White-spotted Bluethroat was trapped on Bardsey on 25th, with a scattering of Bluethroats also reported in the Northern Isles (and one at Wick, Highland, on 25th). Rustic Buntings are becoming ever rarer, although the Farne Islands, Northumberland, claimed their second of the spring on 26th, this time a stunning male. 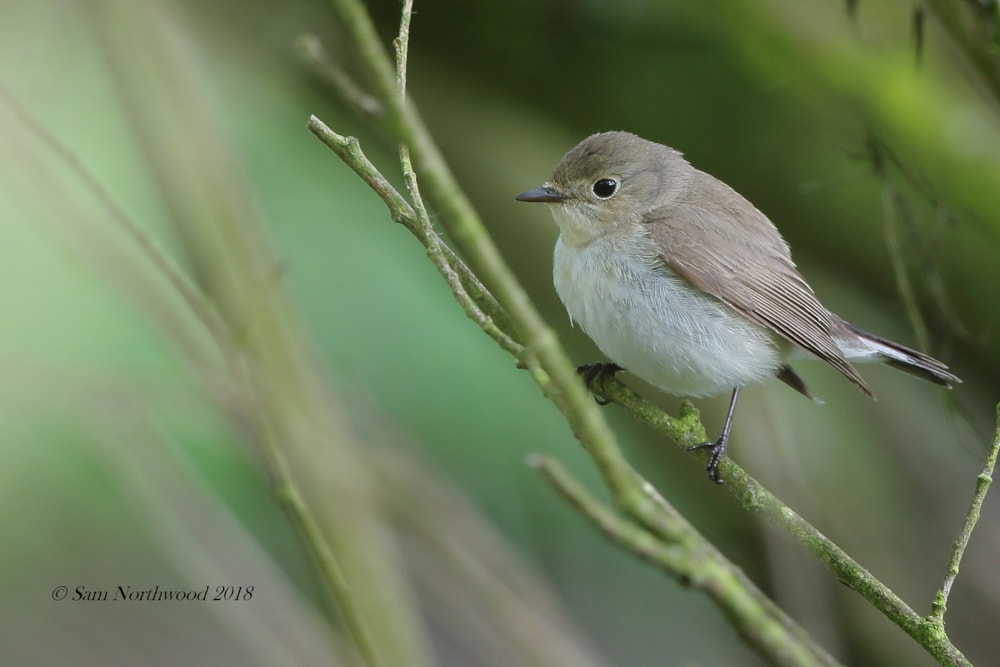 An Ashy-headed Wagtail visited Stanpit Marsh, Dorset, on 27th, while there was a light scattering of Grey-headed Wagtails, generally in eastern areas. A Tawny Pipit graced the Saltee Islands, Co Wexford, on 25-26th, while a Red-throated Pipit visited Papa Westray, Orkney, on 27th. A Greater Short-toed Lark was at Blakeney Point from 25-27th, with another on the Isle of May from 26th. Red-rumped Swallows were seen in Kent, Suffolk and Highland, with a fourth noted from a cruise ship in Orkney waters to the south of Fair Isle on 26th. An Alpine Swift flew over Hengistbury Head, Dorset, on 26th.

As many as 15 Golden Orioles were seen, including three on St Agnes, Scilly, on 27th and a twitchable immature male at Spurn, East Yorks, on 29th. Four Hoopoes included a singing male in Folkestone, Kent, from 27th. Also from the south, a Woodchat Shrike graced Lundy, Devon, from 24-27th. There were a couple of records of European Serin in Norfolk, with a more typical occurrence involving a brief bird at Dungeness, Kent, on 27th. A light scattering of European Bee-eater records predominately came from southern counties, although one reached as far north as Sanday and North Ronaldsay, Orkney.

The Snowy Owl remained on St Kilda, Outer Hebrides, to at least 25th. A Black Kite flew up the west coast of Yell, Shetland, on 24th, and there were also reports from Cornwall, Wiltshire and Somerset. A female Red-footed Falcon was at Tacumshin, Co Wexford, from 27-29th, while another showed very well at Isle Brewers, Somerset, on 28-29th. News broke of a female Little Crake on 23rd, the bird having been audible at Ouse Fen, Cambs, on 21st, but there was no further sign of it subsequently.

A Gull-billed Tern was seen along the River Severn between Slimbridge and Fretherne on a few occasions on 25th and 27th, while the Forster's Tern was still showing at Tacumshin during the week. A beauty of a White-winged Tern showed well at Burnham Overy, Norfolk, from 23-26th, with fly-bys at Cottam, Notts, and Marshside, Lancs, on 25th.

After last week's Terek Sandpiper, Rye Harbour scored heavily again on 24th with a Broad-billed Sandpiper. A Semipalmated Sandpiper was at Loch Ordais, Lewis, on 25th. A Baird's Sandpiper was on the beach at Marazion, Cornwall, on 28-29th. An excellent inland record of White-rumped Sandpiper came from Middleton Lakes, Warks, on 25th, with another in south-east Co Wexford from 26-28th. A total of five Pectoral Sandpipers included new birds in Orkney, Shetland and Northumberland, the last of which showed well at Druridge Pools from 26-29th. Around 15 sites hosted Temminck's Stints. 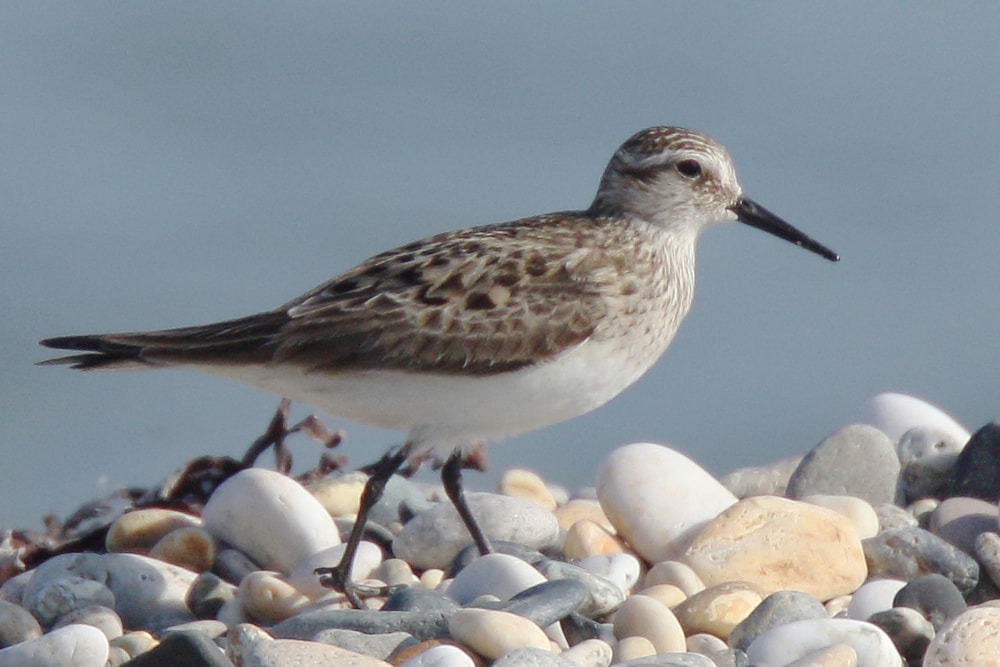 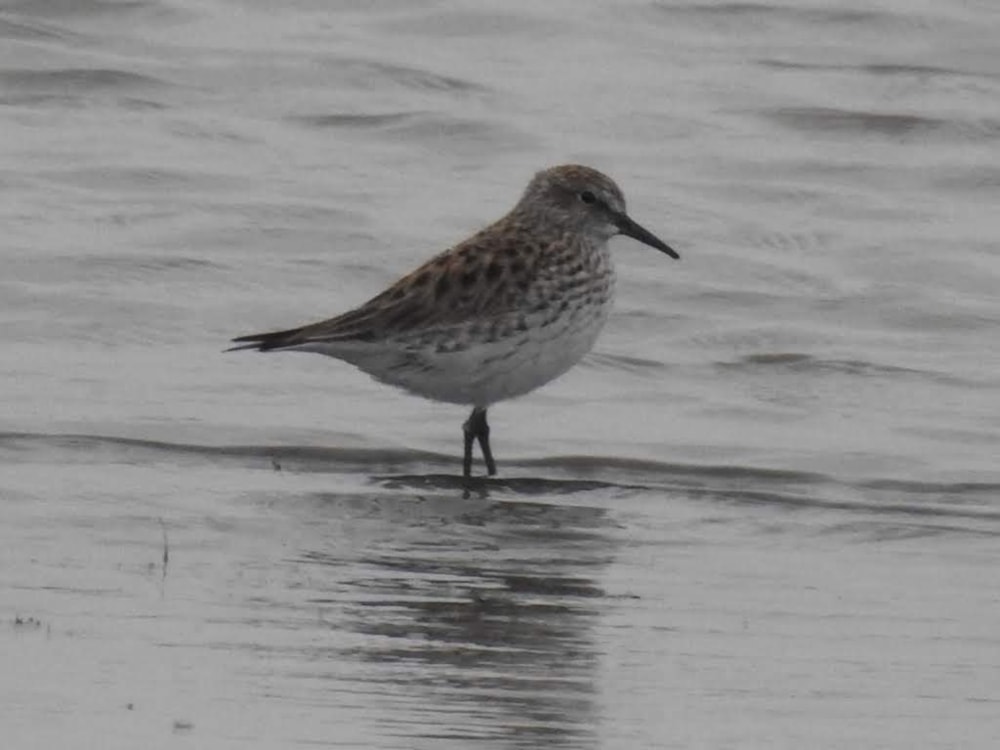 Tacumshin hosted an American Golden Plover from 24-27th, with another at Skaw, Unst, on 29th. A Kentish Plover showed well at Kingston Seymour, Somerset, on 28-29th. Three Black-winged Stilts flew over Rye Harbour, East Sussex, on 25th, with two again there on 27-28th. Meanwhile, the regular male was at Eldernell, Cambs, to 26th, but then visted Rutland Water again on 27th before returning to Frampton Marsh, Lincs, on 28th and then moving to nearby Freiston Shore on 29th. A male Eurasian Dotterel lingered at Flamborough Head, East Yorks, all week, while other singles were at Rattray Head, Aberdeenshire, and Hoy, Orkney. 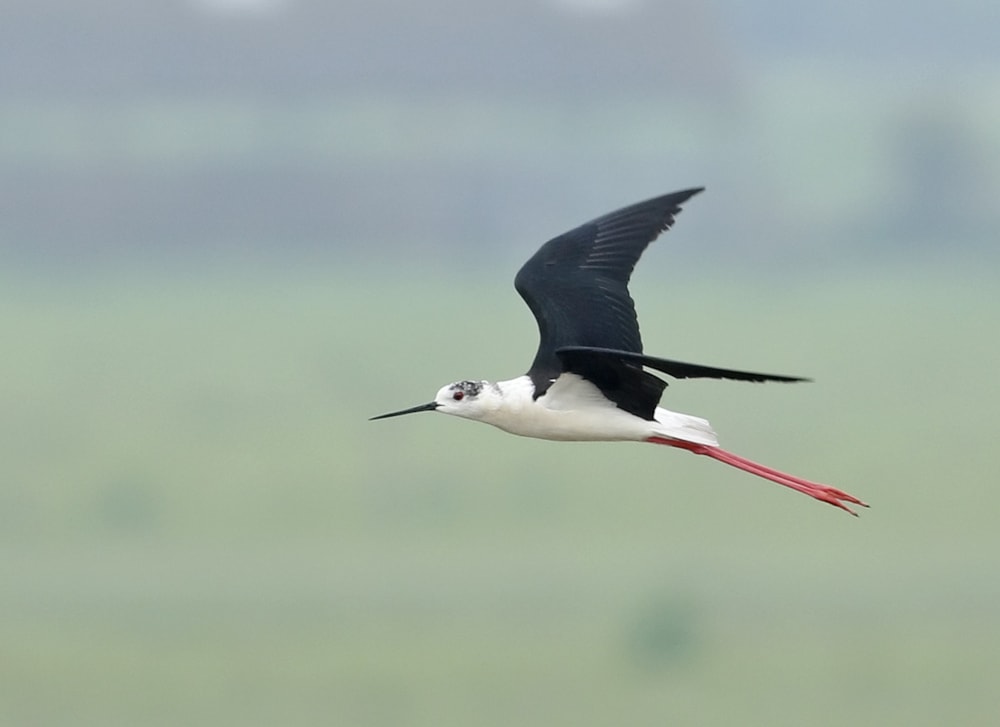 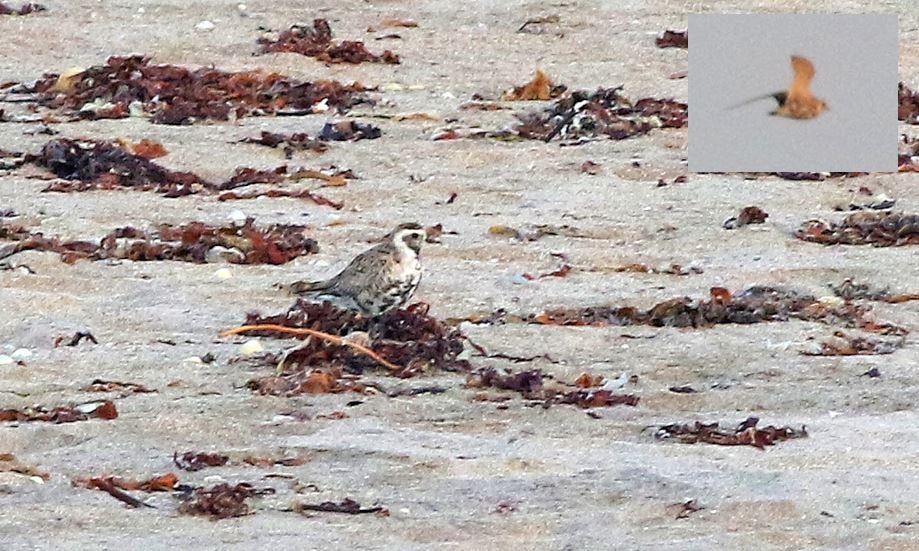 Waterbird news included the continuing American Black Duck at Strontian, Highland, while the Pied-billed Grebe also remained at Loch Feorlin, Argyll. A new American Wigeon was unearthed at Broad Lough, Co Wicklow, on 24th, with two found near Loch Ardvule, South Uist, on 23rd and the Northumberland drake still at Grindon Lough. Just a single Green-winged Teal was seen – a drake on Islay, Argyll. Rutland Water hosted a Ring-necked Duck on 26th, with another on South Uist. Impressively, three Surf Scoter were off Musselburgh, Lothian, on 25th. Two White-billed Divers were still off Tory Island, Co Donegal, on 25th, with another north past Whitburn, Durham, on 27th and one off North Ronaldsay, Orkney, on 29th. A Purple Heron that flew north past Thorpeness, Suffolk, on 28th was presumably the bird seen at Minsmere, Suffolk, the following day. A Glossy Ibis was seen at several sites in coastal south Lincolnshire, with others in Nottinghamshire, Northumberland and Aberdeenshire. A Black Kite flew over Swinefleet, East Yorks, on 28th.

Seabird news was thin on the ground, although an early Wilson's Storm Petrel was noted from a pelagic out of Baltimore, Co Cork, on 24th.

A singing Sora was a great find near Vretstorp, Sweden, on 29th. Other highlights in the country included a Moltoni's Warbler trapped and ringed at Ottenby, Öland, and a Stejneger's Scoter near Mörbylånga, both on 26th. In neighbouring Norway, an Oriental Pratincole at Hå, Rogaland, on 27-28th is presumably the recent Swedish bird.

In The Netherlands, a Greater Spotted Eagle flew over Texel on 27th, with a Bearded Vulture also seen at several sites from 27th.

The long-staying Dwarf Bittern was still at Llanos Pelados, Fuerteventura, on 28th. Other records included Poland's fifth Slender-billed Gull at Buda Stalowska on 28th and Armenia's first Black Lark at Vedi Gorge on 24th. A Greenish Warbler on Isola Ventotene on 27th represents just the second record for Italy, while Cape Verde's fourth Plain Swift was on Sal on 24th.