It was hard to know which way to look during the penultimate week of August, with rarities from all points of the compass spread across Britain and Ireland topped off with some early Nearctic waders, quality migrants and several exciting seabird records.

Norfolk grasped the week's biggest prize of a hefty rarity roll-call, with a twitchable Eleonora's Falcon from 26th. The bird, a dark-morph first-summer, moved between Horsey, Winterton and Hickling Broad before settling at the latter on 26th and 29th. It is quite extraordinary that Britain had never had a twitchable individual before 2022, yet has now managed two in the space of just four months. It is the third for Norfolk, following much briefer individuals in exactly the same area in 1987 and 2020. The opening days of what looks set to be a sustained period of easterlies produced in style with a Steppe Grey Shrike at Chipping Sodbury Common, Gloucestershire, on 29th. Unsurprisingly a first for the county, the record stands out in a national context as being remarkably early, becoming the earliest autumn record by nearly three weeks. Of the previous 27 records across Britain, 25 have occurred between mid-September and early December, in addition to single records from Cornwall in April 1992 and a surprise midsummer example between 17 June and 12 July 2003 at Ballaghennie, Isle of Man. A trio of Central Asian warblers delivered a selection of tea-coloured goodness to Britain and provided an ample supporting cast to the mega-rare Lanius. Interestingly, two of these were in the South-West, with the largely clear skies along the east coast allowing them and the shrike to 'funnel' through Britain in short order. The pick of the bunch of the trio was a fine Booted Warbler at Higher Moors, St Mary's, on 28-29th, the first for Scilly since 2014. 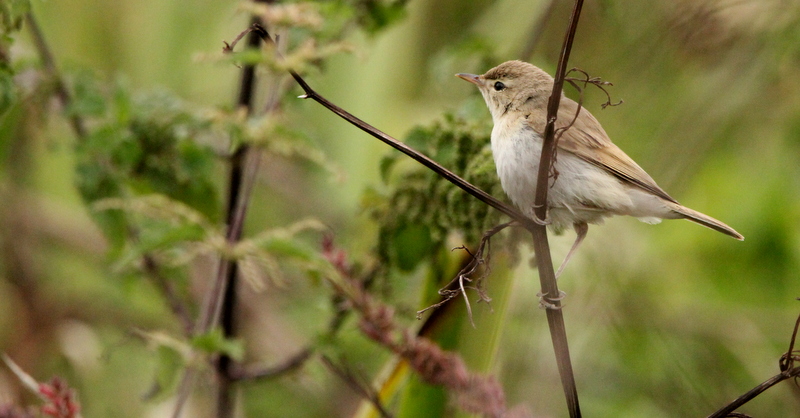 Paddyfield Warblers were instead reserved for the ringers, making their way into mistnets at Nanjizal Valley, Cornwall, and North Ronaldsay, Orkney, both on 29th. The young Aquatic Warbler ringed at Nanjizal Valley last week hung around until 26th, racking up 12 days at the site. A considerable influx of European Rollers outside of their normal range during August has seen a number found across north-west Europe. From 25-27th, it was Britain's turn to join in on the action, with a juvenile at Timberland, Lincolnshire – the county's first since 2008. Incidentally, another another exceptional outlier reached Thailand mid-month, becoming the first for South-East Asia in the process. Back to Shetland and action on Fair Isle peaked with an elusive Great Snipe on 22nd. Otherwise, the week's roll-call included Melodious Warbler, Marsh Warbler, Shore Lark, up to three Icterine Warblers, and multiples of both Barred Warbler and Common Rosefinch. Barred Warblers began to arrive in small numbers, including a notable inland bird trapped and ringed at Wintersett Reservoir, West Yorkshire. Seven were in the Northern Isles, with another in Northumberland. In Pembrokeshire, a Western Bonelli's Warbler was on Skomer on 29th, with a probable Blyth's Reed Warbler in Norfolk at Winterton Dunes. A smattering of Citrine Wagtails incuded a rare Irish record at Tacumshin, Co Wexford, from 27th. Others saw two in South-West England (at Portland, Dorset, and Tresco, Scilly), one in Wales (at Goldcliff Pools, Gwent) and three in Shetland. 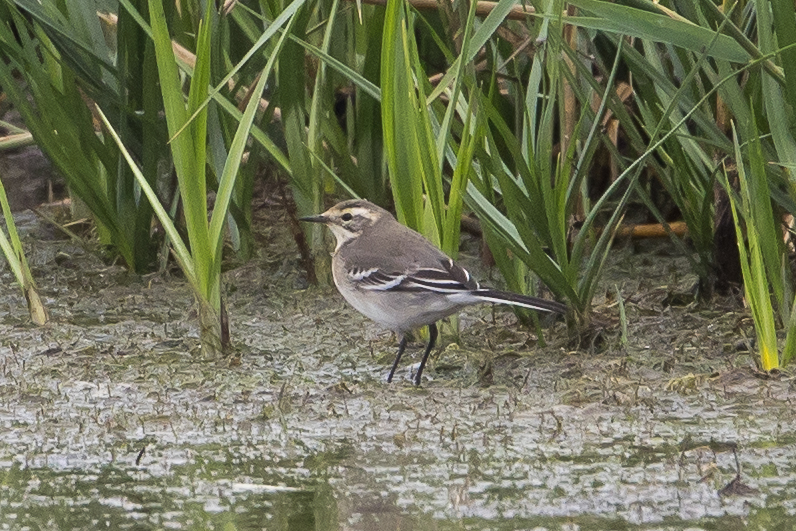 Ortolan Bunting has undergone a noteworthy status change across Britain thanks to the proliferation of overnight sound-recording devices. This week, birds flew over gardens at Whetstone, Leicestershire, and Biggleswade, Bedfordshire, in the early hours. Another was at Skewjack, Cornwall, while a probable flew over St Catherine's Point, Isle of Wight. Isle of May, Fife, and a number of Northern Isles sites hosted Common Rosefinches, while a European Serin was at Sandwich Bay, Kent.

An amazing Wryneck record saw one fly into the United Sports Bar at Scarborough, North Yorkshire, on 29th before being successfully released. Others were widely scattered across southern and eastern England, with a lone outlier on Unst, Shetland. Of these, a bird inland at Thursley Common, Surrey, on 24th was found to be wearing a ring. This could be partially read from photos taken in the field, with 'X9' just about visible. Remarkably, this is a match for a bird ringed in Suffolk at Landguard NR on 19th (code 'TX94072'), marking a fantastic relocation. After successfully fledging four chicks, the European Bee-eaters departed Trimingham, Norfolk, on 25th, with access to the RSPB viewpoint now closed. Three Hoopoes were noted – in Devon, Scilly and Aberdeenshire. Shorebird highlights were again headlined by the same two species as last week. After doing a bunk from Aberdeenshire after 21st, the adult male Greater Sand Plover relocated more than 340 km due south to the beach at Redcar, Cleveland, on the evening of 25th. A bonafide mega in as smart a plumage as this was always certain to prove popular, particularly at an accessible location over the August Bank Holiday weekend. So it proved, with this Cleveland first showing well off the promenade to all-comers until the week's end. On 29th, an adult Sharp-tailed Sandpiper was unearthed at Langness, Isle of Man – a first for the archipelago. Ten long years since Britain's last mean it would be widely appreciated if it was to make the short journey east to Morecambe Bay. A first-winter Wilson's Phalarope was a smart find at Loch Paible, North Uist, on 29th and just the third for the Outer Hebrides, with a rare Hebridean Temminck's Stint there the previous day. Seven Temminck's were in England, including a popular juvenile in Nottinghamshire. Pectoral Sandpipers were logged at a respectable 18 sites, including several youngsters. An early juvenile Lesser Yellowlegs was at Dundalk, Co Louth, from 26th, with a Long-billed Dowitcher at Doonbeg, Co Clare, on 29th. American Golden Plovers were in Fife, Orkney and Co Wexford, while a White-rumped Sandpiper remained in Lothian. The star of the 2022 Scilly pelagic season arrived in style on its final weekend, with a Fea's/Desertas Petrel spending three minutes in the wake behind the Sapphire on the evening of 26th. Two further Fea's-type petrels were noted this week – birds flew past the Scillonian III off Land's End, Cornwall, on 22nd and Great Skellig, Co Kerry, on 24th. Four Cornish seawatching sites again boasted Wilson's Storm Petrels from land, with birds off Scilly on four dates. Others were off Cos Cork, Clare and Kerry. Both Great and Cory's Shearwaters were again recorded in the North Sea, while a Pembrokeshire pelagic boasted a Great Shearwater on 24th. Gleefully enjoyed were a number of Sabine's Gulls and Long-tailed Skuas along the North Sea coast between Northumberland and Norfolk, with Grey Phalaropes off coastlines in south-west England, Ireland and Argyll. Circus magic saw both juvenile Montagu's and Pallid Harriers recorded – a Montagu's flew south out to sea over Portland, Dorset, on 25th, while a Pallid was over Fairlie Moor, Ayrshire, on 28th. Black Kites overflew Bartinney Downs, Cornwall, and Unstead, Surrey, while a probable male Red-footed Falcon was reported in Bedfordshire. On 27th, a Snowy Owl – perhaps the regular female – was on machair at Kildonan, South Uist. A remarkable Corncrake occurrence saw one picked up exhausted on the sea just off Cullercoats, Northumberland, by a kayaker before being successfully released onto dry land later that afternoon. A rare Nottinghamshire record saw one observed briefly at Idle Washlands. Spotted Crakes were at a respectable 10 sites across England, with half of them new in. 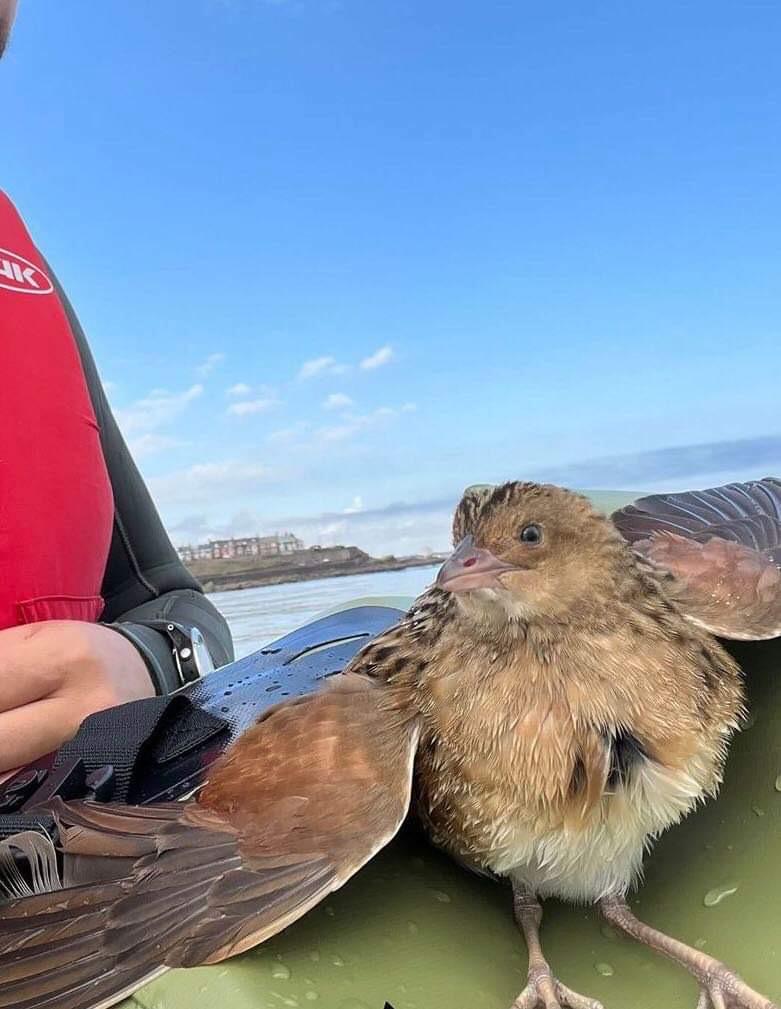 Purple Heron sightings included at least four reported from Scilly and a notable bird tracked up the River Tweed between Berwick-upon-Tweed, Northumberland, and Teviot Haughs, Borders. The unringed White Stork was again at Stanway Green, Essex. Amazingly, a drake Harlequin Duck off St Kilda, Outer Hebrides, on 23-24th appears to be a different bird to one present on Unst, Shetland, earlier this month. This latest male is lacking a vertical flank line, has a missing nape stripe, and a differently-shaped ear covert spot and blaze – perhaps signs of immaturity. A possible Blue-winged Teal logged along the River Severn past Purton, Gloucestershire, would have proved the first county record since 1993 if confirmed. At least one female American Wigeon held on at Lough Beg, Co Londonderry, as did the young drake Ferruginous Duck at Daventry Reservoir, Northamptonshire, and Pied-billed Grebe at Loch Feorlin, Argyll. The King Eider continued at Musselburgh, Lothian, with the Black and Surf Scoter duo both off Blackdog, Aberdeenshire. Other Surfs were off Lunan Bay, Angus & Dundee, and Brandon Bay, Co Kerry.

A small influx of Brown Boobies into the Bay of Biscay saw birds reported off three seawatching sites in northern Spain – Armintza, Basque Country, on 18th, Estaca de Bares, Galicia, on 21st and Luces, Asturias, on 23rd – with another off Hoëdic Island, France, on 17th. Elsewhere, at least one Lesser Flamingo remained at Laguna de Fuente de Piedra, with Western Reef Herons at Urdaibai, L'Albufera de València and Platja d'Aro. A Pacific Golden Plover was at Sant Jaume d'Enveja, Catalonia, with an Elegant Tern at Cartagena.

A Zino's Petrel photographed from a pelagic off Graciosa on 23rd is the second for the Azores and just the fifth confirmed anywhere away from Madeira. The White-winged Crossbill, meanwhile, lingered at Nordeste, São Miguel, until 23rd at least. Wader action included three Semipalmated Plovers on Terceira, a single on Pico, and two Spotted Sandpipers on Terceira. In France, a Great White Pelican was at Villars-les-Dombes and an Elegant Tern remained in the Camargue. Just over the border, a Bonelli's Eagle flew north-east over De Panne, Belgium, on 24th, while the adult male Greater Sand Plover was again on Texel, The Netherlands, on 26th.

Belated news from Poland saw the country's first Siberian Northern Shrike trapped and ringed at Rożniątów on 11 November 2021. Back in the present day, a Sociable Lapwing was at Wólka Zatorska from 27th, with Germany's seventh Audouin's Gull on Greifswalder Oie. A juvenile Mediterranean Gull at Þórshöfn was just the fourth for Iceland.