After a stormy start to the week, the weather slowly settled down to reveal a notable deposit of Kittiwakes across inland waterbodies, with no fewer than 125 at Grafham Water alone on 21st. However, spring is seemingly now knocking at the door: Northern Wheatears were at five south-western sites, with Sand Martins at two and the first reported Little Ringed Plovers back in Lancashire.

Big news of the week concerned the reappearance of the adult Egyptian Vulture at Lough Funshinagh, Co Roscommon, on 26th, in the vicinity of where it was last seen in late December. The bird was seen to roost that evening, allowing twitchers to gather before dawn. Fortunately, the bird showed on 27th for extended periods around a sheep carcass, leaving smiles all round. 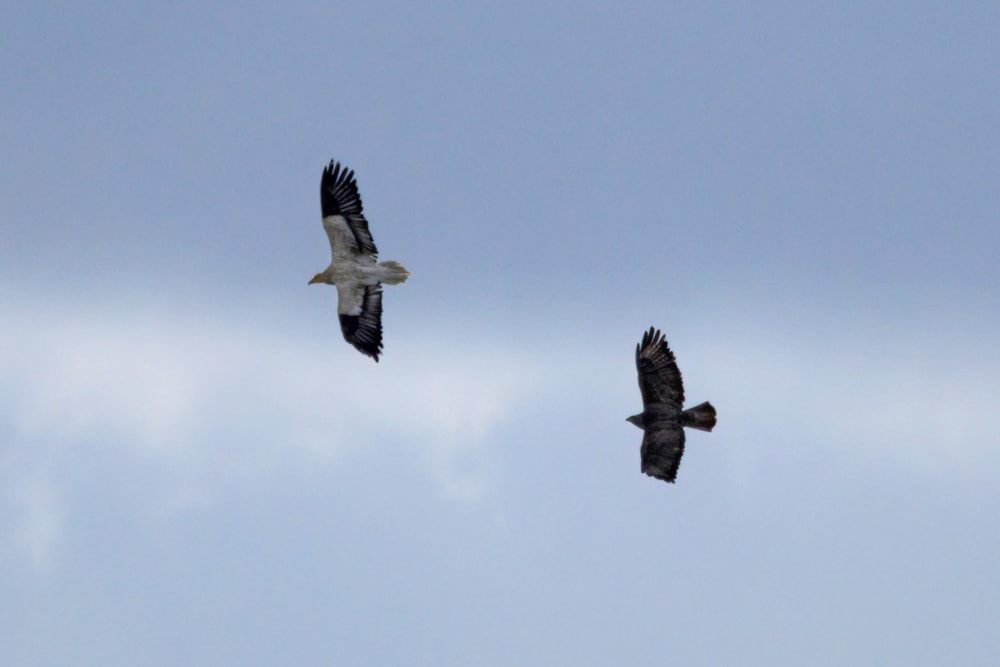 Non-birders reported a possible Belted Kingfisher at Barton-under-Needwood, Staffordshire, on 22nd. Given the high river levels in Lancashire it's perfectly feasible the long-staying male has decided to move south. Unfortunately, there were no follow-up reports but given this is how the original news came out, it's one to keep an eye on.

Otherwise, the rarity roll-call was rather familiar. The American Robin lengthened its stay in Eastbourne, with the Hume's Leaf Warbler still down the road for supporting cast. The latter is spending more time in a garden across the road from the promenade, which birders have been asked not to enter. 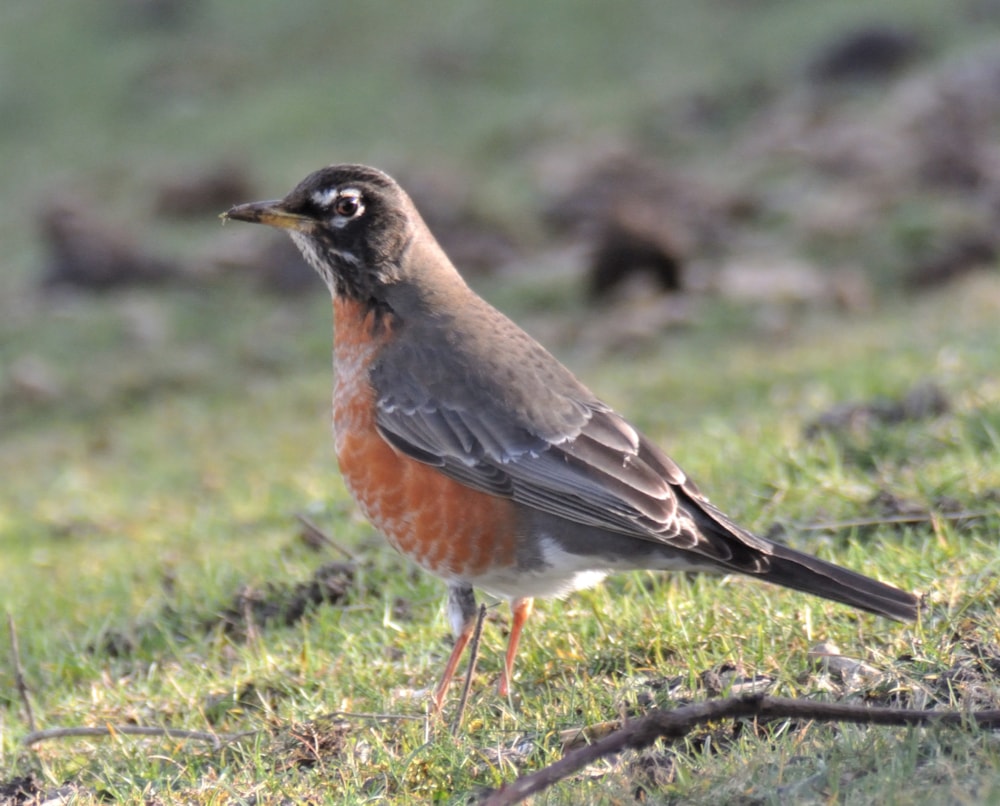 The Double-crested Cormorant continued at Doon Lough, Co Leitrim, with a particular liking for a certain post along the north shore. The American Coot at Lough Gill, Co Kerry, seems to have gone to ground, but those at Lough Yganavan, Co Kerry, and Lady's Island Lake, Co Wexford, performed throughout the week. 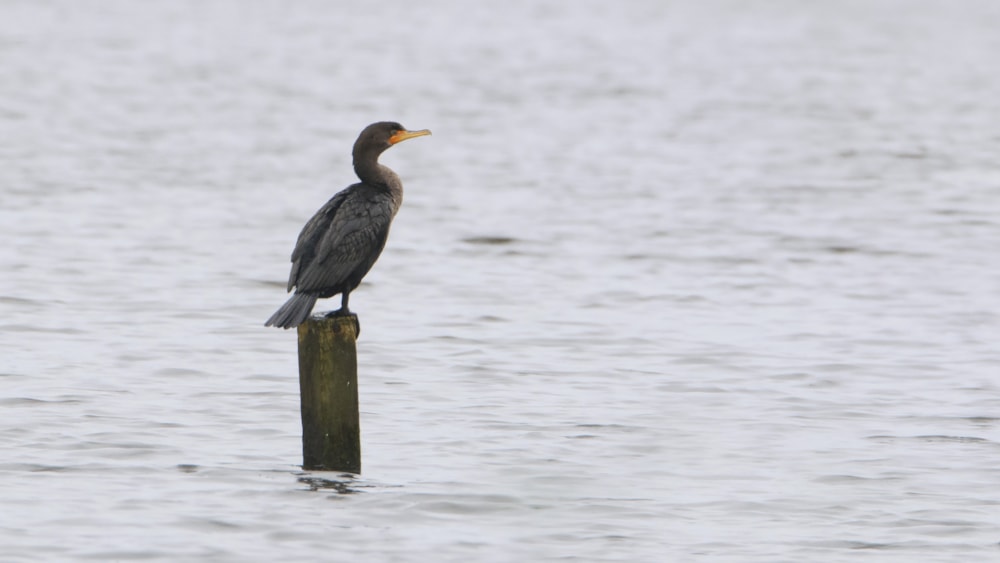 Both drake Baikal Teal remained in situ at Greylake RSPB, Somerset, and Swine Moor, East Yorkshire. The adult drake King Eider showed at Nairn most days, while the first-winter drake was less predictable off Edinburgh, Lothian. The Black Scoter moved back to Cocklawburn Beach, Northumberland, on 27th.

The young female Lesser Scaup was again reported sporadically at Abbotsbury Swannery, Dorset. Elsewhere, South Uist continued to boast three, with another three still on Islay, three still at Coatbridge, Clyde, and the first-winter drake still on Tresco, Isles of Scilly. The drake Ferruginous Duck reappeared at Ballysaggart Lough, Co Tyrone, on 22nd and offered decent views thereafter. The drake at Dorchester-on-Thames, Oxfordshire, was there until the week's end. 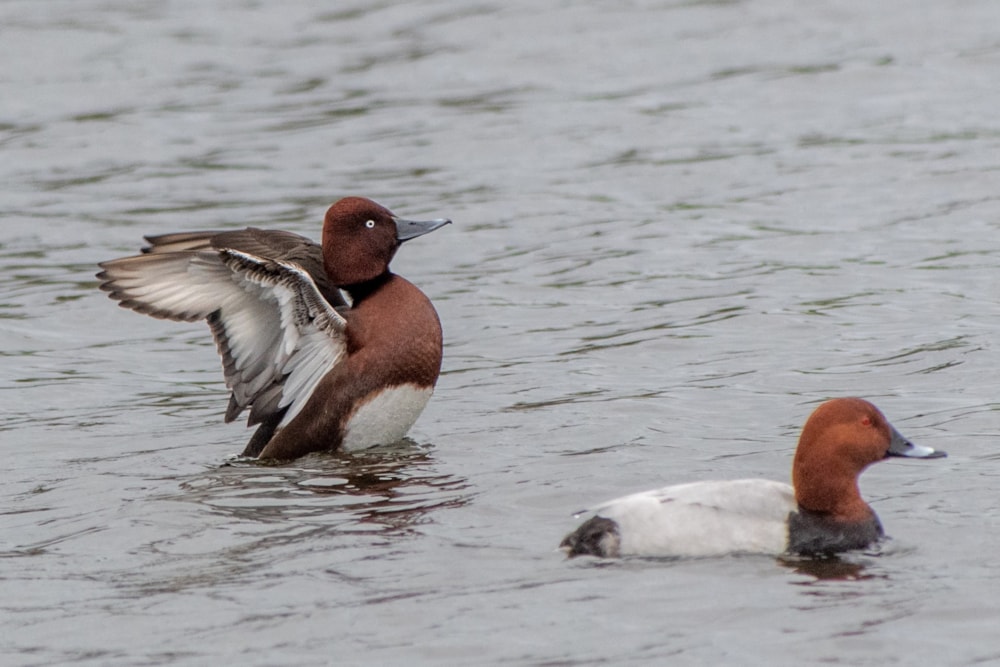 Green-winged Teal were split across 10 sites, the only new bird of the week at The Wilderness, Fife. American Wigeon appear to be going through a dry spell, with four birds in Britain (Idle Valley NR, Notts; Big Waters NR, Northumberland; Frampton Marsh RSPB, Lincs; and Crook of Baldoon, Dumfries and Galloway) and just one in Ireland (Ballyallia Lake, Co Clare). One species still doing well is Ring-necked Duck, with some 43 split across 30 sites this week, including five still at Lough Yganavan, Co Kerry, and six still at Kenfig Hill, Glamorgan. Three Surf Scoter remained off Pendine, Carmarthen, with two also off Llanddulas, Conwy, on 27th. Others lingered off Cornwall, Scilly and Lothian. The drake off Rossnowlagh, Co Donegal, was Ireland's sole report. An adult Grey-bellied Brant was mingling with the hrota at Greystones, Wicklow, on 21st, with at least one other in Dublin, between 21st and 27th. Single Black Brant were at Ferrybridge, Dorset, and Skeffling, East Yorkshire, with two adults again reported at Coldharbour Lagoon, Kent. Three Red-breasted Geese were still on offer. The easiest was the rather vocal adult at Cley Marshes NWT, Norfolk, although the Essex bird remained along the River Crouch throughout. The Lincolnshire bird was still playing hard to get and was relocated at RAF Wainfleet on 21st.

Richardson's Cackling Geese had another healthy showing, with at least two birds on North Uist, one on Islay and two still around Lissadell, Co Sligo. Three Todd's Canada Geese were up for grabs: one with Greylags at Twatt, Mainland Shetland, on 22nd, and other singles with Pink-feet at Banks Marsh, Lancashire, on 23rd and Killimster, Caithness, on 24th.

The adult Ross's Goose moved between Pitlessie and Freuchie, Fife, from 26th. Ireland's sole Snow Goose remained with Greenland White-fronts around Lissadell, Co Sligo. Elsewhere, the trio of Snow Geese lingered near Loch Spynie, Moray, and another was at Sollas, North Uist, on 22nd. The Lancashire bird was last seen at Crossens Outer Marsh on 27th. 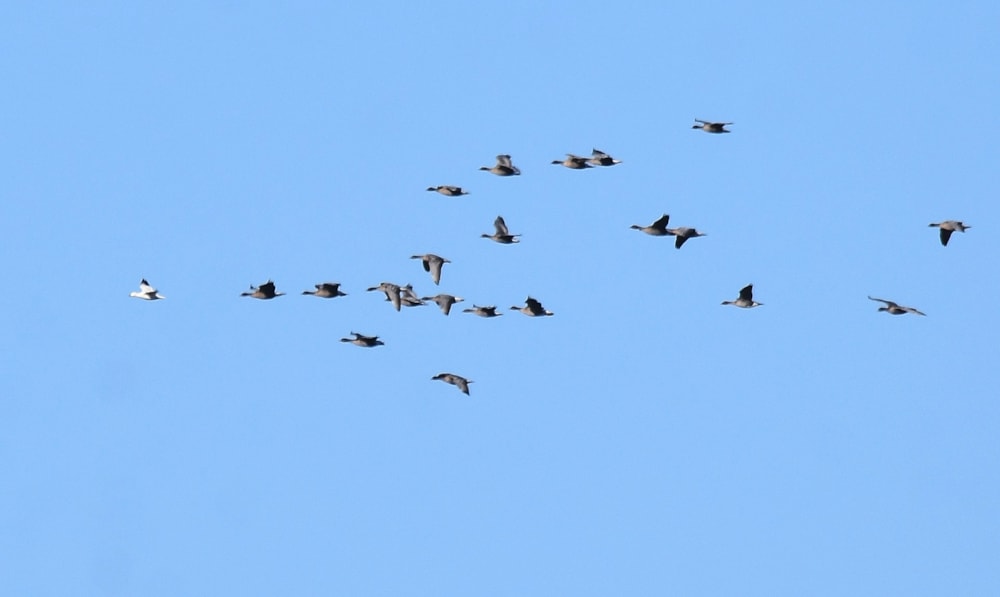 The juvenile Pacific Diver rode out another week at Eglwys Nunydd Reservoir, Glamorgan. A probable White-billed Diver off Baltimore, Co Cork, would be a rare bird for Ireland if confirmed. Lingering adults were off South Nesting Bay, Mainland Shetland, and Papa Westray, Orkney, while a juvenile was off Bamburgh, Northumberland, and another was at Kilnaughton Bay, Islay.

The adult Ross's Gull was reported daily off Kinnaird Head, Aberdeenshire, while the first-winter resurfaced at Mutton Island, Co Galway, on 22nd, where it lingered till the week's end. This winter's light arrival of Ring-billed Gulls made landfall in England, with a delightfully showy first-winter at Chew Valley Lake, Somerset, on 27th. Birds were reported from a further six sites, including up to two first-winters at Tralee, Co Kerry, and Blackrock Castle, Co Cork. 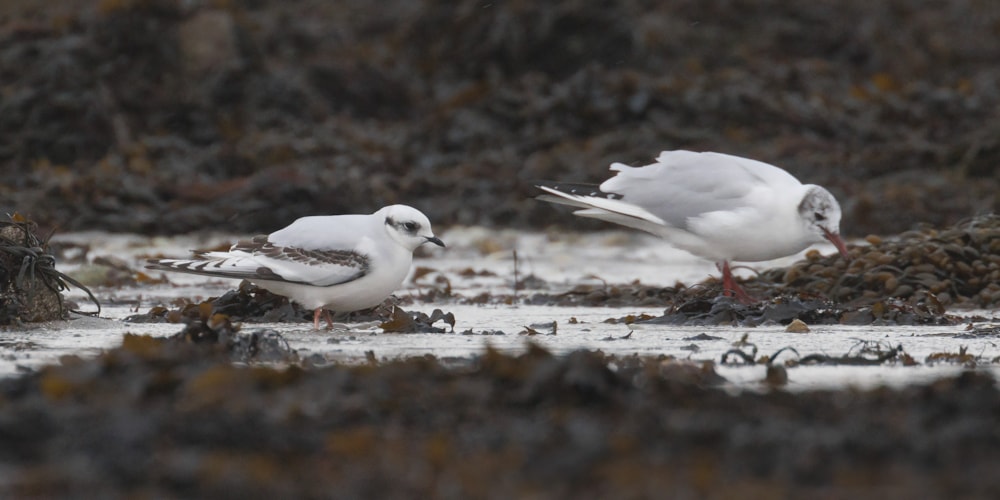 It's been a lean winter for white-wingers, so the small numbers deposited by recent rough weather were well received. Two new Kumlien's Gulls were thrown into the mix, with adults on Mainland Shetland on 21st and Skye, Highland, on 22nd. Three others were still around, most notably the smart adult in Newlyn harbour, Cornwall. Both Iceland and Glaucous Gulls saw an increase, with a strong north-westerly bias. 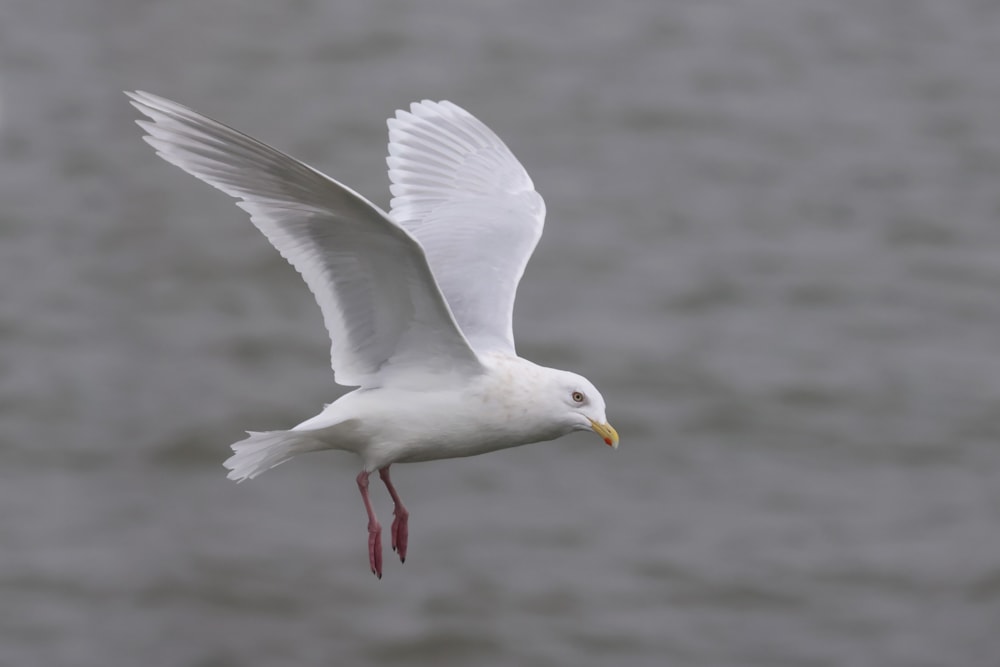 Galway's adult Forster's Tern has proved trickier to connect with in recent years so four reports in the Newtownlynch area in the past week was a good showing, no doubt helped by an increased number of birders in the area due to the Ross's Gull. A victim of the recent weather was a storm-blown Leach's Storm Petrel seen to be taken by a Peregrine Falcon on the River Parrett at Steart, Somerset, on 21st. The Lesser Yellowlegs remained steadfast at Minsmere RSPB, Suffolk. An unseasonal Eurasian Dotterel was picked out among the hordes of European Golden Plover at Thornham, Norfolk, on 21st and lingered in the surrounding area until 25th, when moved to Burnham Overy. A Grey Phalarope was busy spinning in the moat at Dunstanburgh Castle, Northumberland, from 25th. 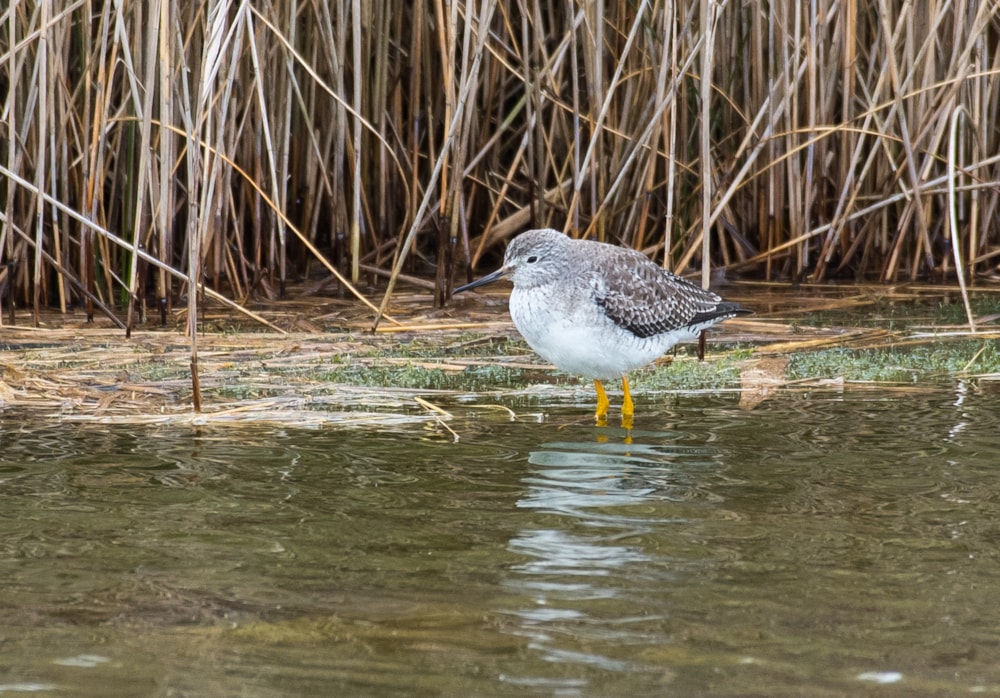 Five new sites hosted Glossy Ibis, including three over Swords Estuary, Co Dublin, on 22nd. Sizeable flocks continued elsewhere, including 11 still at Brading Marshes RSPB, Isle of Wight. The released White Stork remained at East Tilbury, Essex, until at least 23rd and the unringed bird could still be seen at Sandwich Bay, Kent, until 25th. An intriguing report of a night heron came from Sound, Mainland Shetland, on 27th, although there was no further sign when followed up. Here's hoping it wasn't a Yellow-crowned … 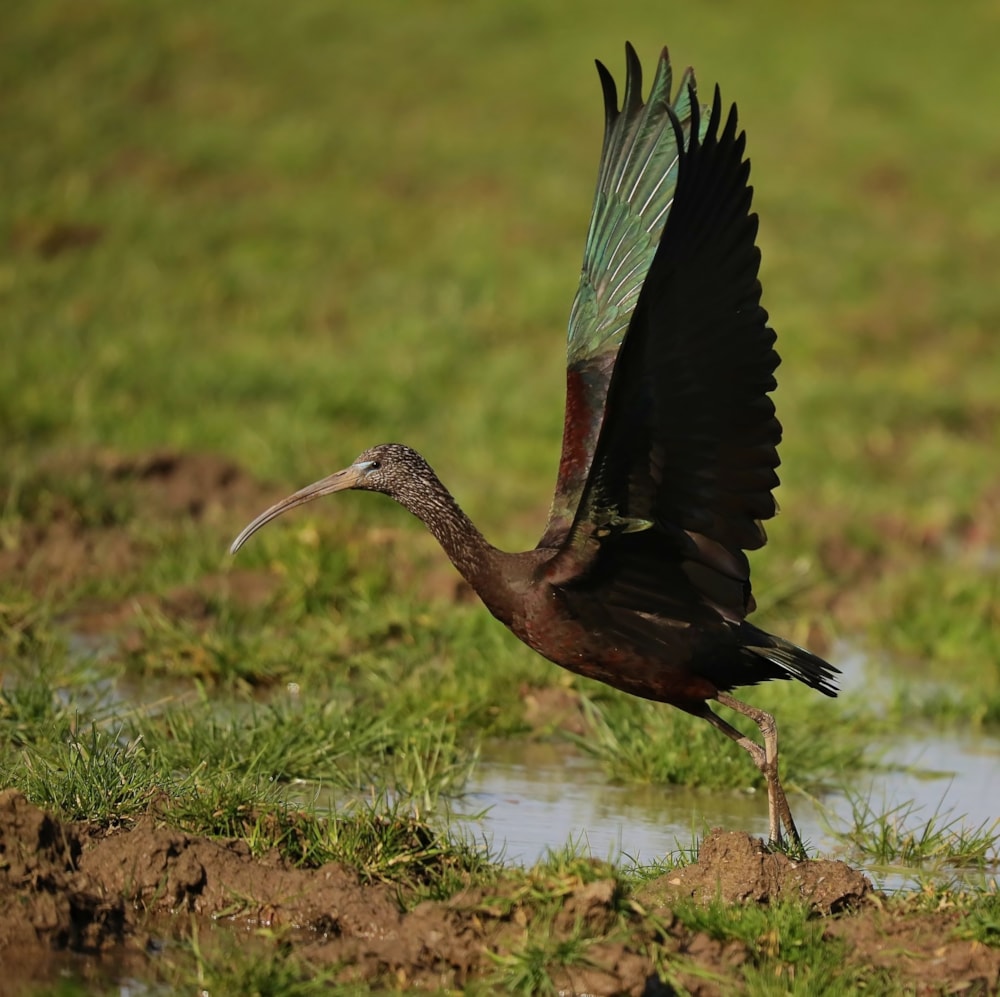 It was slim pickings for Great Grey Shrikes again this week, with just two seen: the overwintering bird at Bryn Trillyn, Conwy, and one again at Comberton, Cambridgeshire, on 27th. The Rosy Starling proved reliable at Pendeen, Cornwall, and the Dusky Warbler was last reported at Fordwich, Kent, on 23rd.

Scotland had the lion's share of the Waxwings, with a peak count of 20 at Ferness, Nairn, on 23rd, although it was the regular quartet at Nethy Bridge, Highland, that got the most attention. Away from here, one overflew Wangford, Suffolk, on 22nd and another was at Guisborough, Cleveland, the same day. Poundgate, East Sussex, held onto its Little Bunting for another week.

A smart female bunting was noted on the Aberdeenshire coast on 21st. Superficially resembling a Pine Bunting, but the yellow-fringed primaries and throat seem to consign it to the hybrid Pine Bunting × Yellowhammer camp.

There was curious news of an Egyptian Vulture near Aalst, Belgium, on 26th. Meanwhile, the Song Sparrow continued to flick over the Belgian-Dutch border at Prosperdorp. The drake Falcated Duck commuted between Testelt, Flemish Brabant, and Schulen, Limburg. The Western Swamphen remained at Alblasserdam, as did the Pygmy Cormorant at Utrecht. In France, a first-winter Franklin's Gull was showing nicely on the River Adour at Bayonne, Pyrénées-Atlantiques, on 19th.

The Swiss meena Oriental Turtle Dove held out at Sulgen until 26th at least with another, a first-winter, across the border at Freiburg im Breisgau, Germany. A Sandhill Crane was north of Freyenstein, Bradenburg, on 23rd and had moved to Fincken, Mecklenburg-Western Pomerania, by 27th. A drake Black Scoter was on the sea off Bad Doberan on 26th. The immature female Walrus was busy lounging around Thorsminde harbour, Central Denmark, on 22nd, and a Stejneger's Scoter was still off the Zealand coast on 26th. The wintering Siberian Rubythroat lengthened its stay at Vargön, Sweden.

Two adult Lesser Flamingos were mixing with the Greaters in Spain: one at El Hondo and another at Ebro Delta NP. The latter site also played host to the country's first White-tailed Lapwing, which had been found on 19th. 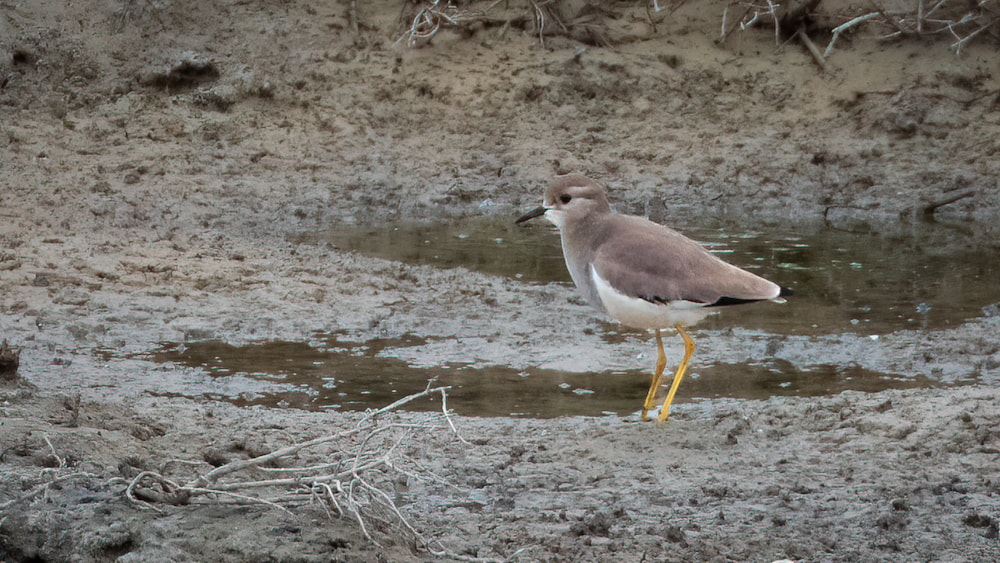 Azores news was restricted to long-staying rarities, while the Semipalmated Plover hung around on Tenerife, Canary Islands.