The story of the last two weeks – and perhaps the summer – concerns a veritable platter of seabirds in the South-West Approaches. It is the record-breaking number of Wilson’s Storm Petrels that will be of interest to most. Markedly difficult in most years away from pelagics to the so-called ‘Wilson’s Triangle’ off Scilly, the largest densities were 40 plus (and possibly more than 60) seen from a pelagic off Fastnet Rock, Co Cork, on 30th and at least 20 – including a single flock of nine – from a Scilly pelagic on 27th, with a further seven from another on 31st. Unsurprisingly, it was Porthgwarra in extreme south-west Cornwall that proved the most reliable mainland site, with one seen on most dates and notable counts of two on 22nd and four on 30th. Other coastal sightings include one off Cape Cornwall on 23rd, at least two seen from Lizard Point on 28th and again the following day; 29th also produced one past Rame Head and four from a Penzance pelagic. A probable passed Start Point, Devon, on 30th. Remarkably, an unprecedented minimum of 24 have been seen from mainland Cornwall so far this year. Good numbers were also seen from the Irish counties of Cork and Kerry. With far lower numbers noted than usual off the Atlantic coast of the United States, this bonanza is likely to be continue for the next few weeks at least, and provides perhaps the best chance for birders to connect with a Wilson’s away from Scilly. 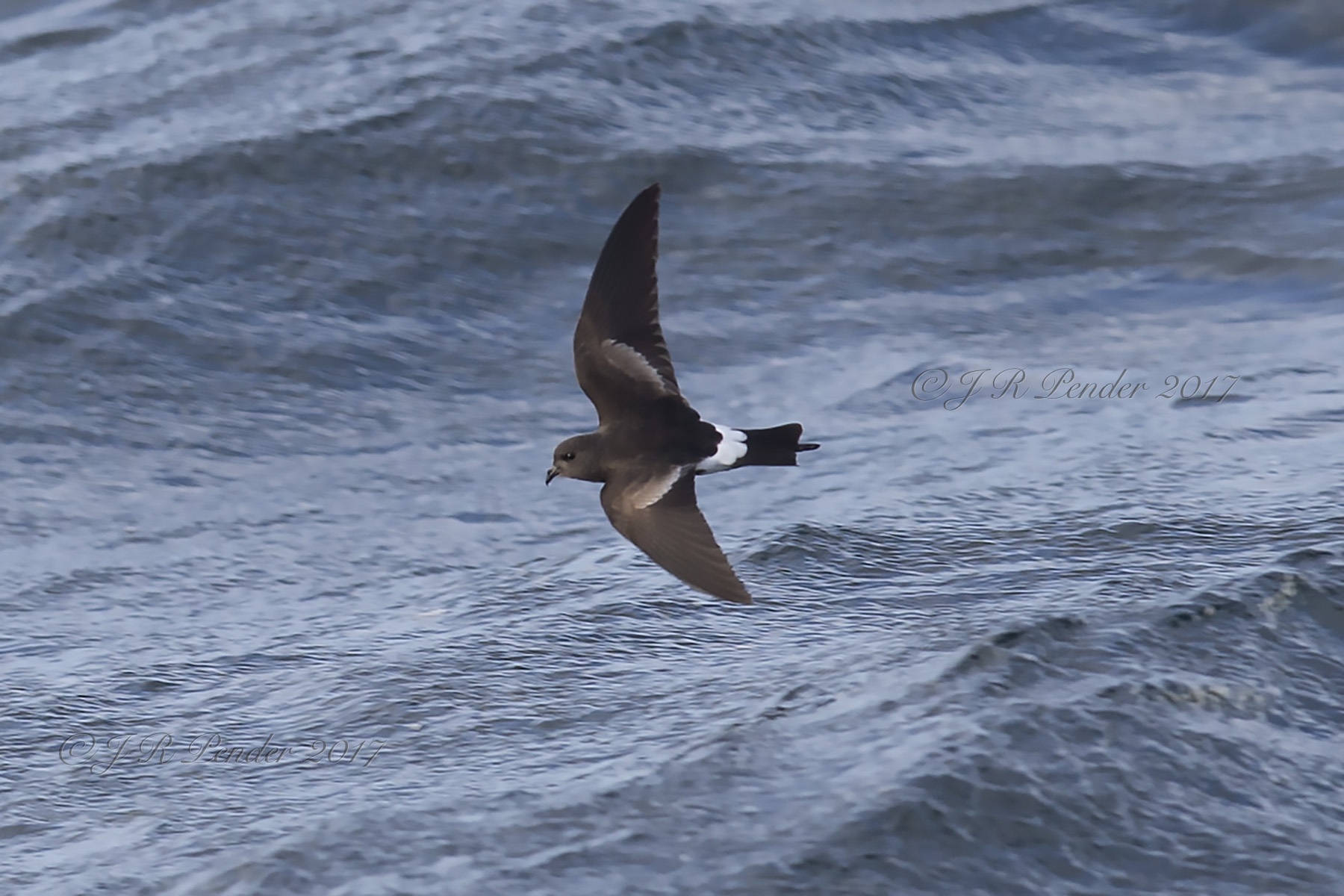 Mega seabird claims during the review period include a possible Bulwer’s Petrel past Porthgwarra on 22nd, with a probable Barolo Shearwater off there on 29th, and a potential Band-rumped Storm Petrel from Prawle Point, Devon, on 22nd. A probable Swinhoe’s Storm Petrel was heard twice during a petrel ringing session at Sumburgh Head, Shetland, on the evening of 31st. If confirmed, this must further provoke the question of what so many seem to be doing in the Atlantic Ocean during the summer months and may provide an easier target for twitchers than the intermittent Fair Isle duo, should it reappear during the coming weeks.

Back in Cornwall, the first-summer female Amur Falcon remained fleeting, being reported only once near St Buryan on 21st – not too far away from the last confirmed sighting on 17th. Black Kites were reported from Suffolk, Lancashire, Glamorgan and East Sussex. Wykeham’s raptor viewpoint in North Yorkshire continues to be reliable for Honey Buzzards, with up to three on show.

The moulting adult drake American White-winged Scoter lingered off Murcar Golf Course, Aberdeenshire, with three or more drake Surf Scoters still there too. Islay’s drake Ring-necked Duck remained at Loch Finlaggen till 29th. In Ceredigion, the female King Eider was still at the mouth of the River Leri, Ynyslas, and was visited briefly by an immature Ring-billed Gull on 22nd. The adult drake American Black Duck remained at Strontian, Highland, on 26th, while an unseasonal White-billed Diver was in Dunnet Bay, Highland, on 21st.

This year’s meteoric rise of rare breeding herons added another species this week, with a pair of Black-crowned Night Herons and two locally fledged juveniles announced as being present at Westhay Moor, Somerset. Marking the first British breeding record, one wonders what the next species will be to make the list. An individual of the American subspecies was still at Shrewsbury, Shropshire, and a juvenile was found at Whittle Dene Reservoirs, Northumberland, on 1st. Cattle Egrets continue to go from strength to strength, with new juveniles from Devon and Dorset. A juvenile Black Stork was a surprise at Dunsby Fen, Lincolnshire, on 24-25th; it was likely the same bird as that over Wykeham, North Yorkshire, on 21st and Woodwalton Fen in Cambridgeshire on 25th. Norfolk, Suffolk and Sussex hosted White Storks, while Glossy Ibises were reported from Kent, Devon, Somerset, Cornwall, Suffolk and Essex; most notable were flocks of 14 at Walmsley Sanctuary, Cornwall, from 31st and seven at Braunton Marsh, Devon, on 1st. Purple Herons were reported from Essex, Cheshire and Scilly. The male Little Bittern was seen again at Ham Wall, Somerset, on 25th, with 36 Spoonbills at Stiffkey Fen, Norfolk, on 1st an impressive count. 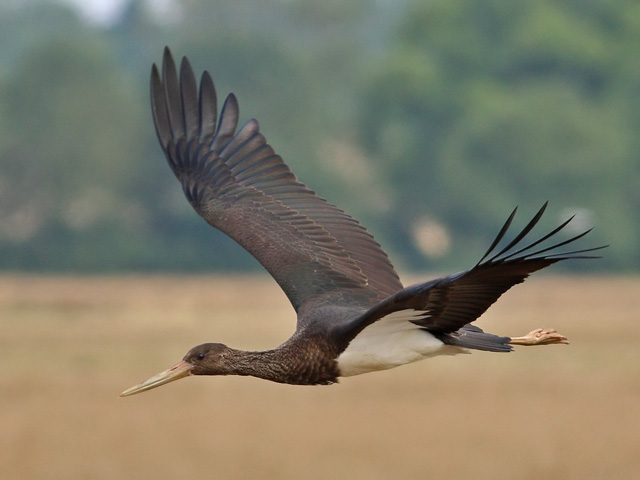 Fittingly, a period filled with so many rare seabirds coincided with big numbers of their scarce but regular stablemates; several thousand Cory’s Shearwaters were seen, with high counts of 296 from Lizard Point, Cornwall, and 181 from Berry Head, Devon, on 21st. Great Shearwaters spiked on the same date, with 82 logged past Berry Head and 68 passing Lizard Point. Scottish records of either species are always hard to come by, making a Cory’s from the Ullapool-Stornoway ferry on 21st and a Great Shearwater south past Rubha Ardvule, Outer Hebrides, on 27th eminently noteworthy. Likewise on the east coast, with one passing Sheringham, Norfolk, and another off Old Nab, North Yorkshire, on 24th. In Dorset, a lingering Great Shearwater off Portland Bill from 23-30th showed well at times with loafing gulls and proved surprisingly twitchable. 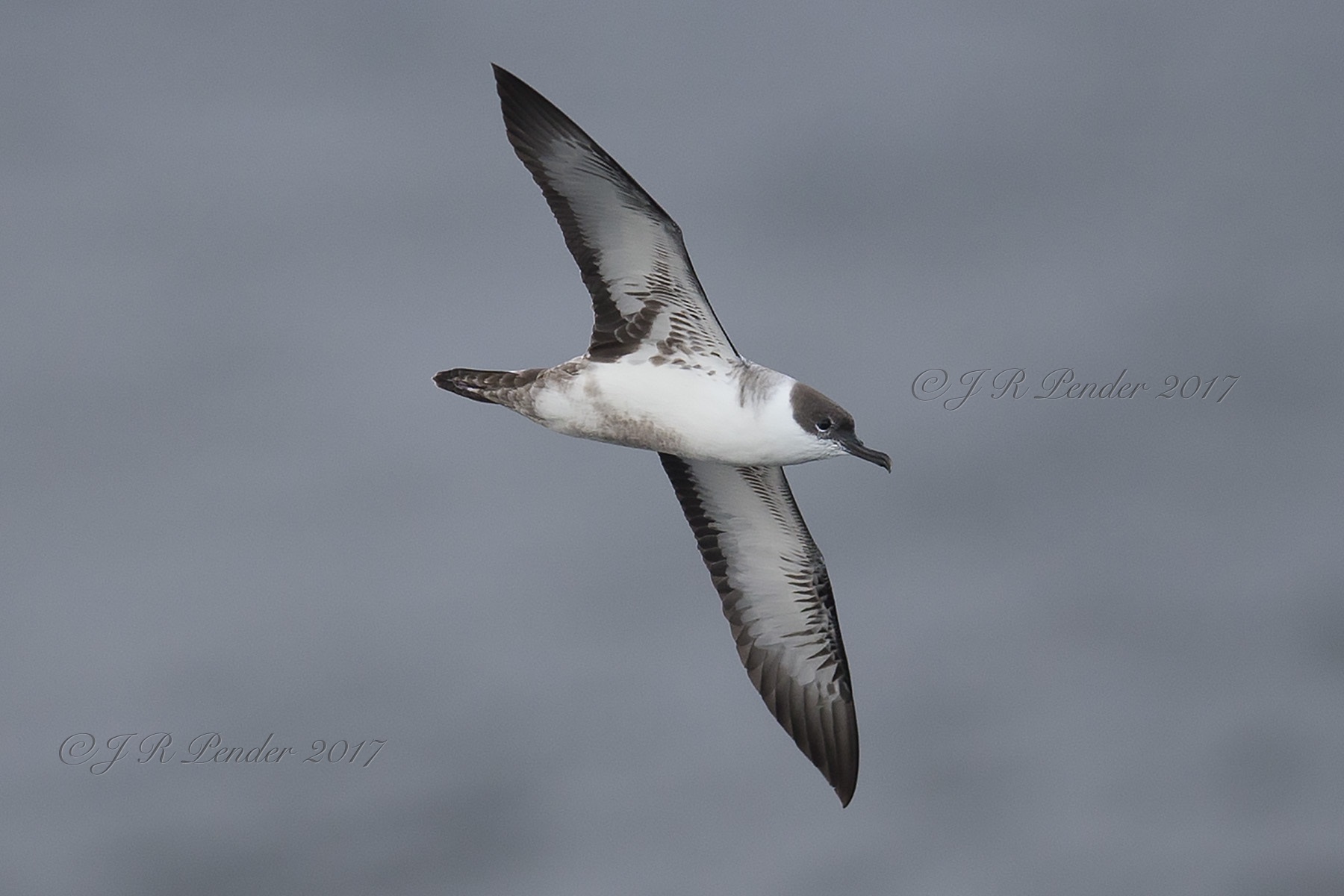 A juvenile White-winged Tern lingered at Kilnsea Wetlands, East Yorkshire, from 25-26th, moving to Far Ings, Lincolnshire, from 27th. Fair Isle’s fourth appeared on 21st. In Louth, the returning Forster’s Tern appeared at Soldier’s Point on 19th and remained either here or at Dundalk throughout. Meanwhile in Wales, the widely travelled red-ringed Caspian Tern reappeared at Kenfig NNR, Glamorgan, on 24th, moving to the National Wetlands Centre WWT, Camarthen, later that day. A Gull-billed Tern spent most of the morning of 26th at Martin Mere, Lancashire, while a possible flew west past Cley, Norfolk, on 29th. The Sabine’s Gull remained at Nosterfield Quarry, North Yorkshire, until 22nd at least. Others were seen off Co Durham, Norfolk, Dorset, Cornwall and Devon. Irish Ring-billed Gulls were seen at Blennerville, Co Kerry, and at Nimmo’s Pier, Co Galway – the latter a returning adult. As well as lingering birds at Oare Marshes, Kent, new Bonaparte’s Gulls were reported from Whitehead, Co Antrim, on 20th and Brownsea Island, Dorset, from 30th. A Leach’s Storm Petrel was ringed at Whitburn, Co Durham, on 1st. 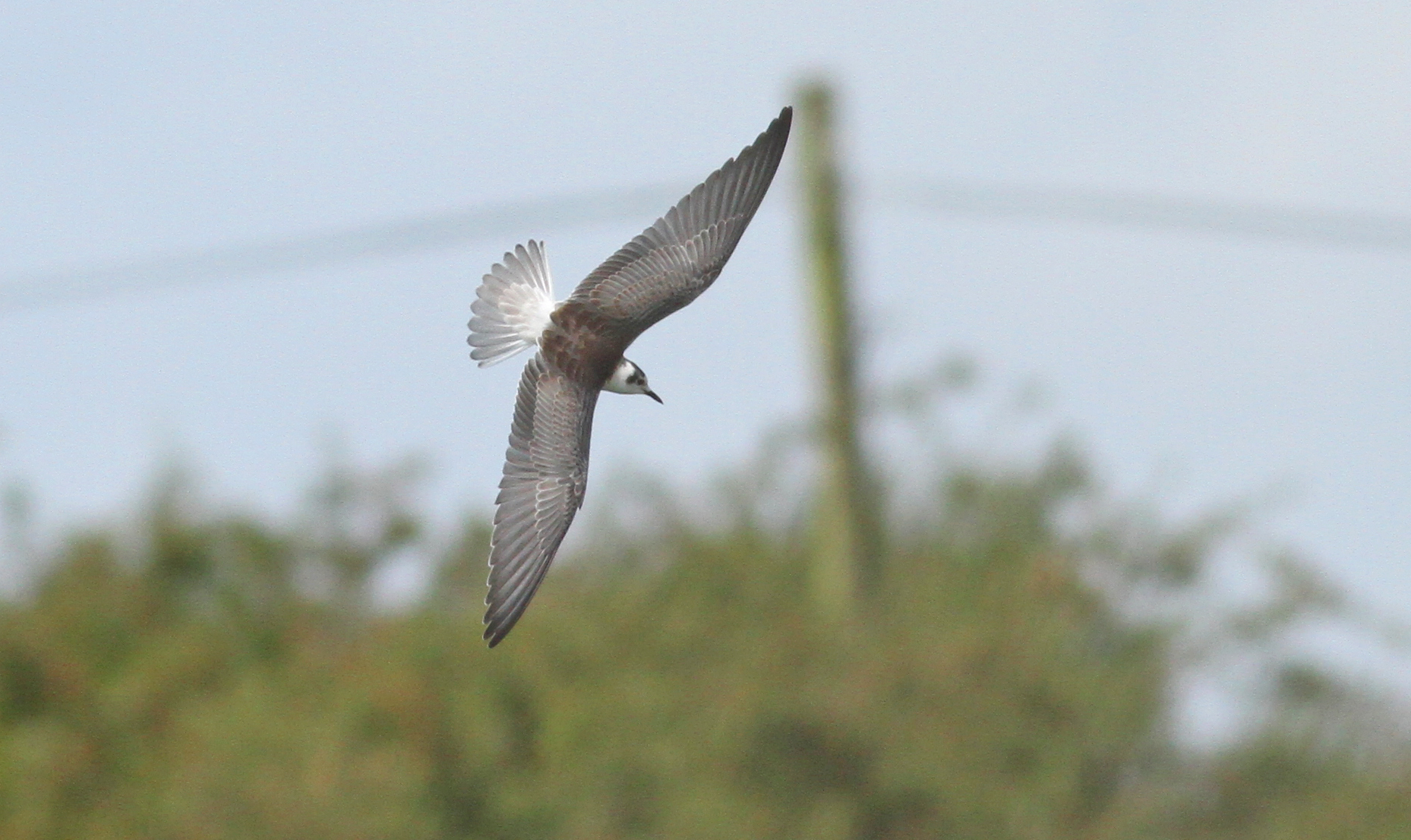 Following an influx in the Low Countries, the appearance of another Marsh Sandpiper – at Frieston Shore, Lincolnshire, on 25th and again briefly on 28th – perhaps wasn’t unexpected. One remained at Cliffe Pools, Kent, throughout and was sometimes present alongside 11 Black-winged Stilts, two pairs having bred at the site. Other remaining stilt families were still present; up to six still at Potter Heigham, Norfolk, throughout and four still at Ouse Washes, Cambridgeshire, until 26th, later moving to Pymoor on 29th. Three were reported from Oare Marshes, Kent, on 23rd. A popular Red-necked Phalarope remained at Frampton Marsh, Lincolnshire, until 24th; a pair remained on North Ronaldsay. One was seen at Pymoor, Cambridgeshire, early in the week, relocating to Ouse Washes on 28th. The bulk of the wader arrivals had a distinctly Nearctic feel. Tacumshin’s Semipalmated Sandpiper was still present on 21st, while an almost certain but all to brief probable was in Devon at Topsham on 24th. The week turned up three White-rumped Sandpipers. One was on Kilnsea Wetlands, East Yorkshire, from 21-28th, with the other two in Scotland at West Burra, Shetland, on 23rd and Baleshare, Outer Hebrides, on 30th. A possible flew south past Whitburn on 30th. In East Yorkshire, an adult American Golden Plover was found on the Humber at Spurn on 22nd, relocating to the same scrape as the White-rumped Sand on Kilnsea Wetlands on 25th, and there again on 30th. A Pacific Golden Plover, also an adult, graced North Cave Wetlands in the same county on 21st, a welcome county tick for some. Pectoral Sandpipers were seen in Northumberland, Kent, Cornwall, Greater London and Gloucestershire, with multiples in Norfolk and Lincolnshire. Popular individuals included those at Titchwell, Norfolk, Rainham Marshes, Greater London, Frampton Marsh and Dungeness, Kent. The first Temminck’s Stints of late summer were in Gloucestershire, Suffolk, Kent, Dumfries and Essex. Suffolk’s Collared Pratincole spent a day at Orford Ness on 22nd. 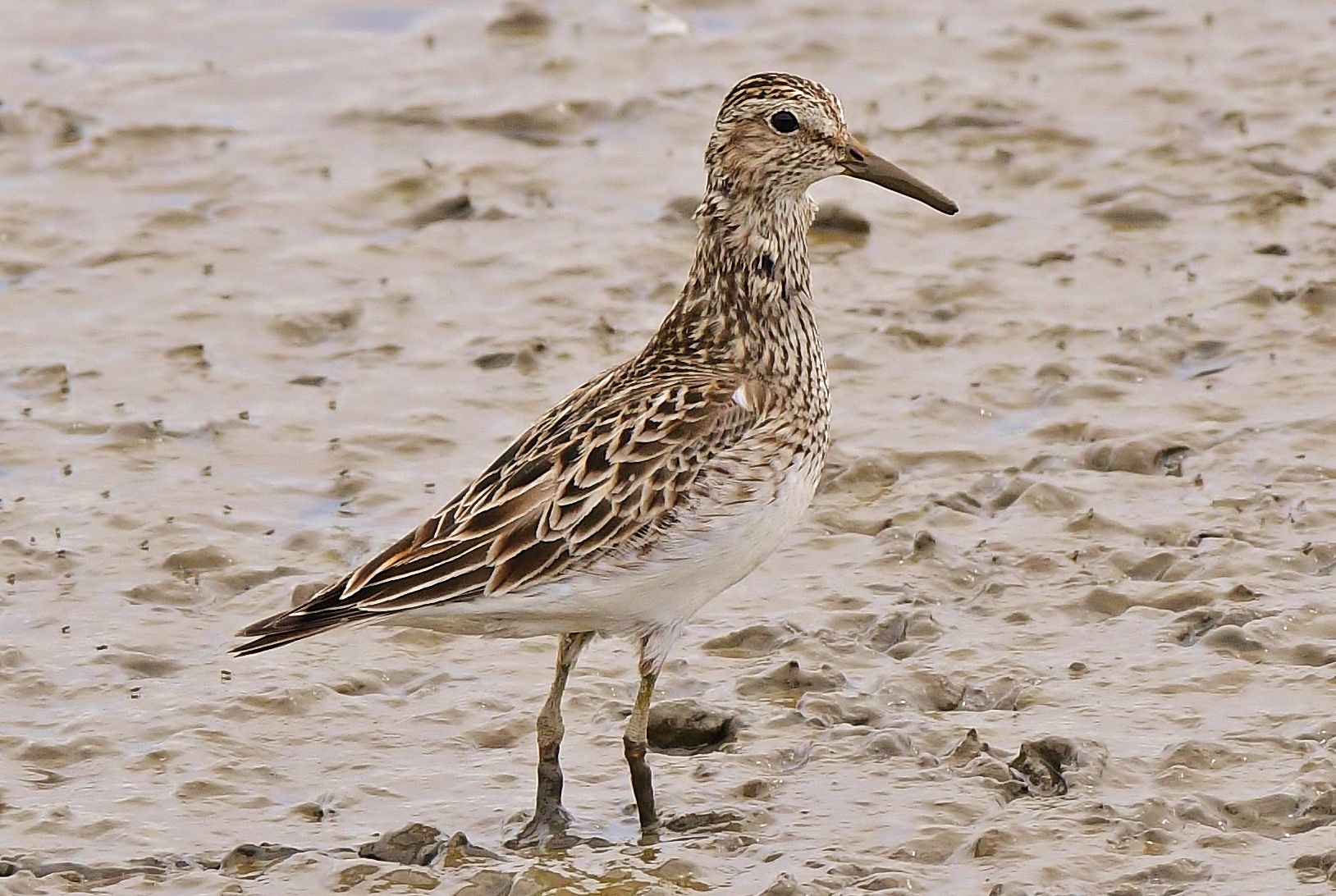 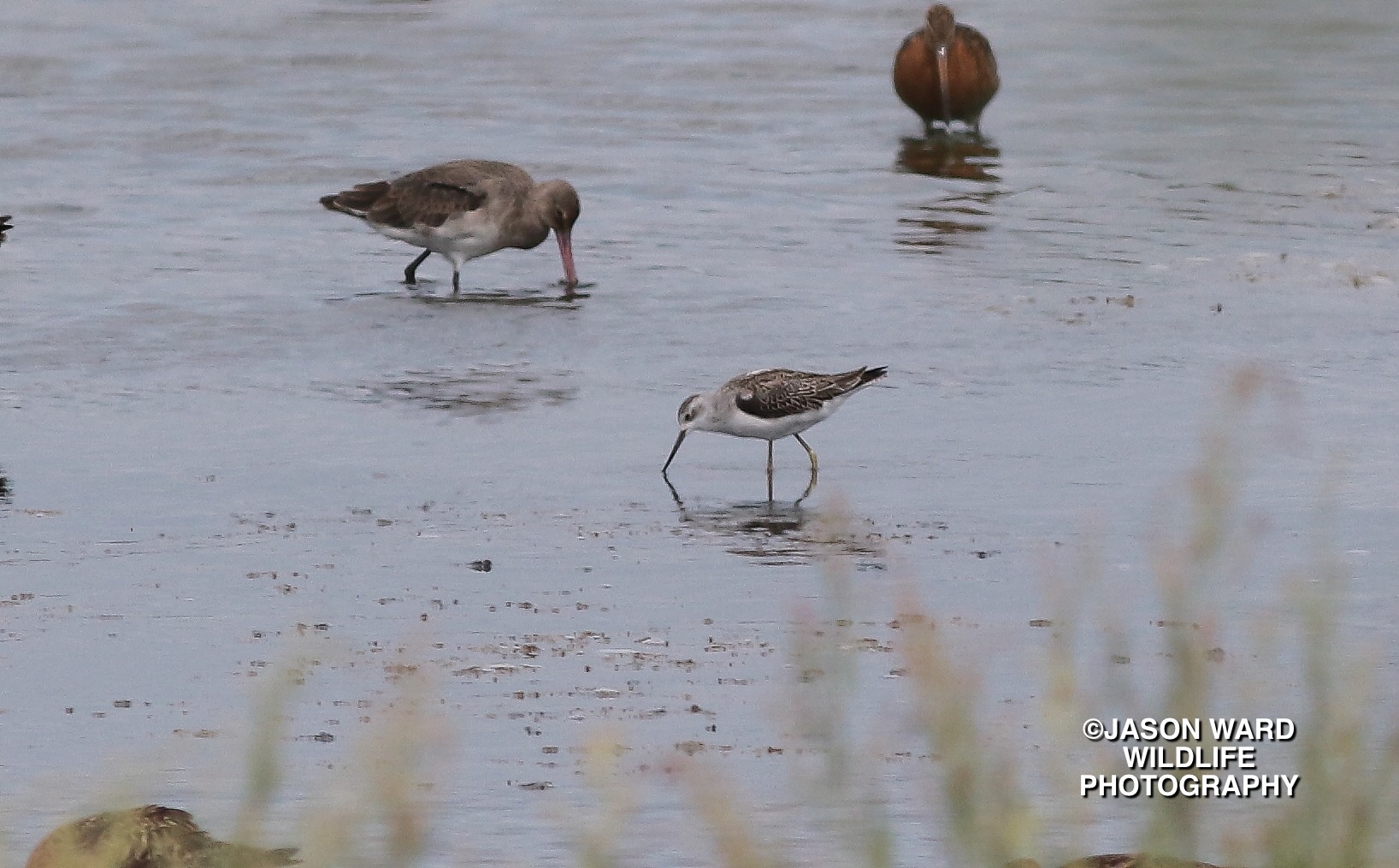 On Shetland, an immature Two-barred Crossbill at Baltasound, Unst, on 21st was joined by a juvenile four days later. Two then became three: the pair being joined by an 1st-summer female on 27th. Two males were at Marrister, Whalsay, on 29th, with Shetland also hosting singles on Fair Isle, Lerwick, and a dead juvenile on Fetlar. An adult female on Isle of May from 24-29th proved slightly more accessible. The likelihood of more through August and beyond seems likely. The last big irruption year was 2008 and the sheer volume of records from recent weeks in Norway suggests we may be in line for another.

All three nests of Nottinghamshire’s Europe Bee-eaters have now hatched, bringing up the total to a minimum of 10 birds. Nests usually contain anywhere from four to nine chicks, making a cheery 34 possible, if unlikely. They continue to attract visitors, with more than 11,000 having been to see them so far. Providing more southern European flavour were a Hoopoe near Crianlarich, Forth, on 21-23rd and Lothian’s Greater Short-toed Lark remaining till 24th. East Yorkshire was responsible for all the period’s Red-backed Shrike records: a female at Kilnsea from 25-29th being followed by another female at Filey from 26th. Capable of attracting birds in all months of the year, Fair Isle played host to an adult Rosy Starling from 24-28th, with one still present throughout by a caravan site near Embo in the Highlands. More of a surprise was an unseasonal Paddyfield Warbler at Hobbister on mainland Orkney, belatedly identified via Facebook from 6 July. A Marsh Warbler was trapped and ringed at Minsmere, Suffolk, on 20th. 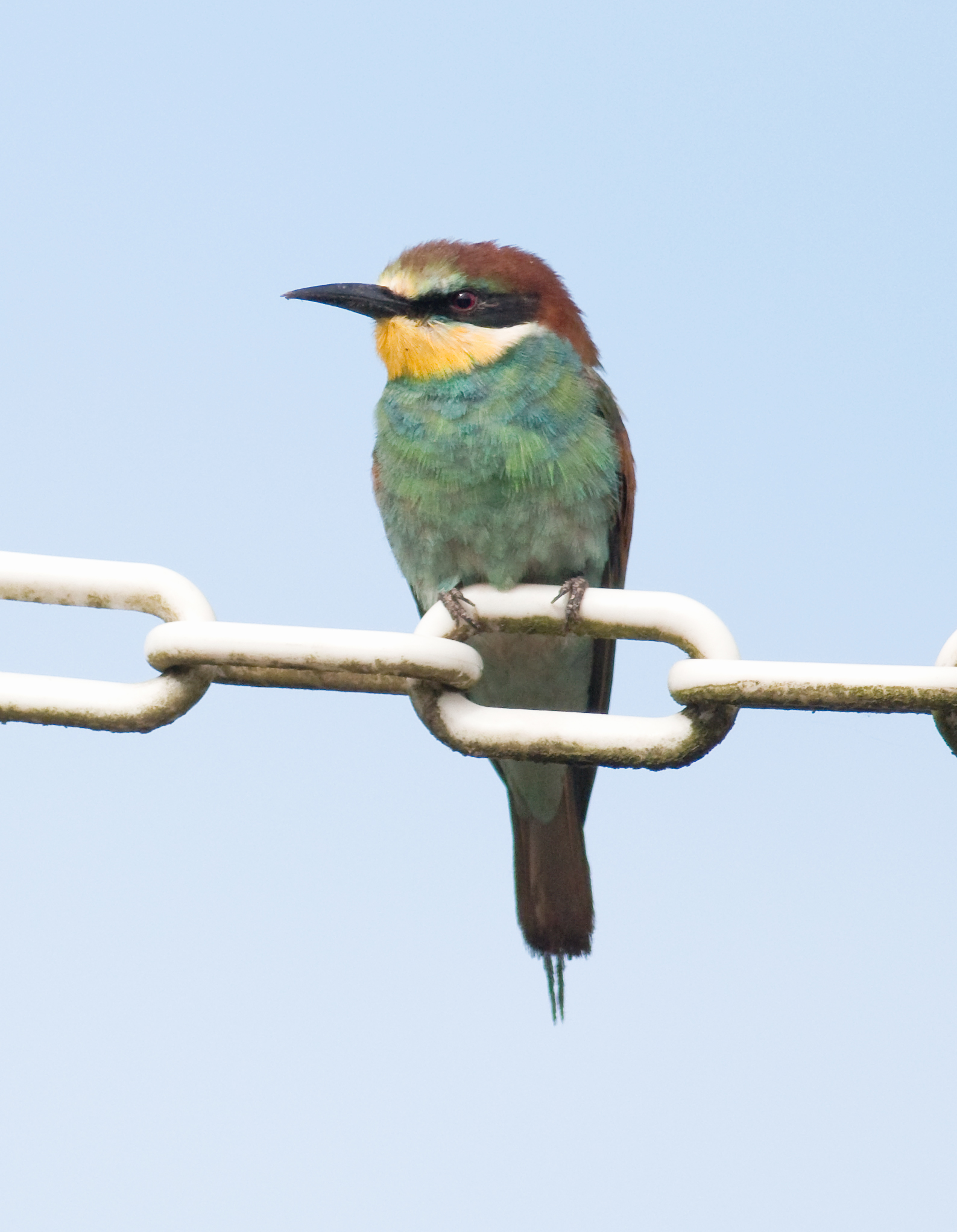 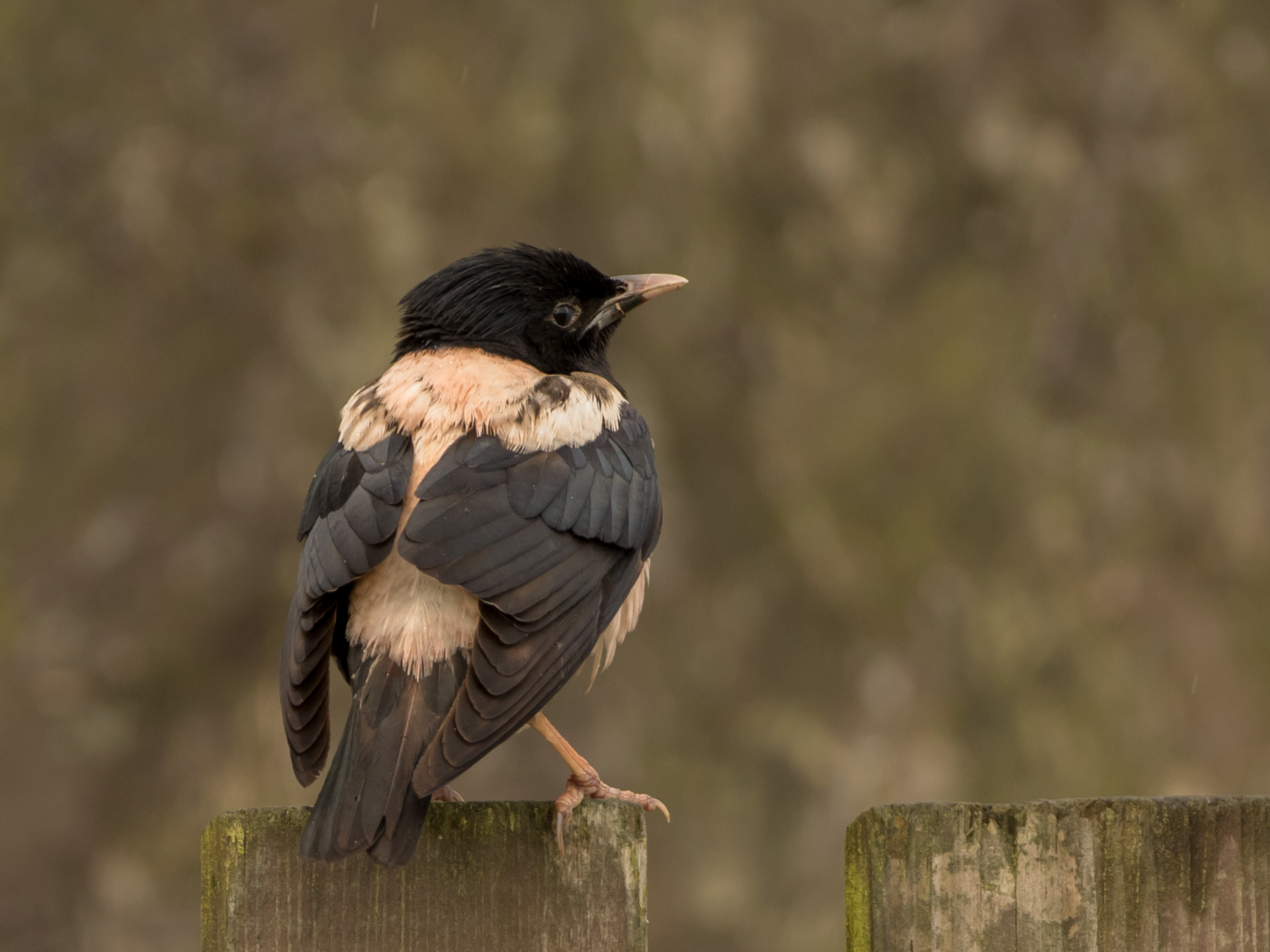 The Iberian Peninsula hosted a brief South Polar Skua off Estaca de Bares, Spain, on 22nd, as well as a Brown Booby at Berlengas, Portugal, on 19th. A pair of Elegant Terns were still at L'Albufera de València, Spain. Elsewhere, Britain’s widely twitched individual was still near Calais, France, on 21st.

In the Azores, the Grey-tailed Tattler was seen intermittently on Terceira until 24th, with a Solitary Sandpiper on São Miguel on 31st. On the Israeli-Syrian border, what was presumably the long-staying Bateleur was seen on 26th. Late news of Iceland’s first Caspian Tern surfaced; at Siglufjörður on 11th. A Grey Phalarope in Azerbaijan on 15th was the country’s second; a Little Swift in Sardinia, Italy, on 26th was the country’s fifth. 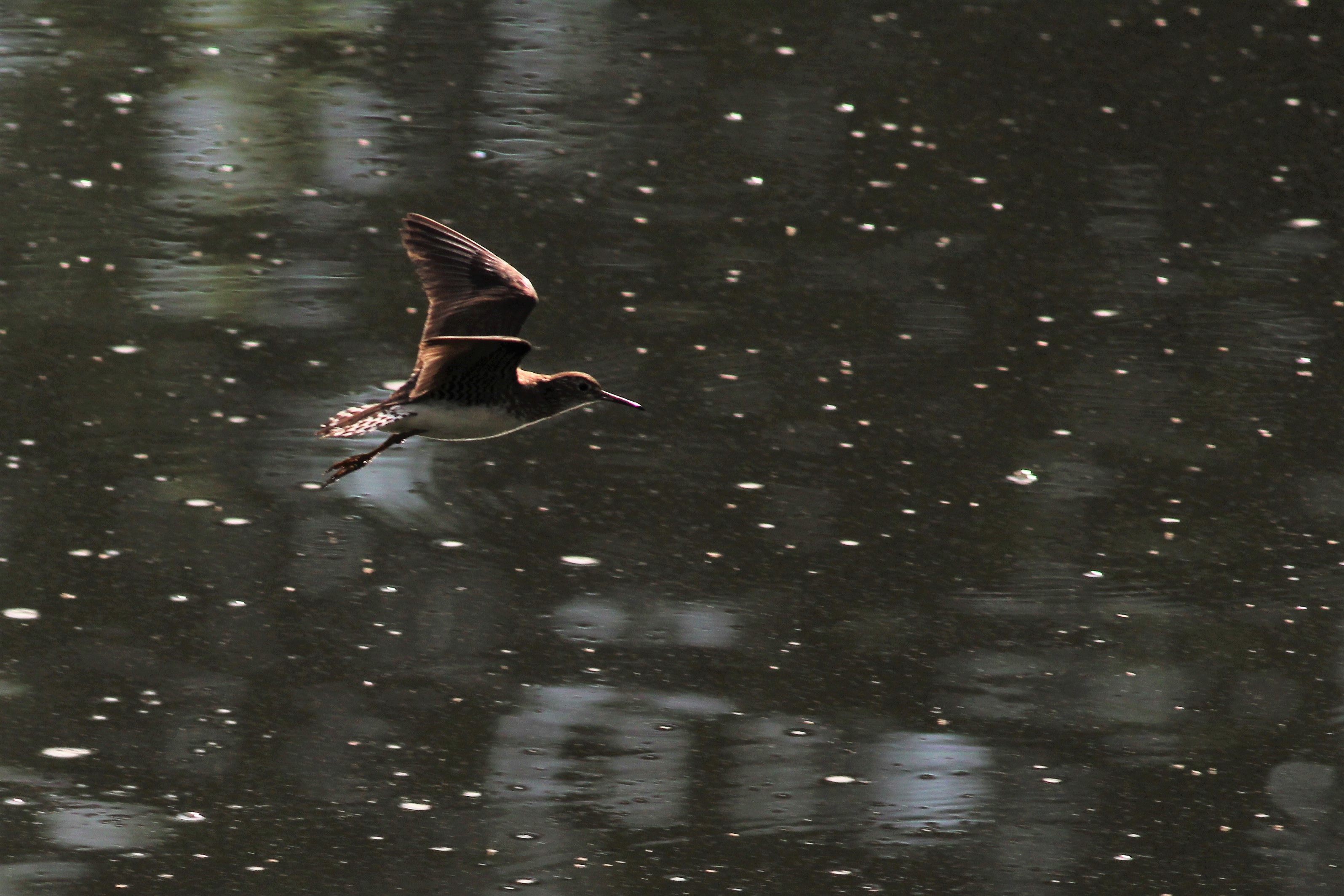 A sub-adult Black-browed Albatross in the Bay of Biscay off Loctudy, Finistère, France, on 23rd was perhaps the same as that seen from the Hull-Zeebrugge ferry on 16th. Late news of one off Franz Josef Land, Russia, on 14th was potentially the German adult – which would explain its longer-than-usual absence. It was back on its usual territory of Sylt from 24th. More startling was the first breeding record of a pair of Spectacled Warblers – still a major national rarity – fledging no fewer than five young in the Eifel National Park. Sticking with Germany, a Pallas’s Gull was in Mecklenburg-Vorpommen on 24th. With the aforementioned widely anticipated as a modern British first, the Channel Island’s American Royal Tern would also be popular, and was still on Alderney on the same date.