Despite the often warm and sunny weather, birding in spring 2022 has had a real lethargy to it for long periods. By all accounts, poor conditions across Iberia have been holding birds up somewhat, with many birders noting the lack of regular summer migrants so far this April, from hirundines to shorebirds. The feeling was that something had to give – and give it did this week, with migration really starting to hit top gear and birders right across these isles profiting from the 'hot' spell.

The first signs began to show along the south coast on 21st, when Bar-tailed Godwit numbers were on the move in particular – including tallies of 841 past Beachy Head, East Sussex, and 2,491 past Dungeness, Kent. Improvements in both number and diversity were then noted along the Severn Estuary on 22nd, with a count of 12 Black Terns at Severn Beach, Gloucestershire, notable in a spring that has so far produced barely any of these ever-popular birds (though it is still early, of course). 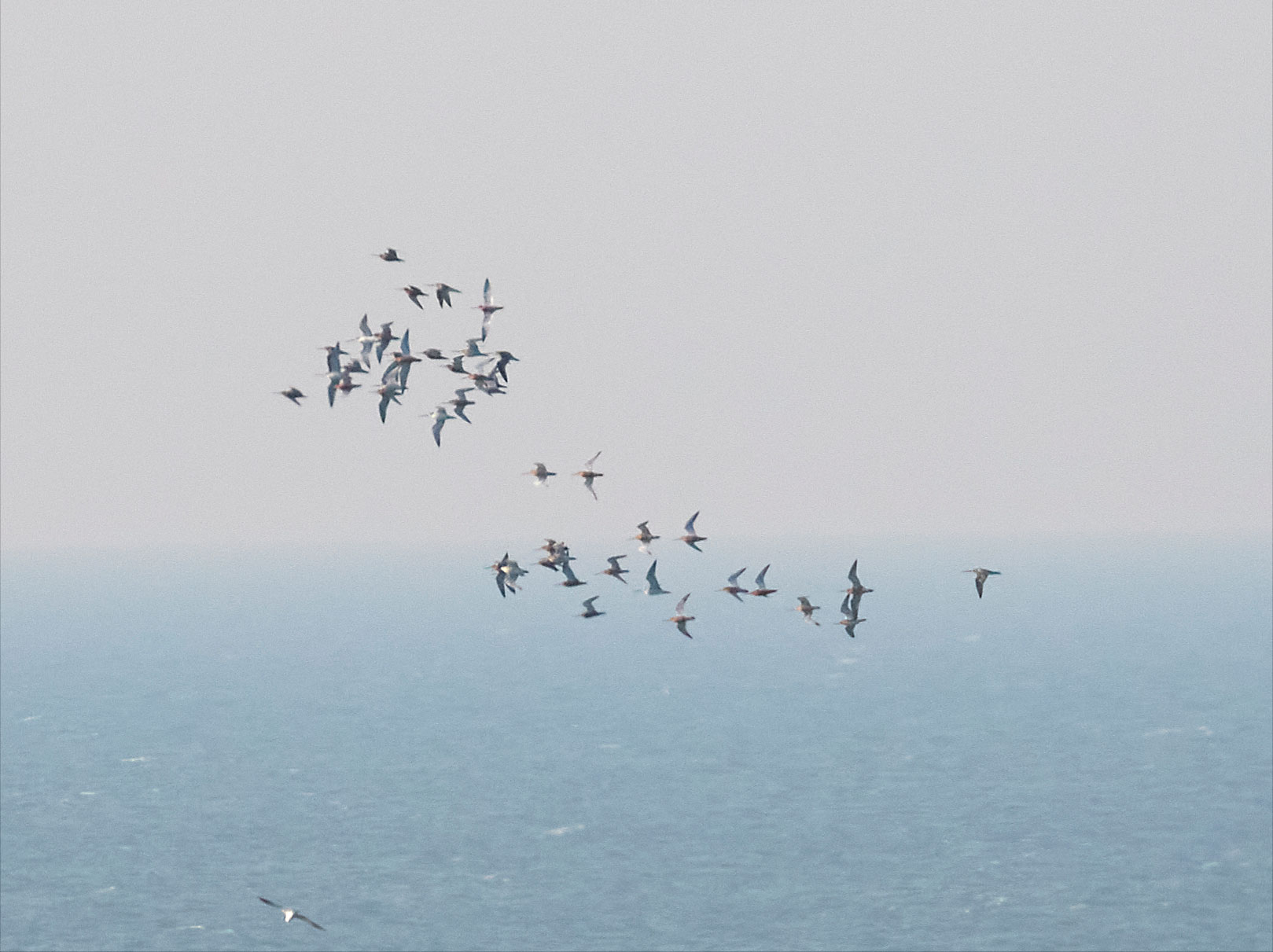 With a brisk north-easterly wind kicking up over the weekend, passage really started to begin in earnest across inland counties, with a very pronounced movement of waders – particularly Bar-tailed Godwit and Whimbrel, but with smaller numbers of Grey Plover, Sanderling and Spotted Redshank, among others – getting underway from 23rd. That day also saw comfortably the biggest push of Little Gulls so far this spring, with many double-figure flocks noted across the Midlands, including 32+ at Summer Leys NR, Northants.

Associated with this was a slightly improved showing of seasonal scarcities, with no fewer than 12 Red-rumped Swallows appearing between Cornwall (three) and Spurn, these including apparently migrating birds at Grafham Water, Cambs, and Severn Beach, Glos, on 22nd, as well as two in Suffolk. Hoopoe also broke into double figures across Britain, with one as far north as Eigg, Highland, on 20th and another twitchable at Weeting Heeth NWT, Norfolk, from 23rd, while Ireland only managed two – and, unusually for this species, both were together at Myross, Co Cork, from 20th. Cork also hosted one of the week's two Alpine Swifts, with one briefly over Ladysbridge on 19th. Another zoomed over Skokholm, Pembs, on 22nd. The first Golden Oriole of 2022 was heard at St Blazey, Cornwall, on 24th.

Four Purple Herons were noted, with a flyover at Marazion, Cornwall, on 20th preceding the arrival of an immature on St Mary's, Scilly, on 23rd, with further flyovers at Minster Marshes, Kent, and Edgefield, Norfolk, on 20th. There was once again a glut of White Stork records across England, with unringed birds at Welney WWT, Norfolk, from 20th – this the bird seen last week at Berry Fen and Eldernell, Cambs – and Swarthmoor, Cumbria, on 23rd. 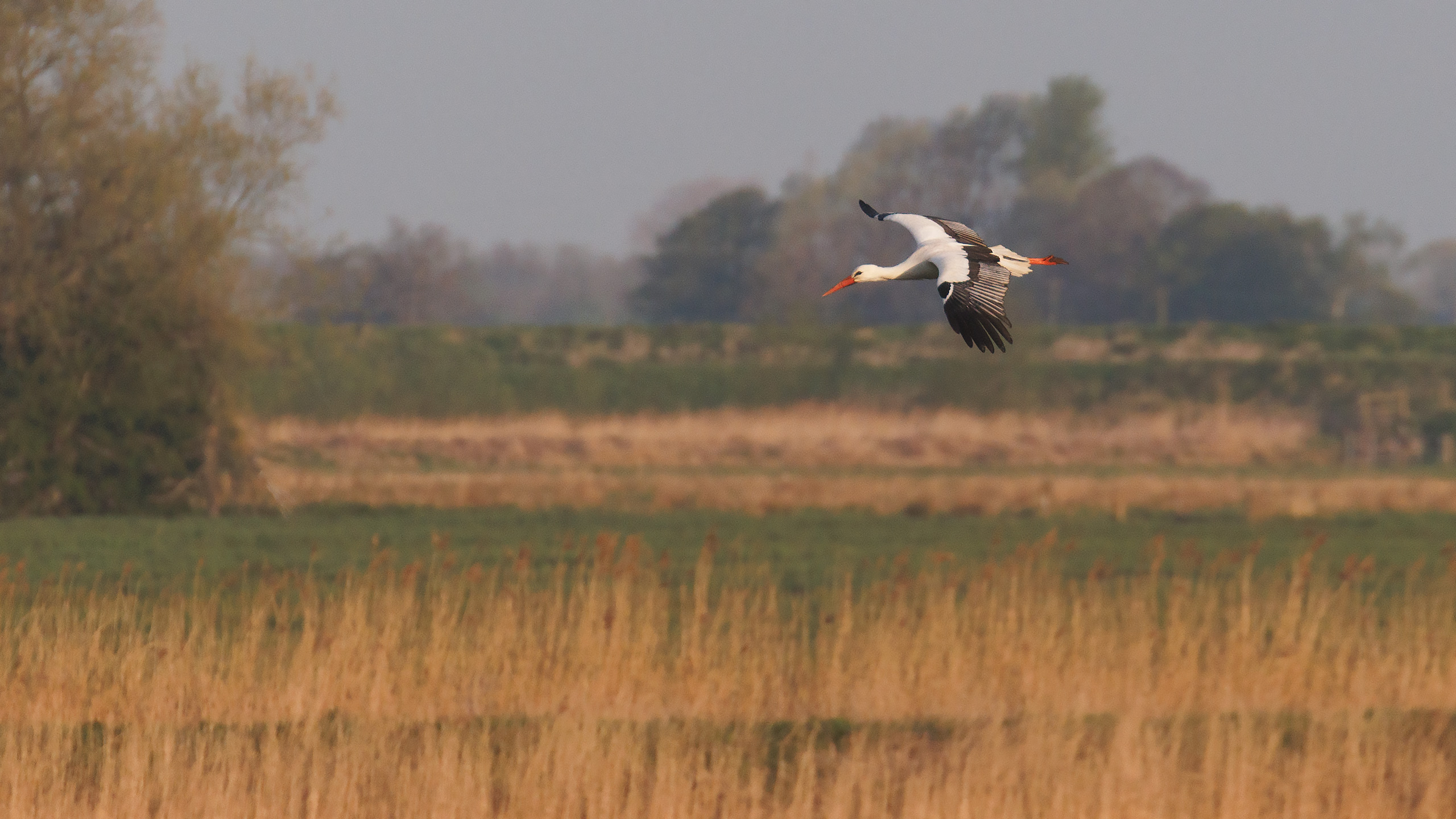 New rarities were fairly few and far between. The most eye-catching report concerned a non-stopping Great Spotted Cuckoo flying through at a local nature reserve on the outskirts of Darlington, Durham, on 22nd – a very rare record of this species away from southern counties. After the ringed bird on Fair Isle last week (still present alongside an unringed bird), which transpired to have been banded in northern Norway in late September 2021, Shetland scored a third Hornemann's Arctic Redpoll on 23rd – this one unringed and on Unst. Cardiff Bay continued its extraordinary run of Bonaparte's Gulls, with yet another appearing there on 23rd – this time an adult. Meanwhile, at least two others remained at large in Co Wexford, between Tacumshin and South Slob, while the Irish Ross's Gull was again near Mutton Island on 23rd. On the south coast, a male Kentish Plover at Camber Sands, East Sussex, from 22nd felt like a pretty classic occurrence in terms of date and location of this all-too-rare Continental migrant.

The Black-browed Albatross was back at Bempton on a near-daily basis after its hiatus over the Easter weekend, and the Eurasian Crag Martin still on Bryher, Scilly, to 21st, but not thereafter. Access to the Belted Kingfisher 'viewing field' has now been withdrawn as the farmer has put his cattle in there; by coincidence, the kingfisher wasn't seen beyond 19th, with a five-hour search on 20th proving fruitless. Meanwhile, the Black-winged Kite reported as photographed on a lamppost in Cleveleys, Lancashire, was quickly rumbled as a hoax and the wait for this overdue addition to the British list goes on. The pair of Lesser Scaup was last seen at Tucklesholme Quarry, Staffs, on 21st, while the male continued at Chew Valley Lake, Somerset, throughout. Ring-necked Duck were still on show at 22 sites across Britain and Ireland. With new birds including a female at Leighton Moss RSPB, Lancs, on 19th and a male at Attenborough NR, Notts, on 19-20th, one would expect yet more to pop up nationally in the next few weeks (and perhaps a Lesser Scaup or two, too).

Other lingering wildfowl included two (or three) Blue-winged Teal, with the male at Tacumshin, Co Wexford, and female at Berry Fen, Cambridgeshire, complemented by the 'possible' (but more probably Cinnamon Teal) still near Marlow, Bucks. Tacumshin also had one of four Green-winged Teal this week, a total that also included a male at Seaton, Devon, that was labelled in some quarters as a hybrid. Two American Wigeon included a male in Northumberland which visited East Chevington and Cresswell Pond, plus another still in Moray. Surf Scoter lingered in Moray, Lothian and the Isles of Scilly, with King Eider still in Highland and Lothian.

An adult Lesser White-fronted Goose among Pink-footed Geese at Udale Bay, Highland, from 22nd was greeted with initial excitement, but proved (on belly pattern) to be the regular bird seen previously in Lancashire and North Yorkshire, which has been deemed worthy of Category E by the BBRC. Also still hanging around were the Red-breasted Goose at Blakeney Harbour, Norfolk, and the Todd's Canada and Snow Geese in Lancashire. In Suffolk, the Pacific Golden Plover remained at Carlton Marshes SWT throughout the week, but its European Golden Plover cohort is dwindling fast and this rarity will presumably move on very soon. Suffolk also held on to its Lesser Yellowlegs at Minsmere RSPB, with Irish birds still in Co Wexford and Co Cork. Five Eurasian Dotterel at Baleshare, North Uist, from 23rd was a nice record for the Outer Hebrides, with up to three at the classic 'tripping' location of Thornham, Norfolk, from midweek. Eight dropped in at Danby Beacon, North Yorkshire, on 20th, with one briefly there on 24th. A male was popular at Long Mynd, Shropshire, on 24th, while there were further brief sightings in Devon and Carmarthen.

A slightly surreal 'fall' of Black-winged Stilts in Berkshire saw three appear in close proximity on 19th: a single bird was at Hosehill Lake LNR for the day, with a pair at nearby Fobney Meadow to 20th. Elsewhere, two were near Denver Sluice, Norfolk, and last week's find at Marshside RSPB, Lancashire, lingered throughout. Lingering Temminck's Stints were at Titchwell RSPB, Norfolk, and East Tilbury, Essex, with possibly the first true migrant of the year at Loch of Strathbeg RSPB, Aberdeenshire, on 24th. Black Kites were again prominent on the BirdGuides news page, with the raptor reported at up to 20 sites. Several birds were noted between Spurn, East Yorkshire, and Cornwall, with individuals multi-observed in Dorset and Kent. Notable outliers were birds photographed at Sandbach Flashes, Cheshire, and Lissagriffin, Co Cork, on 21st. In Orkney, the male Snowy Owl was noted again on Eday.

A Spotted Crake performed for a day at Letham Pools, Fife, on 20th. The Pied-billed Grebe was noted again at Loch Feorlin, Argyll, this week, while eight sites produced White-billed Divers – arguably the most notable of which was one off Melmore Head, Co Donegal, on 20th. Two Shetland localities held the species, with one again off Papa Westray, Orkney. It was of course the Moray Firth which proved the hotbed for sightings, with a peak of seven off Portsoy, Aberdeenshire, on 19th.

Other bits and pieces this week included a new Greater Short-toed Lark at Nanquidno, Cornwall, on 21-22nd, with the Fair Isle bird still there on 24th, as well as the fourth Shore Lark for Skokholm, Pembs, on 23-24th. Wrynecks were on Tresco, Scilly, on 21st and at Donna Nook, Lincs, on 24th. Surprisingly, the Dusky Warbler lingered on at Stiffkey Fen, Norfolk, throughout, while no fewer than three Little Buntings were picked up (in East Sussex, North Yorkshire and Aberdeenshire). In the Azores, an adult Yellow-crowned Night Heron was a new discovery over the weekend in Ponta Delgada harbour, São Miguel. It's remarkable to think that the first regional record was as recently as 2011, for this now seems a semi-expected (if nonetheless very rare) visitor to the mid-Atlantic – a British record will surely happen someday.

Meanwhile, in western France, an Elegant Tern returned to Noirmoutier Island on 21st. Perhaps they will breed successfully again this summer. Gripping finds just across the sea in The Netherlands included an Alpine Accentor at Zuid Kennemerland NP on 19th and a Calandra Lark at Egmond aan Zee on 21st. A Saker Falcon spent three days at Skagen, Denmark, to 23rd.

Major news from Egypt concerned an immature Bateleur photographed on the Red Sea coast at Gabal el Zayt on 18th. Southern Turkey's great potential for rarity finding was once again highlighted this week, when the hot-spot of Milleyha produced a national first (Temminck's Lark) and second (Egyptian Nightjar), plus no fewer than five Greater Hoopoe-Larks and two Bar-tailed Larks. Malta also helped itself to some North African vagrants, with news breaking of an Egyptian Nightjar seen on 18th, plus an Eyebrowed Thrush on Comino on 19th. Italy's sixth Bar-tailed Lark was on nearby Linosa on 19th, with another of that species in the far north-east of Cyprus.

Other notable records included the first Audouin's Gull for Austria at Kirchbichl on 19th, Latvia's second Stejneger's Scoter off Oviši on 19th, late news of a Pied Crow in Ceuta, Greater Sand Plovers in Spain and Portugal, plus the Black-and-white Warbler still in Catalonia.