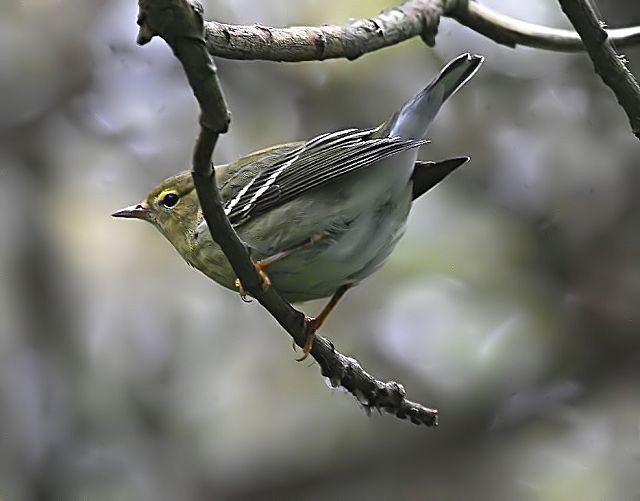 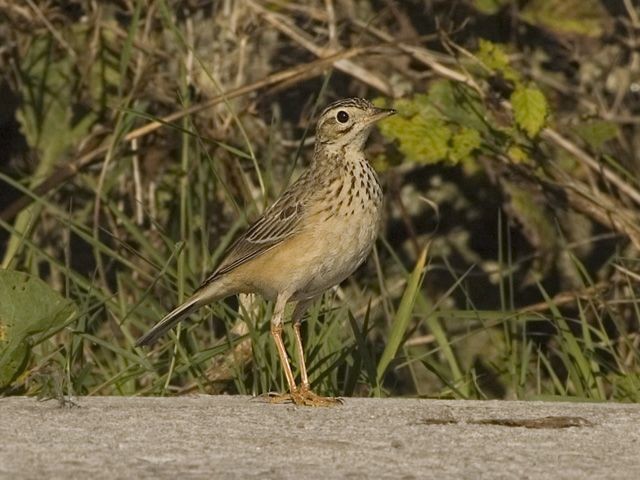 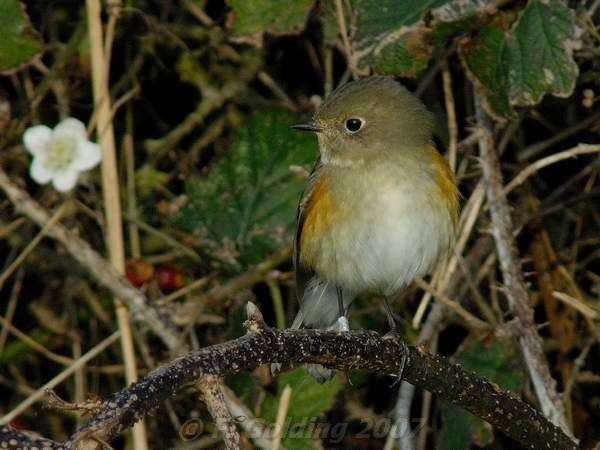 Although the flow of rarities was stemmed somewhat this week, there were still gems to be found. Pride of place must go to the first-winter male Rose-breasted Grosbeak found on St. Agnes (Scilly) on 23rd and still present at the time of writing. Elsewhere in the archipelago, a second Blackpoll Warbler was confirmed on St. Mary's after the earlier speculation. The putative Wilson's Snipe remained throughout on St. Mary's, becoming more predictable and photogenic which should help its chances with the powers that be. There was also the possibility of a second bird present in the same area on the 21st. The Blyth's Pipit was still on Tresco to at least the 22nd and the Grey-cheeked Thrush on St. Mary's to at least the same date. Away from Scilly but still in the extreme southwest, another Blyth's Pipit was found at Sennen (Cornwall) from 20th-23rd. On the east coast a relatively long-staying Red-flanked Bluetail at Flamborough Head (East Yorks) from 20th-23rd proved very popular but a Pechora Pipit evaded the crowds by putting in just a brief appearance at Robin Hood's Bay (North Yorks) on 24th. Yet another Buff-bellied Pipit was found, this time at Liniclate, Benbecula (Outer Hebrides) on the 18th, in what is an amazing autumn for the species. On Shetland the long-staying Killdeer entered its 29th week of residence.

At least four and possibly five Cattle Egrets were seen in the south of the country up to the 23rd with two birds at Grove Ferry (Kent) on the 19th. There were still around 10 Great White Egrets reported throughout the country with two seen together at several sites in Suffolk and Norfolk. A juvenile Little Bittern was a surprise find at Titchwell RSPB (Norfolk) on 19th-20th. The juvenile Purple Heron was still at Meare Heath (Somerset) to the 23rd and the long-staying Glossy Ibis remained at Marshside Marsh RSPB (Lancashire) all week. Except for a single bird at the National Wetlands Centre (Carmarthen) on the 22nd, all Spoonbill records came from the south and southwest coasts with a maximum of 26 at Brownsea Island (Dorset) on 20th. 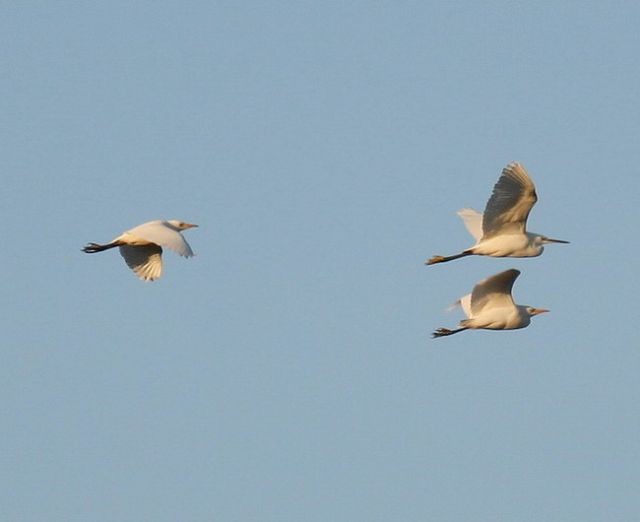 Wildfowl numbers began to increase and brought with them the usual suspects. Two adult Ross's Geese were seen in Angus & Dundee, Perth/Kinross and Lothian with one or possibly two birds in Norfolk. Snow Geese were reported from Norfolk, Fife and Lothian and a Lesser White-fronted Goose of unknown origin was with White-fronted Geese at Holkham (Norfolk) on 24th. Single Black Brants were reported from Norfolk, Essex, Dorset and County Down while four presumed vagrant Canada Geese were on Islay (Argyll) on the 24th, with another in Dumfries and Galloway on 22nd-23rd. An adult female Blue-winged Teal found at Bull Island (Dublin) on 21st may be the returning bird from last winter. The drake Lesser Scaup was still at Blagdon Lake (Somerset) to 23rd with other drakes at Stourton (Wiltshire) on 20th-21st and Lough Fern (Donegal) on the 21st. Single Ring-necked Ducks were reported from Somerset, Shetland and Cork with two in Donegal. The Green-winged Teal remained at Inner Marsh Farm RSPB (Cheshire) to at least the 19th with another briefly at Siddick Ponds NR (Cumbria) on 21st. Just four Surf Scoters were reported, all from the north and west in Aberdeenshire, Fife, Orkney and Donegal. 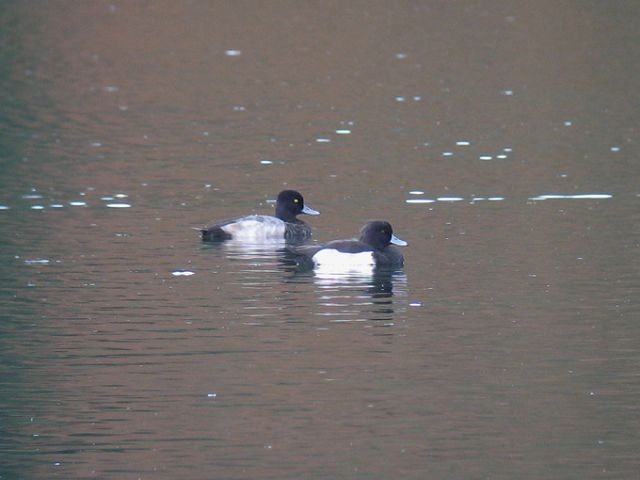 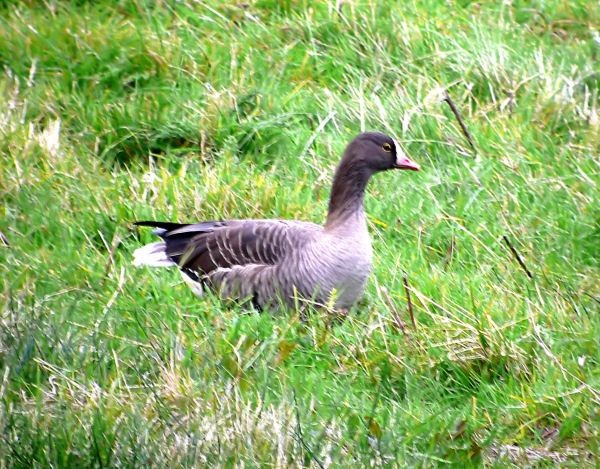 The Black Kite could still be found at Nocton Heath (Lincolnshire) throughout the week with another over the Walmsley Sanctuary (Cornwall) on 18th. The Rough-legged Buzzard remained on Foula (Shetland) to at least the 18th whilst a mini-influx on the east coast produced records from Cleveland, North Yorkshire, East Yorkshire, Suffolk and Kent. A late Honey Buzzard was reported over Clifton (Somerset) on 23rd.

Spotted Crakes were reported again from Marazion (Cornwall) and Great Pool, Tresco (Scilly) and three Great Bustards from the Salisbury Plain release scheme were still at Kennard Moor (Somerset) on 19th. At least 9 American Golden Plover were scattered between the Outer Hebrides, Cornwall and Aberdeenshire with an inland bird at Maxey GPs (Cambridge) on 21st-22nd. A juvenile Spotted Sandpiper showed well commuting between Llanishen Reservoir and Lisvane Reservoir (Glamorgan) from 20th-23rd, whilst elsewhere in Wales the Semipalmated Sandpiper was still on the Gann Estuary to at least 23rd. The juvenile White-rumped Sandpiper remained on Shetland til at least the 22nd as did a juvenile Buff-breasted Sandpiper from 18th-21st. What was presumably last year's returning adult Long-billed Dowitcher reappeared at Dundalk Docks (Louth) on 17th with other juveniles seen at Lough Beg (Londonderry) on 23rd and Bowling Green RSPB (Devon) from 24th. Just four Pectoral Sandpipers were reported, two at Tacumshin (Wexford) on 20th and singles in North Yorkshire and Highland. A juvenile Collared Pratincole was reported west of Galway (Galway) on 24th and a total of 11 Grey Phalaropes were seen between Orkney and Scilly. 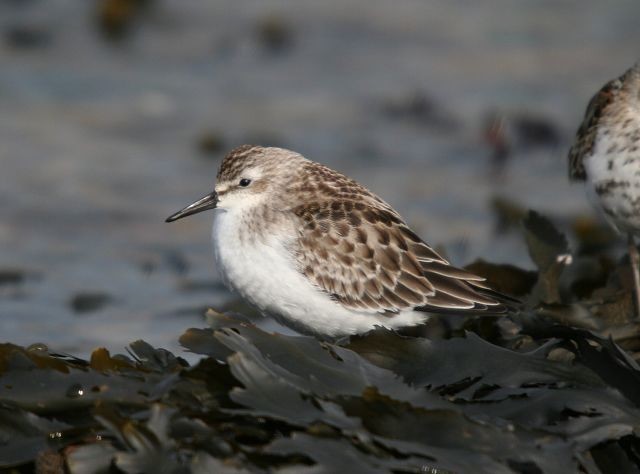 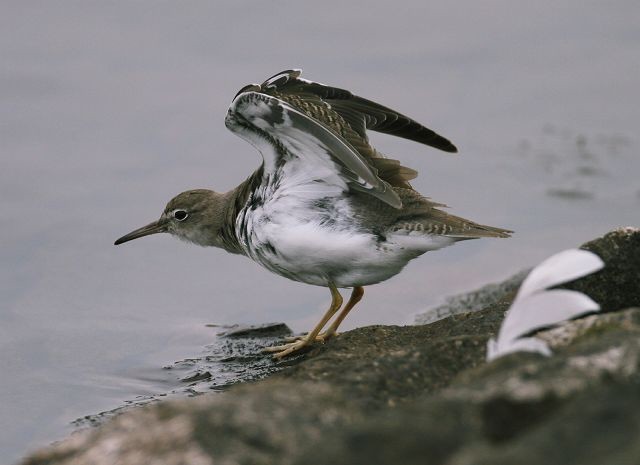 Five Ring-billed Gulls were reported including the returning adult back at Gosport (Hampshire) from 21st and the regular adult at Westcliff-on-Sea (Essex) throughout. The elusive 2nd-winter Laughing Gull reappeared briefly at Countess Weir (Devon) on 23rd and an adult Bonaparte's Gull was at Rattray Head (Aberdeenshire) briefly on 20th. Just two single juvenile Sabine's Gulls were reported from Dumfries and Galloway and Norfolk. There was a very mobile juvenile White-winged Black Tern around Loch of Skene (Aberdeenshire) from 21st.

Just one Hoopoe was reported from Marazion (Cornwall) on 19th and only two Wrynecks from Scilly and Norfolk. Short-toed Larks were in North Yorkshire, Cornwall and Scilly whilst a Red-rumped Swallow was reported west of Galway (Galway) on 24th. Around 40 Richard's Pipits were reported with the majority in the southwest, but inland birds were at Maxey GPs on 22nd and over Greywell (Hampshire) on 21st. Other rare pipits included a belated report of a Red-throated Pipit at Mizen Head (Cork) on 14th, Olive-backed Pipit at Sumburgh (Shetland) on 18th and Tawny Pipit at Abbot's Cliff (Kent) on 20th. An Isabelline Shrike was at Mizen Head (Cork) from 19th-21st and the Woodchat Shrike remained on St. Mary's (Scilly) to at least 19th. Just two Red-backed Shrikes were seen in East Yorkshire and Norfolk but it was an excellent week for Great Grey Shrikes with over 30 reported between Clyde, Devon and Kent. There was a belated report of a Desert Wheatear at Land's End (Cornwall) on 17th and single Bluethroats at Sandwich Bay (Kent) and Fair Isle (Shetland). 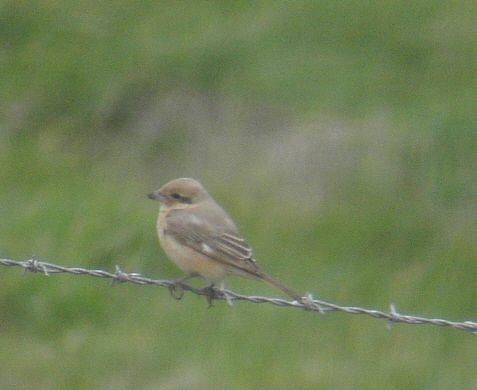 The Blyth's Reed Warbler was still on Bryher (Scilly) to 20th but elusive and the Icterine Warbler remained on Cape Clear (Cork) to the same date. Dusky Warblers were on Fair Isle to 23rd, in Cot Valley (Cornwall) from 22nd-24th and at Ballycotton (Cork) from 22nd-23rd. These were just outnumbered by four Radde's Warblers at Toab (Shetland), Old Head of Kinsale (Cork), St. Mary's (Scilly) and Church Cove (Cornwall). Around 30 Pallas's Warblers were reported between the Shetlands and Scilly with 2 at Hook Head (Wexford) on 23rd. The Hume's Leaf Warbler was at Holkham Pines on 19th and another in the Cot Valley (Cornwall) on 24th. Yellow-browed Warblers remained in good numbers with inland birds reported from Norfolk, London, Glamorgan and Hampshire. Once again the only Greenish Warbler present was the bird still at Dunnycove Bay (Cork) throughout the week. There were 10 widely scattered Barred Warblers reported and a single Subalpine Warbler on Fair Isle (Shetland) on 20th. 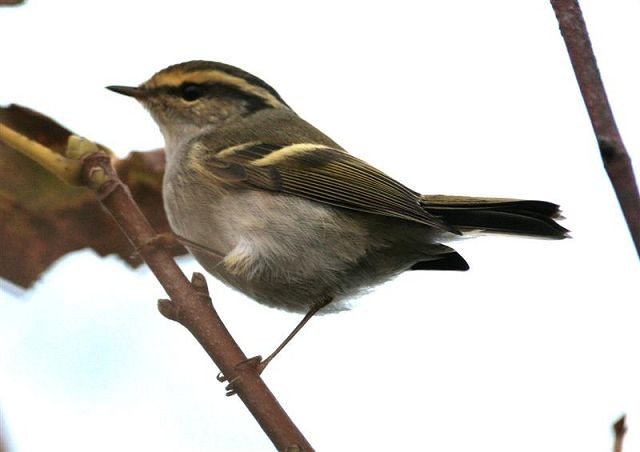 There were around 10 Red-breasted Flycatchers reported, again mainly from the southwest. Two Penduline Tits were at Rye Harbour NR (East Sussex) on 20th with another at Spurn (East Yorkshire) on the same day and one again on St. Mary's (Scilly) on 22nd. Single Little Buntings were seen on Scilly, Shetland, Outer Hebrides and in Argyll but just one Ortolan Bunting was reported, at Spurn (East Yorkshire) on 20th. There was a Rustic Bunting on St. Agnes (Scilly) on 22nd and Common Rosefinches were seen in Cheshire, Devon and Glamorgan. An Arctic Redpoll was on Bressay (Shetland) on 19th with another probable at Loch Druidibeg (Outer Hebrides) on 20th. The juvenile Rose-coloured Starling remained on Gugh (Scilly) throughout with another on Lundy (Devon) on 21st-22nd. 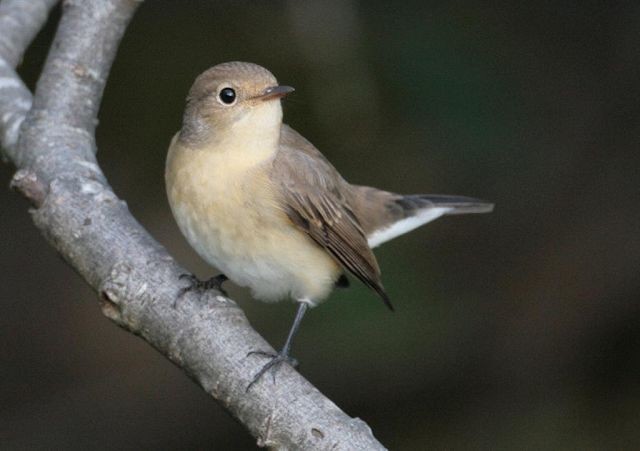 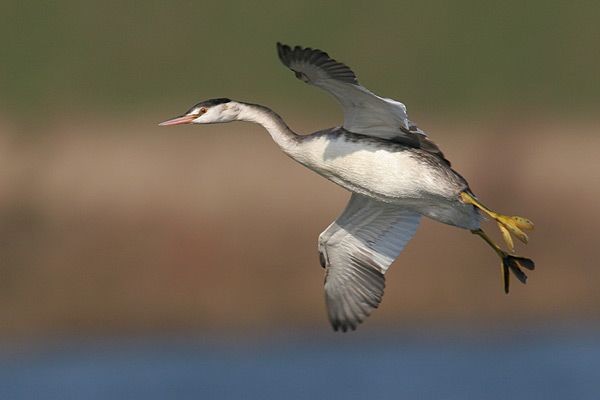 Great Crested Grebes are relatively easy to find and photograph on the water, but they are seldom seen in the air. To get a flight shot of one in good light, you could have to wait weeks for a decent opportunity. Ian Butler's image, with perfect lighting, pose, angle, focus and background is therefore quite special, and one which any bird photographer would be proud to have in his or her collection. 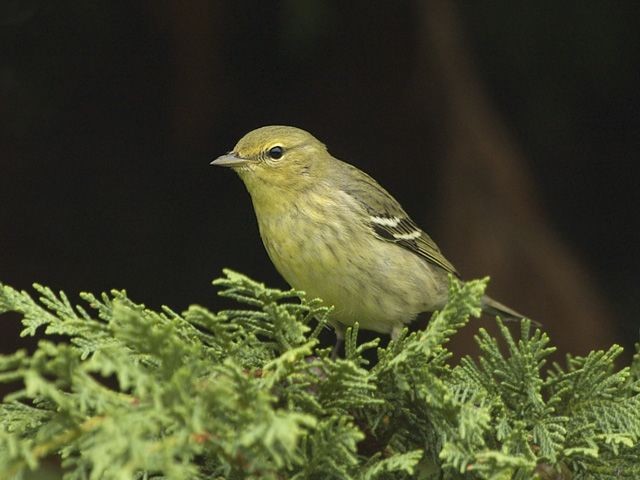 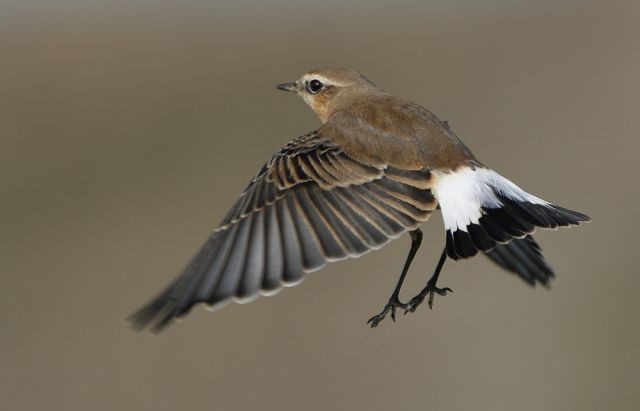 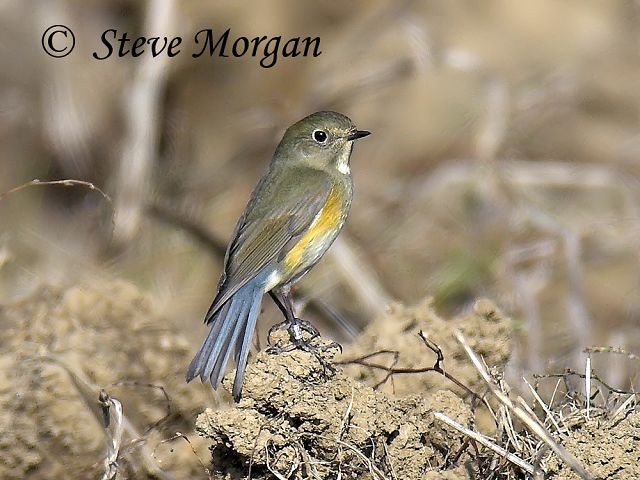 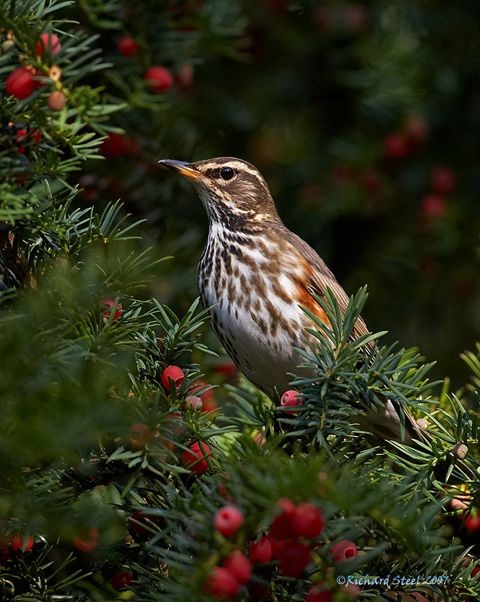 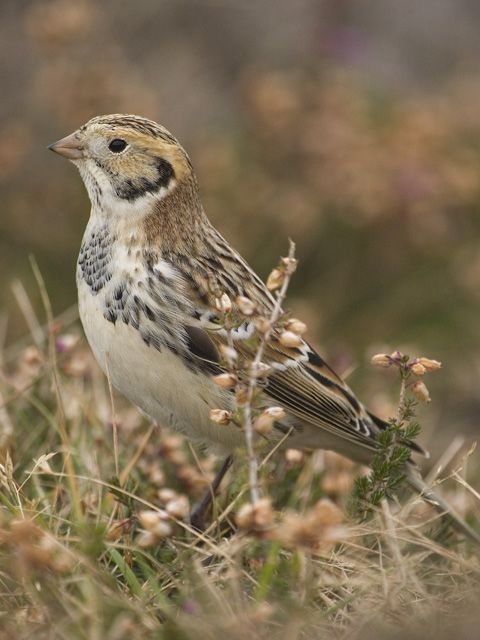 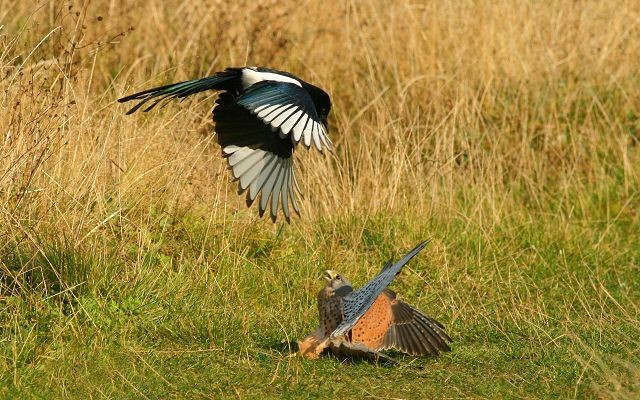 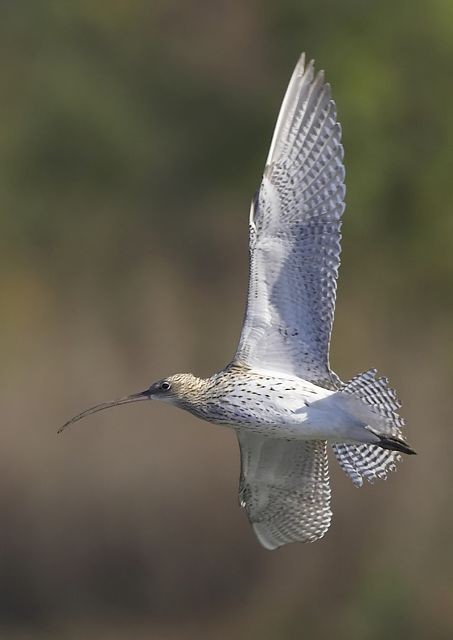 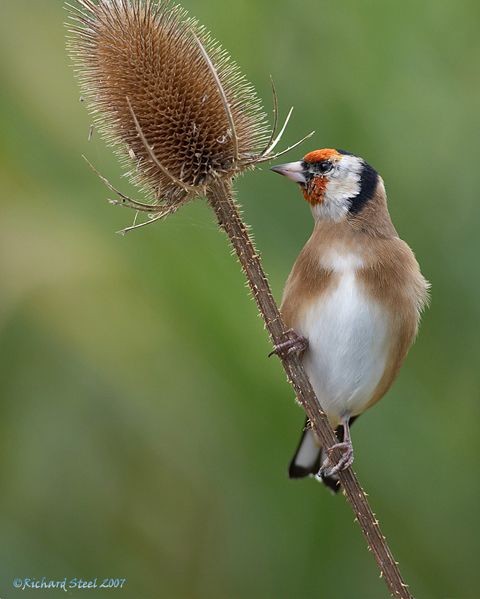 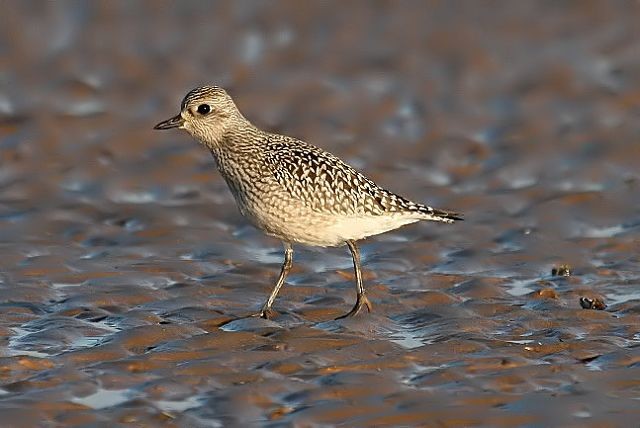 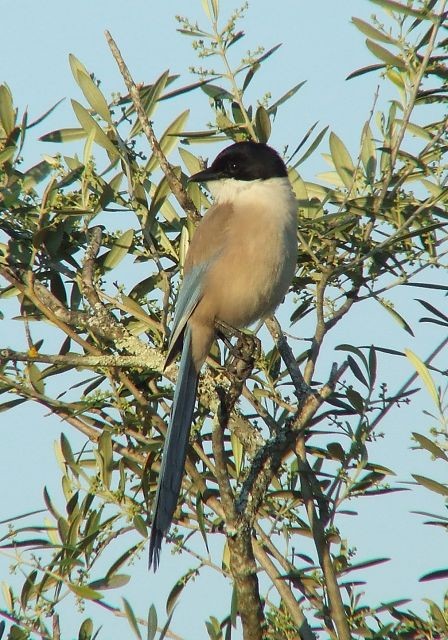