It seems appropriate to start with the weather this week, as once unthinkable temperatures swept across the UK – 40°C was reached for the first time in recorded history on these shores, and 46 weather stations broke the old national temperature record. Wildfires were headline news on Tuesday as well. A snapshot into the future?

The first rain for weeks arrived in parts of the North-West and Midlands on 22nd, resulting in an excellent arrival of inland Little Terns. A flock of 13 spent the day at Grafham Water, Cambridgeshire, while nine were at Fairburn Ings RSPB, West Yorkshire, and five at Whisby Nature Park, Lincolnshire. Black Terns also filtered through, alongside the first proper inland wader passage of the 'autumn'.

Although not the rarest bird on this week's roll call, a Ferruginous Duck in Warwickshire is certainly one of the more interesting records, as a report of a drake at Draycote Water on 23rd was quickly followed by full-frame photographs of a juvenile! This age-class at such an early date is rare, so for it to happen at the same site two years in a row is an incredible coincidence. Too much of a coincidence some may say … but I'll leave my tin hat off for now. 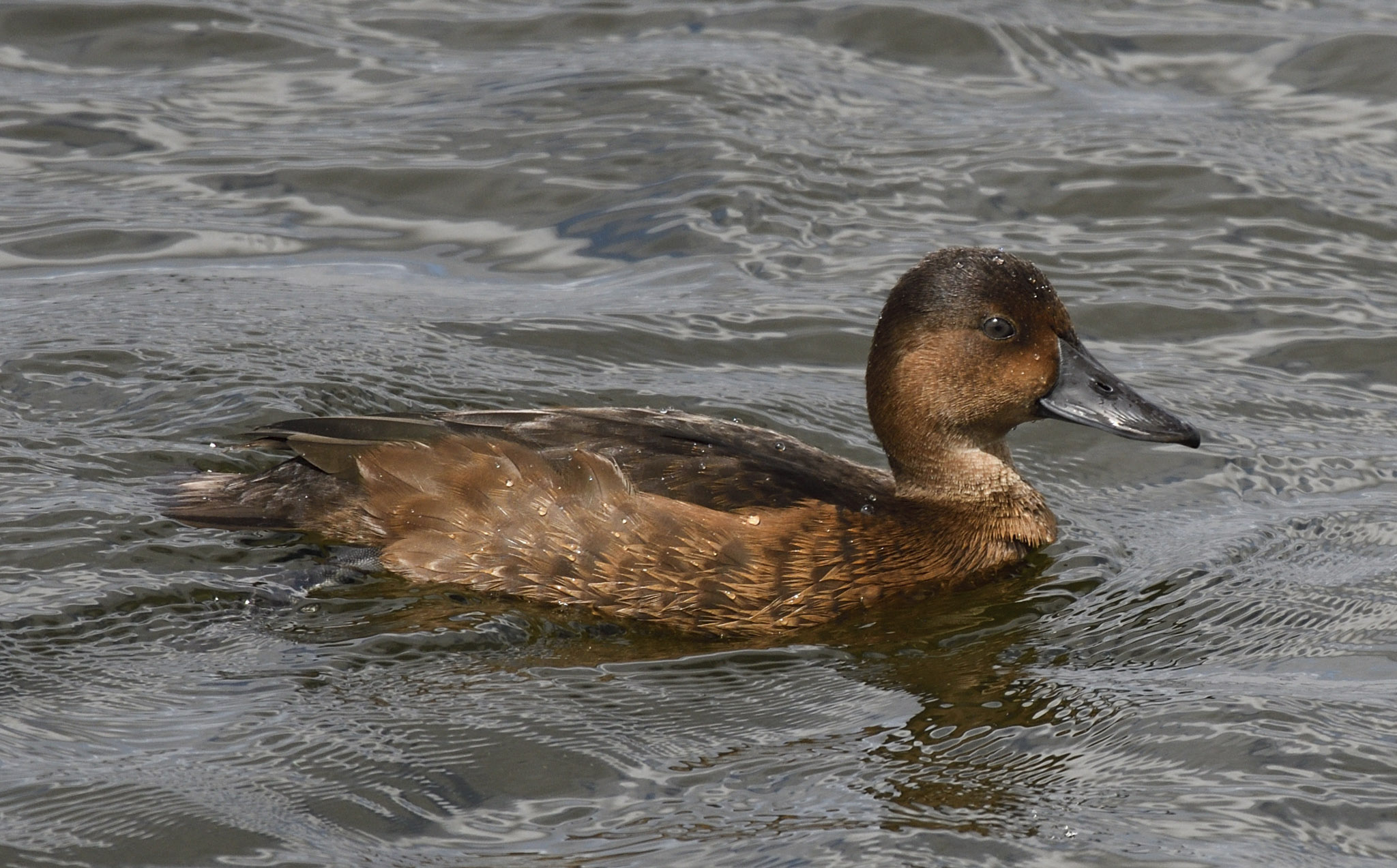 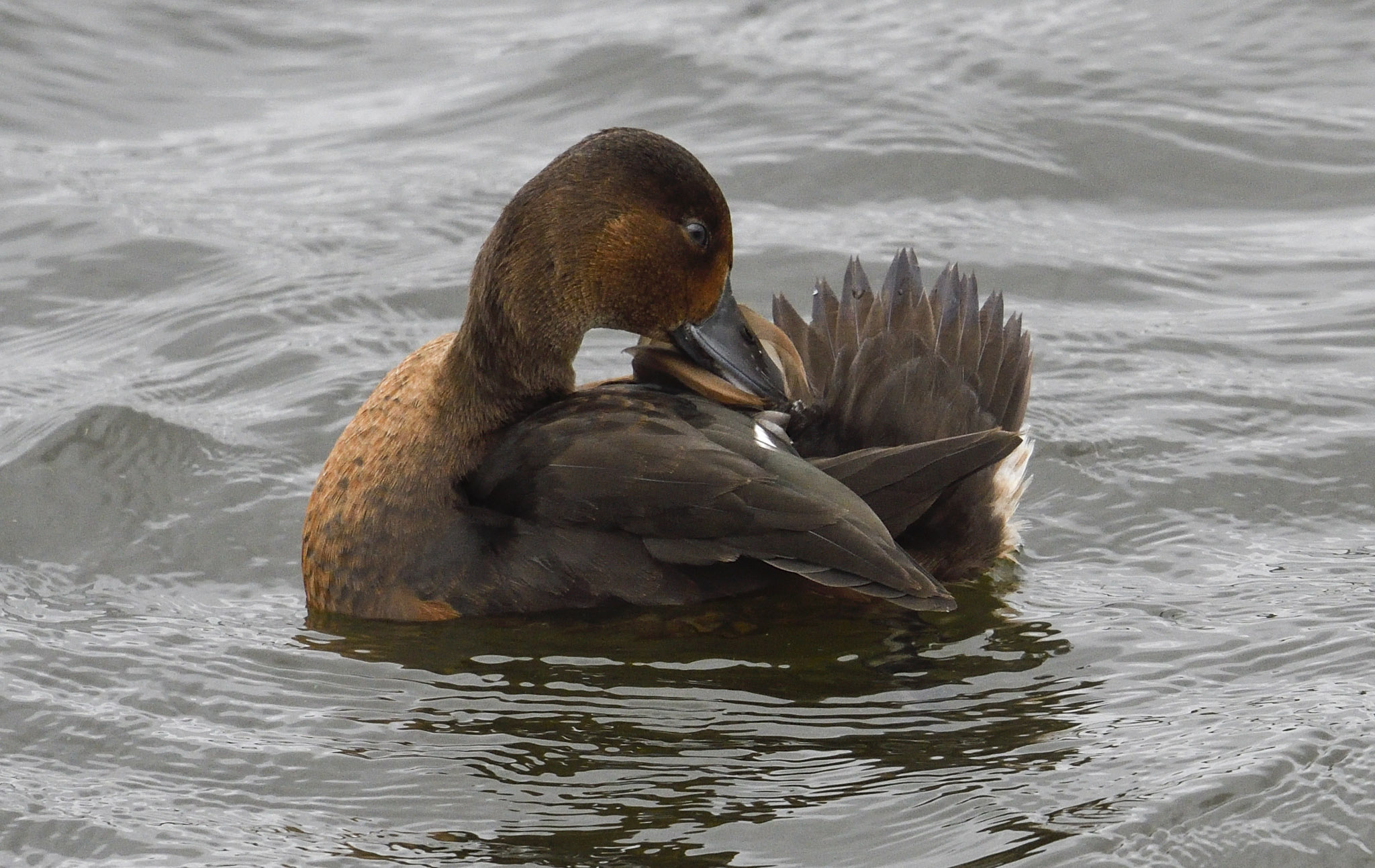 The overall freshness of the bird is the first indicator for age, plus a general dullness to the plumage in flat light. Structurally the bird may appear a little 'off' for a typical Ferruginous, but this is explainable by age. The bill still has some growing to do, as length is gained over the following couple of months after fledging, yet adult width and height are already reached. The tail feathers all have a neat notch out of the tip – typical of all juvenile duck – and the undertail is sullied with dark markings. The brightness in face and flanks hint this bird is a drake. Overall, it's a smart bird!

In other news, the returning Ferruginous Duck x Common Pochard hybrid is back at Foxcote Reservoir, Buckinghamshire.

Up at Flamborough Head, the male Red-tailed Shrike continues to show at Bempton Cliffs RSPB. The bird is looking sorrier for itself than ever being in heavy moult. Typically this moult should be saved for its wintering grounds in Africa, and is likely a result of being well out of range (i.e. 'shock moult'). Some feathers have been collected in the last week, although with Red-tailed and Red-backed Shrike mtDNA being so similar some birders may wish to look away now … 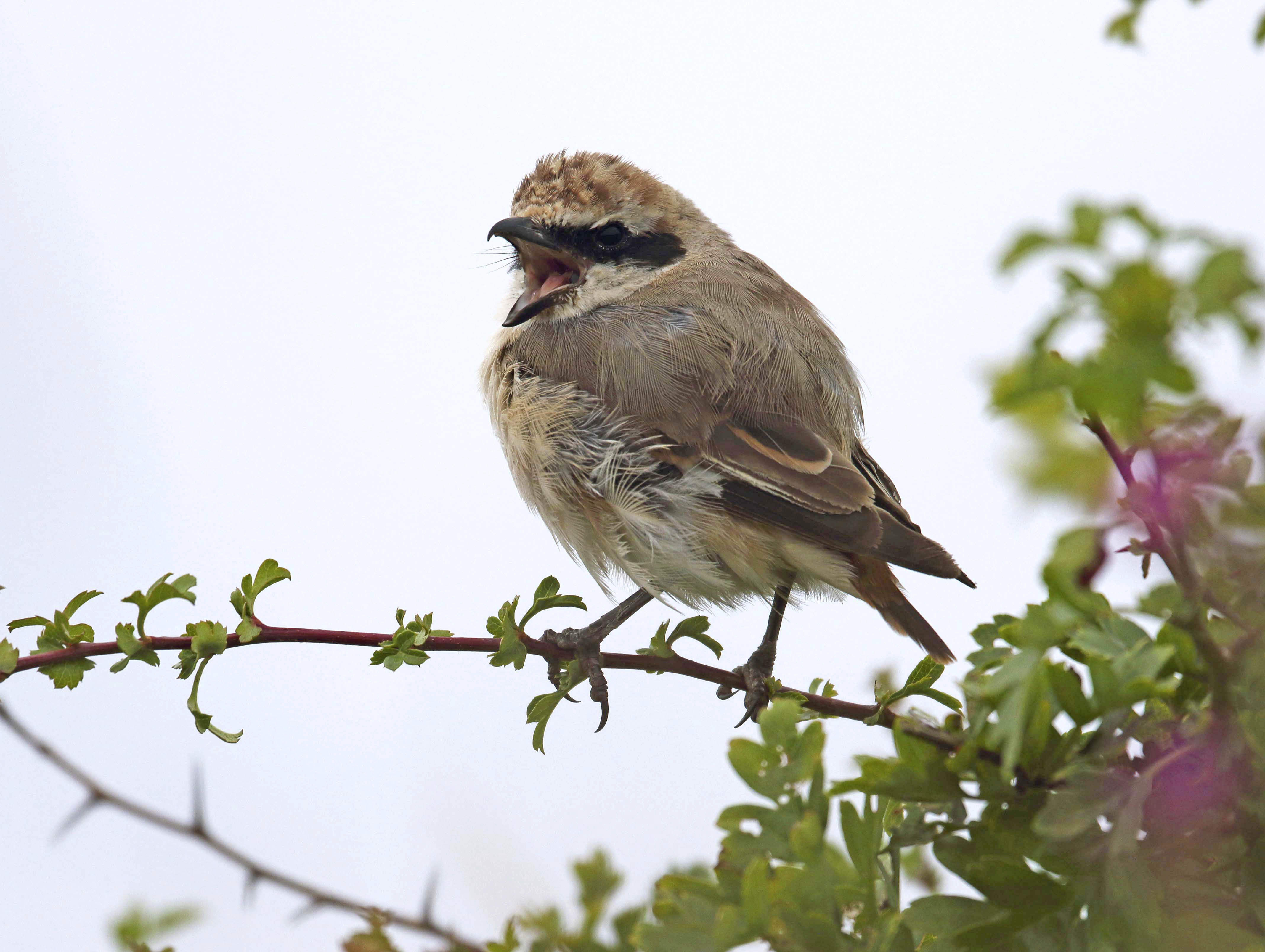 Just 300 m along the cliff, the Black-browed Albatross continued to prove reliable. The power of three was at play with an adult Long-tailed Skua photographed on a post along the same path the shrike frequents – a handy half-way marker for those moving between shrike and albatross that morning. 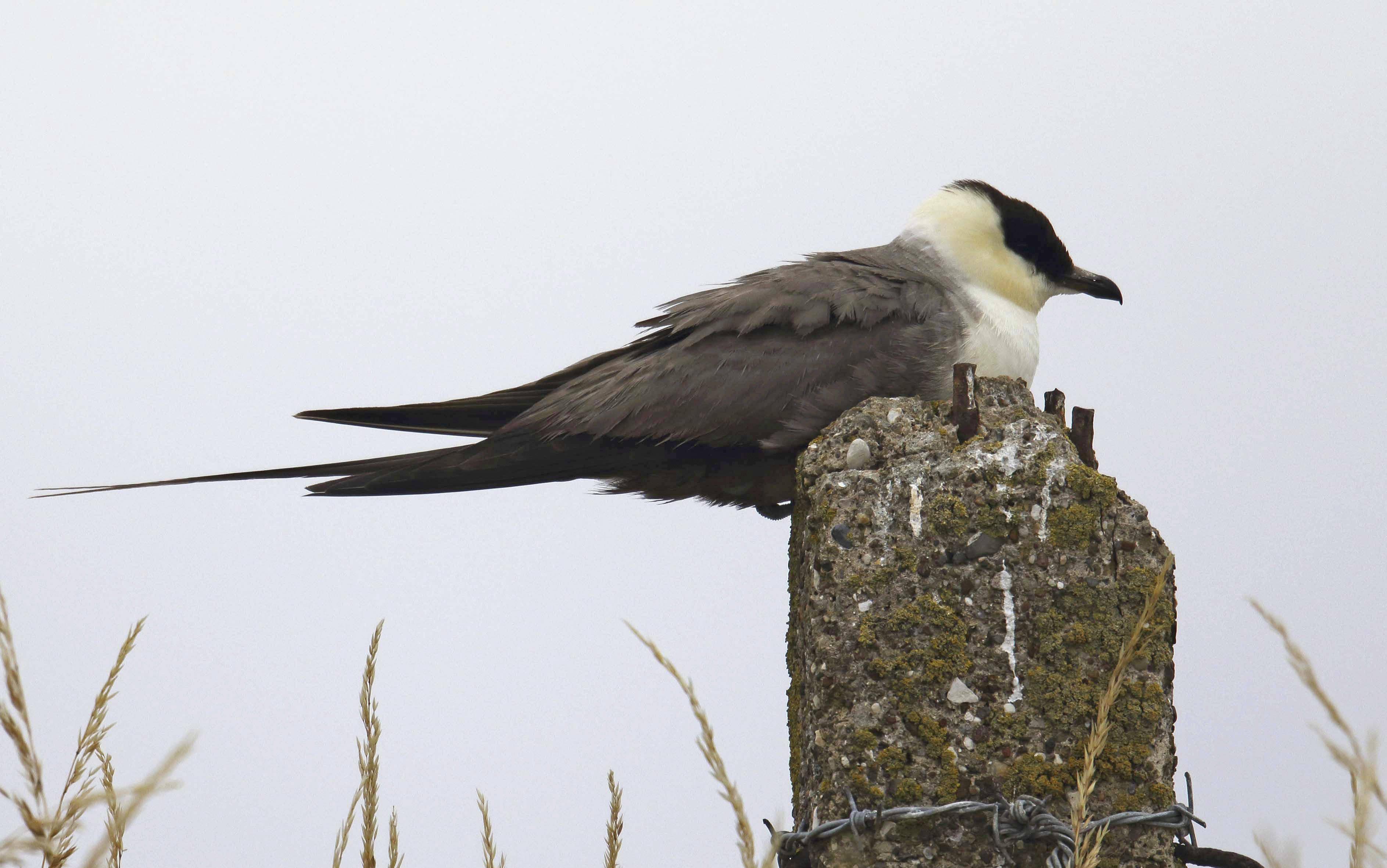 The week saw Gull-billed Tern become the latest addition to the Peterborough area list, with an adult at Baston & Langtoft Pits, Lincolnshire, between 19th and 21st – an excellent inland record and only the eighth for Lincolnshire. The bird behaved in typical Gull-billed Tern fashion, putting in regular appearances inbetween sorties away hawking for dragonflies, and was also noted overflying nearby Etton-Maxey Pits on 20th. Another flew through at Oare Marshes NR, Kent, on 20th. 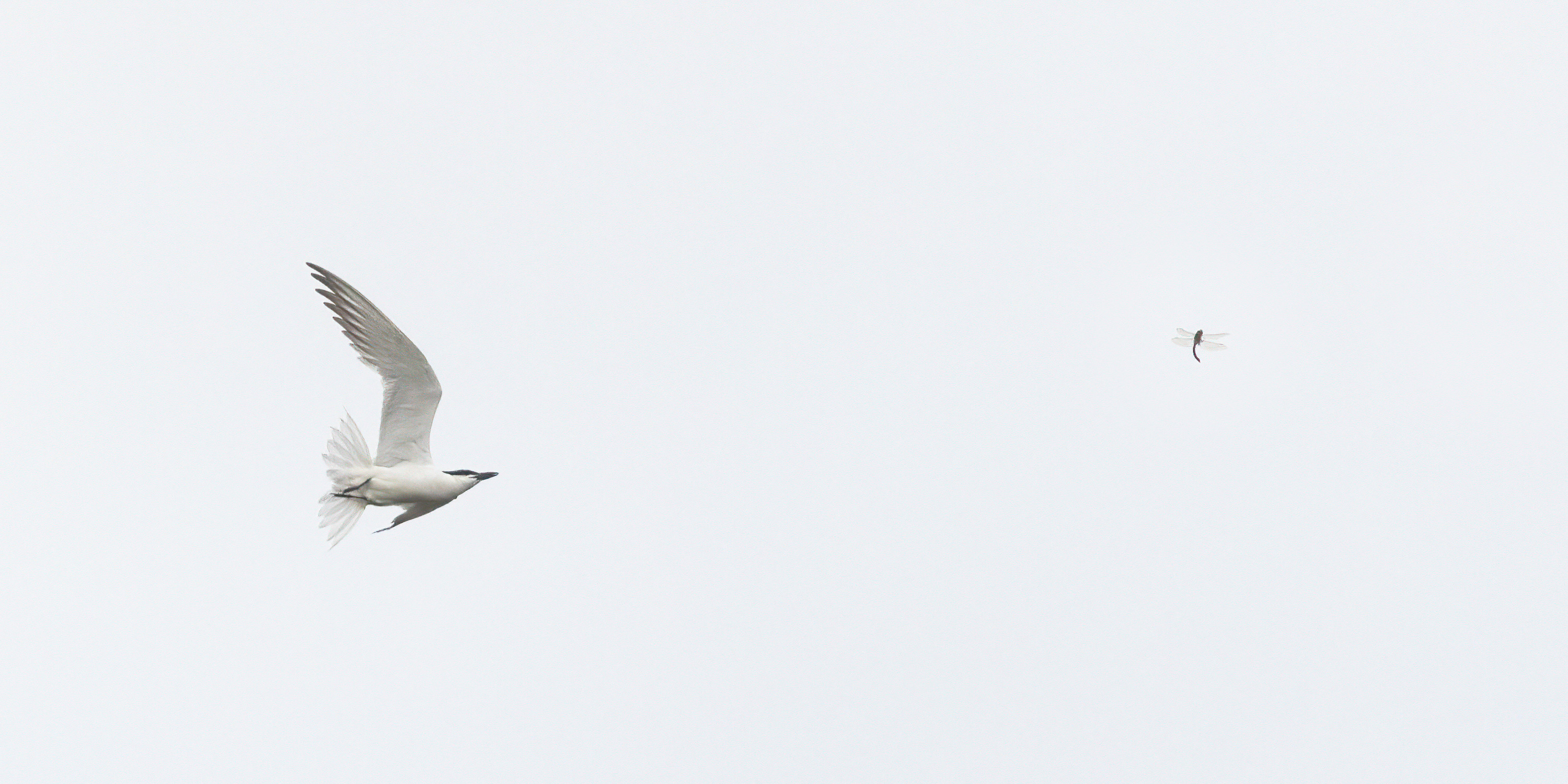 Ireland held onto both mega terns for another week. The Least Tern was reported on four days at Portrane, Co Dublin, while an adult Elegant Tern was discovered in the Sandwich Tern colony at Inishroo, Co Galway, on 18th. Consensus is the bird is the Lady's Island Lake individual relocating that was last reported there on 22nd. The returning adult Forster's Tern made another appearance at Inishroo on 23rd.

Considering how elusive and quite it's been recently I was delighted to get some audio of the Least Tern at Portrane last weekend. @BWIFingal @BirdGuides @BirdWatchIE pic.twitter.com/YrCQLu3Cic An adult White-winged Tern was photographed in the Doncaster area on 23rd although the bird was at a private site and wasn't twitchable. The adult American Black Tern was at Long Nanny, Northumberland, more days than it wasn't.

It was another big week for Caspian Tern reports with birds in six counties. The Gloucestershire bird continued to loiter along the Severn, becoming the first twitchable record for the county. A single adult remained at Saltholme RSPB, Cleveland, until 19th and the following day one commuted between Holme Pierrepont and Netherfield Lagoons, Notts. The 21st saw the adult return to Hickling Broad NWT, Norfolk but this too proved a one-day event. One was noted flying north offshore past Frinton-on-Sea, Essex, on 22nd when an adult rocked up at Staveley YWT, North Yorkshire. The weekend saw the first blank shifts for this species in a while. Needless to say, Kent's Bonaparte's Gull remained steadfast at Oare Marshes NR for another week. A new bird was uncovered at East Wemyss, Fife, on 22nd and lingered until late morning the following day. The 18th saw Sabine's Gulls at Loch an t-Saile, South Uist, and North Ronaldsay. The seawatching season cranked up a gear by the week's end. Co Cork was evidently the place to be, with two Fea's-type petrels tracked along the coast on 24th. Cape Clear also had the lion's share of shearwaters: some 995 Cory's Shearwater and 134 Great Shearwaters moved past through the day. The South-West Approaches also got in on the action: watchers at Porthgwarra noted 358 Cory's past in nine hours on 24th.

Elsewhere, a single Cory's flew north past Cullernose Point, Northumberland, on 21st and one flew past Chapel Point, Lincolnshire, on 24th. The southerlies also saw the first Balearic Shearwaters 'channel hopping' with a trickle of birds between Portland and Cornwall. Pelagics out of Baltimore, Co Cork, saw five Wilson's Storm Petrels on 20th and again on 21st, one was noted on the Scilly pelagic on the latter date.

The Stilt Sandpiper was still being noted at Alkborough Flats, Lincolnshire, at the week’s close, although was elusive at times. Predictably the bird proved popular and a queue to get into the hide was implemented at one stage. The Lesser Yellowlegs continued to perform well at Normandy Marsh, Hampshire, throughout and another was at Titchwell RSPB, Norfolk, from 23rd. Pectoral Sandpipers had a respectable summer run with birds at 17 sites. Extralimital Eurasian Stone-curlews were reported from Cliffe Pools RSPB, Kent, and Fairburn Ings RSPB, West Yorkshire. The family of six Black-winged Stilts were still present and correct at Potteric Carr YWT, an adult reported at iPort Lakes, Doncaster, on 22nd is thought to concern one of the breeding adults on a quick foray.

There was a notable upturn in White-rumped Sandpipers this week. As many as six birds made the news page, albeit there should be some allowance for relocating birds. The biggest outlier was a smart adult poking around an unassuming flood in Buckinghamshire, the first county record. The bird showed well at times and was present on 21-22nd and was seen to cross the border into Berkshire the second day.

Other reports concerned last week's lingering adult at Pool of Virkie, Shetland, until 18th; one at Letham Pools, Fife, on 19-20th; one at Titchwell RSPB, Norfolk, on 21st; one at Montrose Basin, Angus, on 21-22nd; and one at Kilnsea Wetlands, East Yorkshire, on 24th. This influx was also seen at a smaller scale across Europe with one in Iceland, two in Norway, one in Sweden and one in Italy. Time to get down to your local wader hot-spot! 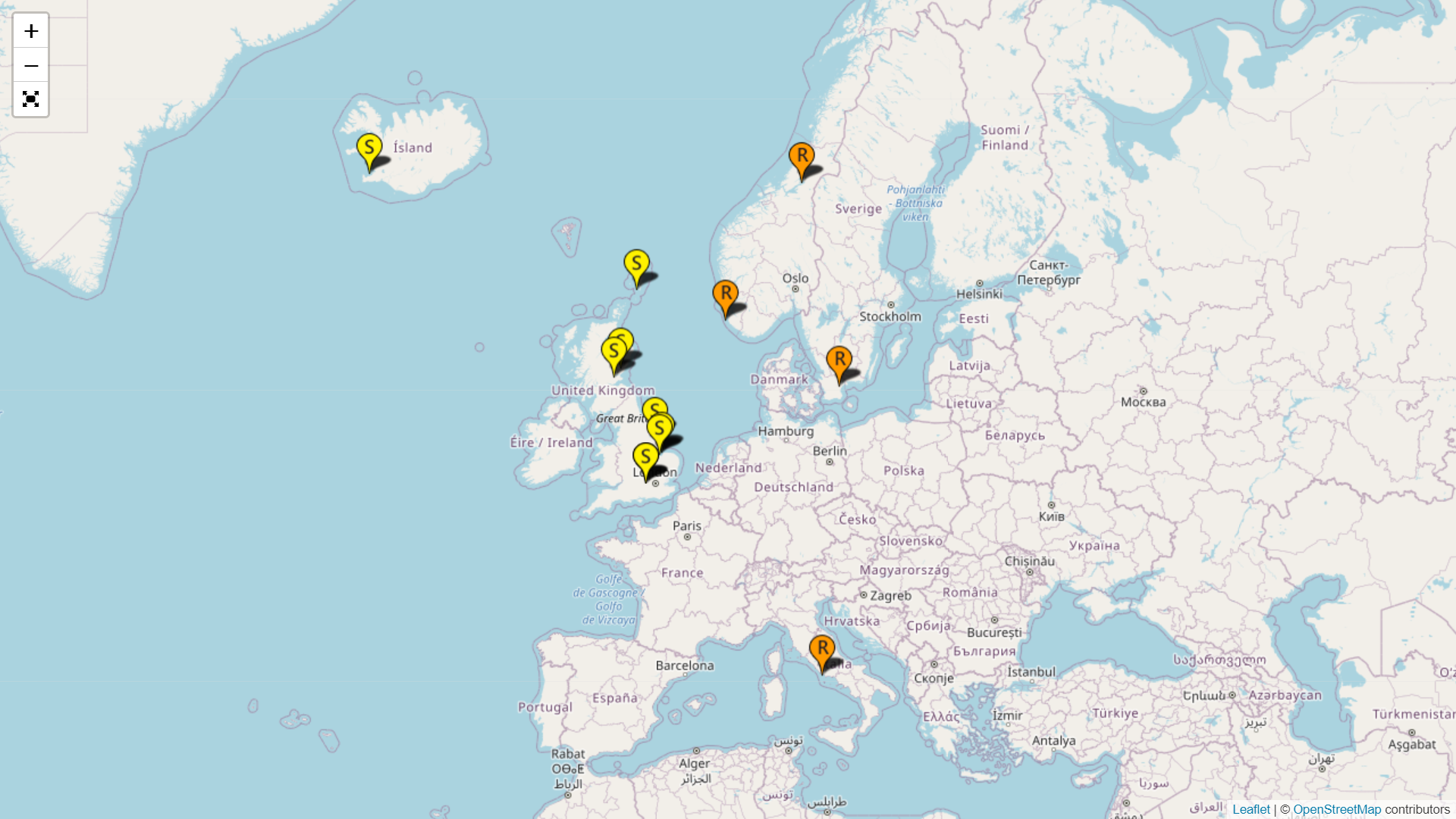 A map of July 2022 records of White-rumped Sandpiper in Europe.

Both Black-crowned Night Herons continued to flirt with visitors. Kent’s immature put in two evening appearances at Oare Marshes NR, on 18th and 24th. Meanwhile, Cley's adult resurfaced on 24th after a week's absence. Purple Herons were at a healthy five sites. A probable flew past Sennen, Cornwall, on 18th, when one touched down at Porth Reservoir. An adult was noted in flight at Valley Lakes RSPB, Anglesey, on 19th but not reported since. The 22nd saw a brief juvenile at Brading Marshes RSPB, Isle of Wight, and another juvenile set up camp at Stodmarsh NNR, Kent, from 23rd, although proved typically elusive.

Glossy Ibis were at 18 sites, nearly double last week's figure, with a peak count of 11 at Fen Drayton Lakes RSPB, Cambridgeshire. A surprise re-appearance of the Smithy Fen White Stork was a brief affair on 21st.

A first-summer male Montagu's Harrier flew over Oare Marshes NR on the morning of 23rd, a fine record for a species petering out in the country.

Some welcome news came from Trimingham, Norfolk, with chicks from both European Bee-eater nests hatching during the week, a great testament to the wardening team involved. This stands as just the eight confirmed breeding attempt in the UK, with four previous attempts seeing chicks fledge. Fingers crossed for the Norfolk birds, as they're brilliant birds to see – but perhaps time to flick back to the opening paragraph … An Icterine Warbler was trapped and ringed at an undisclosed site in Wiltshire on 24th – the county's fourth record – and an unorthodox time of year; a great record. The Iberian Chiffchaff continued at Regent's Park, London. Three Rosy Starlings were on offer, the adult continued to be reported at Holm, Orkney, and another was at Birsay on 20th. A first-summer was also photographed in a private garden in Chesterton, Gloucestershire, on the morning of 22nd but there was no further sign thereafter.

For those so inclined, the hot weather has also seen an increase in scarce insect reports. Lesser Emperors are the clear winners, with some 25 sites logging them, most notably Co Monaghan saw its first record, with other outliers from Mire Loch, Borders, and Loch Spynie, Moray. Queen of Spain Fritillary and Long-tailed Blue were seen at three and two sites respectively. A Geranium Bronze was also photographed in Brighton, East Sussex, on 17th.

The satellite-tagging project on Poland's regular Ring-billed Gull continues to provide great insight. The adult was found paired with a Common Gull in the Russian city of Nizhny Novgorod, 400 km east of Moscow. The pair produced hybrid young, and the Ring-billed started to move back west for the winter, with Lithuania seeing its first record on 23rd.

Finland became the latest country to add Pygmy Cormorant to its national list, with two discovered at the unlikely inland site of Siilinjärvi on 22nd. An adult drake Harlequin Duck was photographed at Porsanger, Norway, on 19th and is likely to be last year's drake returning. An adult female Wilson's Phalarope was at Lassor, Sweden, on 21st, the country's 11th record.

A showy adult male Greater Sand Plover was at Texel, The Netherlands, on 22-23rd. France's Bridled Tern continued at L'Île aux Moutons until 21st and the White-rumped Swift was still attending the local Red-rumped Swallow colony at Minerve. The male White-throated Sparrow remained settled at Les Bouchoux and at least one Elegant Tern lingered at Grau de Piémanson.