The recent dearth of new rarities appeared to have been broken in spectacular fashion when news of an adult or 3rd-winter Audouin's Gull in Dargan Bay (Co. Antrim) arrived on 17th. Hopes were dashed however when photographs revealed several anomalies and it now appears to be either an aberrant individual of one of the other large gull species or a hybrid, possibly with a few Audouin's Gull genes. Observers searching for this bird were however rewarded with a 1st-winter Franklin's Gull at the same site on 21st. Elsewhere the female Redhead remained on Tiree (Argyll) to at least the 19th, the Black-throated Thrush remains in Swansea (Glamorgan), as does the Hume's Leaf Warbler in Whitley Bay (Northumbs). The four Penduline Tits were still at Rainham Marshes RSPB (Greater London) to the 16th with at least two on 20th. Hot on the heels of last week's reports, another White-billed Diver was logged, this time flying north close inshore past Hornsea (East Yorkshire) on 17th.

The Redpoll debate continued with new Arctic Redpolls reported this week from Exbury (Hampshire) on 18th, Holt (Norfolk) on 19th and High Hoyland (South Yorkshire) again on 20th. Elsewhere birds remained at Aberlady Bay (Lothian) and Rendlesham (Suffolk). The Hoopoe continued to brighten up Gosport (Hants), the Common Rosefinch was still visiting feeders in Sheffield (South Yorkshire) to at least 19th and the Little Bunting was still at Morston (Norfolk) on 17th. There were at least six Great Grey Shrikes between Borders and Hampshire and eight Shore Larks on the east coast between Norfolk and Kent. Seven Lapland Buntings were reported from the east coast including three on Holy Island (Northumberland). Once again the largest Waxwing numbers were in the north with 108 in Aberdeen on 16th, 60 in Lisburn (Antrim) on 18th and 56 in Sheffield (South Yorkshire) on the 16th. Further south numbers in Pitsea (Essex) built up to 44 by the 22nd and a single bird penetrated as far southwest as Tiverton (Devon) on 19th. 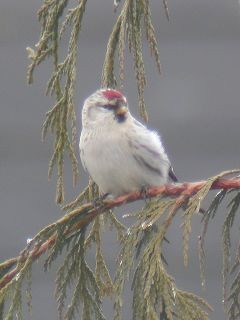 The reintroduced Great Bustard from Salisbury Plain was last reported at Bleadon Level (Somerset) on 16th. The four Common Cranes remained in Devon throughout with at least 23 still in the Waxham (Norfolk) area. There were still at least 14 Cattle Egrets in the south of England, eight at Piddinghoe (E. Sussex), three just north of Pagham Harbour (W. Sussex), 2 at Britford Water Meadows (Wiltshire) and a single at Warblington (Hants). Eleven Spoonbills included four still on the River Lynher in Cornwall and three on the Taw Estuary (Devon). Regular Rough-legged Buzzards remained at Harty Marshes (Kent), Massingham Heath (Norfolk) and the Haltham (Lincolnshire) area with a new bird appearing near Whiteadder Reservoir (Lothian) from 16th.

A total of seven Laughing Gulls were reported during the week, with singles at Glaslyn Marshes (Gwynedd), Nimmo's Pier (Co. Galway), Cork City Lough (Co. Cork), Ardrossan (Ayrshire), Fremington Quay (Devon), Brixham (Devon) and Reading (Berkshire). At least 15 Ring-billed Gulls were reported, including three at Nimmo's Pier (Co. Galway) on 19th and two at Crosby Marine Park (Lancashire) on 17th. Iceland Gull numbers fell slightly with just 41 birds reported this week with the largest counts once again coming from Northern Ireland with 8 at Culmore Dump (L'derry) and 4 at Dargan Bay (Co. Antrim). Conversely Glaucous Gull numbers increased slightly to 18, with birds reported as far south as Cornwall but with no more than two birds at any site. Caspian Gulls just scraped into double figures with 10 birds including two first-winters at Saddle Bow (Norfolk) on 19th. The 2nd-winter American Herring Gull was at Sennen Cove (Cornwall) again on 21st with a possible 1st-winter reported at Pegwell Bay (Kent) on 16th. The 3rd-winter Kumlien's Gull remained at Nimmo's Pier (Co. Galway) and adults roosted again at Cotswold WP (Glos) on 21st and Chew Valley Lake on 18th. The adult Forster's Tern remained at Nimmo's Pier (Co. Galway), as did the Long-billed Dowitcher on the Hayle Estuary (Cornwall). A total of just eight Little Auks were recorded off the east coast on 22nd, including five north at Catterline (Aberdeen).

A white-morph Snow Goose at the north end of Loch Craignish (Argyll) on 21st and 22nd was presumably the same bird as seen at Craobh Haven a few miles to the north in November 2005. A minimum of six Black Brants and several hybrids remained along the coast between Norfolk and Dorset. Single "small race" Canada Geese remained at Caerlaverock WWT and on Islay (Argyll) while 170+ Taiga Bean Geese were at the traditional wintering site around Fannyside Lochs (Clyde) with wanderers including 2 at Martin Mere (Lancashire) on 21st and singles at Mountnorris (Co. Armagh) and Somerleyton Marshes (Suffolk) on 22nd. The female Black Duck was still on Tresco (Scilly) on 21st, the Black Scoter was off Llanfairfechan (Conwy) to at least 19th and the Barrow's Goldeneye remained at Quoile Pondage (Co. Down) after a brief excursion downstream to Strangford Loch on 12th. The Lesser Scaup at Westwood Pool (Worcs) was last reported on 19th while others remained on the Ouse Washes (Cambs), Caerlaverock WWT (Dumfries and Galloway) and Drift Reservoir (Cornwall). The only Ferruginous Duck still on offer was the long-staying bird at New Hythe GPs (Kent). Drake King Eiders were still off Peterhead (Aberdeenshire) on 16th and Nairn (Moray/Nairn) to at least 21st. A pair of Surf Scoter were relocated in the Sound of Taransay (Outer Hebrides) on 19th while the drake remained off Ruddon's Point (Fife) to at least 18th. A total of ten Ring-necked Ducks included two drakes in Cumbria, one at Sunbiggin Tarn and one on Grasmere. There were ten Green-winged Teals, including two drakes together at North Slob WWR (Wexford) and American Wigeons remained at Needingworth (Cambs), Hayle Estuary (Cornwall), Roadford Reservoir (Devon), Barvas (Outer Hebrides) and Breydon Water RSPB (Norfolk).