It's impossible to look past Norfolk's second Great Knot in three years as the stand-out bird of an otherwise quiet early summer week. A stunning breeding-plumaged individual, it was discovered among a throng of non-breeding Knot at Titchwell RSPB early last Wednesday afternoon and has been seen in the area ever since, though it can be quite mobile and has been ranging as far as Scolt Head Island. Just the fifth ever to be recorded in Britain, it is in immaculate condition and has given many birders an upgrade on the Breydon bird of 2014, both in terms of look and views. It appears to be a different individual to that seen in The Netherlands in May and, with two of these typically long-lived birds in western Europe, it may well prove that further records follow in the coming years. 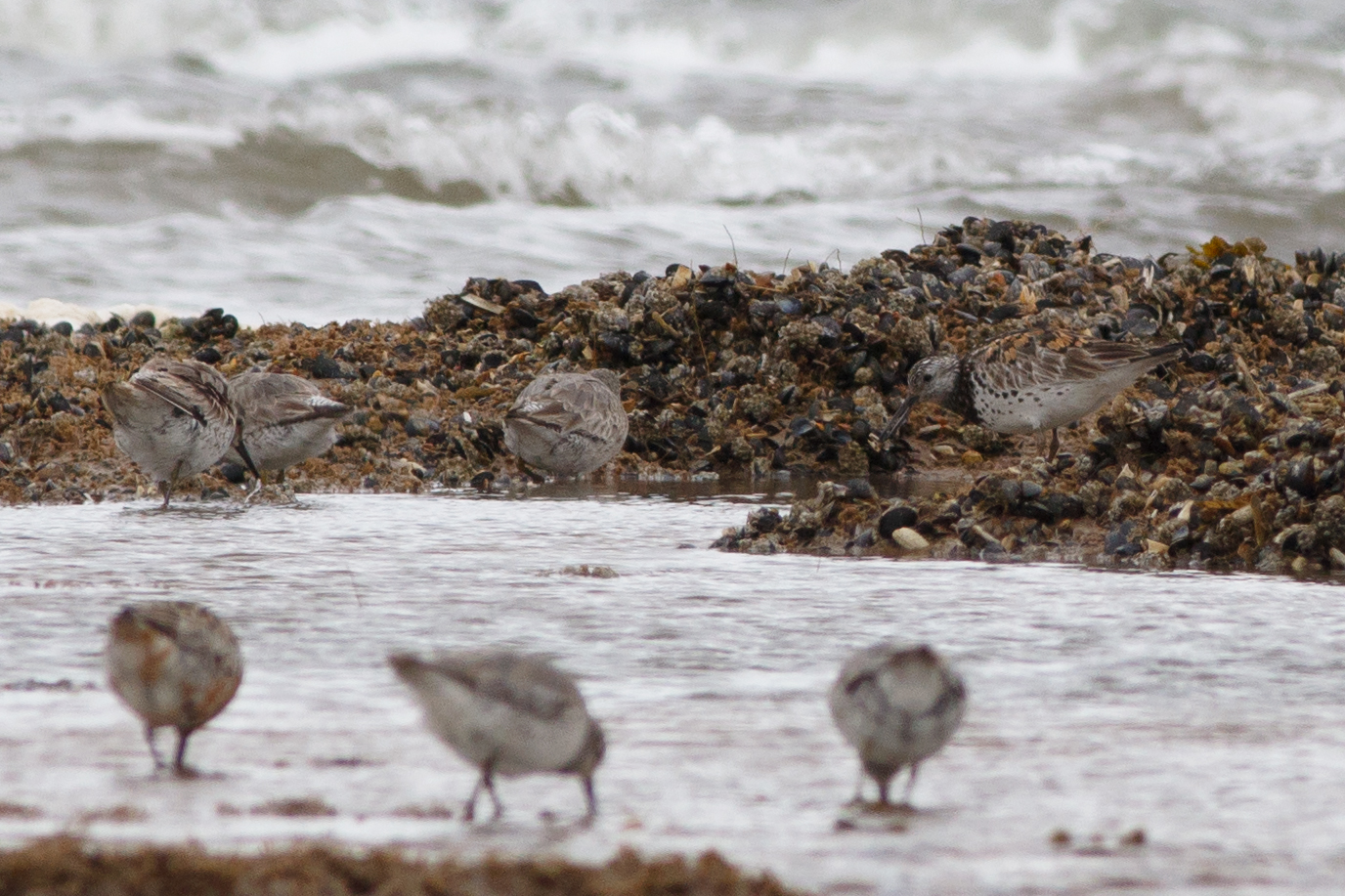 Knot aside, the only other 'mega' news concerned an unconfirmed report of a Mourning Dove on Orkney on 18th, but nothing substantiated ever came of it. Among the most popular birds of the week were the two Caspian Terns at Gibraltar Point which, uncharacteristically for the species, went on to linger for several days. Last seen on 18th, these are the longest-staying examples of the species ever recorded in Lincolnshire and the first in the county since a bird at Freiston Shore in May 2009. What was presumably one of these birds relocated to Breydon Water, Norfolk, from late evening on 19th and throughout 20th. 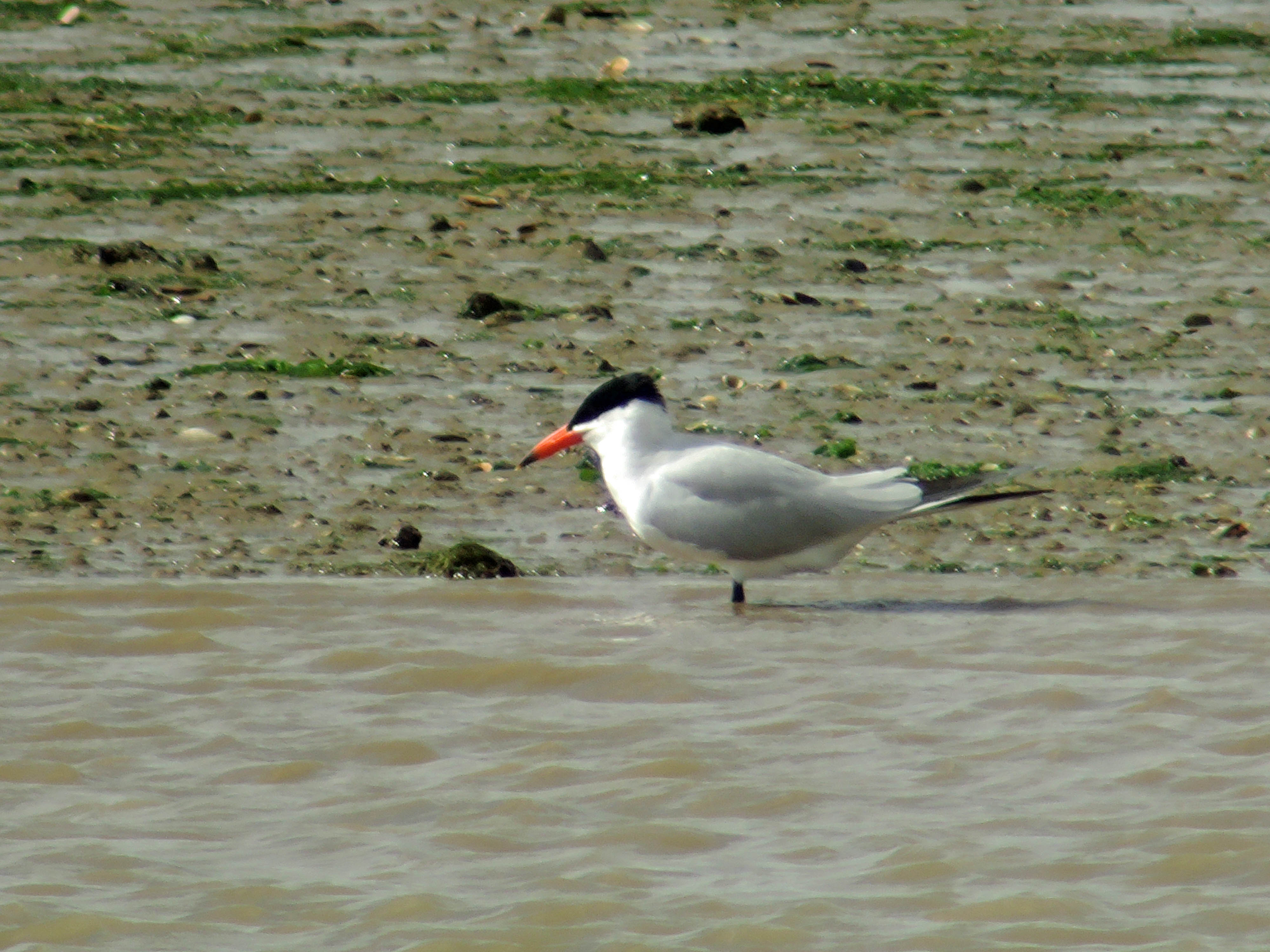 Along with shorebirds, terns usually feature quite prominently among the summer rarity headlines and two continuing Gull-billed Terns ensured that this remained the case. The Scottish bird stayed at Kinneil Lagoon, Forth, all week but the Co Wexford bird was last recorded at Tacumshin on 15th. A White-winged Black Tern commuted between Clwyd and Cheshire on 17th before presumably relocating to Martin Mere, Lancs, the following day. Many will be hoping that last week's Lesser Crested Tern in Germany, not seen since it was discovered, might make it across the North Sea to boost the already-impressive list of tern species recorded this year. 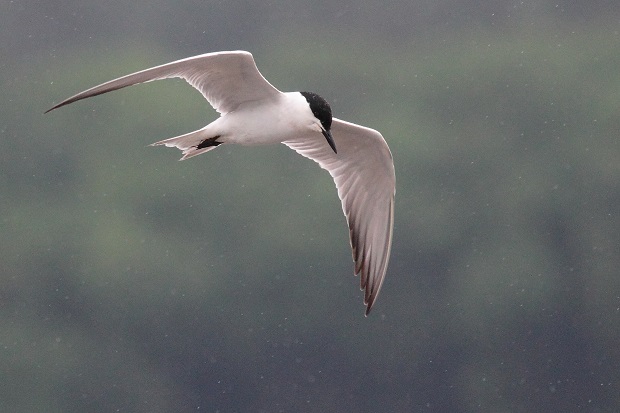 Returning to shorebirds, a Pacific Golden Plover was a brief visitor to Titchwell, Norfolk, on 18th but proved much less co-operative than the Great Knot. A smart Broad-billed Sandpiper showed well at Newport Wetlands, Gwent, from 18th — could this be the bird seen here earlier in the spring? The only Red-necked Phalarope was the continuing female still at Grindon Lough, Northumberland, all week. Quite amazingly, the Ring-billed Gull in Enniskillen, Co Fermanagh, represents the first county record — it was still there on 16th. An adult Bonaparte's Gull was at Tacumshin, Co Wexford, on 19th and the first-summer was still in Northumberland the same day. An adult Long-tailed Skua briefly at Anglers Country Park, W Yorks, on 20th was an unusual record. 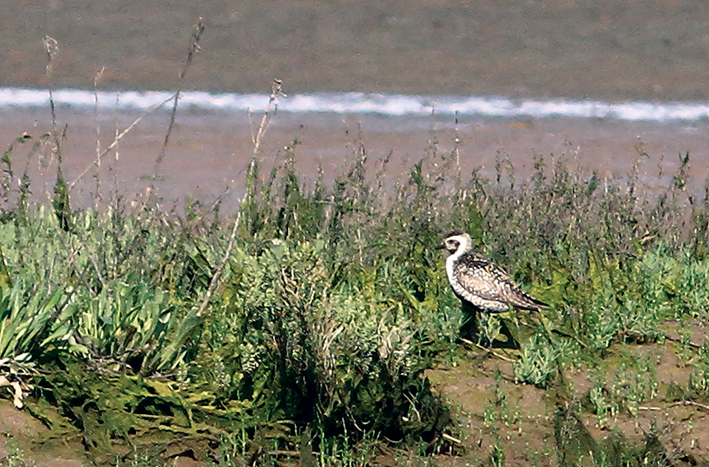 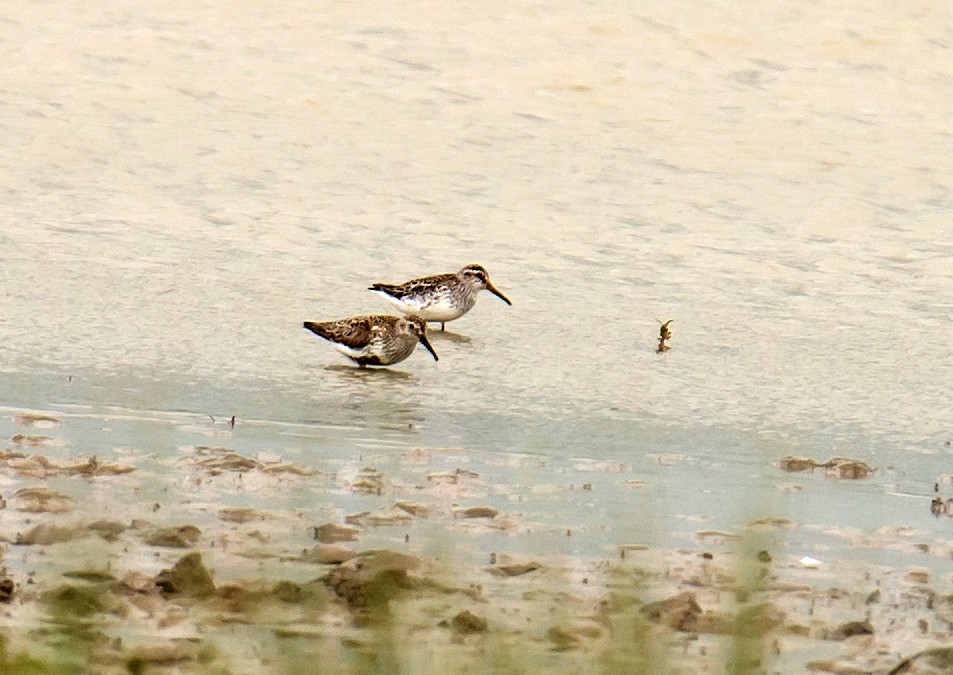 It seems a long time since the Dalmatian Pelican was giving large numbers of stressed twitchers the run-around in westernmost Cornwall — and in some way it was, for it's now well into its second month in the county. Rather in contrast to its initially unpredictable behaviour, the bird is now very settled and seems very much at home at Restronguet Creek, where it spent large portions of this week.

A probable Little Bittern was heard 'barking' at Stodmarsh, Kent, on 20th, while the male continued to hold territory at Old Moor, S Yorks, all week. The only Purple Heron was at Llanddewi Brefi, Ceredigion, on 15th. A probable Night Heron flew over Loch of Strathbeg, Aberdeenshire, in the twilight during the early hours of 19th, and another was at Ham Wall, Somerset, on 16th. Belated news was received of a Squacco Heron on the Trent and Mersey Canal south of Egginton, Derbys, on 8 June. Cattle Egrets were found at Sidlesham Ferry, W Sussex, on 18th and at Dungeness, Kent, on 20th. Glossy Ibises were recorded in Suffolk, Somerset, Nottinghamshire, Lancashire and Co Wexford, and White Storks (perhaps the same individual?) were in Somerset and Gloucestershire. 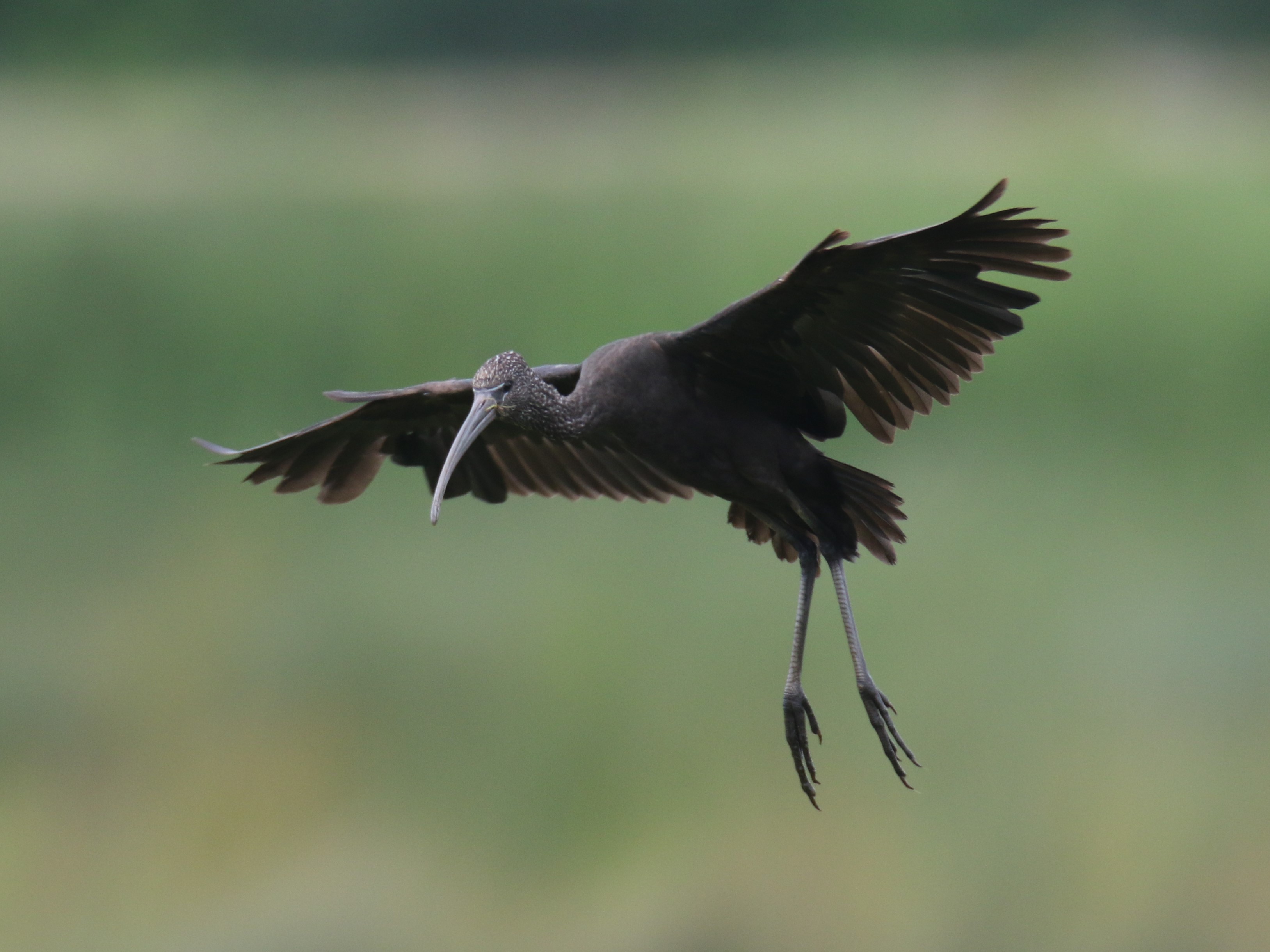 Wildfowl news was in short supply this week, but the female King Eider was again seen off Musselburgh, Lothian, from 18th, and  — judging by photographs submitted to us — it's been showing quite brilliantly. A Surf Scoter was a surprise find off Marske, Cleveland, on 18th, though the drake Ring-necked Duck at Marazion, Cornwall, on 15th was arguably even more unexpected. Other Ring-necked Ducks included the long-staying bird on Islay, Argyll and another on Orkney on 21st. The drake Green-winged Teal was again at Hale, Cheshire, to at least 19th, while the Ferruginous Duck continues at Washington WWT, Durham. 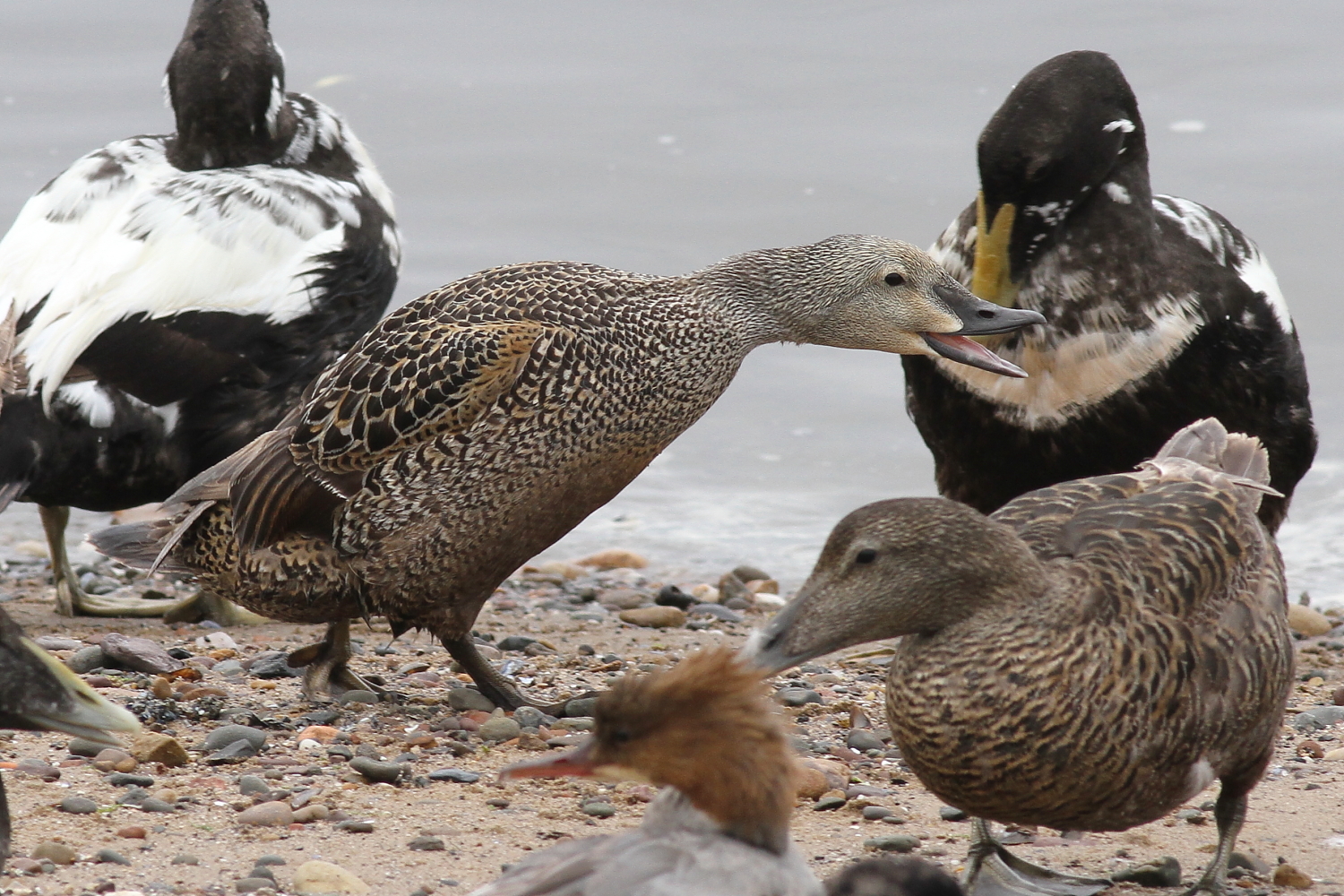 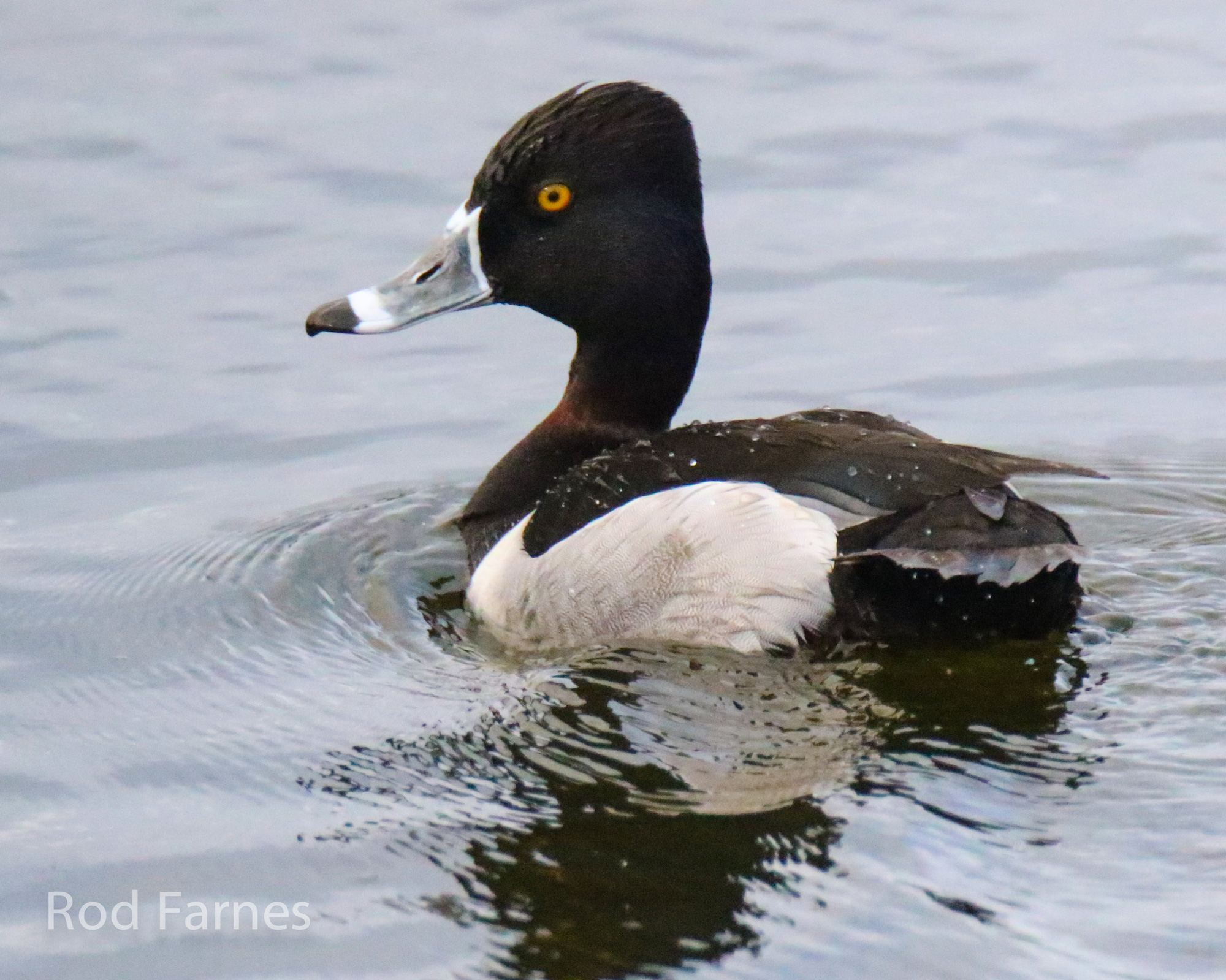 A Black Kite was reported from Marazion, Cornwall, on 18th, with another south of Eastry, Kent, the following day, but raptors were otherwise poorly represented — a fly-over possible male Red-footed Falcon in Norfolk was the best of the rest.

The Great Spotted Cuckoo was again on Portland from 15–18th and we're not sure whether birders should read too much into a lack of sightings on 19–20th. A fantastic record concerned a singing Blyth's Reed Warbler on private land at Rye Harbour, E Sussex. Bardsey Island logged its fourth Greenish Warbler of the spring on 16th, and Portland also bagged one on 18th. The Iberian Chiffchaff was still singing on Tresco, Scilly, on 17th, while the Paxton Pits Great Reed Warbler was last noted on 16th. Three Marsh Warblers included one reported from Arranmore Island, Co Donegal, on 15th; the singing Icterine Warbler was not seen at Laggan, Highland, after 18th. 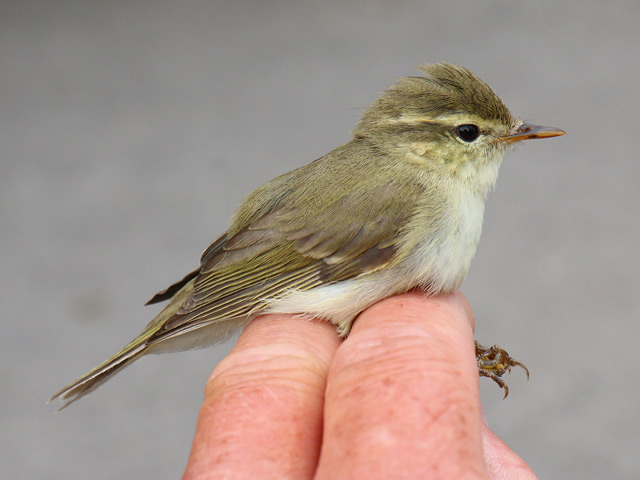 Woodchat Shrike is a very rare bird on the Scottish mainland, so a stunning male at St Abbs Head, Borders, from 19th was a popular fixture and also a Scottish tick for many. A female Red-backed Shrike and male Grey-headed Wagtail both arrived on Fair Isle on 20th, acting as a reminder that it's never quite safe to rest on your laurels on the Scottish Isles, even in mid-summer — the Rustic Bunting on Isle of May, Fife, on 18th was another example of this. A female Red-headed or Black-headed Bunting was at Calf of Man Observatory on 17th. 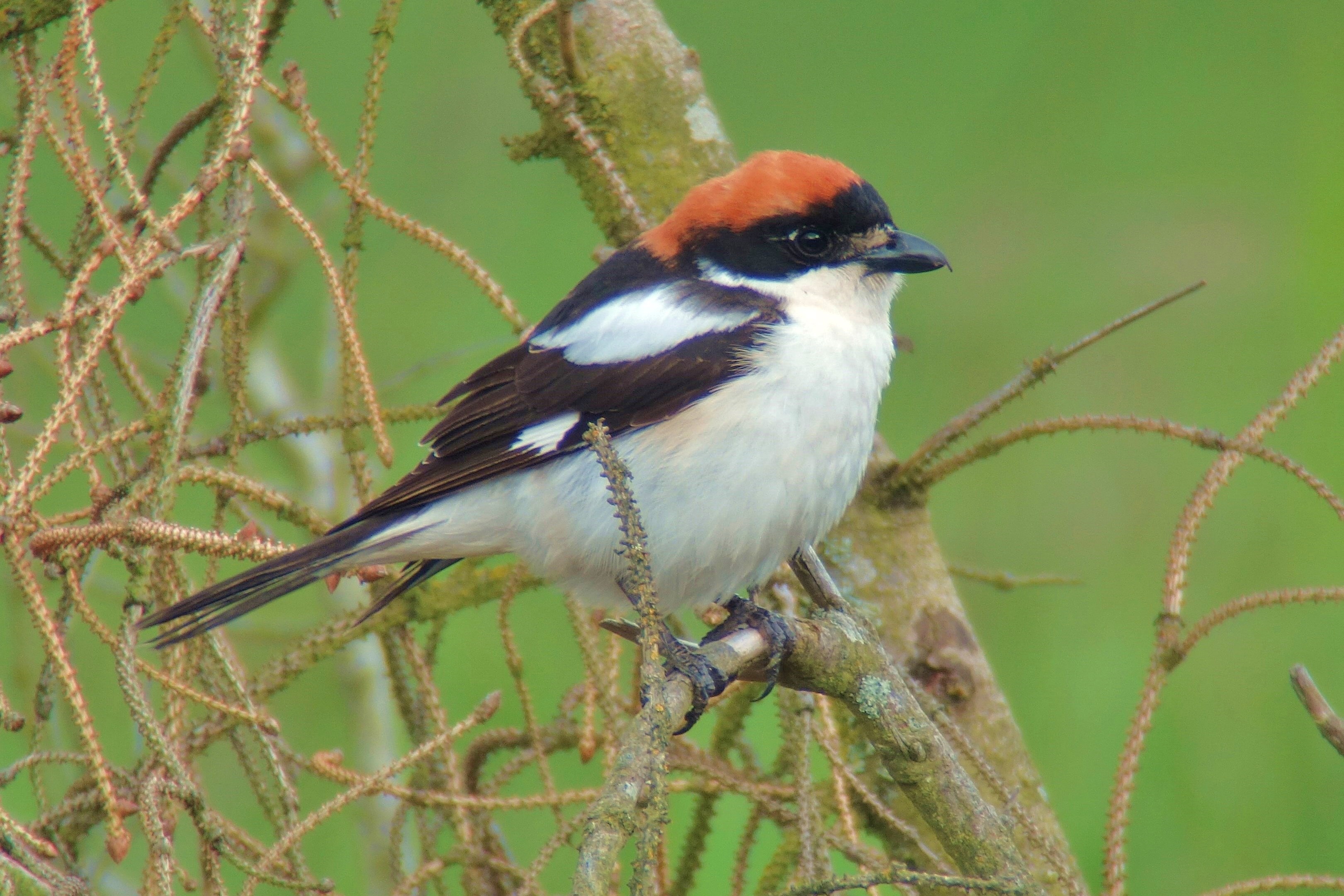 The only Hoopoe record came from Little Odell, Beds, on 18th. European Bee-eaters were at Cuckmere Haven, E Sussex, on 16th and over Portland, Dorset, on 18th. A family of three European Serins was reported from Beachy Head, E Sussex, with four there on 17th and at least one still on 18th. Another, a singing male, was at Hassocks, W Sussex, on 21st. An immature male Common Rosefinch was in Bray, Co Wicklow, on 17th. Golden Orioles were on Fair Isle on 15th and still at Spurn to 15th, with further reports from London and Staffordshire. 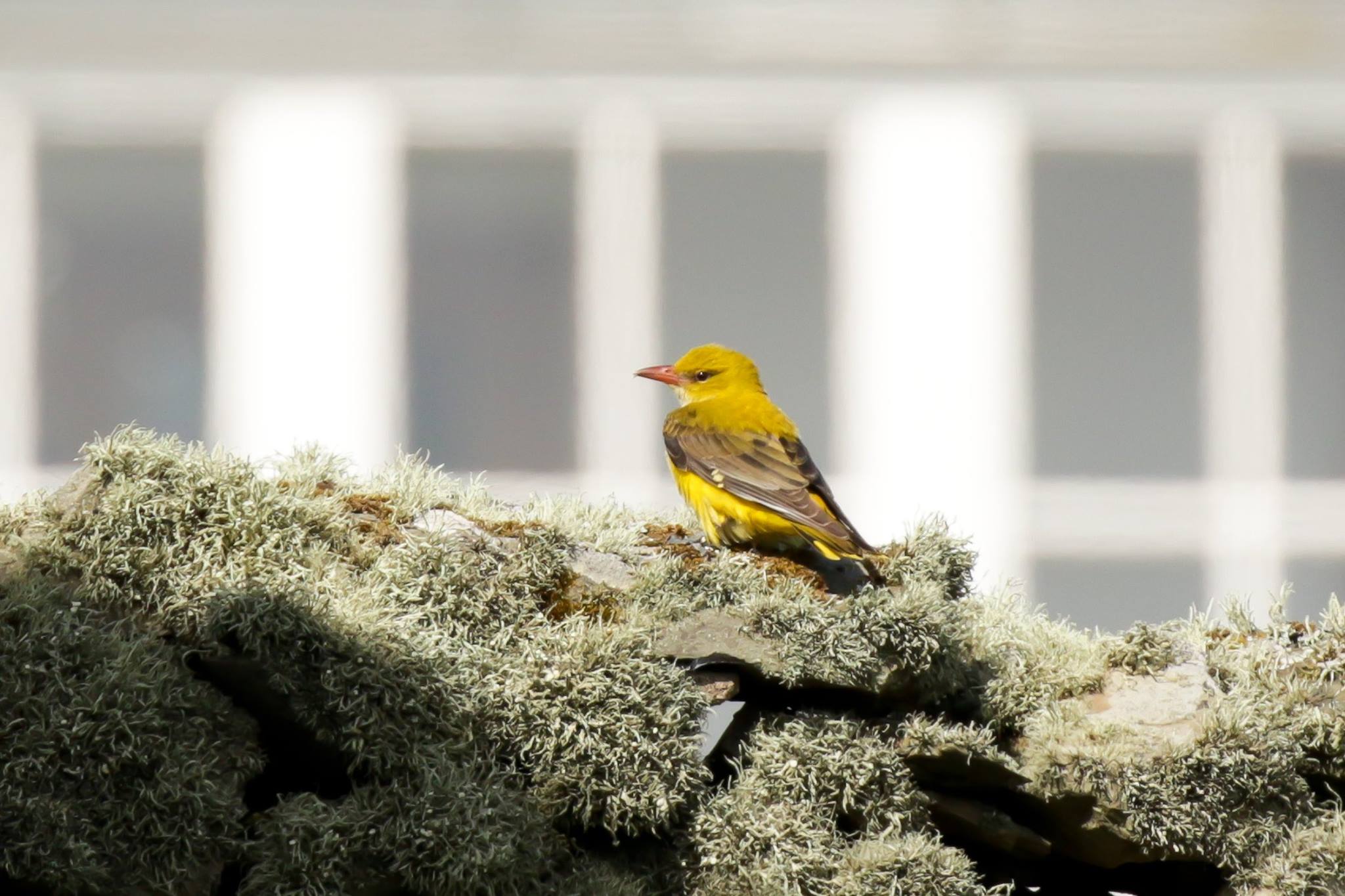 A Long-tailed Shrike in Atyrau, Kazakhstan, on 14–15th was a fantastic spring record for the region (photo here). Another highlight this week was a White-backed Vulture at Puente de Montañana, Aragón, Spain, on 17th — the fifth national record.

Other records included an Eastern Imperial Eagle at Lubans, Latvia, on 18th — the country's fourth record but the first to actually be seen (other occurrences have been via GPS transmitter). A female White-throated Robin in Uppland on 19th was Sweden's ninth. Norway's fourth Stilt Sandpiper was at Klepp, Rogaland, from 19th. A continuing Pied-billed Grebe was in Castilla y León, Spain, and Denmark registered its seventh Eurasian Griffon Vulture on 21st.