A lively August week saw two rare shorebirds steal headline spots, although an excellent run of seabirds along both eastern and western coastlines will have defined the period for many.

Co Cork's productive August continued with an adult Sharp-tailed Sandpiper at Clogheen Marsh, Co Cork, from 17th. Just the tenth for Ireland, this striking Calidris has proven rather more difficult in recent years after a strong run of records in the mid-2000s. Indeed, it is Ireland's first since a brief youngster at Carrahane Strand, Co Kerry, in October 2016, with Britain's last as long ago as 2012 on Westray, Orkney. Equally notable in an Irish context was an Aquatic Warbler found in the field at Galley Head, Co Cork, on 18th. With just 13 accepted records to date, the species is a significantly rarer visitor to Ireland than it is to Britain, with the most recent record as far back as September 1989 on Cape Clear, Co Cork. Unfortunately, the bird went to ground almost as soon as it was found, disappointing a number of Irish twitchers who made the journey. Somewhat more expectedly, birds were trapped and ringed at Nanjizal Valley, Cornwall (pictured below), and Totnes, Devon, with a possible in the field at Marloes, Pembrokeshire, on 17th. This caps off a productive period (in modern terms) for this species.

Concluding the week's list of breaking megas was another shorebird. On 20th, Aberdeenshire's second Greater Sand Plover was located on the lagoon at Strathbeg. A smart male, it follows one at Tramore, Co Waterford, back in May. Aberdeenshire's first, meanwhile, hailed from the Ythan Estuary in September 2008. From midweek onwards rainy Atlantic weather front made seawatching in the South-West Approaches an appetising prospect. So it proved, too, as Porthgwarra, Cornwall, boasted a plethora of Pterodroma sightings, with two Fea's-type petrels on 18th followed by singletons on both 20th and 21st. Carnsore Point, Co Wexford, scored the prize find, with a Barolo-type shearwater heading west on 20th. Three Cornish headlands and the Bridges of Ross, Co Clare, saw Wilson's Storm Petrel reports, while one off Strumble Head, Pembrokeshire, made for a rare Welsh land-based sighting.

Pelagic trips into new areas, meanwhile, continue to rapidly change the status of Wilson's Storm Petrel in British and Irish waters, with the species seemingly much more frequent than once thought in deeper waters offshore. A pelagic out of Dungarvan, Co Waterford, on 15th produced no fewer than nine – the county's first records – with another in waters off Co Galway on 17th, while three were noted from a trip into deep waters off Pembrokeshire on 19th. Multiples were recorded on pelagic boat trips off Cornwall, Scilly and Co Cork. An exceptional run of large shearwaters in the North Sea saw reports of both Great and Cory's Shearwaters from several sites between East Yorkshire and Orkney. Other notable records included a Cory's Shearwater off Canvey Island, Essex, and both Great and Cory's from ferries off the Outer Hebrides. Several North Sea vantage points enjoyed Long-tailed Skua sightings, including two off Kent and smaller numbers of Ireland and Scilly. 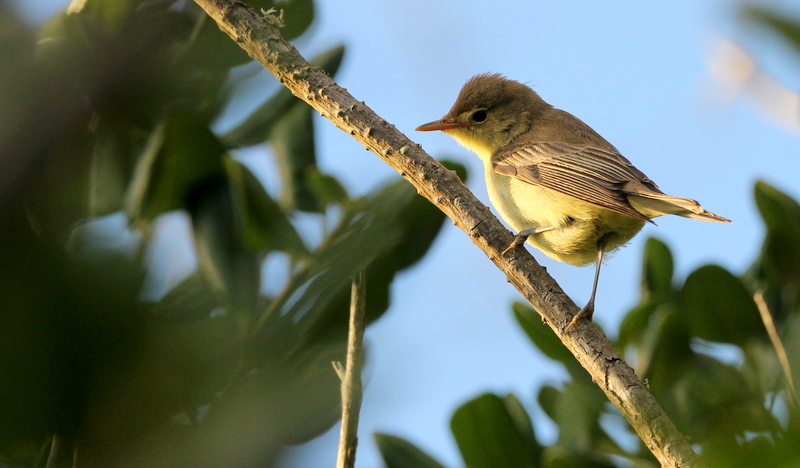 A notable Red-backed Shrike record saw a female appear at Whixall Moss, Shropshire, with others in Cornwall, Norfolk, Lothian and Shetland. Woodchat Shrikes were at Mellon Udrigle, Highland, and East Prawle, Devon. Wrynecks began to arrive, with birds at 15 sites in southern England and Wales. It was another strong showing for Pied Flycatchers too, with high counts of 43 at Spurn, East Yorkshire, and at least 30 at Winterton Dunes, Norfolk. Two Rosy Starlings were noted – at Northleach, Gloucestershire, and lingering at Lerwick, Mainland Shetland Pleasingly, three European Bee-eater chicks fledged from both occupied nestholes at Trimingham, Norfolk, this week, being the first of the species to do so in Britain since a single chick at Brampton, Cumbria, in September 2015. At least one chick is thought to remain in one nest, as the site continued to be attended by up to six adults. Elsewhere, a wandering bird overflew Piltanton Burn, Dumfries & Galloway, on 21st. A glut of Caspian Tern reports from Norfolk (in the vicinity of Hickling Broad and brief individuals at both Breydon Water RSPB and Cley Marshes) perhaps refer to the same wandering individual. In Co Louth, the returning adult Ring-billed Gull was back at Blackrock on 21st, while the Forster's Tern continued at Soldier's Point. Bonaparte's Gulls at Oare Marshes, Kent, and Loch Spelve, Mull, Argyll, both remained. Last noted in June, the long-staying near-adult Azores Gull made a reappearance at Belmullet, Co Mayo, on 18th. We look set for a bumper Spotted Crake autumn, with birds at 11 sites – including six new individuals – a fine mid-August showing. On 16th, a surprise Corncrake sang at Nosterfield Quarry, North Yorkshire. In West Sussex, the Squacco Heron at Pagham Harbour lasted another week, with Purple Herons at Willington Wetlands, Derbyshire, and Stodmarsh NNR, Kent, also lingering. The first-summer Black-crowned Night Heron continued nearby at Oare Marshes, with an unringed White Stork back in Cambridgeshire. Unfortunately, an adult Pacific Golden Plover inadvertently photographed at Saltholme RSPB, Cleveland, on 19th would evade relocation – it is just the second Cleveland record following one as far back as 1995. A duo of American Golden Plovers would prove more obliging, present at Rosslare, Co Wexford, and North Ronaldsay, Orkney, while a probable flew south over Gibraltar Point, Lincolnshire.

Eurasian Dotterel were reported from eight sites and Temminck's Stints from three, with Pectoral Sandpipers split between four in England, one in Scotland and three in Ireland. Three White-rumped Sandpipers hung on, divided between Lincolnshire, Norfolk and East Yorkshire. Four Black-winged Stilts remained present and correct throughout at Doddington Pool, Cheshire; Red-necked Phalaropes were at Old Hall Marshes RSPB, Essex, and Wolla Bank, Lincolnshire. Juvenile Ferruginous Duck continued at both Daventry Reservoir, Northamptonshire, and Holme Pierrepont, Nottinghamshire, as did King Eider at Musselburgh, Lothian, and Basta Voe, Yell, Shetland. Now near-permanent fixtures to the avifauna of Britain and Ireland, the American Black Duck at Cross Lough, Co Mayo, and Pied-billed Grebe at Loch Feorlin, Argyll, were both recorded.

While it proved a largely quiet week across the region, the Azores scored its first Nearctic passerine of what is sure to be another busy autumn season with a male White-winged Crossbill at Nordeste, São Miguel, from 20th. Currently treated as a subspecies of Two-barred Crossbill, the two appear to be good candidates for treatment as separate species. Notably, this is just the fourth Western Palearctic record of the nominate subspecies, with the other three all occurring in Iceland (in 2017, 2018 and 2021).

In Spain, meanwhile, two Lesser Flamingos continued at Laguna de Fuente de Piedra and Western Reef Herons at L'Albufera de València and Platja d'Aro held on. Brown Boobies flew past both Muxía (on 14th) and Santander (on 15th), while, along the French border, an adult Laughing Gull flew west over Irún, Basque Country, on 19th.

A juvenile Lesser Kestrel that headed north-east over Lissewege, Belgium, on 18th made for a rare Belgian record. Elsewhere, the Wilson's Phalarope and Bearded Vulture both remained in The Netherlands. An adult Audouin's Gull was at Greifswalder Oie, Germany, on 21st, while the Bridled Tern remained on Île aux Moutons, France.