The easterlies of last week melted away into a run of north-westerlies across Britain and Ireland, which largely closed the door on the eastern excitement often hoped for by birders in mid-September. Nevertheless, some goodies managed to sneak through, with the east coast of Ireland boasting the week's biggest prize.

Co Dublin struck gold on 12th with the discovery of an Eastern Olivaceous Warbler at Howth Head. Just Ireland's fourth (or fifth) record of this Central Asian vagrant, its appearance just a short distance from the centre of Dublin meant it proved very popular indeed before its departure after 17th. All accepted Irish records hail from Co Cork (on Dursey Island in 1977 and Cape Clear in both 1999 and 2006), while one at Mizen Head, Co Cork, in 2009 remains unsubmitted. Another piece of surprising Irish news concerned the reappearance of the Double-crested Cormorant at Doon Lough, Co Leitrim, on 15th. Last winter, it remained a loyal visitor to the site until 16 April. Further exciting seawatching news from the south-west saw a Black-browed Albatross pass Predannack Head, Cornwall, on 12th, with likely the same bird off Prawle Point, Devon, on 18th. Great Shearwaters remain present in very healthy numbers for mid-September, with three-figure tallies off Co Cork including some 600 from a pelagic out of Cape Clear on 18th. Several double-figure counts were in the South-West Approaches, while smaller numbers continue to linger in the North Sea – birds were reported from East Yorkshire as far north as Orkney, where a locally significant count of 17 was made off North Ronaldsay on 18th.

In a less productive week for Cory's Shearwaters, birds were nevertheless reported from 10 sites, while a trip approximately 120 km off Co Cork produced five Wilson's Storm Petrels. Long-tailed Skuas were widely distributed along North Sea coastlines, including some double-figure counts off North and East Yorkshire.

Some icy north-western flavour was provided by a Hornemann's Arctic Redpoll on North Ronaldsay – an anticipated arrival given the airflow. Elsewhere, a Little Bunting continued at Loch of Vatsetter, Mainland Shetland, with another on North Ronaldsay. Opposite ends of Britain scored Bluethroats on 12th – Nanjizal Valley, Cornwall, and Out Skerries, Shetland – while unconfirmed Richard's Pipits were in Norfolk and Leicestershire. A classic Scilly double act saw a Greater Short-toed Lark and Ortolan Bunting share the tarmac on the runway on St Mary's for much of the week. Ortolan is rarely twitchable in Wales, so one at Lavernock Point, Glamorgan, on 19th was popular with those living within an hour or two. Four coastal English counties saw reports, with another sound-recorded over Wanstead, London, on 12th. 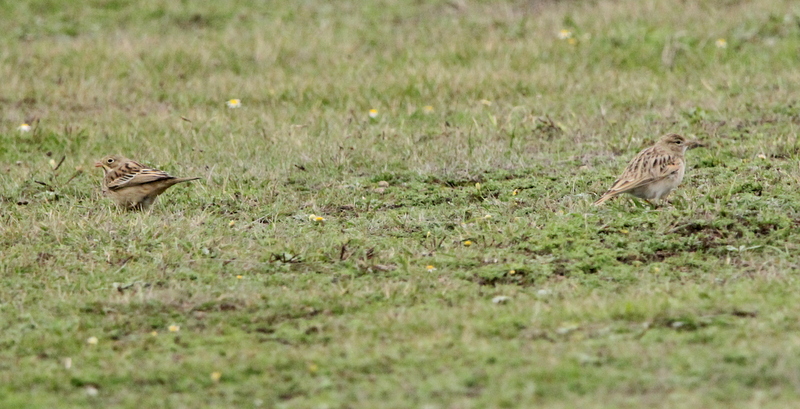 In Dorset, a tricky Citrine Wagtail at Lodmoor RSPB provided some head scratching. Its head pattern seemed to differ on its left and right sides, with the expected white ear covert border seemingly absent on its right side, although the head pattern on its left, large wing-bars, black-centred tertials and wholly black bill help to solidify the identification as Citrine. Two more were in Shetland, while birds in Cornwall and Co Cork lingered. Unconfirmed reports came from Lincolnshire and Isle of Wight. Arctic Warbler is a genuinely rare bird in Ireland, with one at Helvick Head on 18th being a first for Co Waterford. Other notable visitors to the 'Emerald Isle' included a Blyth's Reed Warbler on Skellig Michael, Co Kerry, an Icterine Warbler at Galley Head, Co Cork, and a Barred Warbler on Tory Island, Co Donegal. A decent week for Red-backed Shrikes saw the species reported from at least 16 sites, the majority in southern coastal localities. Outliers included birds at Filey, North Yorkshire, and Rutland Water, with four in the Northern Isles. In Hampshire, a Great Grey Shrike was at the regular wintering site of Latchmore Bottom on 16th. Wrynecks, meanwhile, were reported from at least 60 sites. The majority were in southern England, with five in Scotland and three in Co Cork. A mini-arrival of Rosy Starlings turned up four youngsters in England and two in Scotland, while fly-over European Bee-eaters brightened the skies of Suffolk, Dorset and Isle of Wight. Equally welcome was the reappearance of the European Roller at Bere Ferrers, Devon, on 19th. Five Hoopoes included twitchable birds in Devon, Anglesey and Highland; Red-rumped Swallow reports were received from Ventnor Downs, Isle of Wight, and Swineham Point, Dorset, with a probable on Lundy, Devon. Some three Great Snipe were trapped and ringed overnight on Fair Isle, Shetland, with the aid of a thermal imager during the week. Perhaps most notably, two of these were adults – returning to Britain having gone unseen in previous years, perhaps? Just 10 Great Snipe have now been ringed in Britain, with half of these caught on Fair Isle. Other island highlights comprised a Red-backed Shrike, Common Rosefinch, Glaucous Gull and two Lapland Buntings.

Otherwise, it was a quiet week on the shorebird front, with a juvenile Spotted Sandpiper on St Kilda, Outer Hebrides, on 18th highlighting. A probable Baird's Sandpiper was on Westray, Orkney, the previous day, with the young Lesser Yellowlegs at Dundalk, Co Louth, last noted on 12th. A decent week for Pectoral Sandpipers saw birds at 22 locations, most notably six at Caranavoodaun Turlough, Co Galway. Additional multiples were at Aldeburgh Marshes, Suffolk, Lough Beg, Co Londonderry, and Tacumshin, Co Wexford. A brief Buff-breasted Sandpiper dropped in at Sandwich Bay, Kent, with two continuing at Tacumshin, Co Wexford. In the Outer Hebrides, a pristine juvenile American Golden Plover – the first of the autumn – proved tough to pin down at Loch Paible, North Uist, on 17th, with adults at Seaforth, Lancashire, Cemlyn Bay, Anglesey, and Carrahane Strand, Co Kerry. Aberdeenshire boasted a brief Red-footed Falcon at Loch of Strathbeg RSPB on 13th. Another new bird was at Seasalter, Kent, while individuals lingered at Hickling Broad, Norfolk, and Marton Mere, Lancashire. A strong shout for a dark-morph Eleonora's Falcon overflew Heathrow Airport, London, on 14th; an unconfirmed report of a Short-toed Snake Eagle was received from Gaywood, Norfolk, the previous day.

A Purple Heron at Brockholes, Lancashire, on 19th proved disappointingly brief; the week's only other bird continued at Willington Wetlands, Derbyshire. Young Black-crowned Night Herons were at Nanjizal Valley, Cornwall, and Romsey, Hampshire, and Spotted Crakes were at five sites, while Skokholm, Pembrokeshire, hosted a Corncrake – the island's first 21st century record of this former breeding species. A rare Irish Common Crane report saw one fly south over Ballyquintin Point, Co Down, and the unringed White Stork was again at Stanway Green, Essex – photo analysis confirms it to be the same bird present in Cambridgeshire in recent months. In Co Cork, an Azores Gull was at The Gearagh on 12th, while an adult Franklin's Gull flew over Lissagriffin on 18th. An orange-billed tern species was reported from a boat off Newlyn, Cornwall, on 12th, while the regular Bonaparte's Gull lasted another week at Oare Marshes, Kent. In Shropshire, an immature Ring-billed × Lesser Black-backed Gull hybrid roosted at The Mere on 15th. The juvenile White-winged Tern continued to delight visitors to Longham Lakes, Dorset. Large numbers of returning Pink-footed Geese brought with them a Todd's Canada Goose, which was found at Marshside RSPB, Lancashire, on 17th. The first Ring-necked Duck of the autumn saw a drake at Loch Stiapavat, Lewis, and a female at Loch Leven, Perth & Kinross. A young drake Ferruginous Duck continued at Daventry Reservoir, Northamptonshire, and drake Surf Scoter were off both Rossbeigh, Co Kerry, and Gosford Bay, Lothian. The King Eider at Musselburgh, Lothian, remained, as did the American Black Duck at Cross Lough, Co Mayo, and Pied-billed Grebe at Loch Feorlin, Argyll. The northern coastal wetlands of Libya took the plaudits for the week's biggest prize, with an adult White-faced Whistling Duck shot at Ayn Az Zarga in recent days. Conclusively recorded just once in the region as a natural vagrant – a flock of 11 birds seen in Morocco – there are a number of records worthy of further consideration, including at least 15 reports from Spain. In Tunisia, meanwhile, belated news of an Abdim's Stork photographed at Ichkeul NP in late July looks to be the first record for the Western Palearctic.

An interesting Calonectris shearwater tracked past both Hönö and Mölle, Sweden, on 13-14th transpired to be a Scopoli's Shearwater – a national first. Amazingly, there is just one confirmed record of Cory's, with a number of either/or records. Later that day, it flew past several Danish sites between Gilleleje and Rørvig – becoming a national first there too – before heading north and settling off Skagen on 16-17th.

In Norway, Pechora Pipits were at Nesseby, Finnmark, and Husøy, Nordland, with a White's Thrush at Titran, Trøndelag, and a returning Richardson's Cackling Goose at Liminka, Finland. Sharp-tailed Sandpipers remained at Barbâtre, France, and Vigrestad, Norway. Departing the Norwegian far north, the Sandhill Crane flew south-west over Sannanlahti, Finland, on 17th. Iceland bagged a Tennessee Warbler in a Keflavík garden on 17-18th – the country's fourth.

The third Grey Phalarope for Belarus was near Minsk; three Crested Honey Buzzards flew over Batumi, Georgia, on 15th. A juvenile Greater Flamingo near Trnava mid-month was a first for Slovakia.

A juvenile Western Sandpiper at Trégunc, France, from 14-16th was unfortunately found dead with a number of commoner waders on the latter date – avian influenza was thought to be the culprit. A Paddyfield Warbler was trapped and ringed at Sint-Laureins on 15th, while, in the Channel Islands, a Siberian Stonechat was at Pleinmont, Guernsey, on 17th. A Sociable Lapwing was at Ulft, The Netherlands, with a juvenile Black-winged Pratincole at Twisk.

A Cape May Warbler starred on Corvo, Azores, on 16th. Two Great Blue Herons were on Corvo, with a singleton at Madalena, Pico. Another South Polar Skua flew past Estaca de Bares, Spain, with two Elegant Terns at El Puerto de Santa María.