With northerlies set in for most of the week, much of the land remained gripped by the icy tentacles of winter. One may have expected a visitor or two from the Low Arctic – and perhaps so it proved, when a possible Brünnich's Guillemot was reported off Weybourne, Norfolk, on 14th. It would evade confirmation, however.

That said, there was plenty of avian interest to make it worth piling on the layers and heading outside. Plaudits for the week's best find go to a Greater Yellowlegs along the River Bride just north of Tallow, Co Waterford, from 16th. This county first becomes the 16th on record in Ireland and just the fourth since the turn of the century. The latest occurred earlier this year, at Maynooth in landlocked Co Kildare at the end of July. It is not the first midwinter find in Ireland either – one was latest was present at Cahore Marsh, Co Wexford, on 18-19 December 2016. In Devon, an Olive-backed Pipit in a suburban Exmouth park proved a popular draw from 12th. Found by a local entomologist looking for aphids, this sprightly East Asian vagrant typically winters across southern Asia and Indonesia. Its occurrence in Britain in the middle of winter is a very rare occurrence indeed, with just a handful on record. Most recently, one spent three days on St Mary's, Scilly, in December 2019. Lothian's popular Black-throated Thrush remained a reliable visitor to its favoured yew trees in Haddington until 15th. As the views improved, however, so did the number of high-quality photographs, and with them the impression that something didn't look quite right. The bird appears to show a number of noticeable red patches in its plumage, seemingly at odds with what should be shown by a pure example. Most telling is the warm patterning in the undertail, which should be clean in Black-throated. While there may be nothing definitive to assign this bird to the 'hybrid' category, it seems likely that genes of a close relative – perhaps Naumann's Thrush – form some part of its life history. Another first-winter male – apparently lacking rufous tones in the flanks and undertail coverts – was in a garden at Dunblane, Forth, from 16th. Just up the road, the Stejneger's Scoter remained at Aberlady Bay, Lothian, although could be elusive at times amid distant scoter flocks. Scanning the coast anywhere between Fernyness and Gullane Point might yield a result. Two Surf Scoter – an adult drake and an adult female – accompanied Lothian's mega-rare visitor, while three were again off the Conwy coast. King Eider lingered in both Cleveland and Shetland and the adult drake Hooded Merganser continued to reside at Rosduane, Co Mayo. Two unconfirmed Pacific Diver reports were received from Cornwall – at Cudden Point on 13th and Gerrans Bay on 17th – and a White-billed Diver was off Leebitten, Mainland Shetland.

An impressive total of four Ferruginous Duck were confirmed in Norfolk this week – two drakes and two females – all favouring the Trinity Broads of Filby, Rollesby and Ormesby. A new arrival in Fife concerned a first-winter drake Lesser Scaup at Kinghorn Loch from 14th, while another lingered in the Outer Hebrides at West Loch Ollay, South Uist. Eight new Ring-necked Duck were unearthed, most notably three at Wellington GPs, Hertfordshire, on 17th.

Hampshire's last American Wigeon predates the turn of the millennium, making a drake at Pennington Marshes from 15th a pretty big deal. Others were at White Sands, Lothian, and Big Waters, Northumberland. Green-winged Teal at 10 sites included new birds in Oxfordshire, Forth and Argyll, and the Ruddy Duck (thought likely to be an adult female) was still on Cross Lough, Co Mayo, until mid-week at least. Smew at 30 localities included a redhead in Ireland at Lough Beg, Co Londonderry.

It was a good week in Lancashire for vagrant Branta. Most notable was an apparent Lesser Canada Goose with Pink-feet at Aldcliffe Marshes from 16th, while a Todd's Canada Goose was again at Banks Marsh. Elsewhere, a Richardson's Cackling Goose-Todd's Canada Goose double-act were again with Greenland White-fronted Geese near Campbeltown, Argyll, on 17th.

Presumed small race Canada Goose at Aldcliffe, Lancaster this lunchtime, found by @joncbirder. @DarbyBug know you've found a few of these, any thoughts on this one? @LDBWSnews pic.twitter.com/tF22YYmmVV

At least five Grey-bellied Brant were spread across the Dublin suburbs on 13th, with Black Brant still in Suffolk, Essex and Hampshire. Otherwise, two Snow Geese of unknown origin were at Lady's Island Lake, Co Wexford. Just six Bewick's Swans wintered in Ireland last year, leaving the species on the precipice as a regular winter visitor. Amazingly, this tally more than doubled this month to 13 at Tacumshin, Co Wexford, on 11th, reducing to nine by the week's end. An unseasonal Eurasian Stone-curlew made for a midwinter surprise on St Mary's, Scilly, on 16-17th. Lingering rare shorebirds comprised the Kentish Plover at Burnham-on-Sea, Somerset & Bristol, and Long-billed Dowitcher at Titchwell RSPB, Norfolk, while a Eurasian Dotterel was near Ash, Kent. The popular Arctic Skua from St Aidan's RSPB moved to Pugney's CP, West Yorkshire, on 13th before heading further south still to Draycote Water, Warwickshire, the following day. Small numbers of Little Auks continued to be seen off North Sea seawatching sites as far south as Norfolk. Even more notable were garden finds at Kingston Park, Northumberland, and Donaghadee, Co Down, while one was off the south coast at Durlston CP, Dorset. Four Ring-billed Gulls were split between Cornwall, Clyde, Co Cork and Co Kerry, although it was another poor week for both Glaucous and Iceland Gulls. An adult Bonaparte's Gull was still at Ballygalley, Co Antrim, while a possible adult Laughing Gull was reported with Kittiwakes off Sennen Cove, Cornwall, from 12-14th. Sneaking under the radar somewhat while much of England remained gripped in snow was Nottinghamshire's first record of Dartford Warbler. Two in fact – an adult male and first-winter – in riverside fields between Thrumpton and Barton-in-Fabis from 15th. While the species is prone to localised movements, it is rare to see one reach this far north. Neighbouring Derbyshire enjoys two records – most recently at Pride Park in 2005 – with other past occurrences including several reports from Yorkshire, Cheshire and Cumbria. Eurasian Penduline Tits were split two apiece at Elmley NNR, Kent, and West Rise Marsh, East Sussex, with a singleton photographed at an undisclosed site in the Somerset Levels. Hertfordshire's first Great Grey Shrike since 2016 made a brief visit to Redbourn on 13th. Another remained at Pig Bush, Hampshire, while Little Buntings held on at Worcester Park, Surrey, and Cot Valley, Cornwall. Small Waxwing numbers remained spread across eastern and central areas of Britain as far south as Kent, while smaller numbers began to percolate westwards – reaching Cheshire, Lancashire and Shropshire for the first time of this influx. Northern Ireland's contingent, meanwhile, increased to three with an additional bird at Ballycastle, Co Antrim. Shore Larks were at three sites, a Richard's Pipit flew south over St Mary's, Scilly, and the Eastern Yellow Wagtail persisted at Loch of Wester, Caithness. A young Rosy Starling was in a garden at Wiveliscombe, Somerset & Bristol, from 14th; the same day saw a brief Hoopoe at Bridlington, East Yorkshire. When the (presumed) final male Lady Amherst's Pheasant from the once-extensive British feral population gave its final lonesome calls at Millbrook Proving Ground near Lidlington, Bedfordshire, in mid-2016, so did the possibility to see this attractive East Asian resident in Europe. Or so it seemed. On 18th, one was reported in woodland near Flitwick, just 6 km from the species' last haunts in Britain. The chance of such a distinctive species managing to remain unseen in Central England for over six years feels highly improbable, but not impossible. That said, escapes are rife and the overriding odds must be on this latest example being an altogether more recent release. 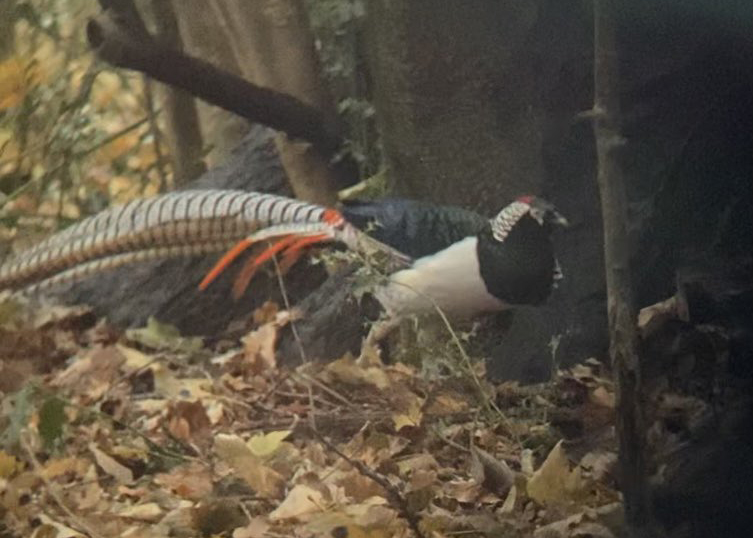 Thus far, it has proved a rather bleak winter for Rough-legged Buzzard sightings. Just three were reported this week, split between Farthingloe, Kent, Gramborough Hill, Norfolk, and Birsay Moors RSPB, Mainland Orkney. The young female Pallid Harrier was again at Warham Greens, Norfolk, while a probable report was received of the Cornish example back at Trevescan. Glossy Ibis were at six sites; a wayward Common Crane wandered the Cornish coast between Porthcurno and Polgigga.

Following an exceptional autumn showing of Nearctic landbirds, it was only a matter of time before a wintering individual or two made themselves known. It was Swedish birders who would be the beneficiaries on this occasion when the country's first Baltimore Oriole was discovered in a garden at Förslöv from 11th. Just a short distance away, a Stejneger's Scoter lingered off Båstad, while a Blue-winged Teal was new-in at Lund and a Pine Bunting was still at Nordanås. A drake Baikal Teal highlighted in Norway at Bryne, just the nation's fourth record. Otherwise, a second-winter American Herring Gull was at sea off Ålesund on 11th, with both the American Buff-bellied Pipit at Hvasser and Eastern Black Redstart at Vestbygd lingering. In Denmark, a Black Scoter was off Dragsmur.

After its recent visit to southern England, the Walrus nicknamed 'Thor' was back at Dieppe, France, mid-week. Meanwhile, a young American Herring Gull graced a waste treatment centre near Gueltas, Bretagne, and the Long-legged Buzzard continued at Thibie. The Sandhill Crane resurfaced at Étang de la Horre on 13th, with the Forster's Tern reappearing at Le Curnic on 17th.

A first-winter Pallas's Gull was at Jeziorsko, Poland, and a Pacific Golden Plover was at Łączany. A pair of rare scoter – a Black Scoter at Wladyslawowo and a Stejneger's Scoter off Krynica Morska – both remained. Elsewhere, a Pine Bunting accompanied Yellowhammers at Agnellengo, Italy, while a Pin-tailed Snipe at Milleyha Wetland on 18th was just the second Turkish record. Two apparent Mountain Chiffchaffs trapped and ringed at Kfar Ruppin fishponds on 15th would become the second and third records for Israel if accepted. At least five Swinhoe's Storm Petrels remained off the Eilat coastline, with a Verreaux's Eagle still in the Eilat mountains at Nahal Atek.

The drake American Black Duck continued at Sada, Spain; just a short distance away at Pontedeume was a drake Wood Duck of unknown origin. A wintering Pacific Golden Plover was again at Ebro Delta and a Lesser Flamingo visited Coto Doñana. Two Lesser Crested Terns were noted – at Málaga and Torrevieja – and the American Herring Gull was again at Muxía.

In the Azores, Cabo da Praia played host to two Least Sandpipers alongside a Semipalmated Plover, Blue-winged Teal and two American Wigeon. Remaining on the island were an American Coot at Lagoa do Junco and a Great Blue Heron at Praia da Vitória. A Double-crested Cormorant was at Madalena, Pico, while mainland Portuguese birders enjoyed an adult American Herring Gull at Sesimbra.