The continuing Eurasian Crag Martin in Chesterfield, Derbyshire, once again took top billing this week, although most thought it had gone following negative news all day on Wednesday and nothing at all on Thursday. But early on Friday an unconfirmed report surfaced, via social media, suggesting that the martin had reappeared on Thursday afternoon. 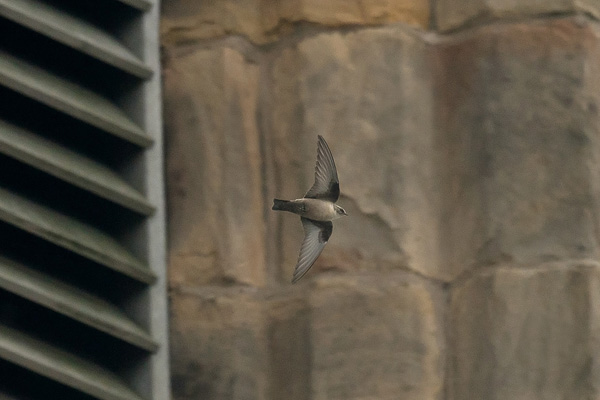 A few hours later this had been confirmed and, all of a sudden, the prospect of a large-scale weekend twitch looked altogether more realistic. Sure enough, the martin obliged throughout Saturday and was relocated at Chesterfield Football Club's Proact Stadium that afternoon, appearing to go to roost there. Settling into a pattern of visiting both the football stadium and spire, the bird continued to roost daily at the former and make occasional forays to the latter throughout the day, the often poor weather conditions this week seemingly not putting it off. One wonders how long it'll stay around, though the mild weather presumably means insect food is available — perhaps the first cold snap will see it move on? 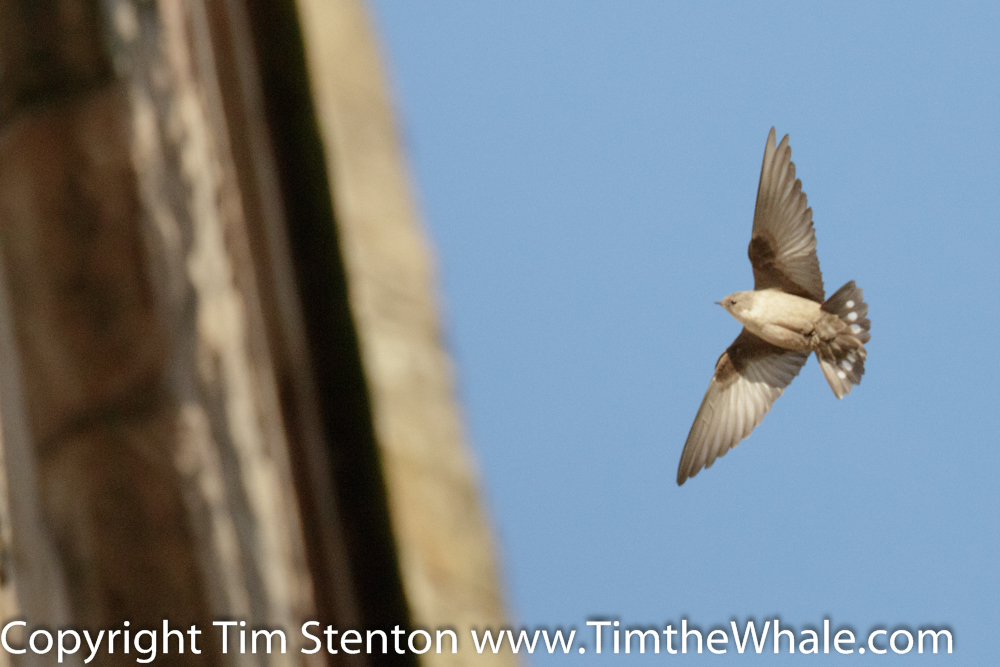 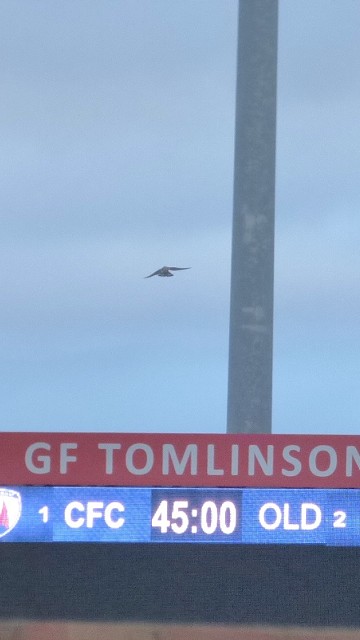 The week's stormy conditions produced two juvenile Surf Scoters at opposite ends of the country — following one off Cleat, Barra, on 13th, Somerset's first ever was found off Blue Anchor on 15th and remained to 17th. It's been a very poor year for Leach's Storm-petrel records, so the 30 reports received from 12th onwards was the best showing of 2015. Numbers were never spectacular: most sites dealt in ones and twos, with the Bristol Channel typically claiming the greatest numbers as the Somerset, Gloucestershire and Glamorgan coastlines produced several apiece. 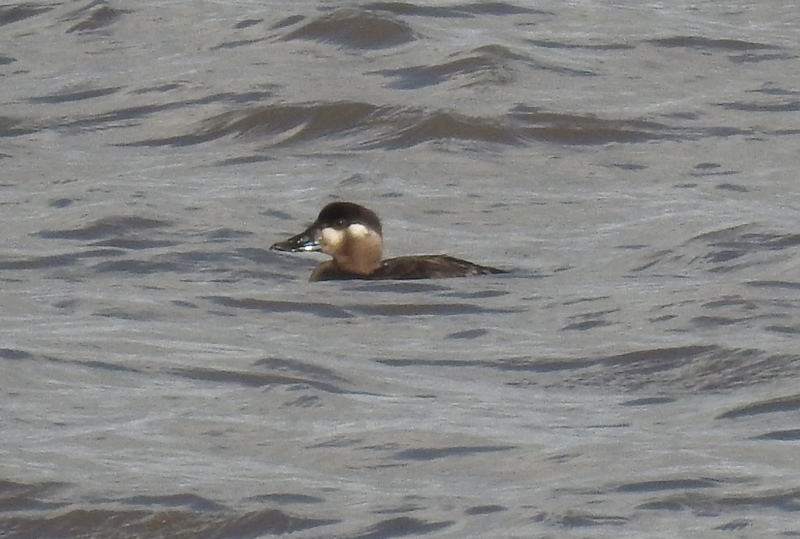 Gwent's first-ever Black Guillemot was very much a turn up for the books, glimpsed distantly off Goldcliff Point and then later well twitched at Black Rock after a brief interlude off Severn Beach, Glos. Otherwise it was a light scattering of inland Great Skuas and Great Northern Divers that attracted the headlines on the seabird front, with coastal locations also scoring the odd Pomarine Skua and Sooty Shearwater. 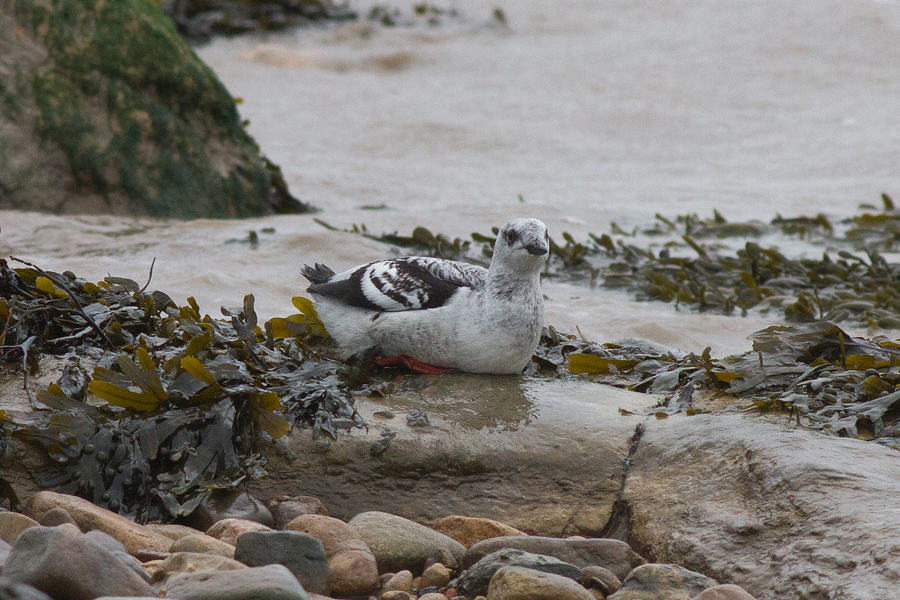 The succession of transatlantic weather systems produced a hat-trick of new Lesser Scaup: a young drake at Loch of Houlland, Shetland, on 12th relocated to Loch of Benston on 15th, another first-winter male was identified on St Mary's, Scilly, on 14th after having turned up the previous day, and a female arrived on Tiree, Argyll, on 16th. A drake at Chew Valley Lake, Somerset, from 12th is presumably the usual bird moving from Glamorgan. A female Ring-necked Duck was still at Wexford Wildfowl Reserve, and drakes remained in Pitlochry, Perthshire, and at Kinnegar Pools, Co Down; another probable male was at Loch of Skene, Aberdeenshire, on 12th. 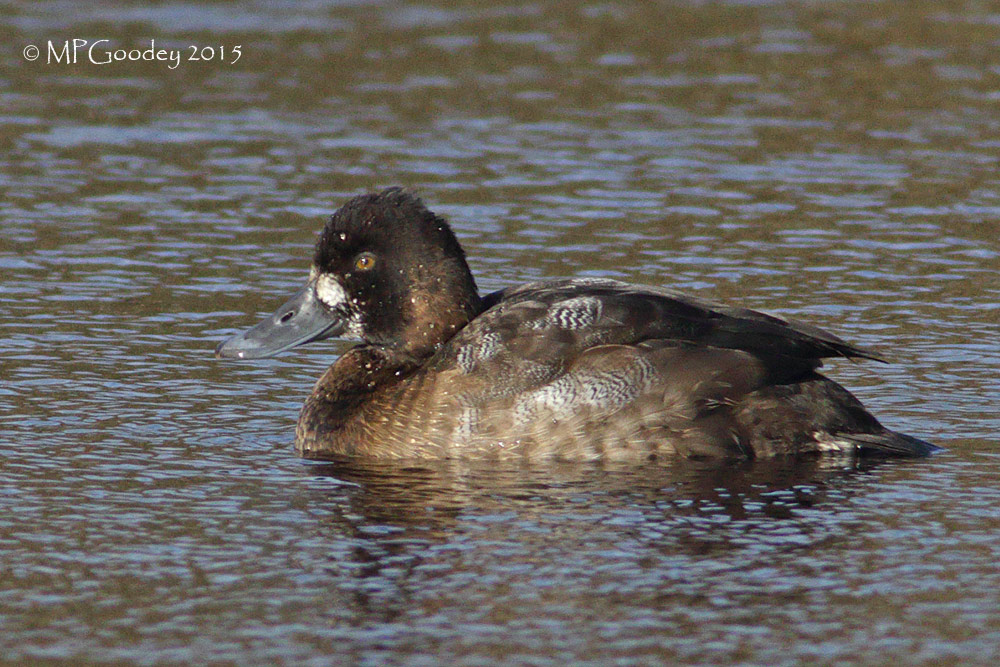 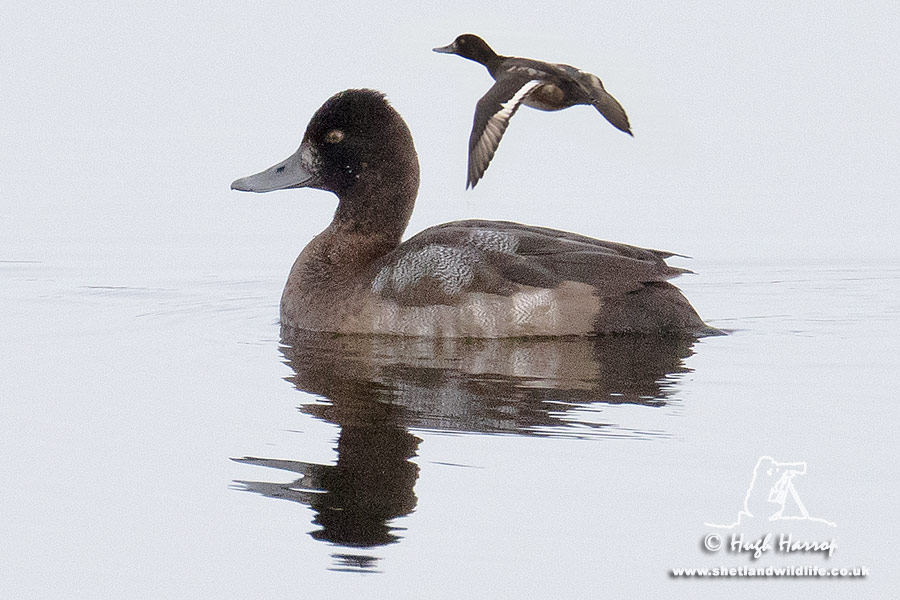 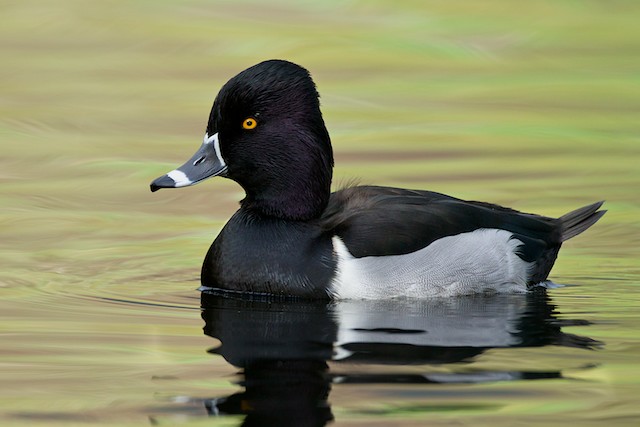 Aside from the two new arrivals listed above, the only drake Surf Scoter was that remaining off the Lothian coastline. The unringed Ferruginous Duck continued to cavort with its captive congeners at Washington WWT, Durham, to 14th. Drake Green-winged Teal continued at Caerlaverock, Dumfries & Galloway, and on North Ronaldsay, Orkney, while a third individual was found at Loch of Lintrathen, Angus, on 17th. Two drake American Wigeon were found on 17th — near Campbeltown, Argyll, and at Loch Portain, North Uist — but the only bird to linger from previous weeks was the drake still on Tiree.

The white-morph Snow Goose was at Skinburness, Cumbria, on 16th, with others near Loch Eye, Highland, on 11th and 16th, at Loch of Strathbeg, Aberdeenshire, on 14th and reportedly at Wexford Wildfowl Reserve on 12th. On Shetland the young Lesser White-fronted Goose from the Swedish reintroduction scheme remained near Ringasta. The Ridgway's Cackling Goose was seen again in Dumfries & Galloway on 13th and 16th and a Richardson's Cackling Goose was still on Islay, Argyll, on 15th. A Cackling Goose was also noted in Hampshire, seen on the Lower Test Marshes on 11th and then nearby at Redbridge on 16th. A Todd's Canada Goose was with a Co Sligo Barnacle Goose flock from 12th. Five or six Black Brants were seen between Dorset and East Yorkshire. 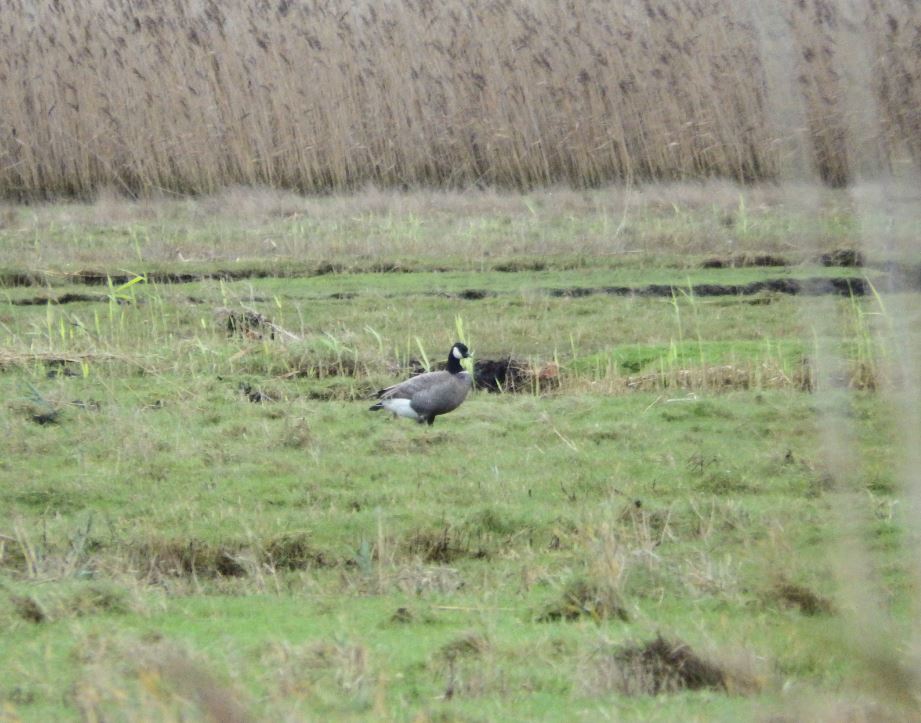 The rate of new Glossy Ibises appearing has calmed considerably, but one was discovered at Felbrigg Hall, Norfolk, nonetheless, being present from 13th. Elsewhere birds continued at Seaton Marshes, Devon, to 13th and at Northwick Warth, Glos, all week. 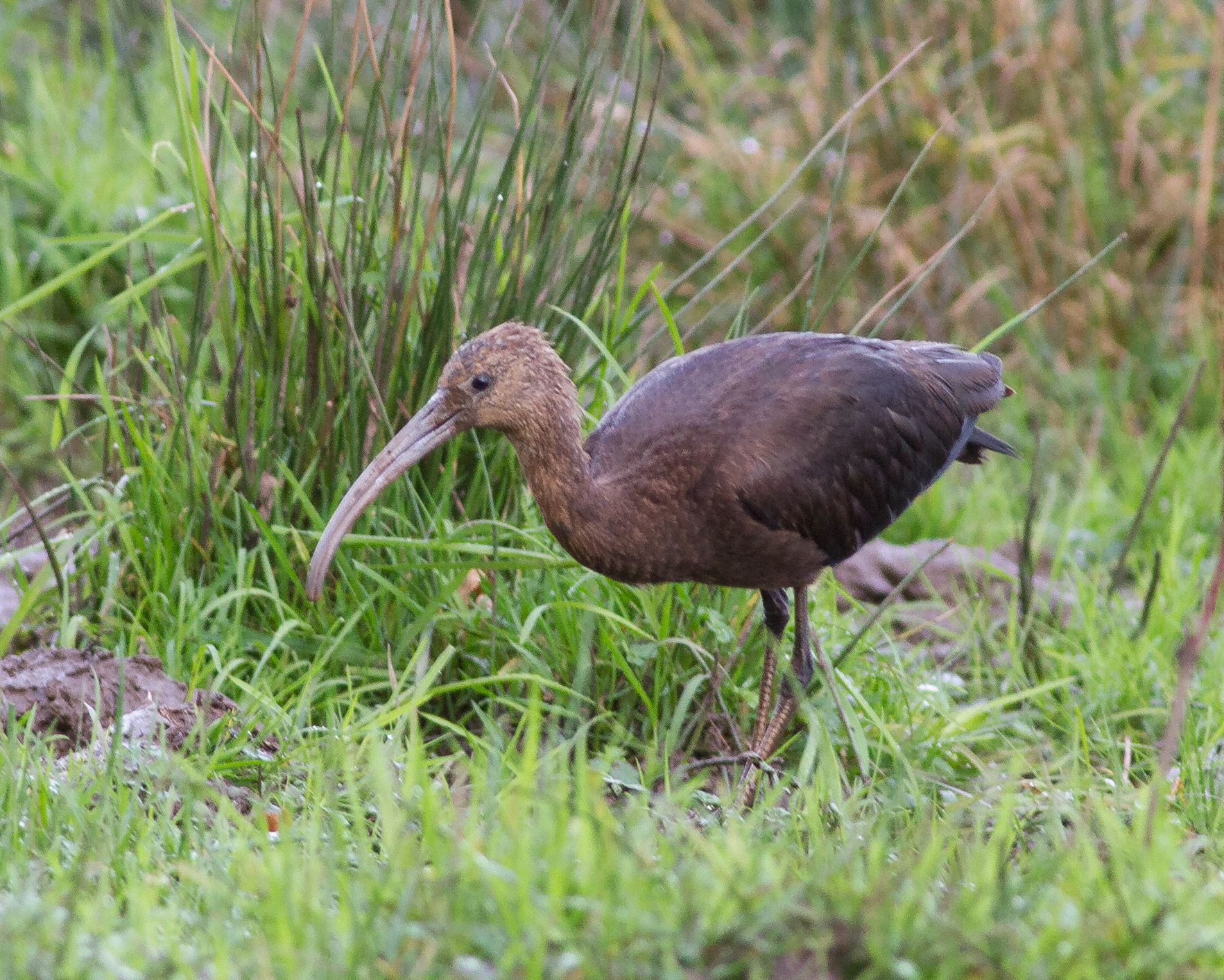 Three Cattle Egrets remained near Aveton Gifford, Devon, to 12th, with perhaps the same birds back at Teigngrace from 13th. Another was near Wadebridge, Cornwall, on 16th and the long-stayer was still at Shapwick Heath, Somerset. Great White Egrets were reported from over 40 sites, with counts of four together in Kent, Somerset and Northamptonshire.

Following a report of a Pallid Harrier flying east past Titchwell, Norfolk, on 12th, a juvenile appeared at Warham Greens, Norfolk, from 15th; it or another was photographed at Snettisham mid-morning on 17th. Another juvenile drifted past Seaton Snook, Cleveland, late in the morning on 12th and, although brief, was well photographed. After a four-day absence, the male Northern Harrier was back on North Ronaldsay, Orkney, on 17th; in the interim, there was a report from Loch Watten, Highland, on 15th — the same bird perhaps? Rough-legged Buzzards were reported from seven sites between Highland and Kent. 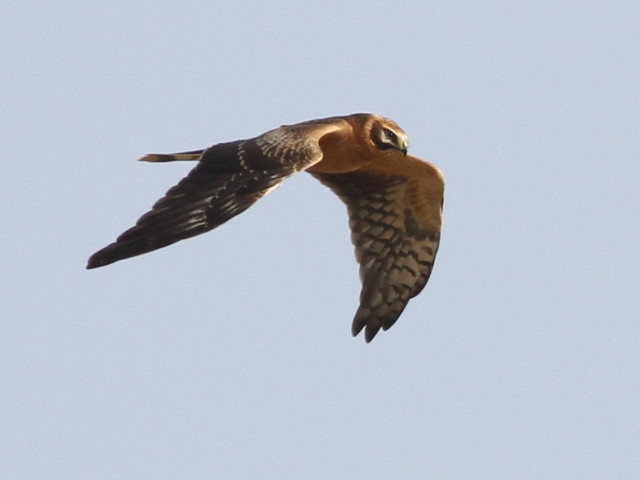 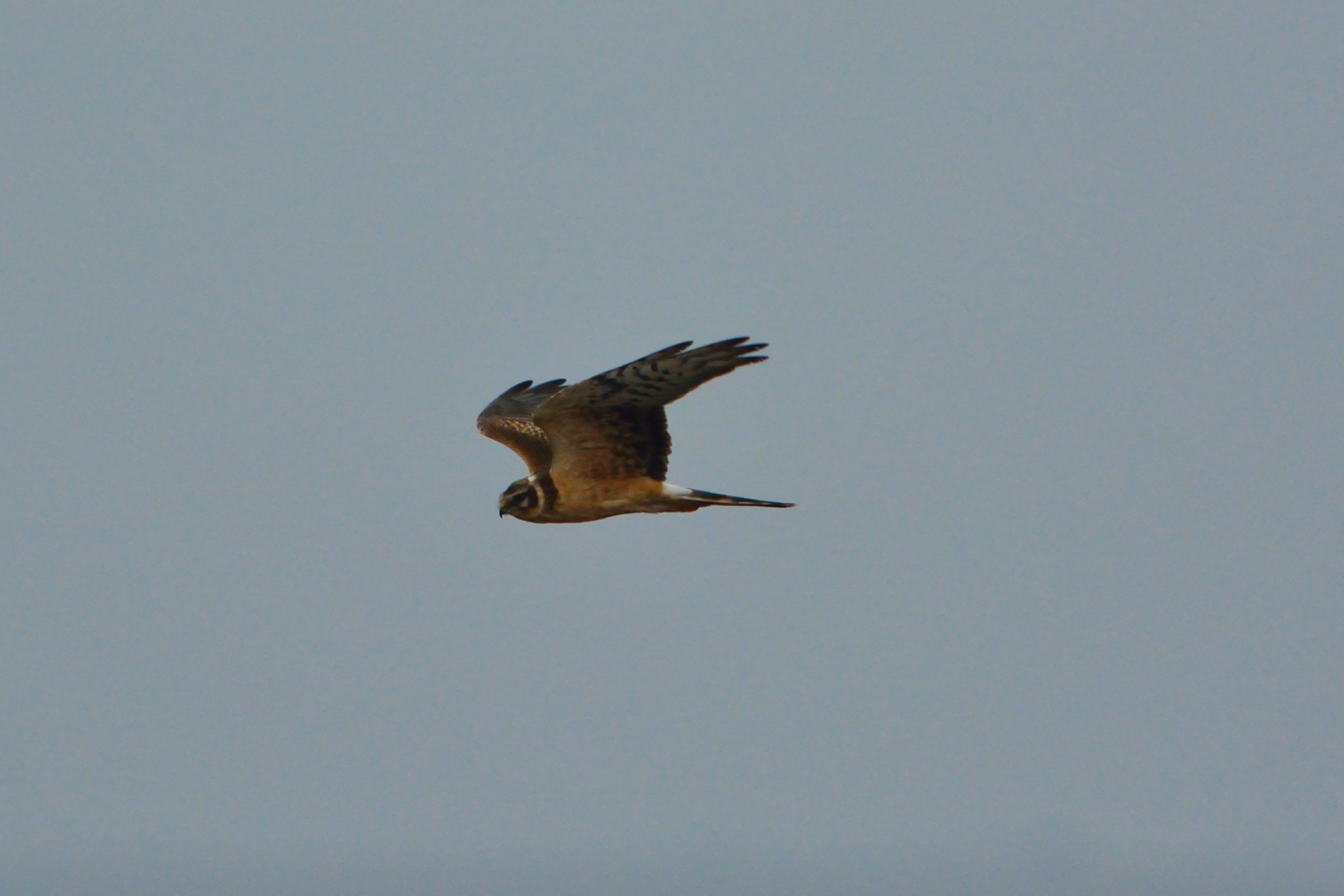 A juvenile White-rumped Sandpiper arrived at Musselburgh Lagoons, Lothian, on 12th and lingered to 14th, when it was apparently taken by a Sparrowhawk. A similar fate befell the Worcestershire Red-necked Phalarope in the early morning on 11th, although the bird at Hollesley Marshes, Suffolk, was at least still alive when it was last seen on 12th. Grey Phalaropes were seen at 14 sites and included eight past Bridges of Ross, Co Clare, on 13th.

The first-winter Long-billed Dowitcher was at Cresswell Pond, Northumberland, all week, and another was found near Killorglin, Co Kerry, on 11th. Rare shorebirds were otherwise scant; neither yellowlegs was reported and a juvenile American Golden Plover at Aillebrack, Co Galway, on 13th was the only one seen this week. 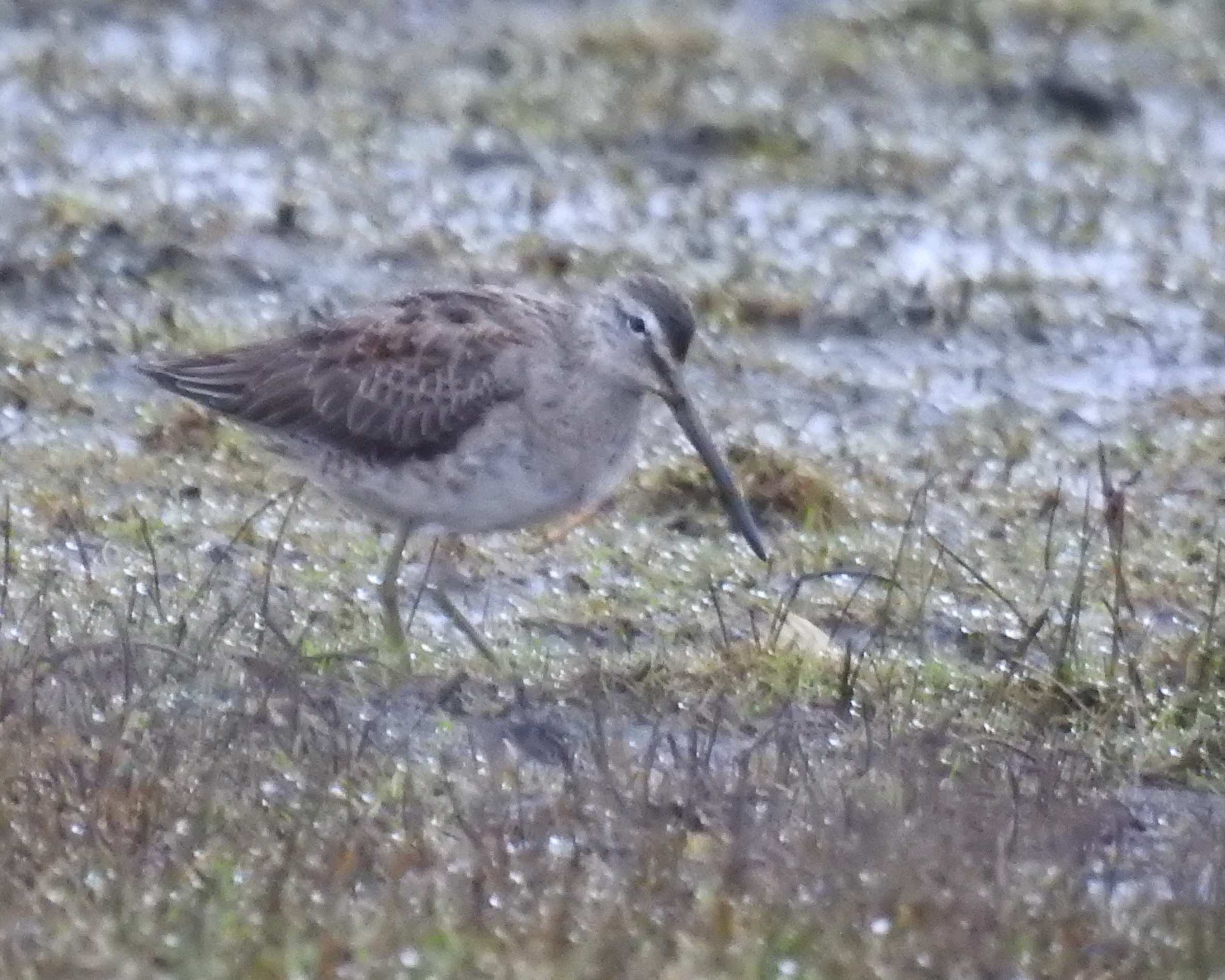 The Gull-billed Tern appears to have finally moved on from Blennerville, Co Kerry, but that Galway stalwart — the adult Forster's Tern — was seen again at Kinvarra on 15th. An adult Bonaparte's Gull was in that county at Rusheen Bay on 13th, and the Devon bird was again at Dawlish Warren on 14th. The third-winter American Herring Gull was again at St Just, Cornwall, on 16th.

What is presumably last winter's Ring-billed Gull returned to Blashford Lakes, Hants, from 14th; at least one first-winter arrived in Cornwall, with records from Drift Reservoir and Sancreed on 15th and Penzance on 16th. Other records came from Carrickfergus, Co Antrim, on 15th and Cruisetown Strand, Co Louth, on 16th. Iceland Gulls were primarily restricted to the far north and west, although a juvenile was in the roost at Bartley Reservoir, W Mids, on 16th. Only a handful of Glaucous Gulls were noted.

A Hoopoe was a nice find in Crostwick, Norfolk; first reported on 13th, that was apparently its fourth day in the vicinity and it was still there at the end of the week. Waxwings remained scarce, with two reported in Ballyclare, Co Antrim, on 11th and another duo at Bowmore, Islay, Argyll, on 13th. 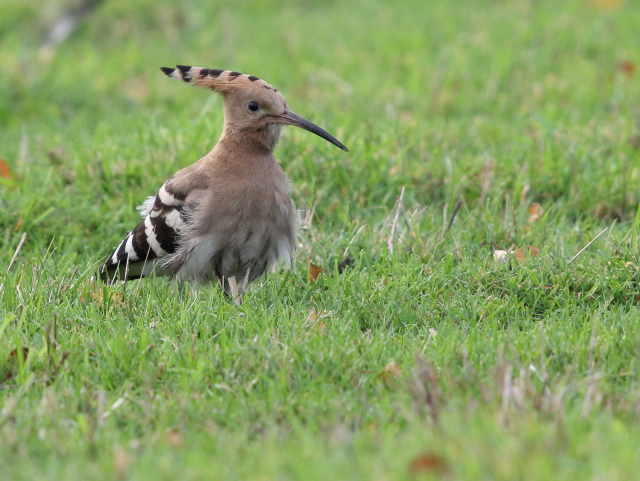 An Olive-backed Pipit was a surprise find at Sandy Point, Hants, on 12th but was not seen subsequently. The only Richard's Pipit was at Sumburgh Airport, Shetland, on 15th, while a Red-throated Pipit was reported over Carsington Water, Derbys, late morning on 13th. Shore Larks were briefly at North Foreland, Kent, and Spurn, E Yorks, on 12th.

Cumbria's second Desert Wheatear, a smart male, was found at Eskmeals reserve on 16th and was still present the following day.

A Dusky Warbler was found at Dungeness RSPB, Kent, on 16th and remained till 17th, though it was extremely elusive. The Pallas's Warbler was last seen at St Levan, Cornwall, on 11th, while seven Yellow-browed Warblers included a bird at Dudley, W Mids, from 15th.

The Red-breasted Flycatcher remained at Brownstown Head, Co Waterford, to at least 15th. A male European Serin at Beddington Farmlands on 15th was just the fourth for Surrey (and the first since 1986). A first-winter Rose-coloured Starling was reported from Howth, Co Dublin, on 17th. At least 17 Great Grey Shrikes were reported, most of which were in England — the exceptions being birds at Loch of Lintrathen, Angus, on 15th and two reports from Wales. 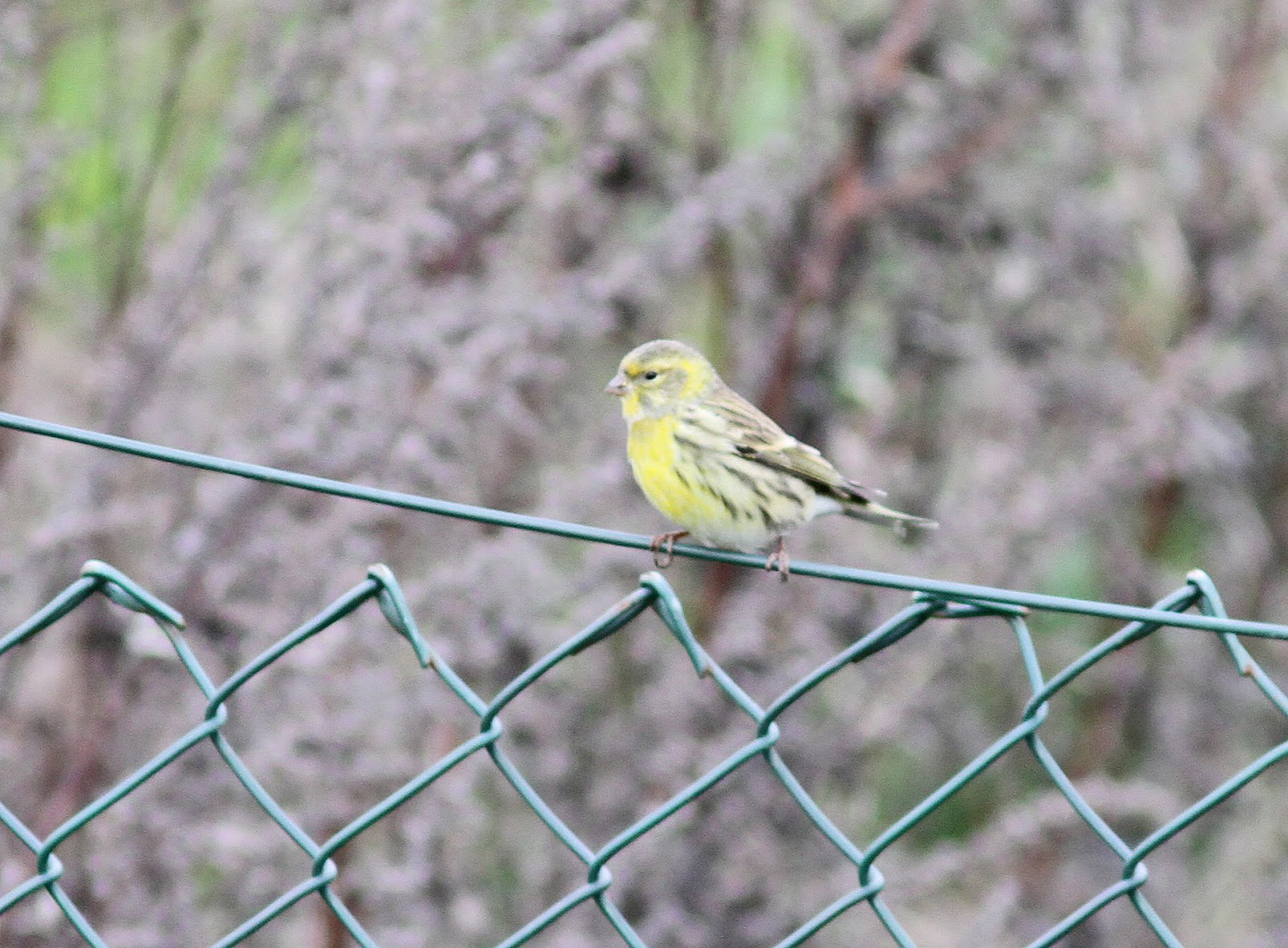 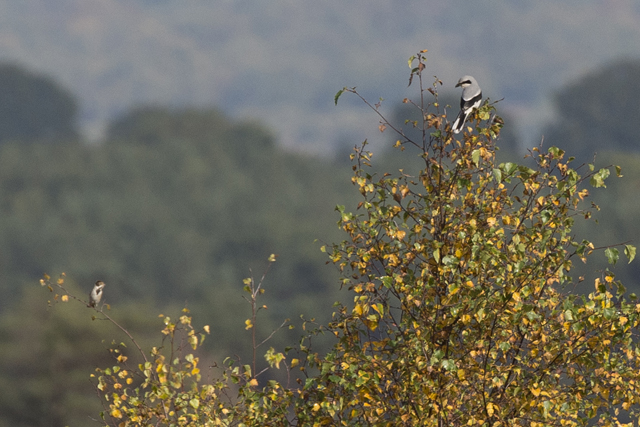 In the Netherlands, the continued presence of the Black-winged Kite at Kootwijk, Gelderland, all week tantalised British birders, though the Belgian bird was last seen near Doel on 12th — the former was no less than the fifth to be recorded in the Netherlands in 2015 and the latter, having crossed into Dutch airspace on occasion, represented the sixth! Surely a British record is not far away? 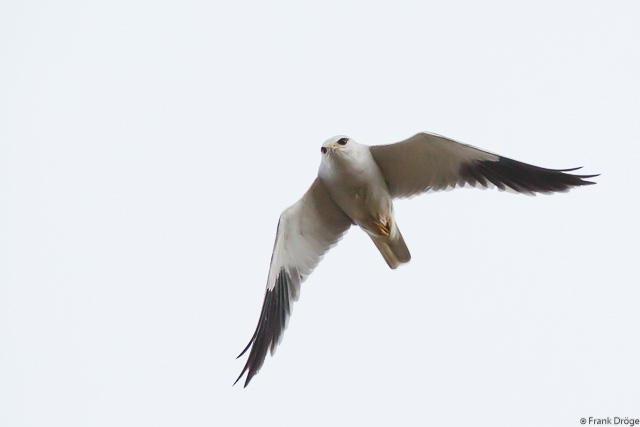 Similarly teasing were a couple of stunning Asian Desert Warblers. The third for the Netherlands proved absurdly tame on Terschelling from 13th; though its behaviour — coming to within inches of gathered birders — might have suggested it was ill or exhausted, it seemed perky enough and was still surviving there on 17th. Another showy bird at Rakke, Vestfold, from 12–15th represents the first record of this species for Norway. 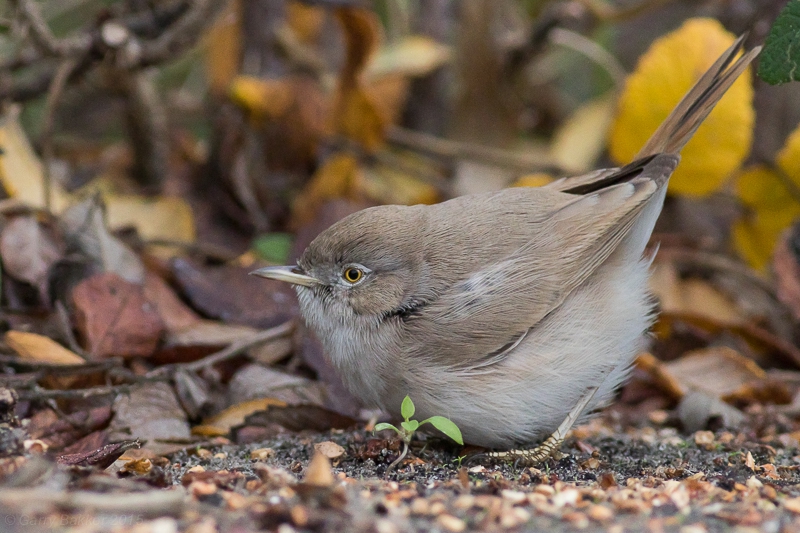 An American Coot was found on São Miguel, Azores, on 11th, and the Belted Kingfisher was still on Terceira early in the week. An Eyebrowed Thrush was unfortunately found dead in Reggio Calabria, Italy, on 11th.