The streets of Sheffield, South Yorks, are well known among local birders as fruitful gull-watching soil in winter. The rooftops in the Effingham Street area provide a perfect chill-out zone for larids brushing up in the River Don after servicing nearby waste management facilities. Diligent scanning through the mid-summer hordes can of course offer occasional local morsels but the discovery of a second-summer Audouin's Gull next to Norfolk Bridge on 13th was nothing short of stupefying. On acceptance, the bird will represent the eighth British record of this most graceful marine specialist and certainly the wackiest. There was a two-hour window of opportunity to catch up with it before it was spooked by fireworks later that evening. Thankfully, for those who made the effort, it did show again first thing the next morning, before it was lost to sight and never seen again. Late news of an apparent first-summer Baltic Gull during our previous review period, on 9-10th, makes this month something of a purple patch for the gulling scene in Sheffield; it even bore a ring from a mainly fuscus colony in northern Norway. 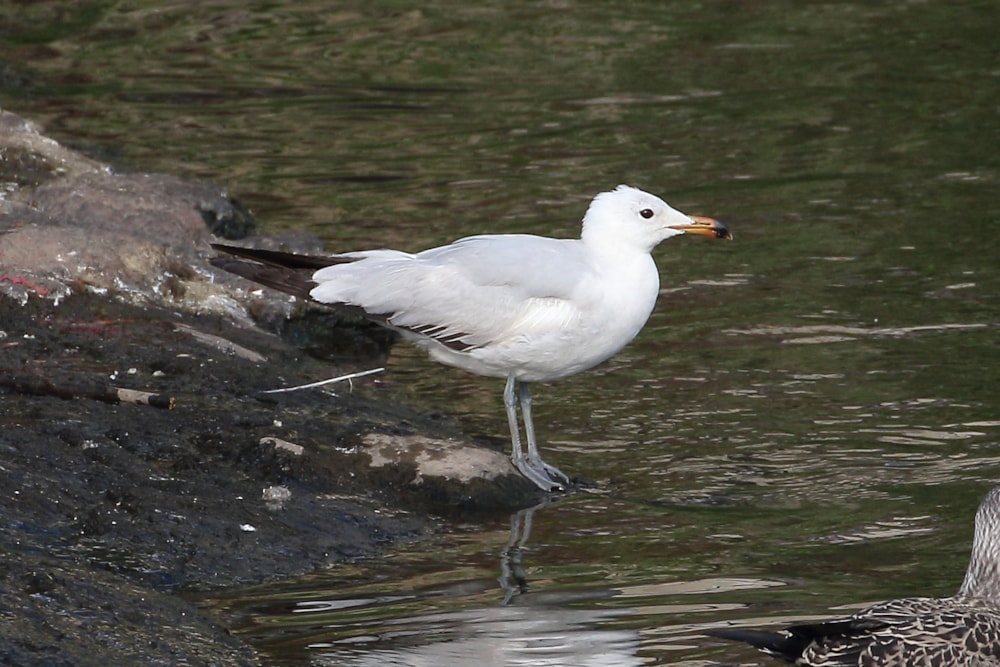 Not quite so rare as the Audouin's but arguably more attractive, and definitely more co-operative, was an adult male Greater Sand Plover around Easington, East Yorks – Britain's 23rd on acceptance. The first in Britain since 2012, it was first encountered on the beach near Beacon Ponds on the evening of 14th. It showed nicely the next morning until it was pushed to The Narrows at Spurn mid-morning by a Peregrine Falcon. Thankfully, it eventually returned to its favoured area of beach for the rest of the day, although it then vanished overnight. Appearing this week as an also-ran, an adult male Pacific Golden Plover in its dapper summer attire graced Poulaphouca Reservoir, Co Wicklow, from 11-13th before moving on. 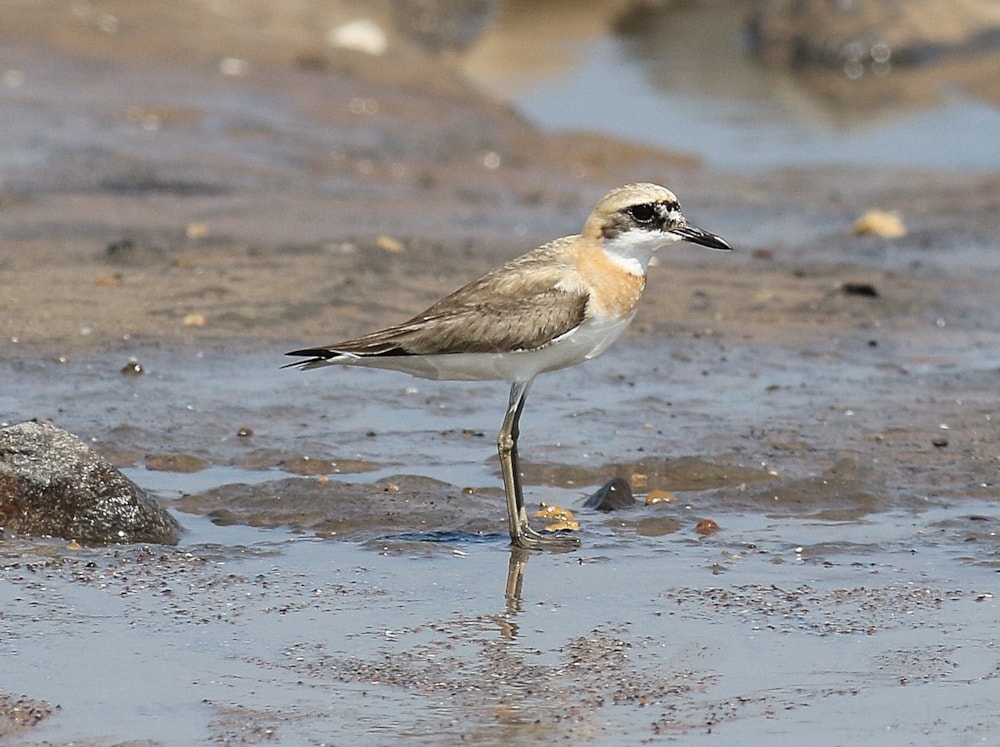 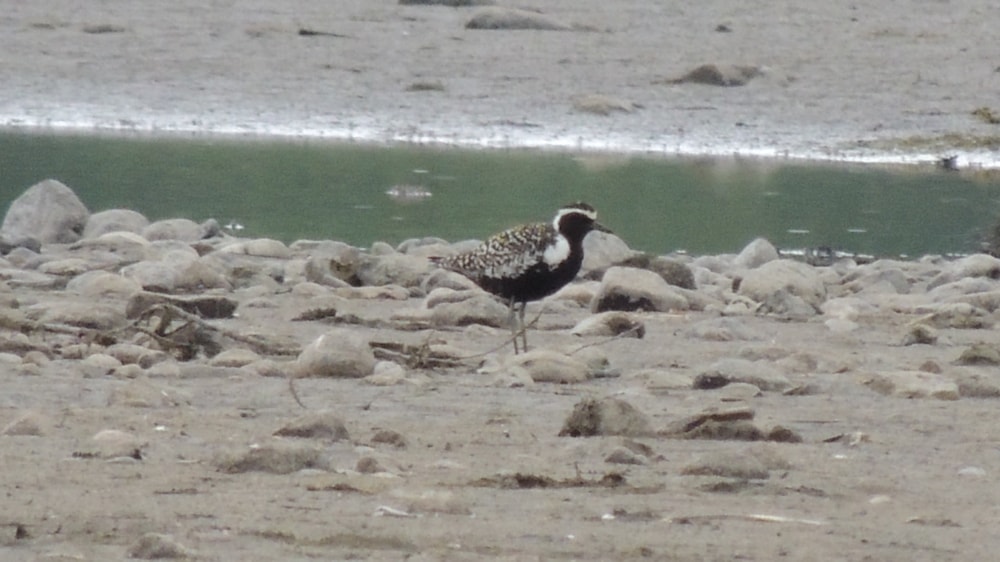 On the Outer Hebrides, last week's Snowy Owl was still at Carinish, North Uist, on 11th before resurfacing further north on the island, at Sollas, on 15th. Even more remote, the St Kilda female was seen again on Hirta on 12-13th. The adult female Montagu's Harrier materialised once again at Blacktoft Sands RSPB, East Yorks, on 16th.

A low Black Stork over Thorngumbald, East Yorks, was a tantalising sighting on 15th; another report over Anstey, Leics, two days later surely related to the same individual. Shropshire's male Little Bittern was a popular attraction at Chelmarsh Reservoir till its last day on 13th. Patient hopefuls were rewarded with at least an earful of its peculiar croaking or perhaps a flight view, and with a bit of luck the bird would oblige by sitting nicely in the reedbed. A sighting of a Purple Heron at March Farmers, Cambs, on 14th was taken to be the same as the same elusive bird seen there on 12 June. At Poole Harbour, Dorset, a juvenile Purple Heron flew over Littlesea on the evening of 16th, and was seen again late the next day. A Glossy Ibis turned up at Rutland Water on 16-17th and others were at Hickling Broad, Norfolk, on 14th and Matford Marsh RSPB, Devon, on 17th. 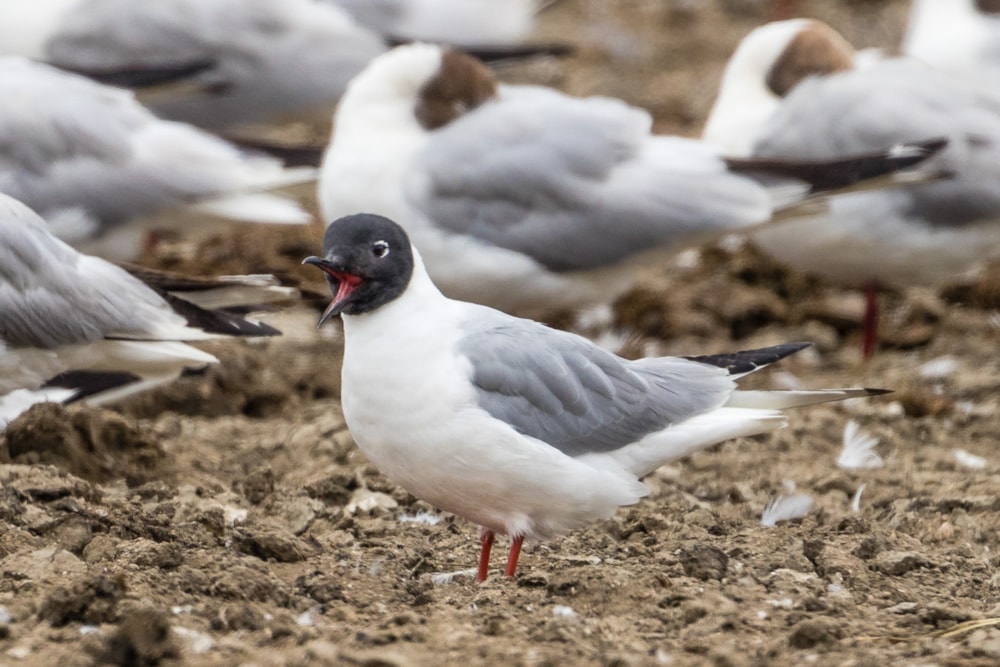 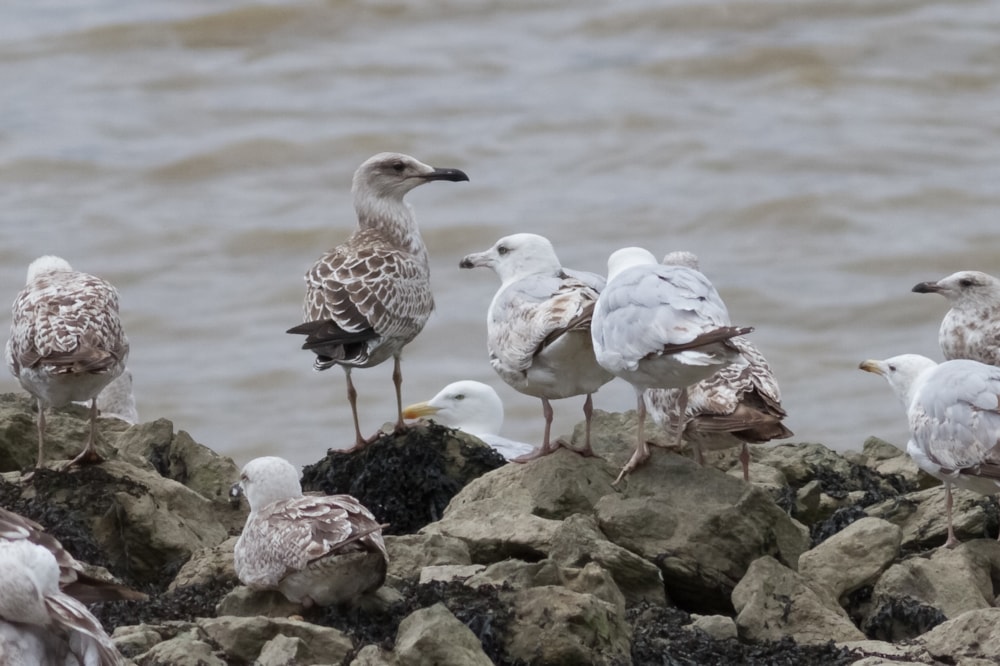 The family party of four Black-winged Stilts (including both parents and two juveniles) seemed equally at home at Oare, staying on site all week. A Temminck's Stint added itself to the mix there on 17th. Meanwhile, the lone male stilt remained at Potter Heigham Marshes, Norfolk, to the end of the review period. 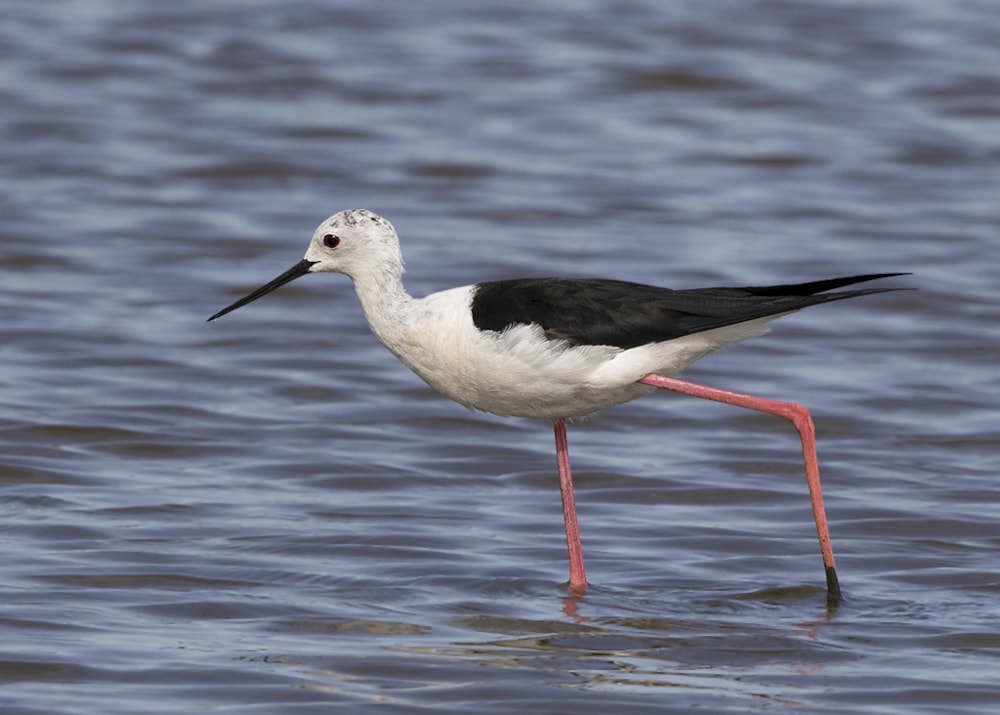 An adult Lesser Yellowlegs was a surprising find at Buckenham Marshes RSPB, Norfolk, late afternoon on 12th. It was nowhere to be seen early the following day but the reason for this was apparent by late morning, for same bird had been identified on the freshmarsh at Titchwell RSPB. There it lingered to the end of the week. Frampton Marsh RSPB, Lincs, attracted its fourth Red-necked Phalarope of the year on 16th. The adult Pectoral Sandpiper remained at Druridge Pools, Northumberland, to 15th and new birds spent 11-13th at Loch of Strathbeg RSPB, Aberdeens, and 16-17th at Brandon Marsh NR, Warks. Others were at the Cleveland end of Scaling Dam Reservoir and over Livermere Lake, Suffolk, on 17th. 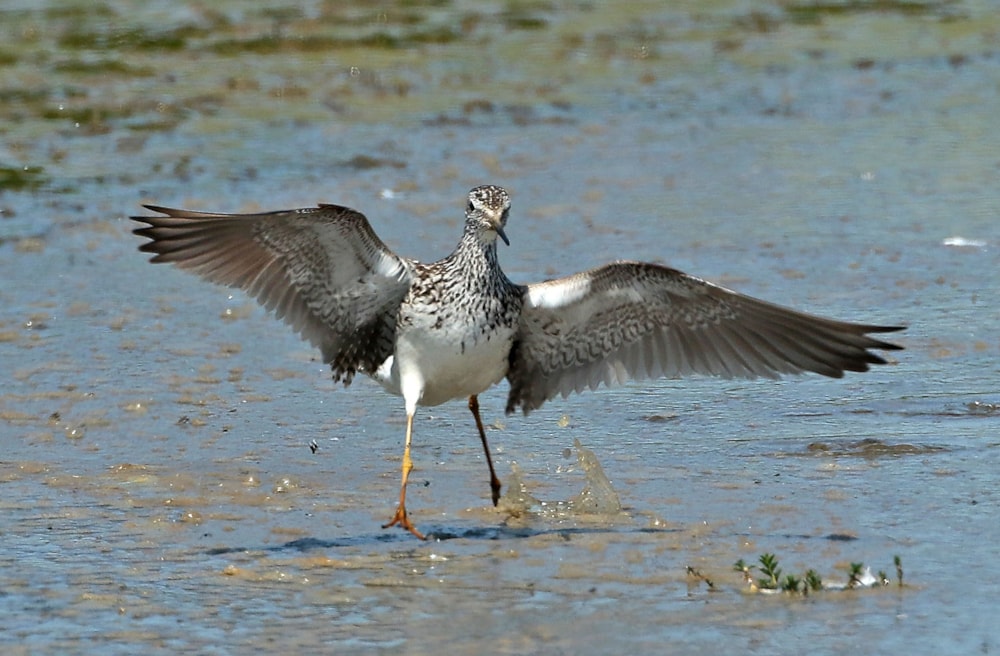 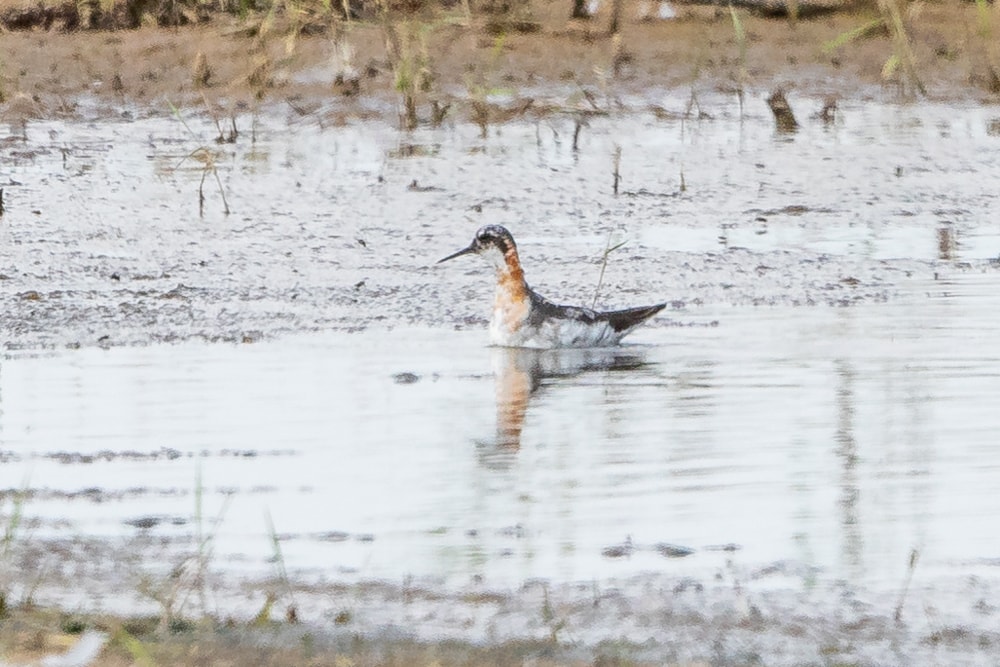 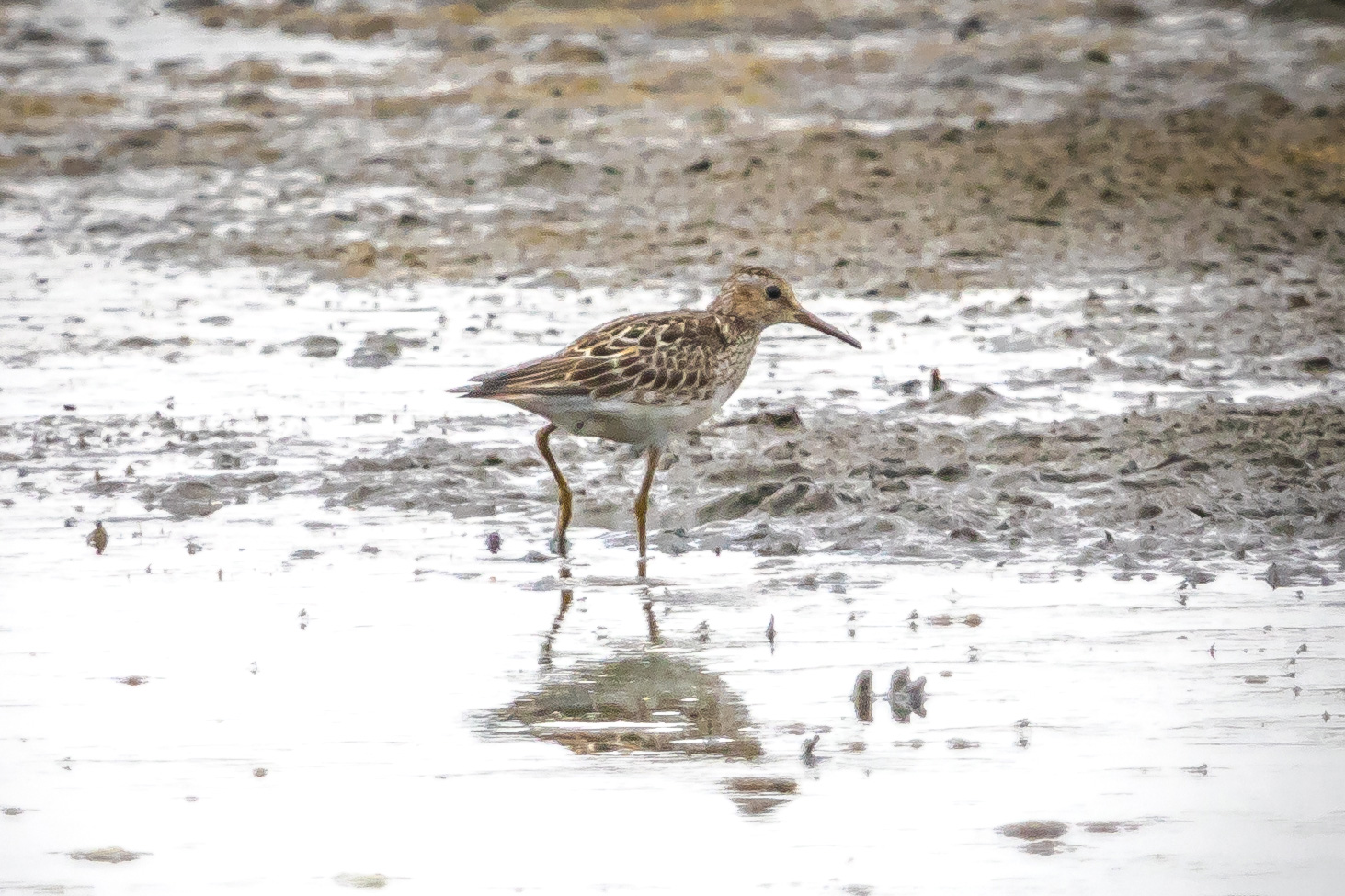 Having been astray from the confines of the Ythan Estuary for almost a month now, there was just one sighting of Aberdeenshire's adult drake King Eider this week: it was sighted off the beach at Blackdog on 11th. In Highland, Strontian's resident adult drake American Black Duck was tracked down at the river mouth on 13th.

The seabird scene is far from the boil but Cape Clear and Scilly pelagics both scored a Wilson's Storm Petrel on 12th, with another in Scilly waters on 16th. A Cory's Shearwater was seen just south of West Bay near Bridport, Dorset, on 11th. An adult Long-tailed Skua flew over the road at Bolnabodach on Barra, Outer Hebrides, on 11th. 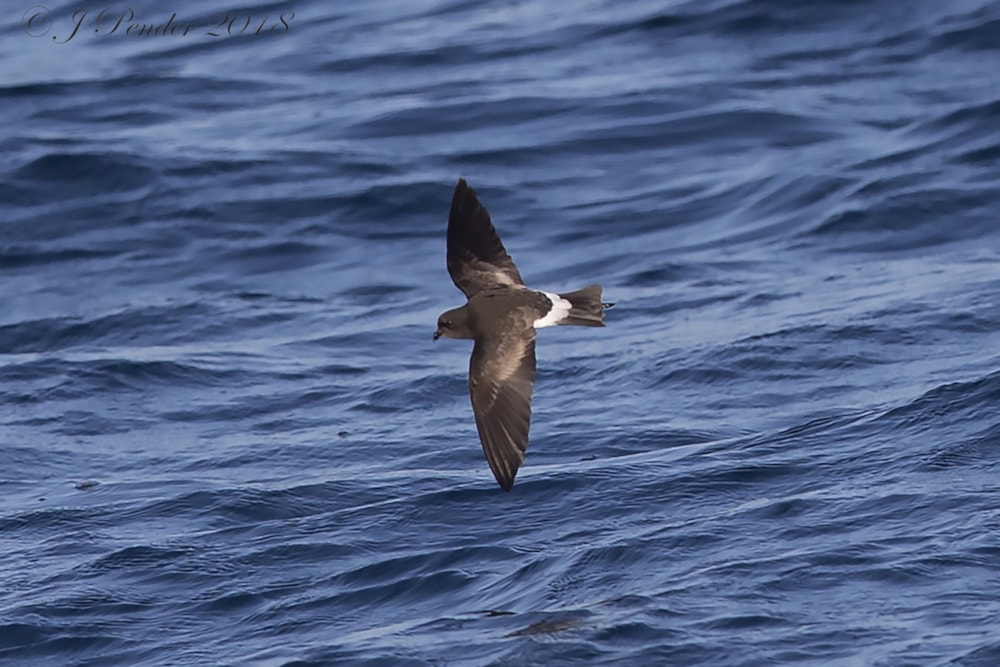 The female Eastern Subalpine Warbler showed no signs of leaving Fair Isle on 16th. Both territorial male Savi's Warblers burst into song again at Island Mere, Minsmere RSPB, Suffolk, on 15th. The summering male Red-backed Shrike frequented the Belted Galloway enclosure at Thursley Common, Surrey, all week. Three of the week's 10 Rosy Starlings were in the Outer Hebrides, including the bird on Barra for its 25th day. Ardnave on Islay, Argyll, boasted one from 12-14th. Among those further south were singles at Osgody, Scarborough, North Yorks, and Woolston, Cheshire, on 11th then one at Long Melford, Suffolk, on 15th, when a sighting at St Just, Cornwall, might have involved one of two birds seen in that area in early June. The sole Irish bird was a stayer at Ferndale, Co Sligo, nudging into the week on 11th. Aberdeenshire had one at Peterhead on 17th. There were rumours of a male Two-barred Crossbill on Westray, Orkney, on 14th. An unexpected first for Portugal came in the form of a male Turkestan Shrike at Ponta da Erva, Lisbon, on 14th. Continuing the theme, a Long-tailed Shrike was at the rarity hot-spot of Jahra Pools, Kuwait, on 16th.

Norway enjoyed its second-ever Blue-cheeked Bee-eater on the island of Bulandet, Sogn og Fjordane, from 13-15th. The country also had a Pied-billed Grebe near Fauske at Klungsetvika, Nordland, on 14-16th and an adult drake Stejneger's Scoter at nearby Rovik on 14th. In Germany, the adult Black-browed Albatross was reported again on Sylt at Rantumbecken on 11th and an adult Sociable Lapwing was at Athenslebener Ponds, Saxony-Anhalt, on 16-17th.