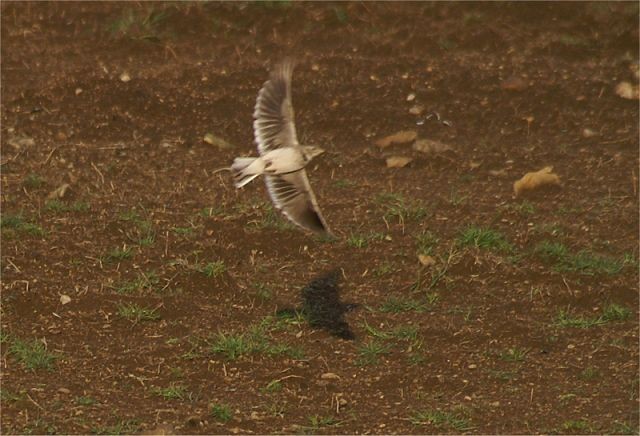 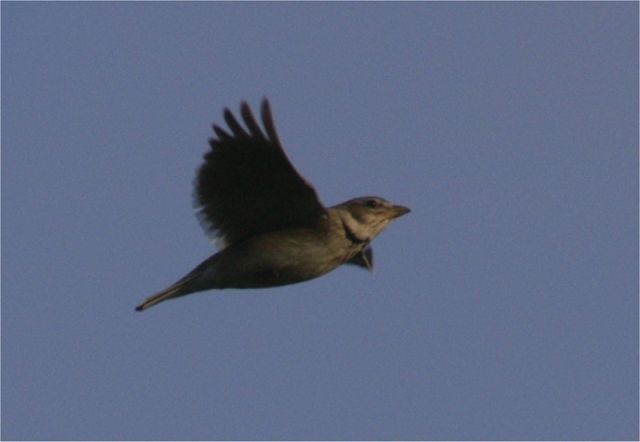 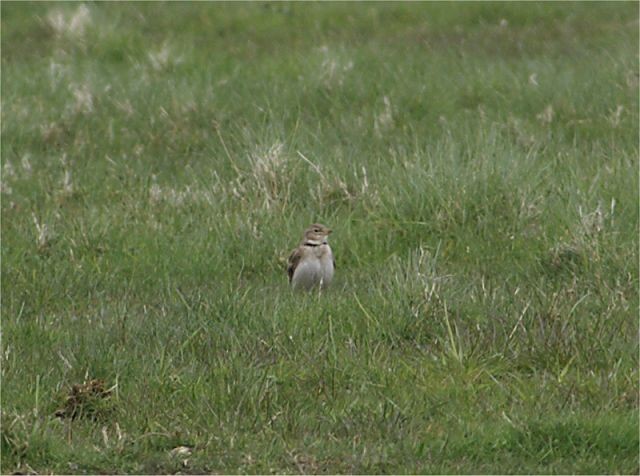 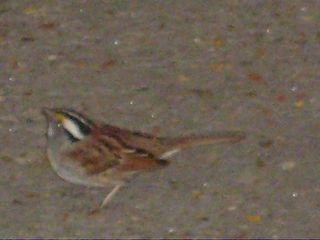 Once again the week contained a number of major rarities, but most were either in far-flung locations, inaccessible or brief! A 2nd-summer Audouin's Gull was found late afternoon at Dungeness (Kent) on 16th but moved on quite quickly. With two previous records, the last in 2005, this is a species that we can expect more records of - the first was also at Dungeness, in 2003. A Calandra Lark at Baltasound, Unst (Shetland) on 12th kept up the species' penchant for offshore islands when they turn up here; this represents the 14th British record. A White-throated Sparrow hopped off the Queen Mary in Southampton (Hants) on 12th following the boat's journey from New York, and was still present early on 13th: it would appear that the bird had been fed on the journey and so would not meet current criteria for admission to the national totals. More accessible was the returning Scops Owl to Thrupp (Oxon), where it was well watched (and heard) last summer, giving an opportunity to see it once again if you missed out the first time. 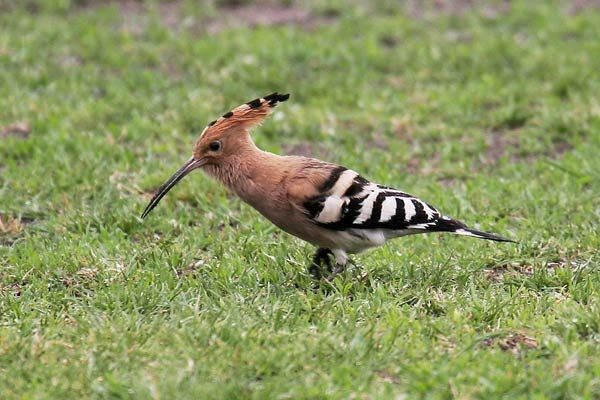 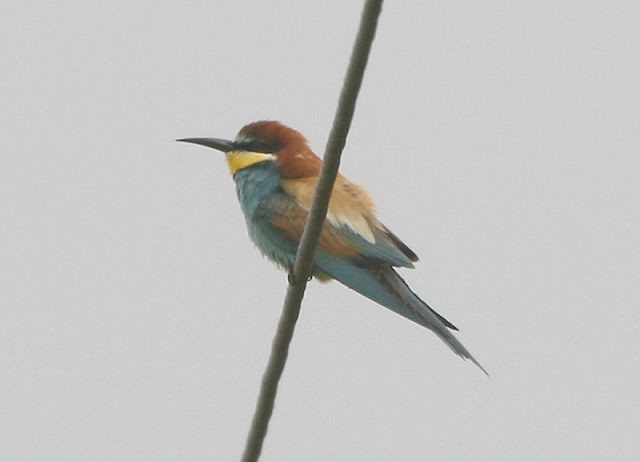 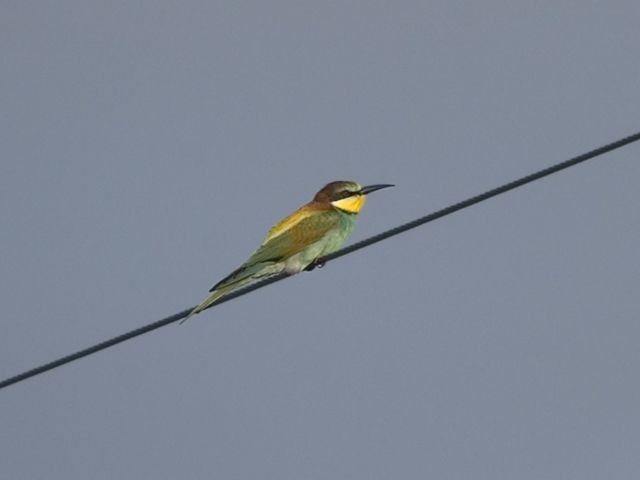 There remained a dearth of expected spring scarcities, the pick of which was a Thrush Nightingale on Fair Isle (Shetland) on 13th, with a Red-breasted Flycatcher at North Ronaldsay (Orkney) the same day. There were Icterine Warblers on Fair Isle on 12th and 13th, a Common Rosefinch was at Flamborough Head (E. Yorks) on 13th and an Ortolan Bunting at Gibraltar Point (Lincs) on 16th. A Bluethroat was at Spurn (E. Yorks) on 16th and a Subalpine Warbler at Brew Pool (Cornwall) on 15th and 16th, plus the long-staying bird remained on North Ronaldsay (Orkney). A Yellow-browed Warbler at Pennington Flash (Gtr Manchester) on 14th was a good local find, two Marsh Warblers were reported and three Grey-headed Wagtails included a male at Salthouse and Cley (Norfolk). More admired were several Bee-eaters, including lingering birds at Morston (Norfolk) and Low Newton (E. Yorks), whilst five Hoopoes included obliging birds at Bishop's Stortford (Herts) and Wotton-under-Edge (Glos). Several migrant Golden Orioles were on the Isles of Scilly, but the only mainland report was one at Rame Head (Cornwall). Two Wrynecks, in Northumberland and Fife, was a poor showing, and Woodchat Shrikes included last week's bird still at Polgigga (Cornwall) and another at Beeston Bump (Norfolk) on 14th. In the skies an Alpine Swift was over Cromer/Sheringham (Norfolk) on 13th and another passed through Lower Test Marshes (Hants) on 11th. Four Red-rumped Swallows included singles at: Brading SW (Isle of Wight) on 10th; Stocker's Lake (Herts) and Gairloch (Highland) on 11th; and West Runton (Norfolk) on 13th. Spurn accommodated a Shore Lark on 12th and Waxwing on 13th, whilst the Iberian Chiffchaff remained at Colney (Norfolk). 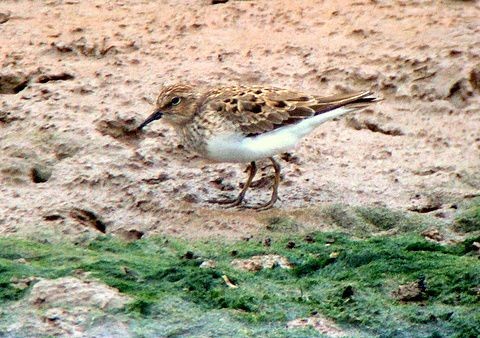 
A Killdeer was between Virkie and Clevigarth (Shetland) on 14th and 15th, whilst the cracking female Wilson's Phalarope was relocated on the Nene Washes (Cambs) on 10th and remained until the 11th. A Red-necked Phalarope was reported from Berney Marshes (Norfolk), and both the Spotted Sandpiper at Blackditch (Co. Wexford) and Semipalmated Sandpiper at Belfast Lough (Co. Antrim) were still present. Six Pectoral Sandpipers were logged, along with seven Temminck's Stints, plus a Kentish Plover at Shoreham (W. Sussex) on 13th. An American Golden Plover was at Farlington Marshes (Hants) on 11th and 56 Dotterel included trips of 22 at Tetney (Lincs) and 12 at Broad Law (Borders). 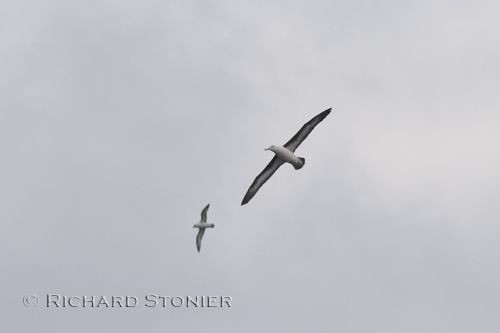 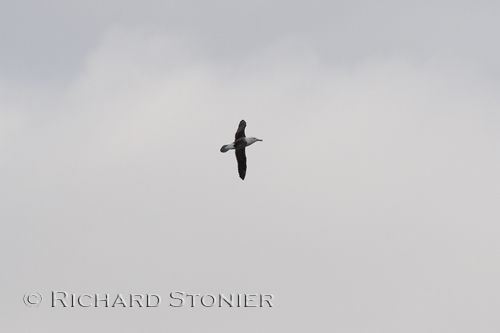 The Black-browed Albatross continued to delight visitors to Sula Sgeir (Outer Hebrides) and a White-billed Diver remained off Lewis (Outer Hebrides). The Farmoor (Oxon) Bonaparte's Gull relocated to Hickling Broad (Norfolk) from 12th onwards and the 1st-summer Bonaparte's Gull was again at Tacumshin (Co. Wexford). The 1st-summer Laughing Gull remained in south Devon and a possible was in Dorset on 11th and 12th. A subdued skua passage continued to be logged from a number of watchpoints, but birders along the south coast were able to enjoy good numbers of European Storm-petrels early in the week with a three-figure count from Hengistbury Head (Dorset) on a couple of dates. A Balearic Shearwater passed Pendeen (Cornwall) on 11th and a Sabine's Gull was at Sand Point (Somerset) on 12th. 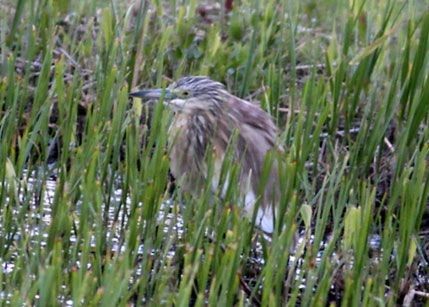 A Squacco Heron on St. Mary's (Scilly) from 13th onwards was the pick of the rare herons, back-up coming in the shape of a Great White Egret briefly at Frampton-on-Severn (Glos) on 10th and another at Brow Marsh (Shetland) on 15th. In Norfolk Purple Herons were at Berney Marshes on 12th and Kelling on 13th, with others reported from Hamptworth (Wilts) on 12th and Theddlethorpe (Lincs) on 13th. Just three Glossy Ibis remained at Frampton-on-Severn and one remained at Warton Marsh (Lancs). On the Outer Hebrides Snowy Owls were again on North Uist and St. Kilda and in Norfolk a Black Kite remained on offer, favouring North Creake on a couple of dates. 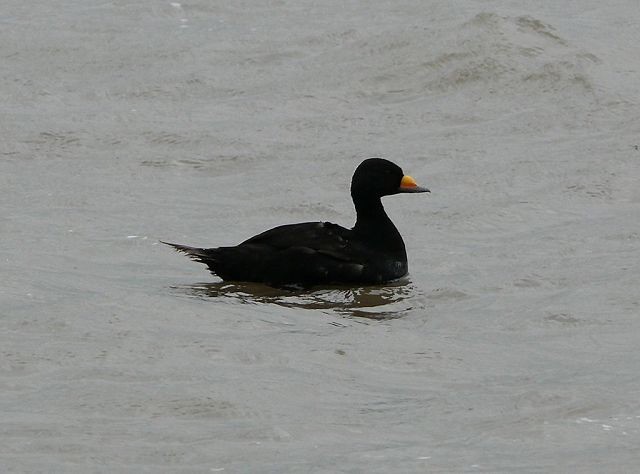 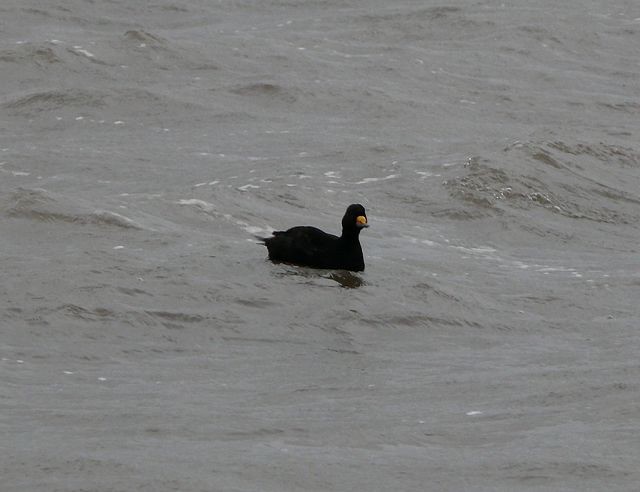 A drake Black Scoter picked up near Jenny Brown's Point (Lancs) and released there on 16th was 'duck of the week', there was a King Eider at Uisaed Point (Argyll) on 12th and one remained at Burghead (Moray/Nairn). Surf Scoters were off Aberdeenshire and Lothian, a drake Ferruginous Duck was on Staines Reservoirs (Surrey) and Ring-necked Ducks were in Derbyshire and Angus and Dundee. The Marbled Duck remained at Frampton to at least the 12th and a hybrid Green-winged Teal was at Druridge Pools (Northumbs). In Kent the Black Brant was at Allhallows-on-Sea to the 12th.

Using a high shutter speed, Chris has managed to freeze the action in the final stage of this Gannet's dive, only inches above the sea. This unusual shot perfectly illustrates the streamlined diving technique used by this species. 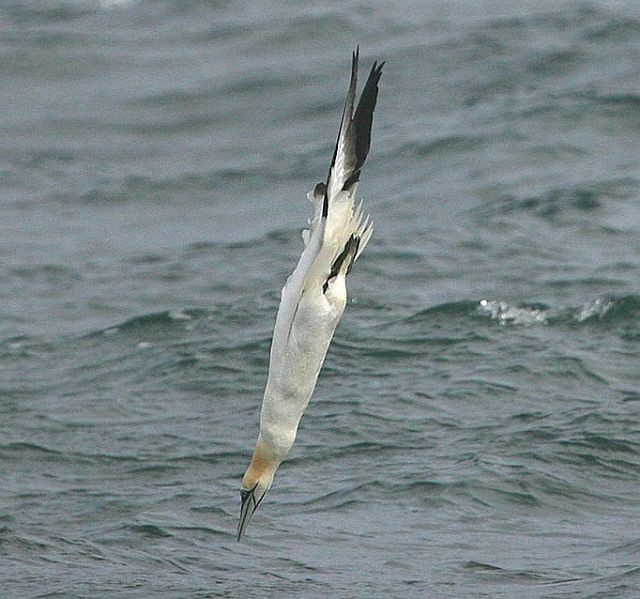 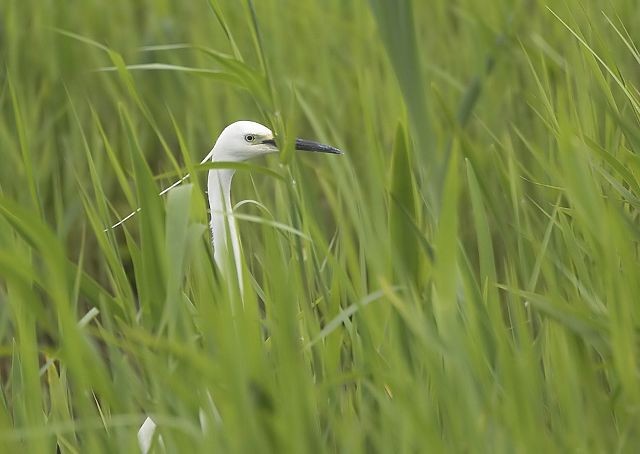 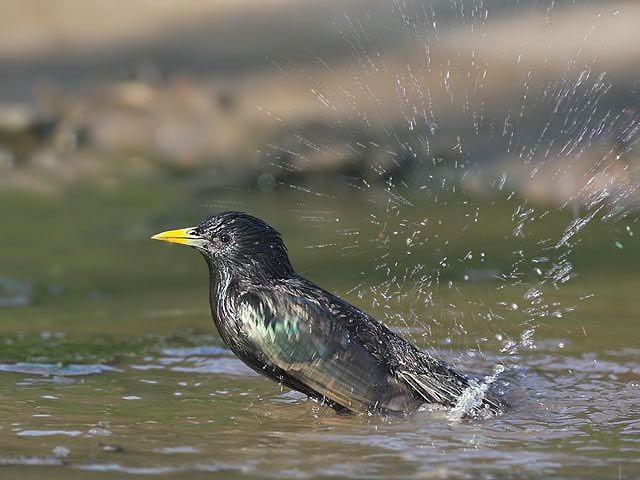 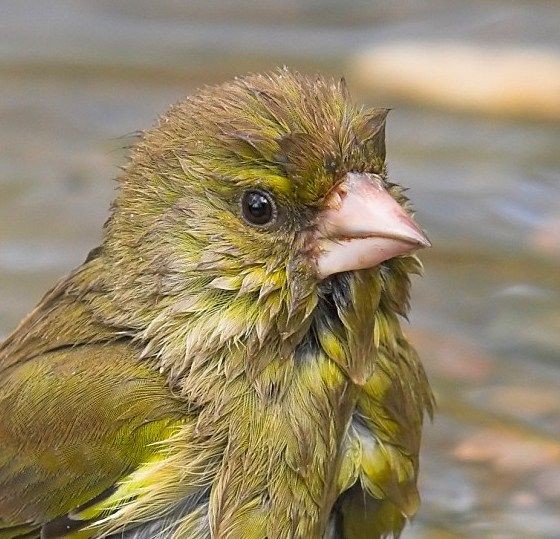 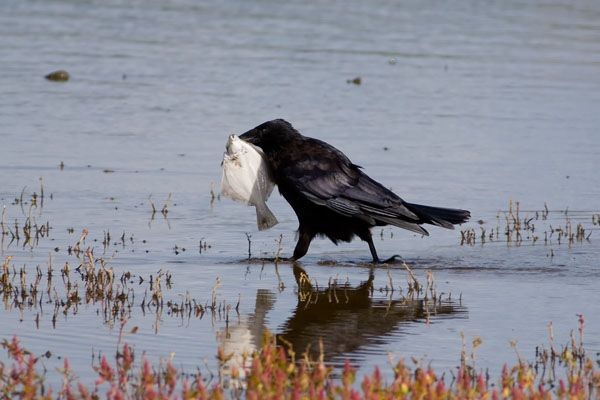 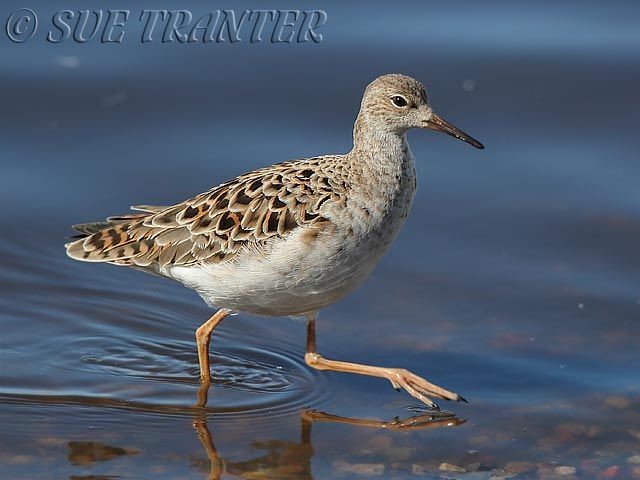