White Bellbird has shattered the record for the loudest bird call to be recorded, reaching the same volume as a pneumatic drill.

The species, which lives in the mountains of the north-eastern Amazon, was recorded at 125 decibels (dB), three times louder than the next bird in the pecking order, Screaming Piha.

Mario Cohn-Haft, an ornithologist at the National Institute of Amazonian Research and the author of a paper published in the journal Current Biology, captured a male White Bellbird specimen in the Brazilian state of Roraima in 2017.

It was about 30 cm long from beak to tail, said Cohn-Haft. He dissected it in the field, removing the skin and some organs to prepare it to be added to his collection. Something caught his eye under the bird’s pure white feathers: a muscular, sculpted chest. "It had a six pack," he said, with tissue five times thicker than that of most birds its size. 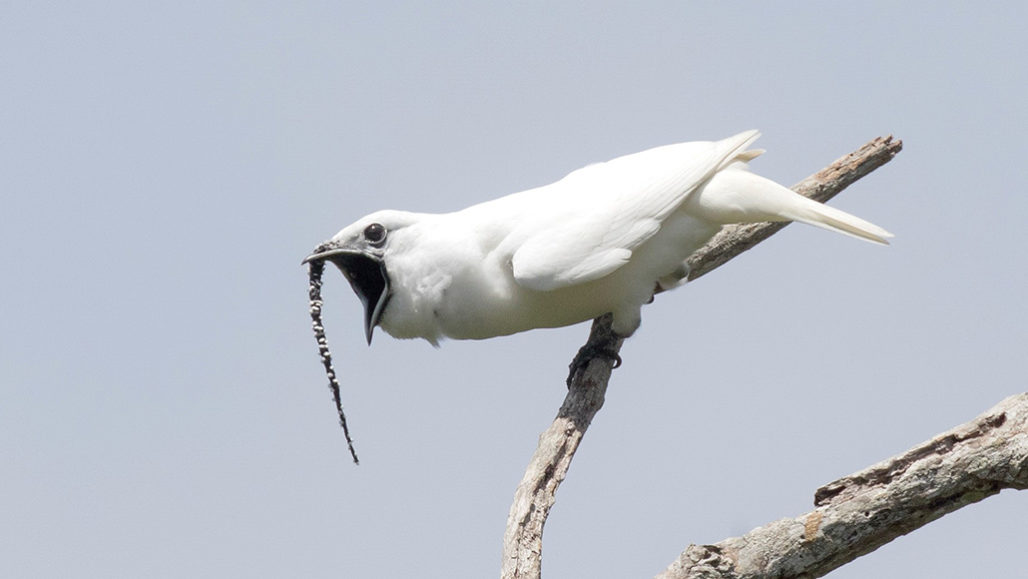 White Bellbird may get its extreme volume in part from its large beak that flares out like a trumpet (Anselmo D'Affonseca).

Cohn-Haft enlisted the help of Jeff Podos, an animal behaviour specialist at the University of Massachusetts and a co-author of the paper, to study White Bellbird. They suspected that the bird's muscular physique might explain its ear-splitting song – the male sings an explosive two-toned cry.

Cohn-Haft and Podos returned to Roraima and crept up to within 40 m of the male White Bellbirds, which were singing from bare branches. They had brought a directional microphone and a precision audio recorder. In order to make accurate measurements, they had to make recordings with the birds facing them, with no intervening obstacles.

The scientists also had front row seats to watch the birds' bizarre courtship rituals. The female alights on a branch about a metre from the male, which promptly begins singing the louder of the two songs in its repertoire. Cohn-Haft said the male faces directly away from the potential mate for the first of the song's notes. Then, in a fraction of a second, he swivels around and yells the second note "right in her face".

"She knows it’s coming," said Cohn-Haft, as females are observered fluttering back a few metres just before the second note. The male has a long black wattle hanging down from the top of his head that whips around when he turns his head. "If she didn't know any better she'd get it in the face," he said.

The bird's song was recorded at 125dB, which Cohn-Haft and Podos say raises many questions. For starters, how can they do this without going deaf?

The researchers suggested the unusual call may be the result of sexual selection. Cohn-Haft speculated that plentiful food in the bellbird's mountain habitat had allowed the species to become unhitched from strict obedience to the dictates of survival of the fittest.

"Survival is easy enough, so these birds are free to develop traits that, whimsically or not, are attractive to each other." He said these traits had more in common with the "beauty" of a song or a dance than utilitarian behaviours such as hunting or tools for fighting such as teeth and claws.

"This is an example of sexual selection gone wild," said Podos.

He said there was no particular scientific benefit to identifying the most deafening birdsong, any more than there was to identifying the cheetah as the animal kingdom's swiftest runner. But he said scientists garnered important insights from nature's extremes. "It's a good place to understand the limits of what nature can offer," he said.