A new paper out today [1 July] has revealed that both Britain and Ireland still have wild Rock Doves surviving on certain islands, but 'pure' populations are limited and many face a rising threat from increasing numbers of feral birds.

Feral Rock Doves, widely known as Feral Pigeons, originate from escaped domestic birds and can be seen in towns and cities all over the world. These feral and domestic pigeons are descended from wild Rock Doves, which nest in sea caves and mountainous areas. In contrast to the success of Feral Pigeon, Rock Dove has been declining throughout its global range – which once encompassed vast swathes of Afro-Eurasia. Its decline has been hard to study because it has occurred due to extensive interbreeding and eventual replacement by Feral Pigeons. Rock Doves now only persist in relict populations where Feral Pigeons have not yet colonised. In fact, given the difficulties of distinguishing Feral Pigeons, Rock Doves and their hybrids, many birders claim that there are no truly wild Rock Doves left despite the existence of potential colonies in certain places, including, in Europe, the Faroe Islands, parts of the Mediterranean and areas of Scotland and Ireland.

Will Smith and colleagues studied possible Rock Dove populations from certain Scottish and Irish regions by analysing their DNA. They wanted to determine whether these birds were truly 'wild', and also how much genetic influence from feral pigeons different populations have experienced.

Through a combination of expeditions and collaboration with BTO ringers, they caught both Feral Pigeons and putative Rock Doves in places like North Uist in the Outer Hebrides, Orkney, and Cape Clear Island. Unlike their feral relatives, Rock Doves are very shy and wary of people, so catching the birds proved challenging.

The team took feather samples from the birds, and took them back to Oxford for DNA analysis. By sequencing the pigeons' DNA, they were able to show the differences between Feral Pigeons and Rock Doves, and also to measure the degree of interbreeding between the two forms.

They found that the putative Rock Doves of the UK and Ireland likely descend from the undomesticated lineage of the species. While Rock Doves in Orkney, for example, have experienced extensive interbreeding with Feral Pigeons and are therefore probably doomed to extinction as a distinct evolutionary lineage, Rock Doves in the Outer Hebrides remain almost entirely free of Feral Pigeon influence. 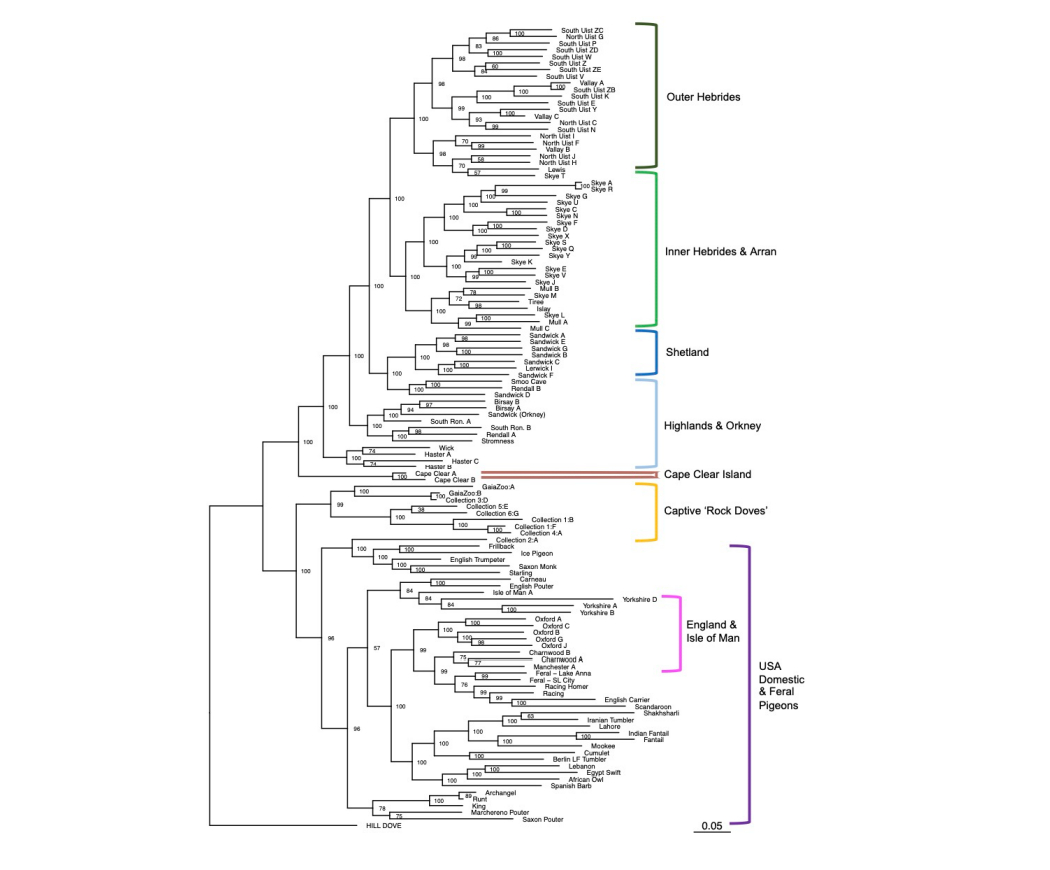 The maximum-likelihood topology from a VCF of 871,968 SNPs and 121 birds, using IQTREE-2, shows a split between the wild Rock Doves and both the feral/domestic pigeons and captive 'Rock Doves'. This split is supported by ultrafast bootstrap support values of 100%. Hill Pigeon Columba rupestris was used as an outgroup. Within the Rock Dove clade there is well-supported geographic structure.

Given that feral and domestic pigeons have been present in Europe for thousands of years, it was a big surprise that the Outer Hebridean Rock Doves have managed to persist, in a form lacking a significant genetic contribution from their common relatives, for so long.

Worryingly, Feral Pigeons are being seen in these islands with increasing frequency, so it might be that the distribution of wild Rock Doves in the UK continues to shrink.

Having a better idea of their distribution and genetic status will help efforts to monitor the remaining Rock Dove populations, and will encourage more efforts to understand potential relict populations across their global range.

Increasing our understanding of 'extinction by hybridisation' will help conservation efforts trying to prevent many other animals and plants from undergoing the same fate as the Rock Dove.