Increasingly as summer approaches birders turn to other groups of UK wildlife such as butterflies, moths and dragonflies to add some colour and interest to their summer birding. As an ex-member of the BBRC, Jimmy Steele is no stranger to rare birds but readily admits he knows "little about dragonflies". With all things quiet on the bird front on his local Newbiggin patch in Northumberland on Sunday 5th July, Jimmy decided to check one of the Summerhouse Lane ponds for progress on the recent colonization of Phragmites reeds. 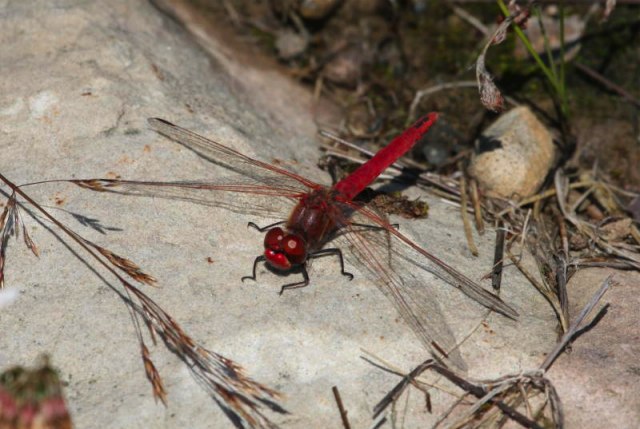 It was this wandering that prompted the discovery of the biggest influx of Red-veined Darters ever recorded in Northumberland and subsequent confirmation of the first mating record in the county. On his visit on the 5th, Jimmy had seen some unfamiliar red dragonflies. Returning on 12th July with someone with extensive dragonfly knowledge, Roger Forster, Jimmy again observed and this time finally identified the red dragonflies as Red-veined Darters. The habitat at Summerhouse Lane consists of a shallow lake sunk in 2005 by the landowners as a collection lake for water run off from nearby land earmarked for development.

The Red-veined Darter Sympetrum fonscolombii is a common enough dragonfly in southern Europe. It is migratory and has increasingly been reaching Britain and Ireland. Whilst individuals have previously been recorded in Northumberland and as far north as Scotland, they have been few and far between. Previous Northumberland records have been restricted to a few sightings on Holy Island during August 1998 and a single July record the following year from a more unusual site: Causeway Pond at Bellcrag Flow, an acidic bog.

One of the most amazing elements of the records at Summerhouse Lane this year has been the sheer number of individuals, with at least one report of up to 15 darters being present on 15th July. Northumberland dragonfly county recorder Harry Eales commented, "It is quite possible all the specimens arrived together as a fragmentary flight from a larger swarm." 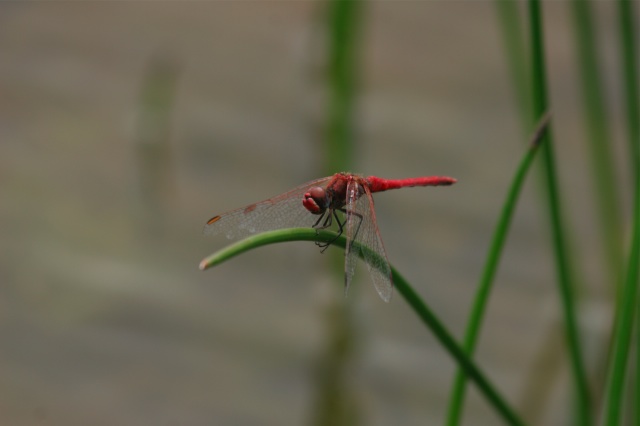 Copulation was noted and photographed on the same day that this peak count was made. Interestingly, another significant record was almost overlooked. Jimmy recalls, "I saw a huge green-and-blue dragonfly go past which I thought was an Emperor. I rang someone local with more knowledge but as I was doing this another fattish dragonfly with a blue abdomen and black tail appeared. There was another red dragonfly which I ignored, as I was still trying to ID the other two, but in retrospect it must have been a Red-veined Darter."

The "fattish" dragonfly was later identified at home as a Black-tailed Skimmer Orthetrum cancellatum, a rare occurrence in the northern counties. Later that week a chance conversation with another local birder, Les Robson, on the Newcastle Metro prompted the suggestion that the Black-tailed Skimmer "would have created a twitch", ensuring that Jimmy arranged a subsequent visit the following weekend.

Whilst the record is of significance for the number of individuals involved and the mating recorded, Harry Eales is realistic about the chances that any nymphs may survive. He commented, "Red-veined Darters are known to have successfully bred in southern Britain but, even if successful oviposition took place at Summerhouse Lane, it is unlikely nymphs would survive unless we had an extremely mild winter as the lake is very shallow."