A new study has identified suitable breeding habitat for the declining rufa subspecies of Red Knot, in turn highlighting the risk that future climate change poses.

The rufa subspecies of Red Knot travels to its breeding grounds in the Canadian Arctic from wintering areas in South America and back again each year, equating to an incredible 30,000 kilometres annually. Its numbers have fallen rapidly in recent decades, and with such a broad range, determining what's behind the shorebird's decline is a huge challenge. The new study, published in The Condor: Ornithological Applications, examines Red Knot nesting habitat preferences across the Arctic and determines that while there is plenty of breeding habitat to support today's population, climate change could pose a threat to this in the future.

Rutgers University's Richard Lathrop and his colleagues attached radio tags to 365 Red Knots captured while migrating through Delaware Bay between 1999 and 2006. To learn where and in what sort of habitat the tagged birds nested, they then conducted surveys via small airplane across the south and central Canadian Arctic, a vast study area spanning from Victoria Island in the west to Baffin Island in the east. They also carried out detailed ground-based surveys on Nunavut's Southampton Island. Across both scales, knots preferred to nest in sparsely vegetated areas on sedimentary bedrock, near – but not directly adjacent to – the coast or interior wetlands, to which they commute in order to forage. 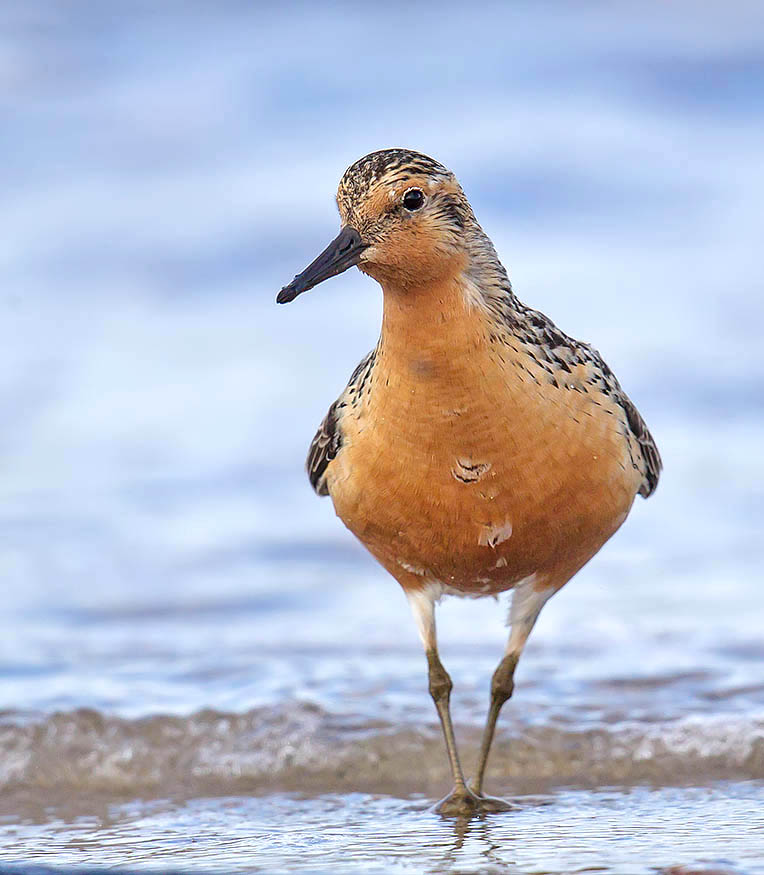 The study shows that there are more than 74,000 square kilometres of suitable rufa Red Knot habitat across their Central Arctic breeding range – enough space for at least that many breeding pairs, assuming one square kilometre of territory per nest. Since the entire population currently numbers only around 42,000 individuals, it's unlikely that a lack of available breeding habitat is contributing to the species' decline, and thus knots' problems must lie elsewhere. However, suitable breeding conditions for a number of Arctic shorebirds, including knots, are predicted to shift and decline in coming decades due to climate change. An understanding of species–habitat relationships will be crucial for present and future conservation efforts.

Conserve Wildlife Foundation of New Jersey's Larry Niles, one of the study's authors, explained: "It took many person-hours over many years of intensive field surveys to find the several dozen occupied Red Knot nests that we located and documented. The area we aerially searched for radio-tagged birds spanned over 1700 km in length, the same distance as from Georgia to Maine."

Lathrop added: "Using the power of satellite remote sensing, data mining analysis, and geospatial modelling, we were able to extrapolate from the field and radio-telemetry surveys to map potential nesting habitat for these birds across wide expanses of the Canadian Arctic. These same tools and techniques could be applied to advance our knowledge about other Arctic-nesting shorebirds."

Brad Andres, National Coordinator for the US Fish and Wildlife Service's Shorebird Conservation Plan, who was not involved in the study, commented: "Implementing effective conservation actions for long-distance migrant birds often involves the systematic elimination of insignificant factors to identify important biotic and abiotic contributors to population dynamics.

"For the first time, Lathrop and his colleagues have described environmental conditions conducive for nesting by rufa Red Knots and provide evidence that breeding ground habitats are likely not limiting the recovery of the population. Their work also furnishes a baseline to evaluate the ability of a changing Arctic climate to provide breeding habitat for this shorebird of high conservation concern."