Record your territorial Cuckoo for the Atlas

By now, many of us will have heard our first Cuckoo of the spring. I heard my first Cuckoo of the year whilst carrying out my Breeding Bird Survey in Thetford Forest on 26th April. It was pleasing to hear one in the same patch of forest as last year, in fact I’ve recorded one on my BBS in 11 out of the 15 years I’ve surveyed this square. I’m probably lucky to still have Cuckoo on a local patch as they have been lost from many areas over the last 15-20 years.

We’re currently undertaking fieldwork for the Bird Atlas 2007-11 project and recording the distribution and breeding status of species are key aims. It’s easy enough to record a singing Cuckoo but confirming breeding is a much more difficult task! There are three levels of breeding status (possible, probable and confirmed) and each level has a number of categories of evidence. Reaching ‘possible’ breeding can easily be achieved by recording a Cuckoo singing (code S) or a Cuckoo in suitable breeding habitat (H). If you visit your birding patch regularly and hear a Cuckoo in the same place a week later you can reach ‘probable’ breeding by recording the permanent territory (code T). Confirming breeding will require a lot of luck. You might be fortunate to stumble across a nest whilst nest recording and be able to record a nest with young (code NY) or see an adult of the host species feeding a young Cuckoo that’s just fledged (code FF). It’s likely that in the highest category we achieve for Cuckoo in many areas will be ‘Probable’ breeding as breeding is so difficult to confirm. 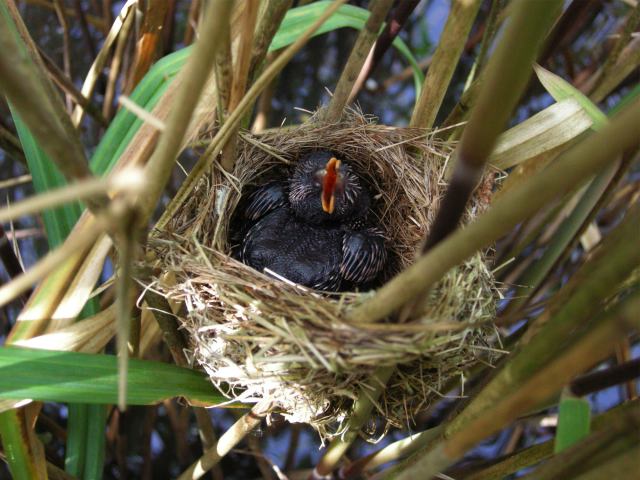 Cuckoo chick in a Reed Warbler nest at the Nunnery Lakes in Thetford, May 2008 (Photo: Dave Leech)

Taking a look at the distribution map from the 1988-91 breeding Atlas (Figure 1) and comparing it with what we have recorded so far in the breeding seasons 2008-09 (Figure 2) you’ll see a widespread loss across Britain and a substantial loss in Ireland. It could be that Cuckoo has been under-recorded so far, especially in Ireland and parts of Scotland where there has been little coverage in some areas; or perhaps these are real losses. 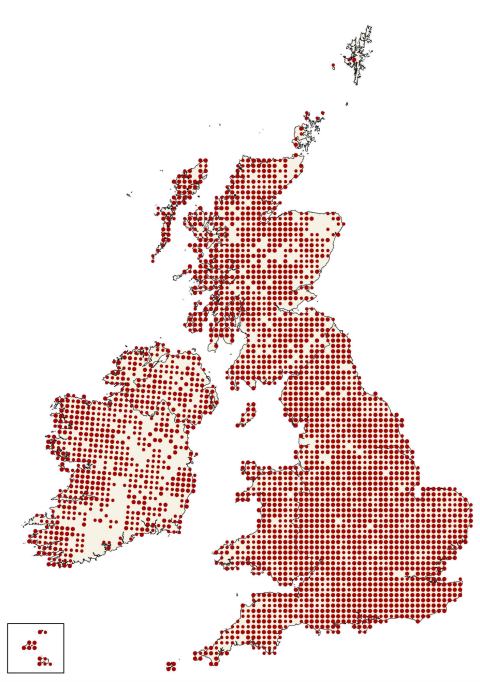 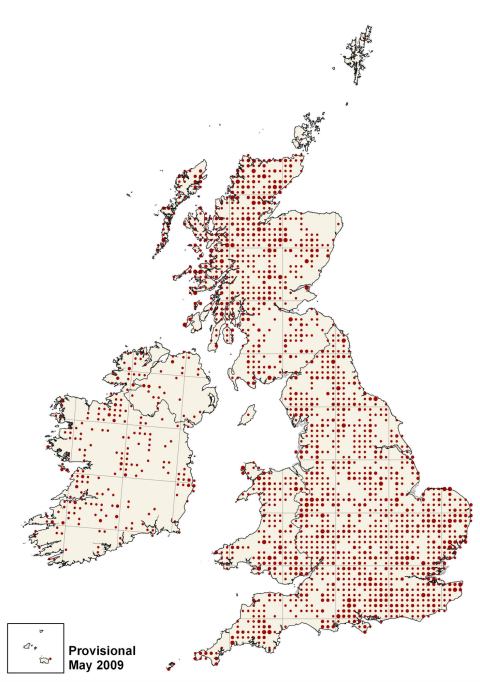 We need your help to fill in the gaps. Are Cuckoo’s really missing from all these 10-km squares now? You can submit your records online at www.birdatlas.net, enter records into BirdTrack www.birdtrack.net or request a paper Roving Record form from BTO (Tel: 01842 750050). Try to record the breeding evidence for every species you see as this is a vital part of the project. Once you have logged into the Bird Atlas website you can use the ‘Any Square Summary’ button to see what’s already been recorded in your area and what level of breeding status has been achieved so far.

If you have a few hours to spare this summer and next winter, it’s not too late to take on a tetrad (2 x 2km square). Just two visits in the breeding season are required (and two in the winter), with the first breeding season visit needing to be completed by the end of May. On the Bird Atlas website click on ‘Request TTV’ to check for availability of tetrads near you or contact your Regional Organiser.

Many thanks for all your help so far.