At 6.30 am on the morning of Sunday 31 July, we were heading north to Walberswick from Ashford in Middlesex. Our regular site in the New Forest for Honey Buzzard had been unproductive this year, and as the bird at Westwood Lodge seemed to be quite reliable, we thought we would give it a try.

We got there at 9.10 am, only to hear that the bird had drifted south some 10 minutes earlier. Deciding to give it a go anyway, we headed on foot towards Westwood Lodge. We were there for only a few minutes when we spotted the Honey Buzzard. It drifted slowly towards us from the south and then flew low over our heads, giving some excellent views.

Returning to the car, we set off for Minsmere, booked in at the visitor centre and picked up a list of recent sightings. First stop was the breeding Stone-curlews, and after approximately 15 minutes we got views of one of the youngsters, though it quickly disappeared behind a ridge. Moving on, we visited the East Hide and then the public viewpoint. Waders on the scrape included Green Sandpiper, Spotted Redshank and Ruff. Having a quick look at the sea, we passed the sluice and headed to the flooded area in the Konik field.

The reeds at the edge of the pool were very high and viewing was a little difficult. However, when the wind blew the reeds down, we managed to see both Green and Common Sandpipers, plus a Water Rail dashing between a gap in the reeds. Then a wagtail landed on the mud. It had two very distinct white wing-bars, was pale in the face, had a solid black bill, an obvious white throat, was grey on the back and it was clearly white under the tail. Getting my friend onto the bird, we watched it for five to eight minutes, when it flew out of view into the corner of the pool – calling twice. There was no doubt: this was a juvenile Citrine Wagtail. Despite assistance from three RSPB staff and volunteers, we were unable to relocate the bird. I decided to move on to check the other pools nearby, to see if the bird had moved to one of them. 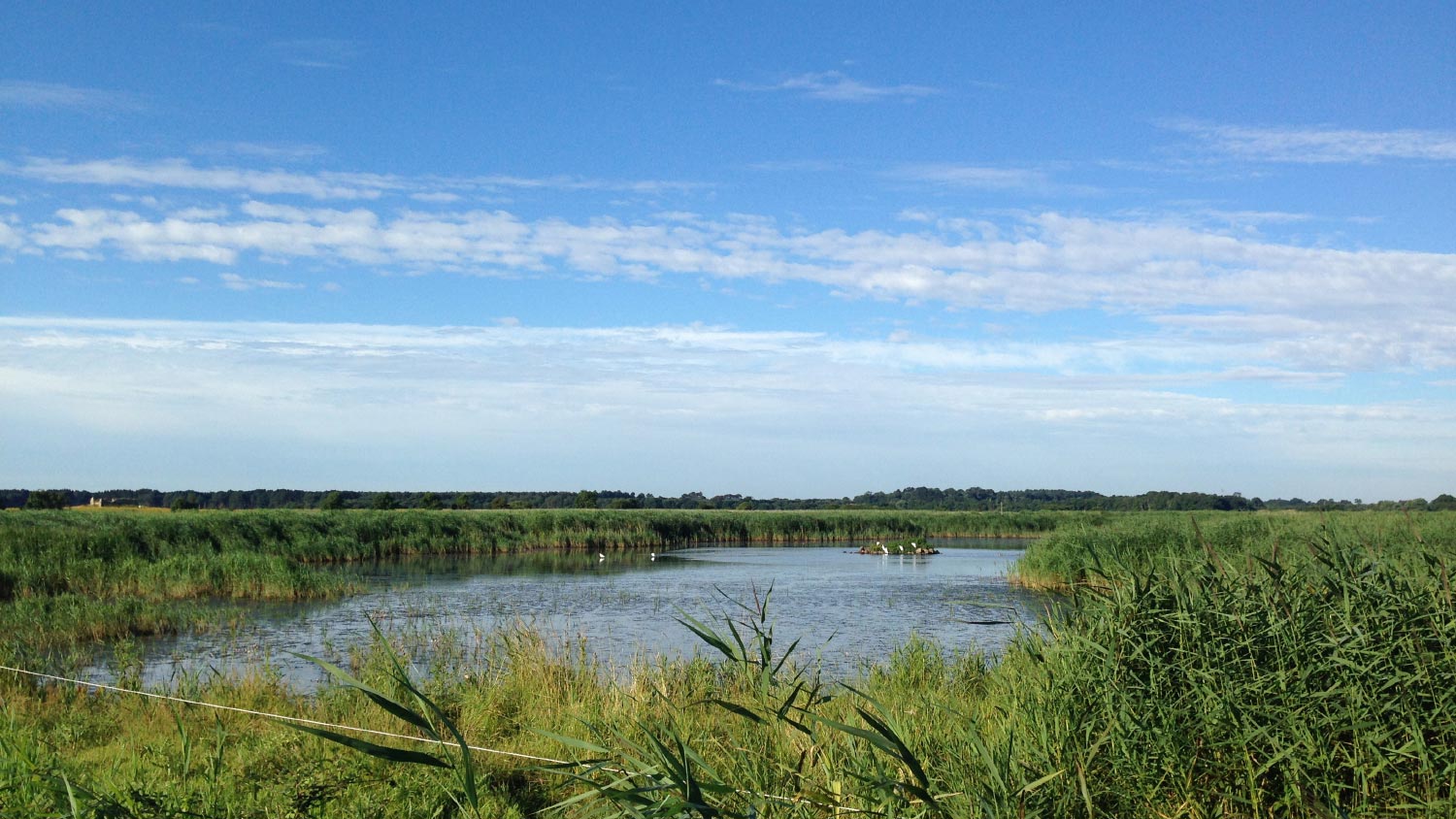 The spot where the Swamphen was discovered (Josh Jones).

Reaching the pool behind South Hide, my heart stopped. Sitting in the open, in front of the reeds preening, was a large blue bird with long pink legs which were definitely unringed. The bird had a large white rear end (I used the word 'arse' at the time!) and had a large red frontal lobe and bill. I believe I actually shouted "Purple Swamphen!" "You're mad," was what I heard next, followed by "It's a Moorhen!"

Things then went slightly bizarre for several minutes, with me being told by a number of people that it was a Moorhen, while all the time I was thinking I needed to get the news out. Fortunately, a Moorhen kindly swam in front of the preening bird and several shouts went up: "Oh my god, it's a swamphen!"

At this point, I called the news in and then did so again and again, as it wasn't coming out on the pager. I began trying to find someone with a camera good enough to get a picture, but despite there being 20 or so people present no one had a decent camera.

At this point, one of the RSPB staff who had tried to find the Citrine Wagtail with me appeared. Frantically trying to get him over to me, he asked: "Have you refound it?" I replied: "No, I have found a Purple Swamphen". The disbelief on his face was a picture, but after looking through the scope, he got straight on the radio. During the radio transmission, the word unringed somehow became ringed. The bird then disappeared into the reeds, with no decent photo taken. It did not reappear for some time, in fact not until after I left at 3 pm (I had friends coming for dinner at 6 pm), but as others appeared, comments such as "I have heard if it gets too deep in the water it will drown" were being made. I asked why? "Because it has so many rings on it." I quickly corrected this – the bird was unringed.

During the wait for it to reappear, I heard someone mention that the day before they had seen a bird for a split second before it disappeared into the reeds. They said that they thought it was just a large Moorhen and hadn't followed it up. It is possible that the bird had been present since at least 30th. 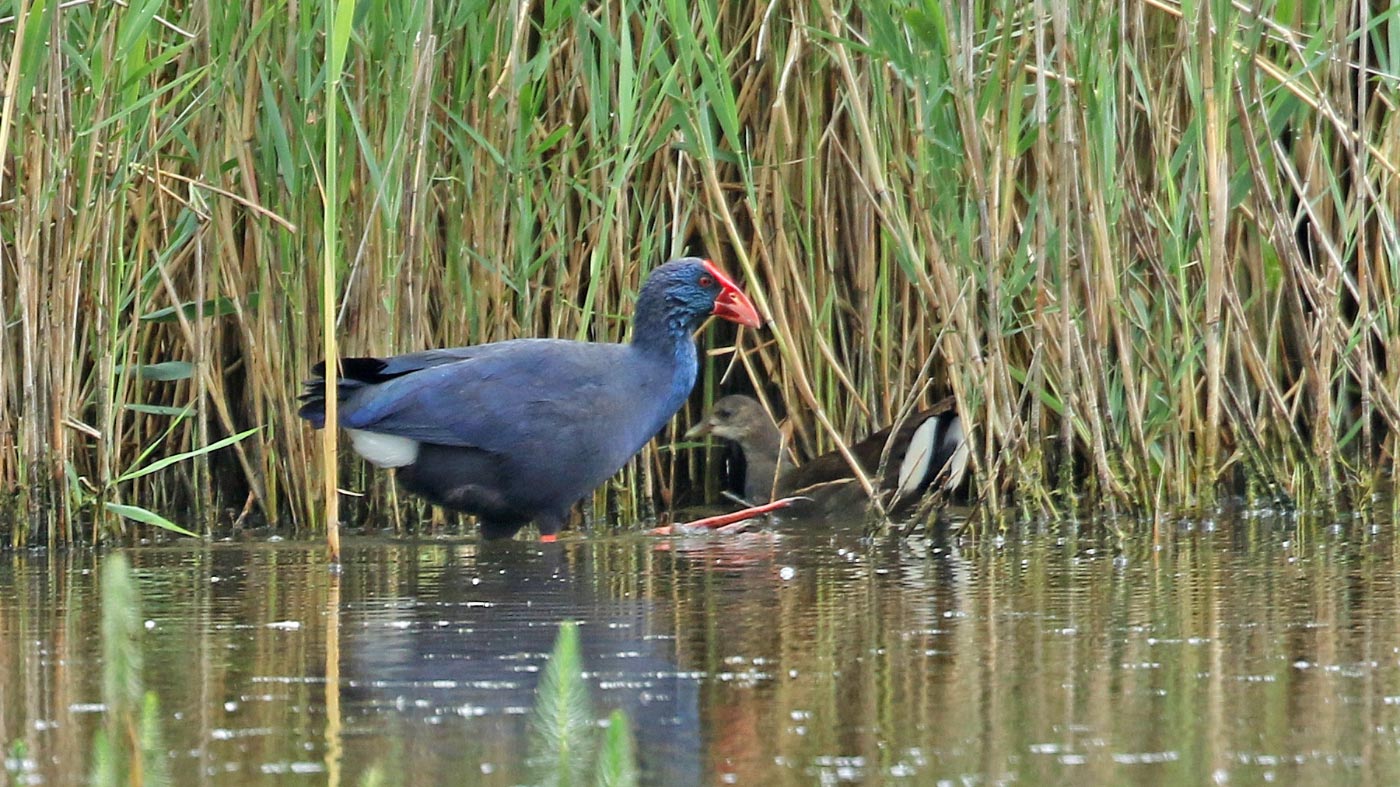 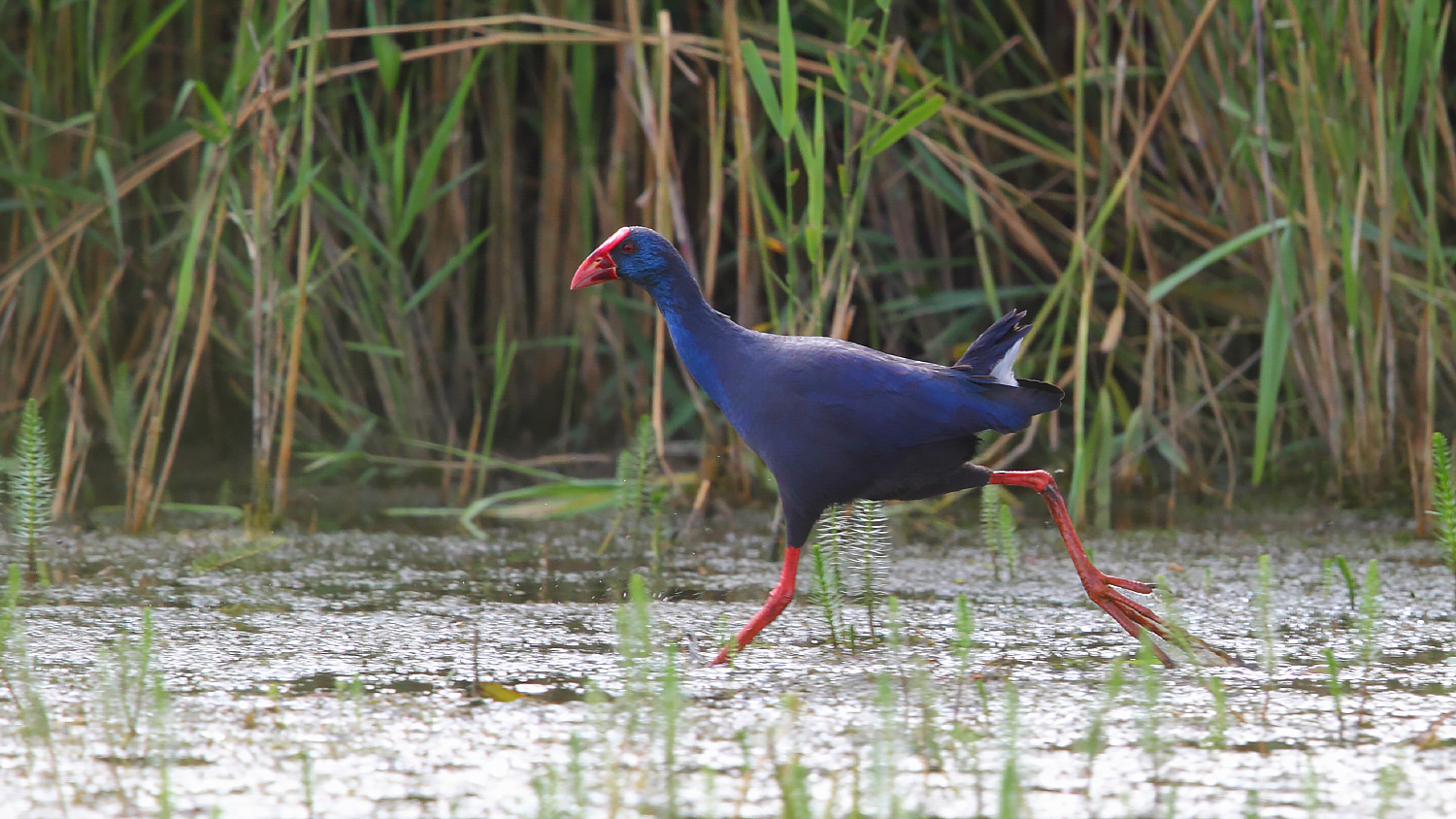 As the news spread and more people arrived, I was over the moon to hear the mega-alert go off while I was driving home. My friend read out the message and I knew that the bird had been seen again and that someone must have got a photo of it. Reaching home, a minute late, I quickly went online to see if any pictures had been posted. There was at least one on BirdGuides. The origin of the bird will obviously come under extreme scrutiny, but I hope that finally Western Swamphen will make it on to the British list.