I first visited Snettisham RSPB, Norfolk, in the late 1970s, cycling from Cambridge in an unsuccessful attempt to see a Red-necked Phalarope. I instantly fell in love with the east side of The Wash and have been visiting it regularly ever since. In 2003 I moved to a nearby village – it has been my local patch and spiritual home ever since. I visit almost every day and, to be honest, I rarely go birding anywhere else in Britain.

Autumn 2021 had started well at Snettisham when, on 16 July, I had found by pure serendipity a Pacific Golden Plover. On the evening tide of 22 July, I was on a mission to find a White-rumped Sandpiper, a species I have found on many occasions in the past and for me epitomises perfection of form. It was a beautiful evening streaming with sunshine which, although good for the soul, has a downside as you are looking into the sun and, unless you are particularly good at identifying silhouettes, it can present something of a challenge.

As the tide flooded in, thousands of Dunlin, Sanderling and Red Knot streamed across the mudflats and, being the only birder present, I had this spectacle entirely to myself. It always amazes me how few birders visit this wonderful place unless something special turns up. I suspect it may have something to do with the difficulty in coping with vast numbers of birds moving quickly ahead of the tide. The trick is to apply mindfulness and live in the moment – slowly look at as many birds as you can and check each one carefully. You won't be able to check all of them (indeed many will be too far away to see well) but the more you check with certainty the more likely you are to find something special. Above all, relax and enjoy yourself and soak in the wonder of seeing so many birds.

On this particular occasion, a gorgeous, full summer-plumaged Curlew Sandpiper mingled with the lovely knot, Dunlin and Sanderling. As for the White-rumped Sandpiper hunt – I will let you guess how that turned out. Just as the mudflats were almost covered, a small group of Dunlins and Sanderling landed in front of me – sadly in silhouette – but among them was something that I knew was special even if I wasn't entirely sure what. 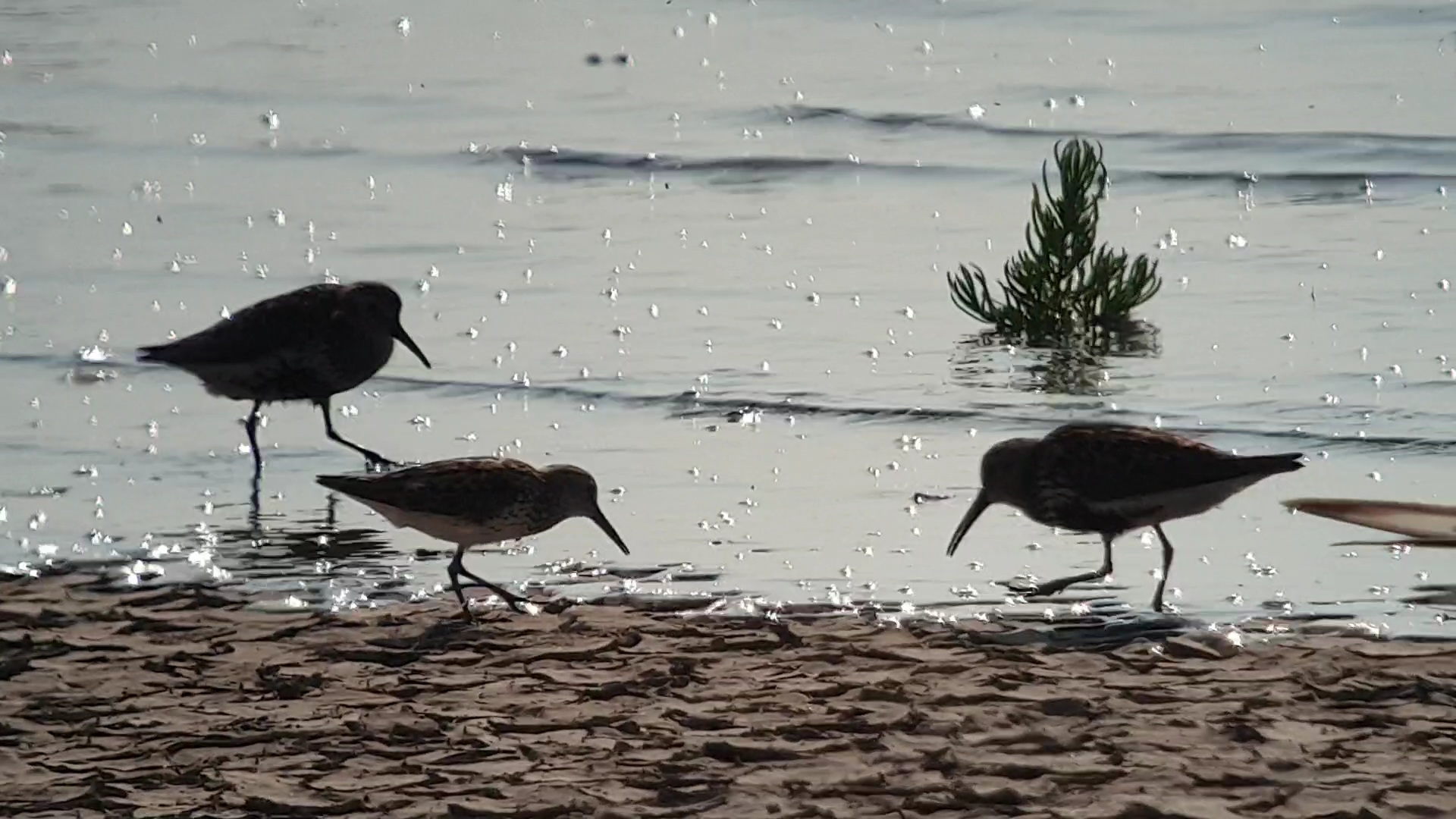 For Chris, early views of the Western Sandpiper were in silhouette (Chris Kelly).

I managed to manoeuvre to get a slightly better angle, but was thwarted by vegetation that obscured the mystery bird. Before long, the tide pushed the flock off and despite much effort I failed to relocate the intriguing calidrid. I was left with a jumble of thoughts, all suggesting different possibilities. In 2018, James McCallum found a Semipalmated Sandpiper at Snettisham in late July which sadly I missed as I was in Chukotka studying Spoon-billed Sandpipers. My first though was that it could be the same bird returning. However, the bill and legs looked too long. It looked far more like a Western Sandpiper. 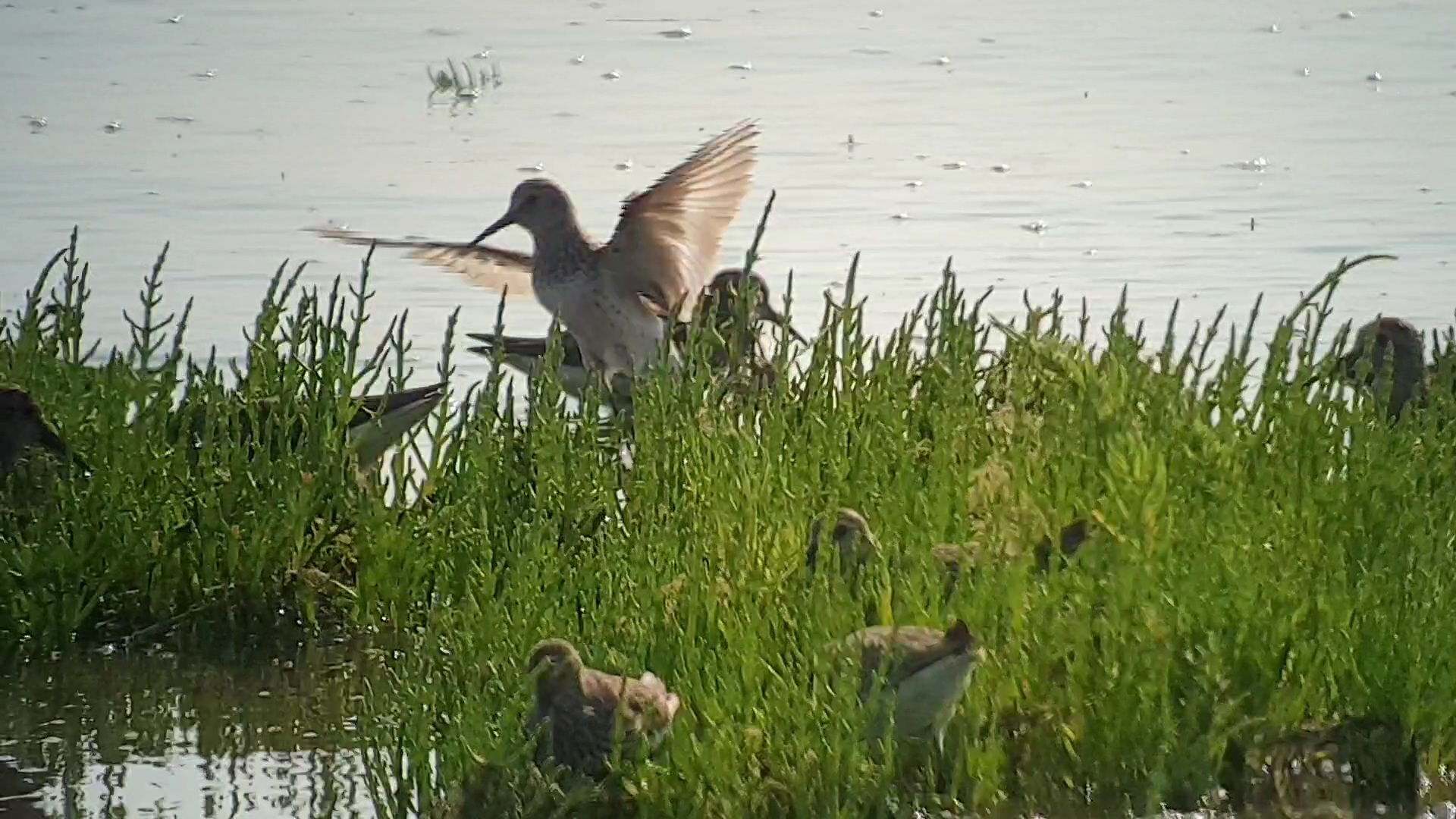 For a while, vegetation partially obscured the mystery wader (Chris Kelly).

I have spent several field seasons in Chukotka and am very familiar with Semipalmated and Western Sandpipers in breeding plumage, having studied the breeding cycle and found dozens of nests. I am also very familiar with Red-necked Stint in breeding plumage, which is a fairly common breeding bird in parts of Chukotka. Although both Western and Semipalmated were possible candidates, the morphology was clearly wrong for Red-necked Stint.

There are two other species that need to be eliminated: Dunlin of the arctica form and Sanderling. Arctica Dunlin can be very small but this bird did not have a black belly, so it was hard to imagine what plumage of that species it could be. As for Sanderling, well, I have spent the last 20 years studying that species and am still surprised at how small they can be (see the below image for an extreme example at Snettisham). However, I know the plumage variation of Sanderling very well and this clearly wasn't one. I had something special and thought I knew what it was, but wasn't prepared at this point to stick my neck out and make it public in case I'd made a bad mistake. 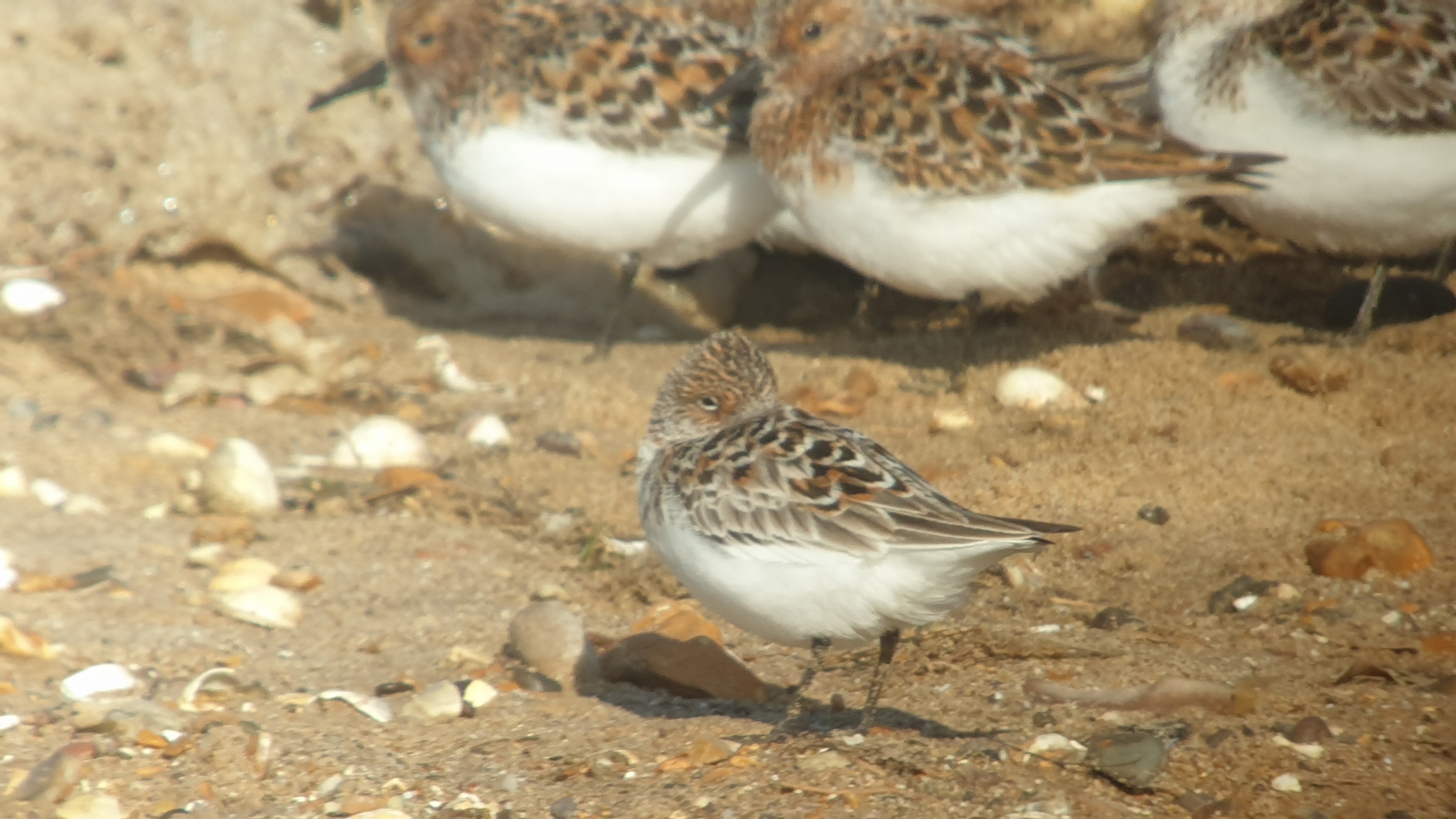 The following morning, I woke up at 4 am and cycled down to Snettisham in the hope of relocating the bird. As the tide fell and the Dunlin spread out to feed, I spotted the mystery bird with them and thankfully it was not too distant. With the sun now behind me identification was very easy – it was a summer-plumaged Western Sandpiper. The orange on the head and back were a bit subdued but clearly visible. Semipalmated Sandpiper is a rather dull bird in breeding plumage and never has this richness of tone.

In addition, the arrows on the flanks were clearly visible and the morphology was correct for Western. I managed to get some video of the bird and this showed the palmations between the toes. Before I could release information about the bird I needed to get the blessing of Jim Scott the site manager. Snettisham is an important breeding site for Ringed Plover and the arrival of large numbers of birders could cause a significant problem. I rang Jim and he said he would be down as soon as he could.

In the meantime, I enjoyed continuous views of the world's commonest calidrid. This was the calm before the storm and I was determined to make the most of it. Jim arrived, I was able to direct him to the bird and he agreed with my identification. We discussed the Ringed Plover situation and concluded that there was only one nest of slight concern and that could be managed by keeping alert as to where people were. 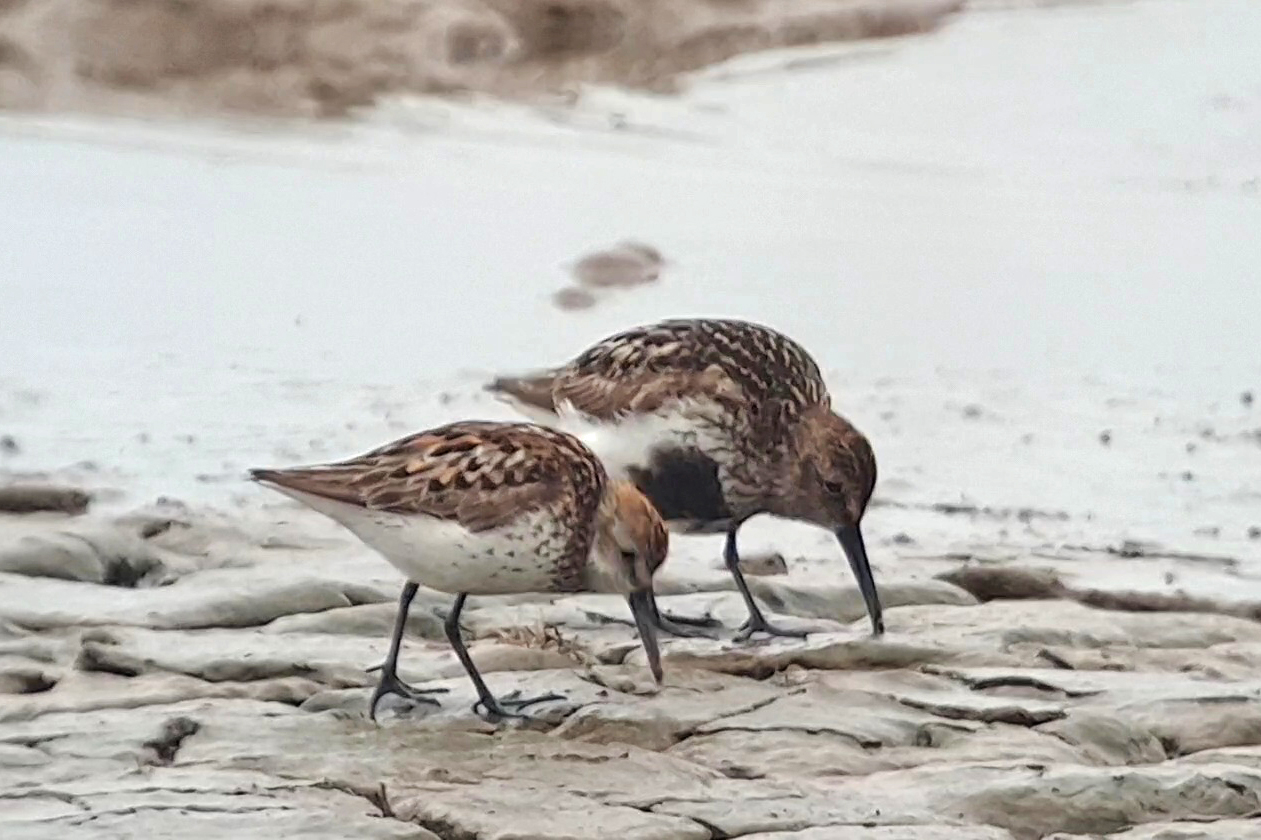 The Western Sandpiper with a Dunlin (Chris Kelly).

So, I posted the sighting on BirdGuides and, not surprisingly, I received a call from Sam to check I hadn’t taken leave of my senses and typed in the wrong species. After passing the sanity test the information went out. Jim had to leave to go to Titchwell, so I was left alone to enjoy the bird once more. When the first local birders arrived I directed them to where the bird was feeding and I departed for home. Once home I posted some photos grabbed from the video so that potential visitors would have some confidence in my identification.

Because the tide had largely gone out by the time most people arrived it was not seen by many people until the evening tide on 23 July. Thereafter, many birders visited the site and the sandpiper was most easy to locate either at high tide or on the falling tide. At low water it disappeared and presumably fed somewhere out near the inner roads. With patience, the bird was possible to find and I believe most people went away happy.  As for the Ringed Plover nest, it survived the initial onslaught of birdwatchers and the chicks hatched on 26 July.