Judging by the many favourable comments I received for my account of finding the Rose-breasted Grosbeak back in September, which seemed to strike a chord with so many, I'll run with a similar theme …

Some rarities seem to follow you around. In my case, Rose-breasted Grosbeak was certainly one and Upland Sandpiper is another. While growing up, I'd repeatedly heard my dad recount how he and my uncle, while making their first visit to Scilly in September 1968, were greeted off the Scillonian II at the quay at Hugh Town by the legendary late David Hunt to tell them that he'd just found an Upland Sandpiper in fields near Peninnis! He kindly took them straight to see it before they made their way to St Agnes – a great start to a memorable trip that also got them Northern Waterthrush and Baltimore Oriole.

After three October family holidays to Scilly proved blank autumns for Upland Sandpipers one was found adjacent to Big Pool on St Agnes in October 1982. We twitched it from St Mary's. I struggled to see into its chosen field over the surrounding dry-stone wall, so none other than Franko Maroevic kindly lifted me atop it to view the quirky, small-headed, long-necked transatlantic sandpiper. Even better, the following year saw me hand-feed the famous Upland in fields behind the hospital on St Mary's. More encounters then followed on Scilly, with fleeting visits in 1990 and 1993 both produced, and I saw two there in 1999. But since then, I've not seen the species in the UK (or overseas) and even the fortunes of Scilly have changed, with just a single record since the turn of the century.

With just a single previous record for Unst, a bird that coincidentally settled in the fields around what is now our house, the chance of ever finding one seemed very remote! But then, with rarity-hunting, you just never know. While we were en-route from Sussex to Shetland in September 2008, during a speculative visit to the Ythan Estuary, we found a Greater Sand Plover … what were the chances of that?!

My autumn this year was effectively made the moment that I clapped eyes on the grosbeak, but it's fair to say that most birders felt it to be a quiet autumn in the Northern Isles. But in one fell swoop, the unassuming but dedicated rarity finder David Roche had changed all that! Just about the last time that I saw David, he was stood at our front door with a Red-flanked Bluetail in his hand. During a recent morning out birding with Brydon Thomason we'd discussed whether the Papa Westray's 'big one' had travelled alone, or could we hope that something else had arrived alongside it? But the reality of resisting the temptation of a multi-island twitch to Papa was a few routine late-season migrants, some lingering flocks of Redwings, Bramblings and, erm …

I had the monthly SOETAG beached bird survey to complete and with the promise of a late whiff of south-easterlies in the forecast, it seemed sensible to complete it sooner rather than later. Brenda enjoys the survey, too, so we set off for Burrafirth beach. While driving through Haroldswick, an all-dark Common Redshank-sized wader flew low across the road in front of us that I didn't dare take my eyes off as I made an emergency stop. I exclaimed words to the effect of "keep on it, I bet that'll be an Upland Sand". 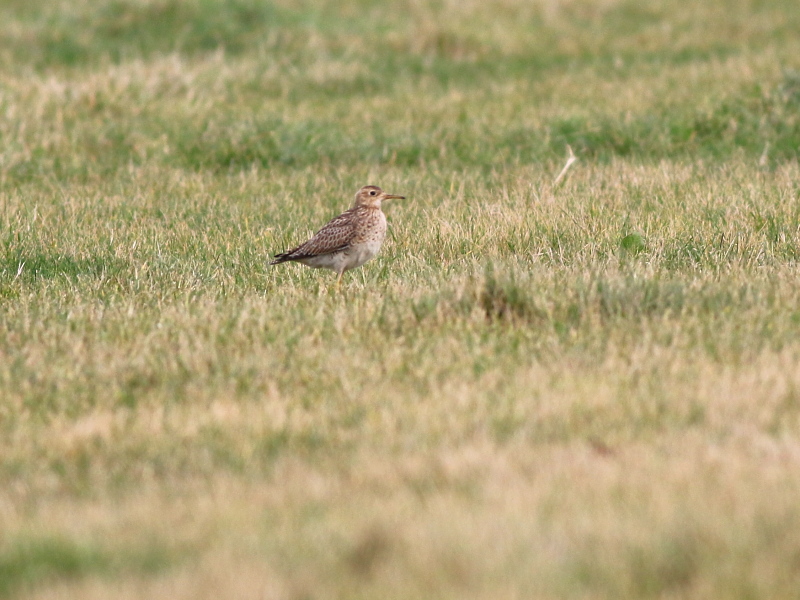 A small, brown, Common Redshank-sized wader flying across the road at Haroldswick caused an emergency stop to the Cooper vehicle (David Cooper).

I abandoned the driver's seat with a plea to Brenda for her to move the car. Being transfixed on the area of long grass into which the wader had landed, I promptly fell into the roadside ditch! Quickly regaining a little composure, I hopped over the barbed-wire fence and was off across the field but all too soon came across a fast-flowing burn that I simply couldn't cross after the overnight rain.

Worse still, while retracing my steps to tackle the field from another angle, 'the fear' had set in. Had it really looked that interesting? Would an Upland Sandpiper really land in such long grass and completely disappear? Had I completely misinterpreted seeing a Common Snipe with a broken bill?! All sorts of crazy negative thoughts were entering my mind.

But suddenly there it was again, now flying directly away from me. Lanky, dark-rumped, definitely something good but frustratingly already quite distant … it landed in a grassy field where it quickly commenced feeding. It was, however, too distant to see much detail at all. It looked an Upland, at the range that it was, it didn't look that dissimilar to a Little Curlew either. And the 'class of '82 blockers' were falling this year, with Long-toed Stint and Varied Thrush … 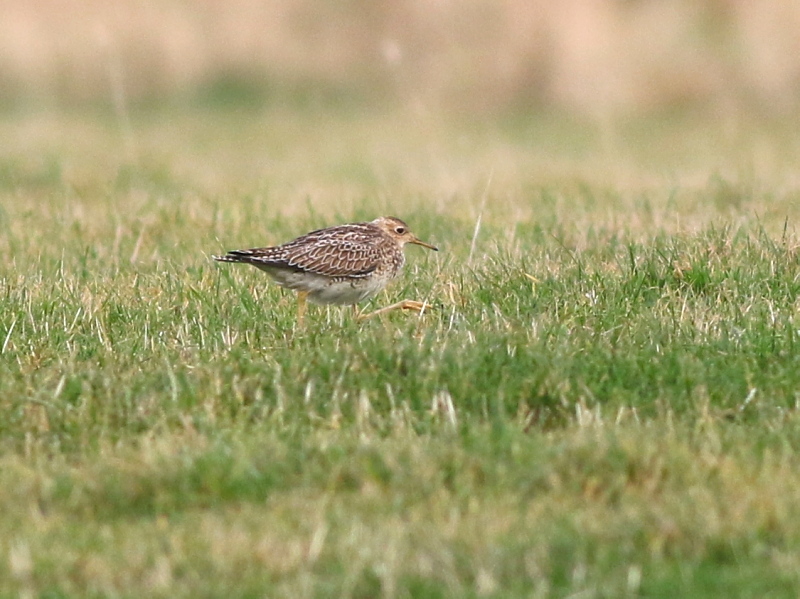 A dash back along the road, another fence-line to cross, a sprint across another field, purposefully into another burn this time creeping along it for the cover that it provided … much closer now, short bill and yellow legs seen, record shots obtained, job done, the heavy thump of adrenaline, the pumping heart, the shakes – there's nothing quite like a rarity find!

I now dared to take my eyes off it for a second, turned around, and was pleased to see that Brenda was watching it too. Thumbs-up were exchanged, and we simply enjoyed watching it some more before a redshank spooked it and it conveniently flew towards me before banking up and away before dropping into the field north-west of the Heritage Centre. 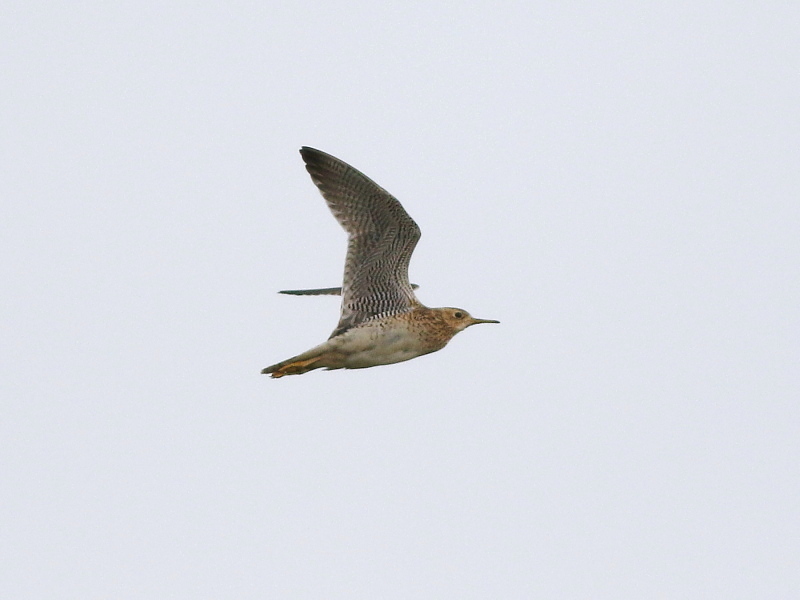 In fliight,the bird's striking profile was apparent, along with the barred underwing and (not visible here) a dark rump (David Cooper).

I don't have a phone signal at Haroldswick, so we quickly returned home, I put the news out, and my old mobile went into meltdown – not for the first time this autumn – and it was fitting that my parents were the first to congratulate us on our find.

Fellow Unst resident birder Robbie Brookes was just sitting down to his wife's birthday lunch that he quickly abandoned. We returned to Haroldswick to join him, Adrian Kettle who had quickly arrived from neighbouring Yell and a visiting couple who had been boiling a kettle in their campervan parked as close as the Viking ship in Haroldswick when the mega-alert had sounded! 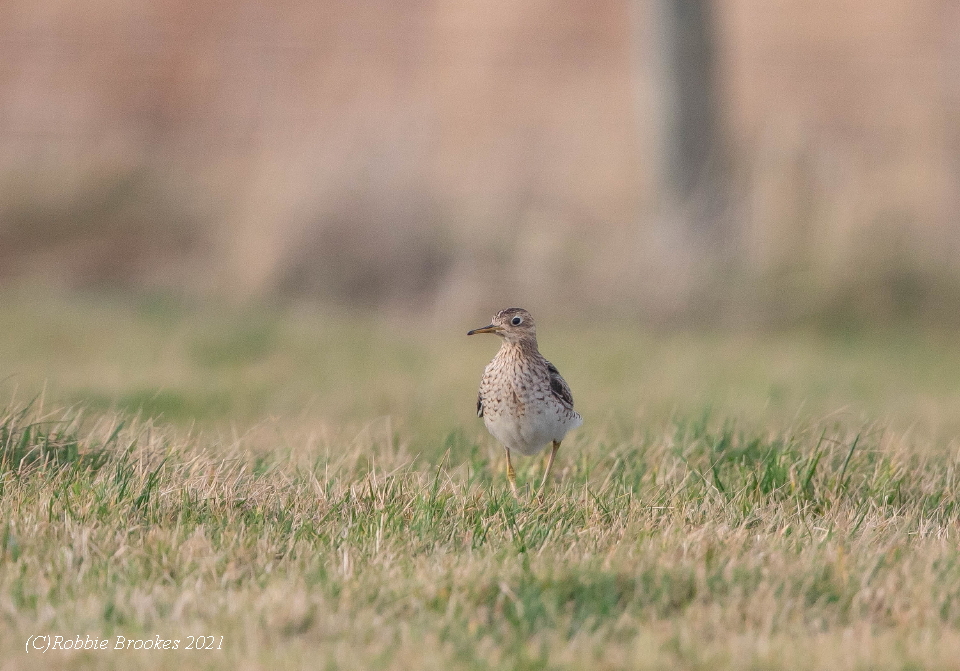 Several Shetland birders managed to twitch the Upland Sandpiper before darkness fell, but there was no sign of it the following morning (Robbie Brookes).

Fortunately, the Upland Sandpiper was still in the same and now performing to all comers. Another eight Shetland resident birders arrived before dusk, and while the sandpiper had become more mobile touring the grass fields that surround Haroldswick, all were successful in seeing it. They included Phil Harris for whom it was the 254th species he'd seen in Shetland this year, equalling the record year list held by Paul Harvey since 2013. At that time, little did we know that I'd be causing Phil to return the next morning for a Pallas's Warbler to break the record! But sadly, despite much searching, the sandpiper hasn't been seen again.