I first set foot on Lindisfarne NNR in 2008. I was working nearby and would call in during my breaks or after work, and I quickly became very fond of the area. A varied mix of migrants, seabirds, wildfowl and waders, plus bags of potential for finding my own stuff, was a big draw for me. However, up until last October I had largely ignored nearby Budle Point. I considered it inferior to Holy Island for migrants and there didn't really seem any other reason to visit the site.

On 21 October last year, I went for a casual wander around the point, not really expecting to see a great deal. I was stunned when flock after flock of Eurasian Siskins were bounding low over the dunes in a westerly direction. What was going on?! In half an hour I recorded 272 siskins and the following day another 217 flying west in 2.5 hours. I recorded more siskins on 26th, plus an Eastern Yellow Wagtail that came up from the golf course and flew south-east! I remembered an article Chris Knox had published on visible migration at Budle Point for the Northumberland and Tyneside Bird Club annual report in 2003. As has long been known by Chris, Budle Point is an excellent place for observing visible migration. This year, I've tried to visit the point as much as possible and I have enjoyed some excellent vis-mig. 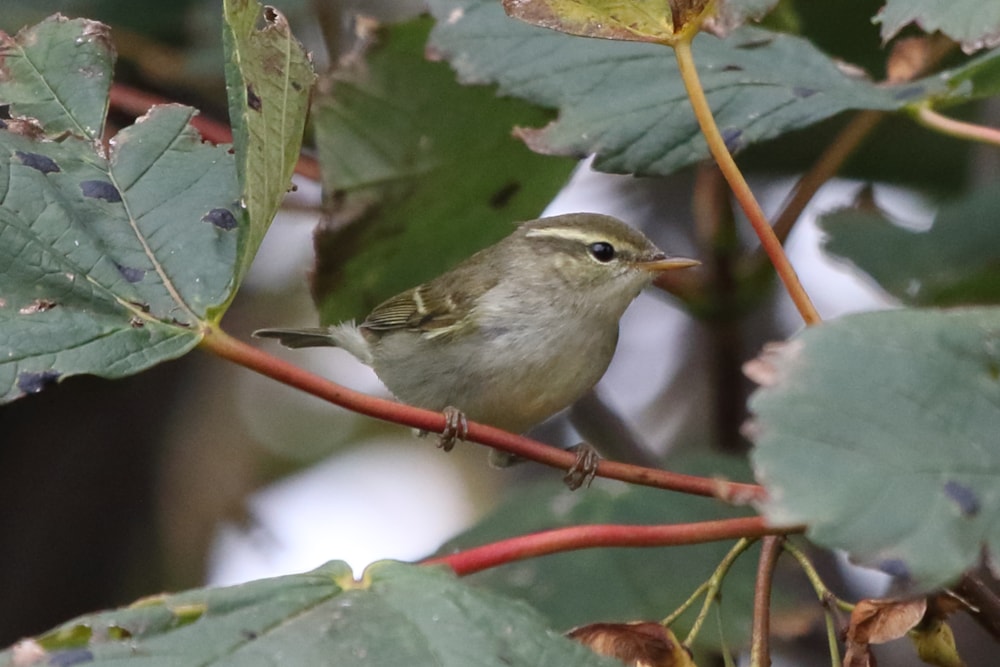 Budle Bay is an area of Lindisfarne NNR that Ross had largely ignored until last October – but it's already rewarded him with some superb finds, like this Two-barred Warbler (Duncan Watson).

On 28 September, I arrived at the point looking forward to a morning of vis-migging. En-route to the point I was pleased to find what appeared to be a Yellow-browed Warbler given the double wing bars. However, as pointed out by Chris Knox, the bird appeared rather subdued and there was something not right. The bird was not showing well, though, and I was keen to get to the point as quickly as possible to catch the early morning rush of visible migration. I had an enjoyable morning, counting 252 Eurasian Skylarks, 81 Tree Sparrows and 28 Crossbill flying west, plus I was pleased to come across a Firecrest.

I returned to the point on 29th for another morning of vis-migging and recorded similar numbers of skylarks and Tree Sparrows, as well as five Coal Tits and a brilliant high-flying Great Spotted Woodpecker calling as it headed high west. Once again, I had brief views of the presumed Yellow-browed Warbler and Chris Knox also managed some glimpses. I was returning back to my car at around 10.45 am, and as I walked past the sycamores that the Phyllosc was favouring I heard what I initially assumed to be a Pied Wagtail calling, given that good numbers were in the area. But then something clicked in my head. What if the 'Pied Wagtail' call was coming from the warbler?

I stood next to the stand of sycamores and again on several occasions heard a Pied Wagtail-type call, but it was still unclear whether it was coming from the warbler or one of the many Pied Wagtails that feed on the golf course next to the sycamores. At 11.45 am, I called Chris Knox to explain the situation and he arrived shortly after. Over the next hour and a half, we had brief glimpses of the bird but it was a nightmare to try and see well. It remained stubbornly high in the sycamores and was very mobile around the trees, never remaining in the same area for more than a few seconds. 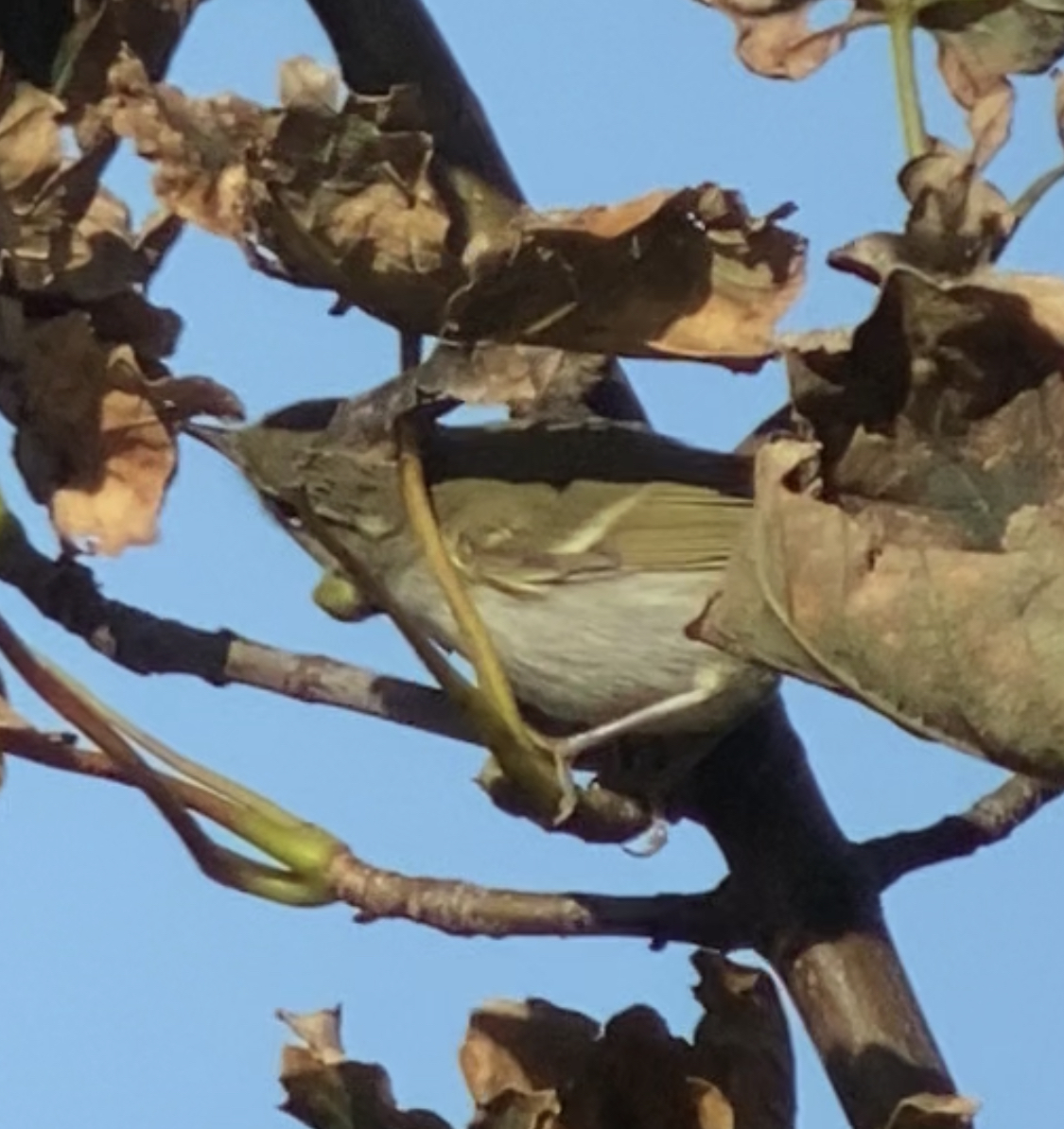 Initial views of the Two-barred Warbler were always fleeting and largely obscured. It took the best part of a day to build up a portfolio of decent views and some images (Ross Ahmed).

Finally, at 1.15 pm, we confirmed that the 'Pied Wagtail' call was unequivocally coming from the warbler – it was without doubt a Greenish-type. Get in! And if this was the bird seen yesterday with double wingbars, then surely it was at least a candidate for Two-barred? I put news on the local bird news group where discussion regarding the bird's identity ensued. I set my recorder running to try and capture the call and tried to snatch photos whenever possible.

Recordings of the Two-barred Warbler by Ross Ahmed (top) and Peter Stronach. Note how similar it sounds to a Pied Wagtail!

For the rest of the afternoon, the bird continued to be very difficult to see properly, remaining high in the trees and very mobile around the sycamores. I had to leave at 3 pm but Chris stayed on site and more birders arrived. I understand that several of the birders who arrived on site in the afternoon failed to see the bird at all. Discussion regarding the bird's ID continued, with the pendulum swinging towards Greenish Warbler at one point, due to its supercilium. However, the thick white greater covert bar, white median covert bar and disyllabic call all pointed towards Two-barred. Photos and sound recordings were sent to various people familiar with Two-barred Warbler, and the feedback received was supportive of the identification. Big shout out to Chris Knox for assisting with the ID process! Eventually the Two-barred Warbler showed very well, allowing excellent photos to be taken. It stayed until the morning of 2 October (Mike Barth).

Budle Point has rapidly become one of my favourite areas of Lindisfarne NNR. I've witnessed some really exciting vis-mig, found an Eastern Yellow Wagtail on my second visit and have come across a host of scarce migrants in just a handful of visits. I would urge birders to explore parts of their local patch that have been dismissed as 'no good'. Get out of your birding comfort zone and give some new areas a try – you may just come across birding gold in the most unexpected of places.