Richard Brown: There were only four birders left on Skokholm by 12 October, with Richard Dobbins (RD) and Luke Marriner (LM) agreeing to stay on with wardens Richard Brown (RB) and Giselle Eagle (GE) to add some extra eyes while the staff began the process of packing up the buildings for the winter. RD has helped in this way for the last few years, meaning that he was present when Portland Bird Observatory Assistant Jodie Henderson found Red-eyed Vireo in 2019 and Red-flanked Bluetail in 2021, and visits earlier in 2022 producing Moltoni's Warbler and Pallid Harrier.

October has produced some exciting birding on Skokholm in the past, with European Roller, Aquatic, Savi's and Sardinian Warblers, Siberian Stonechat, Pied Wheatear, and Tawny and Red-throated Pipits joining an impressive list of Welsh scarcities. However, our thoughts were focus on birds from the west. Past Octobers have produced two Upland Sandpipers, Lesser Yellowlegs, two Red-eyed Vireos, Swainson's Thrush, Bobolink, Baltimore Oriole and Rose-breasted Grosbeak (along with Ring-necked Duck and several Pectoral Sandpipers). Although we were thinking of American birds, we were perhaps not thinking of as rare as what appeared.

Richard Dobbins: Following lunchtime showers and a classic island mist associated with a south-westerly system, I started my afternoon's birding. I had visited the back of the Wheelhouse and had just finished pushing the new Heligoland Trap when a small Phylloscopus-type bird caught my eye as it clung to the stem of some Goldenrod. I was immediately struck by the bird's white undertail coverts as it dropped to the ground not too far from where I was stood. Two conspicuous yellow wingbars were also obvious as the bird hopped along the ground, seemingly tired. The mantle was a vivid green, like the wings of a Bonelli's warbler, and the head pattern was reminiscent of some vireos, with a bright yellow supercilium prominent in front of the eye. All of the flight feathers were tipped bright white. The view was brief but I knew I had to get the three other birders onto this. I put the news out on the UHF radio that I had a warbler I couldn't put a name to and hung back, allowing the bird to hop in and out of view as it slowly made its way through the Goldenrod. 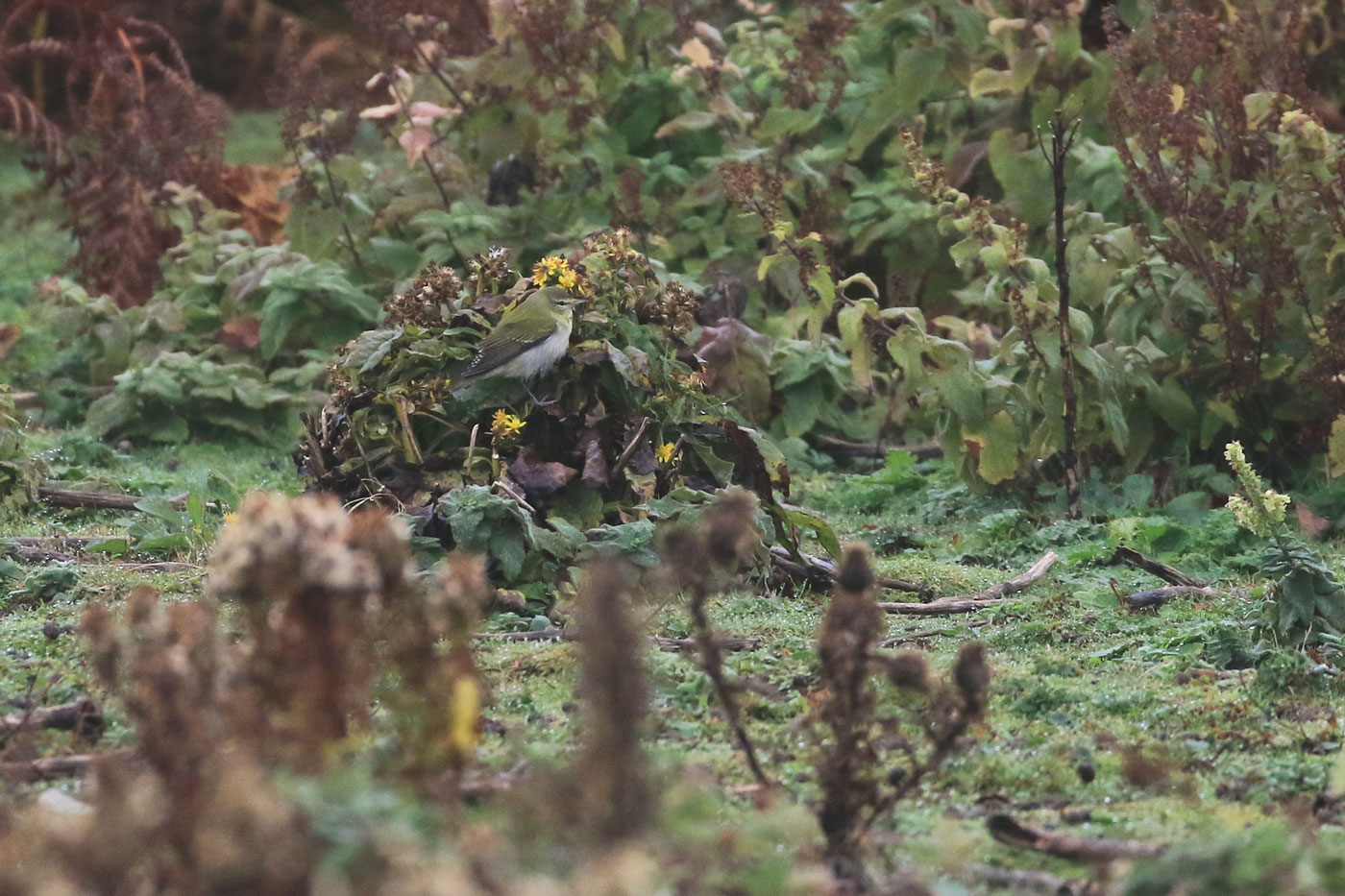 The Tennessee Warbler generally fed on the ground among the Goldenrod.

RB and LM soon appeared on the Knoll behind the Observatory, but their view was obscured by Goldenrod in the same way as it was for me. GE had taken up a position in the gate of the Courtyard where the views were better and the lads ran around the back to join her. I could hear photos being taken and it was clear they were on the bird, this giving me the opportunity to loop back around and join them. Discussion was brief upon my arrival and RB muted Tennessee Warbler as an identification, a species he and GE had only seen in the treetops of Costa Rica. I felt that he might be right but had something in the back of my mind suggesting that we should check Orange-crowned Warbler, these species that I had encountered in Canada and Costa Rica. With photographs in the bag I decided to nip around to the Library and confirm the identification.

Just as I was entering the Library I was confronted by RB, LM and GE coming from the opposite direction. They had seen the bird fly low around the corner in my direction. At first it appeared as though the bird had gone missing, however a movement low in the Goldenrod revealed it was almost at their feet. Everyone froze, but this close encounter didn't last for long, the bird flying straight past me and round another corner to where those who twitched the Swainson's Thrush and Myrtle Warbler had been stood. We cautiously peeped around the corner, mindful that it could again be close, however there was no sign. We took up a position on Home Meadow where we could view the bushes from a distance, however it did not reappear. I did get a chance to visit the library and remind myself that my first views of the white undertail coverts and bright mantle had already clinched the identification. 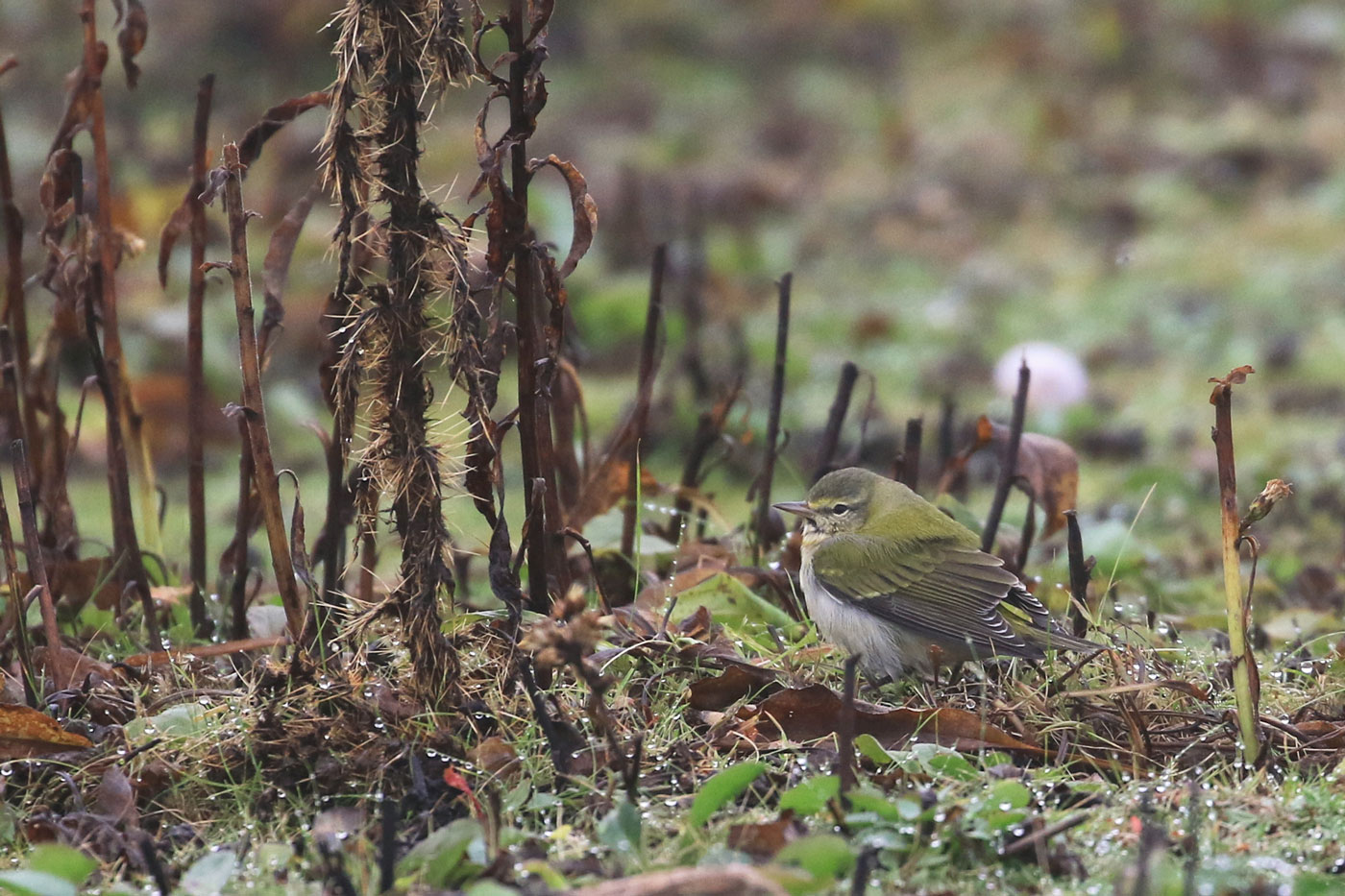 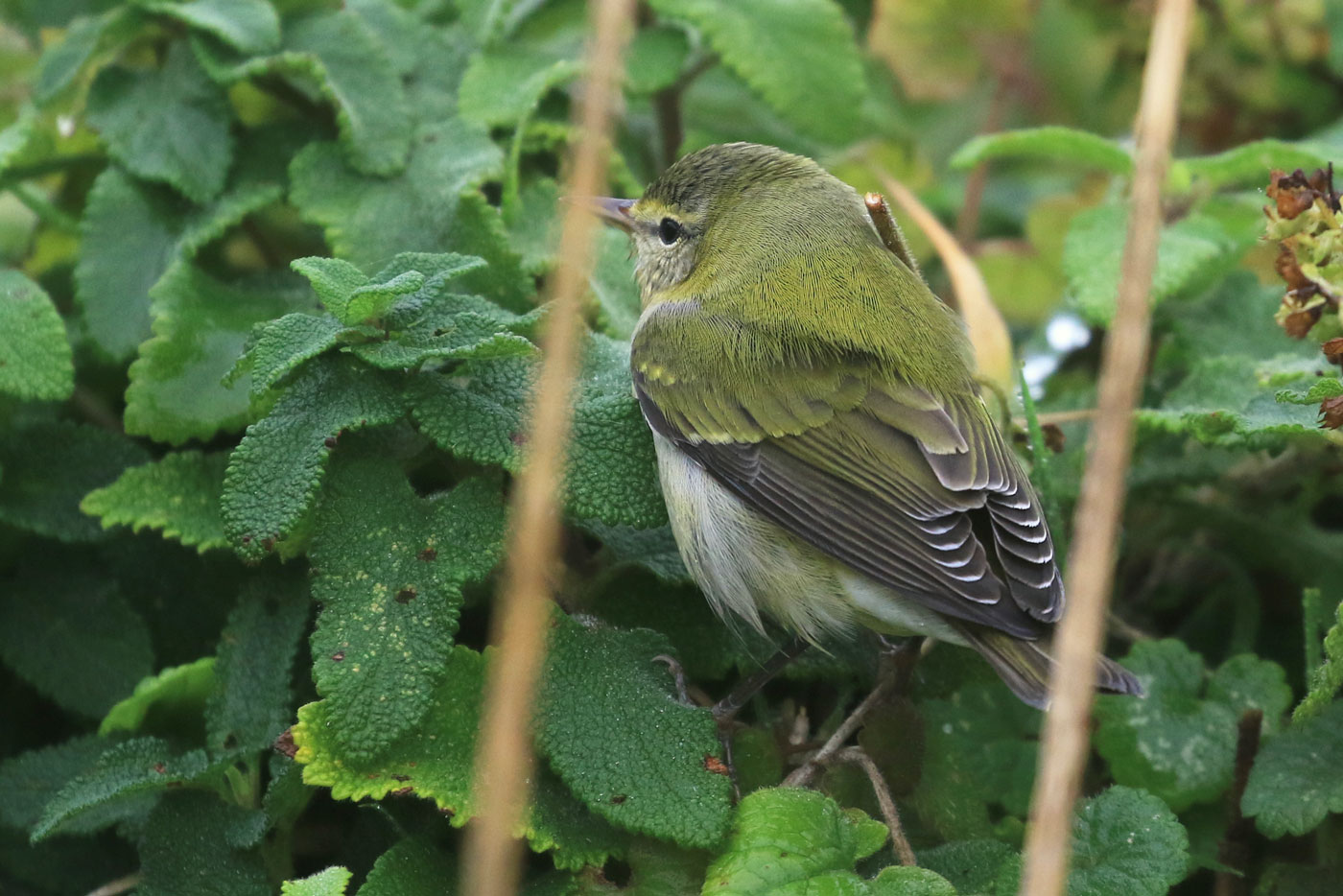 The bird gave remarkably close views at times, allowing a suite of distinguishing features to be well documented.

RB put the news out as there was a weather window for a twitch the following day, however we could not relocate the bird that afternoon or the following morning. Skokholm Island is fragile, honeycombed with 100,000 seabird burrows and not suitable for large numbers of people to be searching unfamiliar terrain. In the absence of the bird, RB and GE thus took the decision to cancel the twitch. We can only hope that the next exciting bird to turn up on Skokholm settles somewhere convenient, as did this year's Moltoni's Warbler and other recent North American passerines. Although the Tennessee Warbler had kept low and moved in a seemingly tired way, its eyes were almost always wide and it was not fluffed up in the manner of exhausted migrants during a fall. A later search under the bushes towards which it had flown failed to locate any sign.