Rarity finders: Tales of the Orient

Back on 22 March, a note left by the Post Office indicated I'd missed delivery of a letter that required a signature. I had to arrange for it to be redelivered, but through an error on the Post Office's part it wasn't there for me to collect on the due date. On 2 April, after a late night celebrating my 50th birthday, I answered the door bleary-eyed to the postman who had a letter to sign for — perhaps a late birthday card?

It turned out to be the original letter, addressed to the County Recorder. Inside was a nice note and about 20 photos of a 'Turtle Dove' taken by John Waterman. The writer explained that the photos were taken in February in a garden in Otford, just north of Sevenoaks in north-west Kent, and sent to an RSPB expert on Turtle Doves, who had identified it as an Oriental Turtle Dove of the subspecies meena. Fortunately, one of my birthday presents was Birds of Central Asia, and it duly provided confirmation of the identification. There, staring me in the face, were photos of a mega in Kent. 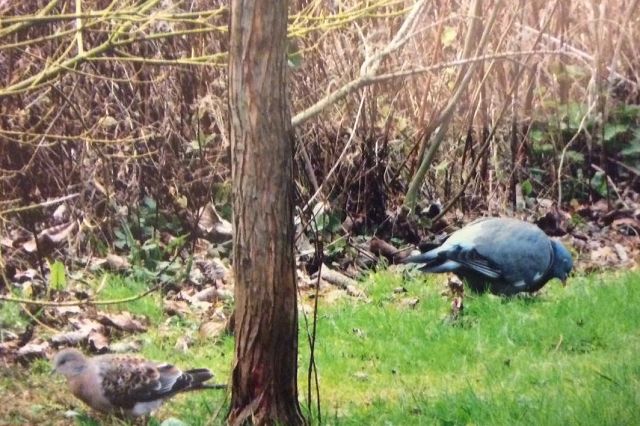 Scans of a selection of the images, depicting the Otford Oriental Turtle Dove, sent to Barry Wright on 22 March 2016.

I phoned John straight away but his wife said he wouldn't be home from work until the evening. With Otford as the only clue and the exact address being unknown — John was a friend invited to see the bird, not the home owner — I spent about six hours fruitlessly wandering around the village, even parking opposite the bird's as yet unknown locality!

Having spoken to John in the evening, it transpired he was certain the bird was still there the previous week, but the house owner, Tony Rose, was now away on holiday and didn't want news of the bird's presence to be released. I did manage to ascertain it was on the estate behind the VW garage, but not the exact house and garden. That evening I tweeted out photos of the bird that John took.

On Sunday 3 April, I checked the area from dawn till dusk along with a few hardy souls, but there was no sign of the dove. Over the next week daily visits by Martin Warburton failed to locate it, and nor did the efforts of Andy Appleton, Chris Gibbard, Terry Laws and Steve Broyd, among others. We assumed the bird had departed.

The trail remained cold until Wednesday 27 April, when I phoned John to establish the final day the bird had been seen, so I could forward the record to the Rarities Committee. To my great surprise he indicated it was still present a few days before, so I asked if he could pass my mobile number on to Tony Rose in case the bird was still present. Martin returned to check the area but failed to find even the grain that Chris had put down nearby. Things were not looking good.

On Saturday 30 April, I picked up a message sent late the previous day which indicated the dove had again been present in the morning and evening of that day. Crucially, it also gave the rough times the bird appeared, the direction it flew in from and even the name of the exact road. Along with a few others, Andy Appleton and I established that an area along the end of The Butts would be ideal to view the trees around the back gardens the bird was favouring. A few of the Otford scouting party assembled in position from about 4 pm, including Steve Broyd who was en route home from Scotland, and sure enough at 5.03 pm Andy Lawson, fresh in from Dungeness, saw the bird fly in from the south into the trees. The rest, as they say, is history.

The bird developed a pattern of appearing at dawn for a few hours, and then again from roughly 4 pm for a similar period. It would fly into the trees and perch there before dropping into the garden out of view, and then head off south again to an unknown location. Speaking to Tony Rose, it was evident that the bird was best viewed from within the house, as it was easily spooked if anyone went in the garden. But this was not a practical arrangement for the family, hence their reluctance to publicise the exact location.

How we'd missed it before could have been down to our positioning for the short periods it was on view, the lack of food in the garden while the family was away on holiday, or simply the speed it shot in overhead and disappeared from view. Once its presence became known and routine established, however, the residents embraced the 'event'. I spoke to Tony a few times and thanked him on behalf of everyone for tolerating our presence on this quiet estate. A few local children even took orders for tea and coffee, which was a great gesture. Housing estates are never easy venues for twitches and this was no exception, but the behaviour of the birders visiting was impeccable.

It was potentially my worst-case scenario as county recorder, but thankfully all turned out well in the end. The 22 hours I spent looking for the bird felt frustrating at times, but I do know Otford and even some of the residents pretty well now! It represents the first record of Oriental Turtle Dove for Kent, as well as for the London recording area.