Over that last 18 months I haven't been able to get out birding anywhere near as much as I'd like to. I have been pretty much restricted to weekend birding. But every window of opportunity I get, I bird hard!

On Saturday 3 July I had a plan. There were a lot of waders on the move locally. Numbers of Eurasian Curlew, Northern Lapwing and, in particular, Common Redshank had increased significantly at local roosting spots. Tern numbers were increasing, too. So, with that in mind I would bird the local beaches and estuaries in search of a rare tern, an early North American wader or maybe even a wader from the Far East.

Three hours later and the best my efforts could produce was a good haul of adult Mediterranean Gulls – though I took this as encouraging, as clearly there were birds on the move. The increase in redshank numbers compared to the previous weekend was obvious. So, after combing Muckross estuary, Owenahinca beach, Rosscarbery estuary and Clonakilty estuary, my final stop would be Ring village.

Ring is a small but gorgeous coastal village situated at the end of a small inlet of the Clonakilty estuary in West Cork. A creek runs through the inlet at low tide. My regular scanning routine on this section of the patch was interrupted by a meeting of two locals who happened to be very close friends of mine – the type of friends you must stop and chat to! Tadgh and Shirley were introducing me to their 4-week-old baby, Theo.

As they chatted about nappy changing and the need for reduced speed limits in the village, I began to scan with my bins through a mixed flock of gulls feeding along the creek. At the end of the group of gulls, I saw three redshanks with another similar-sized wader in silhouette. I knew straight away it was a dowitcher species. 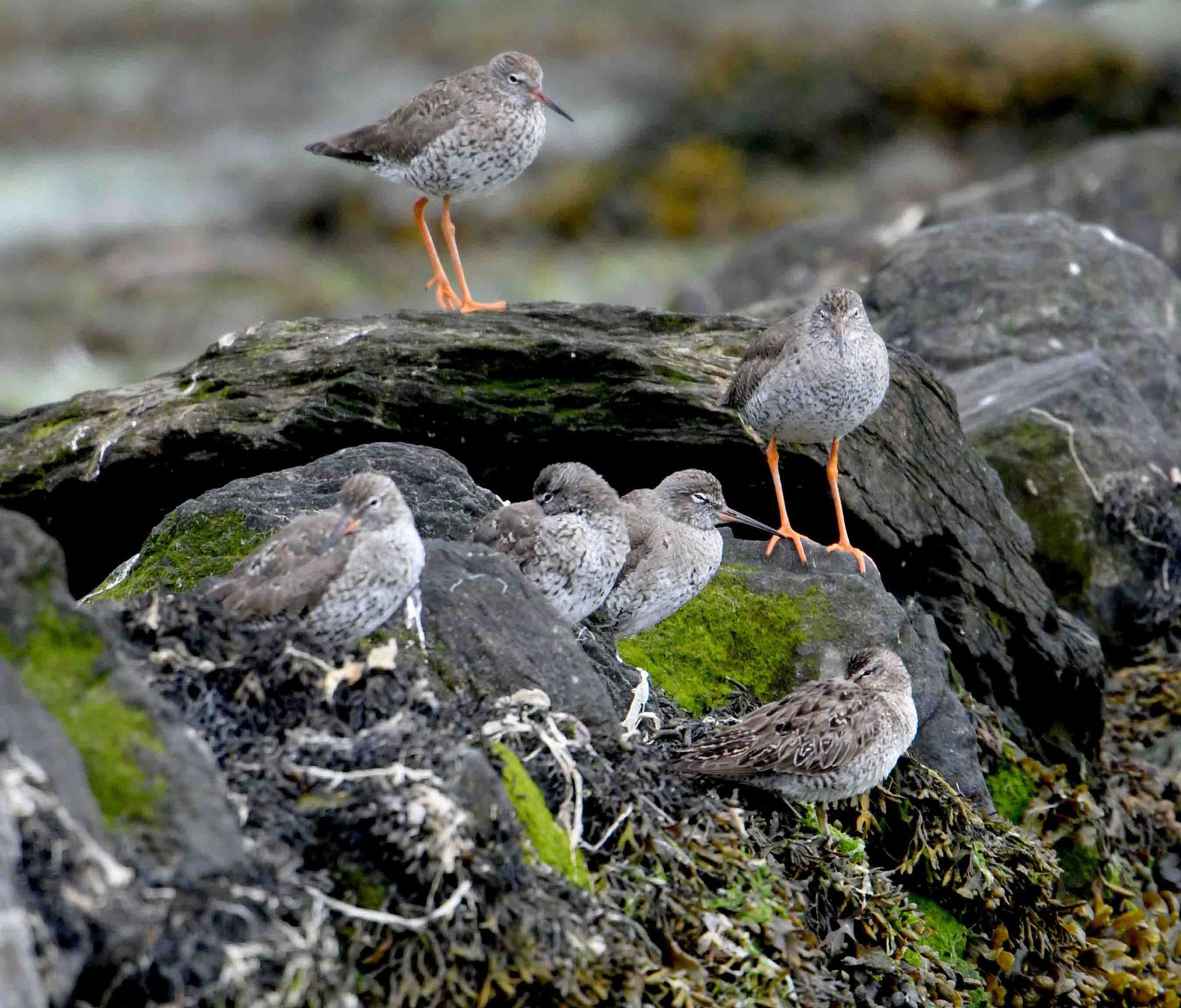 Christopher located the dowitcher among Common Redshanks, and it went on to spend much of its time with the commoner species (Richard Mills).

Of course, my automatic assumption was that it would be the far more regularly occurring Long-billed Dowitcher. I spend a lot of time thinking about birds I'd like to find on my local patch, and Long-billed Dowitcher was one of my top targets. I was already buzzing. Mid conservation I rudely interrupted my friends and explained that I had to go as I had a rare bird on the estuary. They were very familiar with my birding obsession, so fully understood!

I moved 100 m or so further up the coast road to get better views with the sun behind me. As I got the scope out and focused on the bird, I was very quickly drawn to the heavy notching on the tertials. Two weeks earlier at the Least tern twitch in Dublin I had overheard another birder say: "If I had a dowitcher under my feet I wouldn't take my eyes off it until I saw the underwing!" So, with this fresh in my mind I began to think rarer than Long-billed. 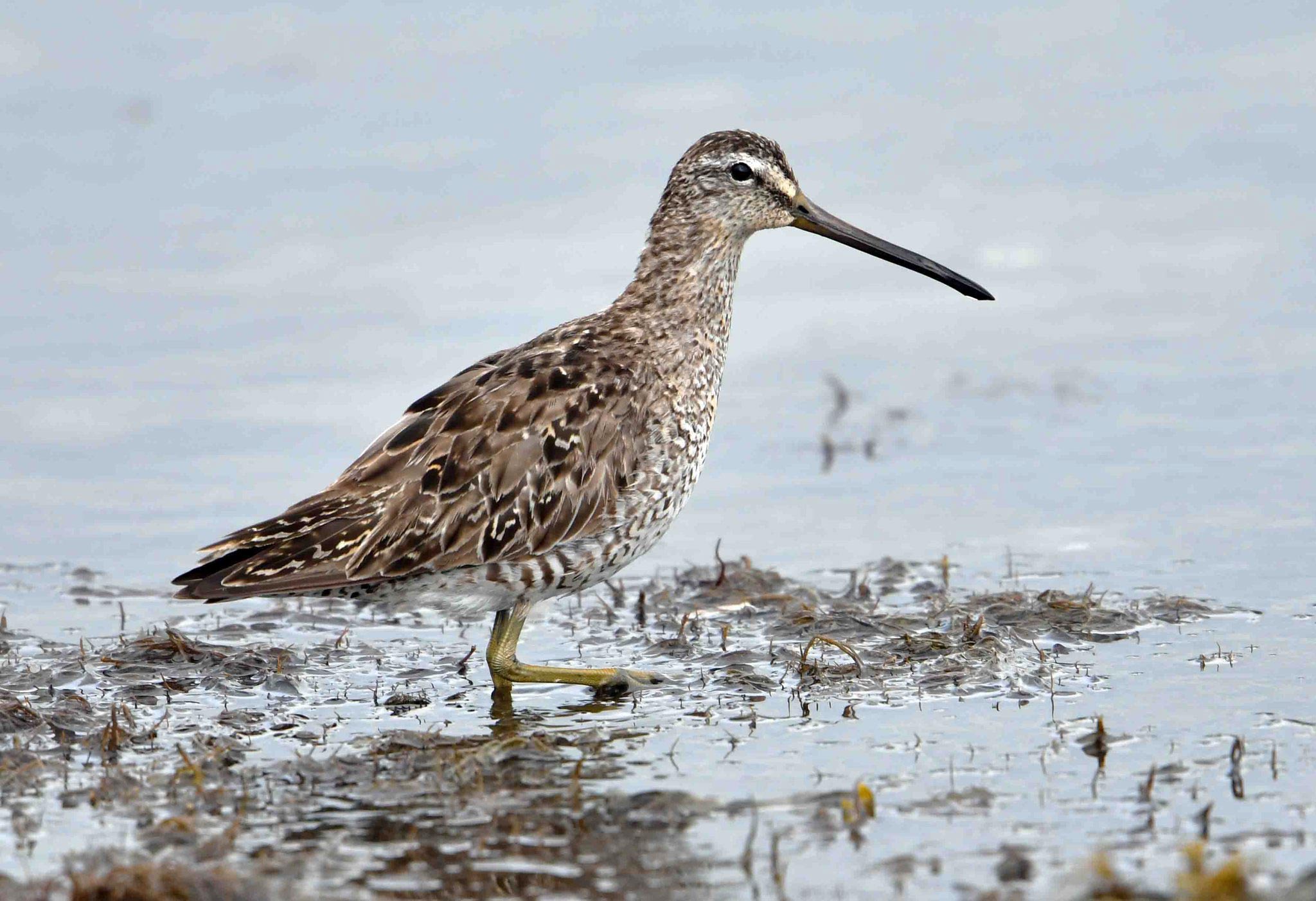 Structural features and tertial pattern had Christopher quickly querying whether his dowitcher could well be the much rarer Short-billed (Richard Mills).

I sent the first digiscoped images to a couple of birding friends and asked what I should be looking out for in the case of Short-billed Dowitcher. They noticed the 'tiger' tertials straight away and pointed out that the tertials should be plain for Long-billed. They suggested I send the images to the finder of Ireland's first ever Short-billed Dowitcher, Killian Mullarney. Killian's reaction was very encouraging, but we were all very cautious for obvious reasons. He described the key features to look out for: wing tips reaching slightly beyond the tail (in Long-billed, the wing tips fall just short of the tail), straighter 'back' than in Long-billed and the notched tertials. This bird had all of the above. He said the underwing shot would be important but hearing the call would clinch it. My ears were tuned for a Ruddy Turnstone-like call, much lower pitched than the keek keek of Long-billed.

Full of uncertainty and scared of messing it up, based on what I had observed so far, I decided to put out the news as a probable Short-billed Dowitcher. At this point two of the birders I had sent the original images to had arrived to help out and both were confident it would turn out to be Short-billed. I left my phone on record. It flew but didn't call. I wondered if it ever would – and then it did. Bingo! This was Killian's exact response when I sent him the recording of the call. I had just found Ireland's fifth – and more importantly (for some) – Co Cork's first Short-billed Dowitcher.

Later images from other birders captured the bird's underwing, showing the fine dark markings on the inner leading edge. Long-billed doesn't have this pattern, instead demonstrating a white 'hot-spot' here. 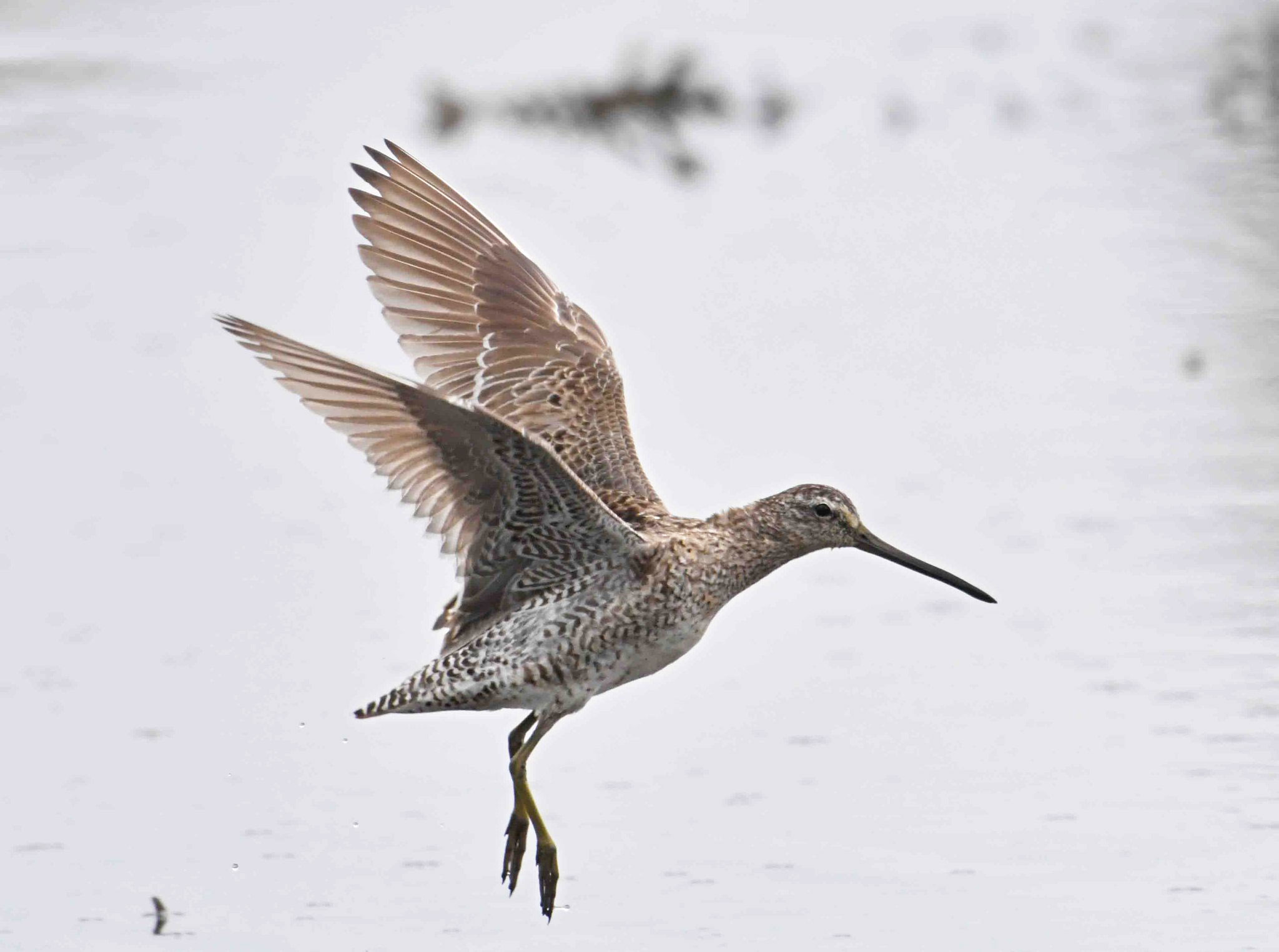 The dowitcher continued to give great views until at least 12 July, allowing for high-quality images showing the distinctive underwing pattern to be taken. Note the patterned inner leading edge to the wing; this feature is white in Long-billed (Richard Mills).

I had dipped the previous Irish record of Short-billed Dowitcher in Co Louth in the autumn of 2019, so finding my own bird on my local patch only a few miles from my front door puts this right up there as one of my best-ever birding experiences.

Christopher O'Sullivan TD is a keen birder and whale-watching guide based in Co Cork. Follow him on Twitter: @COSullivanTD