On 7 April I headed to Pulborough Brooks with my girlfriend Claire Sell, with the intention of adding a few birds to our year lists. As we approached the bottom of the "zigzags" (the path that leads down from the visitor centre before it splits), we could hear a Willow Warbler singing, and took some time to watch it and take some photos. As it turned out, that was probably our best decision for a long time, as a butterfly flew past looking similar to Small Tortoiseshell in coloration, but with flight more reminiscent of a Peacock (being slower and with plenty of gliding compared to a Small Tortoiseshell). 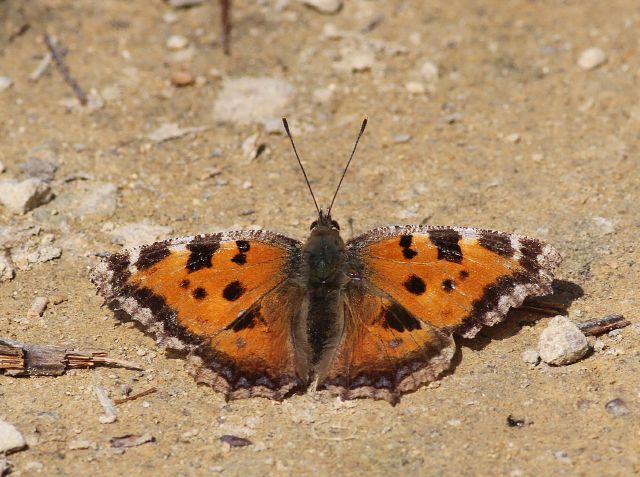 I took a photo on my phone of one of the shots on the back of my camera, and uploaded it to the Sussex Birders Facebook page, saying I believed it to be a Large Tortoiseshell and asking for opinions. After a few comments supporting that identification, Josh Jones was the first to suggest Scarce Tortoiseshell there. He cited a lack of a yellow band between the reddish upper side to the hindwing and the black border a being a key difference, and also apparent differences in forewing patterning.

After this exciting development I persisted in trying to get photos showing the leg colour. This didn't take long, as it was an incredibly confiding insect which soon took to landing on my girlfriend and I when it wasn't sitting on the path or chasing away other butterflies! The front pair of legs were clearly pale straw-coloured over much of their length, and at this point I felt confident to announce it as Scarce Tortoiseshell. Josh put the news out on BirdGuides, and my girlfriend walked up to the reserve visitor centre to let them know. 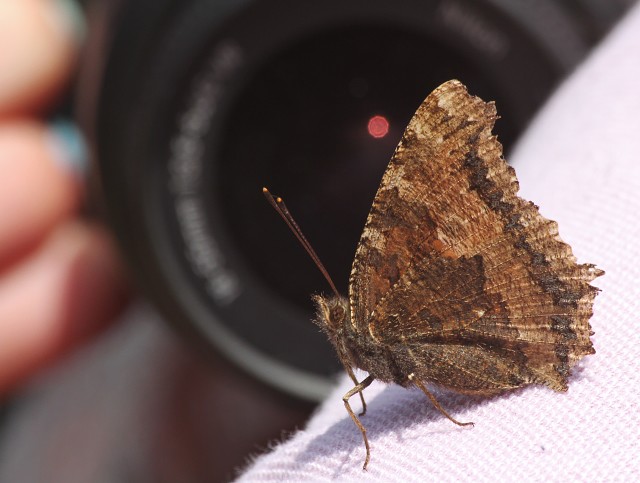 While waiting for others to start arriving, I continued to watch and photograph it. It was very territorial, and gave chase every time a Brimstone or Peacock came into sight, pursuing them until they left the area. When it was chasing Peacock, the large size was evident — the two looked similar in stature. As previously mentioned the flight style was clearly different from Small Tortoiseshell, being similar to that of Peacock with a lot of gliding. There were clear but small signs of wear on the upperwings in places, suggesting that it was an individual which had emerged from hibernation. With that considered it was still in great condition, and was a very smart and educational butterfly. 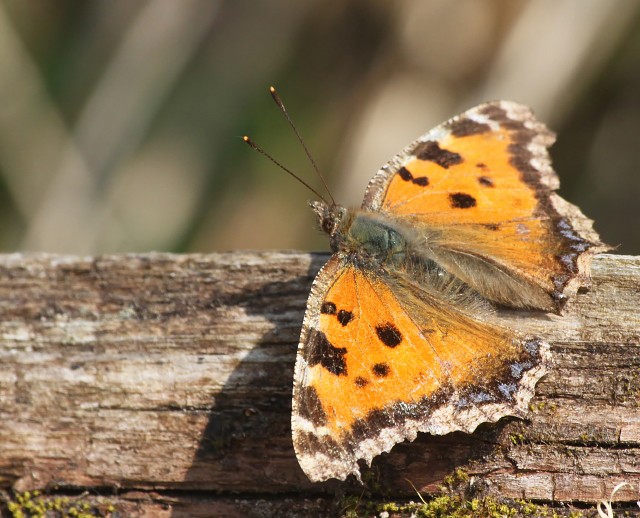 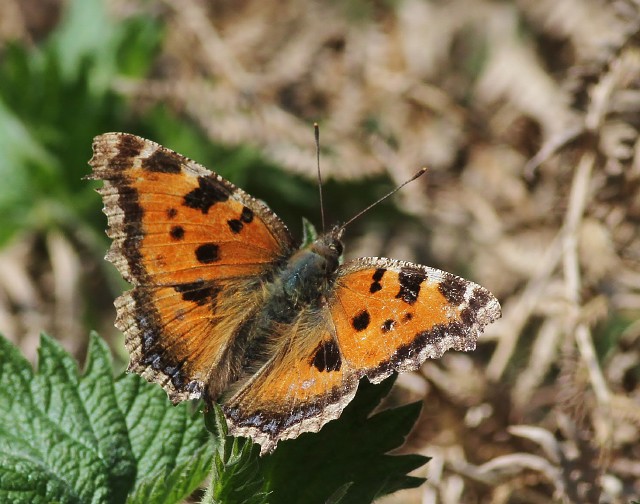 George Kinnard soon arrived with his Granddad, Roger Billings, and they joined us watching the Scarce Tortoiseshell. By this point, though, it was spending most of its time higher up in trees, and by the time a small crowd of observers had formed, it had become very flighty and wasn't settling. After about 14:40 that day there were no further sightings, despite several people looking. I visited Pulborough again the following day, and again, despite large numbers of people looking, there were no sightings. It was then seen again for a few hours during the afternoon of 9 April but searches throughout 10th drew a blank. It's anyone's guess on how long it may stay (or indeed whether it'll appear again), but hopefully it might finally allow large numbers of observers to connect with this species in Britain.

Scarce Tortoiseshells in Britain in 2015

The Sussex sighting is part of an unprecedented spring emergence of the species in Britain. Following last summer's influx (before which there was only one UK record, in Kent in 1953), it appears a number of Scarce Tortoiseshells have survived the UK winter for the first time and, over the past few weeks, have begun to emerge. At least five individuals have been seen so far: at Holt Country Park, Norfolk, on 12–13 March; Fowlmere RSPB, Cambs, on 21 March; Holme, Norfolk, on 24 March; Felixstowe, Suffolk, on 27 March and 2 April, and now also in West Sussex. Only time will tell whether the species has successfully bred in Britain but further sightings do seem likely, and birders should be wary of any 'large' tortoiseshells seen this spring and summer.

Revered wildlife illustrator Richard Lewington has kindly allowed us to reproduce his stunning artwork and annotated notes on how to separate the similar Large and Scarce Tortoiseshells. Much more about Richard and his artwork can be found at www.richardlewington.co.uk. 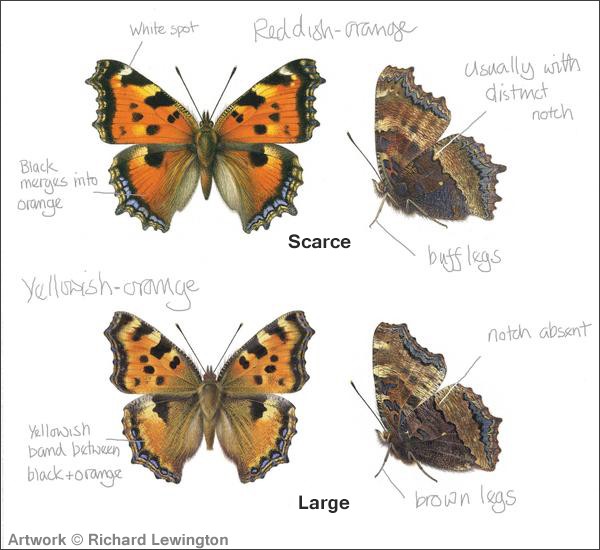