The amazing autumn for rarities in 2020 on Tiree was always going to be a hard act to follow. How could autumn 2021 possibly compare with three firsts for Argyll (namely Dusky Warbler, Hume's Leaf Warbler and Pine Bunting), plus of course the Yellow-bellied Flycatcher, which was a first for the Western Palearctic! Well, September 2021 started encouragingly. A period of high pressure and slack winds in the first two weeks saw a nice turnover of scarcer drift migrants in the bushes, such as Common Redstarts, Pied Flycatchers, Lesser Whitethroats and Garden Warblers, plus a couple of Barred Warblers and Common Rosefinches, as well as two Pectoral Sandpipers on the lochs.

This spell culminated in a surprise Arctic Warbler, found by sheer fluke feeding in roadside umbellifers at Balinoe on 12 September. It was the first record for Argyll and I shared it with fellow regular Tiree birder, Keith Gillon. The winds then started to switch to the west and thoughts turned once more to Nearctic visitors.

Good coverage by visiting birders later in the month resulted in the excellent find of a confiding juvenile Semipalmated Sandpiper at Clachan by Michael Thornton on 23 September. A female Ring-necked Duck appeared on Loch Bhasapol, quickly followed by a drake at Loch a' Phuill; the two birds then joined up together at the former loch on 29 September. The weather chart that night looked very interesting with a warm front passing through the Hebrides coming off a deep fast-moving Atlantic depression. I fantasised about what the warm front might drop into our garden at Balephuil and set my sights on finding a Red-eyed Vireo the next day – a still much needed Tiree tick. 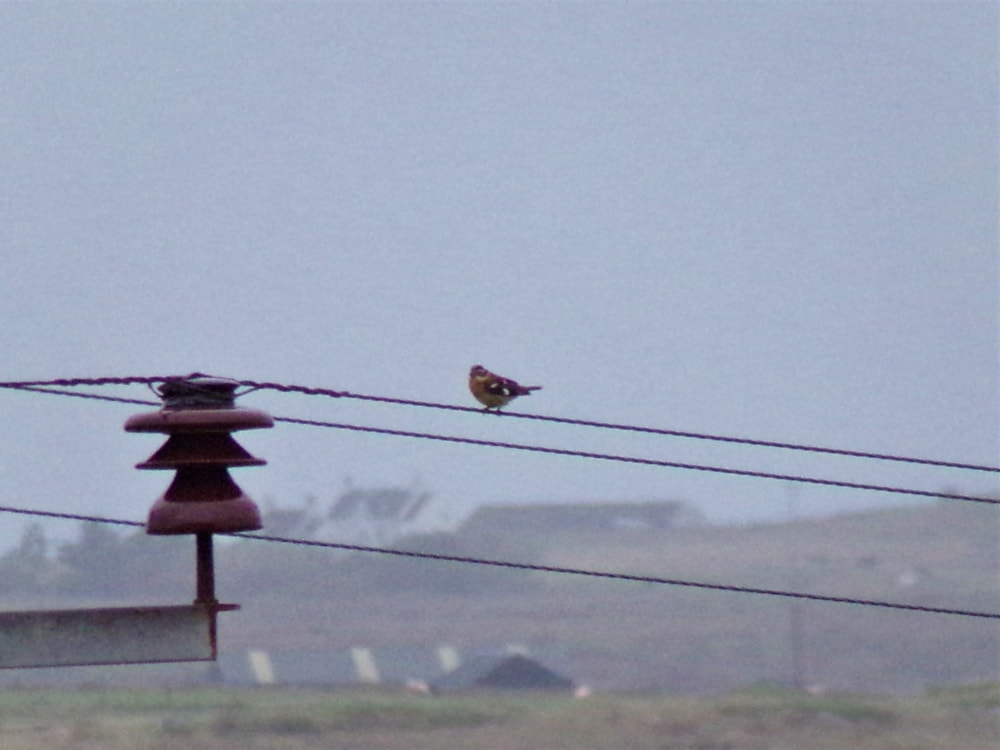 John's first views of the grosbeak on wires near his house (John Bowler).

First light on 30 September saw me opening our upstairs bedroom window to scan the willows and other bushes around our front drive. Little was moving in the rather wet and windy conditions, but a Goldcrest was calling. Then, something dark with bold white wing patches lifted up out of our rose bushes and headed into our neighbour's garden.

Unsure of what I had just glimpsed, I got dressed and headed out to check the gardens. A large, slow-moving warbler in the lower branches of our sycamore had me going briefly, but it turned out to be a female Blackcap, the first on the island for over week. There were also a few Common Redpolls, a Willow Warbler and a late Swallow, but there was no sign of the mystery white-wing-patched bird. Had I simply imagined it?

It was still only 8.30 am, so I headed up to the bushes on the hillside above our house at Carnan Mor to see if the mystery bird might have gone there. These bushes used to be a great place to find scarce migrants, but most birds now seem to turn up in the gardens nearby at Balephuil instead. The maturing Balephuil gardens now hold more extensive and denser cover, while the Carnan Mor bushes these days are often simply a stakeout for raptors awaiting unwary exotic meals.

My check of the bushes revealed two Eurasian Sparrowhawks and two Hen Harriers, a European Robin, two Wrens and a very skulking Song Thrush. The elevated hillside is also a good place to observe bird movements and I stopped to scan around, picking up a group of three Whooper Swans heading south down the coast plus a lone noisy Barnacle Goose heading south in the low cloud.

With little to show for my efforts I started heading back to the office at Balephuil, but at 9.15 am two things happened. One was a text from Jim Dickson saying that, together with Stuart Gibson, he had just glimpsed what he thought was a Woodchat Shrike further along our road. It had headed off north-west towards the main road. The second thing was that I espied a large chunky passerine showing massive white wing patches on dark wings flying over our garden, calling a hard tik and landing on overhead wires.

I lifted my bins to be confronted not with a Woodchat Shrike, but instead with a glorious first-winter Rose-breasted Grosbeak! Familiar with this species from trips to North America and from perusal of photos of the recent individual on Unst, I simply soaked up the bird's many features. Most striking were the two bold white wing-bars with a prominent extension on the primary bases, therefore making this a male. 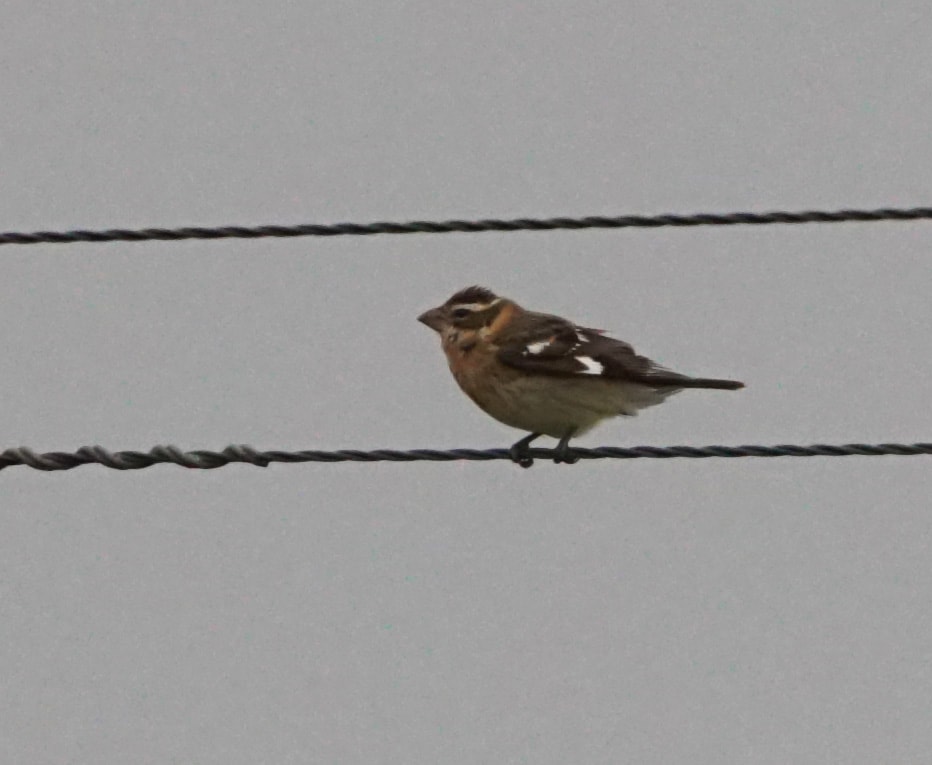 A handful of other birders were able to connect with the Nearctic mega (Jim Dickson).

There was also a bold white supercilium, dark lateral crown stripes and a central paler crown stripe, bold white sub-moustachial stripes contrasting with dark ear coverts and rich buff tones with a dash of pink on the chest. Add to this some white spots on the tertial tips and dark streaking below and there was a lot to take in. All the while the bird was calling a sharp tik call and twisting and turning on its perch.

I rattled off a few record shots with my bridge camera and then the bird lifted off the wires, revealing rich pinky-red underwing coverts before flying back up our road. I phoned Jim to alert him of the bird's identity and location and he picked it up landing on wires in front of him, Stuart Gibson and David Jardine, while still on the phone to me.

I headed down to join them on the road and it transpired that they had all obtained good but brief views of the bird perched on overhead cables. They'd managed to get some closer shots of it before once again it had headed off north-west towards the main road. Many hours of searching, often in heavy rain, eventually relocated the bird briefly at Main Road Farm at 1.30 pm, but it quickly went to ground once more and was not seen again.

The Rose-breasted Grosbeak was the first record for Argyll and puts my garden list on 190 species, now including four different Nearctic passerines. Perhaps the next warm front will finally bring me a Red-eyed Vireo – we shall see! 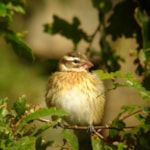