The morning of 29 September began, as most mornings do on remote island birding trips in autumn, full of hope. We were six days into our two-week stint at Roseveer Cottage, and our evenings were spent discussing American birds and favourable weather systems from previous years. The prevailing westerlies looked promising and I had high hopes for the trip.

A cold front had passed the previous night and we were well into the initial wave of predicted south-westerly winds. Overnight rain had cleared and a bright morning was unfolding on St Agnes. I had spent the first half hour of daylight birding my way down to Wingletang. Past the parsonage, and along Barnaby Lane, a sunny patch of elms held a Pied Flycatcher and a Firecrest in places I hadn't visited the previous day, which inspired some slow and concentrated birding, lots of pishing and being methodical. After nothing else of interest for an hour or two, I gave in to just walking about enjoying the scenery and more common migrants; a group of White Wagtails held some particularly good-looking individuals and I began photographing these, along with one or two Northern Wheatears.

I had pretty much got into the stride of another day of walking around the beautiful island, not really seeing anything new, when a bird flew up out of cover onto an exposed granite ledge. The obvious features from a distance of about five metres and with the naked eye were its contrasting areas: it was a dark bird with a bright white supercillium, white median crown stripe, white tips to the median and greater coverts, and pale below, and the size and shape seemed at odds with birds I'd expect to see on that headland-type habitat. I quickly got my bins on it and – whoa! – a Rose-Breasted Grosbeak, turning a blackberry over in its huge pale pink bill and looking totally out of place on a lichen-covered granite boulder. I took some record shots and then watched it again in the bins for 10 or 15 seconds. Its mantle streaking looked amazing and I noted its white throat, white tips to the tertials and fine streaking on the buff and white underparts and chest. It dropped back down into cover of bramble, bracken and pittosporum.

The next few minutes are a kind of dreamscape, like a cartoon – I had seen the bird well and was looking at the back of my camera in disbelief, and knew I had to get other people onto it. I tried my phone but there is generally no signal on this part of Wingletang. I had to leave the bird, though this felt like both the best and worst thing to do at the time.

After running 200 m towards higher ground I eventually got a signal and rang my housemates Laurence Pitcher (LP), Lee Amery and Graham Gordon, blurting out: "I've found a Rose-breasted Grosbeak" to each of them one by one, as well as stammered directions. After five or six minutes, LP arrived after an athletic sprint from the other end of the island. In a few more minutes, the others arrived plus some of the more regular St Agnes birders and locals – however, the bird was nowhere to be seen. An hour or so later, and birders from St Mary's were arriving with the bird still missing. Although pleased to have found it, I had a real worry it wouldn't be seen again, and as most of the thinking was that it had recently arrived before my finding it, it could well seek cover in the interior of the island.

Fortunately, it was eventually pinned down to a couple of spots near the post office and to my knowledge, everybody saw it well. It stayed around for another three days and was incredibly tame, hopping around on the path, feeding and showing down to two metres! The views were excellent and I was able to take in more features and habits. A short burst of flight between brambles exposed the buffish yellow underwing of a female and I heard it call once or twice.

Its tameness may have had something to do with the bird’s disappearance – there are a few wily old cats in the area, one of which was rather expertly 'missed' by a stone thrown by a St Agnes regular after it had seen the grosbeak sitting there munching away.

This was the first of a run of rare North American birds on Scilly so far this Autumn, a completely new bird for me and I'm very glad to be part of what will hopefully be a very memorable year. 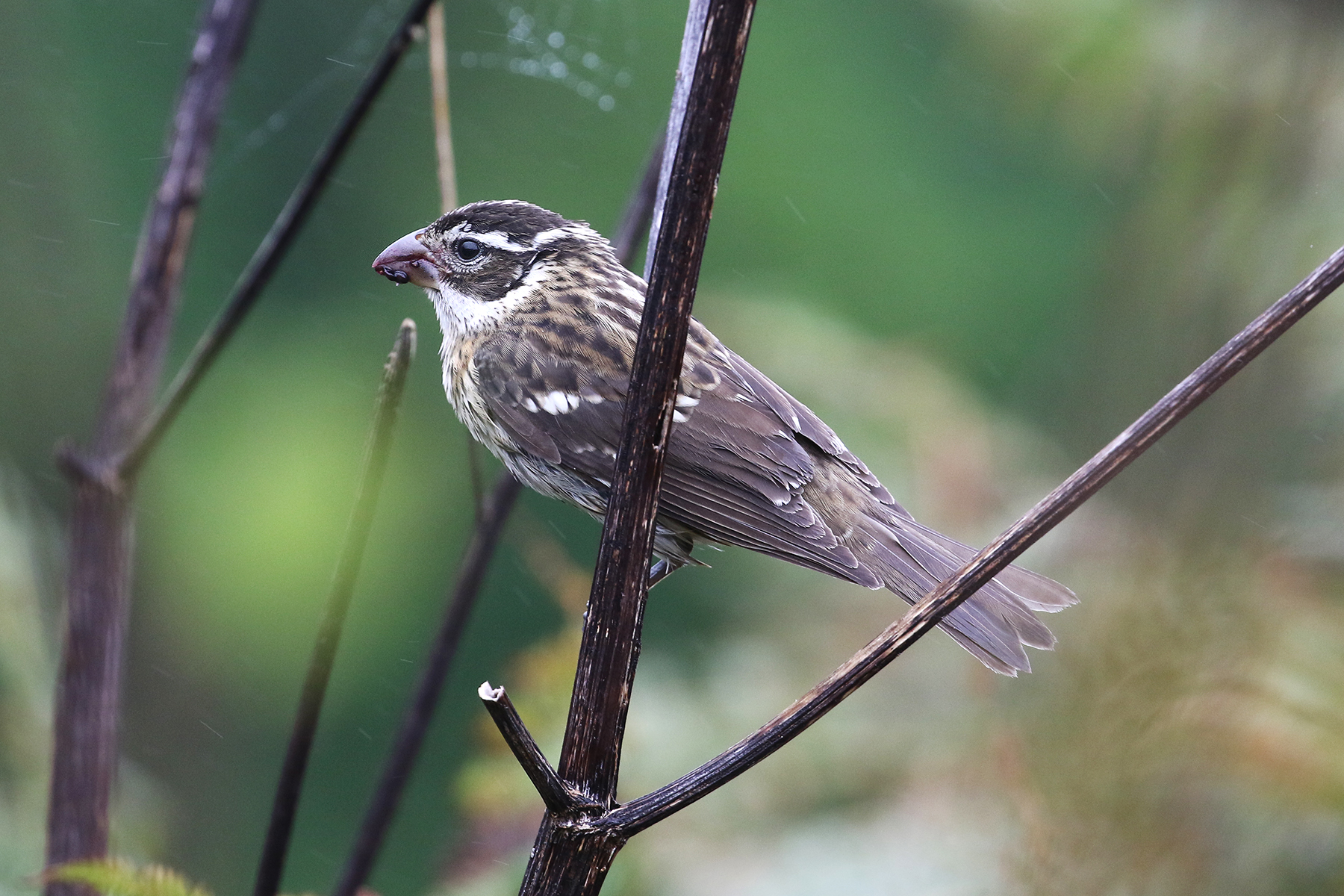