Not every finder's account commences more than 40 years ago but here goes … I remember visiting a second-hand bookshop in Eastbourne, East Sussex, with my father back in the late 1970s and there, tucked away on a bottom shelf reserved for larger books, was volume two of The Book of Birds. By then, commencing senior school, I already had a basic knowledge of birds primarily seen in Sussex as my parents were very keen birders and had encouraged an interest from an early age.

While the front cover included what were by then the already familiar family names of owls, woodpeckers, flycatchers, thrushes, warblers and so on, upon opening the book there was literally a whole 'New World': completely unfamiliar and brightly-coloured passerines, the likes of which I'd never seen before! I immediately wanted to own the book and was thrilled when my Dad agreed to purchase it for me – it became a prized possession. 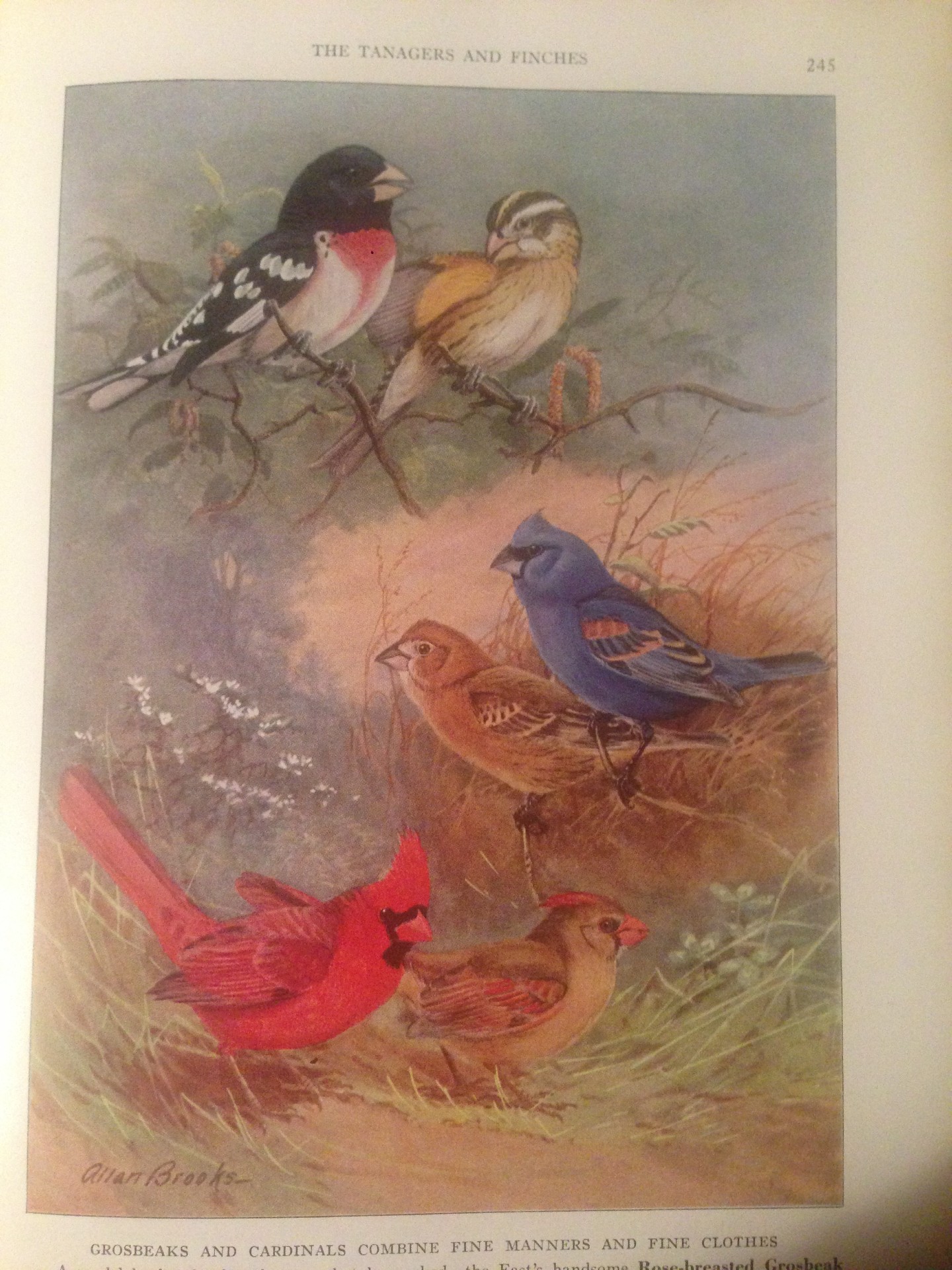 Owning the book proceeded what was first of five annual October family holidays to the Isles of Scilly. The prospect of seeing some of the American landbirds depicted in the book was exciting and by reading some of the text I gained my first understanding of what might be possible, as it included a chapter titled 'Our greatest travellers' that included maps captioned: 'A rapid migrant is Grey-cheeked Thrush … Black-and-white Warbler is a slow migrant … American Cliff Swallow migrates by day .. and Blackpoll Warbler migrates at night'.

Our first week of our first visit to Scilly produced a Red Kite, a Richard's Pipit, two Greater Short-toed Larks and a Rosy Starling but the only 'Yank' was an American Golden Plover. Of course, that wasn't in my book – I only had volume two. But then, while near Holy Vale, a birder arrived to say that there was a first-winter male Rose-breasted Grosbeak on the Garrison! The moment had arrived – I felt prepared and I knew, or thought I knew, what to expect.

In those pre-taxi days, running was the norm but we were soon there to join an assembling crowd. And there it was, my first American landbird. Initially I remember being a little disappointed that it didn't really resemble the illustration of a male in my book … but then it flew, and wow! I still remember the bright pink flash on its underwings – those were still the days when so often you still had to see a bird to learn its appearance. 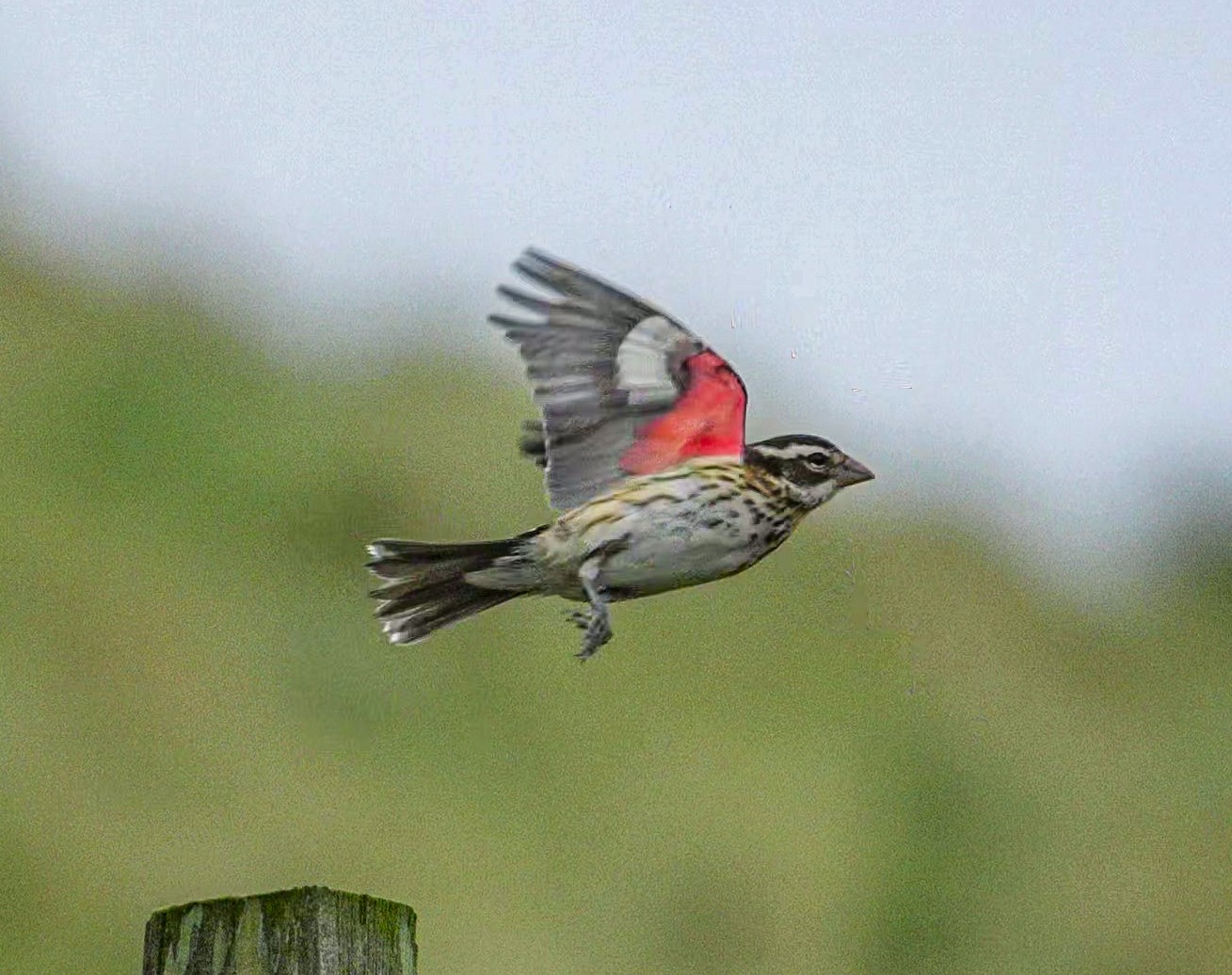 Those five annual holidays, in what’s now oft-referred to as the 'golden era' on Scilly, produced many more American landbirds, including another Rose-breasted Grosbeak. But while we enjoyed some good finds, ours all came from the east. Foreign trips followed and became my focus and, in between, living and working in Sussex, offered few chances to find any vagrant American landbirds …

By moving to Unst five years ago, my hopes of finding an American landbird were rekindled. The resident birders had enjoyed finding their fair share – who could forget Mike Pennington's Cape May Warbler, Brydon Thomason's Baltimore Oriole or Robbie Brookes's spring Myrtle Warbler! We moved ourselves and literally the day we arrived in May 2016, while we were unloading our hire van, my parents' text news of Shetland’s first Rose-breasted Grosbeak – a 'proper' male – being found on Burra.

I saw it the following day on my way to return our hire van to Aberdeen. But five years on, it's fair to say it was beginning to feel like Unst was no longer producing American landbirds … in fact, just an escaped Painted Bunting and I hadn't even found that! Was I the curse? In the five years I’ve lived here I’ve been the fortunate finder of some top-drawer rarities from most points of the compass – Brunnich's Guillemot and Tengmalm's Owl from the north, Siberian Accentor and White's Thrush from the east, a Fea's-type Petrel and Marmora's Warbler from the south … but what about from the west? Not so much – a few scarce waders and a Bonaparte's Gull, and that was it.

Last year, I'd perhaps come a little closer when eight-year-old Darcy Cook found a White-crowned Sparrow in her parents garden on the neighbouring island of Fetlar, Dougie Preston found a Tennessee Warbler on Yell while I was working just down the road and then, this spring, Robbie Brookes found a White-throated Sparrow in his garden on Unst …

This last week I wasn't alone in eyeing up the fast-moving warm fronts tracking east from Newfoundland. An American Yellow Warbler had made landfall in Iceland, then an Alder Flycatcher … over the last week nobody could fail to notice the westerly gales and atrocious weather that we were experiencing! 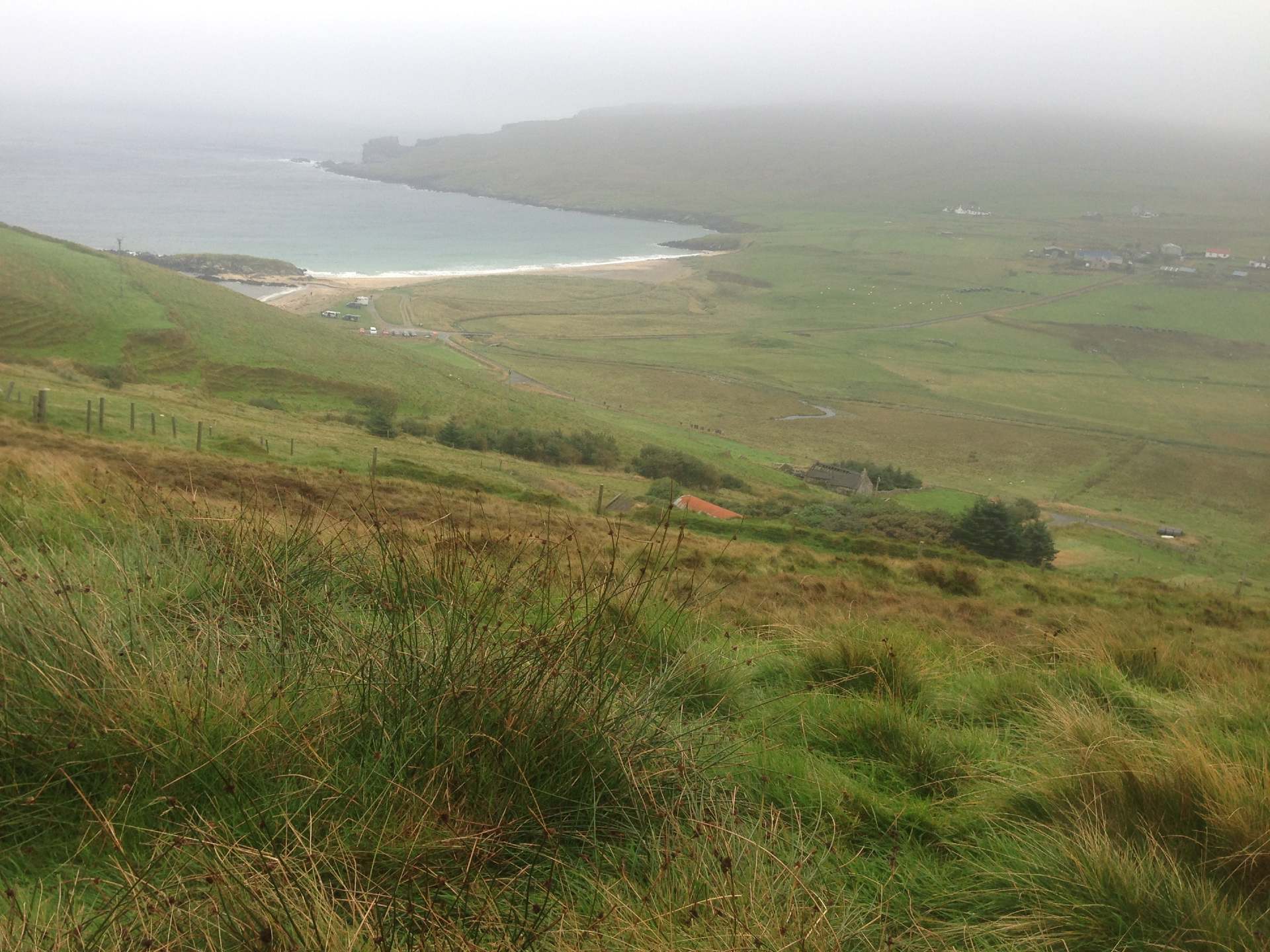 Three days ago, good friend and fellow Shetland birder Will Miles found an American Buff-bellied Pipit. Tough he wasn’t on the archipelago, but out on St Kilda. In recent years, the Western Isles have again come to the fore as being the prime place to find an American landbird, adding both Yellow-bellied Flycatcher and Ruby-crowned Kinglet to the British list last autumn alone. It's no real surprise that some of the rarity-hunting teams formerly working Shetland have now moved their attentions there. Will kindly sent me a message of encouragement to say that he felt Shetland was bound to score, too …

News from Iceland revealed a large number of birders had headed south-west in the teeth of the gales and found a trio of American Buff-bellied Pipits there – game on. I spent my time walking beaches and lonely headlands, peering down geos and seeing plenty of Rock Pipits. I'd even started looking at wildfowl and waders – desperation was clearly setting in!

Freda Gray, the owner of Valyie, very kindly welcomes birders into her garden. On a visit two days ago I'd bumped into one of her sons, Duncan, who said words to the effect that he was sure that I wasn't seeing any birds as the strong winds were exactly in the wrong direction. I quickly confirmed that was the case, to which he replied 'unless you find something blown in from America!' I smiled, explained how rarely that happened, but he assured me that it had happened twice before. The garden at Valyie has previously played host to a Red-eyed Vireo and a White-throated Sparrow, but of course, it has been very well-watched for many years – the odds didn't seem that great! 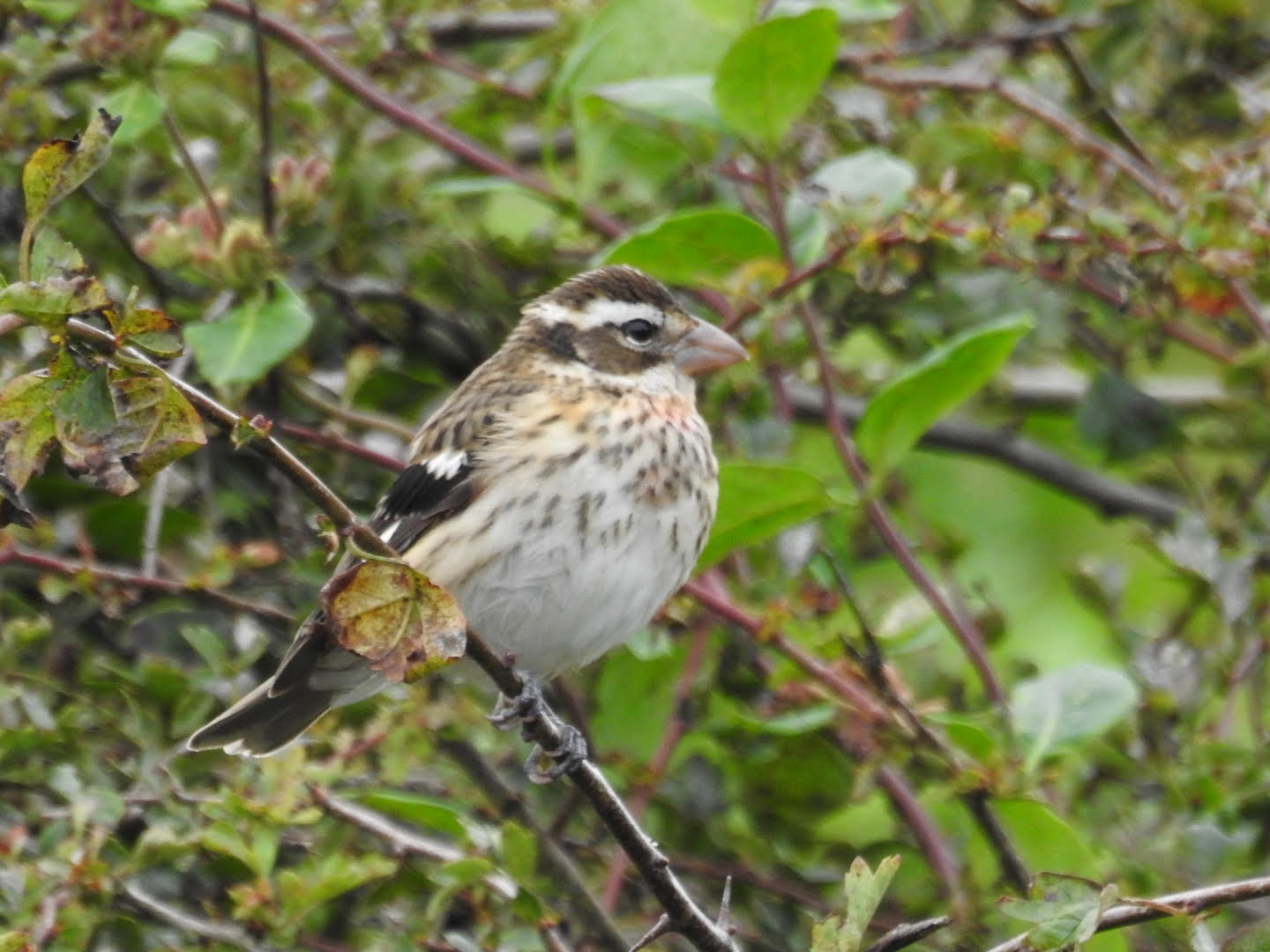 Late yesterday evening I noticed that a Hornemann's Arctic Redpoll had been found in south-west Norway. I’d seen a quartet of frosty redpolls yesterday and it seemed a much more realistic find target. But, during a late evening look at an aurora, I'd also noticed a ship offshore heading east lit up like a proverbial Christmas tree. Interesting; from where had it come…?

Out at dawn on 25 September, I decided upon a quick visit to Norwick beach and then a look at the nearby crop fields for any redpolls as that was unlikely to disturb any residents at an early hour. It was nice to be out in the calm conditions albeit it was soon evident that most Sanderlings had departed overnight.

A few Eurasian Skylarks were calling overhead and a walk around the first fields produced the anticipated flock of Chaffinches, but I couldn’t see any redpolls among them. Most of the Chaffinches flew to a nearby small plantation of pines and were sitting out in the first rays of sunshine. As I approached the plantation I heard a short series of calls that I couldn't place – a metallic but soft, almost thrush-like quip quip quip. A noisy Blackbird then took flight and I heard no more calls. I arrived at the next fields and looked through the Chaffinches but again couldn’t see any redpolls.

It was a couple of hours too early to make a visit to Freda's garden at Valyie, so my mind was already set to head to Skaw. However, as I glanced towards the garden I noticed a bird sat near the top of one of the largest pines in the early morning sunshine. I raised my bins and thought 'what's that?' There was sat what appeared an outsized Whinchat preening itself! Being very distant, really all I could see was its prominent pale supercilium and pale patch at the base of the primaries. It almost looked like a Rose-breasted Grosbeak but surely not!

I grabbed a few record shots and decided I'd walk a little closer … another look and I could see its bill shape – bloody hell, it really was a 'grosser'! I watched almost in awe and in those first few seconds it chose to raise its left wing to preen the underside and, 42 years on, I was again being blown away by those bright pink underwing coverts! 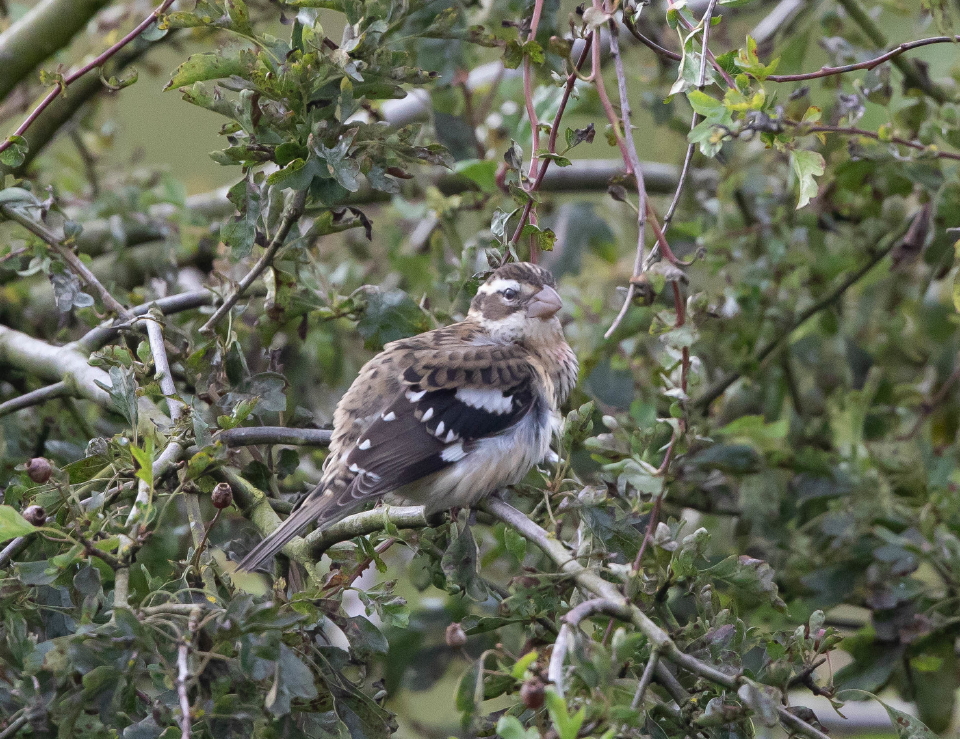 What to do next? It was only 7.25 am and far too early to go requesting Freda's permission to release the news. But then a break of luck – at 7.30 am, Freda appeared at her door having noticed my presence. I immediately apologised for being there so early and told her there was a Rose-breasted Grosbeak in her garden and from where it had come and how her son had even predicted it!

Thankfully, she broke into a smile and her reply was a simple, almost euphoric 'wow!' She seemed genuinely excited. I explained there'd be plenty of people interested in seeing it and asked if she would mind me letting others know. She replied favourably. I never have phone signal at Valyie and it's set upon a steep slope. Rarity finding there keeps me fit as I have no option but to climb the near-vertical slope up to Holsens road to broadcast any news.

I began my ascent and a third of the way up glanced back at the garden and I saw the grosbeak chasing a Common Starling – great, it was still present. I made it to the road, signal appeared, I gathered my composure and sent the messages. My phone went into meltdown receiving lots of replies and the first birders were already arriving before I'd made my descent back to the garden. It took nearly 30 minutes before it again broke cover when it flew in from behind the gathering crowd giving its resonating quip quip quip call as it did – the mystery call I'd heard now resolved!

Saturday proved a popular day to find a rarity being at a weekend for the resident birders, with several of the first of the autumn's visiting birders leaving the isle today but still having time to see it and others just arriving.