Many birders will have personal stories of triumph or tragedy associated with the Northumberland Bridled Tern. This is mine: a tale with a bizarre twist which has convinced me that there is a birding God.

Nowadays, I very rarely twitch outside my home region of northeast England. Lengthy motorway journeys have lost their appeal and my job is not very flexible. So I have to rely on the birds to come to me! Hartlepool's White-throated Robin, Western Orphean Warbler and Thrush Nightingale have all vindicated this policy over the past three years. And Northumberland's first Collared Flycatcher in May was also gratefully received.

So imagine my joy — and dismay — when Tim Cleeves texted me mid-afternoon on Monday 1st July with the terse message 'Bridled Tern. Inner Farne.' Joy at the prospect of 'unblocking' a bird that everyone of a certain age seemed to have seen in 1988 — and dismay at my availability throughout the week. I work for the BBC in regional TV news as a reporter and producer. Monday I was doing live broadcasts from Durham until 11pm, Tuesday I was office-bound, Wednesday a 13-hour shift on the newsdesk.

Perhaps I could swing a day off on Thursday? Yes I could! The 12:00 boat was booked to Inner Farne. Tim and Maurice Hepple came along for a year tick for their Northumberland lists (!) having seen the 1988 bird on its journey round the British coastline from Anglesey.

However, the bird did not come into roost at the Inner Farne jetty on Wednesday night and there was no news on Thursday as we embarked. Ah well; a day out on the Farnes is always a fantastic birding experience. But then, as our boat approached Inner Farne at 13:00, news that a warden had seen the tern! It hadn't hung around but we were confident. Five hours and a lot of scanning Arctic Terns later, the last boat took us back to Seahouses. UnBridled disappointment.

Friday July 5th and I'm producing the 18:30 programme. It's Wimbledon semi-final day, Murray's game is second, Djokovic is embroiled in a five-setter and the 'teatime' news may not go out on BBC1 before 9pm. And then, mid-afternoon, the Bridled Tern settles in at Cresswell Pond: on the mainland, a 40-minute drive away from my desk — a desk I could not vacate! Still, the weekend approached. But I couldn't go on Saturday as I had a work commitment at RSPB Saltholme — and Sunday was my daughter's birthday barbecue. The bird was going to have to stay into a second week.

And then a scheduling chink of daylight. The regional news would be slipped in between the Wimbledon semis. I could be out of the building by 7pm! I was at Cresswell Pond by 8pm but the bird had flown. However, one birder had seen it heading down to the rocks offshore from Cresswell Ices. He and I decamped and he relocated it at 8pm. Result! We watched it flying over the sea with its very distinctive long-winged languid flight, almost like a frigatebird (!) before it headed up Druridge Bay. It wasn't seen again that evening nor, infamously, did it reappear at Cresswell the following morning for the weekend throng who'd been waiting all week for their chance to catch up with the ocean wanderer.

Saturday was the hottest day of the year so far. I had agreed several weeks before to do a series of talks at RSPB Saltholme on Teesside about the BBC Summer of Wildlife. My talks were in a meeting room inside; the sheep-shearing demonstration outside was far more popular! In my half-hour lunch break I took my sandwiches to the nearest hide. A smart group of Black-tailed Godwits, a Little Egret, a Water Rail and a flypast dark-backed tern.

I raced out to the car park. Two other birders had seen the bird fly over. "Was that the...?"
"Yes," I said. "I saw it last night and I'm pretty sure I've just seen it again."

Happily, many of Teesmouth's finest were at Saltholme enjoying the sunshine and they rapidly fanned out across the reserve. I stayed put, alone, overlooking the ternery on the main pool. The bird seemed to be attracted to gatherings of terns. And then — it was back! Flying in over the pool, the Bridled Tern in all its chocolate-backed, gleaming white glory with that signature lazy flight. It came in low, attempting to land among the Common Terns but they weren't too welcoming and after a minute it headed back across the reserve. 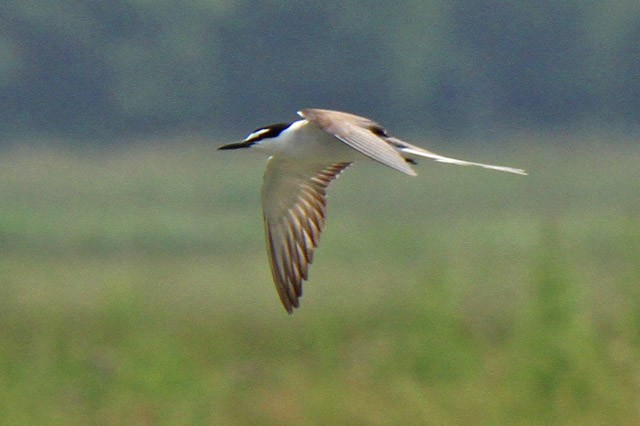 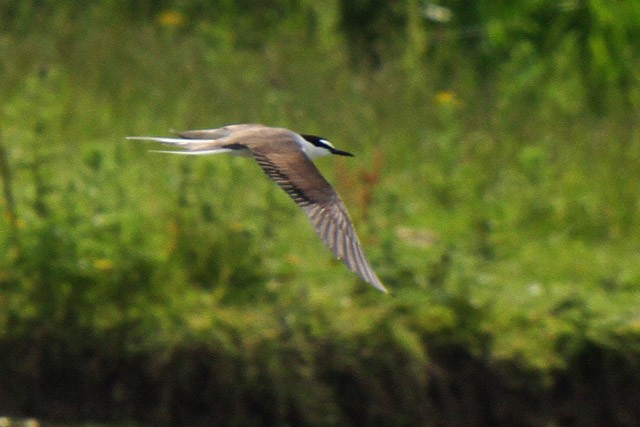 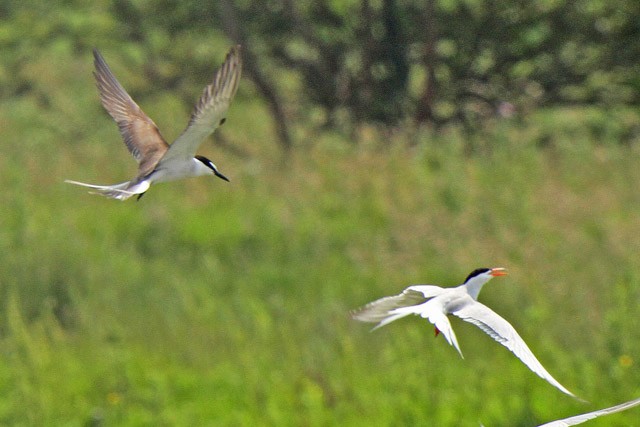 I was experiencing a profound sense of disbelief. I had been probably the last person to see the Bridled Tern in Northumberland the previous evening and now, 40 miles south, I was the first person to welcome it to Teesmouth! I phoned out the news, I texted, I tweeted and then I had to return to my lecture room as mayhem ensued outside. For Durham and Teesmouth birders it was a massive county tick. The bird lingered on the reserve barely an hour before heading out to sea and, eventually, back to Northumberland.

As I packed up my laptop later that afternoon, one of the RSPB staff said: "We were having a lovely family open day here at Saltholme — but then all these birders turned up chasing some rare bird!" I made some sympathetic noises — but couldn't keep the grin off my face as I headed home to Tyneside following a double helping of Bridled Tern in two counties within 24 hours. Sometimes a day at work can be very rewarding indeed.