Scott: Since we moved to Scilly in 2018, I often get phone calls from my wife, Samaya, describing a bird that she's watching but doesn't recognise. She wouldn't label herself as a birder, but she knows her stuff and has incredibly sharp eyes! More often than not, her queries result in the discovery of a commoner bird in an out-of-context situation, but she has found, and identified, some nice scarcities and migrants.

Also, somewhat agonisingly, during a particularly productive spell of transatlantic westerlies in October 2019, she gave a gripping account of an exhausted cuckoo species arriving off the sea on Peninnis Head and crashing into nearby gorse, and quite innocently gave a convincing description of a Yellow-billed Cuckoo. The bird was never seen again and the record was lost, but it seemed only a matter of time before she landed something big.

The week commencing on 21 November 2022 began with a continuing theme of strong westerlies that had been prevalent in south-west England for most of the autumn. However, two weather systems in particular caught my eye: the first making landfall late on the Tuesday night, and the second in the early hours of Thursday morning.

Both originating from the eastern seaboard of North America, they tracked across the Atlantic in less than 48 hours, with the 'apex' of the associated warm fronts forecast to go straight through Scilly. It seemed the 'perfect storm' for an arrival of Nearctic birds, but this late in the season what could we realistically expect? I'd messaged a few friends on the Tuesday evening, speculating over potential late vagrants and, being one of the latest autumn migrant warblers in North America, Myrtle Warbler was briefly mooted.

Thursday morning [24 November] arrived, and Samaya had planned to take our three children rockpooling while I was at work. Given that there was still a strong south-westerly blowing, I recommended that they didn't work our usual patch in Porthcressa Bay, but instead went to Old Town Bay, on the leeward side of Peninnis Head. At 10.30 am, Samaya phoned me, sounding slightly panicked, to say that her and the kids were watching a bird, by the steps to Old Town Beach, that she didn't recognise. 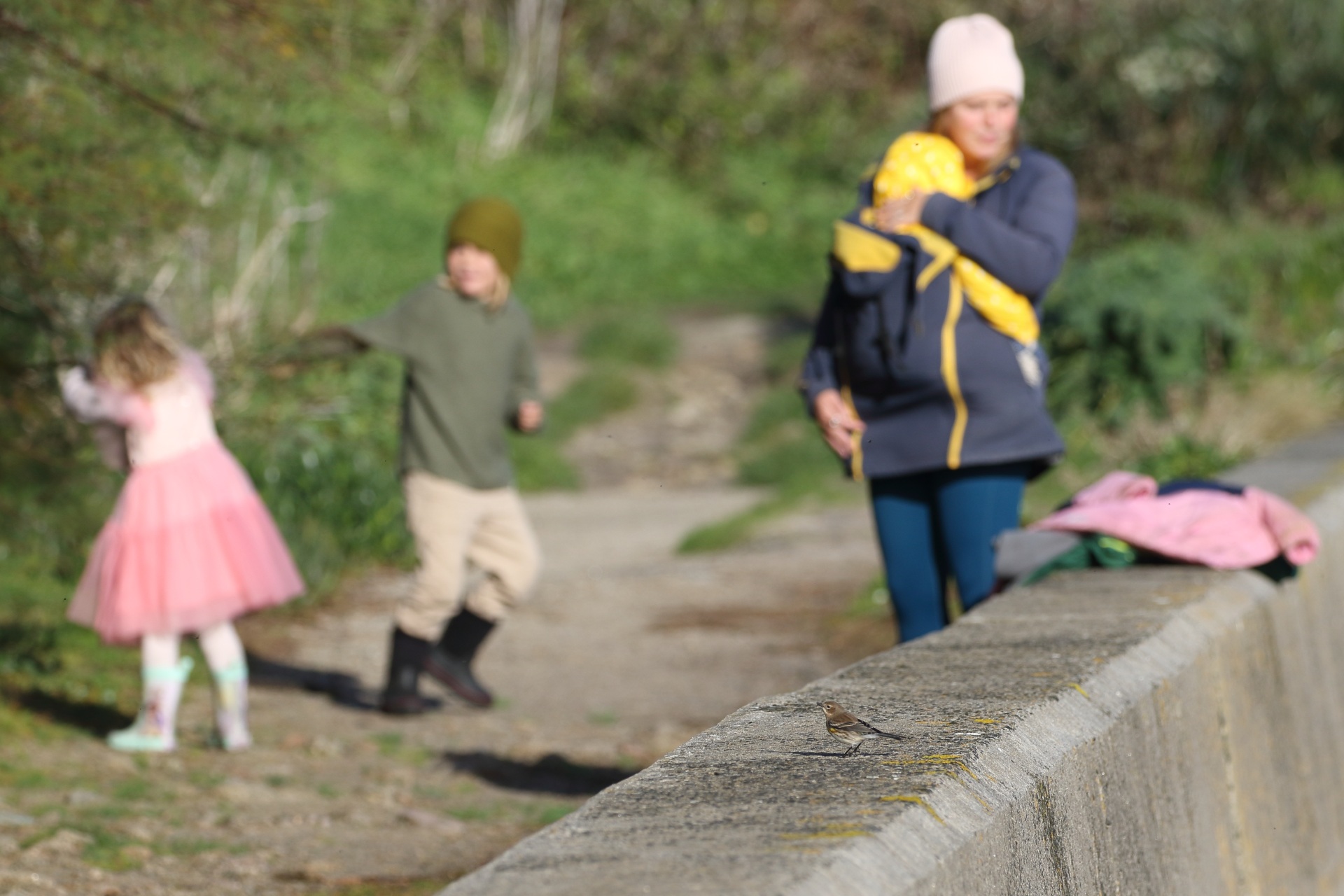 Samaya, Orkney, Orli and Dusky with their star find in the foreground (Scott Reid).

Samaya: All three children were ready for a morning of rockpooling. We'd been waiting for these low tides and were excited to get out into Old Town Bay to see what we could find. Heading down the path towards the beach, I noticed a bird sat in a Pittosporum bush. The main reason I noticed it was because it wasn't flying off as we approached, as most things do, given the usual noise levels of three small people!

It stayed perched a little longer and then started flycatching. I told the children to stop walking and to keep quiet so I could get a closer look. I noticed the two white tail patches and lighter markings around the eye, and I knew it was a bird I hadn't seen before. I took out my phone to try and get a photo of it, but afterwards realised I had taken a photo of the wrong tree!

I phoned Scott and told him I was watching a bird that I didn't recognise and described it to him. I fully assumed that he would give me an explanation and that we'd carry on our walk to the beach, but instead he told me not to move, to keep an eye on it, and that he would be there shortly. The moment I put the phone down the bird flew! Luckily, it had just moved further down into a different Pittosporum. We started to walk quietly and slowly, following it, when I lost it again.

It flew higher and further round the corner this time. Orkney, our seven-year-old, walked further along the path and shouted to me "Mum! The bird is here!" and sure enough there it was in some overhanging tamarisks along the boundary wall of the churchyard. It kept flycatching and then landing on the sea wall. This time I managed to get a short video of it, but the sun was behind it, so the views weren't the best.

Scott soon turned up and asked us where it was, but at this point we hadn't seen it for a few minutes. I quickly explained where it had been and what it was doing and showed him the video. The video got him slightly more animated, and he walked off in the direction where we last saw it. I was anxious to get out rockpooling as it was getting close to the low tide, so we scrambled down the rocks and headed across the beach. 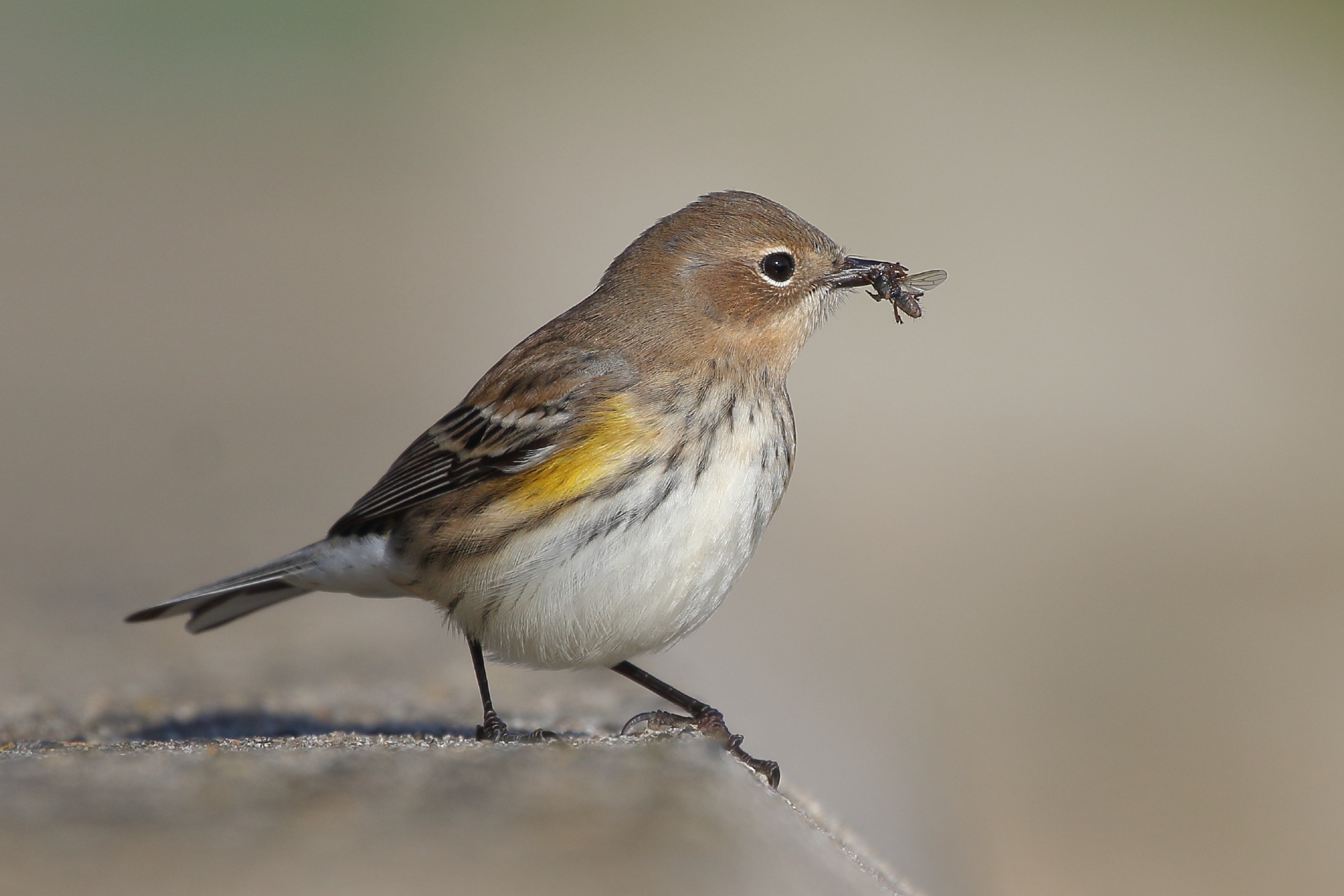 Scott: The light was terrible looking south along the edge of the churchyard bushes, so I decided to walk down the path to view back along the sea wall with the sun behind me and wait for a bird fitting Samaya's description to appear. Just as I was reaching my desired location, I heard two unfamiliar chip calls.

Still looking against the glaring sunlight, I noticed a Black Redstart on the granite wall to my right, and there was another smaller bird next to it. I lifted my binoculars and, to my absolute disbelief, I was looking front on at a bright, first-winter Myrtle Warbler!

I watched it in amazement for about 15 seconds, as bold as could be, out in the open, chasing flies. I took a couple of photos before running to the edge sea wall where Samaya was still in earshot. In a whispered shout, I called "You've found a Myrtle Warbler!" across the bay to Samaya. "Is that good?" came the reply.

I fumbled for my phone and, despite patchy signal, managed to start getting news out to other local birders. Now, in my past experience of rare birds, this is usually the part where the bird has gone missing and there's a nervy wait for it to reappear, but not this bird. It was still there, bouncing between the wall and a nearby tamarisk, calling frequently to continuously reassure me of its presence while I responded to messages and phone calls.

Happy that everyone knew the score, I put my phone away and sat on the sea wall to enjoy the bird while I was still alone. I'd only been sat for a minute or so when the bird left its tamarisk in pursuit of a fly, flew directly at me, banked at the last moment, and landed on the wall, no more than two metres away from me. Astounded, I took a few frame-filling photos, had a look at it through my binoculars, then just sat back and watched as it pottered around with a local European Robin. 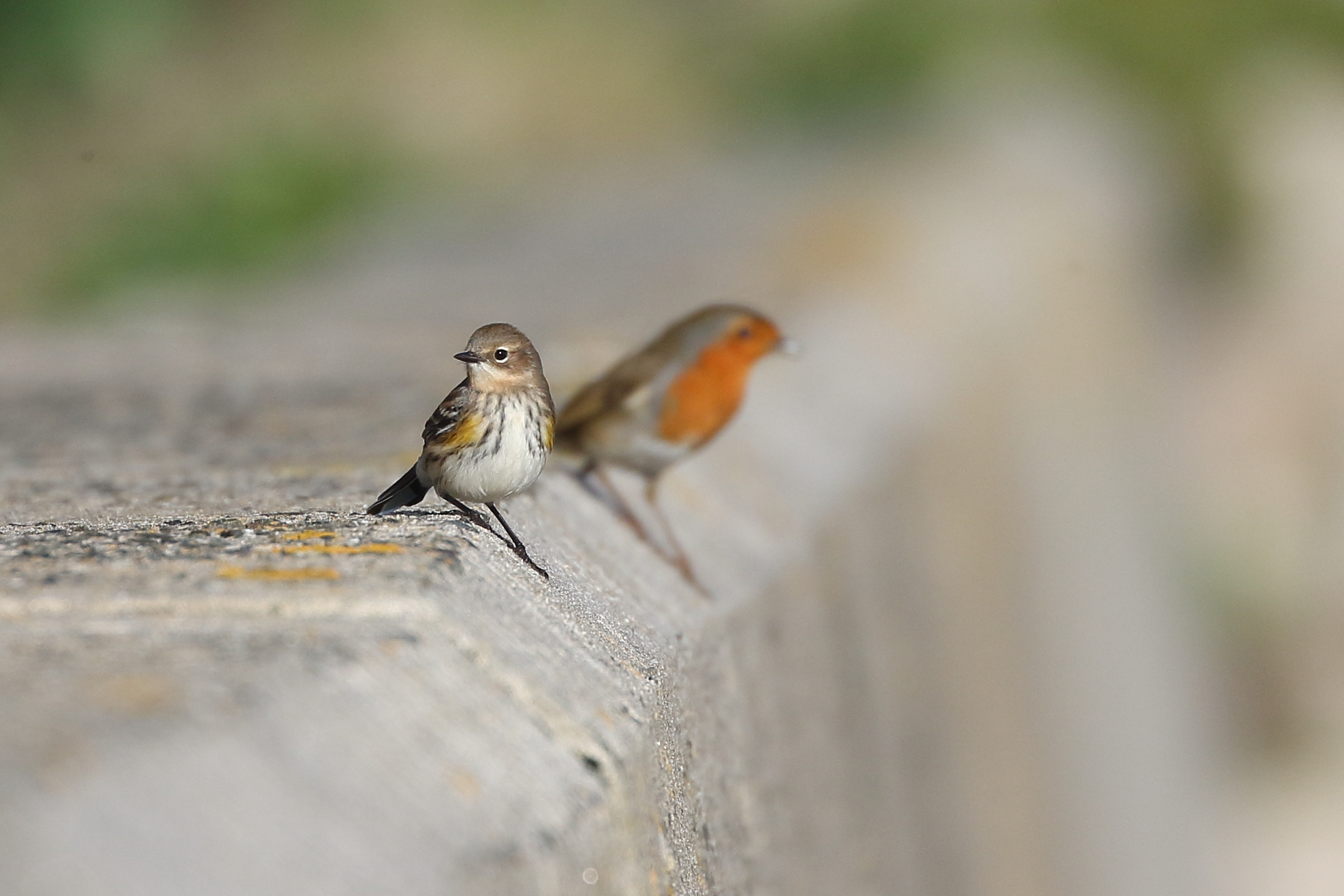 The bird was often seen feeding alongside the local European Robins and Black Redstarts (Scott Reid).

It was so unbelievably close, little flecks of blue-grey were emerging on its lesser coverts and ear coverts, yellow breast flanks gleamed like headlights against off-white underparts and delicate black streaking, and its yellow rump and white outer-tail feathers delivered a colourful flash of unfamiliarity each time it flicked after a prey item. With the bird firmly in earshot, I excitedly whispered to it: "You little beauty!"

People soon began to arrive and the bird continued to perform in spectacular fashion, gorging on an abundance of flies, completely unperturbed by the assembling crowd.

Congratulations were offered in my direction, but I made it quite clear that it was actually Samaya and the kids, who were still out rockpooling, that had seen the bird first!

Samaya: While the excitement unfolded up on the path, we'd continued rockpooling and I casually discussed with the children how "I think I'd found daddy a pretty good bird". We'd missed the prime rockpooling time and didn't find anything noteworthy. We headed back up the beach and I could see birders already gathered watching the bird, which was still flycatching and landing on the sea wall.

I shouted to Scott and asked if we were OK to climb up the steps as I didn't want to flush it. Our three-year-old, Orli, made it up first and went to sit with Scott who put his arm around her and explained to her what the bird was, then Orkney, myself and baby Dusky followed.

As I reached the top I was met with congratulations, hugs, and handshakes from lots of smiling faces. I felt a huge sense of happiness, that finally, after all the phone calls to Scott over the years, I had found something mega! I had always joked with him that one day I was going to find him a rare bird, and I had actually done it. We all stood together, taking it in turns to look through the binoculars, but it was so close that the kids were easily watching it without.

The excitement of it all sent baby Dusky to sleep, so I sat down on the sea wall and took it all in. At this point nearly every local birder was with there, although there was an anxious wait for a couple of them to arrive, who had to hold off until their lunch break. It's certainly an experience I'll remember forever. Seeing so much excitement and joy from all these people I know and seeing my husband so proud and happy was just the best feeling. A morning of rockpooling had become a memorable family adventure. 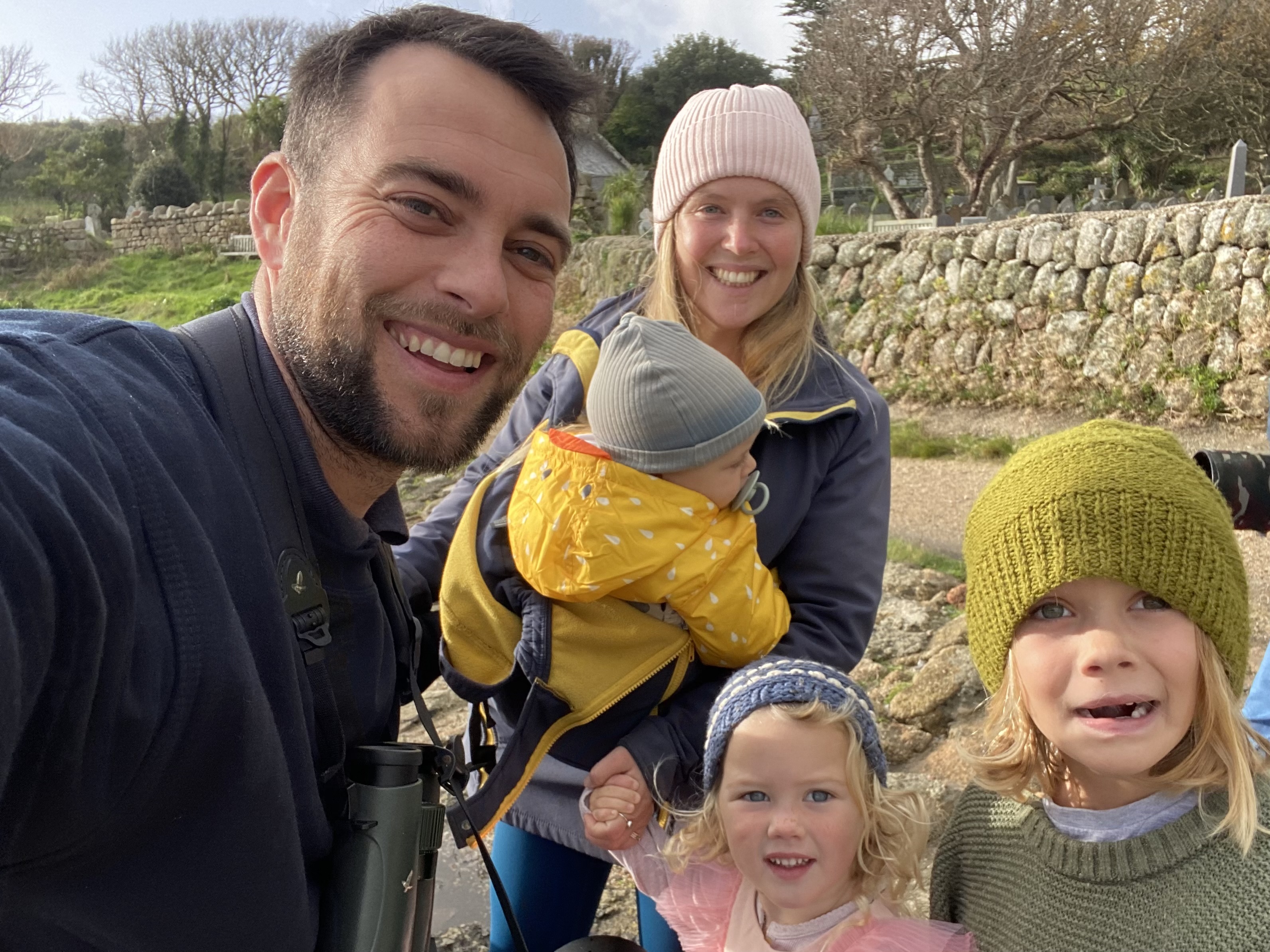 Scott: This is the sixth record of Myrtle Warbler for Scilly, but the first in 27 years, and was therefore a Scilly tick for all but the most seasoned of local birders, and a British tick for a fair few. It stayed with us for five wonderful days, in which time I spent roughly 10 hours with it! Sometimes it was flycatching from the tops of the tallest elms in the churchyard, sometimes charging around the sea wall with the chats, and sometimes skulking beneath the shadowy overhangs on the upper extremities of the beach. Its varied foraging methods were a joy to witness.

We were even treated to flashes of its stunning yellow crown-stripe, often after downpours when its head feathers were soggy, confirming that it was indeed a first-winter male. The bird fed incredibly well during its stay, and evidently replenished its energy resources sufficiently that as soon as a suitable weather window emerged in the form of a clear, calm Monday night, it departed.

I felt an overwhelming sense of sadness on the Tuesday afternoon, standing on the pebbles staring at the seaweed pile where it had fed so charismatically the day before, at the realisation it had gone. It was possibly the most I'd ever enjoyed a bird, certainly more so than anything I've found on my own. This was a family find, a team find, a mega-American-warbler-on-Scilly find and shared with the four people I love most! Birding doesn't get any better than that, does it?

The lion's share of the credit, however, goes to Samaya, of course. Without her sharp eyes, quick thinking, and her undeniable birding abilities which she often doesn’t even realise she has, I would never have had the pleasure of identifying a Myrtle Warbler on Scilly.

In fact, judging from experience, something tells me this won't be the last Scilly rare bird finder's account that we'll be writing together!

Written by: Samaya and Scott Reid