Since moving to our small New Forest cottage about three years ago, my girlfriend and I have set about transforming the garden into a haven for wildlife. When we arrived it was a sterile patch of lawn flanked by a strip of private land that was an overgrown bramble patch. Our first task was to purchase the strip of land, clear the vegetation, and create a large pond. Within a year the pond was host to Common Frogs, Palmate Newts and a good selection of invertebrates. The shallow pebble 'beach' is especially popular with visiting birds that use it for drinking and bathing. We have also dug several borders and filled them with a range of flowering shrubs and plants, and a concerted tree-planting campaign now sees us host 16 species of tree. Many of these have been selected as moth food plants, e.g. Poplar, Alder and Sallow. The garden moth trap attracts about 300 macro moth species a year, with the highlight being annual records of Scarce Merveille du Jour and Clifden Nonpareil (which is probably established somewhere nearby). Breeding birds include Stock Dove, Blackbird, Dunnock, Robin and Great Tit, the latter quickly occupying a nest box we erected.

This is all very nice, but having previously lived on or near the coast I was not particularly happy about moving to an inland site where migrants are at a premium — although records of wandering Honey Buzzard and Firecrest from the adjacent forest have provided some compensation. To make up for the lack of migrants I've invested a lot of time and money in bird-feeding, and at peak times I get through one giant and two medium-sized feeders full of sunflower seeds, one medium-sized peanut feeder, half-a-dozen fat balls and a generous scatter of high-energy bird seed every day or two. This wholesale feeding regime is probably costing me several hundred pounds a year, but does attract impressive numbers of common woodland birds and supports a healthy population of Bank Voles and Wood Mice!

A more unexpected visitor to the feeding station arrived on Saturday 20th March 2010. I was settling down in front of the laptop (for a long session of SeaWatch SW data entry!), when my girlfriend mentioned that she could see a sparrow feeding on birdseed at the bottom of the garden. As sparrows are quite scarce in our rural location, I assumed it would be a Dunnock, but a quick glance out of the conservatory revealed it was a bunting. My first thought was Reed Bunting (a potential garden tick), but it looked a bit contrasting and compact for that species. I dashed to get my Leicas to get a better look at the bird, and soon realised it was a first for Hampshire — a stunning Rustic Bunting! 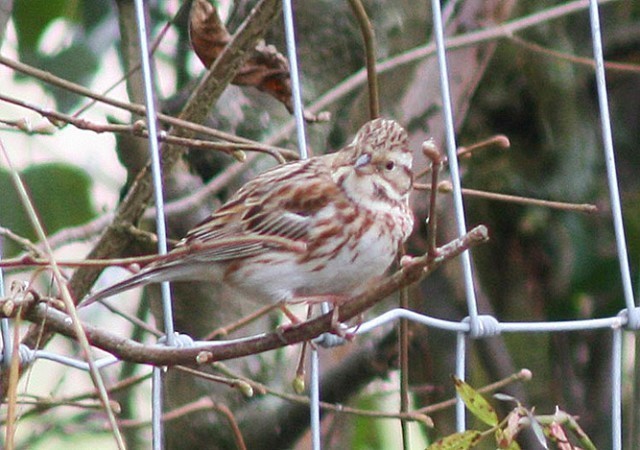 The bird showed intermittently at the feeding station but frequently disappeared into the adjacent hedge, presumably seeking shelter from the heavy showers. However, it looked fairly settled, and I continued to watch it on and off for several hours from within the conservatory. The plumage features indicated it was probably a female moulting into summer plumage. I managed to get a few digiscoped record shots, but the quality was poor in the murky conditions.

To avoid any 'single observer' issues, I invited a few mates over who are all keen local birders. We obviously discussed the thorny issue of news release, but there was agreement that the location was not suitable for a twitch, even if I had the time to spend all weekend ferrying people in and out of the house (our garden is bordered by private land and a railway, can only be reached via a private driveway, and can only be easily viewed from within the conservatory). 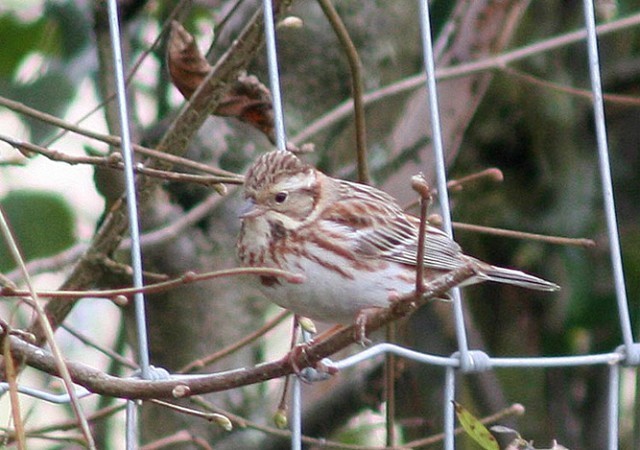 The night of 20th March was cloudy and damp, and it was therefore no surprise that the bird was still present the next morning. It remained around the feeding station all day despite us both working in the garden for long periods. I managed to get some better shots with the DSLR and a couple of video clips. There was a heart-stopping moment when a marauding female Sparrowhawk descended upon the feeding station, but luckily it left empty-handed. The bunting mostly fed on ground seed but was seen to dig a worm out of the manure heap on one occasion. A clear night on 21st March presumably saw the bird continue its northwards migration, as it was not present the next morning.

Although this is a long overdue first for Hampshire, there is a record from Stanpit Marsh in nearby southeast Dorset from 1993, which coincidentally was also found on 20th March. The date and geographical location are obviously unusual, but the habitat in the area of garden it frequented is not atypical for the species, with a small stream flanked by hazel, birch and sallow and bordered by a wire deer fence. I have previously found Rustic Bunting on Shetland in surprisingly similar circumstances (a bridge across a small burn baited with ground seed and bordered by a wire sheep fence). 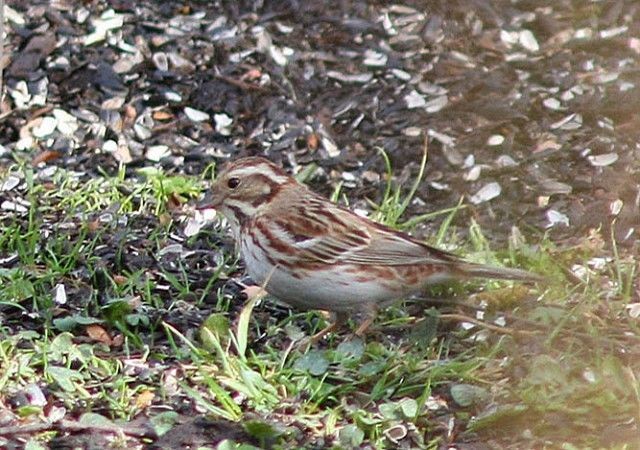 Hopefully, this brief account emphasises the point that anything can turn up anywhere, especially as we move into the spring migration season. More importantly, without the creation of suitable habitat and a well-stocked feeding station, the bird would probably never have arrived in our garden. So even if you live at an inland site away from a migration hotspot, a bit of tree planting and bird feeding may eventually yield a rich reward!