I am not the most observant of people, however I did notice the weather forecast on the evening of Friday 2 October. To say it looked good for eastern migrants on the Durham coast was an understatement! The next day, I chose to start birding near the Spion Kop Cemetery just north of Hartlepool, which I thought was probably as good as anywhere in the heavy rain that was forecast. After that, I would work my way up the coast.

I haven't found a Durham rarity for a few years and I haven't comes across a British rarity since the year Radde's Warbler came off the BBRC list, so despite the weather map, I wasn't overly optimistic. As I drove to Hartlepool, I calculated my likelihood of finding something good: if one out of 10 birds on the coast were migrants and one in 1000 of those were rare and one in 100 of those were likely to be visible in the pouring rain, my chances were one in a million; great!

I parked at the southern end of the line of trees and bushes and had enjoyed two Bramblings and good numbers of thrushes by the time I reached the northern end. Nevertheless, even the pessimist in me had expected a little more. On the other hand, a European Robin had allowed me to pick it up and place it in a safer location, so there were some tired migrants around; and the rain had held off so far.

As I 'pished' towards the last bush at the northern end, a shrike popped out and landed in front of me. With the naked eye I thought it was about the size of a Red-backed Shrike, but it was quite pale. Through the bins I could see it clearly wasn't a Red-backed; rather, the speckled crown and overall mixture of greyish, white and black plumage, together with a prominent white mark on the primaries, made me think of Woodchat Shrike. A few seconds later the bird disappeared round the back of the bush. Having never found the species in the UK, I was very chuffed but I had a few fleeting worries: "Woodchats can be that pale, can't they?"; "I didn't see a pale rump"; "The tail was quite long"; "I wasn't expecting to find one in October". Some of these would be major red flags for a properly switched-on birder but at that point, I have to be honest, Masked Shrike didn't cross my mind. 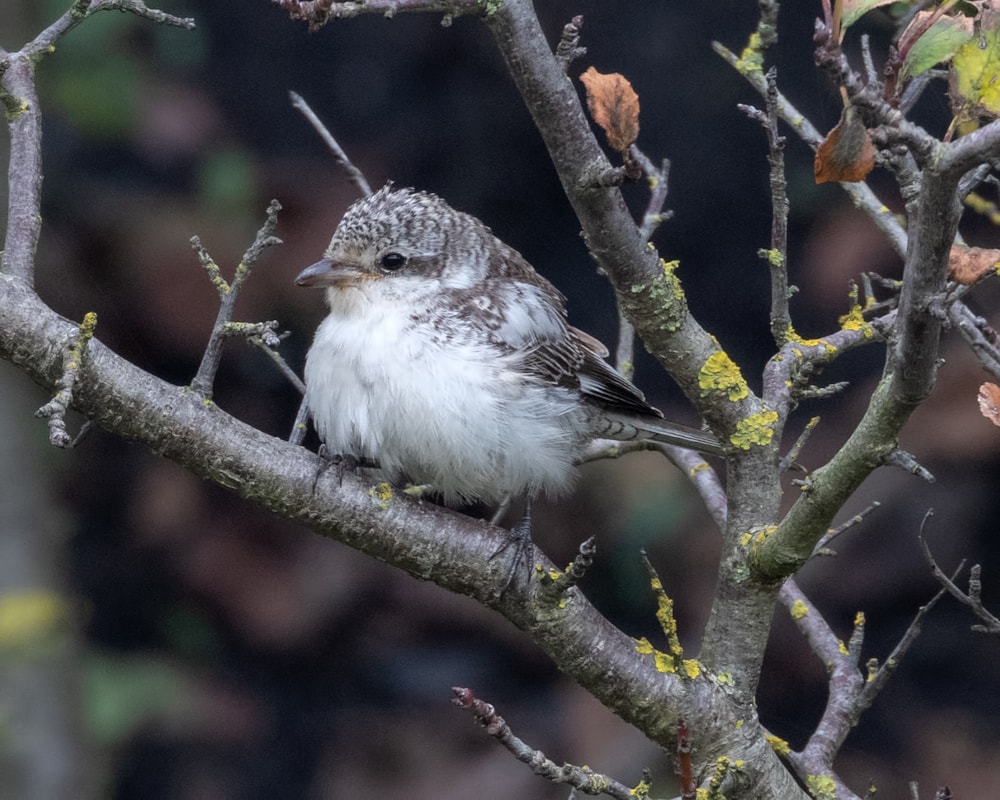 After waiting for a few minutes to see if it would reappear, I decided to put news out. I don't use bird news services (sorry BirdGuides!) so I put my bird news on Twitter. At 9.04 am I tweeted that I had found a Woodchat Shrike and it wasn't long before some birders arrived from the Hartlepool area. Soon after, with the naked eye, I saw a long-tailed, grey bird with white wing-bars fly away from the original location. It did look small – was that another red flag? Unfortunately, the shrike disappeared for a frustratingly long time until it was seen briefly in flight twice by Geoff Iceton. When Tom Francis told me that the shrike had been relocated, I could have hugged someone, but since that is strictly forbidden under local lockdown rules, I just said, "Is it definitely a Woodchat?". I think I had an inkling I had made a mistake.

Ten minutes later a very nice lady found the bird, perched on the lower branches of a conifer, partially obscured by surrounding vegetation; it would stay there or nearby for the rest of the morning. We weren't close and the view through binoculars was not brilliant, but a number of birders and photographers kindly shared their initial pictures on the back of their cameras (while maintaining social distancing, of course).

Initially the shrike perched facing directly towards us making side views impossible. There were some initial comments that the crown was quite warmly brown and so Woodchat was probably correct, but then better pictures showed that this was not the case. The crown was strongly mottled/barred but it appeared essentially grey and white; the dark mask was fairly diffuse and there was a white 'half-collar' leading from the pale underparts to behind the ear coverts; the tail seemed long and the bill looked thin for a shrike.

It occurred to me that a great friend of mine, Ken Shaw, was involved in identifying Britain's first Masked Shrike – which was nice – so I called him up. "What should I be looking for?" was my frantic question. I think I also said I felt like I was about to have a heart attack – demonstrating extreme calmness under pressure in the field as usual. The quick answer was: small bird, long tail, fine bill and lack of a pale rump, which certainly had a familiar ring to it.

As we spoke, the shrike changed position and perched with its back in view. I hung up, hopefully not too rudely, because people were now getting some very helpful photographs. The bill looked good – slender and with only a slight hook to the tip; the tail was long; it had a striking white 'shoulder'-patch between the scapulars and greater coverts; and there was a whacking great white patch at the base of the primaries. The shrike had been perched in the same place for 15 or so minutes (although not always visible) and I was beginning to think we should put it out as a Masked Shrike.

I tested the mood and there was some understandable hesitancy. I was fairly confident the bird had a dark rump but this was a feature that didn't show clearly on any of the pictures I had seen so far. So, Tom's confident and loud assertion that it did indeed have a dark rump was perfectly timed. Despite momentarily losing the ability to use the Twitter app, I managed to Tweet at 11.20 am, "Correction: presumed Masked Shrike at Jewish Cemetery bushes", and this was picked up quickly by the news services. 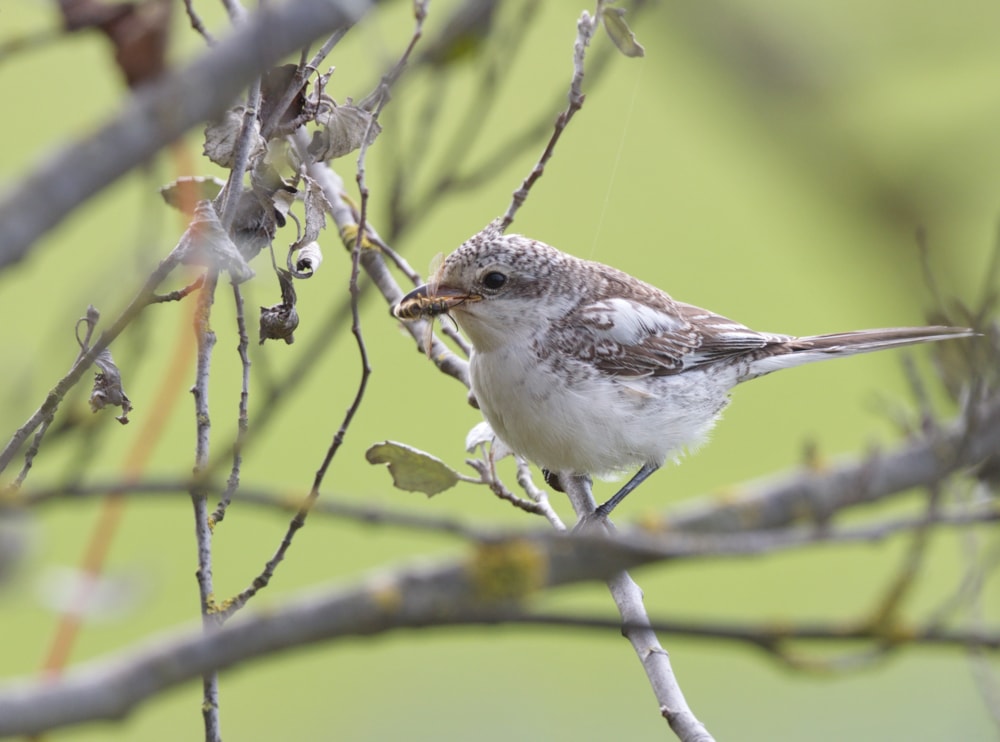 The Masked Shrike didn't move much in the next 40 minutes. It would sit still for long periods, sometimes in view at the base of the conifer and sometimes obscured by the surrounding vegetation. It occasionally moved around the lower bushes behind the conifer tree, overlooking the nearby horse paddock and rugby pitch, however this was a tricky location to observe. Big thanks are due to Hartlepool Rovers Rugby Club who apparently allowed birders to view from their premises the next day – fantastic!

I never got a better view of this beautiful creature than the first few seconds when it jumped out and discombobulated me, but I have been enjoying the wonderful photographs and videos of it ever since. I would like to thank the birders and photographers who helped me reach the correct identification on the day, and anyone who has shared their images of it since.