It was proving a rather uneventful 9 November when Tommy Ross posted a message on the Fife Bird News chat WhatsApp mid-evening, questioning the identity of a photo on the Fife Bird Club (FBC) website; "That is an interesting looking Bar-tailed Godwit that Keith Simpson has put up on Fife Bird Club site. Very black patch on the under wing, similar to Hudsonian. Does anyone have a view on the photo?" What followed was a panicked search for my FBC password and disbelief as the now famous flight shot of Hudsonian Godwit downloaded to my laptop.

A few WhatsApp exchanges and a few phone calls with birders and plans were set. No-one knew where the photo was taken but the Eden Centre seemed the most likely spot. Later on in the evening Sam Taylor pointed out that the picture was taken on 3 November and uploaded on the 7th. Would the bird still be present the next day? Possibly – if the Black-tailed Godwit flock is still around then why not?

I started the 3 November with a visit to Morton Lochs to photograph Fieldfares, Redwings, Jays and Red Squirrels. It wasn't long until the sun came out and the light started improving, so I decided to pop down to Guardbridge on the Eden Estuary to see if the resident Common Kingfisher would oblige with a fly pass or sit on its usual perch.

When I arrived the light was good but the only birds flying past were a couple of Great Cormorants. A short while later I noticed a small group of Common Redshanks on the opposite side of the river, which took off towards me before turning into the light and landing. I managed to take a couple of pictures of this group, which was shortly joined by a few more Redshank flocks. When I got home I processed the pictures from Morton Lochs and posted then on my Flickr site, with a short cursory glance at my Redshank pictures, which I'd decided I would process later instead.

Starting to  process my Redshank pictures on 7 November, I saw what I thought was a Bar-tailed Godwit in the centre of one of the Redshank flocks. I cropped the picture and posted it both onto my Flickr account and the FBC website with the label 'Bar-tailed Godwit & Redshanks'. On 9 November I noticed some discussion on WhatsApp suggesting that it was a Hudsonian. Seeing these messages, I went and checked if I had another picture to post, which I found and posted on the Club's website. This picture had an out-of-focus Bar-tailed Godwit above the Hudsonian, which I think helped with the identification.

I'm a keen amateur photographer first and birder second, being able to practice my hobby more after an early retirement four years ago – so I'm still learning when it comes to identifying birds correctly. 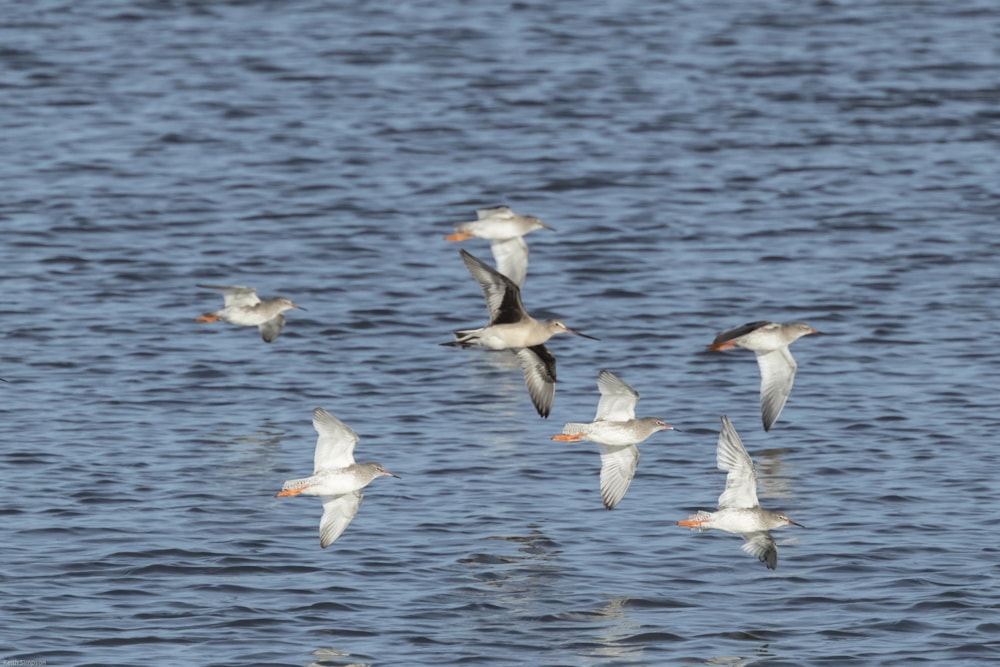 Keith Simpson photographed what he thought was a Bar-tailed Godwit with a flock of Common Redshanks, prompting a scramble to relocate it when it was reidentified as a Hudsonian Godwit later in the week (Keith Simpson).

Next morning I arrived at the Eden Centre at 07:30, about 15 minutes before sunrise, and met up with John Bell who had been scanning the waders gathering on the rising tide since first light. Over the next hour or so we were joined by Ken Shaw, John Nadin, Dick Byrne and Chris McGuigan. Social distancing meant John and I were positioned to the south side of the closed hide and the others to north.

The Eden is a constrained pocket estuary bordered by Leuchars RAF base, A-roads and golf courses, but on the morning of 10 November it was atmospheric with mist and the sound of thousands of Pink-footed Geese, small parties of Whooper Swans, chittering waders and the thin calls of Common Kingfishers.

Although the light was poor under heavy dull grey skies, the visibility was about 500m. Not bad considering the previous day, haar (a type of cold sea fog) had reduced the view to less than 50 metres at times. Among the Pink-footed Geese and waders gathered around the edge of mud flat six Black-tailed Godwits were initially visible preening and feeding on the exposed mud.

As the tide rose more Black-tailed Godwits gathered in a group opposite the hide. It wasn't a particularly high tide that morning so they weren't driven off by the rising waters. Eventually a group of 42 godwits settled down; roosting, preening and a few feeding.

At 09:10 large numbers of Pink-feet noisily departed and this spooked the godwit flock causing them to fly in a tight circle, completing the loop a couple of times. I noticed a godwit in the flock with the black underwing coverts we were all looking for. On its second pass I could see the white on the upperwing was reduced to a narrow short wingbar. John Bell got on to the bird just before the flock landed back on the shore and settled back down to roost. 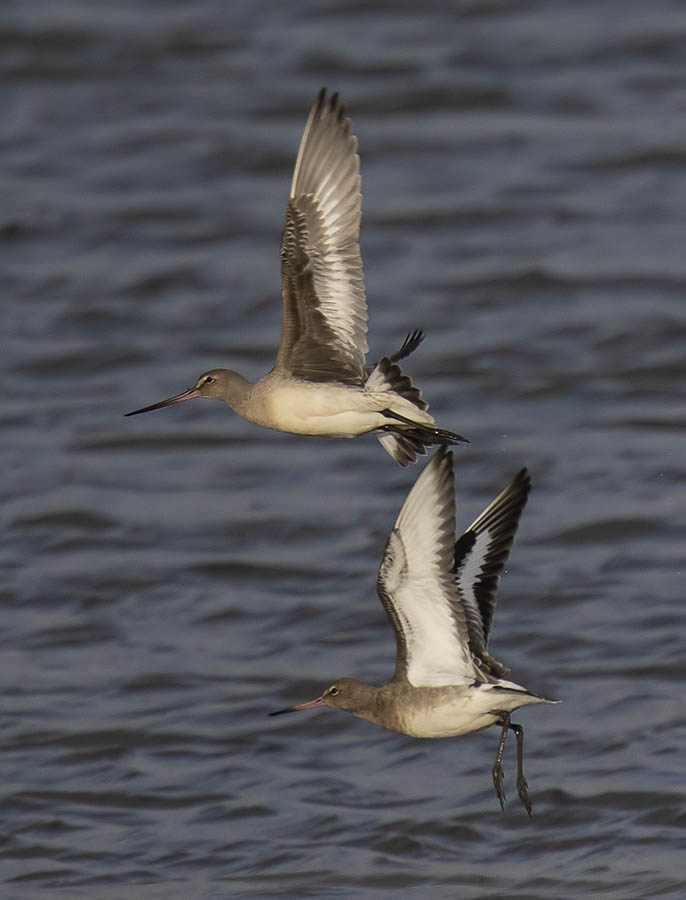 Jet black underwing coverts are the most reliable feature to separate a Hudsonian Godwit (above) from both a Black-tailed Godwit (below) and Bar-tailed Godwit (John Anderson).

Unbelievably – to me at the time – no-one else had picked up the bird. The flock was thoroughly grilled and one of the birds was singled out as being very slightly different. The same bird picked out independently by the two groups of birders either side of the hide.

It proved difficult to discern, as most of the godwits were facing away from us with their bills tucked up. The differences were subtle compared to Black-tailed Godwits, but this one was very slightly smaller, owing to its slightly shorter upper leg length, which was best noted when stood on even ground. The upperparts were a little browner overall, probably due to the contrasting dark centres to the mantle feathers, but the dull light hid this from us at the time. On the few brief occasions, it looked up or ran short distances the supercilium was seen to be very white and broad before the eye. The bill a little upcurved, and the breast and belly warm buff. In short, it looked like a Black-tailed at roost and a Bar-tailed Godwit when walking about.

As time ticks on, doubts set in and churn in the mind. Did I really see the black underwing? The reduced wing bar? Why did no-one else see it? We (and especially I) needed to see it in flight again to lay those fears to rest. Although I'm an active birder, I'm a relative newcomer to Fife and I was well aware that claiming such a rare bird had just made two or three passes in front of a line-up of very experienced and knowledgeable Fife birders without them picking it up must have at the very least been frustrating for those present.

At 10:20 after a painfully long nail-biting wait, the flock took off and circled higher and higher. This time all observers saw the diagnostic black underwing coverts. The flock flew to Coble Shore further east down the estuary where it was re-found by Rob Armstrong at 12:00.

It was all celebrated rather pitifully. An elbow bump with John Bell and some socially distanced chat with all. 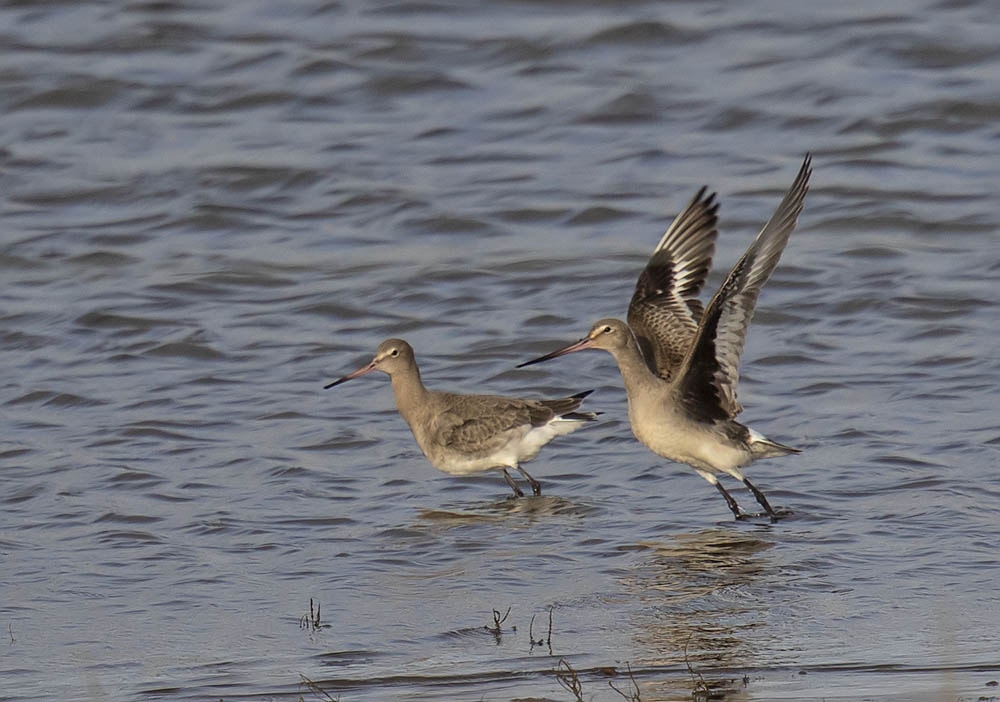 Fife's Hudsonian Godwit (right), pictured alongside a Black-tailed Godwit, is a second for Scotland, following a one-day bird at Slains Pools, Aberdeenshire, in September 1988 (John Anderson).