I decided to head down to the Ballyconneely area late in the day on 22 July to have a quick look around. As I was driving along the coastal road from Ballyconneely towards Roundstone village I saw that the tide was out as I was passing at Inishdawros. This is an area of exposed sand interspersed with seaweed-covered rocky outcrops, Inishdawros lying about 250 metres off the mainland.

Like many other wader sites in Connemara, it generally holds very low numbers of waders, even during the height of autumn and winter. I had my first notable bird here only last September in the form of a Curlew Sandpiper. The Connemara area of Galway, like many parts of Ireland, has received scant attention until relatively recently, but in the last ten years we've managed to pick up 15 Dotterel, 10 American Golden Plovers, White-rumped Sandpiper, at least 20 Pectoral Sandpipers, 5 Buff-breasted Sandpipers, Long-billed Dowitcher and Lesser Yellowlegs out here. The majority of the Nearctic vagrants really only appear from the second week of September onwards and most of these are juveniles. We've only ever had one juvenile Pectoral Sandpiper and a second-calendar-year American Golden Plover in August, so you can imagine I certainly wasn't expecting much on this early date. 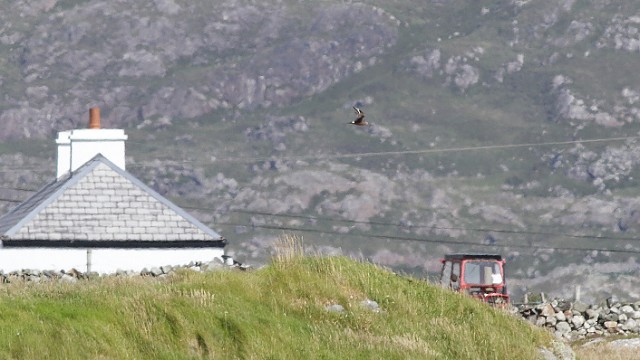 I wanted to check through the small waders, the Sanderling in particular. I occasionally come across colour-ringed birds, some of which have returned for several years now. There were around 30 Ringed Plover and 12 Dunlin in their usual spot but there was also an adult Little Tern with two flying juveniles. I had driven out across the strand but decided to park up back on the mainland side and come back to try to take a few more shots — I didn't want to get cut off with the incoming tide, and at least I would be able to wade back in if the worst came to the worst.

As I returned to the area the terns quickly left, so I decided to check a spot in which they had been feeding a few minutes beforehand. Suddenly a large wader flew from my left to right and dropped behind a large rock. As it passed within 30 metres of me it banked twice as it appeared to land. I didn't have time to raise my binoculars but even with the naked eye I could see that it had entirely black underwing coverts, rusty underparts and a clean white rump offset by a black tail. It couldn't be anything else but a Hudsonian Godwit — bloody hell! My heart rate instantly skyrocketed. I just prayed that it would stay still for a record shot. As I peeked my head over the rock a few Redshank and Greenshank exploded off, calling as they went. Not what I needed! Thankfully the godwit was still there, standing on the water's edge. It was almost reminiscent of a big summer-plumaged dowitcher species. 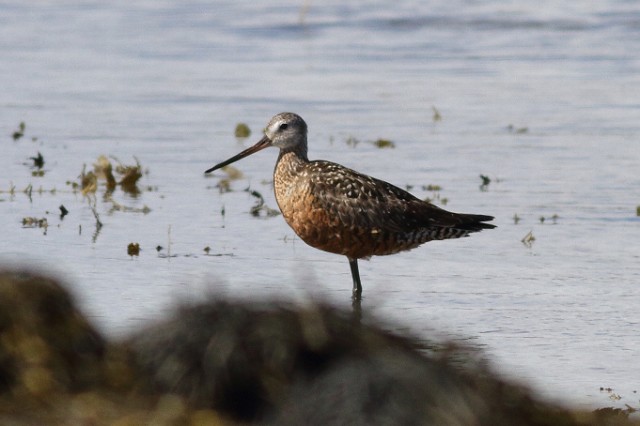 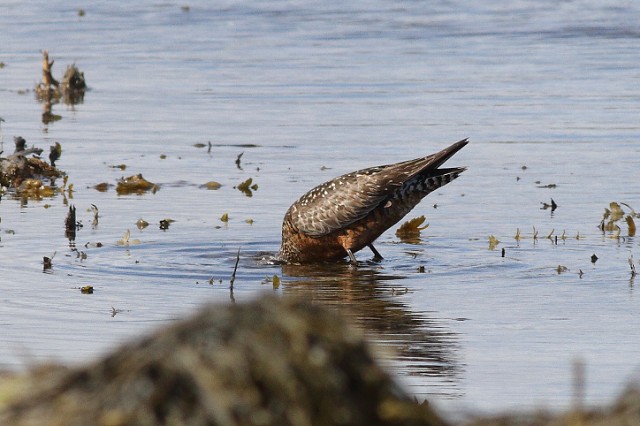 I watched and photographed the bird for about 20 minutes before it got up and flew in a big arc around the strand before appearing to land among more seaweed-covered rocks. However, there was no sign of it for 30 minutes so I went back to the original spot. Much to my relief it was back again! I ran back to the van to get my tripod and scope, and the bird was still in the same spot on my return. After only 10 minutes it got up again and disappeared again into the same area as before. The tide was now rapidly rising and I had to head back to the mainland side of the strand before being completely cut off. Around the same time a family with a dog in tow walked through the area I'd last seen it land in, and I never saw the bird after this. Having initially picked it up at about 16:25, I last saw it at 17:25. The nearest birders both live in Galway city, which on a good day is an hour's drive away but, with rush hour and roadworks, it was nearer to 90 minutes before they managed to get out, which was unfortunately too late. A few others from even further afield from Dublin, Cork and Kerry inevitably missed it also, as did the fifteen or so the following day. 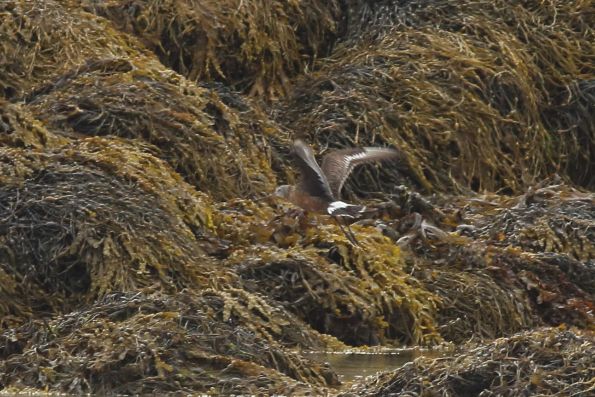 This will be the first record of this species for Ireland if accepted by the Irish Rare Birds Committee. It would appear that this is a different individual from the one that was seen in Somerset this April/May. While that bird was probably a female, the Galway bird is probably a male. Males are supposed to leave the breeding grounds earlier than females, from late June compared to from mid-July respectively. Compared to the UK bird the Irish bird had fewer and weaker black bars on a brighter rusty belly and flanks but with bolder black barring on the undertail coverts, less white tips to the under primary coverts, a weaker supercilium behind the eye, a whiter head contrasting with more heavy streaking on the neck and, although it was hard to judge size accurately, it didn't seem to be Black-tailed Godwit sized but closer to Bar-tailed Godwit. It's been some time since I've managed to find myself a lifer in Ireland but this was a great one to pick up, considering how scarce they are in North America: the total population is estimated at only 70,000 birds. I must say the whole thing was a bit surreal, but it just goes to show anything can turn anywhere at any time. 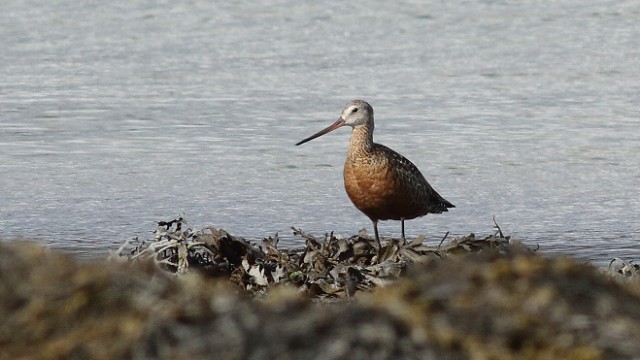 The weaker black bars on a richer rust-coloured belly, whiter head and shorter bill all showed the Co Galway bird to be a different individual to that seen in Somerset in the spring (Photo: Dermot Breen)