At lunchtime at the Brora beach car park, the tide was high and a quick scan from my car of the rough seas revealed a few Long-tailed Duck and Common Scoter. I then saw what I initially thought was a female Velvet Scoter, but this bird looked far too small in comparison with the Common Scoter present offshore. There was a large swell on the sea, but I soon had the bird in the scope. It then flew about 100 m south and became difficult to see because of the bright sunlit water — however, in flight it intriguingly showed no white in the wings.

I took my scope and walked very quickly south along the beach in order to get the light behind me. I got it in focus once more for a brief moment before it was spooked by an Otter, and flew north for approximately 600 m. This small duck — all dark apart from a white spot on the ear coverts — now had me convinced it was a Harlequin Duck. The only problem was that, because of the light, I could not see the pale greyish patches above and below the eye. I sent a text to Bob Swann, hoping that he would come over, but he was on nearby Lewis at the time. I put the news out as soon as I returned home. The next day, I searched the shore to the north of the river mouth but could not find it again. 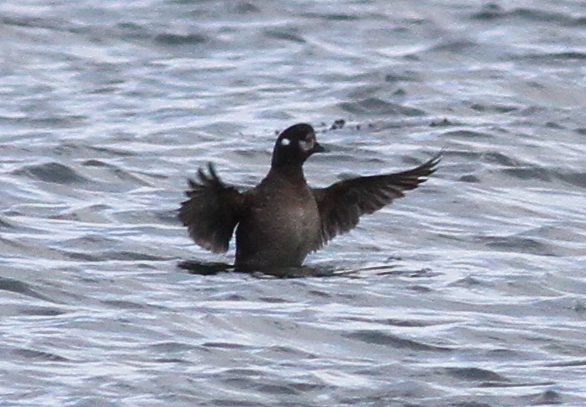 Back again on 22 February, accompanied by my friend Lorna, I scanned the area again. As the weather was quite stormy, I had the car window open just enough to see, while keeping the worst of the sleet and snow out. About 20 minutes later, just as I was about to head home, I saw the dark head of a duck with a white spot on its ear coverts for a split second. I couldn't believe it! This time it flew south, and I asked Lorna if she could see the black dot flying away. She said that she could, but this remained her only sighting of the Harlequin. 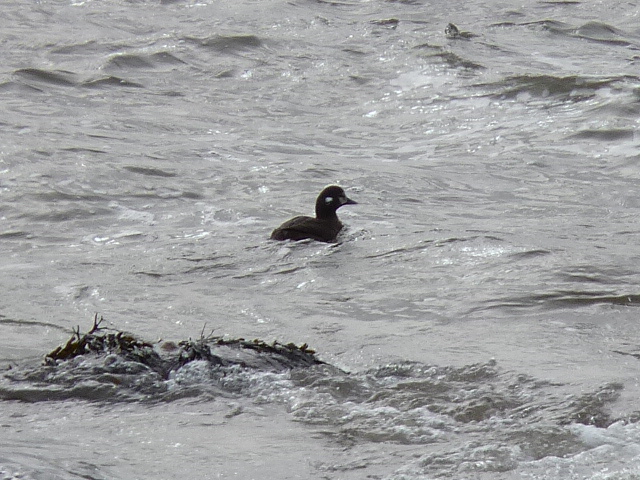 A scan of the sea revealed all the usual seaduck suspects, but still no Harlequin. Then, as I was packing my scope away, I saw it swimming along the edge of the rocks by the shore, right in front of me. I grabbed my point-and-shoot camera with my pulse racing, as I knew the bird was close enough to get a decent record shot. I started photographing when I got to the edge of the rocks, the only problem being that my hands were shaking so much that I didn't think I would manage a usable shot! When I finally checked my pictures, I saw that I had a couple of half decent — and crucially, diagnostic — images.

The Harlequin Duck was still present in the Brora area on 10 April 2015. 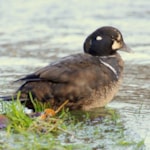