What better way to follow up a hard day in the office on Saturday than the age old pursuit of pulling weeds in the garden on Sunday? The weather, contrary to expectations, was doing its sunny best and all was well with the world. My wife had unexpectedly had to go into the office late in the morning, and so come mid-afternoon a little rest and recuperation was clearly called for.

We are both keen golfers, enjoying both the sporting challenge and the environment in which it is played. And so it was that we decided to pop a few miles along the coast from Shoreham to the outskirts of Worthing for a few holes of golf on the par three seafront course at the Brooklands Pleasure Park. This little oasis in the coastal sprawl has always rather surprised me, being quite out of character with its built up surroundings - it is bordered by a water treatment plant, a garage and a trading estate. It offers a testing par three course, a pitch and putt course, a go-kart track, boating lake and more.

On Sunday 3rd April we arrived in the Pay and Display at around 15:45, paid our fees and prepared to play. Every time you set foot on a golf course you never know what surprises and pleasures nature may throw at you, but today was to prove exceptional. The course was quite busy and play was rather leisurely, so we were in no great hurry. After a steady, if unexciting, first hole followed by a bit of a wait on the second tee, my wife was a little wayward off the tee and found herself having to retrieve her ball from near the fourth green, which is adjacent to the second fairway. While doing so she noticed an "unusual" bird and attracted my attention. My first glimpse of it was over the shrubs and small trees bordering the offending green. It flew directly away from us, and the immediate impression was of a long tailed bird that seemed a bit different from the norm. I commented to my wife that I thought that it was perhaps a bird of prey, although the viewing angle was most unhelpful. And thus we proceeded to complete the second and third holes, whilst exchanging the odd comment on our fleeting observation of an unknown bird.

After another wait on the fourth tee during which we decided to play two balls each (to match our rate of play to those in front), we approached the fourth green and noticed the same bird on the ground just off the front left side of the green. As my wife's first ball was on the fairway some 20m short of the green, I walked forward to the right and we both stood and watched the bird from a range of some 15-20m. It was immediately obvious that it was not something I'd seen before. The light was a little glary and we had no binoculars, so it wasn't ideal conditions for trying to identify an unfamiliar bird. It had the long appearance of a bird of prey, and although it wasn't standing tall you could clearly see the presence of fluffy "trousers" at the top of its legs. The markings seemed most unusual with a dark back and wings, mottled with light patches, extending up onto the head; a very pale underside, chest and throat, extending up the cheeks. I couldn't be sure but it seemed that it didn't have the normal hooked bill of a bird of prey - the very pale throat and cheeks combined with the darker colour above such a small detail very hard to pick out.

Even at that distance and with an unaided eye it was most striking as it rummaged around on the edge of the green, apparently feeding. I remember thinking that this wasn't really the kind of behaviour that I would associate with a bird of prey as it appeared to be feeding on grubs, worms or insects. However I was mindful of a Buzzard we had seen on a golf course in Devon at New Year which had also been apparently feeding on the ground near two greens, and so I felt there might be a precedent. At this point I was cursing the lack of lack of optical equipment whilst trying to memorise what I was seeing, but thinking to myself that it was probably some bird of prey with which I was unfamiliar (I can only really claim to have seen Kestrels, Buzzards, Red Kites and eagles of some sort whilst skiing in France). Eventually we had to approach the green and away it flew, again directly away from us, offering only a tantalising suspicion that the tail just didn't look quite right for any bird of prey I had seen thus far (it made me think of something tropical like a parrot/parakeet/macaw) - it seemed too long and slightly wobbly.

After completing the fourth hole we again had to wait on the next tee. Whilst surveying the scene we noticed that the bird had now alighted on the edge of the third green, and as some players approached it took to the air again. This time as it flew away the tail was presented in such a way that the tip appeared very rounded, before flying off inland to the north. It was at this point that I made the connection with a female cuckoo in rufous plumage that I had seen at quite close quarters in Green Park in London some years ago. It all seemed to fit - something that looked reminiscent of a bird of prey, on the ground, with a long rounded tail. I couldn't for the life of me remember the colouring of a cuckoo in normal plumage, but I assumed that was what it probably was. I couldn't wait to get home and check my bird books!

When we finally reached home and I examined the books, well what a surprise! There was only one bird that seemed to match, a Great Spotted Cuckoo, a bird I didn't even know existed. I showed the picture to my wife and she agreed, that was definitely what we saw. It was marked as an accidental/rarity in Britain, so my immediate thought was that we must be somehow mistaken. I was very keen to find out if it was what it seemed to be, and knowing that there are a lot of keen-eyed enthusiasts out there, many of whom probably use the Internet, I promptly got myself online. Not being familiar with the birdwatching community and their websites I did the obvious and put in a Google search for Great Spotted Cuckoo Worthing, not really expecting anything. Imagine my surprise, if you will, when I found an immediate match on the www.birdguides.com pages from someone in Shoreham who had also seen one. At least it seemed to confirm our identification.

I promptly penned an email to my sister in Devon (with whom we had seen the aforementioned Buzzard) to impart the news as she is also very interested in birds. This turned out to be a rather frustrating exercise as my email has been playing up, and Sunday drew to a close with a communication breakdown. By Monday evening, after a day at work, I was determined to have my email delivered and after some thought it had occurred to me that I probably ought to report the sighting - others would surely want to view the bird too. After various failed attempts to get my email sent I again visited the BirdGuides website and delved a little deeper. Unfortunately my email wasn't working. Oh how frustrating! Finally, on Tuesday evening, I got my email working again and the report was duly submitted. The rest, as they say, is history!

How nice it has been to see the wonderful pictures of this most striking bird published on the BirdGuides website and to be able to share our find with birdwatchers from near and far who have travelled to see this rare cuckoo.

Great Spotted Cuckoos are extremely rare visitors to Britain and Ireland and there had been around 45 British and Irish records prior to this spring. The species breeds in southern Europe, southwest Asia and Africa, and winters in Africa. Great Spotted Cuckoos are migratory at the northern and southern ends of their breeding range, but in between are resident or make short-distance movements. European and Asiatic birds are believed to winter in Africa below Sahara. Return movement in North Africa and southern Spain is evident from early February with the main spring passage March to mid-April, which correlates nicely with the majority of British records, relating to overshoots under a favourable southerly airflow.

For all previously accepted records of Great Spotted Cuckoo, see: Great Spotted Cuckoo records. There have been 3 previous records for Sussex, in 1918, 1967 and 1990, the last of which was at Shoreham-by-Sea from 4th April-1st May 1990.
Written by: Pete and Miranda Des Moulins 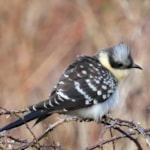