Plans for Sunday 13 July 2014 were curtailed by torrential rain during most of the afternoon. By the early evening, the rain had eased and I was looking forward to watching the Argentina versus Germany World Cup final in the evening. However, with a little spare time beforehand, I realised that I hadn't got any recent counts for Common Redshank and Bar-tailed Godwit at Breydon Water, so I decided to spend an hour or so on the rising evening tide along the south estuary wall.

Arriving on site at approximately 6 pm, I noted that the tide was very low, with all the mudflats exposed, but it was starting to rise. Only a disappointing four Bar-tailed Godwits were found, but in order to count the redshank, I needed to walk along the estuary wall for about half a mile. Greenshank had increased to at least 11 and up to three faded black Spotted Redshank were with them. Flights of Common Redshank were now appearing from the west as the rising tide pushed them towards the higher mudflats at the eastern end of the estuary.

Numbers seemed impressive for the time of year, and I began to count in earnest. I had just passed 300 and was nearing the end of the flock when I noted what was obviously not a redshank. I think it would have been number 317, but having finished the count on 328 Common Redshank, I quickly returned to this very distant bird. As it had its back to me for most of the time, and was alone, I initially thought for a second or two it was the first returning Ruddy Turnstone of the autumn. This notion was soon dispelled as a redshank walked close by, enabling me to determine its true size. Turning around slightly, the bird revealed a very Knot-like appearance, but was very long winged and had an obvious well-marked darkish mantle. What was unique was the very dark breast markings merging to form a distinctive pectoral band, which at times appeared blackish and contrasted exceptionally well with the whitish underparts. 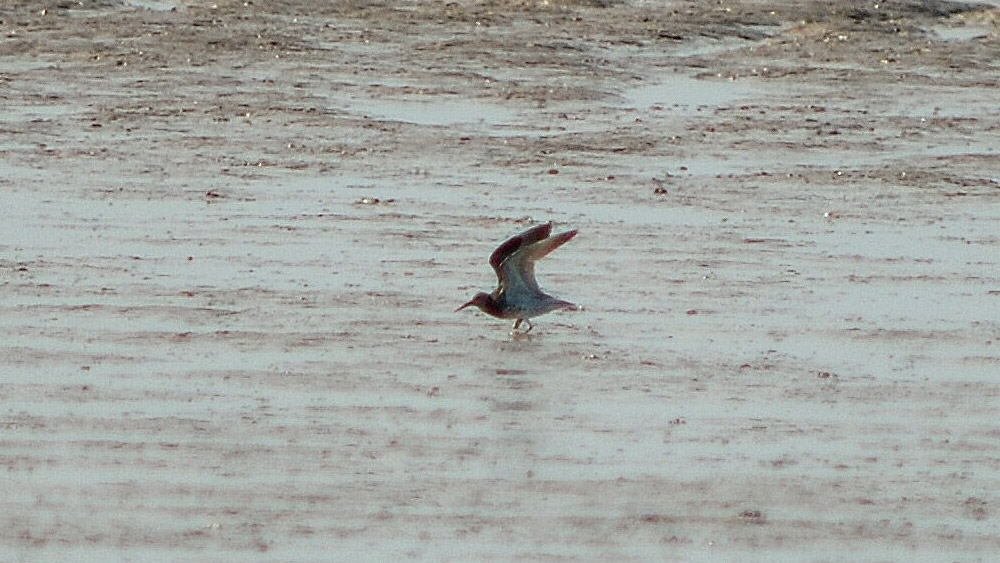 Although still very distant and despite poor light conditions, the bird certainly had the appearance of a summer-plumage Great Knot. I previously had experience of this species in Australia, although unfortunately none of the birds I saw was in full breeding plumage. It was only from photographs that I recalled their summer plumage characteristics. The only waders close by were Common Redshank and it appeared to be only slightly smaller.

The more I looked at it, the more I considered that the distant 'dot' could be a Great Knot. Having pondered over the identification for a few minutes, I quickly decided to phone wader enthusiast Keith Dye who was the nearest available local birder. Some panic had obviously set in by then, as I said: "Don't bother to walk, just get a taxi – I think I may have a summer-plumaged Great Knot on Breydon." This was at 7.45 pm and Keith arrived very shortly after, having obtained a lift with his partner.

Light conditions were getting worse and the bird was still relatively distant, but I managed to put Keith onto the bird very quickly. It had moved a little closer to the main channel area, and was looking more like a Great Knot than ever. The white underparts and the distinctive dark pectoral band were obvious, together with distinct markings on the mantle and slightly paler facial patterning; there really was nothing else it could be. However, it was difficult to determine any characteristic dark flank spots. Keith was looking through my telescope when it flew a short distance and he had good views of a white rump and dark grey tail, further confirming the correct identification. Fortunately, two summer-plumaged Knot joined the bird, and although its size was only marginally larger, it had a very attenuated rear end. The bill was obviously longer than Red Knot and was slightly downcurved. As the tide rose, the bird moved further away, and with fading light, we both reluctantly left it as a mere speck in the distance. 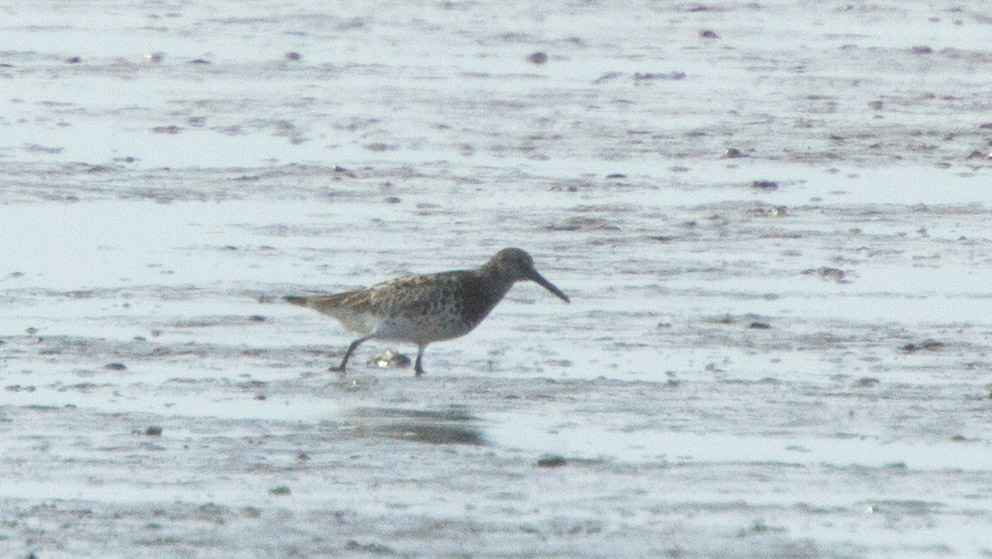 After considerable deliberation, we both decided to release the news late that evening and hoped that the bird would stay put. We partly delayed because what was believed to be a winter-plumaged Great Knot, initially found by Ian Smith, on 29 May 2009 proved unconfirmed and became well known as the 'Breydon Great Dot' (see Birdwatch 205: 63). Also, had we made an incorrect ID, a great many birders would have missed the World Cup final.

After a sleepless night, several groups of Norfolk birders were out on Breydon south wall from 4.30 am onwards. The tide was well out and many of the wading birds were feeding towards the western end of the estuary. Phil Heath was the first to locate a very distant wader that fitted the description of the previous evening's bird. It was still present and a considerable amount of elation was felt, but certain identification at this range was not possible.

However, as the light improved and the wader moved nearer, it became clear this was indeed a summer-plumaged Great Knot, a first for Norfolk and the fourth for Britain. News was released at 6.06 am, by which time we had also seen the bird in flight, revealing a startling white underside to its very long wings, and a white rump and uppertail feathers. It flew down the estuary towards the Great Yarmouth end and began feeding slightly closer, giving reasonable views.

Birders from all over the country were now beginning to arrive, and as the tide pushed the bird close to the saltings, views from the opposite eastern bank proved excellent. For a period, it fed alongside two breeding-plumaged Knot, giving observers the chance to make comparisons. The Great Knot certainly appeared to be in full summer plumage, apart from lacking chestnut markings on the mantle, although several observers mentioned that these were just visible under certain light conditions. The spots on the lower breast were now obvious and these extended lightly along its flanks. 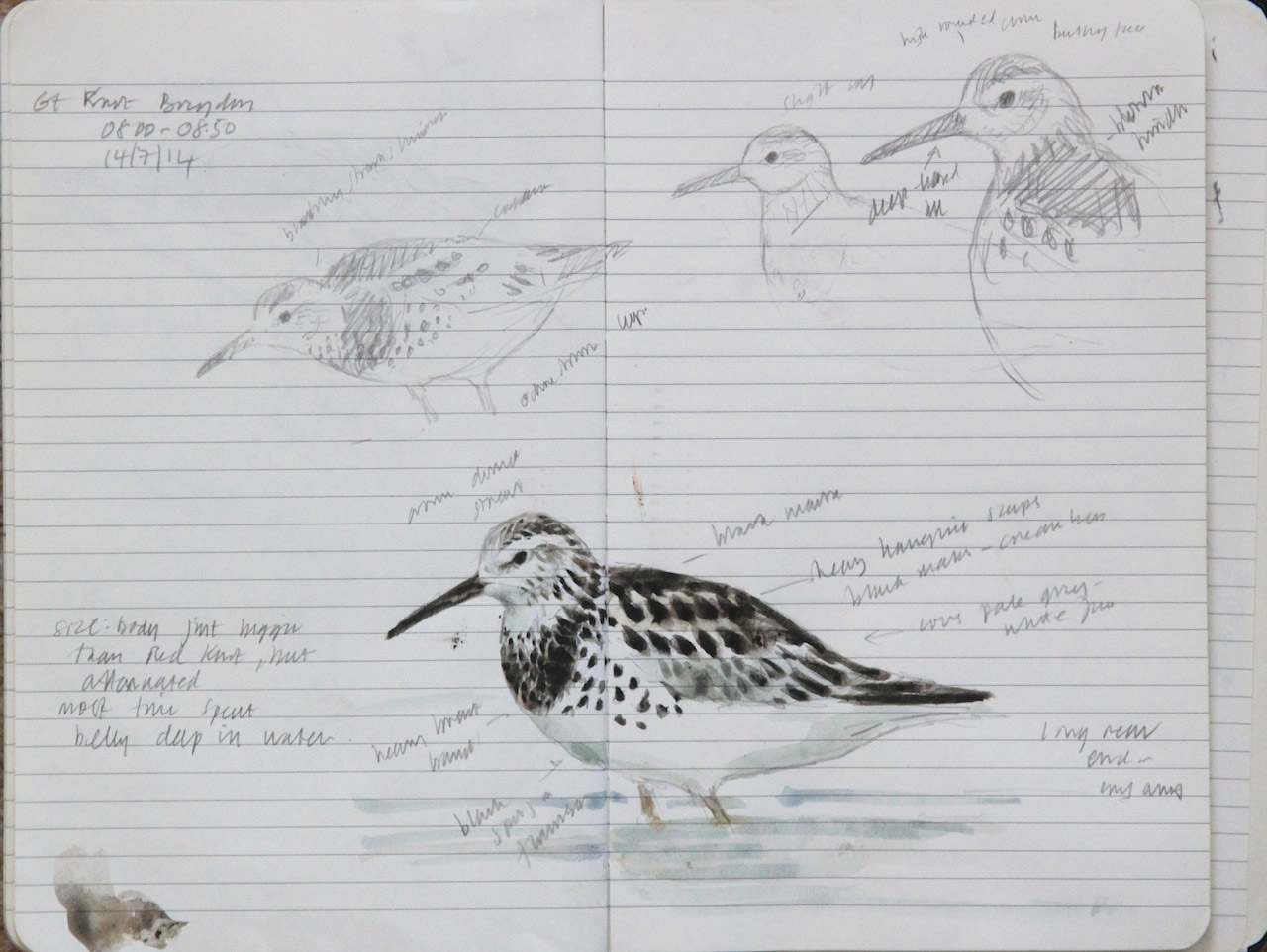 With distant birds, prolonged observation can often aid the artist over the photographer (Brian J Small).

By late morning, the bird had gone to roost out of sight on the saltings at the eastern end of the estuary. It was only very occasionally seen in flight at high water, but returned to the mudflats on the falling tide in the early afternoon, to the delight of the many hundreds of gathered birders waiting anxiously on both sides of the estuary. For the rest of the day, it allowed distant views on the north flats, but for a while fed on the south wall flats giving much closer views and allowing many photographs to be taken.

The Great Knot remained present the following day and kept to its normal pattern of following the tideline, usually feeding by itself and then roosting at the Yarmouth end out of sight on the saltings for several hours, only for it to then reappear as the tide dropped. By the evening it was again giving good viewing opportunities from the south and north walls to the gathered crowds, some even having come from abroad to see it. 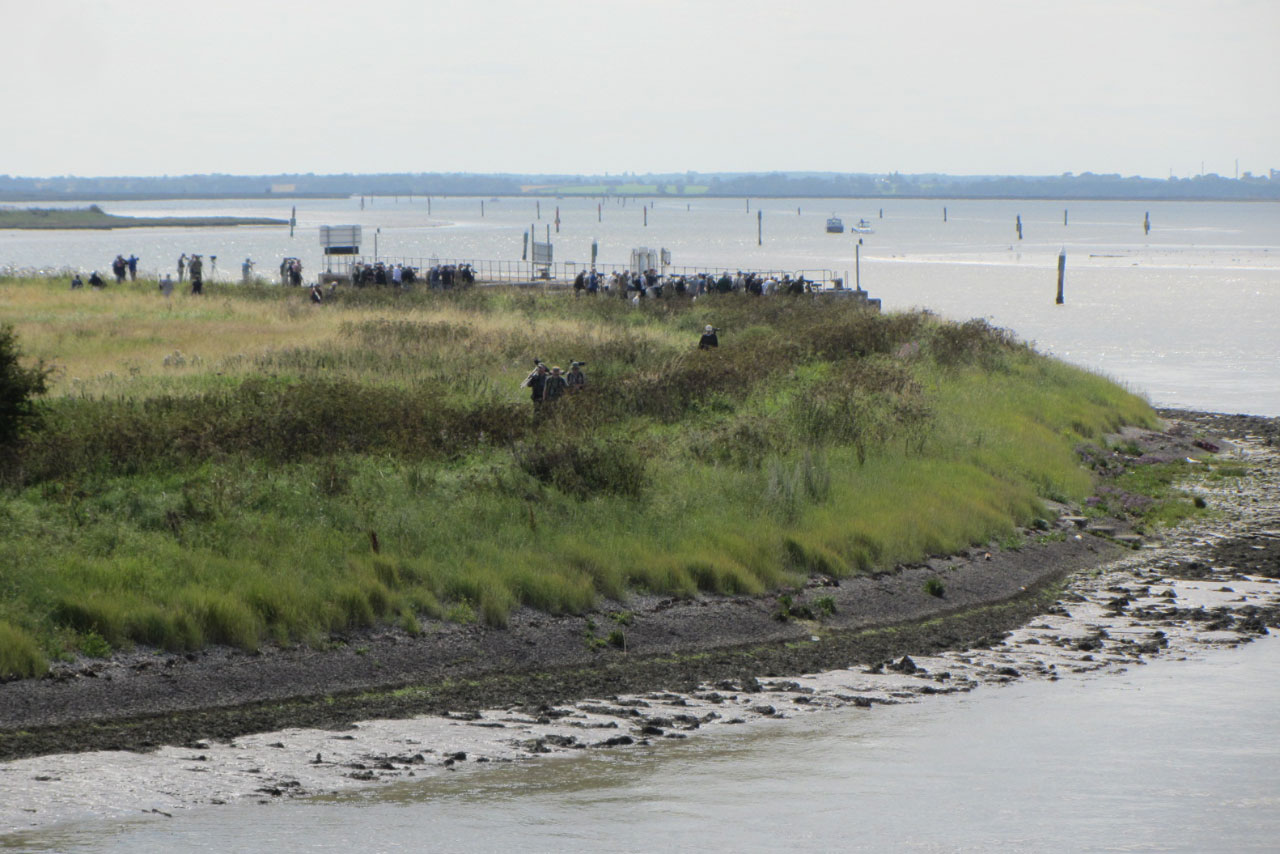 With pressure rising, Tuesday night provided clear skies with little wind and the Great Knot departed. The bird was seen by many hundreds of birders during its three-day stay, all obviously delighted at seeing this great rarity, the first since the Lancashire bird of July-August 2004, and the first truly twitchable individual since the one in Co Durham in autumn 1996. Everyone behaved impeccably and there were no problems with car parking, despite the sudden arrival of numerous vehicles from all over the country.

Although I missed most of the World Cup final, finding Britain's fourth Great Knot was excellent compensation.