As a wildlife photographer, I thought in the late afternoon of 14 April I would spend some time at the Isles of Scilly Bird Group Hide on Lower Moors. Over the previous few days, dense fog had descended on the islands, but as I approached the hides the sun was starting to break through.

At 6.45 pm, I was looking out of the hide onto the misty scrape, but there were no notable photographic subjects. I had been in the hide for 10 minutes, when two large herons silently flew in and landed on the scrape in front of me. I immediately noticed that one of the birds was a Grey Heron, but the other heron was noticeably larger in size and darker in colour. I paid more attention to this individual as it struck me as something different — I had never come across a heron like this before.

For the next 25 minutes the smaller Grey Heron remained agitated and flew aggressively towards the larger bird, pushing it around the scrape. On a few occasions they flew out of my field of view, only to return again. Both birds were vocal and five minutes more of this aggression was enough to make the other heron fly off out of sight.

Very shortly afterwards a birder burst into the hide. He was very excited and overwhelmed and he asked me if he could review my images that I had taken with my camera. He looked closely at my shots and said he was 90 per cent sure that it was a Great Blue Heron from North America, and only the second sighting ever to be recorded in the UK! 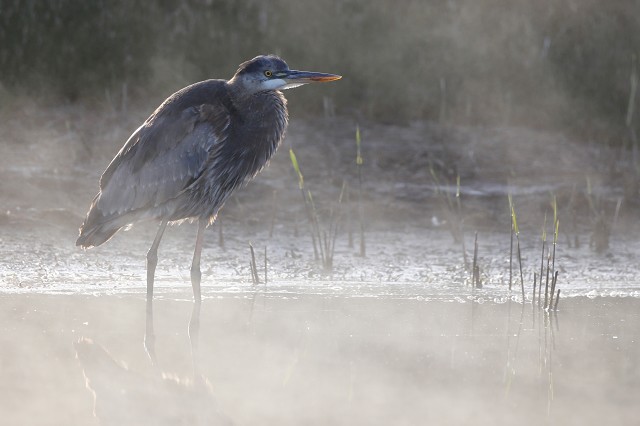 One of the first shots of the Great Blue Heron, taken at a misty Lower Moors (Photo: Cavell Smith)

Wow! I had known it was something of interest, but I didn't think that this bird was going to be as unusual and rare as that. The birder introduced himself as Ashley Fisher and then called another local birder. He then returned to the hide but spotted the heron flying off south towards Old Town Bay. Shortly afterwards, Nigel Hudson arrived in the hide and he also looked at my images, but neither of them were 100 per cent convinced. They sped down to Old Town Bay to search for the heron and the rest, as they say, is history.

Afterwards I looked at my metadata, and noted that I had observed the Great Blue Heron from 6.56–7.30 pm, a total of 34 minutes. The heron in question was still being considered locally as a possible Great Blue Heron by resident birders, but soon the identification was confirmed, the bird being aged as a first-winter. This Great Blue Heron was discovered in virtually the same spot as Ashley had found the first in December 2007!

Later, I heard that Bob Dawson and Graham Gordon had seen an interesting heron on St Agnes early on 13 April. Having considered Great Blue Heron, they managed to talk themselves out of it in the fog. Any claim of Great Blue based on their limited views and the apparently atypical thighs, would have been dismissed. To say then that these observers were relieved to catch up with the heron would be an understatement!

Seeing the bird was a fantastic experience, and was certainly the cherry on top of my photographic day.